When a galaxy far, far away made its first foray into the world TV, it became an instant hit. The mysterious Mandalorian warrior and his equally mysterious bounty, known only as The Child, became an internet phenomenon. The secrecy behind The Child is why it’s taken so long for products featuring the Yoda-like creature to arrive. There are a number of LEGO products based on The Mandalorian, including an all-new BrickHeadz set, featuring The Mandalorian and The Child. Ahead of the set’s release this weekend, I’ve given it a build and here’s my review. Read on as this is the way…. 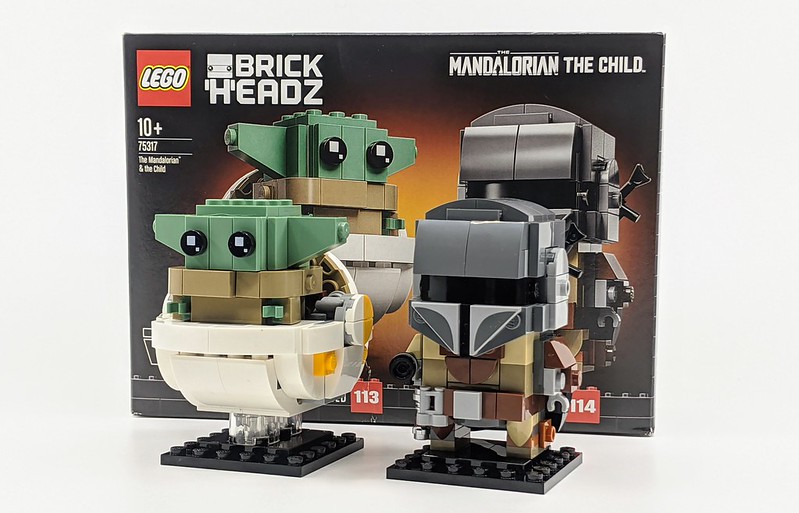 Inspire memories of epic Star Wars: The Mandalorian stories with this fun building toy for creative kids, featuring LEGO® BrickHeadz™ versions of The Mandalorian and the Child (75317). Fans will appreciate authentic details such as The Mandalorian’s signature weapons – a blaster rifle and a blaster pistol. The Child has adjustable ears to create happy and sad expressions, and it sits in a hoverpram ‘floating’ on 4 transparent LEGO elements. 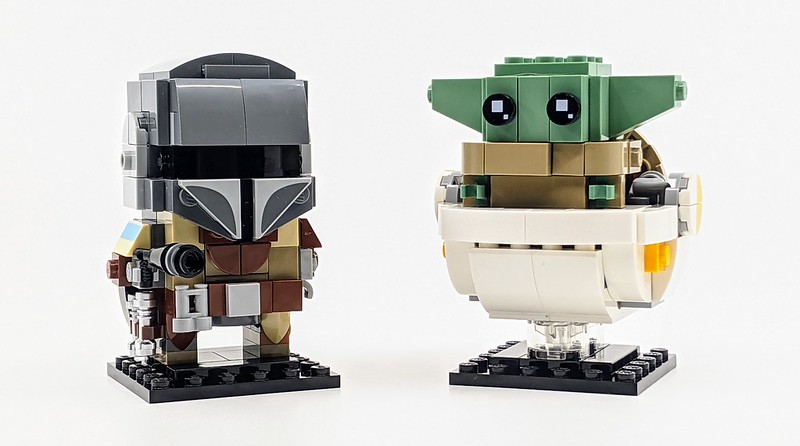 The BrickHeadz made their debut in 2016 as a collection of Comic-Con exclusive sets, which introduced this unique new collectible theme. Over the years, the range has transformed iconic characters into stylised brick-built figures. In recent years BrickHeadz releases have slowed a little but they are still appearing every so often and have been dusted off for a set based on the popular Disney+ series The Mandalorian. The set features title character, The Mandalorian and his mysterious cargo dubbed by the internet as ‘Baby Yoda’ who is officially known as The Child. It’s one of only a few double packs to include a smaller ‘Buddiez’ character alongside a standard BrickHeadz figure. 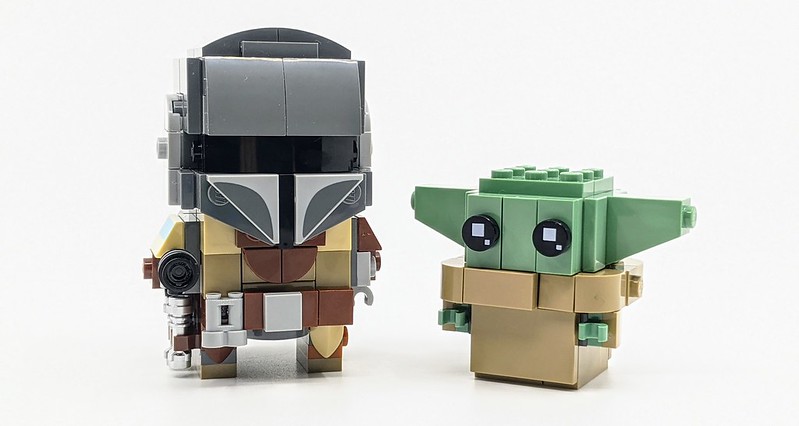 Unlike these other double packs, The Mandalorian one also includes The Child’s hoverpram. This is what you construct first and although it appears to be a little lighter in colour compared to the one featured on screen, it’s a nice addition to the set. The various curved, bow and sloped elements help to give it a nice futuristic appearance, which nicely frames The Child figure. 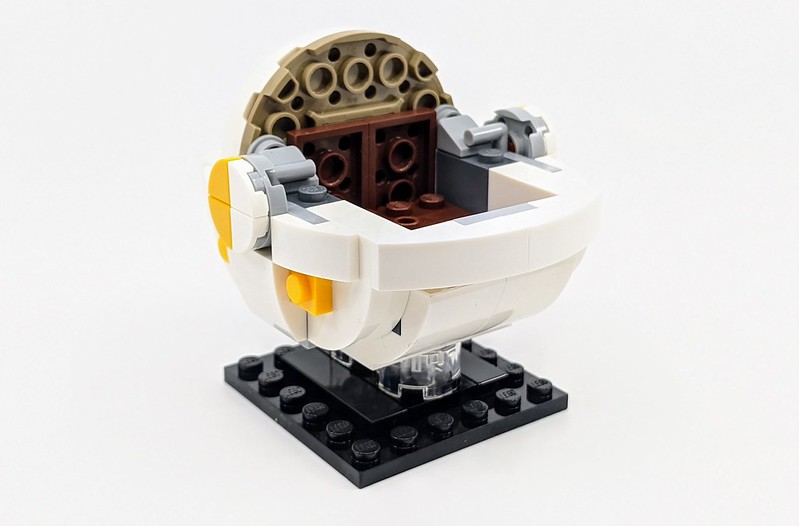 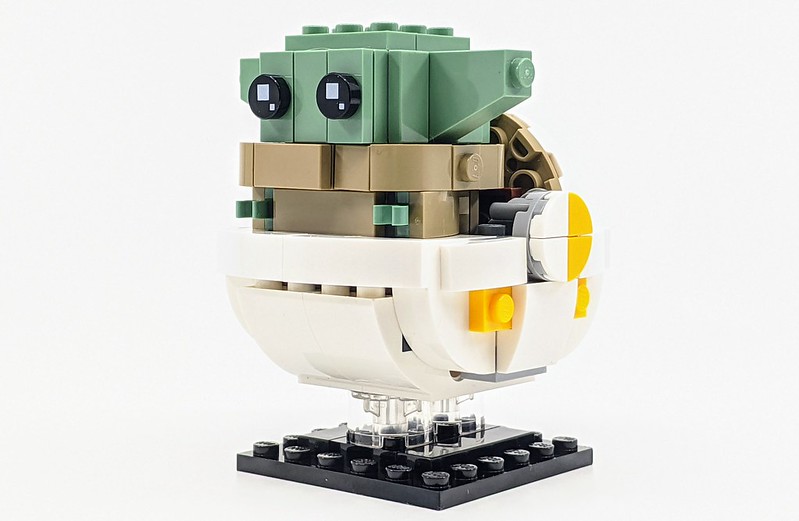 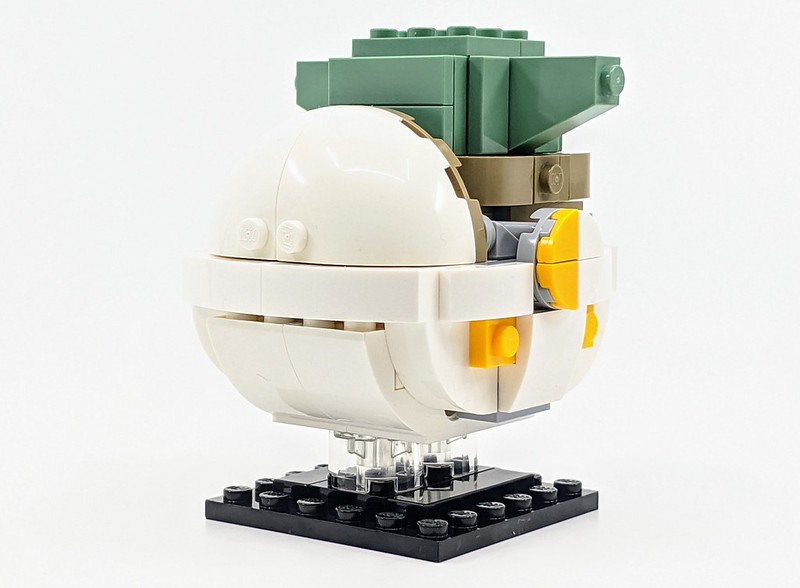 Even if you aren’t a Star Wars fan, you’ll have undoubtedly heard of The Child, more so by its ‘Baby Yoda’ nickname. Although this new character looks similar to the famed 900 years of Jedi Master, it’s merely part of the same species. Which even after 40 plus years and countless expanded universe content, remain a mystery. Whatever The Child is, it certainly makes for a cute little BrickHeadz character. Although built on a smaller scale to the standard versions, it still features the same cubic appearance. Even after 4 years and over 100 sets, the BrickHeadz all still include a pink ‘brain’ with The Child hiding a smaller 1×1 pink stud. Even though The Child is much smaller in scale, many of its details are nicely captured, I especially like the way it’s bulky robes have been done and the oversized ears. 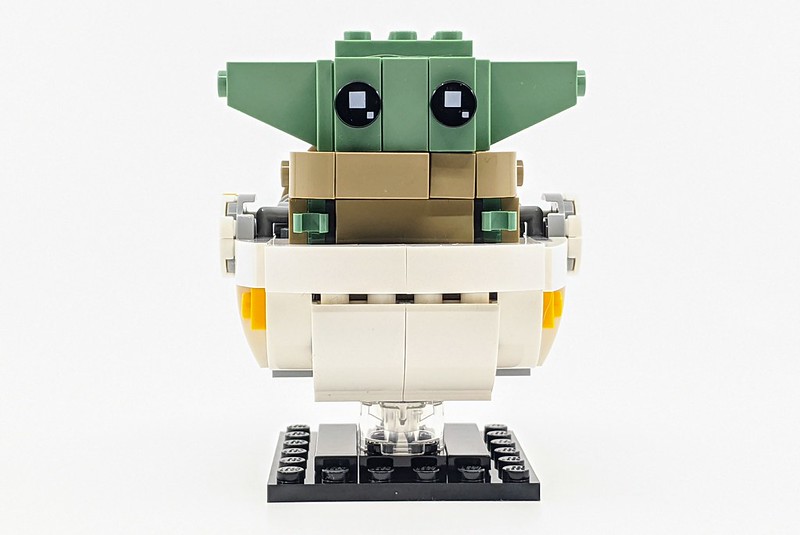 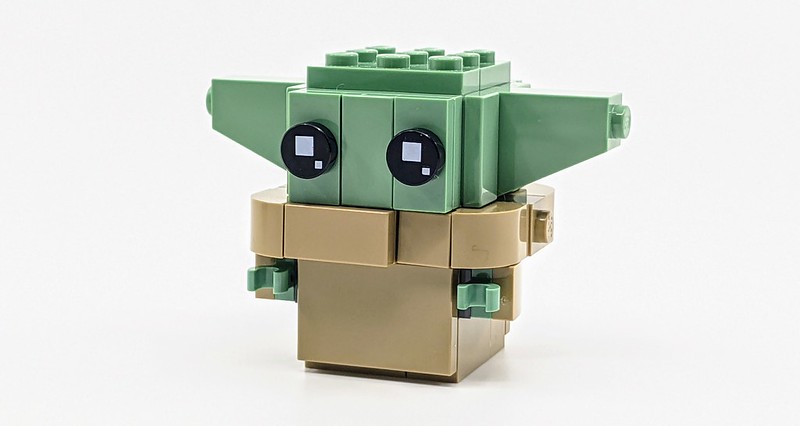 The Mandalorian may not seem as chunky as his little green chum, once placed in his hoverpram, but there is still a lot going on with his construction. Much of the internal build is similar to other BrickHeadz with a variety of 1x2x2 bricks, offering a great surface to clad much of the details. One thing usual for this particular character is how that famous Mandalorian helmet is created. The angler section near the mouth area of the helmet is created by two completely separate pieces. These are then placed, unconnected to any studs, into a gap, which is then surrounded by the rest of the helmet. It’s a clever way to recreate the iconic bounty hunter helmet. The rest of the Mando’s outfit is created with various element shapes and colours. They do a great job of showing the outfits original look before any Baskar Steel was added. 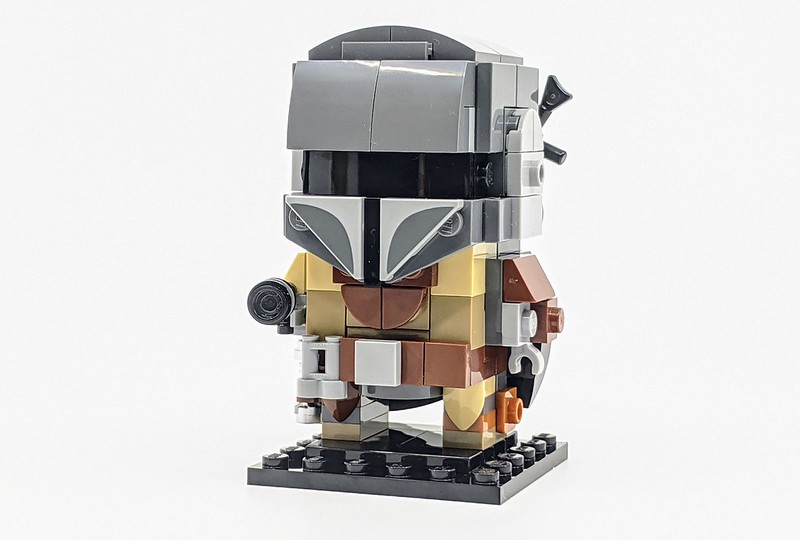 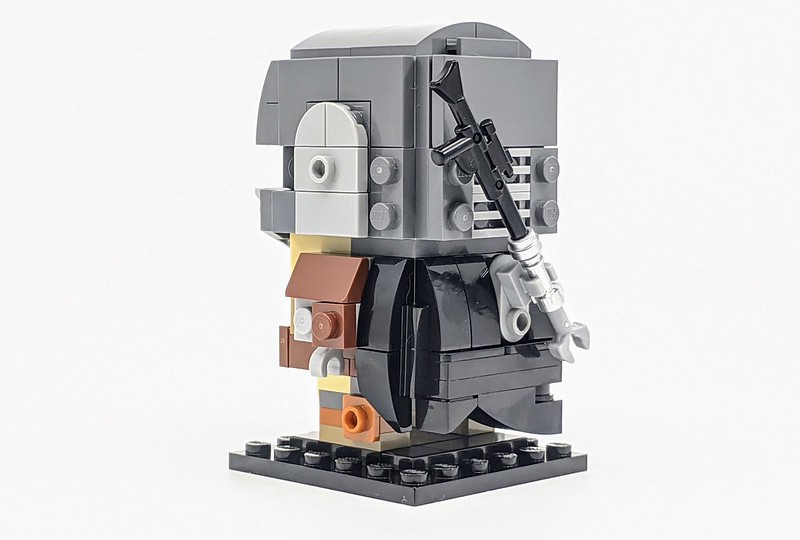 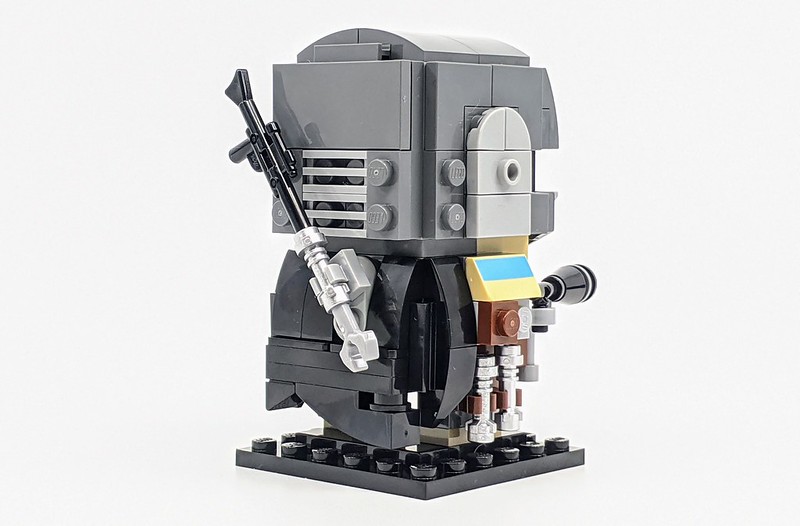 With The Mandalorian having such a cultural impact, it’s no surprise characters from the show have influenced a few LEGO sets. Beyond the previously released Raider AT-AT and the upcoming Razor Crest playsets, a BrickHeadz set seems a fitting way to portray The Mandalorian and The Child characters. If you’ve built any previous BrickHeadz, then there isn’t really anything new in terms of the build. The hoverpram is a welcomed addition and it fits the style of the BrickHeadz, despite being rather curvy.