When they aren’t crashing into trees at high speed or punching Force-sensitive younglings, Scout Troopers are loyal soldiers of the Galactic Empire. They first appeared on the forest moon of Endor, where they took chase to Leia and Luke on Speeder Bikes. Their penchant for speeders earned them the Bike Scout moniker. After the Imperial Stormtrooper and TIE Pilot, they are one of the original class of troopers making their unique helmet the perfect choice for the latest addition to the LEGO® Star Wars Helmet Collection. Here’s my final review of the new LEGO Star Wars sets, as I take a look at the Imperial Scout Trooper Helmet. 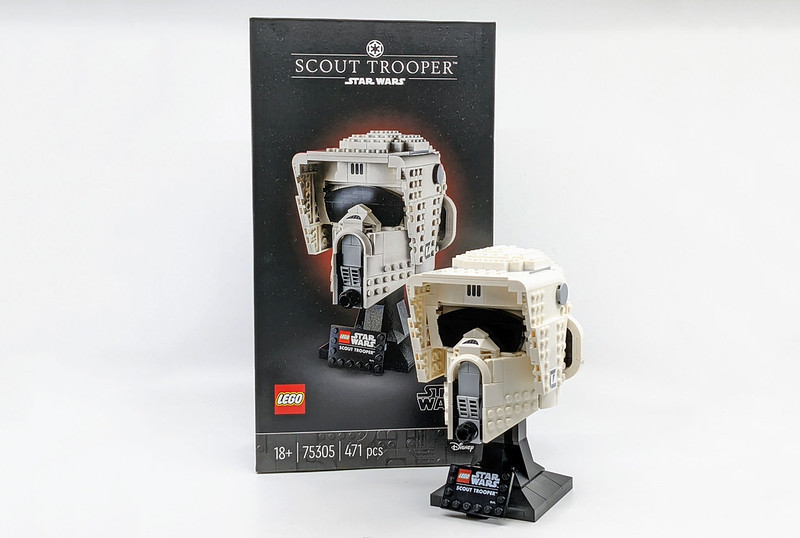 Test your construction skills and recreate memories of epic Star Wars™ scenes as you build the Scout Trooper Helmet (75305). A complex LEGO® Star Wars building set offering a fun, creative way to unwind, every contour and detail of the helmet is beautifully recreated with LEGO bricks. This Star Wars collectible has a display stand with a nameplate to complete an eye-catching centrepiece for the home or office. And look out for the other new-for-May-2021 LEGO Star Wars build-to-display helmet: Darth Vader Helmet (75304). 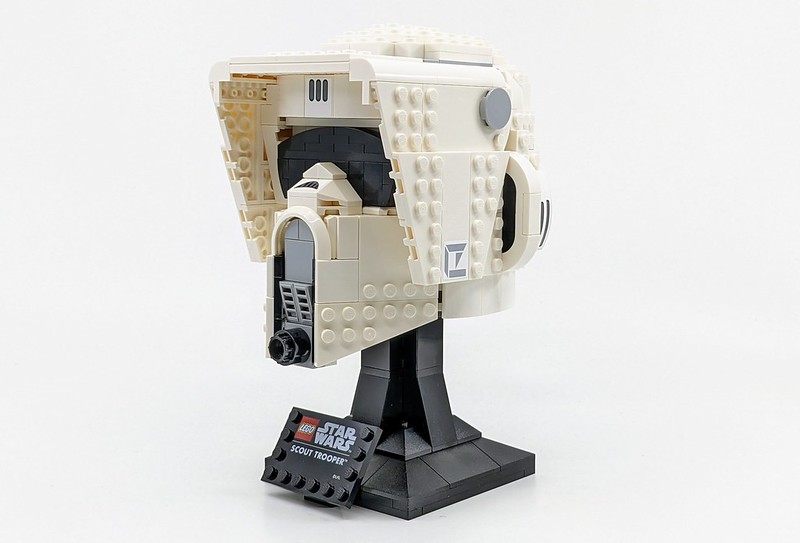 All of the other displayable Helmet builds begin with the stand, but that’s not the case with the Scout Trooper. Instead, you start on the helmet and in another break from familiarity, the innards of the Scout Trooper are quite sparse. As this fraction of the Imperial Army is kitting out in lighter armour, their helmet is also the most unique. Stormtroopers, TIE and AT-AT pilots all have a similar aesthetic to helmets, something which is not followed by the Biker Scouts. This less curved appearance is why the core of the helmet is far less complex than other builds. 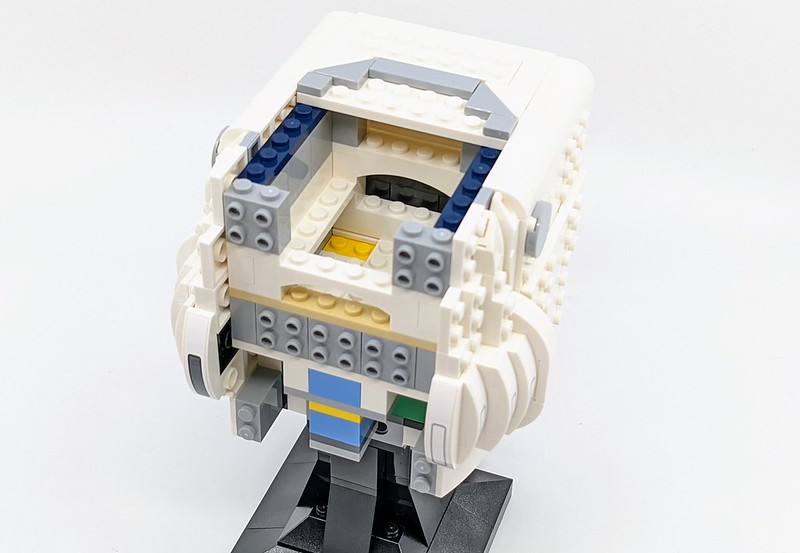 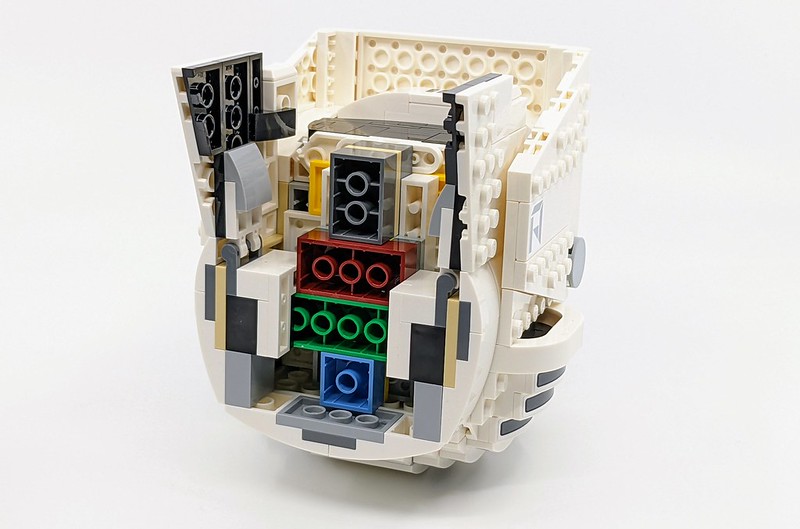 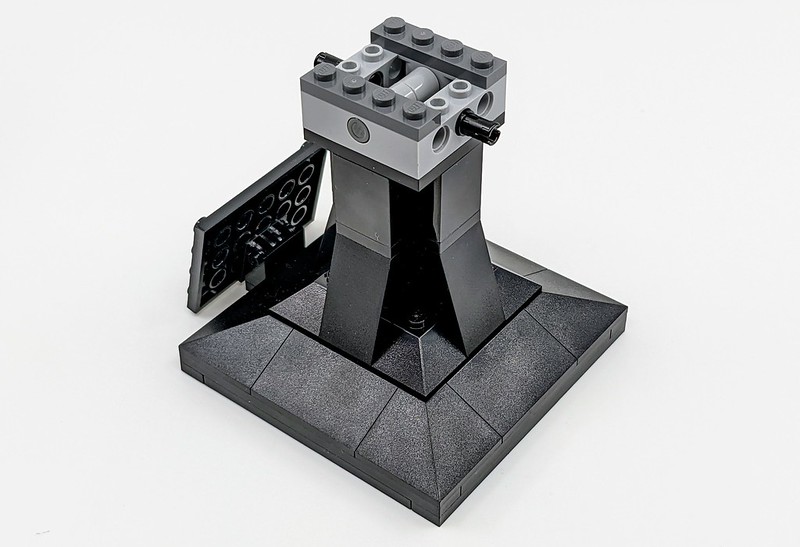 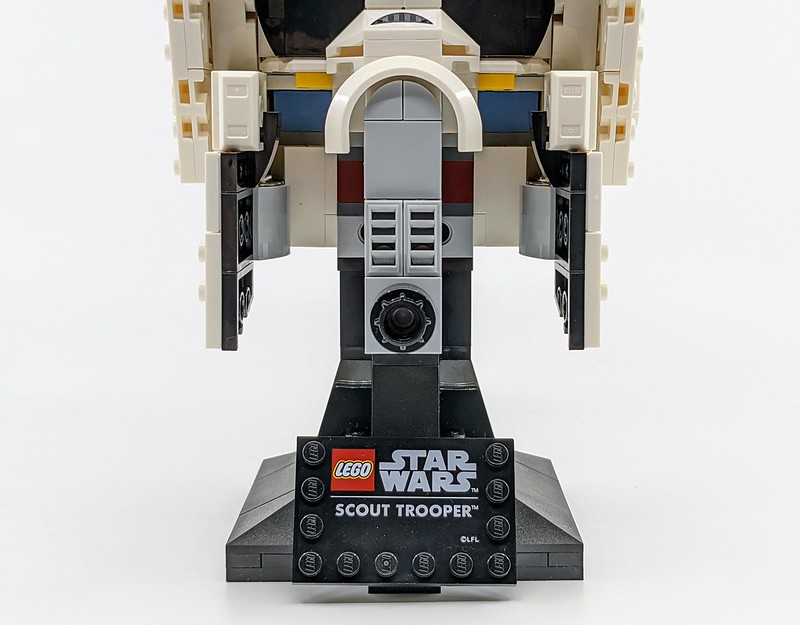 Instead, much of the build is focused around the shell of the helmet. The Scout Trooper has a singular section for the visor, which is simply created by stacks of bricks and curved plates. Once the surround of this piece is added, the visor is nicely held in place. The original prop helmet for the Scout Trooper, allows the entire faceplate to flip open. Although the LEGO version doesn’t offer the same function, the design has still had to incorporate the line of the join. 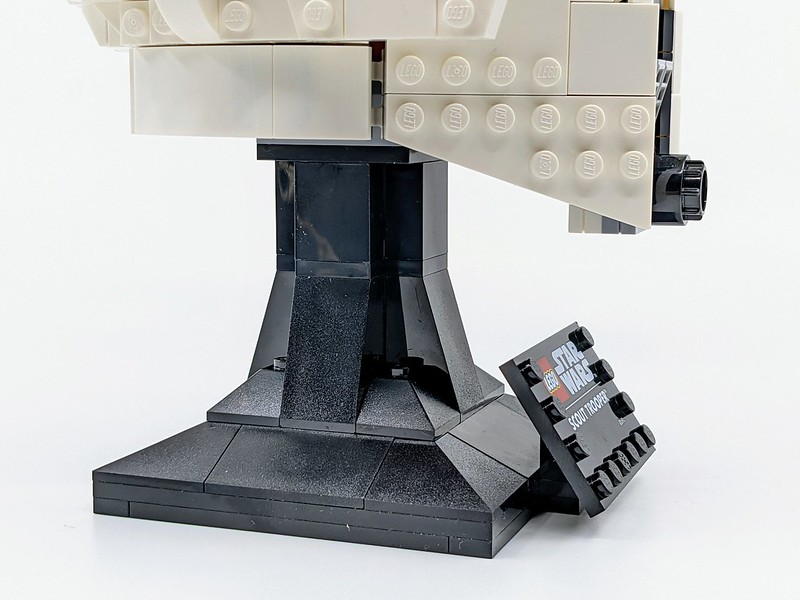 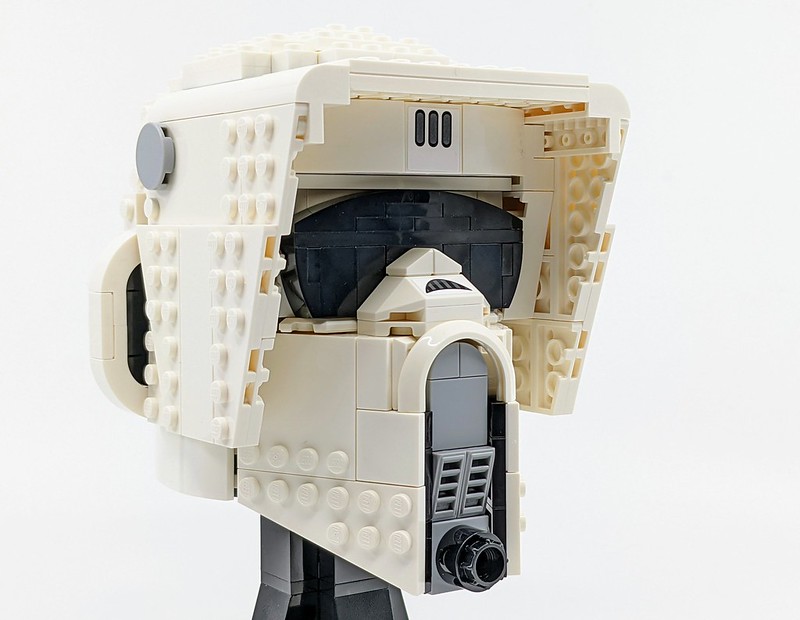 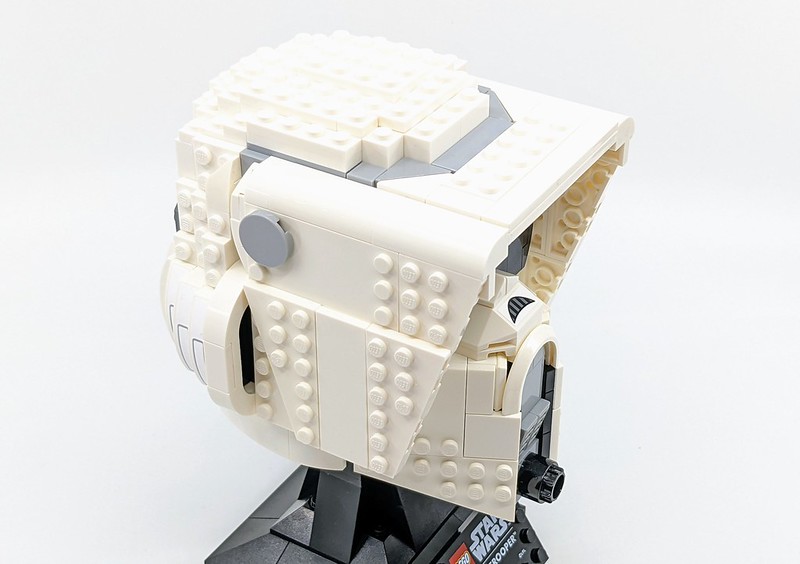 The rear of the helmet is a little less defined, the prop helmet has a really smooth semi tube-shaped section, which has slots cut into it. At the scale of the LEGO version and of course the LEGO elements used to craft it, the appearance is a little different. The curve is stepped and the slots have been recreated with stickers. In fact of the two new sets, this features the most sticker details. With additional stickers on the faceplate of the helmet, including a very tiny ‘mouth’. I still think that these sort of ‘high-end’ builds, with a focus on display, should use printed elements. I understand not all pieces can have print added to them but if the entire 4+ range can do it, I’m sure it’s possible with the 18+ sets. 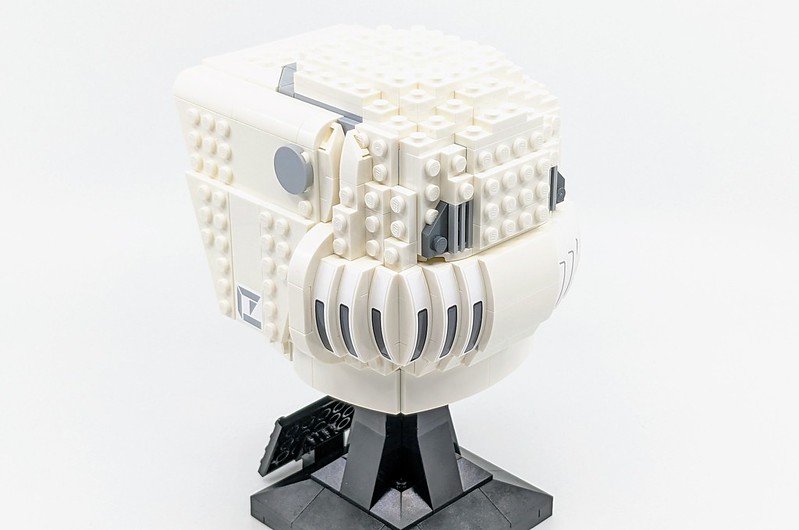 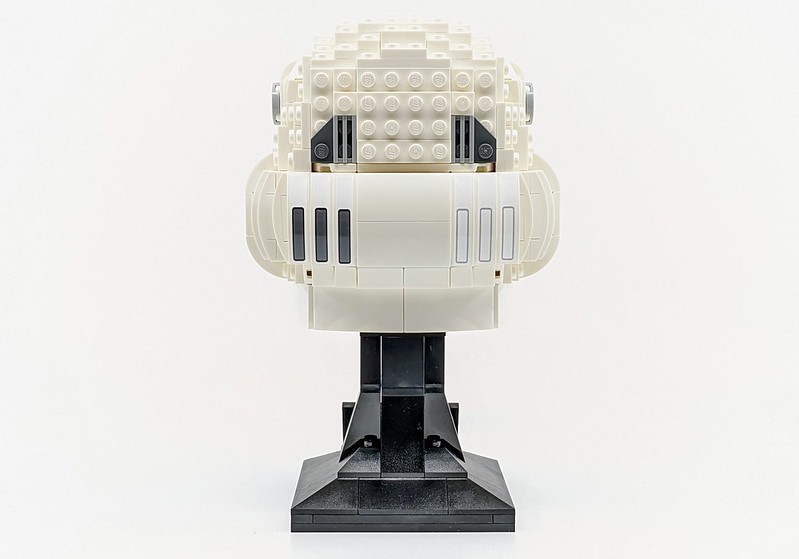 Despite the number of stickers, the finished set looks great and captures the appearance of the Scout Troopers helmet really well. Even with the helmet being largely white in colour, there are enough little details to break this large mass of colour up. Once its connected to its display plinth, it looks even better. 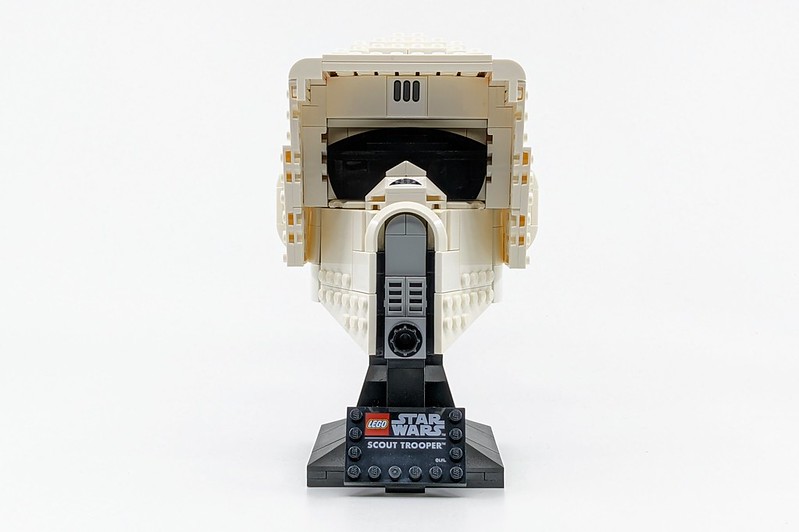 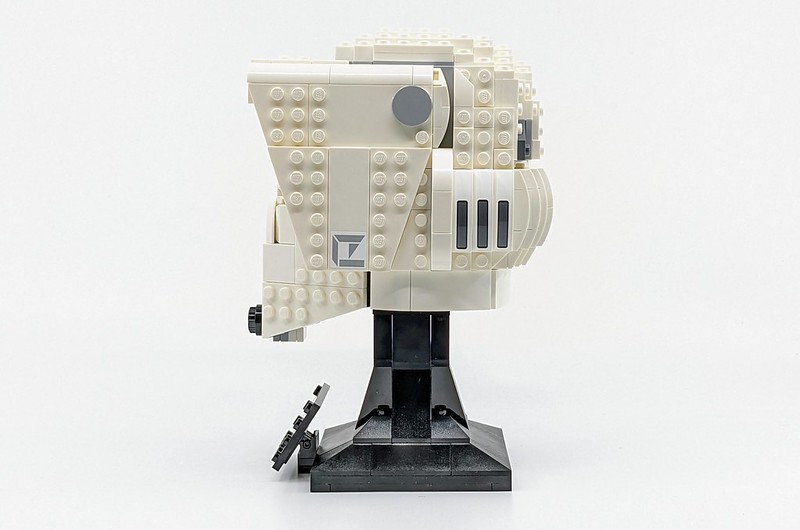 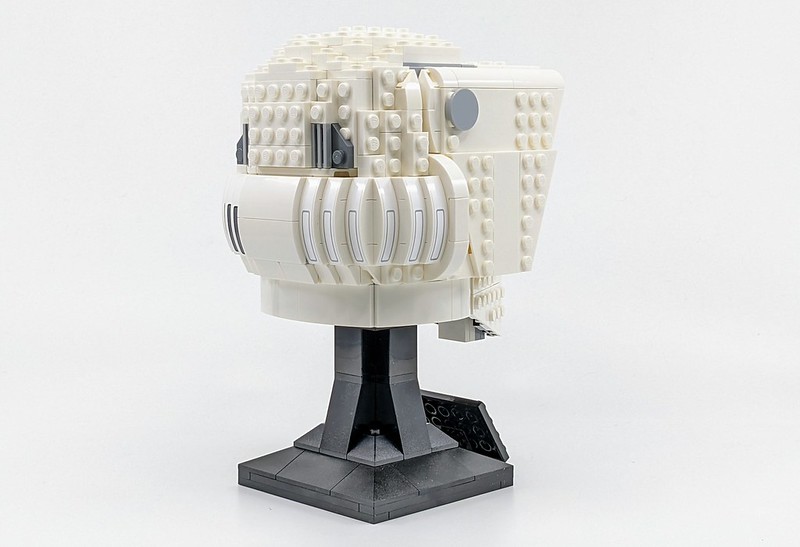 As impressive as it is to achieve the curved appearances of the other helmets in the range, this set has a far more tricky job of achieving a unique looking design. The straight aspect of the visor lip and the enclosed faceplate aren’t the easiest things to replicate with LEGO bricks, but it has mostly been achieved. After building all the ‘Helmet Collection’ sets, I enjoyed the fact these tackled the build in a different way, although the overall experience is fairly similar. I still think a Minifigure character should have been included. The LEGO Star Wars Design Team did entertain the idea during the development of the sets but felt they distracted from the focus of the set. I’ve added Minifigures to the other sets and they cool quite nice, so it’s easy enough to do the same should you so wish. But as the build you get in the box, this is a decent addition to the range and as with the iconic helmet of Vader, the Scout Trooper is part of the original Imperial troopers classes so it’s expected they would be the focus of the set ahead of Clone Trooper or Sith Eternal Troopers.