It’s been stripped by Jawas, attacked by a Ravinak and picked up plenty of carbon scoring. The Razor Crest has been transporting the Mandalorian across the galaxy, collecting bounties and keeping a certain green child safe. So it’s no surprise that the Mando’s ship has been given the LEGO® treatment. Now you may have seen there is a little confusion concerning the ship’s name in LEGO form. Despite being called the Racor Crest, the LEGO set has had to be renamed the Mandalorian Bounty Hunter Transporter. This is because a sneaky German company has trademarked the name between the US and European airing of the Disney+ show. There is no doubt Disney will fight this but for now, the LEGO set is the Razor Crest in all but the name. Make sure you’re stocked up on Carbonite units, charge the Amban Sniper Rifle and grab a warm cup of soup as you settle down for my review of the LEGO Star Wars Mandalorian Razor Crest set – I have spoken. 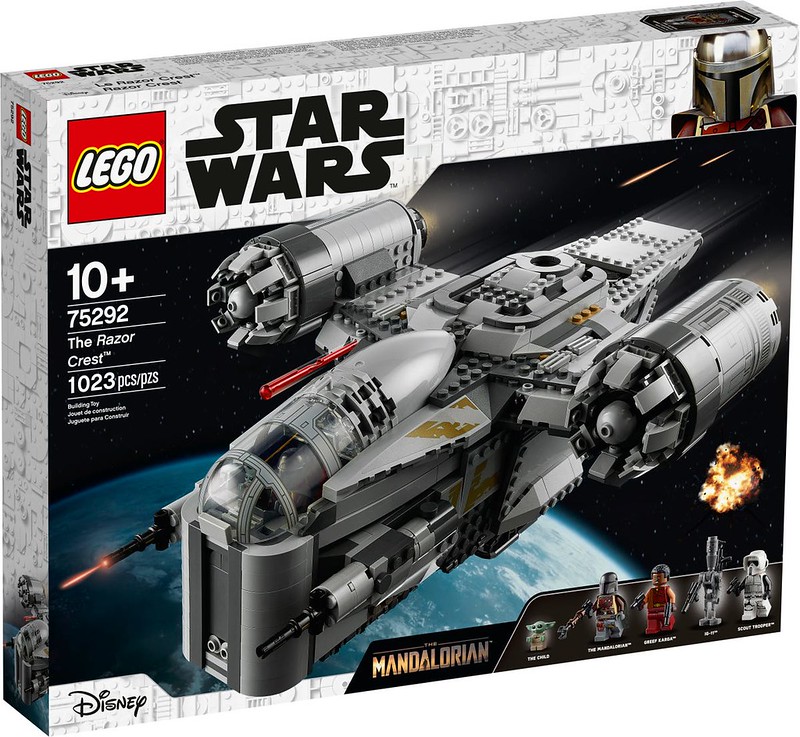 Role-play adventures
A challenging build for ages 10 and up, this 1,023-piece starship construction kit includes 5 collectible LEGO Star Wars characters, including new-for-August-2020 The Mandalorian and the Child LEGO minifigures. It’s great for role play and combines with other LEGO Star Wars sets for even more action.

The Star Wars universe has a long history of featuring iconic ships. From X-Wings to TIE Fighters every generation of that galaxy far, far away has introduced us to some great vehicles and crafts. The Mandalorian is no different, with the titular bounty hunter blasting around the Outer Rim in the Razor Crest. At first glance, it seems a rather bland craft and equally bland LEGO set, but don’t be fooled by the muted colour scheme, which afflicts many Star Wars sets. You start by building the inner frame of the ship and it’s then overlaid by various panels. Most of these are connected in hinges, which means you have access to the inside of the Crest. Admittedly, this is a little sparse but there are a couple of things which feature heavily in the opening episode of the Disney+ show. Those familiar with Star Wars will know that Carbonite Freezing is a rather useful method of keeping living targets in one place. The result is a hardened block of Carbonite, which are represented by a couple of 2×6 bricks and sticker details. Not as impressive as the moulded piece for Han in Carbonite, but it’s still a nice addition. 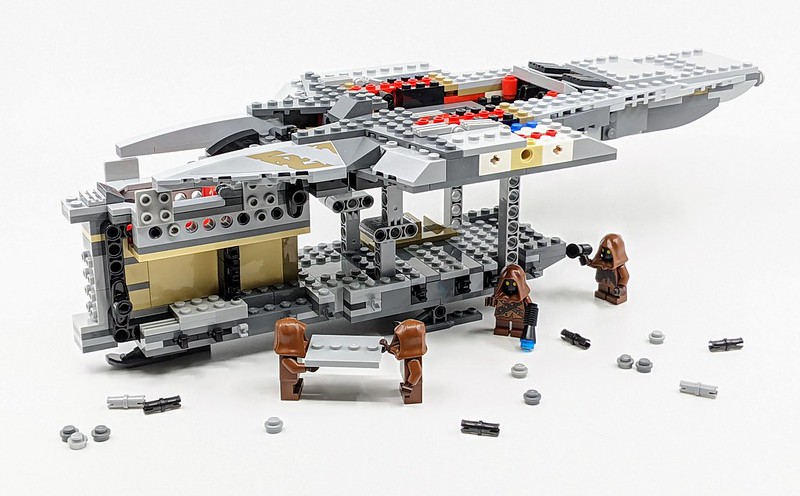 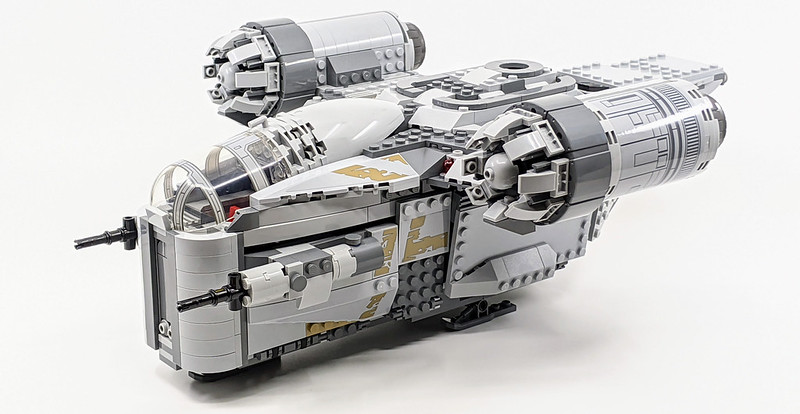 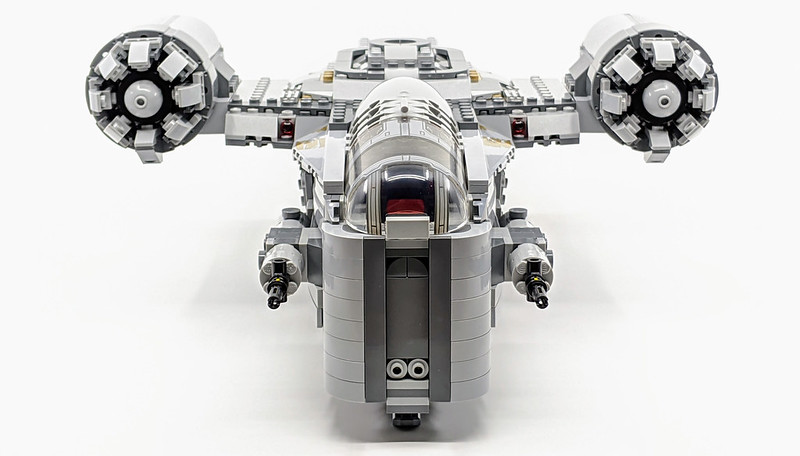 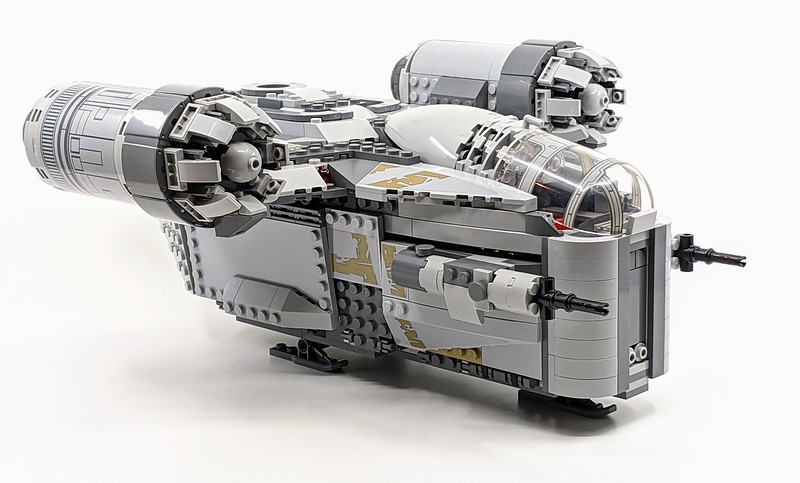 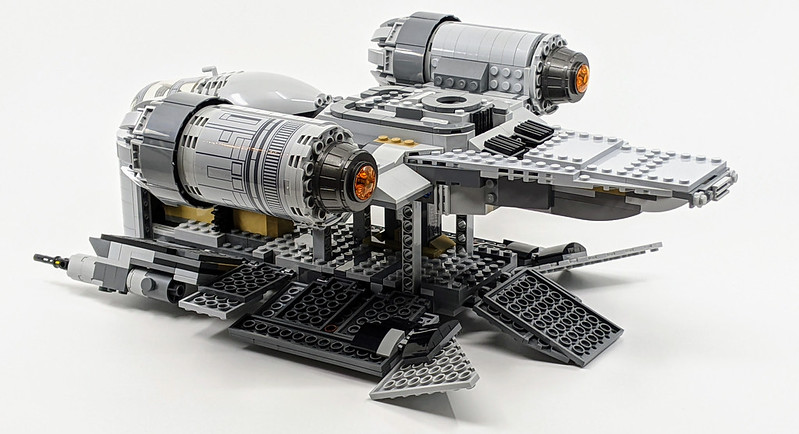 The cockpit of the Crest is a little cramped compared to what’s seen in the show, but there is room for two characters to be seated in there. It’s topped by a new printed transparent canopy. Just behind the cockpit is a removable unit, this is an escape pod with room for one Minifigure. I can’t recall seeing it used during the first season of the show, but it adds an additional play feature. One of the best play elements is a pair of spring-loaded missiles. Now, these are prevalent across numerous LEGO sets and are often tacked on for the sake of it. But not here, they are expertly hidden within the detail of the ship. So much so I didn’t realise why two particular elements weren’t connected to anything. However, once the blaster bolts are loaded in place, these sections become switches to activate firing the ship’s guns. 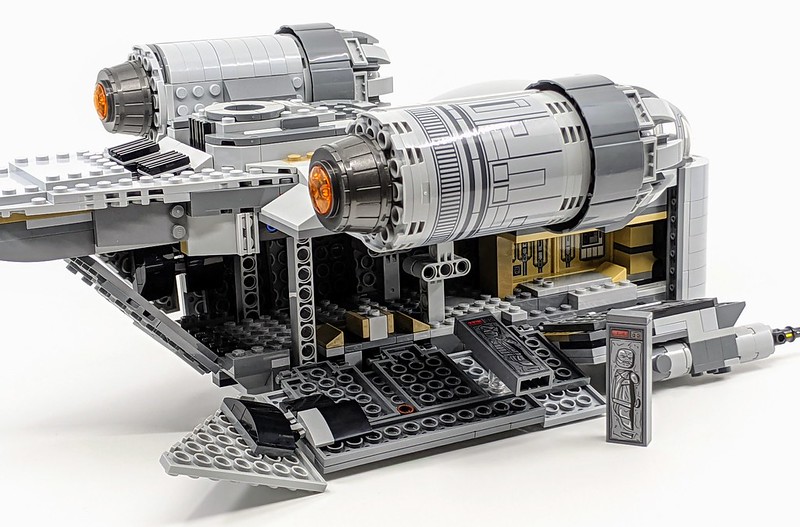 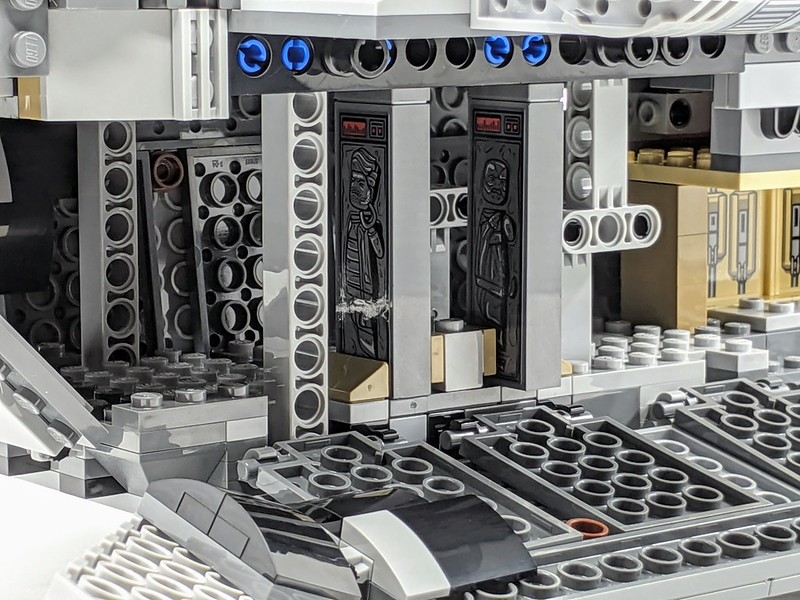 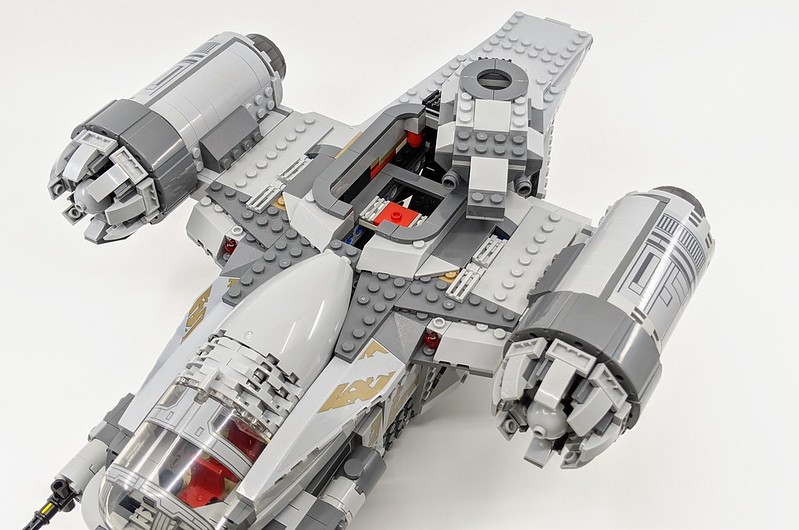 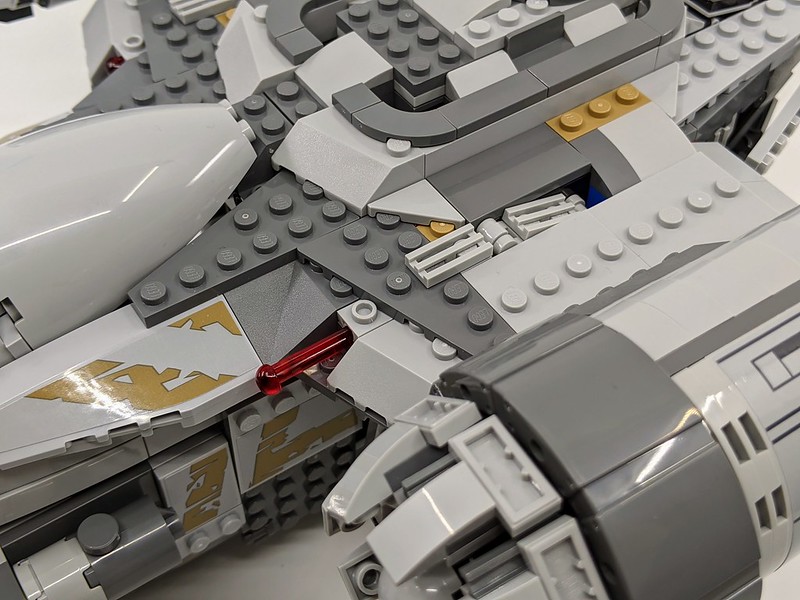 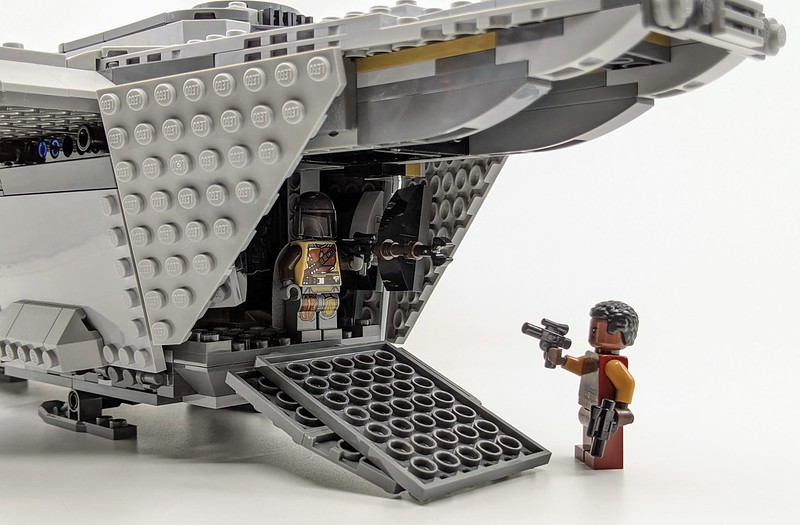 The set features five characters, which include three Minifigures, a Droid and the hot anticipated LEGO version of The Child. As well as bringing the Mandalorian’s ship to the world of LEGO, this is the first set to include the mysterious characters dubbed ‘Baby Yoda’. The body of The Child is the same as one used for the baby Minifigures, it obviously has a new element for the head. The Mandalorian is the same version included in the AT-ST Raider set released last year. This shows the bounty hunter in his original outfit, minus the upgrades it gets during season one. Hopefully, future Mandalorian sets will give us a different variant of the Mando.

During the first season on the Mandalorian, Greef Karga tasks members of the Guild with tracking down bounties. Portrayed by Carl Weathers, Greef makes his only Minifigures appearance in this set. His outfit is nicely recreated, although one of his faces looks far too jolly. Another character to make their first appearance in a LEGO set is the assassin Droid IG-11. This uses a mixture of part normally used for Battle Droid and a printed 1×1 round brick for the head. It’s not as bulky as the Droid in the Disney+ series is, but does a decent job of recreating the character using existing elements. Finally, a sole Scout Trooper is also included, it feels a little out of place, to be honest. The Imperial Scout Troopers play a fairly memorial role in the final few episodes of the Mandalorian but in relation to the Razor Crest, it’s inclusion is a little less obvious.

It’s refreshing to have something new from the Star Wars universe to build. Despite the various crafts and vehicles zooming around a galaxy far, far away, a small handful of iconic ships seems to be on an endless rotation. The Mandalorian has injected a little new life into the world of Star Wars and as a result the LEGO Star Wars theme. The Mandalorian spends a lot of time in his ship, so it was an obvious choice to become a LEGO set, but the result is a great build, which some fun play features. The inside is a little sparse, yet there are a couple of nice details in there, particularly the Carbonite-frozen bounties. For many, the set has been and will be of most interest for The Child Minifigure, which is a cool little part of a much bigger set. If you liked the Disney+ series and want something to build along with the second season, you’ll certainly have fun with this. The second season of The Mandalorian begins tomorrow exclusively on Disney+ and you can catch the entire first season on there right now. 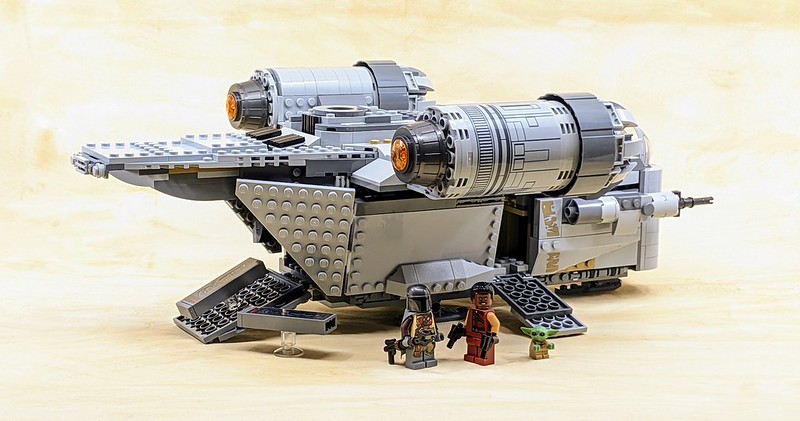