Over 40 years ago a small spaceship slowly emerged onto the cinemas screens and changed popular culture forever. That ship would later been known as the Tantive IV, a consular ship which was on a diplomatic mission from the doomed planet of Alderaan. Aboard the rebel blockade runner was Princess Leia and her rebel soldiers, who were carrying a very important message for the Rebel Alliance, one which could turn the tide of the war in the Rebels favour. As the LEGO Star Wars theme celebrates its 20th Anniversary, this years May the Fourth set goes back to where it all began, with a new version of the Tantive IV. In the past there has been playset style set released and a UCS set in 2001. Oddly this is neither a UCS set or a Master Builders Series set. But it is a fairly large set and one I’ve been given the chance to review ahead of its official release later this week. 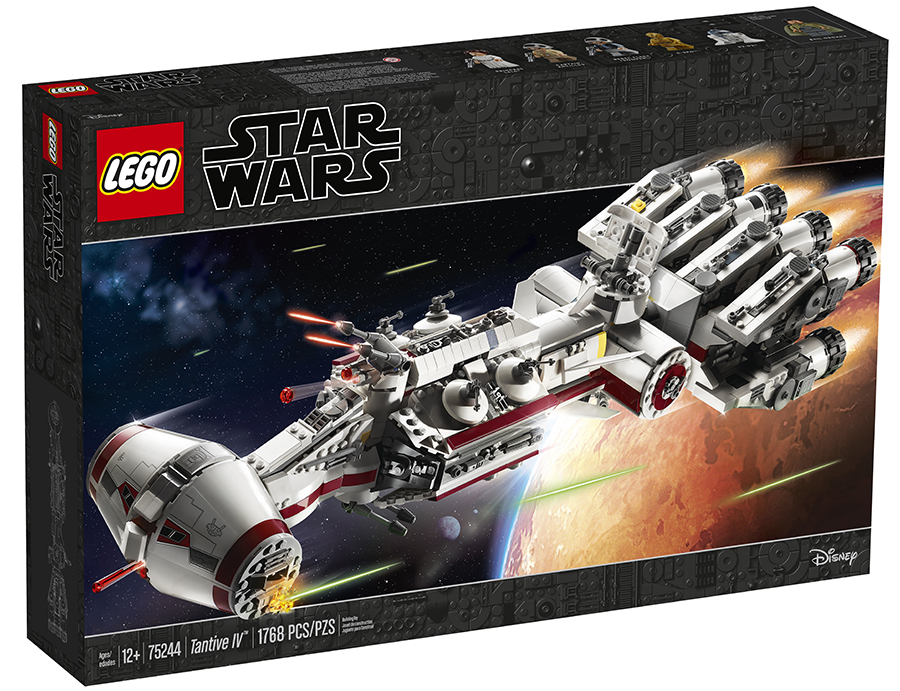 Build, play and display a legendary Star Wars™ starship! This LEGO® Star Wars 75244 interpretation of Tantive IV, seen fleeing from an Imperial Star Destroyer in the opening moments of Star Wars: A New Hope, faithfully recreates all of the Rebel cruiser’s signature details, including an elongated hull, detachable escape pods, elevating gun turrets, cargo hold and 11 massive engines at the back. Remove the hull plating of this fantastic LEGO Star Wars vehicle to reveal a detailed 2-minifigure cockpit, conference area with table, weapon rack and a control console with 2 seats. The radar dish also doubles as a convenient carry handle, which makes it perfect for flying around the room. When the mission is over, this amazing kids’ buildable toy also makes a great centerpiece for any LEGO Star Wars collection. The set also includes 5 minifigures and an R2-D2 droid LEGO figure.

Over the last 20 years there’s been a fair few ships and vehicles released as part of the LEGO Star Wars theme. They range from mini microscale sets right through to the largest LEGO set ever made. Many of the larger LEGO Star Wars sets have been branded as Ultimate Collectors Series builds and last year large scale playsets were branded as Master Builder Series. The Tantive IV is neither, although it seems to be leaning more towards being a playset than display piece. I’ve built a surprisingly small amount of large scale Star Wars ships, I have built things like the UCS Sandcrawler and Ewok Village, plus the ultimate Star Wars set – the UCS Falcon, but the Tantive IV is the first big playset ship I’ve built. So I didn’t know what to expect, especially since the set isn’t branded as either a UCS or MBS set. One thing I wasn’t expecting was the size. The build is split across 13 numbered bags and as I built it, it didn’t feel like it would be a big set, until I’d finished the base of the ship. This is largely made up of various plates and a few Technic pieces here and there. It’s not until you start adding the upper sections of the ship, does its size really hits you. 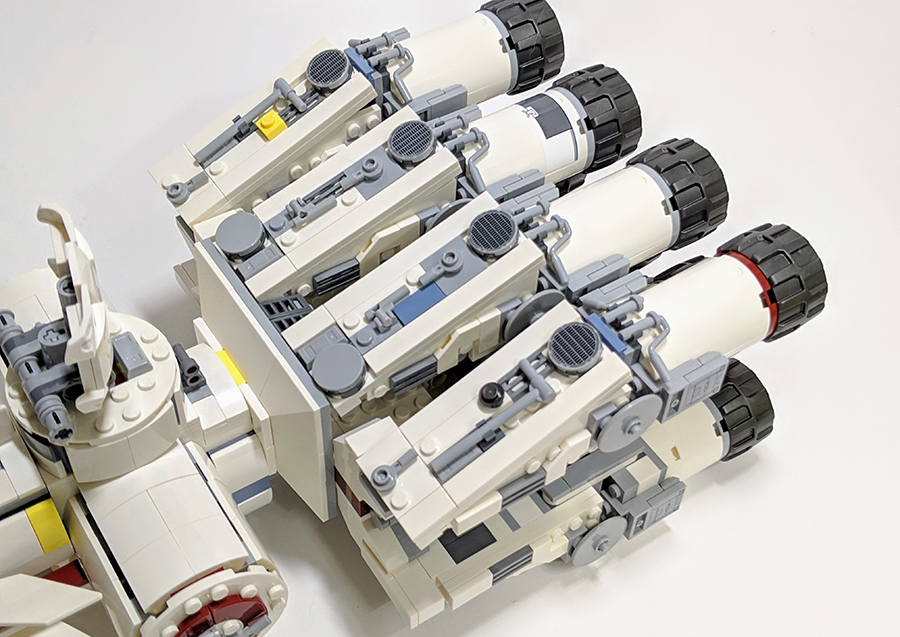 What surprised me most is how much of the build is focused on the 12 thruster engines, each of these are built independently to the main body of the ship, and are connected via a duo of Technic pins. Admittingly they are a large part of the ship, but you wouldn’t think each engine had to so many elements in them. The use of plastic wheel elements, for the end tip of each thruster is definitely a great improvement compared to the 2009 version of the Tantive IV. The way they are connected also spreads them each out a little better than the 2009 version as well. The mid section of the ship has a few removable pieces, there are two ‘escape pods’ which if it wasn’t shown in the sets promotional images, you wouldn’t really know this is what they are meant to be, you can just about squeeze in the Droids into the pods. There’s also an angled roof section, topped by four gun turrets. Underneath is a rather small inner section of the ship, where you’ll find a cool little table, which look delightfully retro and has two seats. You can sit two Minifigures on these and have the roof plate in place, but you can’t stand characters up with it on. Just in front of this section is another turret, which is mounted on twistable plate. 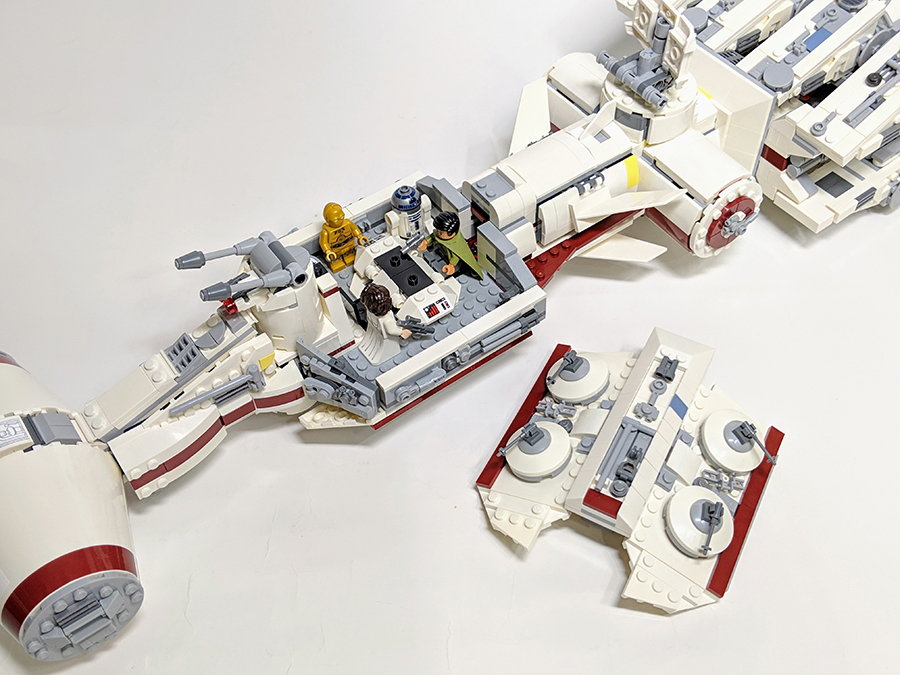 With a set of this size, it can be tricky to hold, so a useful retractable handle has been built into the set. It partly looks like a communication antenna, so doesn’t stick out like a sore thumb. It’s connected in such a way, so when you lift the set, it has a little give and is positioned in such a way as when you pick the set up with it, it’s also nicely balanced. Particularly as much of the weight is in the rear of the set. The build is finished with the front section of the Tantive IV, this has the unique looking ‘hammerhead’ shape, interestingly this uses the same cone sections as the 2009 Tantive IV, but the clear section is gone and the graphic detailing is no longer printed, instead it’s achieved with stickers. They are connected differently as well, the original had a hinged front section, with the top part being able to be lifted open. This version is connected via a few simple elements and to get to the cockpit, they need to be removed. Due to the small points of connection, they can easily fall off. Although I prefer, this versions longer ‘neck’ section compared to the 2009 stumper version. I have to say the 2009 Tantive IV’s front section seems way better than what has been achieved here. 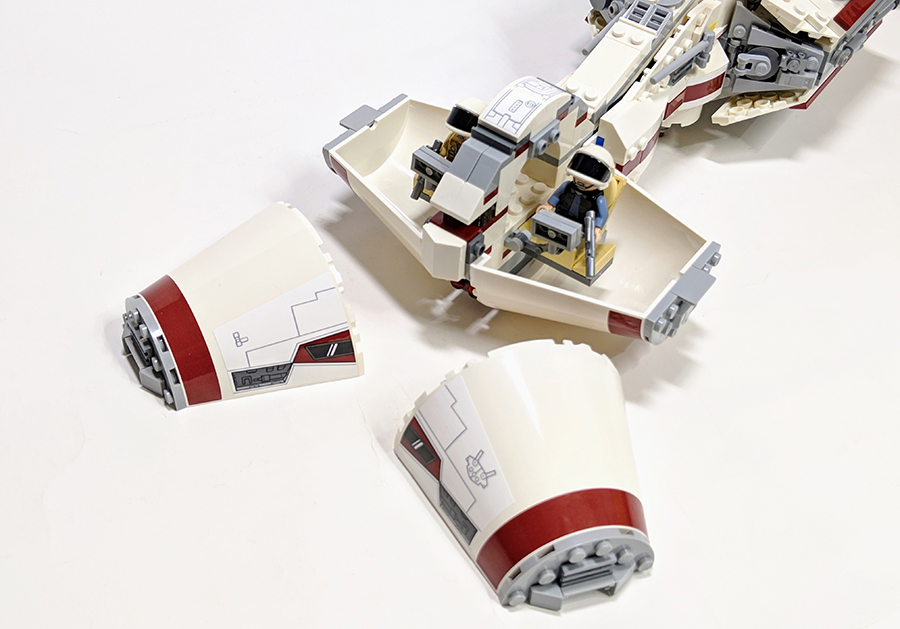 It’s not just those front cones which can pop off unexpectedly, they are a couple of fins, which run along the bottom of the ship, which have a habit of falling off just by looking at them and some of the greeble detail on the outside of the ship is a little temperamental. Particularly things like the rollerskate and binocular elements. It’s an odd mix of being a playset with things like the inner sections for the Minifigures and spring loaded missiles. Whilst also being a display due to its scale and impressive amount of detail.

The set includes six characters, one more than the 2009 version and amazingly Senator Bail Organa makes his Minifigure debut. He has only ever appeared in Minifigure form as a digital Minifigure in the LEGO Star Wars games. Bail Organa’s outfit appears to be styled on his appearance in Rogue One, so he’s in a mix of olive green and grey clothes, with a olive green cape. His skin tone uses the tanned flesh tone, which made its debut in the Freemaker Adventure sets. 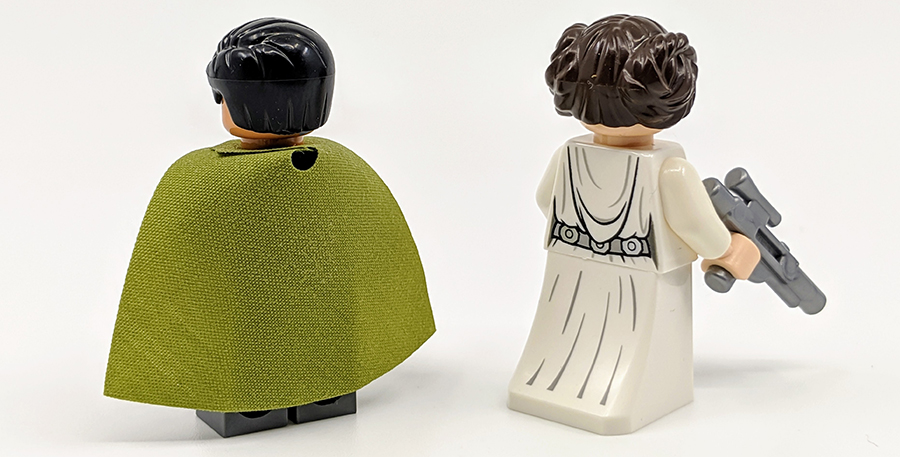 Bail is joined by his adopted daughter and founding member of the Rebel Alliance, Princess Leia Organa. This is a new version of the much-loved character, normally she features a pair of legs, but this time she also has one of the new curved skirt elements. This has print detail on the front and back. It works really well and gives a new take on a character which has appeared in a number of sets over the years. Both character have two different face prints and blaster weapons. 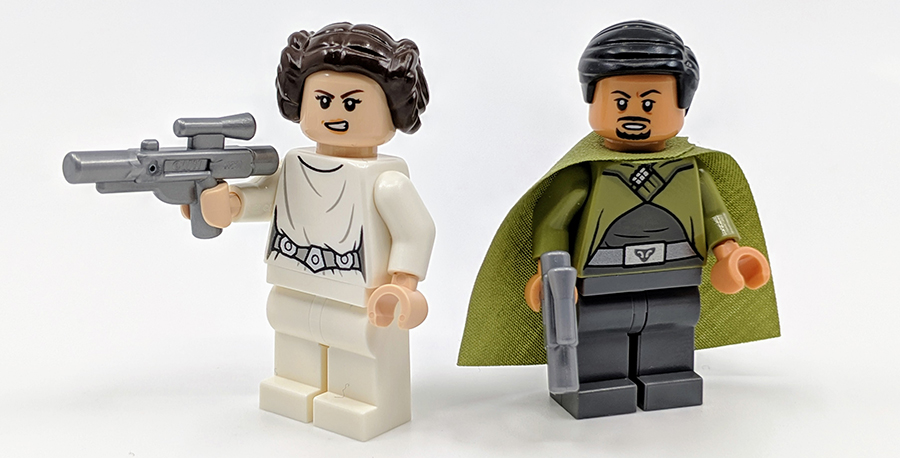 As well as the Tantive IV being on the first Star Wars moments to appear on screen back in 1977, some of the first characters to appear were the loveable droids R2-D2 and C-3PO. These pair have appeared in numerous sets over the sets and the versions here and no different to more recent versions of the characters. Print detail is better than the 2009 versions and they really had to be featured in the set, especially as it’s the first place with met them. Finally there are two Rebel soldiers, a generic fleet trooper in the blue outfit and Captain Antilles in the tan outfit. He is the trooper who is famously choked to death by Darth Vader, once he boards the Tantive IV. Both characters have the same Rebel Trooper helmets as their 2009 counterparts, in all honestly this element is the perfect representation of the onscreen versions, so doesn’t need to be updated. Firstly I was surprised by the sets size, I didn’t expect it to be as big as it is. Secondly I was surprised by how enjoyable it was to build. Often sets which have multiple similar section can feel a little repetitive but I didn’t find that with the Tantive IV. I also appreciate the carry handle, which partly helps to inadvertently stop some of the less stable pieces falling off. I also like that it’s been incorporated into the set, so it doesn’t feel like it’s out of place. The finished set certainly looks better than the 2009 version. It’s longer body, results in a better looking ship than the past one. However I’m not a fan of the way the cockpit canopy is connected, the 2009 version seems to be a much better way of doing it. Plus the older version was printed, although the stickers on the new version aren’t that bad. It’s a tricky set to sum up, it has extremely limited play features, yet doesn’t feel as much a display piece as a UCS set, although it detailed enough to be one. That’s not to say it’s a bad set. Most of the newly updated parts of the build are a major improvement over the 2009 version. The line-up of Minifigures are decent enough, I like the new version of Leia, especially her new skirt piece. I’m particularly surprised the set marks Bail Organa’s first ever LEGO appearance in 20 years. Although he wasn’t part of A New Hope, he was on the Tantive IV during the Prequel Trilogy. So he may seem on odd inclusion when partnered with the other characters, but it’s warranted. The LEGO Star Wars Tantive IV will be available on May 3rd exclusively for LEGO VIP members, then available for all on May 4th, and will be available from LEGO stores and online. This set was provided to BricksFanz by the LEGO Group for purposes of review. The thoughts within this review are that of BricksFanz and do not reflect those of the LEGO Group, Disney or Lucasfilm. Providing the set for free, does not guarantee a favourable opinion of the set.