Dragons are a prominent feature of the LEGO® NINJAGO theme but previous mythical beasts pale in comparison to the Golden Ultra Dragon. It’s the biggest dragon to be featured in a NINJAGO set, it’s also the largest of the new sets inspired by the NINJAGO Crystalised TV series. This bulky beast of a set combines the elemental powers of four ninja and they are all represented by this four-headed dragon. The set also includes 9 minifigure characters. But does bigger, mean better? Here’s my final LEGO NINJAGO Crystalized set review with a look at Lloyd’s Golden Ultra Dragon. 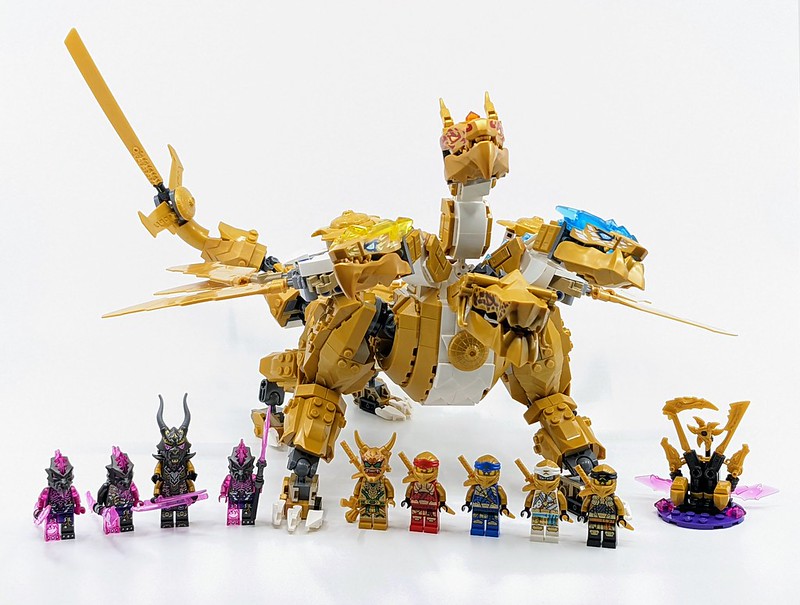 Kids aged 9 and up can stage their favorite scenes from the NINJAGO®: Crystallized TV series with Lloyd’s Golden Ultra Dragon (71774). The dragon playset includes NINJAGO’s biggest ever dragon, featuring 4 heads, highly posable legs and tail, and a pair of wings that unfolds into 3 blades – all in gold!

A building set to capture the imagination of ninja fans
This building set is packed with 9 minifigures: an exclusive Golden Oni Lloyd; Golden Cole, Golden Zane, Golden Kai and Golden Jay, who are all armed with their elemental golden weapons; Crystal King; 2 Vengestone Brutes; and a Vengestone Warrior. 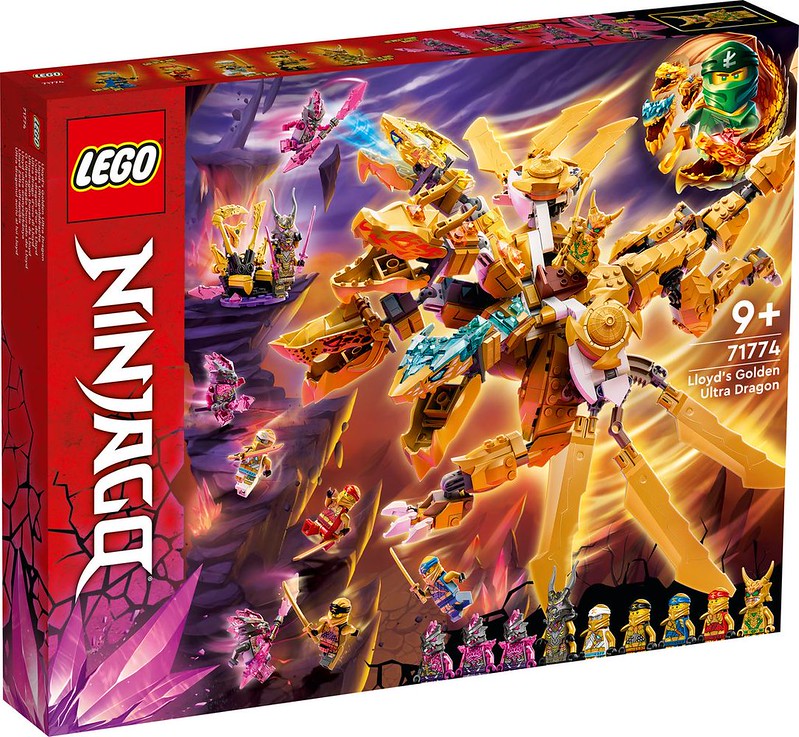 One rather surprising thing about this NINJAGO set is the lack of stickers. There’s not a single one used in the set. That doesn’t mean printed pieces have been used instead. Apart from the dragon heads, there is a lack of any additional details beyond those created by the actual elements. The build is largely focused on the dragon, but there is a small build to put together first. It’s a small throne, which I assume is that of the Crystal King. The regal seat is adorned by every single one of the new Golden Weapons. These have featured in most of the other new NINJAGO sets and are also dotted around the Crystal King’s temple set. 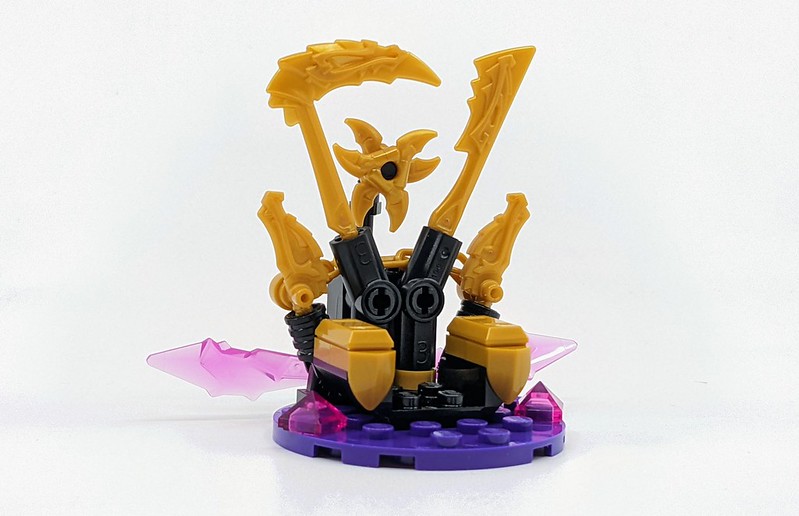 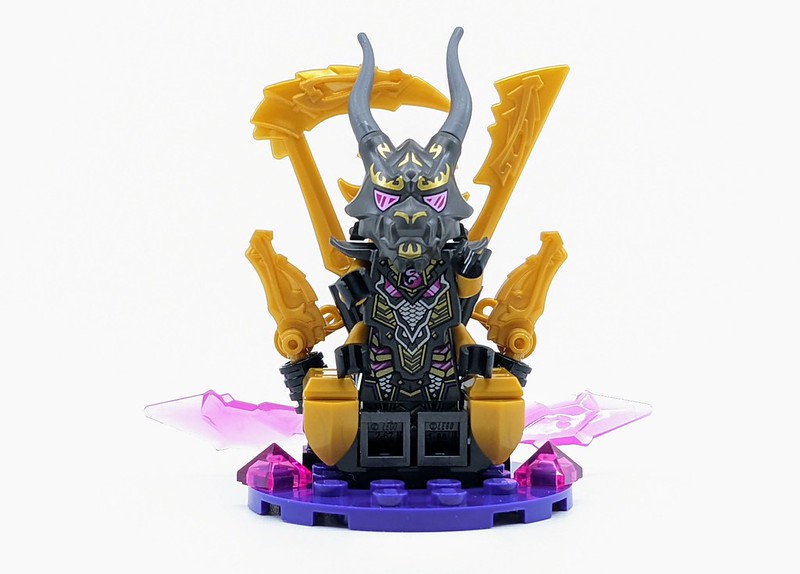 The dragon is billed as being the largest yet, I’m not sure if this is in terms of scale or piece count. But it certainly doesn’t feel extensionally bigger than some of the other similar dragons from past NINJAGO sets. In fact, this isn’t the first time we’ve had a dragon with multiple heads either. Regardless of the exact status of the dragons in the NINJAGO league table, it’s certainly a bulky creature, especially with the opening wings and long tail. 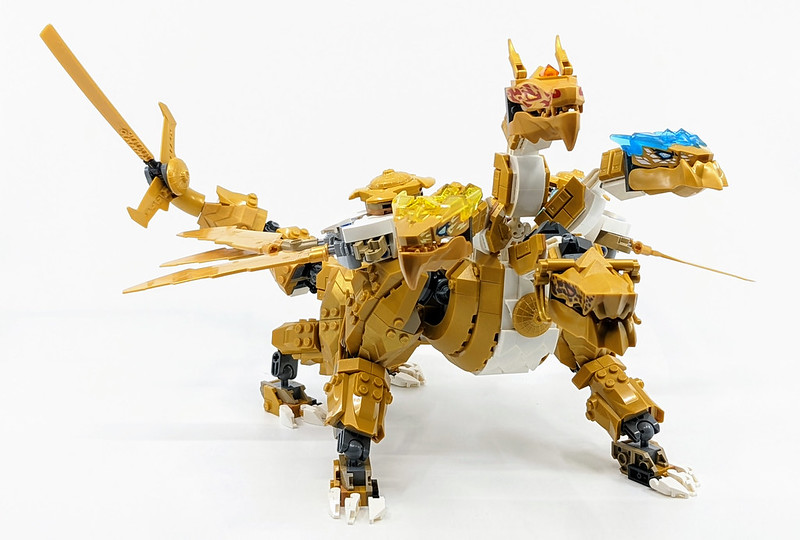 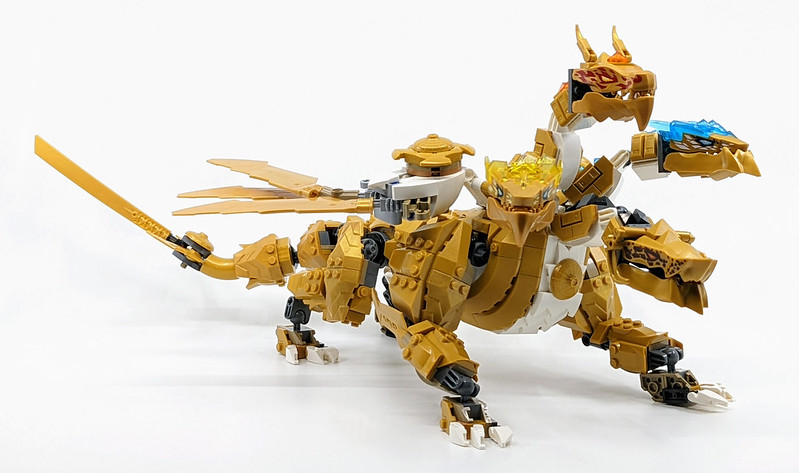 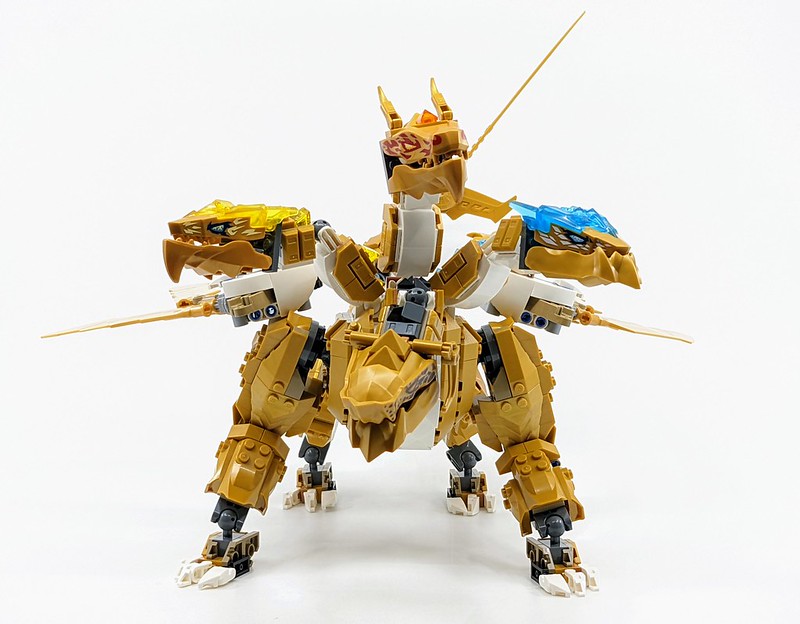 The build begins with the body and considering the overall size of the set, the body section is surprisingly small. It’s extended a little with the addition of the dragon’s tail. This is split into a number of smaller sections, allowing it to be twisted and bent in various ways. As I was building the set, the tail felt really loose, so make sure you’ve firmly clipped each join together. Once it’s connected to the rest of the body, it’s certainly more secure. The main body section is bulked out with various pearl gold pieces, this help to make the body appear bigger than it actually is. 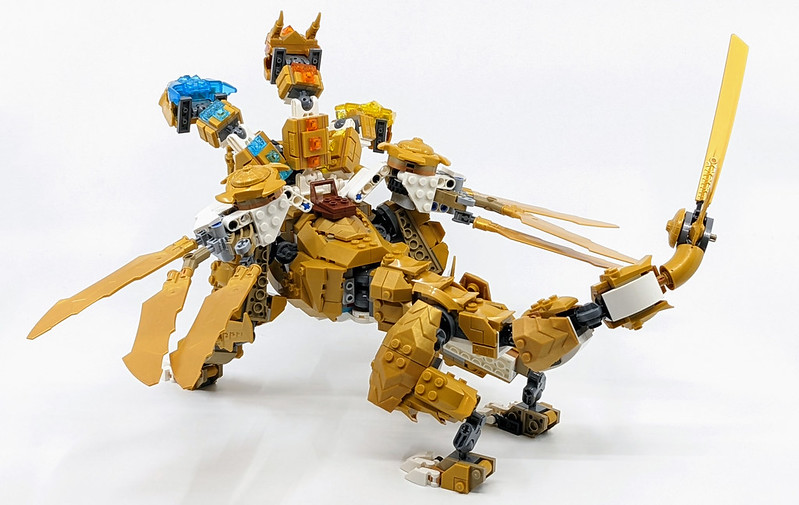 At the very front of the body, you’ll find four large ball joint sockets. These are where the four dragon heads are placed. Each head represents a different ninja so there’s a lightning head for Jay, an earth head for Cole, an ice head for Zane and a fire head for Kai. The heads each use a pair of unique elements to create them. One thing I like is these pieces aren’t just the same with different colouring on them. Yes, they look similar but each head is unique. Each one has different print detail or colouring to tie it to a ninja, even the jaw sections are different. 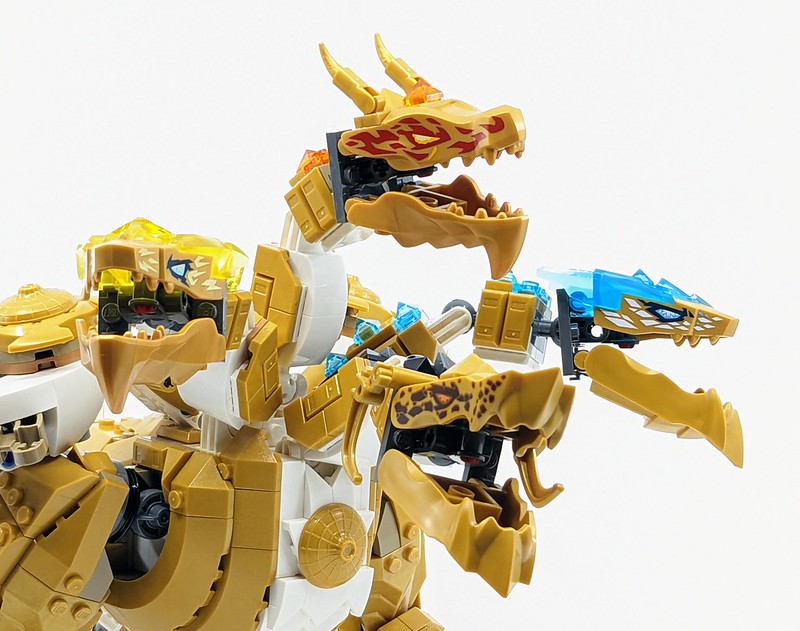 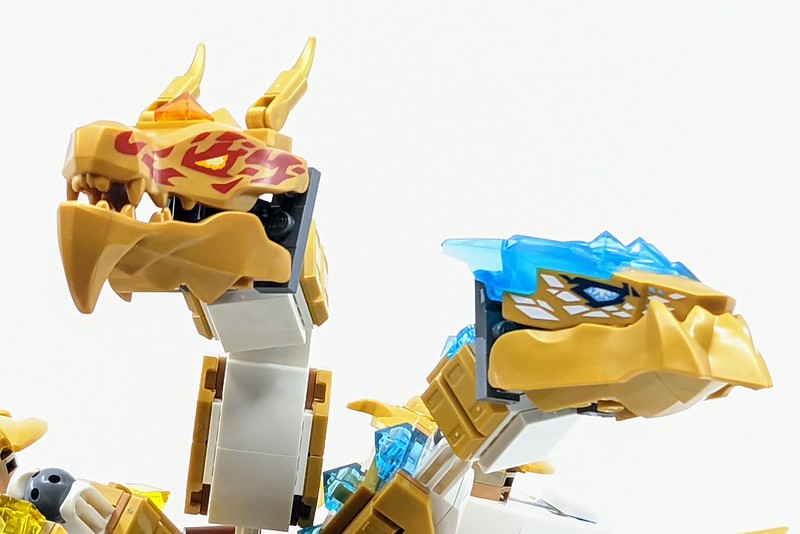 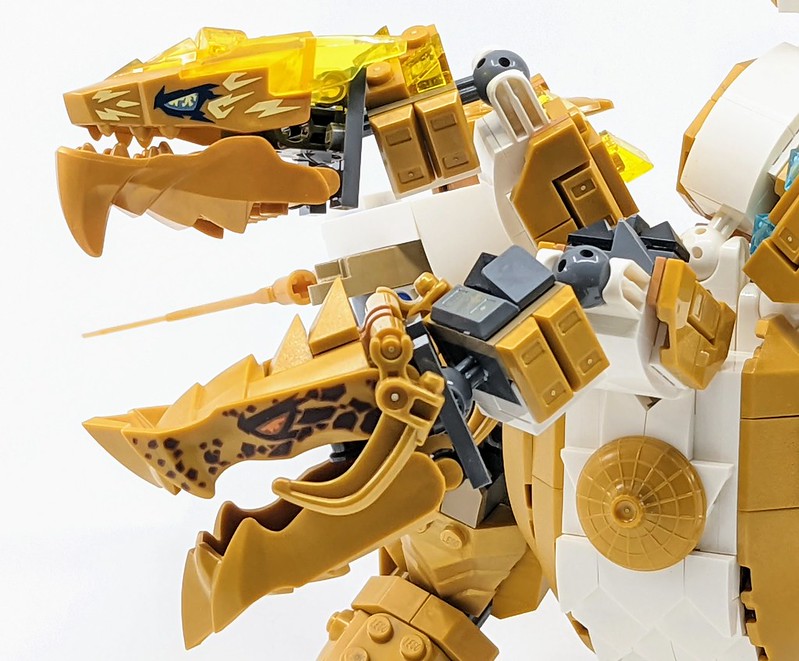 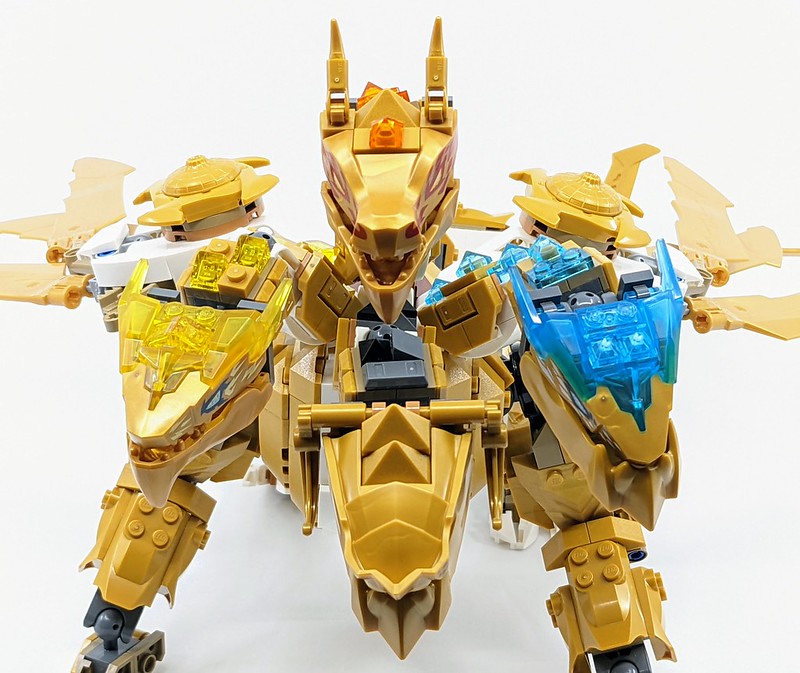 Each of the heads has various points of articulation, which is also the case across other parts of the set, including the four legs, each built independently of the body of the dragon and the long tail section. Even the jaws of each dragon have a unique movement, thanks to a recently introduced element. A pair of 1×3 plates with two upwards-facing clips, links both sections of the dragon heads. The wings also offer a unique movement function. Each one features a quarter gear curve, with two gear-tipped Technic elements. There’s also a tyre which sits against the smooth edge of the curve. The combination of these elements allows them to be spread open or folded back, by twisting the blade cap, an element from the early days of the NINJAGO theme. 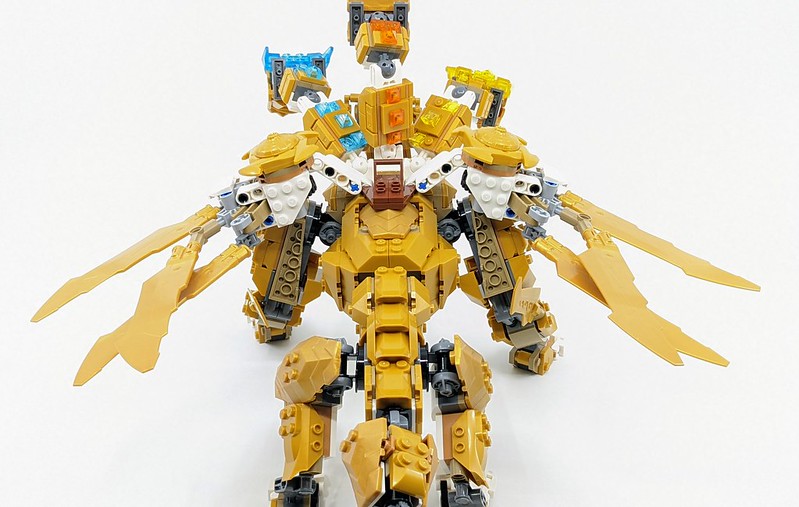 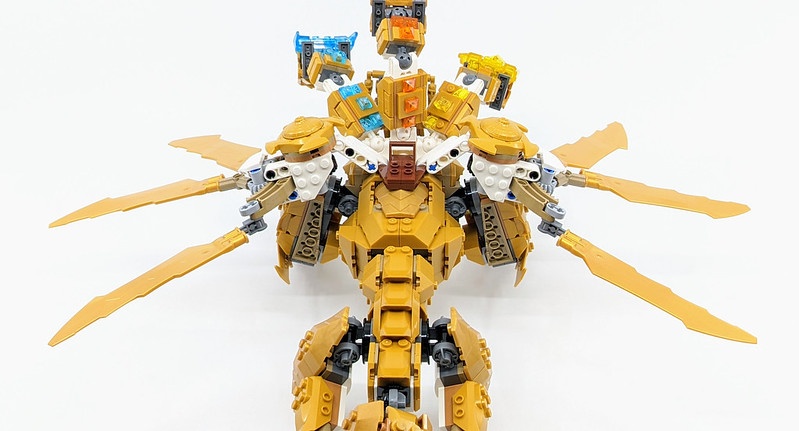 As a large set, it features the most amount of minifigure, with only one being unique to the set. Each of the ninja represented by dragons are featured including Kai, Cole, Zan and Jay. With each of them wearing their Golden Ninja suits. These are similar to their standard robes but feature far more gold trim and their hoods are largely gold as well. Each of them appears in other sets in this wave. The similar minifigures continue with the Vengestone Army, three soldiers are included as with all the Vengestone recruits, they all use the same dragon-like head, with only slight differences in the torso print and weapons. 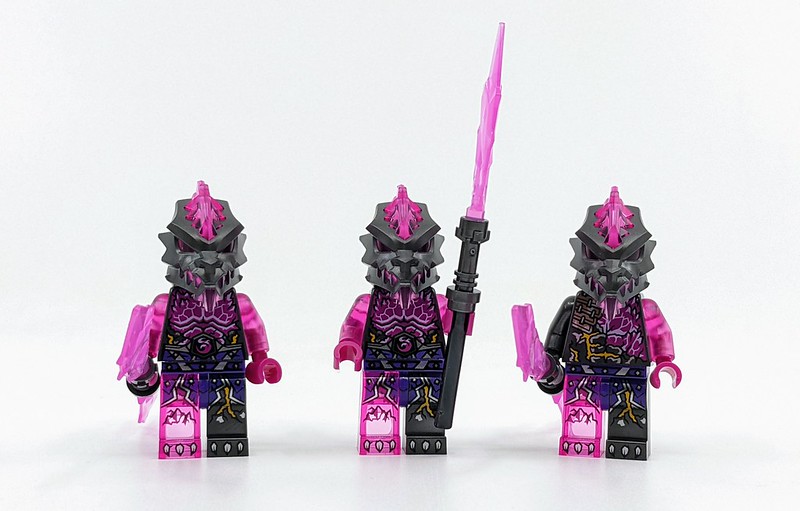 The Crystal King makes his third appearance in a set and his second in his four-armed form. Although the minifigure uses the same torso pieces as Garmodon, the Crystal King’s true identity has yet to be revealed by the TV series or the sets. Although the rest of the characters can be found in other sets, Golden Oni Lloyd is only featured in this set. Lloyd has been featured as the Golden Ninja in many sets before now, but this version adds a unique Oni-style mask. This clips into a similar helmet piece as used on the Crystal King, but you can’t flip it up as much as you can with the Crystal King’s mask. 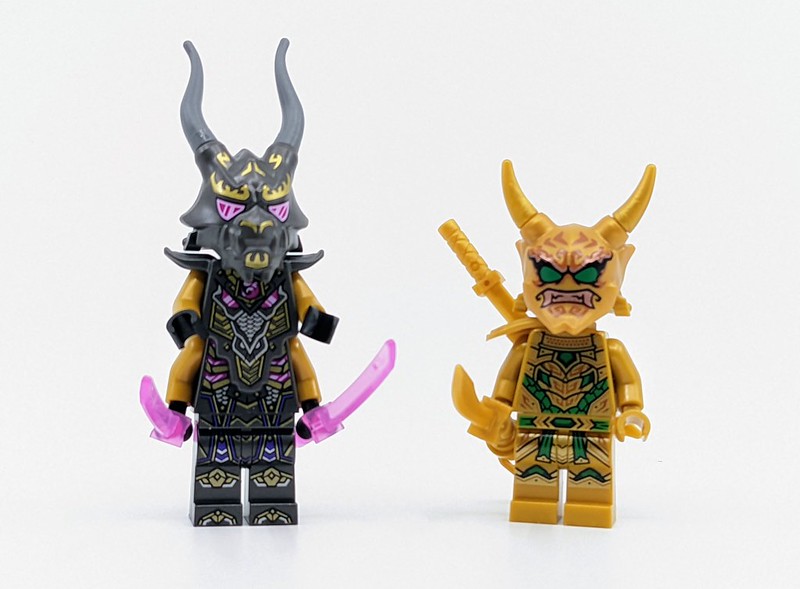 It’s an odd set really, it’s billed as being the largest NINJAGO dragon but it doesn’t feel as such. Instead, the build feels a little underwhelming. That’s not saying it’s a bad set, the build experience simply feels just a little plain. Despite that, it does have a few fun sections, the dragon heads are great and I like that they aren’t just copied and pasted for each one. Plus the wings are a clever mechanism, especially with the combination of elements used to make them work.