Although my gaming journey began with Atari and currently continues with PlayStation, I have a big soft spot for Nintendo and own every one of their gaming systems. When the LEGO Super Mario line was first announced it filled me with joy to see two passions combine. The Mario sets can be split into three categories – Expansion Sets, Character Packs and D2C sets. For many fans, it’s those ‘Direct to Customer’ sets which are the most exciting. With the release of the second Super Mario Bros Movie trailer, it’s the perfect time to take a closer look at the latest large-scale LEGO Super Mario set – The Mighty Bowser. 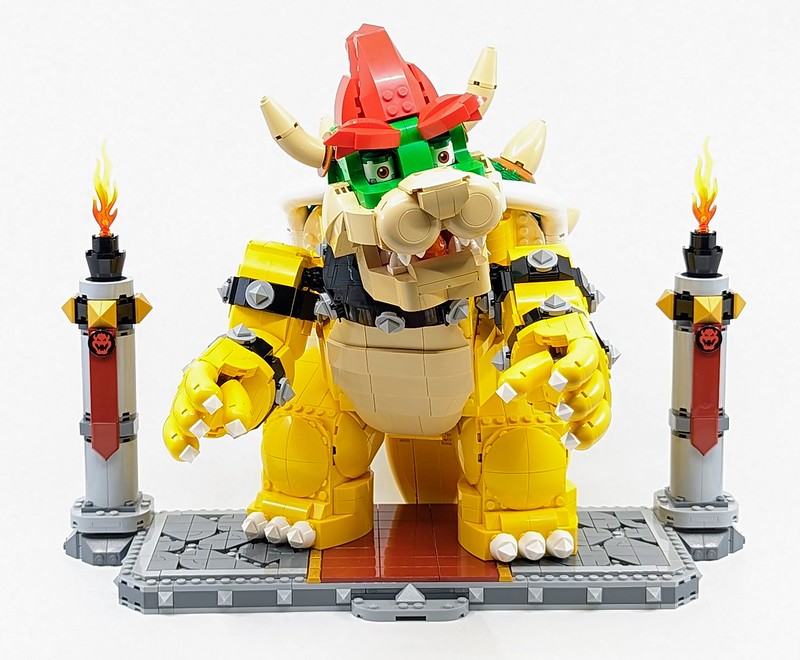 Appreciate the king of the Koopas when you build, display and play with LEGO® Super Mario™ The Mighty Bowser™ (71411). This buildable figure uses new-for-October-2022 LEGO elements to recreate the look of Bowser’s spikes and has many features, including a fireball launcher and a button to control Bowser’s head and neck movements. His arms and fingers move too!

Interactive play
Display The Mighty Bowser on the brick-built battle platform, which has 2 towers for him to knock over, a hidden POW Block and an Action Tag. Combine The Mighty Bowser and the platform with a LEGO Super Mario Starter Course (71360, 71387 or 71403 – sold separately) for battles with LEGO® Mario™, LEGO® Luigi™ or LEGO® Peach™. A great gift for any Super Mario™ fan and fun for all the family, this set includes step-by-step instructions to guide the complex build. 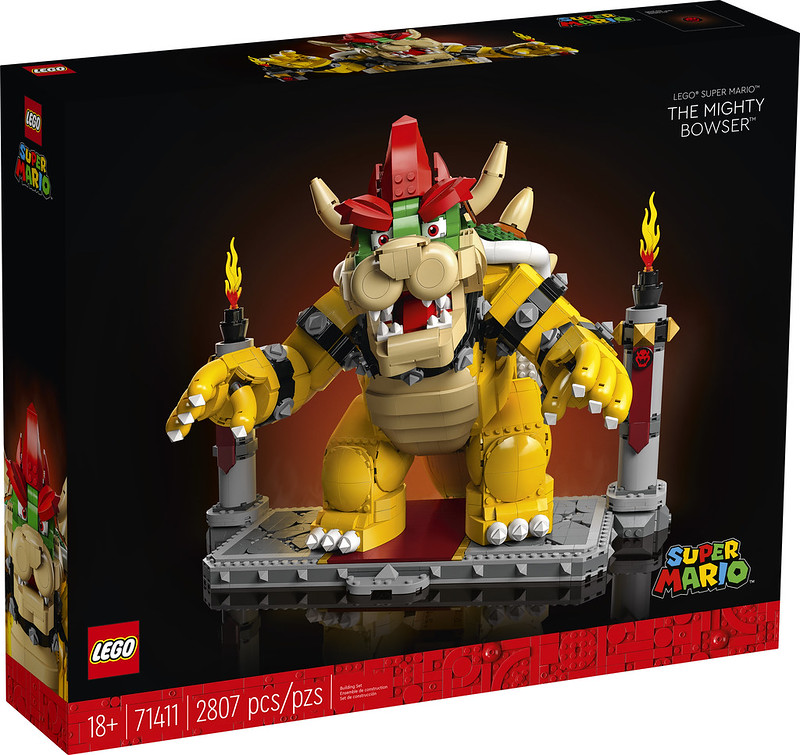 Mario’s most fearsome foe goes by many names – King Koopa, King Bowser, King Dad and for an odd time in the 90s President Koopa. Whatever you call him Bowser has been a key fixture in the Mario series since the very beginning. Bowser first appeared in the iconic 1985 Nintendo game, Super Mario Bros. Since then he’s been trying to kidnap Princess Peach with varying levels of success and generally causing an annoyance throughout the Mushroom Kingdom. 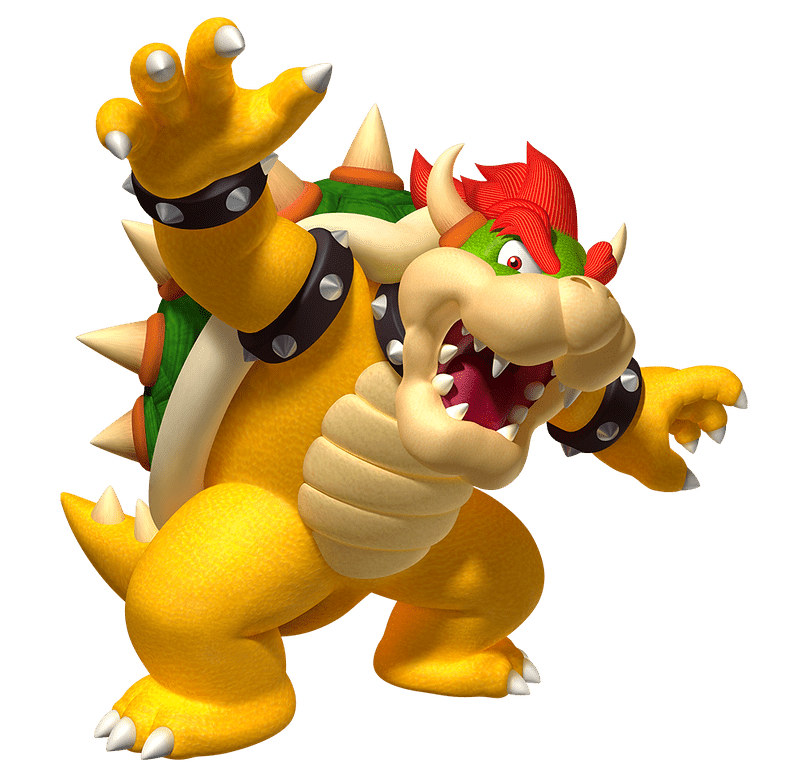 Bowser has also appeared in various forms across the LEGO Super Mario sets. He’s been a buildable character in a couple of sets and has inspired others such as Bowser’s Airship. He’s even appeared as a hidden microscale menace in the ‘?’ Block set. His various LEGO outings are detailed in the instruction booklet, along with a little history about the character’s gaming adventures. 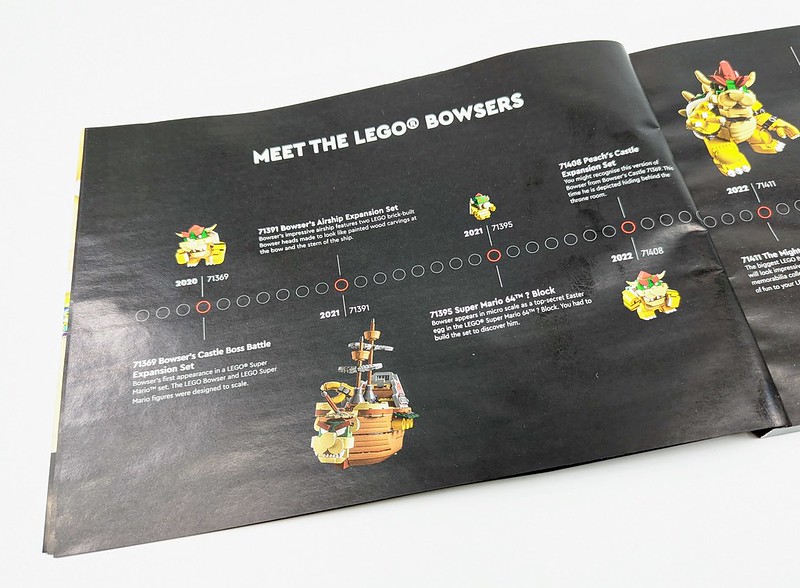 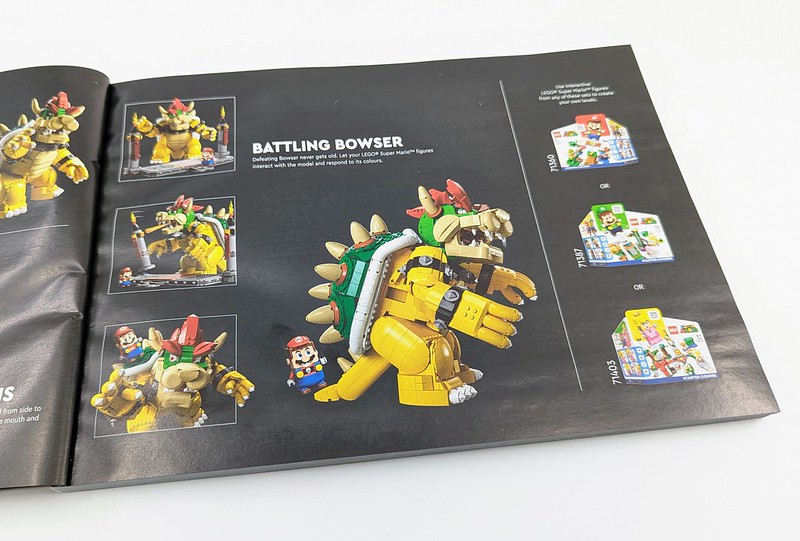 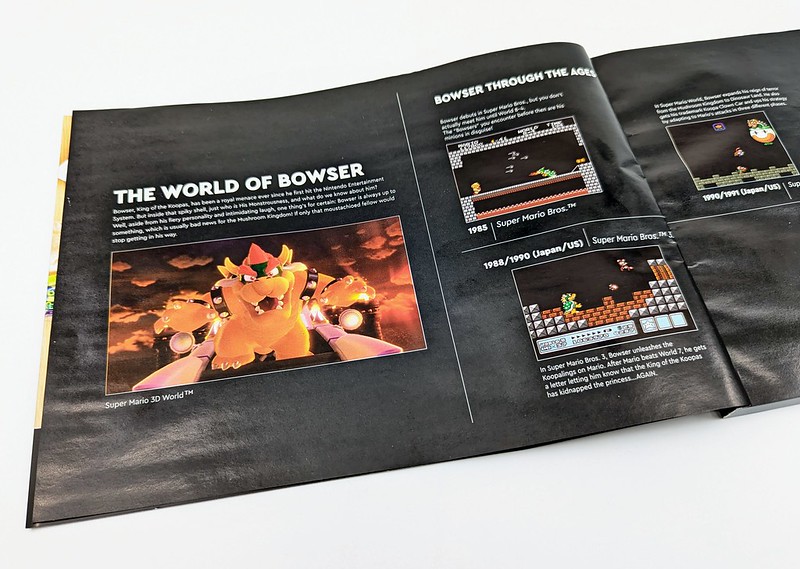 Of the three large-scale LEGO Super Mario sets, The Mighty Bowser commands the largest piece count and the result is quite impressive looking Brick-built character. But the build process actually starts with a display stand. This is styled to look similar to the interior of Bowser’s preferred dwellings – a castle. This display stand includes a couple of treats including a tower of turret towers, one of which is hiding a POW block. 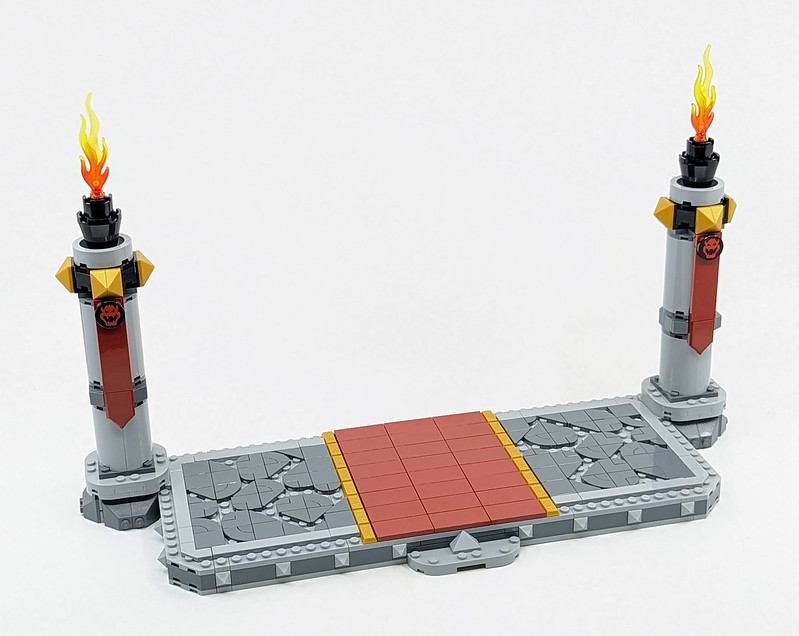 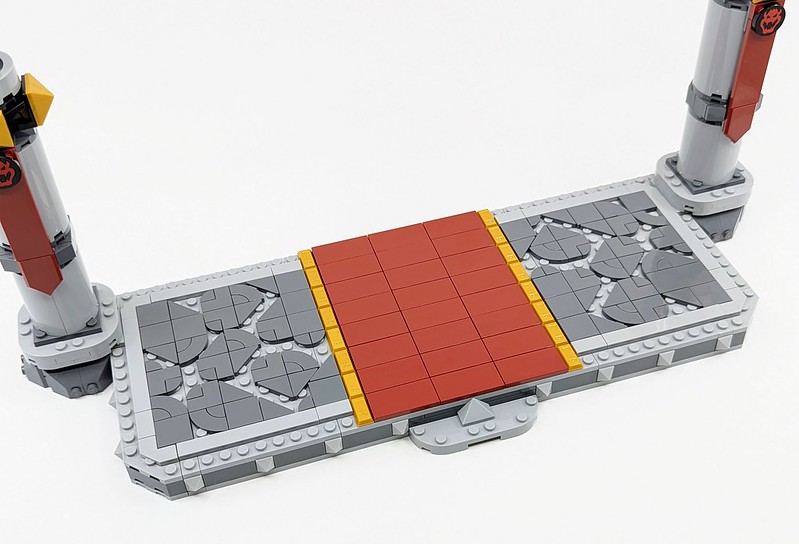 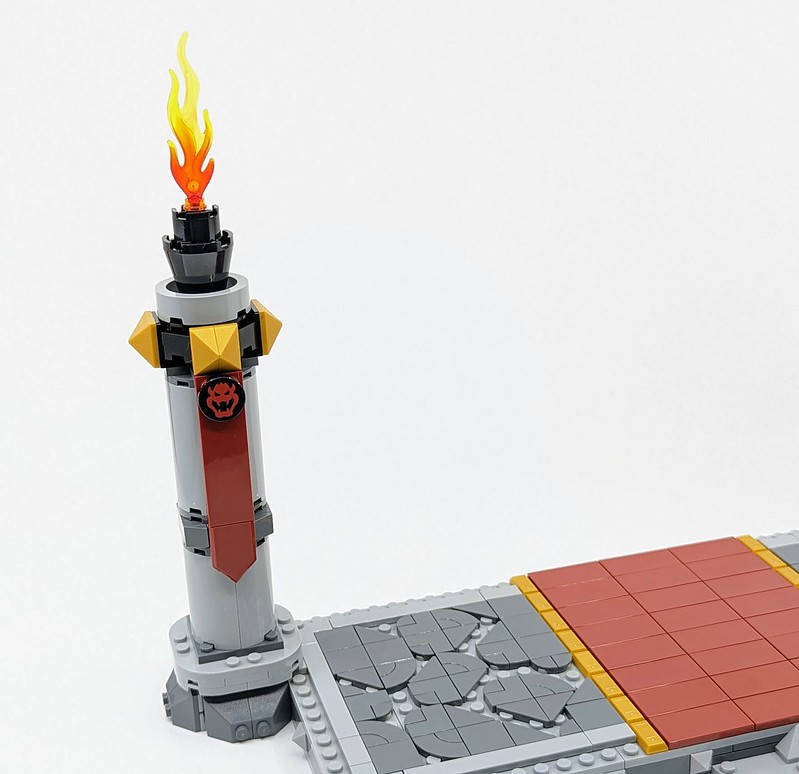 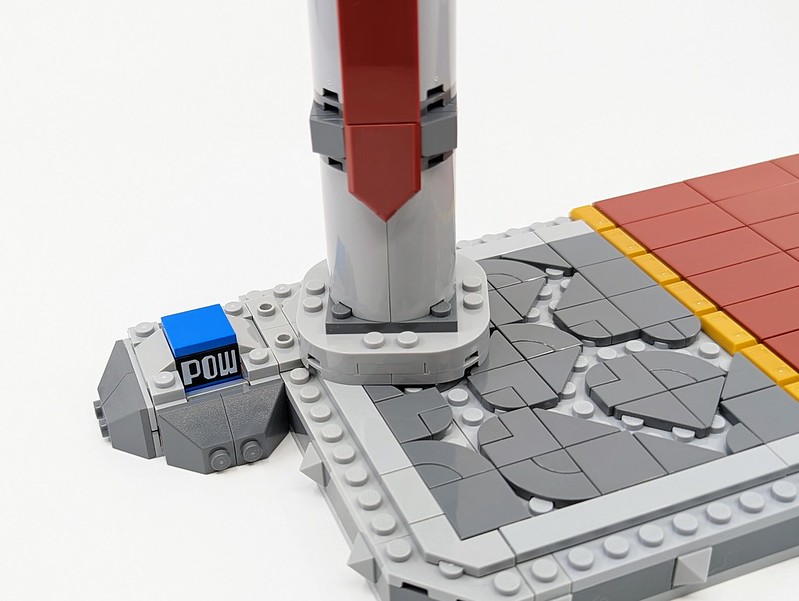 There’s also a slide-out panel, which reveals an Action Tag tile. This ties the set to the wider Super Mario theme by offering an interactive element which can be activated with any of the current Interactive Characters. Scanning the Action Tag with Mario, Luigi or Peach will activate a short mini-game in which you take on the MIghty Bowser. Hitting Bowser with the interactive figure will eventually see home defeated and a tasty amount of coins added to your score. One of my favourite parts of the display stand is the patterned floor, this is made up of various tiles and is fun to piece together. There are no connection points on the stand, which makes it a largely unnecessary extra. I’m sure its omission would help lower the set’s price point. 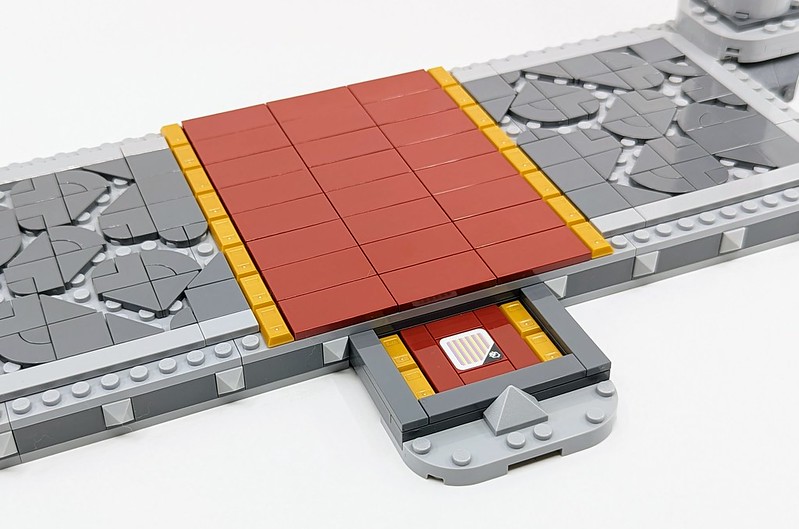 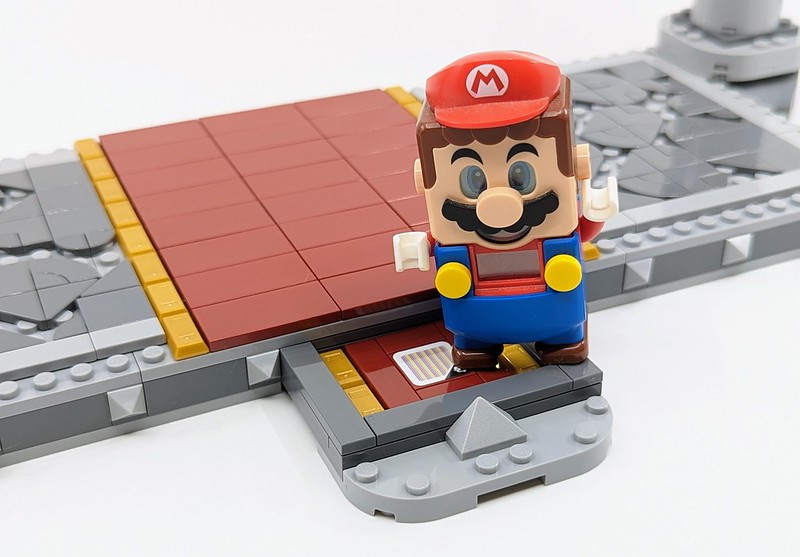 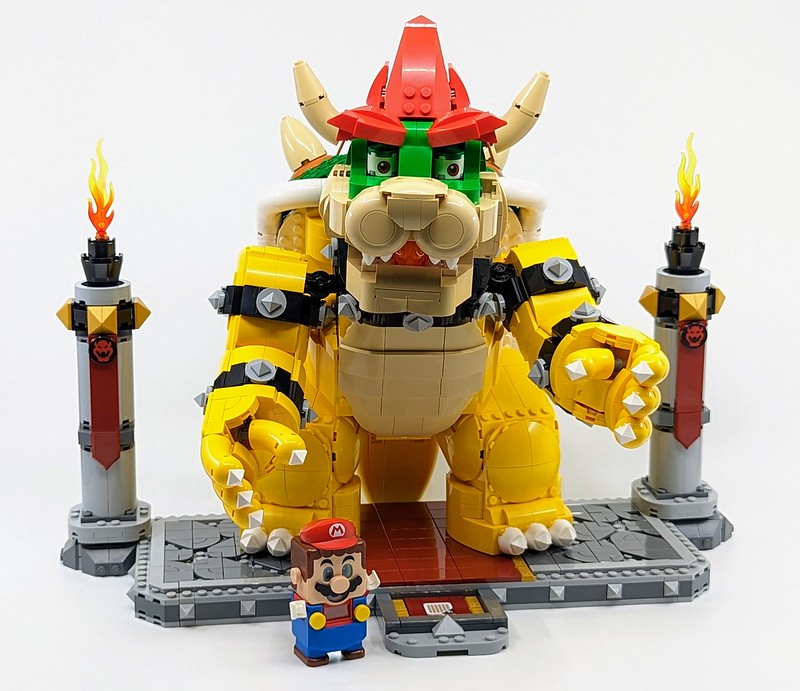 One of the key features of the larger Mario sets is their working components and Bowser is no different. His innards are as complex as the ‘?’ block set build, but there is a unique mechanism inside Bowser. This provides two working functions both connected to the head. A block through the midriff of the Bowser is used to turn the head and the other is a pair of tabs, which can be pushed back to raise the head. Fully pushing will cause Bowser to open his mouth and blast off a fire bolt. This is mounted within the head and uses a spring-loaded brick to hold and deploy the flame-tipped bolt element. Another function is inspired by puppetry and requires a less involved set-up to achieve. The tail and legs are connected in such a way which would be best described as floppy. Picking up Bowser causes these parts to dangle but set it down on a surface and they settle in place. 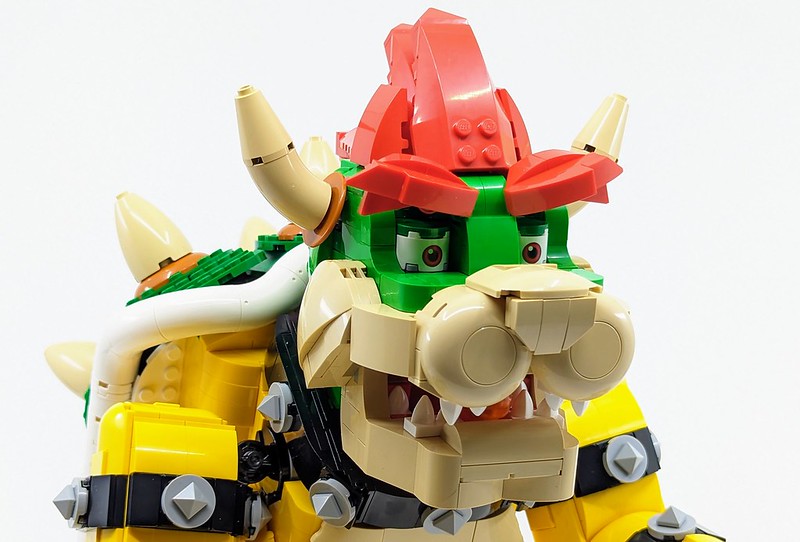 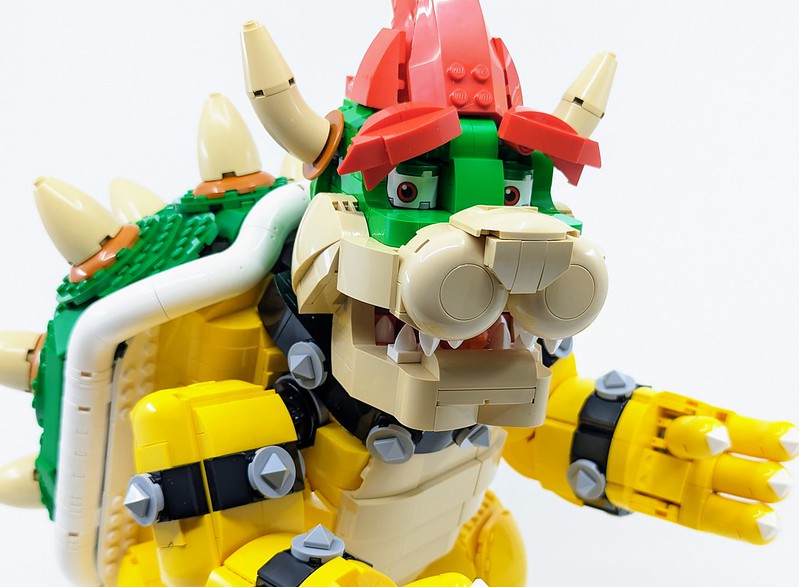 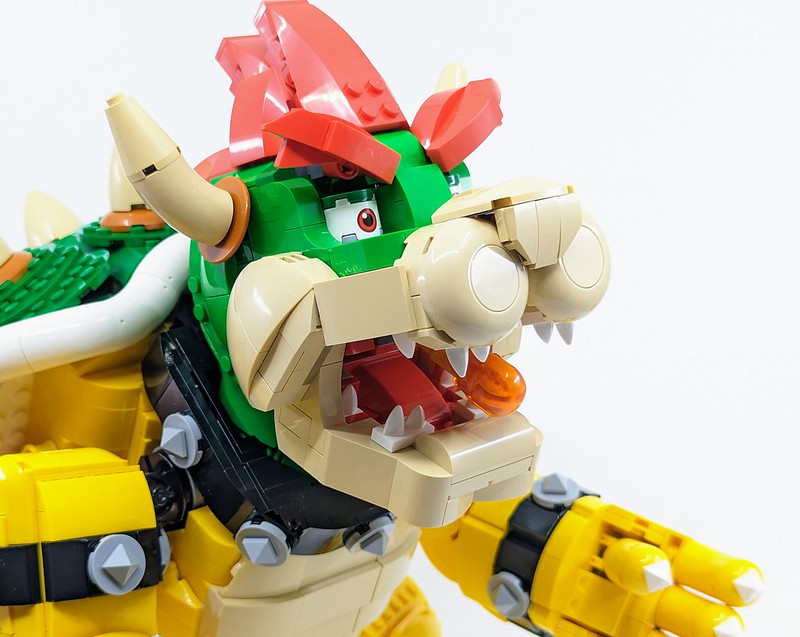 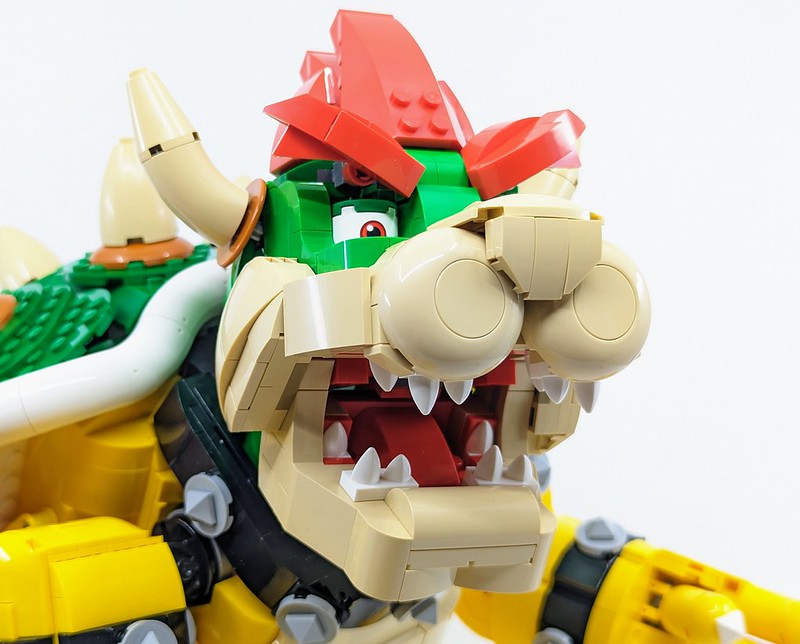 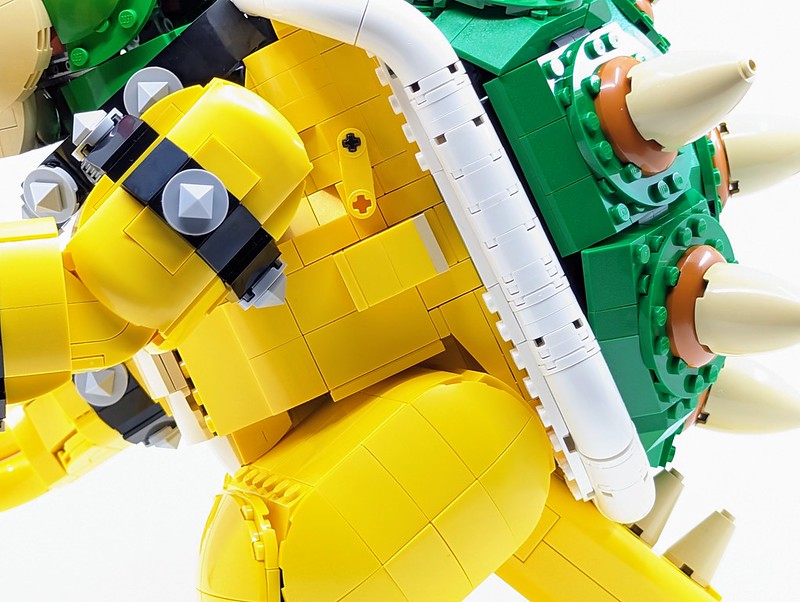 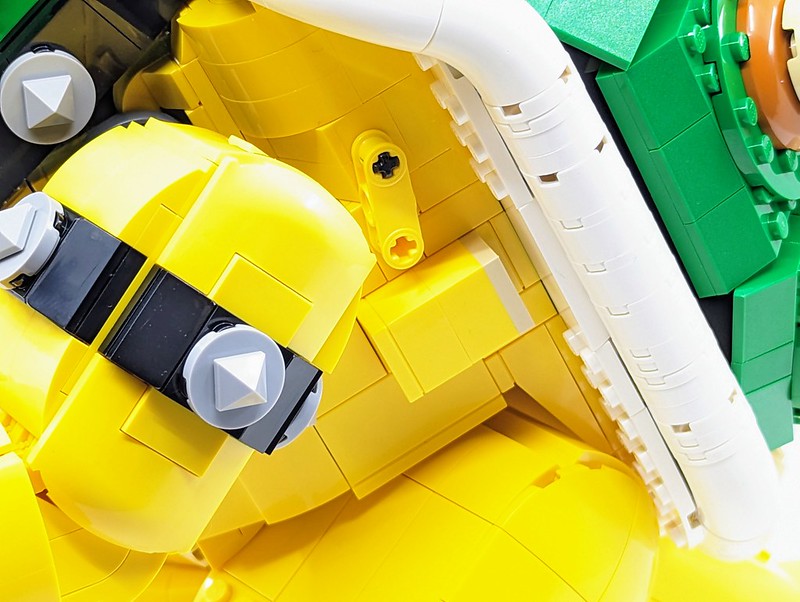 With the core of the build complete, the rest of the set is added around it. The most detailed section has to be the head. Various elements used perfectly suit the parts of the character, they are meant to be recreated. Considering Bowser is such a round character, his mass has been extremely well achieved with LEGO bricks. This is particularly evident with Bowser’s large turtle-like shell. This is created in three sections which are added to the back of the character. New cone-like elements are used to create the spikes which line his back and a continuous border of tubular LEGO elements is used to frame the shell. 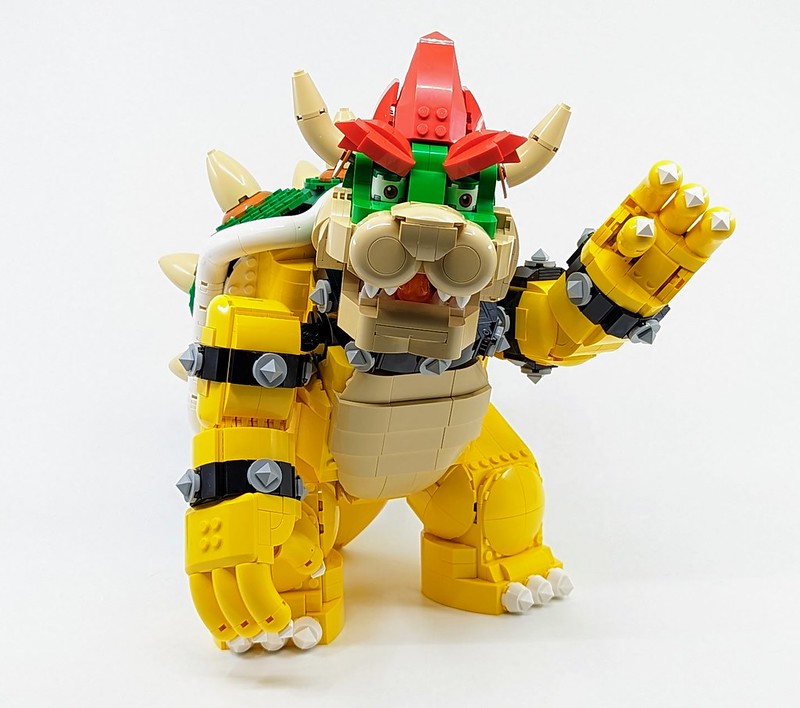 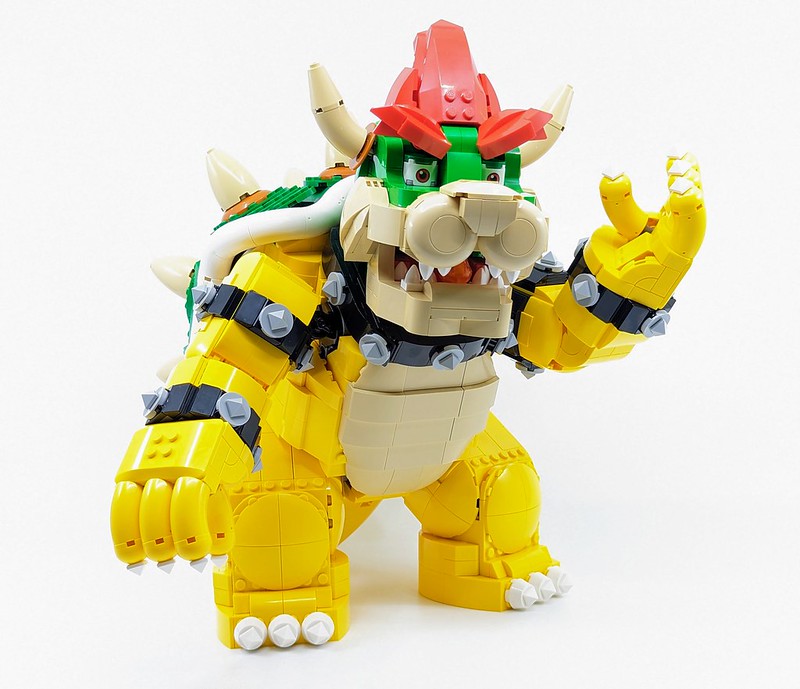 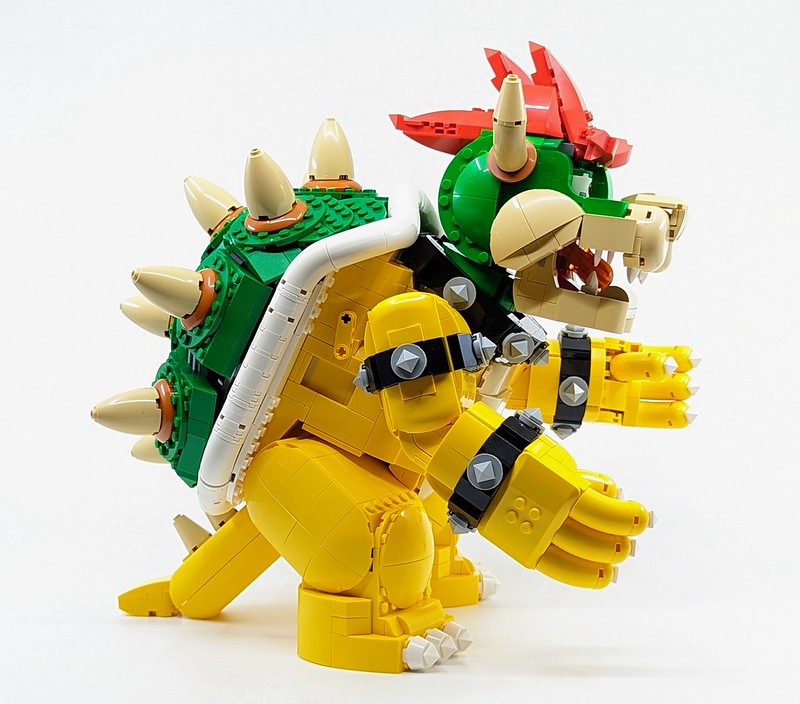 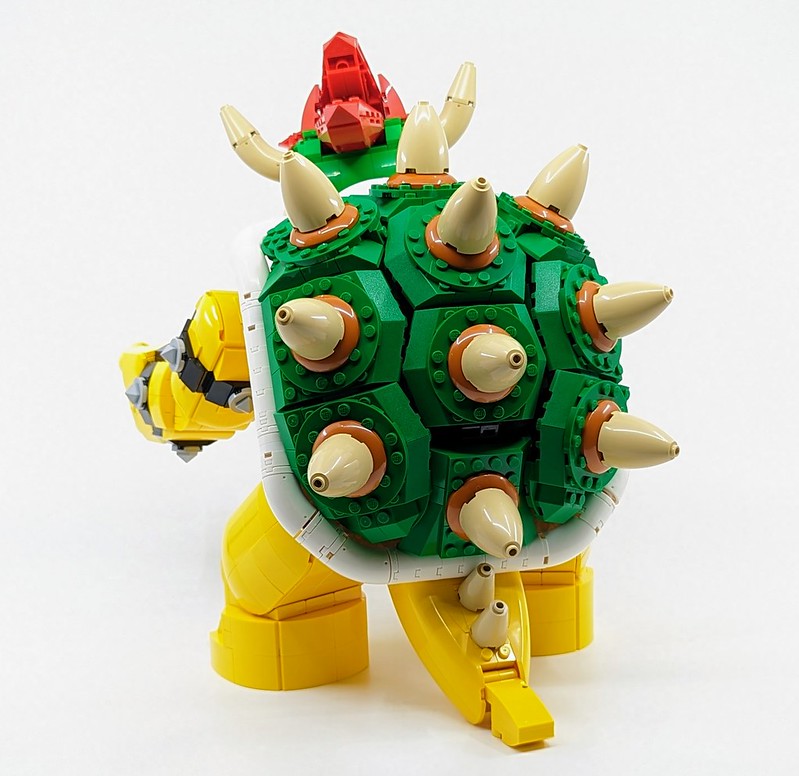 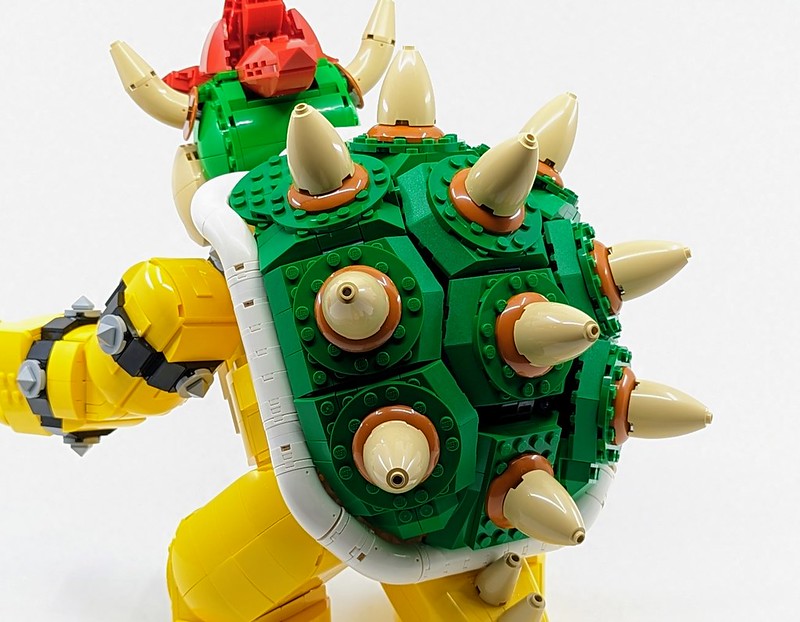 LEGO Bowser features a surprising amount of movement beyond those mentioned above. Both arms can be moved at the shoulder as well as the elbow and the hands can be twisted. This combined with the ability to position Bowser’s eyes and eyebrows infuses the build with some much character. The overall size of the character is perfect not only for the level of detail it offers but also for being a sensibly sized display piece. Admittedly, it does dwarf the interactive figures. But King Koopa’s scale has always been comparably questionable to Mario’s over the years. 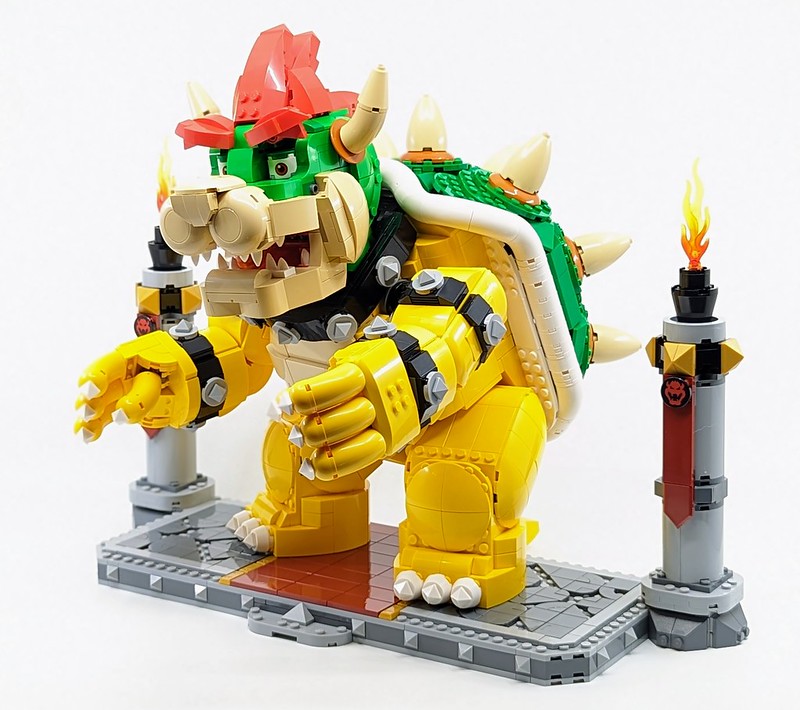 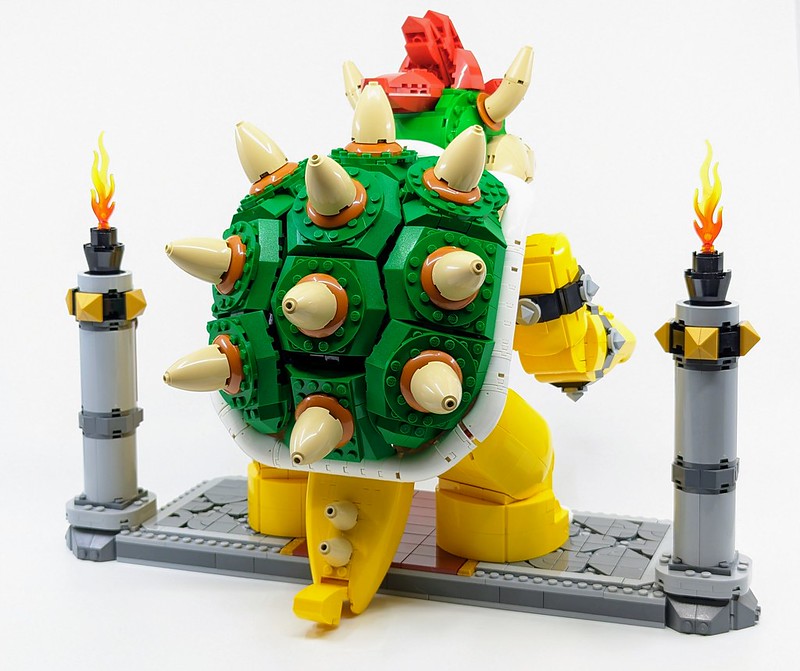 Of the three large-scale LEGO Super Mario sets, this is my favourite and probably is closer to a ‘traditional’ LEGO set compared to the NES and ‘?’ Block sets. Although they may seem a little more exciting due to their hidden functions, LEGO Bowser is just as impressive thanks to its working elements and use of parts. It’s quite expensive and the cost could have been mitigated by the omission of the display stand. But it does finish off the set nicely as well as housing the scannable tile to tie the set to the overall Super Mario theme.

– Quite expensive
– Base offers little purpose