The LEGO® Super Mario range of expansion sets come in various sizes and one of the biggest to be released so far is inspired by the regal palace of Princess Toadstool. With Princess Peach joining the interactive figure line-up, it’s only to be expected that her palace would get the LEGO treatment. Peach’s Castle has been long-rumoured but as one of the larger scale Mario models similar to the NES, Question Mark Block and the upcoming Mighty Bowser. Instead, it’s been brought to life as Expansion Set. How does Peach’s Castle compare to the rest of the LEGO Super Mario sets? Here’s a closer look at the Peach’s Castle Expansion Set. 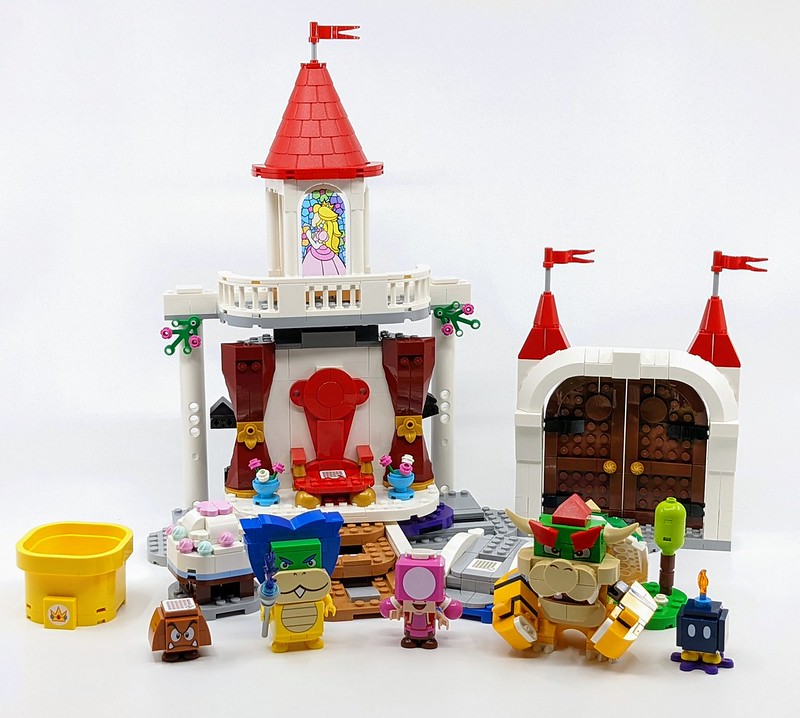 Let kids add an iconic location to their LEGO® Super Mario™ universe with the Peach’s Castle Expansion Set (71408). There is so much for players to explore and many ways to earn digital coins with their interactive LEGO® Mario™, LEGO® Luigi™ or LEGO® Peach™ figures (not included). It features a throne room with a spinning wall to reveal Bowser, Peach stained-glass window, a Bob-omb painting with an Action Tag, cake with a Goomba hiding inside, Special Pipe: Peach’s Castle, Time Block, ‘broken’ bridge, fruit bowl with a purple fruit and more. (Note: the 71360, 71387 or 71403 Starter Course is required for interactive play.) 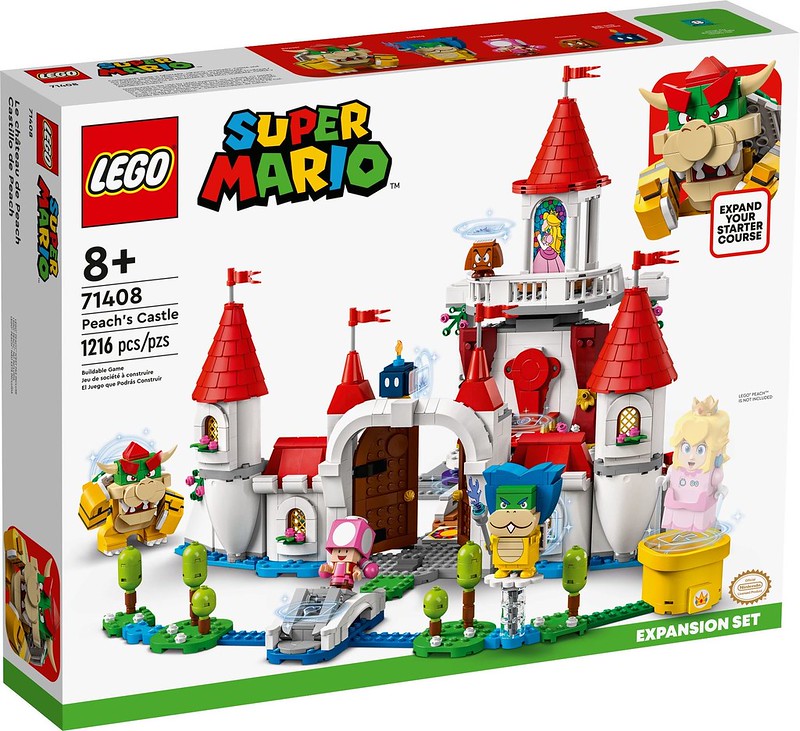 The Mushroom Kingdom has been the iconic home to Mario’s many adventures since the 80s. Castles have played a key role in those games from the very beginning. Peach’s Castle actually debuted in an obscure Japanese cartoon from the late 80s, but its most iconic appearance was in the Nintendo 64 classic, Super Mario 64. This transformed the castle into a fully-explorable 3D building, which was the first thing players are greeted with when loading up Mario 64. This version of the castle acts as inspiration for this new Expansion Set. 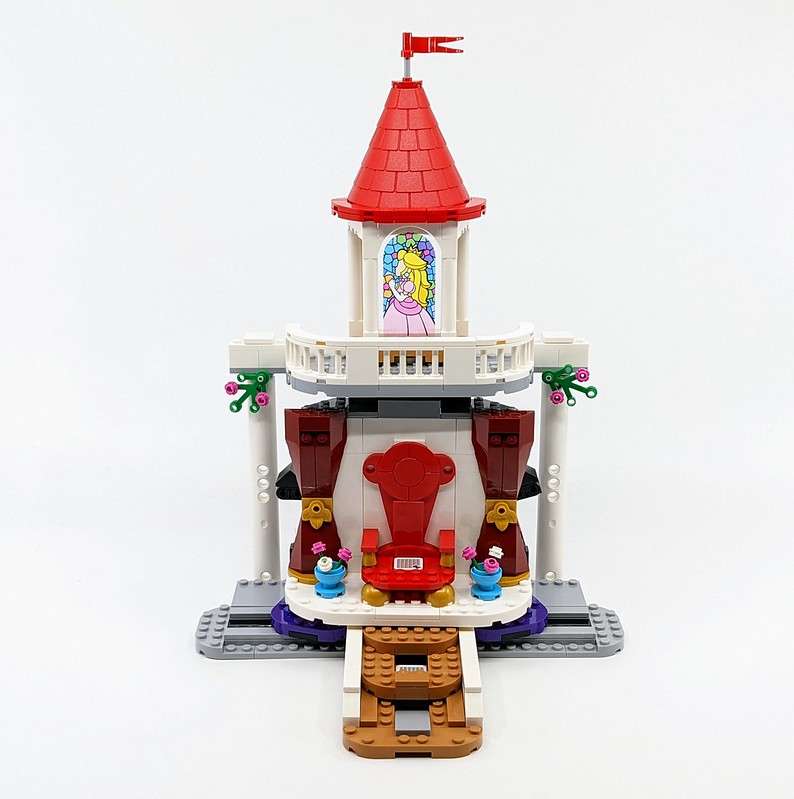 As quite a big expansion set, in fact, the biggest of them all so far, it’s made up of a number of different elements. These include the throne room, Castle walls and gate, as well as characters including Bowser and Toadette. The biggest section of the whole set is the royal throne room. This has a very cool play feature in which the central plate of the room can be pushed to flip the throne platform around to reveal Bowser. It’s a clever function and nicely tied to the game, where Bowser can be confronted in the depths of the Castle. Above the throne room is the Castle’s iconic tower, which features a clear window panel showing the stained glass window of Princess Peach. 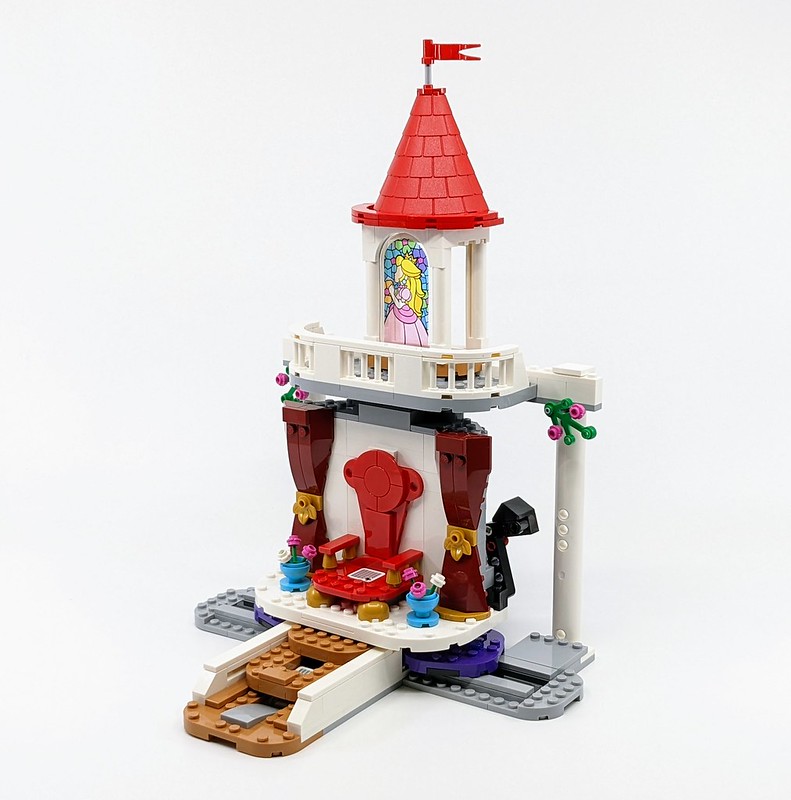 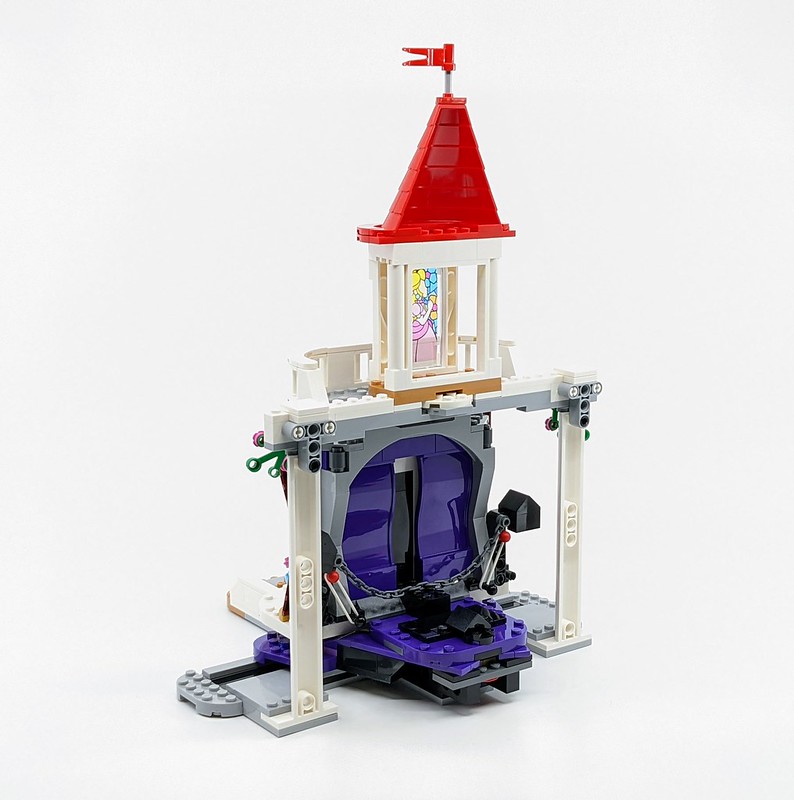 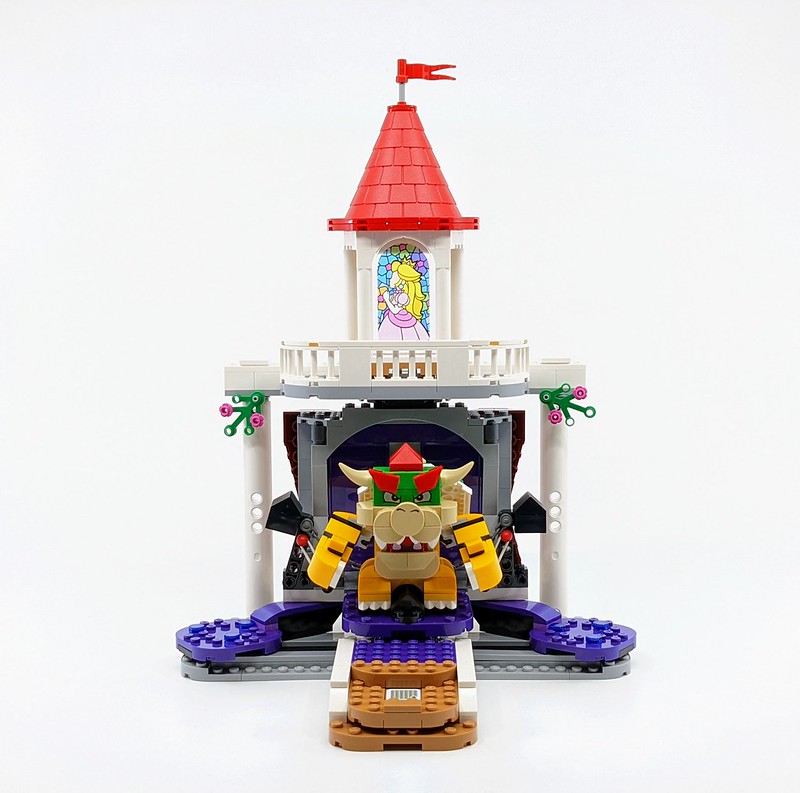 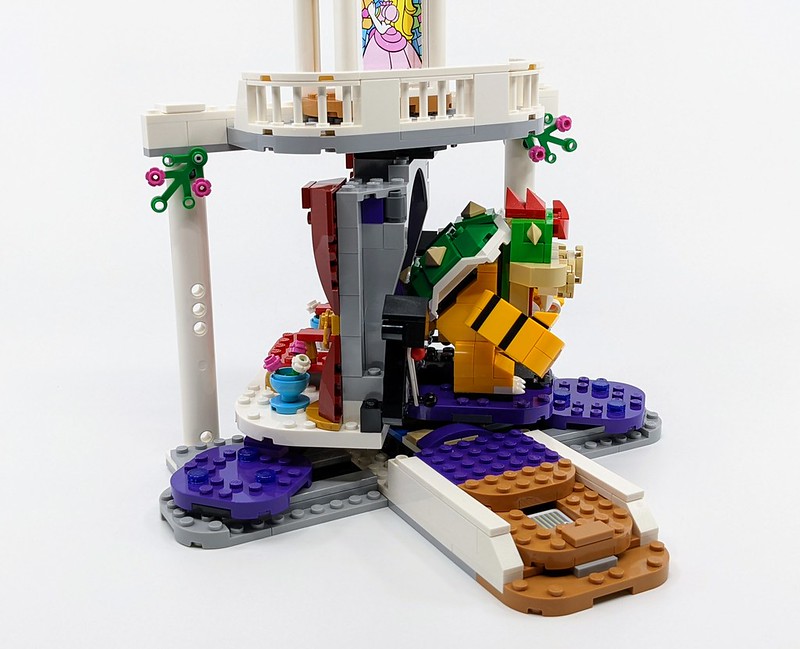 Surrounding the throne room is the castle’s walls. This is made up of a set of gates and two walls, all of which are built separately. Each of the wall sections has detail on the outside and inside. These include an interesting new egg-like panel used to create the base of the outer towers. The white walls and red roofing turrets perfectly capture the look of the castle from the games. But it’s inside where things get even more fun. The interior side of the walls acts as the inside of Peach’s Castle, which little nods to the game’s memorable location. One wall features a 4×4 printed plate showing the Bom-Omb Battlefield painting. The opposite wall is a little less exciting with a Grandfather Clock and an extra time block. There’s also another printed tile found here, which recreates the unique circular rug found as soon as you step into the castle. 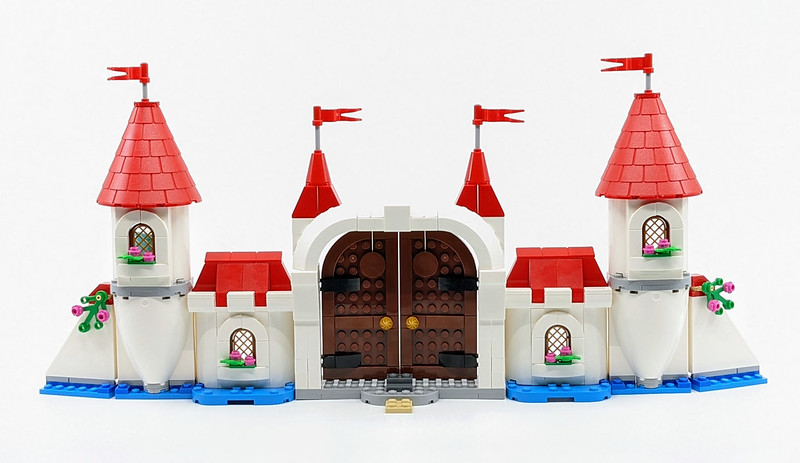 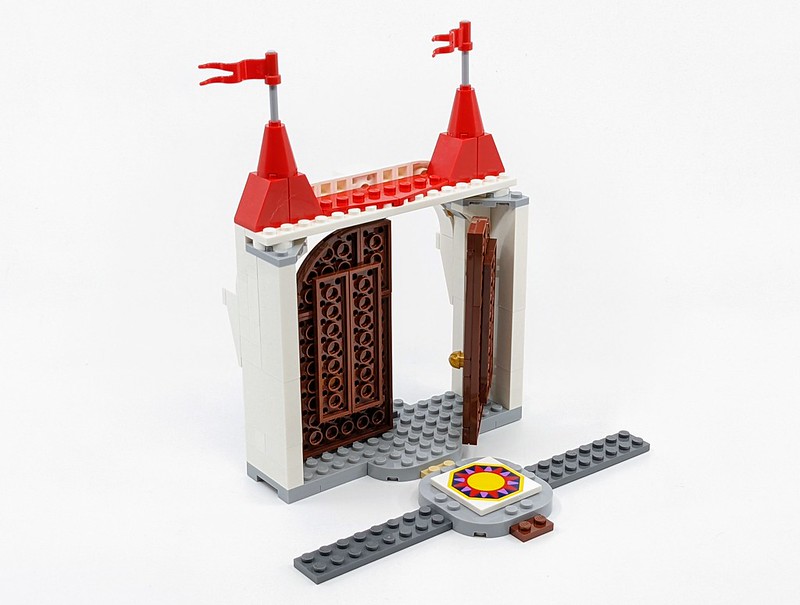 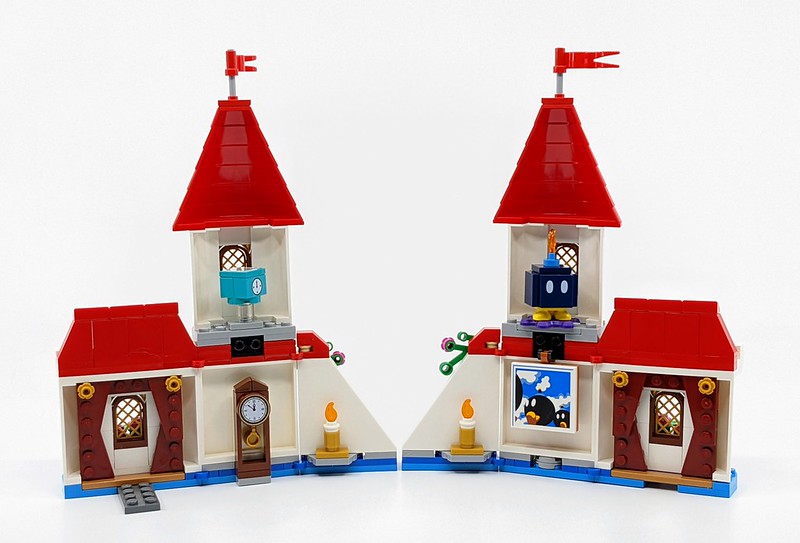 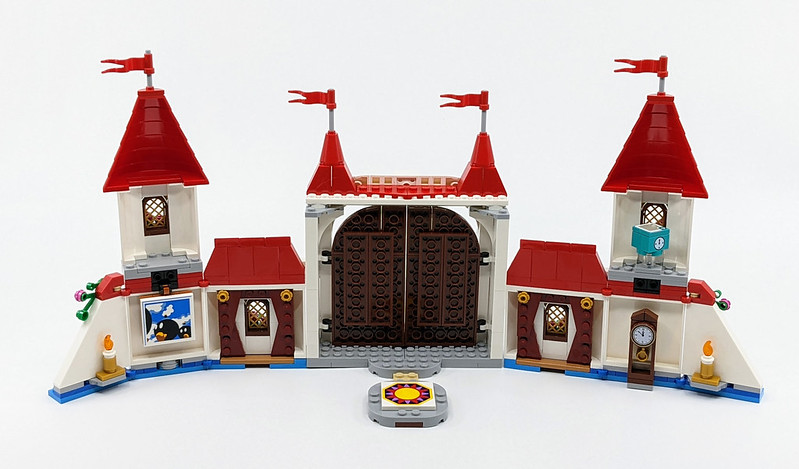 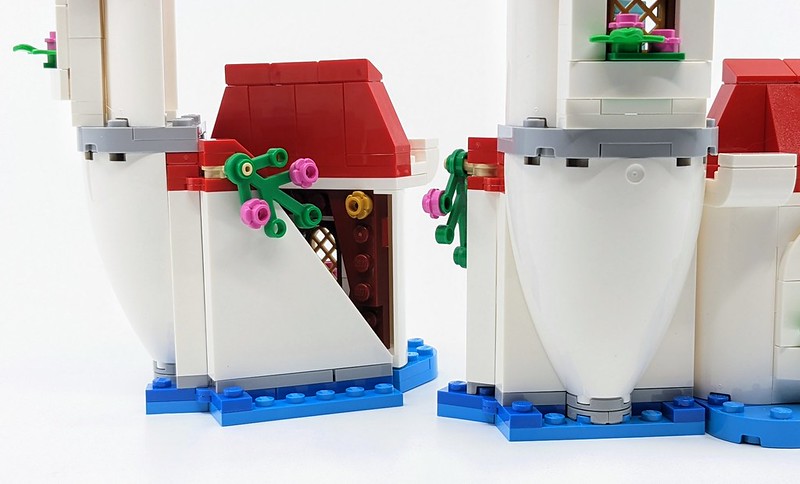 Also found inside the castle are a pair of small platforms. One features a fruit bowl and the other a tasty-looking cake, which hides a Goomba inside. The rest of the buildable elements of the set are found outside the castle walls. These include a little bridge, where Toadette can be found. This is flanked by a number of smaller platforms, as well as a special princess start pipe and a cloud platform featuring another Koopaling in the form of Ludwig

As the largest expansion set, it features 11 Action Tags. These activate different play features such as the ones featured on the unique start pipe, Bom-Omb Battlefield Painting and throne room. Others are tied to characters such as Toadette’s bridge and on the shells of Bowser and Ludwig. There’s also a fruit Action Tag, which is new for this range of Expansion Sets. This gives bonus coins when ‘eaten’ or can be given to other characters for a bigger bonus. 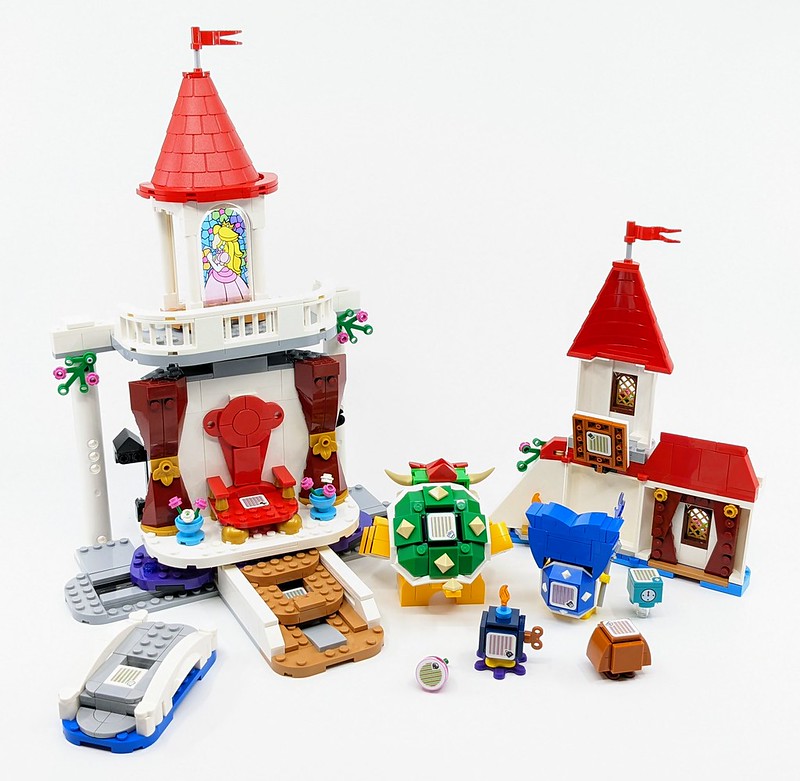 Buildable characters featured in the set include Bowser, Ludwig, Toadette, a Bom-Omb and a Goomba. Bowser has previously featured in the Bowser’s Castle expansion set, this build is exactly the same, although it makes use of the new half 2×2 round tile for the cheek section. So it makes it a slightly improved version of King Koopa. He’s joined by another member of the Koopalings. I like that their build is pretty much similar for each character, yet manages to capture their unique appearances. These named minions have been popping up in various sets and the clan is almost complete. Hopefully, the final members are featured in future sets before the theme ends. Toadette first appeared in the large Toad-themed set from the first wave of sets, as with the Goomba and Bom-Omb characters, the build for Toadette is exactly the same as previous versions. 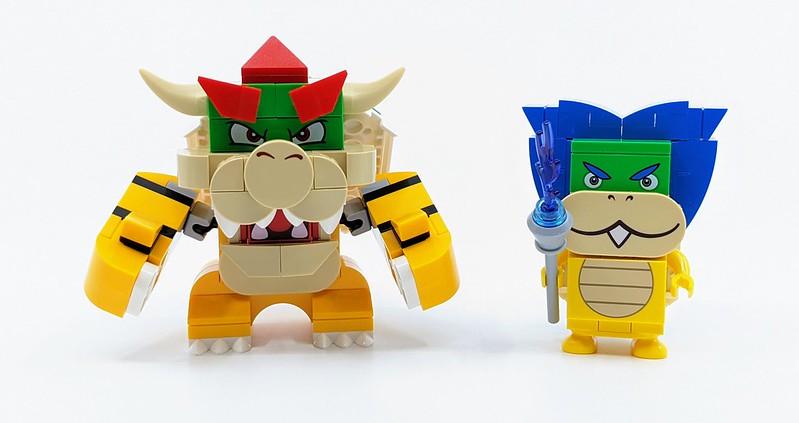 The Mario sets are less about the build experience and more about how they expand on the playability of the overall Mario theme. This is a nostalgic expansion of the theme. One which fans of the N64 game will enjoy. The castle is interesting to build but offers little as a set on its own, especially at the price point. Most of the functional elements of worth are found in the throne room. Still, you couldn’t introduce Princess Peach without her castle.