The LEGO® Super Mario Character Packs have introduced all sorts of friends and foe from across the Mushroom Kingdom. They often include some of the lesser-known ones and this is the first series to really offer something unique as all the characters are new faces and not simply variants of previously seen ones. Similar to LEGO Minifigures, these blind bagged mini sets feature one of ten different collectible characters from a range of different Super Mario games. But who appears in the fourth series of characters? Here’s my review upcoming new series of LEGO Super Mario Character Packs.

Create even more action-packed levels with collectible toy Character Packs – Series 4 (71402) for ages 6 and up. Each pack contains a mystery, buildable character with an Action Tag, plus a small build to use as a display stand or to enhance play. There are 10 LEGO® Super Mario™ characters to collect: a Mechakoopa, Para-Biddybud, Stingby, Bully, Freezie, Ant Trooper, Goombrat, Coin Coffer, Scaredy Rat and a baby penguin. Each is designed to be used with a Starter Course set (71360 or 71387), which is required for interactive play. 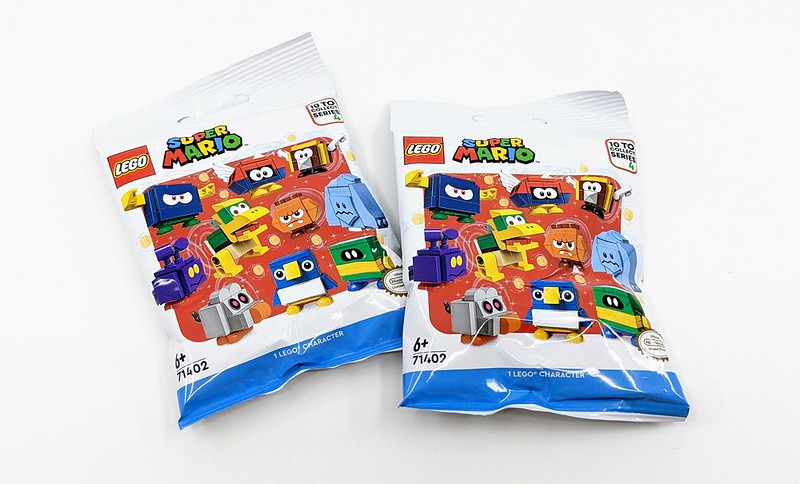 Although these Character Packs don’t feature any of the big guns, they are a great place to find some of the weird and wonderful bit players. For this series we are treated to a range of all-new characters, meaning they haven’t appeared in other sets nor are they variants of other characters. Each of the characters is entirely brick-built and features printed elements, with not a sticker in sight. They also include the pre-applied Action Brick tags, these provide coins, power-ups and extra lives when scanned by both LEGO Mario and LEGO Luigi. They also include a themed display base, which shows off the various characters in a cool way and allows them to be easily incorporated alongside other LEGO Super Mario Expansion Sets. 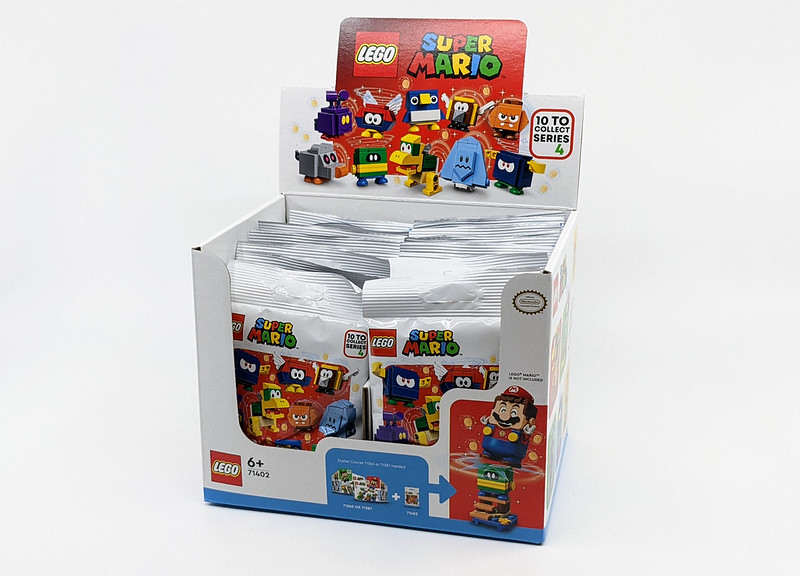 These display bases use a unique island plate and are themed to different biomes, found across the LEGO Mario sets and also recognised by the LEGO Mario and Luigi figures. So there you’ll get yellow for desert, blues for water plus the sky, red for lava, green for grassy areas, light brown plate interior area and white for snow. 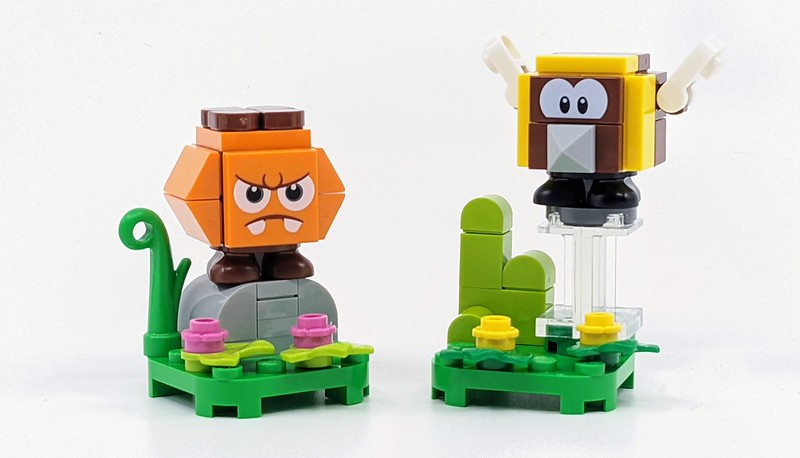 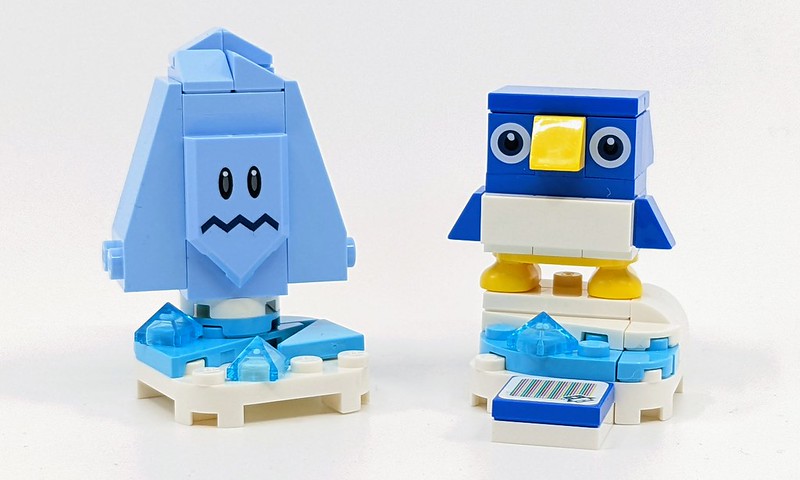 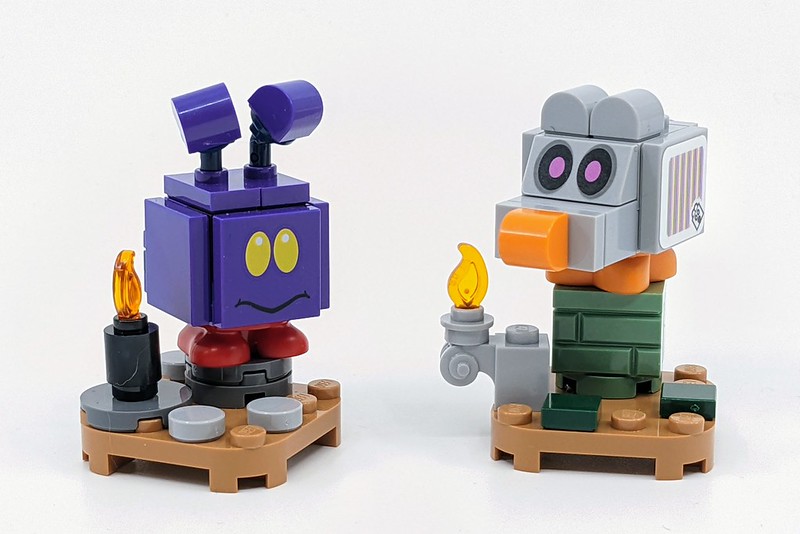 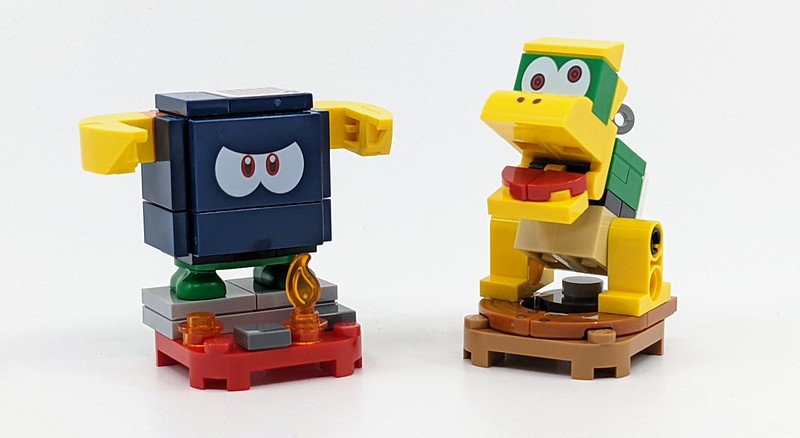 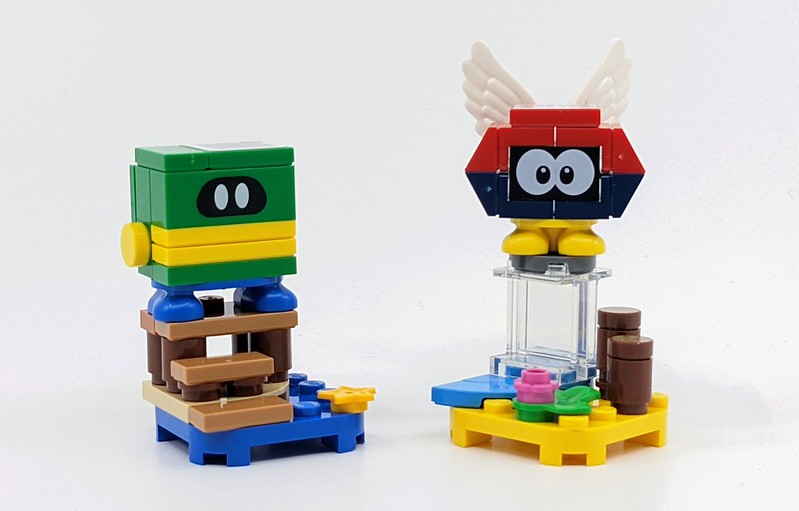 Although the inspiration for most of the LEGO Mario sets comes from the original 1985 game, the Character Packs have enemies from NES days right through to more modern Nintendo Switch outings. So here is a look at all ten characters found in the blind bags.

Mechakoopas first appeared in the 1990 SNES game, Super Mario World. They are styled as mechanical versions of Bowser but have since become more similar to standard Koopa Troopa goons, although they look a little wackier. Their wind-up toy appearance translates nicely into its brick-built form, with the Technic anchor pegs making perfect legs and the key piece representing the wind-up piece. Printed pieces include the eyes and beak, plus the curve wooden track on the base. Action Brick gives coins away the Mechakoopa has been hit once. 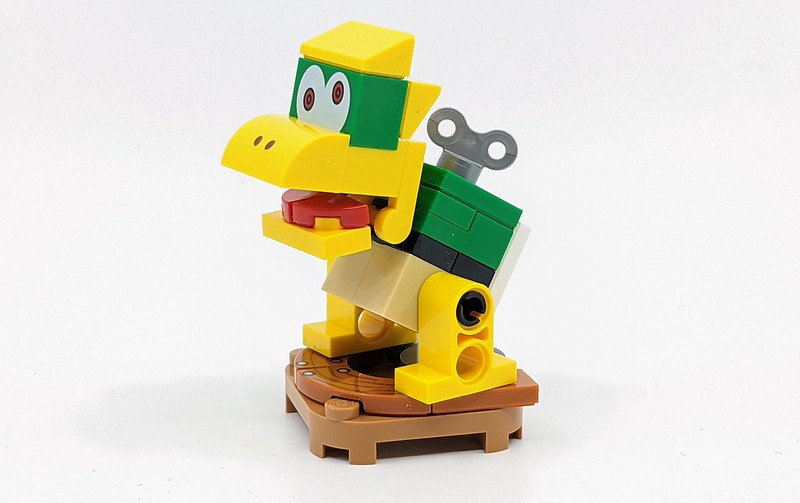 Para-Biddybuds are a fairly recent addition to the Mario series, making their debut in the 2011 3DS game, Super Mario 3D World. They are best described as Curling Stones with wings and often appear in groups in the games, where they are also shown as being different colours. A red version has been chosen for the LEGO version. Printed pieces include the eyes and the sloped bricks on the body. The tops of the wooden stumps, also feature printed 1×1 tiles. Its base appears to be based on a beach area, with yellow sand and a splash of water. The Action Brick gives coins when scanned. 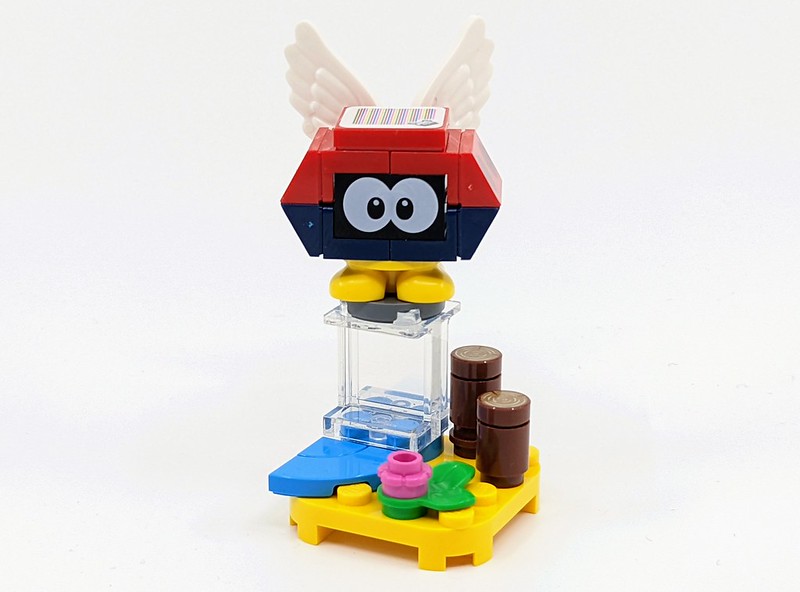 The bee-like Stingbies also made their debut in Super Mario 3D Land on the 3DS and like their name, appearance and attack suggest, they are the Mushroom Kingdom’s version of a bee. Their brick-built counterparts certainly aren’t as menacing in looks as their in-game versions. With the lone printed piece of the eyes being a little too cute. The little clip studs perfectly recreate the characters extremely tiny wings. The Stingby is mounted upon a couple of clear stands to give the illusion of flying. Scanning the Action Brick will earn you a coin. 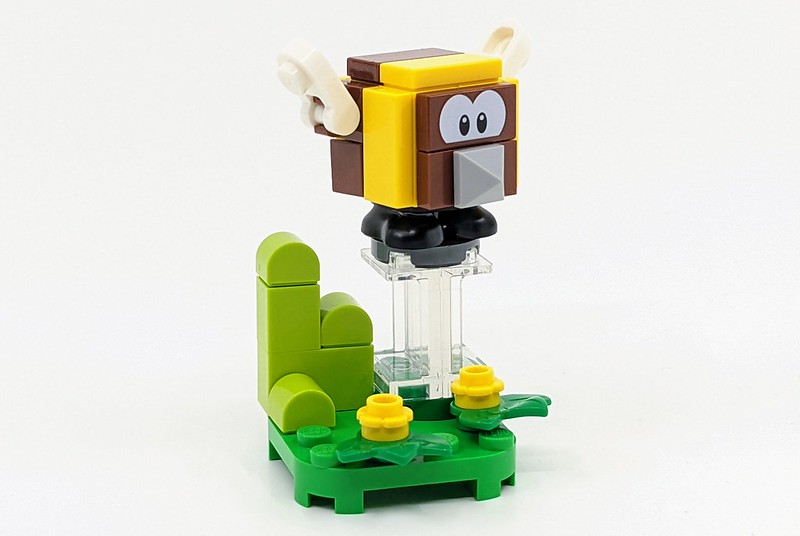 Bullies first appeared in the seminal N64 classic, Super Mario 64. Since then, their appearance has changed a little, mainly they have switched from black to dark blue and the angle of their horns has changed. The brick-built version is a blend of both, s the body is dark blue but the horns are yellow instead of gold, although they are facing forward. The only printed piece is the eyes, which are modelled after the recent versions of the character. Its base is a lava plate, with a stone wall, the studs on this are those with the recessed centre, which should allow the feet of the Bully to connect to them. However, there’s zero clutch power between them. Action Brick requires you to do a flip with LEGO Mario or Luigi before hitting it, where you’ll get a handful of coins. 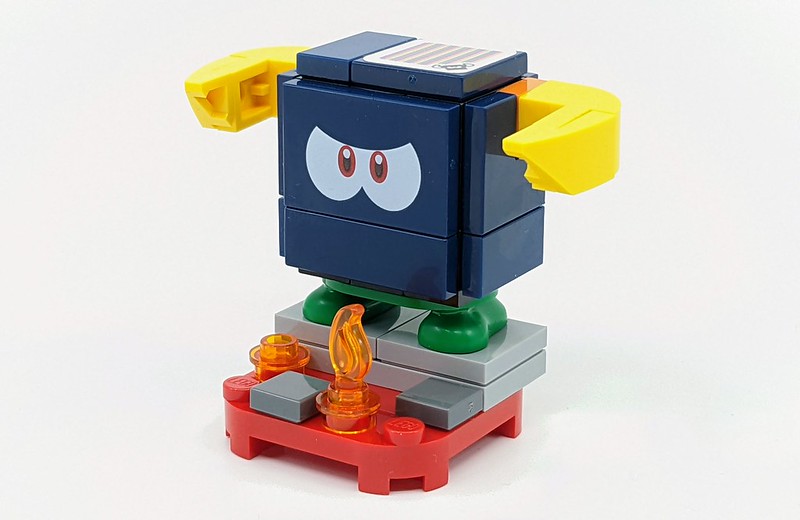 These icy foes are proper OG, making their first appearance in the very first Mario game, Mario Bros. In the arcade classic, they would freeze platforms and in further appearances, they would also freeze things. The LEGO version is a fairly big character and one of only two to use a white snowy platform. A NEXO Shield is used for the face and is the only printed element. Hitting the Action Brick will temporarily freeze LEGO Mario or Luigi. 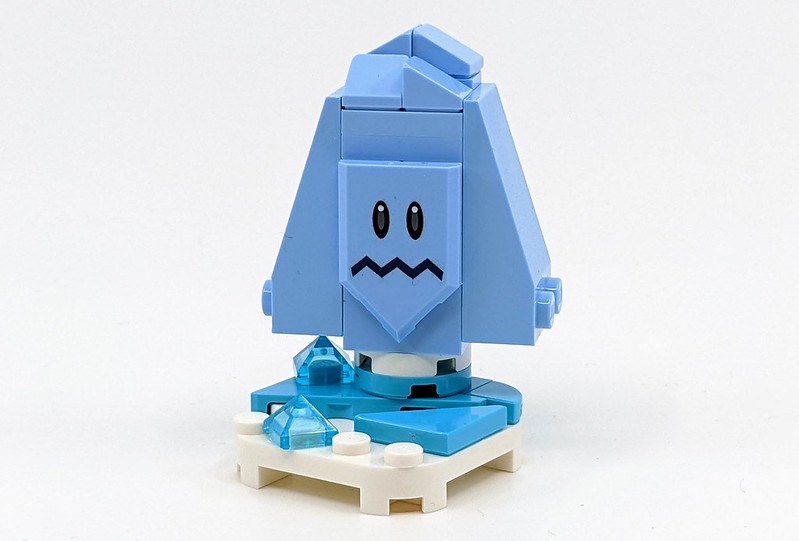 Ant Troopers are another modern-day addition to the Mario series of games, which first appeared in Super Maio 3D World on the Wii U. In-game they can walk across vertical surfaces, in their brick-built form, they offer a coin when their Action Brick is scanned. There is a slight difference in the appearance between the LEGO version and the one found in the games, as the LEGO version is missing the striped body. However, I do like the recoloured Minifigure pose pegs being used for the antennae. 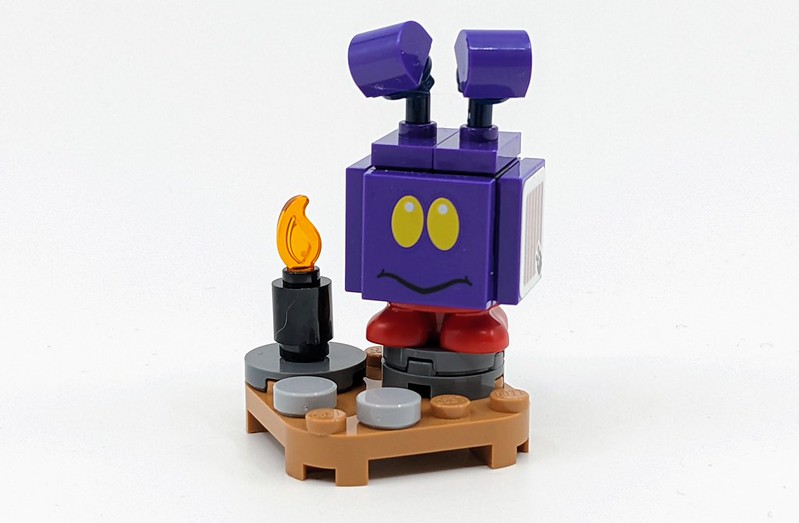 Goombrats are a rather obscure Mario character, having debuted in New Mario Bros. U on the Wii U and not really appearing in many other games since then. In fact, the Goomba variants have only appeared in a couple of spin-offs such as Super Mario Run and Super Mario Maker. They are smaller than Goombas and have the ability to turn around at the edge of platforms. The LEGO version is built differently from past LEGO Goomba and the Action Brick, which gives a coin when scanned is placed on the back instead of its top. 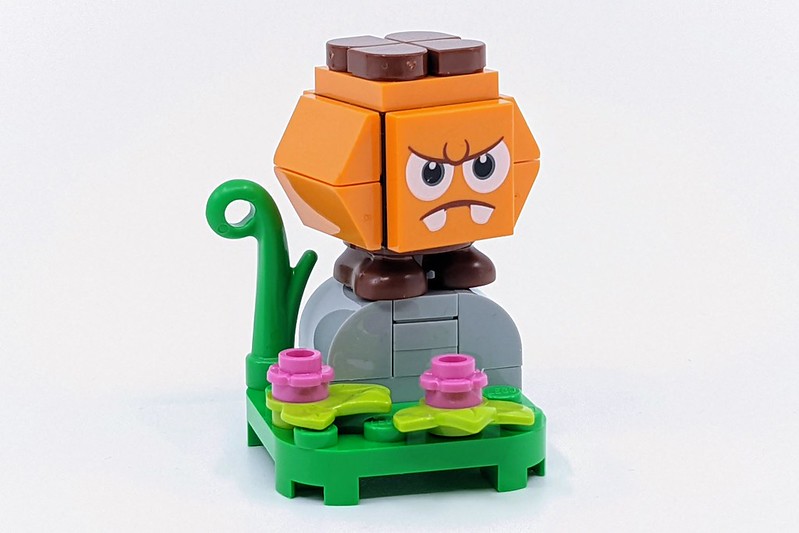 Coin Coffers are another character that hasn’t appeared in many games since its debut in Super Maio 3D Land. They replaced the Moneybag foe from Super Mario 64. They are best described as a combination between a frog and a purse. The LEGO version is a lot less curvy compared to the game versions, but the cubic appearance works nicely with the rest of the Mario theme. It features one printed piece for the eyes and the Action Brick give quite a few coins. 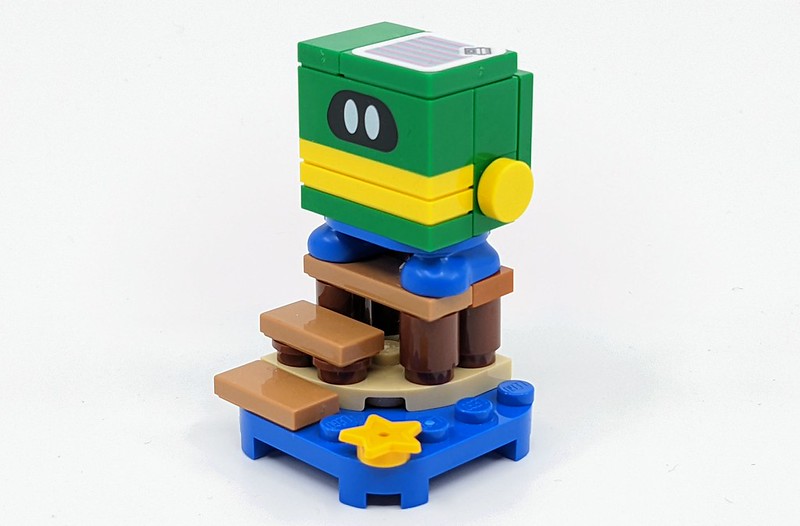 These rat-like creatures in New Super Mario Bros. Wii but have featured heavily in the excellent Paper Mario games as well as other Mario spin-offs. The brick-built version seems a little darker in colour, but it looks great, with a bull horn being the perfect element to recreate its tail. There’s one printed piece, which is a 2×1 slope featuring its eyes, with the Action Brick giving you a coin when scanned. 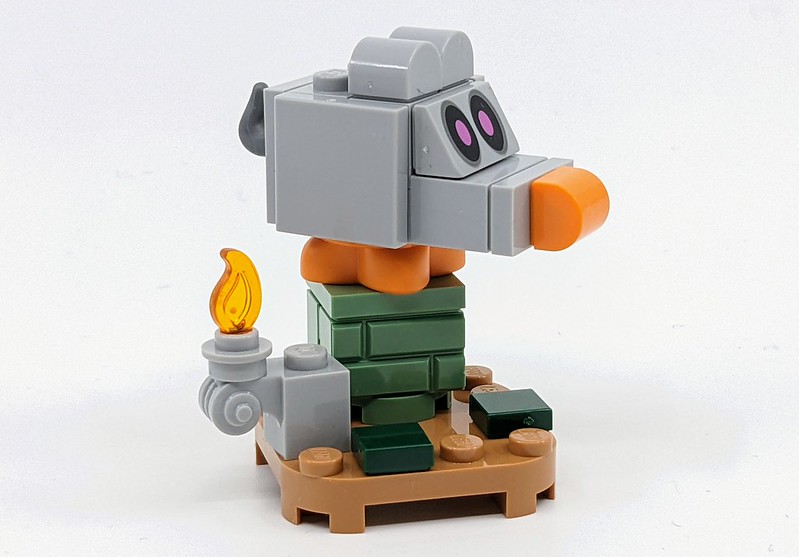 The Baby Penguin is an infamous Mario character, making their debut in Super Mario 64. One particular penguin called Tuxie can be found wandering around Cool, Cool Mountain and needs to be reunited with its mother to gain a Power Star. The LEGO version is the only non-threatening character, because of this the Action Brick is located on the display plate and gives you an extra life when scanned. It’s another character that is hard to translate from its game version to brick-built, but it’s still a cute little build. 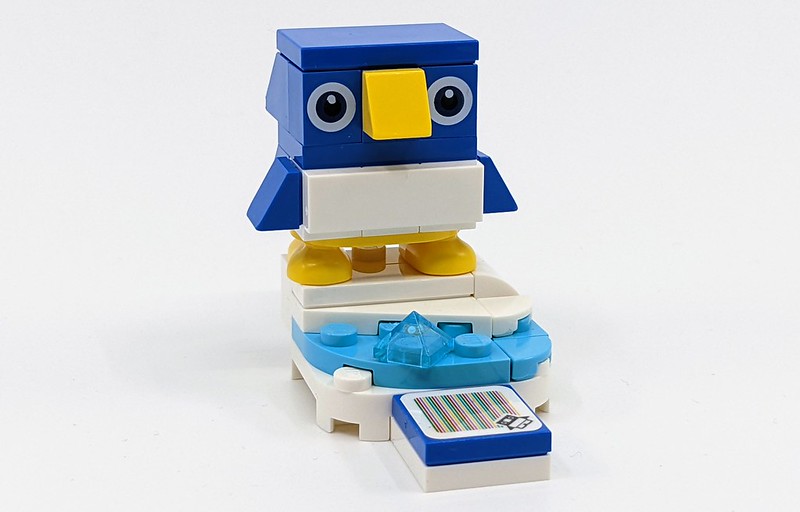