It’s not just Luigi getting in on the LEGO® Super Mario Expansion Set action this January, as his big bro is back with a couple of sets of his own. They are quite the opposite of the dark and spooky offering from Luigi, as Mario’s sets take the plucky plumber to the sunny beaches of the Mushroom Kingdom. The smallest of the two Mario Expansion Sets is Dorrie’s Beachfront. As the name suggests it gives off some sunny vibes and includes a brick-built version of Dorrie. So here’s a closer look at the set. 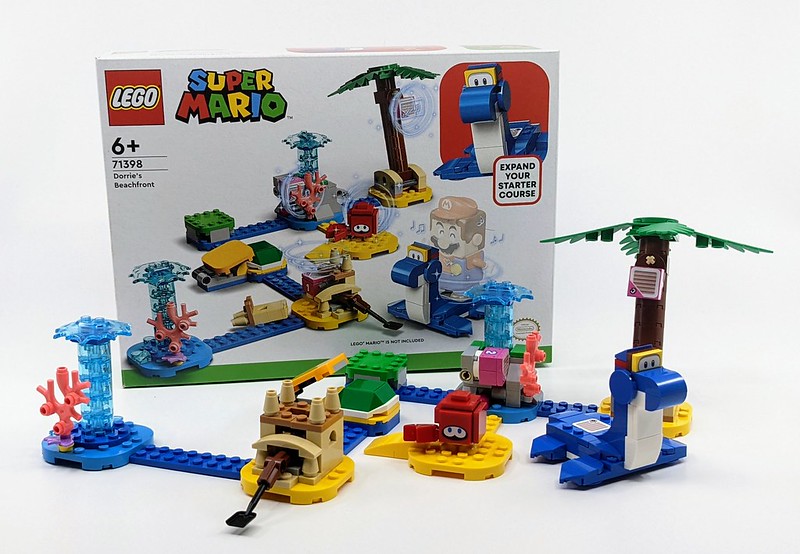 Add a colorful beach level to the LEGO® Super Mario™ universe with the Dorrie’s Beachfront Expansion Set (71398) for ages 6 and up. It features a Dorrie LEGO figure, which LEGO® Mario™ or LEGO® Luigi™ (figures not included) can ride on. There is a launcher to flick a green shell at the Huckit Crab figure, plus a buildable sandcastle, water fountain and tree, each with cool functions that the player must activate to access the 1, 2, 3 Blocks. (Note: the 71360 or 71387 Starter Course is required for interactive play.) 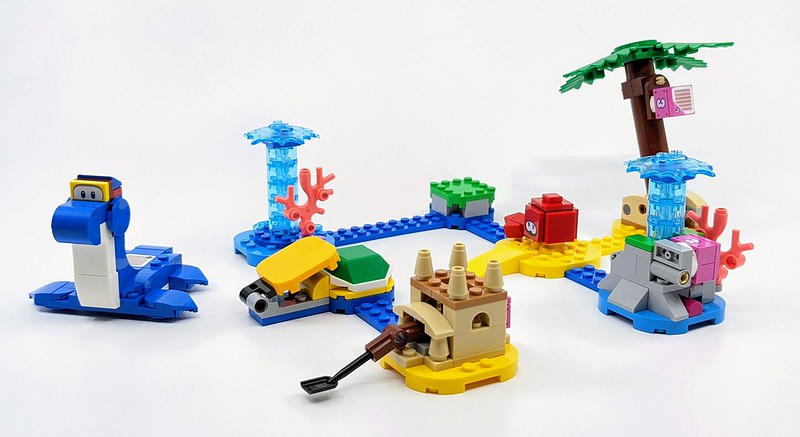 Dorrie first appeared in Super Mario 64, where the rideable beast could be found in Hazy Maze Cave. Since then the creature has been given a makeover to appear a little more cartooney. It would seem the LEGO version is based on the design used in New Super Mario Bros. as well as the DS version of Super Mario 64. Dorrie features an Action Brick on its back, upon which LEGO Mario or Luigi can be placed to activate the ability to collect more coins. As you ‘swim’ Dorrie around with someone in tow, a tune will play and you’ll bag plenty of coinage. 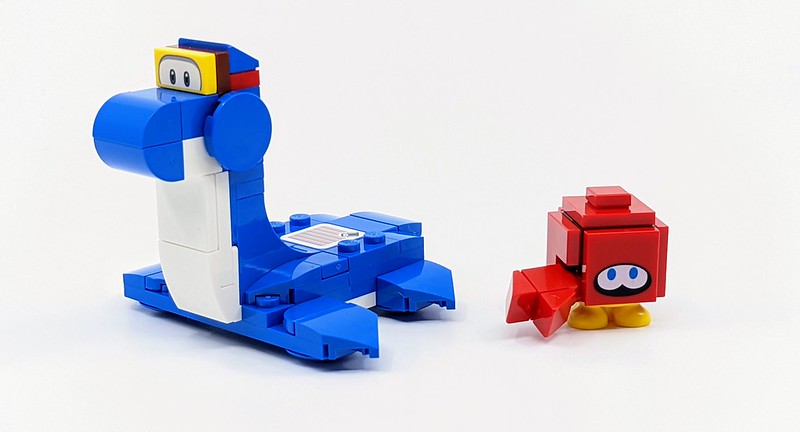 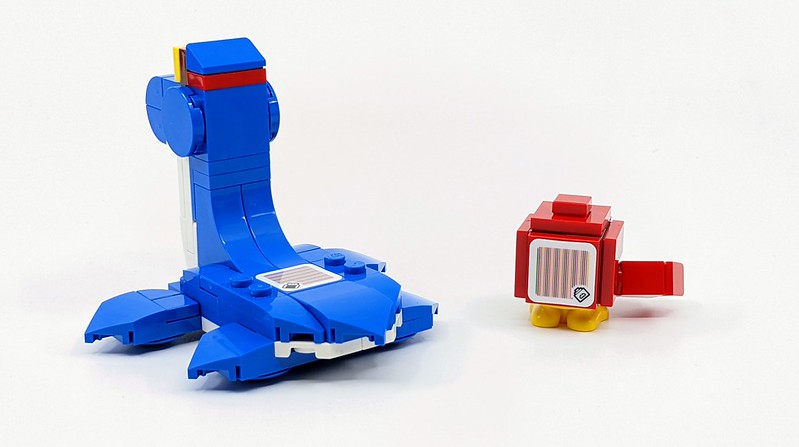 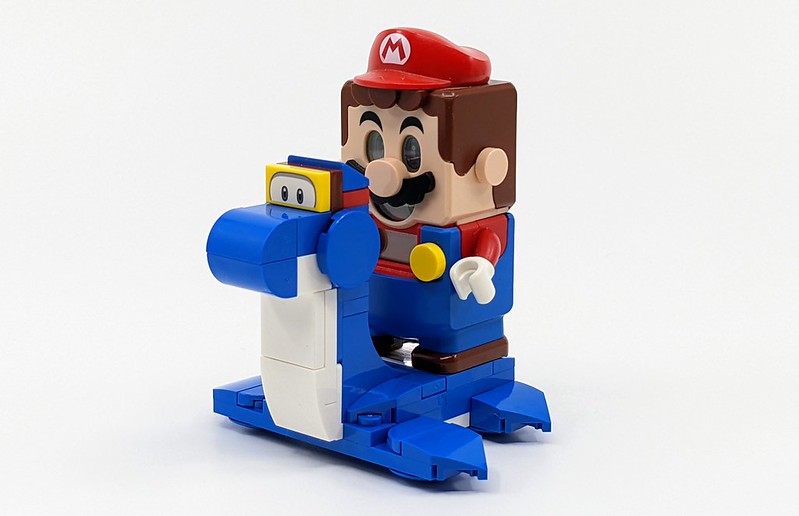 Another playable element of the expansion set is a set of three numbered coin boxes. These little pink boxes are hidden around the set and if hit in order and quickly you’ll get a score bonus. One box is found within the Sandcastle, hitting the spade with force it to split apart revealing the box. The second is on one of the water jet platforms, there’s a grey Technic beam, which flips the box up and the final box is latched onto the palm tree. This is mounted in such a way to allow it to tilt. Pushing it will cause the final box to drop. 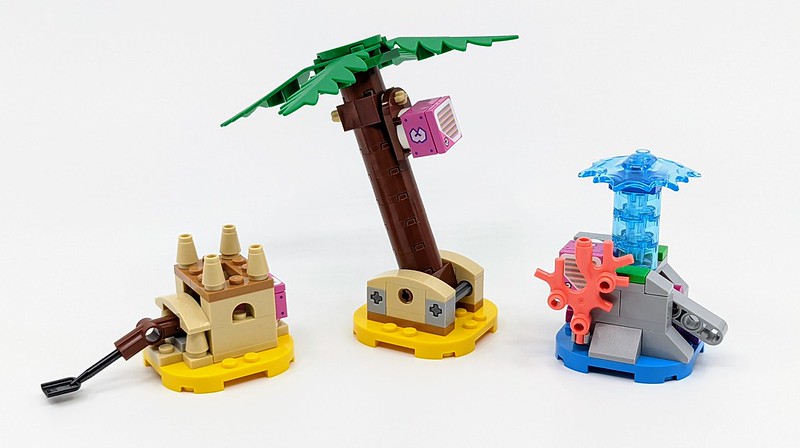 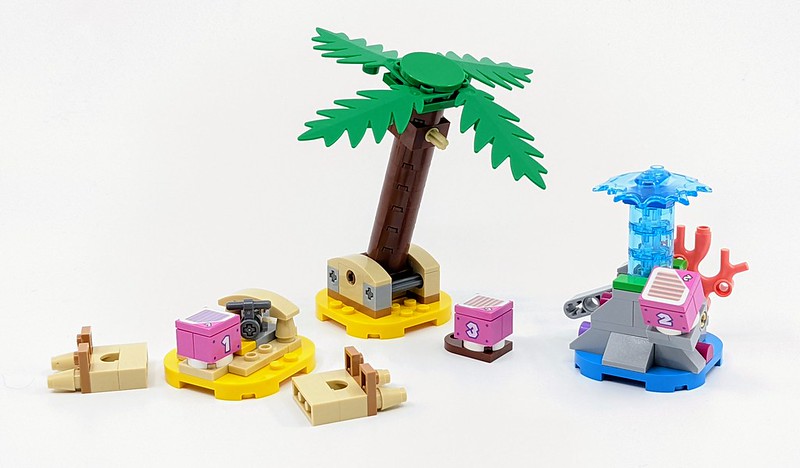 There’s another play feature, not directly linked to an Action Brick, which is a shell shot. This is a new play feature for the 2022 sets, as a similar function is found in one of the Luigi’s Mansion sets. It basically involves a shell and a hinged platform, stomping down on the platform shoots the shell. In this case, it’s at a Hackit crab. The enemy first appeared in the second series of Character Packs and this is the exact same build. There’s an Action Brick on its side, which will give you a coin when hit. 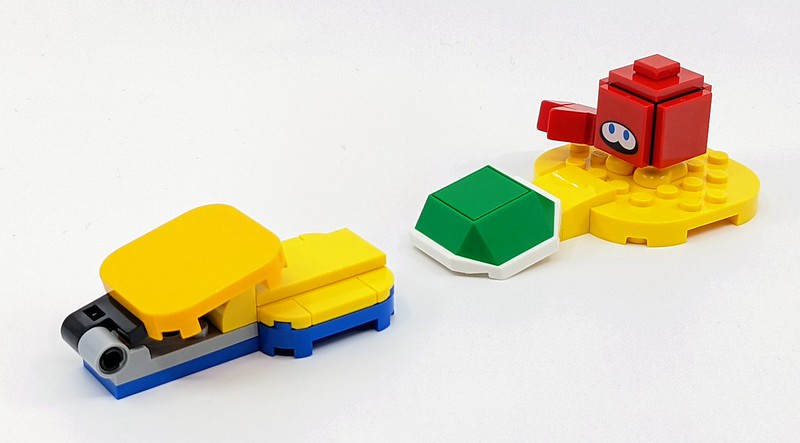 The rest of the expansion set features connection plates and a few other platforms including a sandy patch for Hackit to stand, a simple grassy mound and another water jet platform. Which makes great use of the water splash plate, previously featured in some of the 2021 Marvel sets. 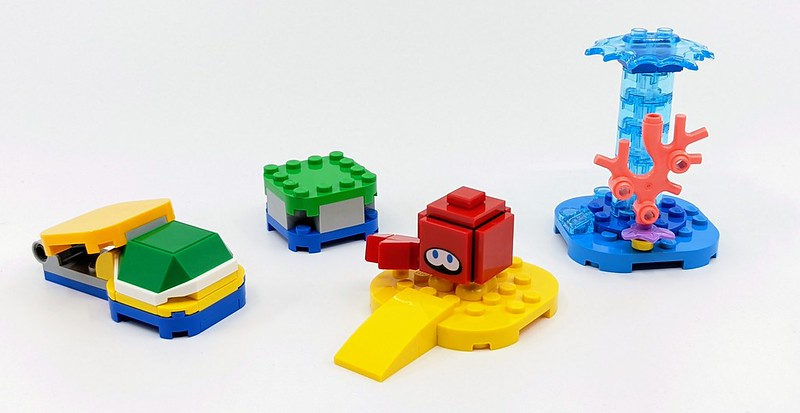