Whether he’s basking in Sunshine, blasting across the Galaxy or simply on an Odyssey, Mario has been delighting gamers for over 35 years. The iconic platforming plumber has even found time for a spot of tennis, the occasional kick-a-bout and plenty of high-speed racing. In recent times Mario has made the leap from pixel to brick in the LEGO Super Mario range of sets, which allow you to bring levels to life with a series of expansion sets. But one of the most memorable LEGO moments so far has been the incredible brick-built Nintendo Entertainment System, that is until now. Rumours of a second D2C set have been rife for a while now with many assuming it would be a microscale version of Princess Peach’s Royal Castle. But oh how wrong those rumours were. Although a microscale castle is featured in the new set, it’s actually housed with a giant ‘?’ block. But that’s not the only secrets to be found inside the iconic piece of Mario memorabilia. So let’s break this brick-built block open and see what’s inside in my review of the Super Mario 64 ‘?’ Block set. 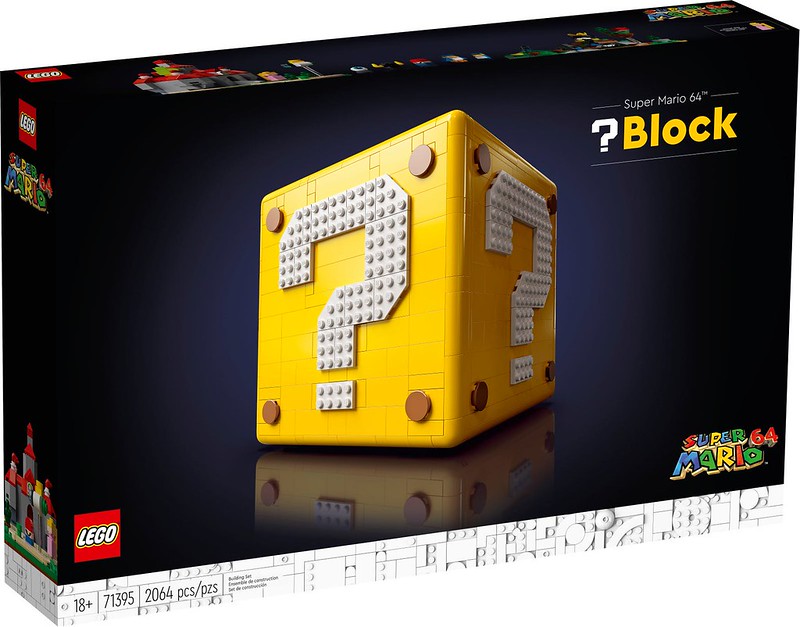 Rekindle fond memories as you build, display and play with the LEGO® Super Mario 64™ ? Block (71395). Twenty-five years on from the launch of the Super Mario 64 video game, this set features a brick-built ? Block that opens to reveal instantly recognizable levels from the game: Peach’s Castle, Bob-omb Battlefield, Cool, Cool Mountain and Lethal Lava Land. There are also 10 microfigures of iconic characters to place in the detailed scenes. 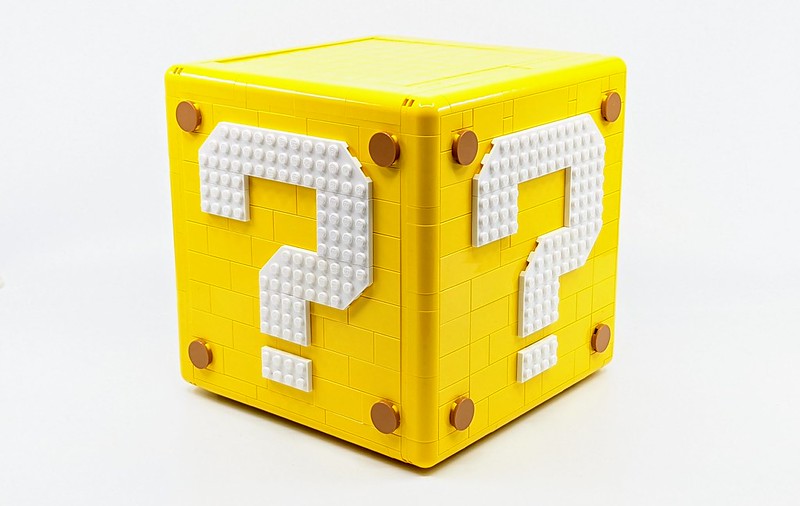 With all the rumours of Princess Peach’s Castle being the next D2C Nintendo, when I opened my package from Billund, I was super surprised. A large item box from the Mario games is as far from a castle as you can get. It’s also very different from the NES set from last year. As icons of the Mario series of games go, the ‘?’ Block appeared in pretty much every game. In fact, the goody-filled block debuted in the very first Super Mario Game. Like many aspects of the Mario games, its design has been iterated upon over the years. This LEGO version is more similar to the ‘?’ block design first found in Super Mario Galaxy. In an odd twist of fate, Super Mario 64 never actually featured ‘?’ blocks. 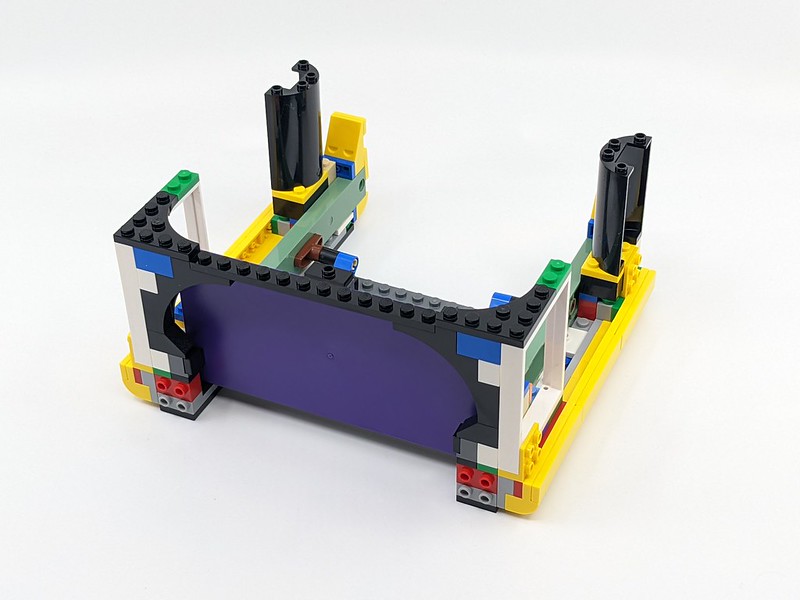 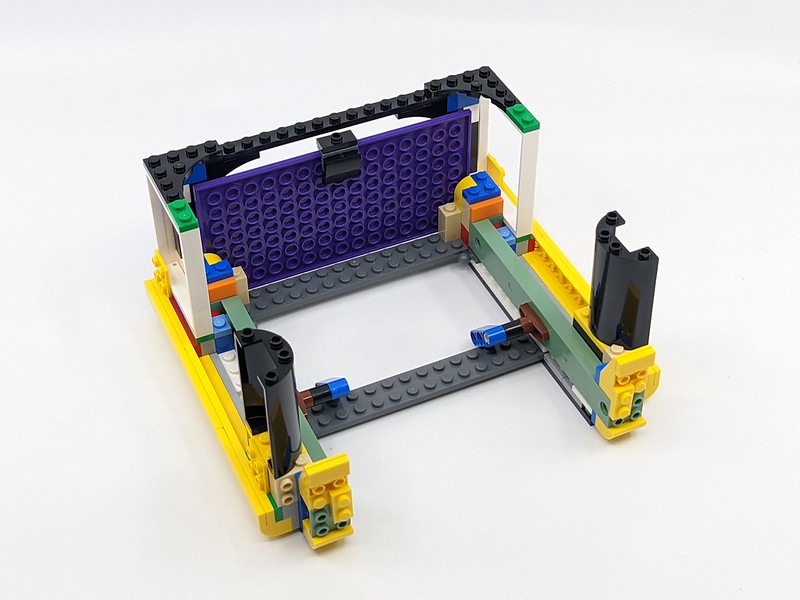 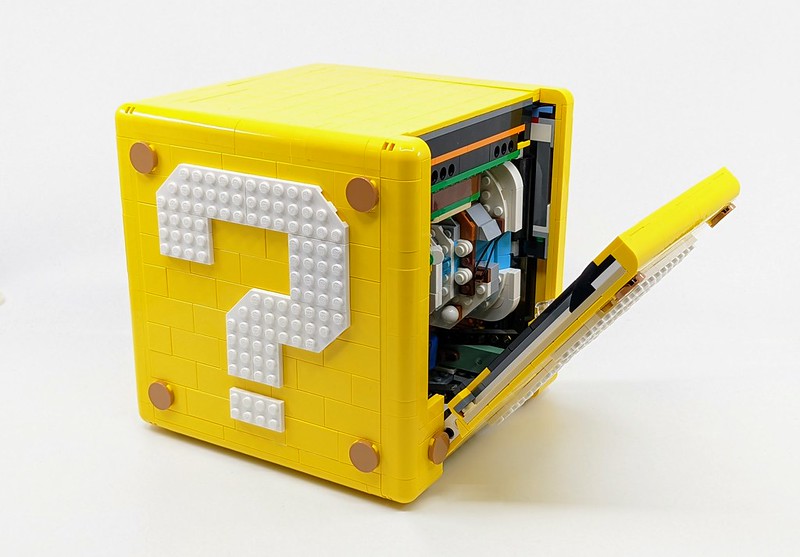 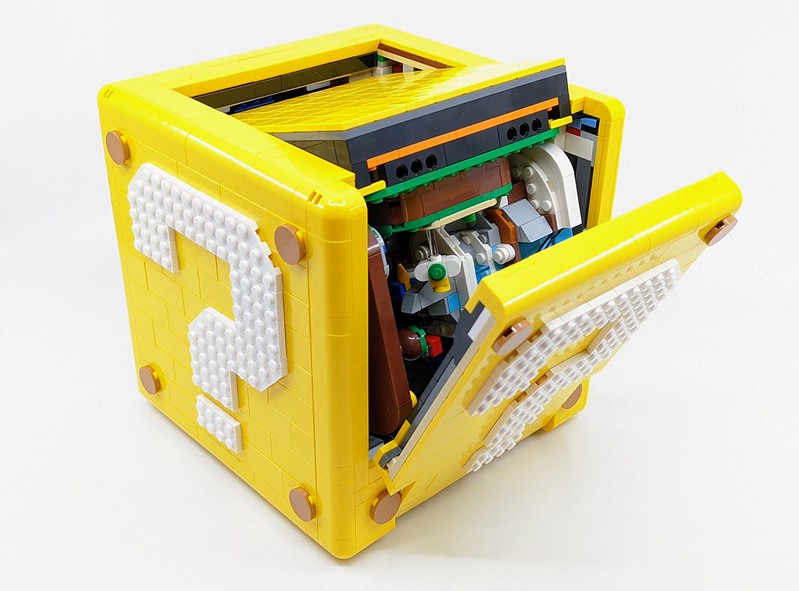 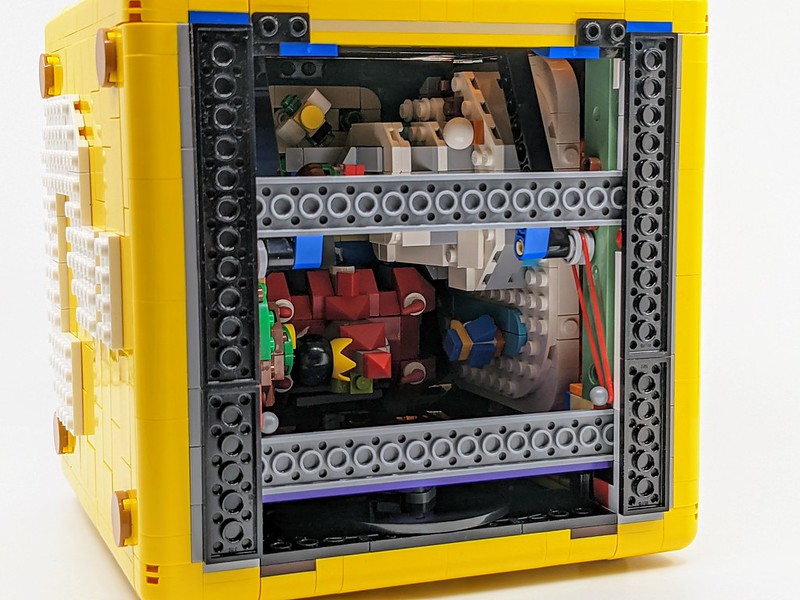 Just like the in-game ‘?’ blocks, this brick-built one also hides a couple of secrets. These are cleverly built into the cubes inner structure. At face value, the build may seem quite simplistic, after all, it’s a cube, a shape that lends itself extremely well to LEGO elements. But it’s far more complex than that. The frame of the set relies on various Technic elements to create a foundation around which the ‘?’ blocks familiar facade is built, but it must also hold various moving parts. The first of which hasn’t been shown in the press or product images. To access the secret compartment, you need to slide up a small section of the cube to reveal King Koopa lurking within. The mini Bowser build is guarding a small platform, which can be pressed down to pop open a larger flap below. This represents the boss arenas from Mario 64, where Mario faces off against Bowser and flings him into bombs. This action is replicated by a rotating platform, hook on Bowser and spin him around. It’s not a detailed section, but a nice touch to the overall build. 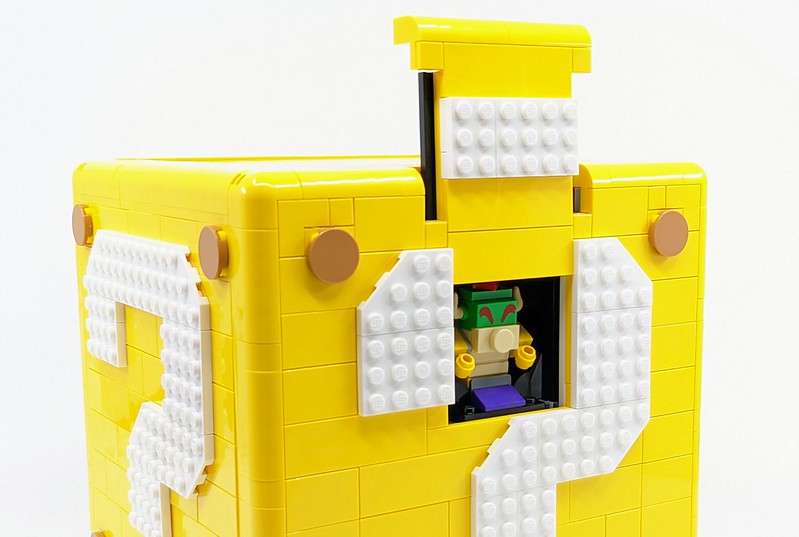 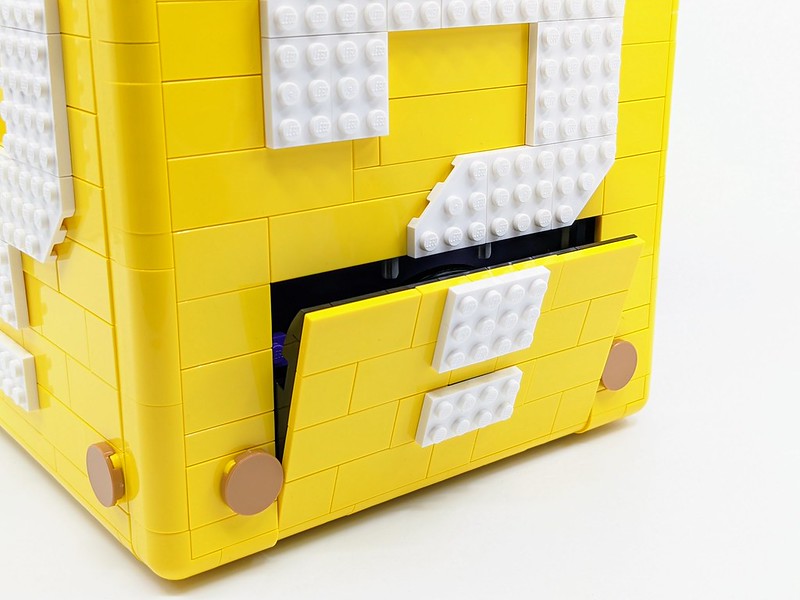 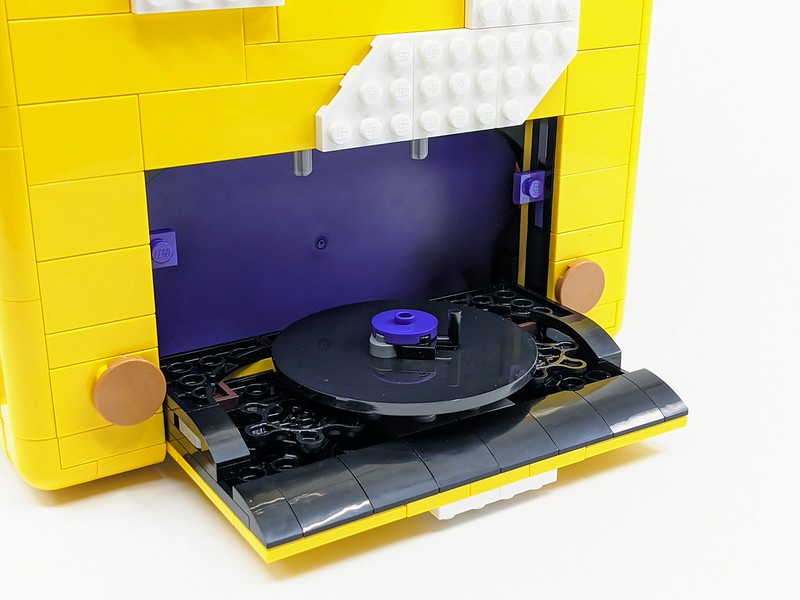 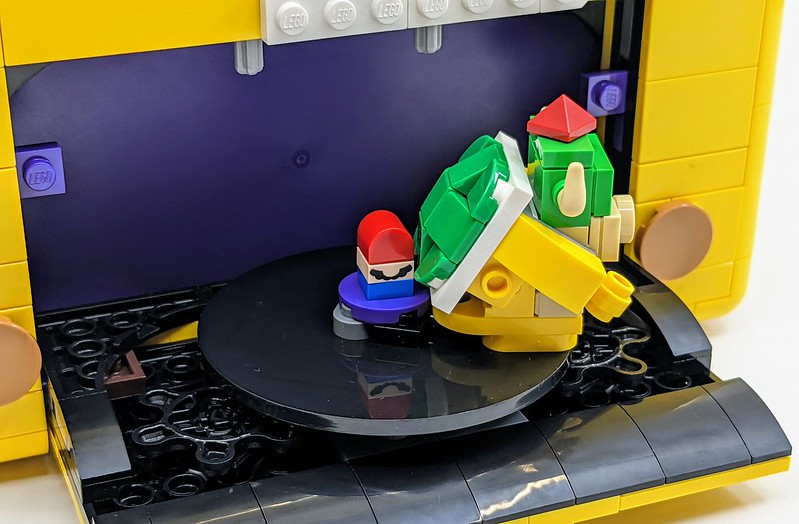 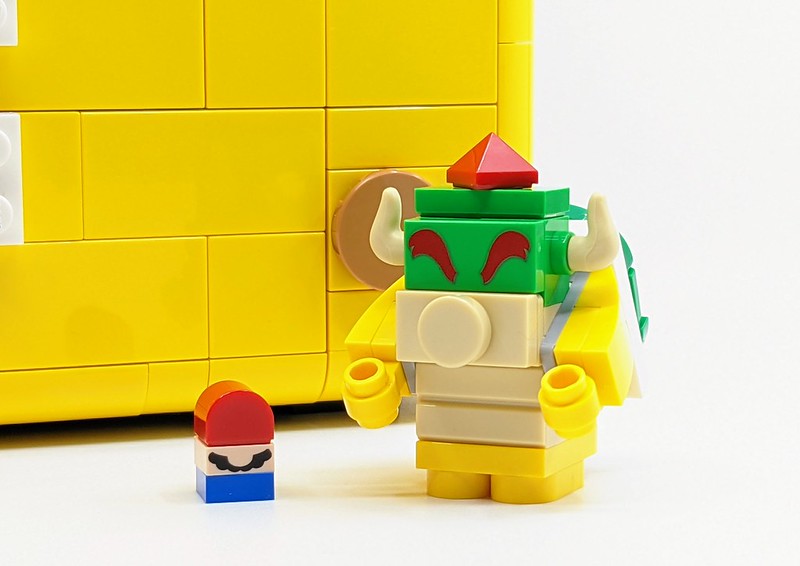 Bowser isn’t the only microscale character to be included in the set. Mario, Peach, Yoshi and Lakitu are all featured in the set along with a number of other characters and creatures from various worlds. These include King Bob-omb, a Chain Chomp, the Penguins and even the all-seeing Mr. I. Some of the details are achieved with printing, something which also extends to a few of the sets other details. The three-level world’s built into the sets are shown on printed paintings inside the castle and there’s even a 2×2 plate replicating the slide puzzle platform from Lethal Lava Land. 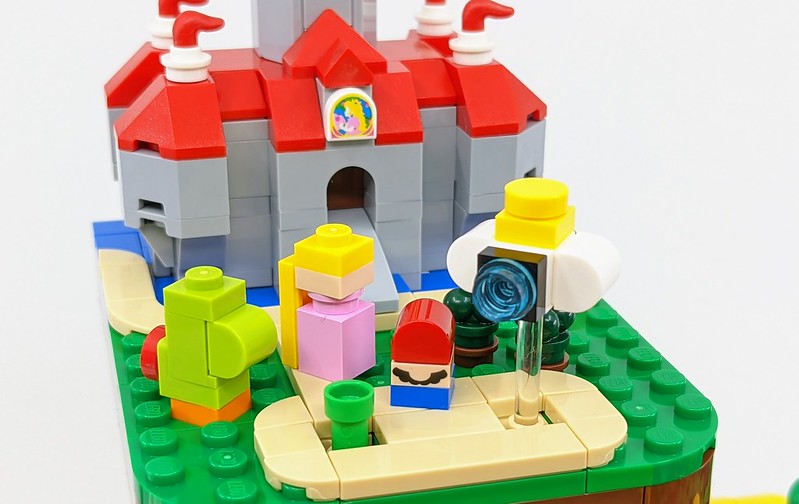 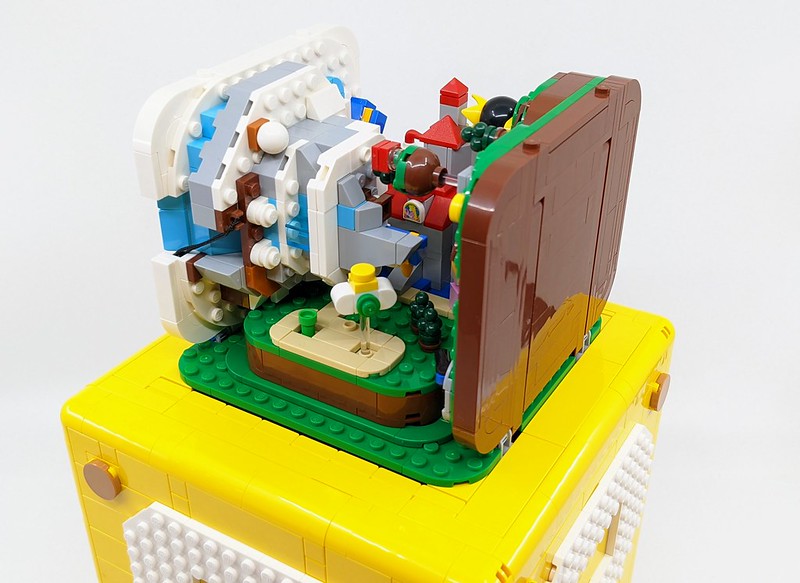 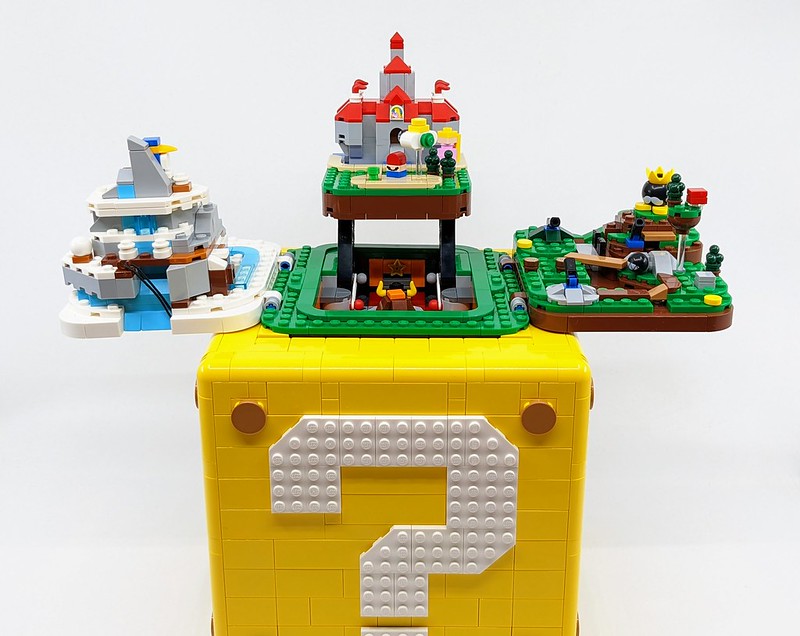 These fun nods to Super Mario 64 are scattered throughout the four microscale representations of the Mushroom Kingdom. The mini lands are all built upon separate sections which dwell within the block. To access them, one side of the block can be opened in a similar fashion to an oven or dishwasher door. The entire top of the block then rotates from within to reveal a section of four platforms. Each one is themed around different worlds including the Castle Grounds, Cool, Cool Mountain, Lethal Lava Land and Bob-omb Battlefield. Although they aren’t 1:1 recreations of the worlds, they each feature plenty of recognisable aspects of them, to instantly tell what they are. 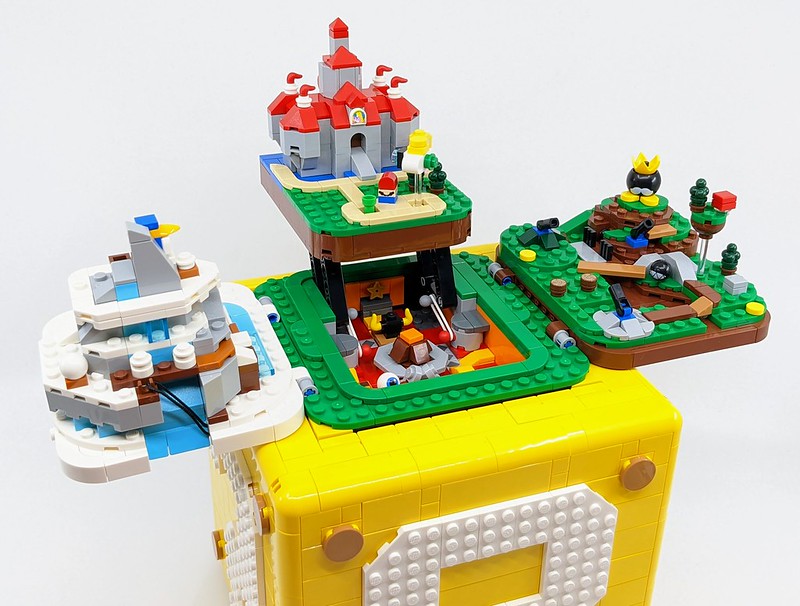 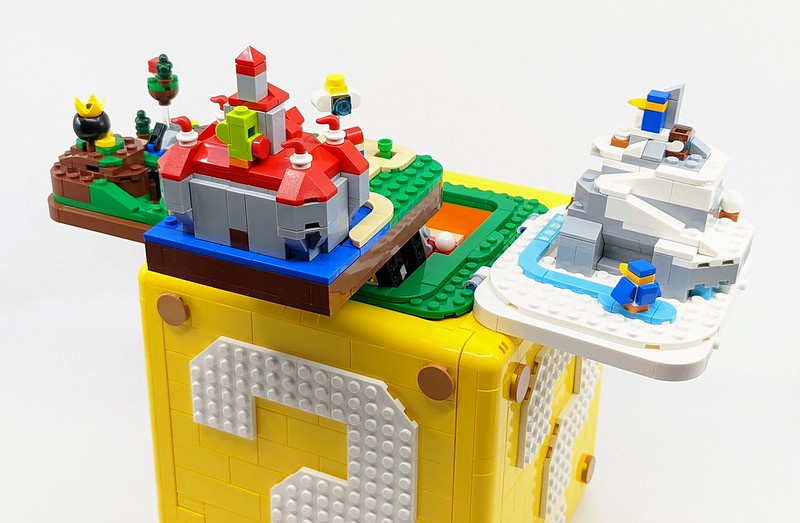 Probably one of the most recognizable locations in video games. As Mario moved from 2D to 3D, Nintendo showcased these leaps in graphics by flying players around the castle and its grounds. This area of the game is built upon the central platform, which is mounted on a couple of Technic beam hinges. The famous green warp pipe has been cleverly included with green-coloured scope element, surrounded by trees using recoloured elements mainly used for ice cream or popcorn. But the focus of this section of the set is Peach’s Castle. So technically all these rumours were kind of true. The castle is built in two sections. One of which can be removed to access the interior. Inside you’ll find picture frame portals to other worlds as a 2×2 round tile, which is actually an Action Brick, but more on that later. 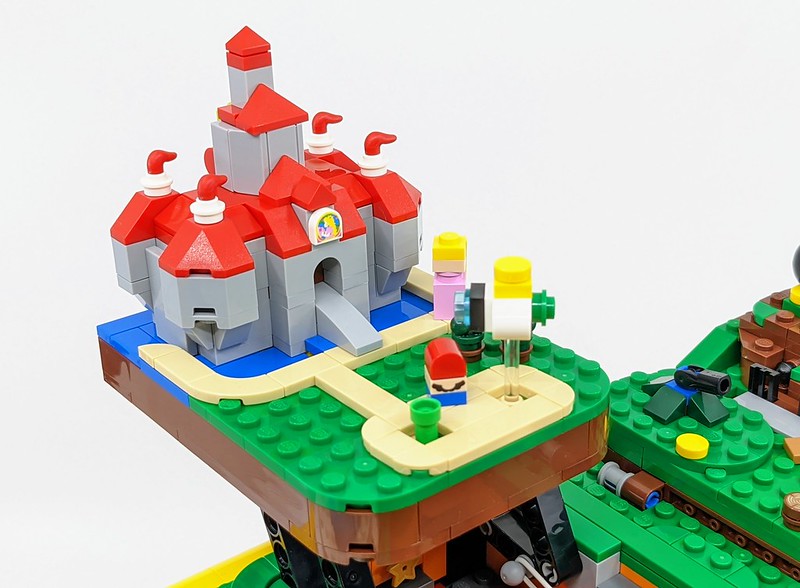 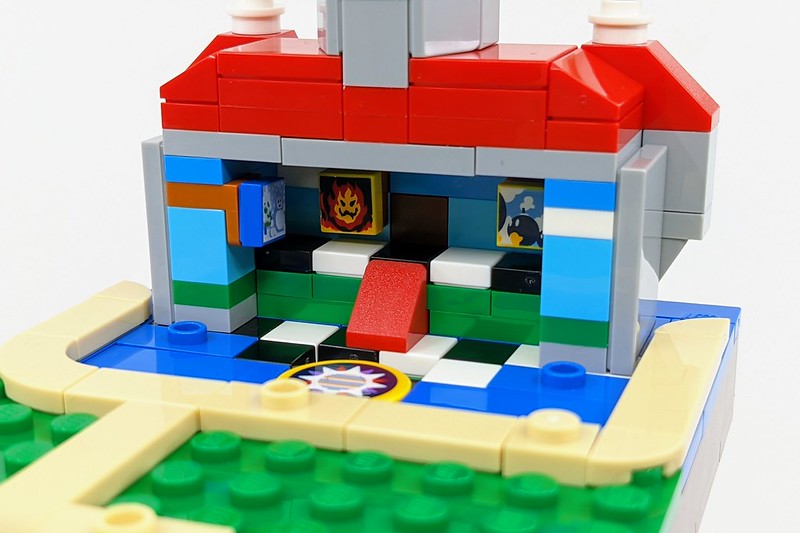 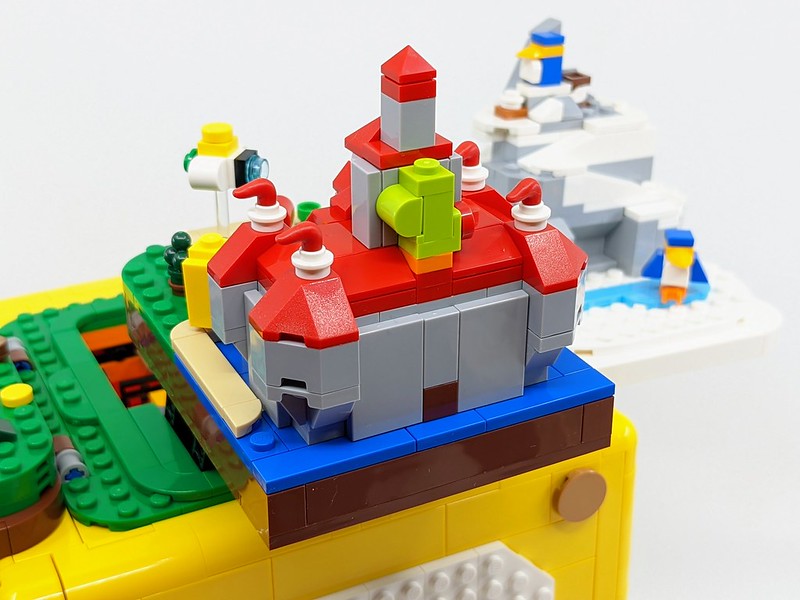 Your journey to the Mushroom Kingdom and your quest to save the Princess begins on Bob-omb Battlefield. This world is built on to the right-hand side flap. There’s some great use of parts here. Both King Bob-omb and the Chain Chomp use different sized ball elements. ‘Shaft with hole’ elements represents a couple of canons. The floating platform where the red block is hidden has also been included. 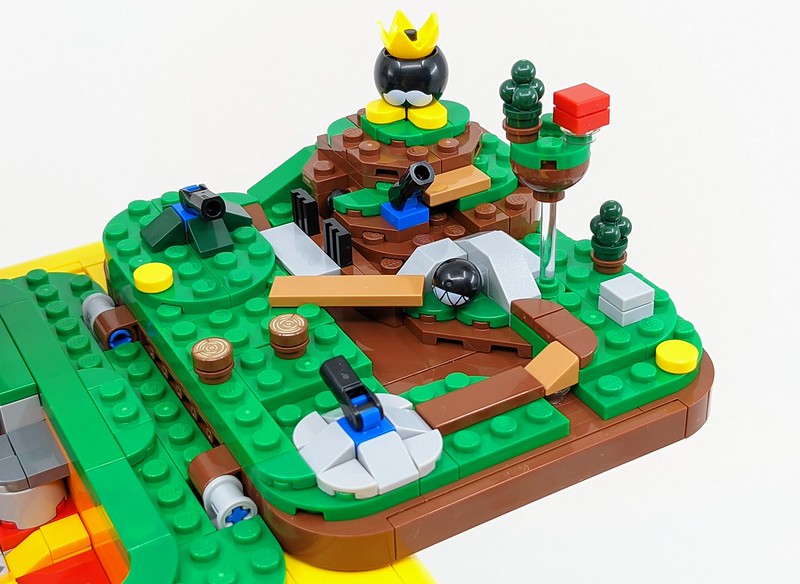 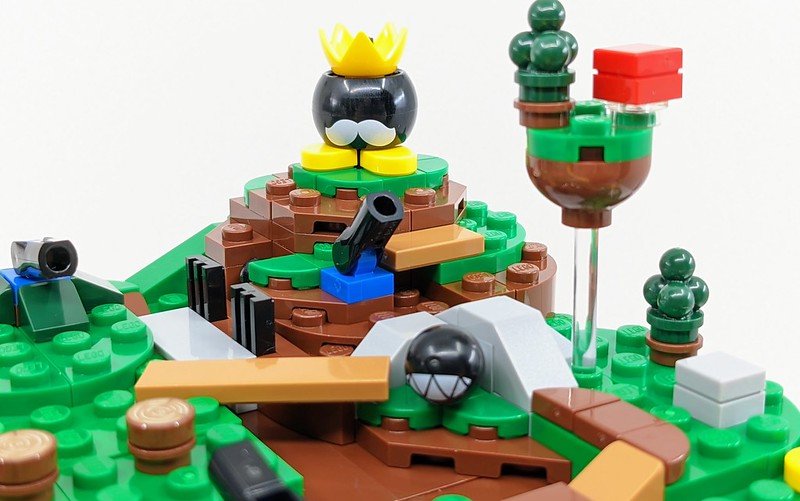 The snowy summit of Cool, Cool Mountain can be found on the left-hand side platform and features two penguins mini builds. Thankfully neither of them require you to beat them in a race or fling them off the side of the snowy mountain. Although a lot less detailed compared to other areas, it does have a great array of part usage. 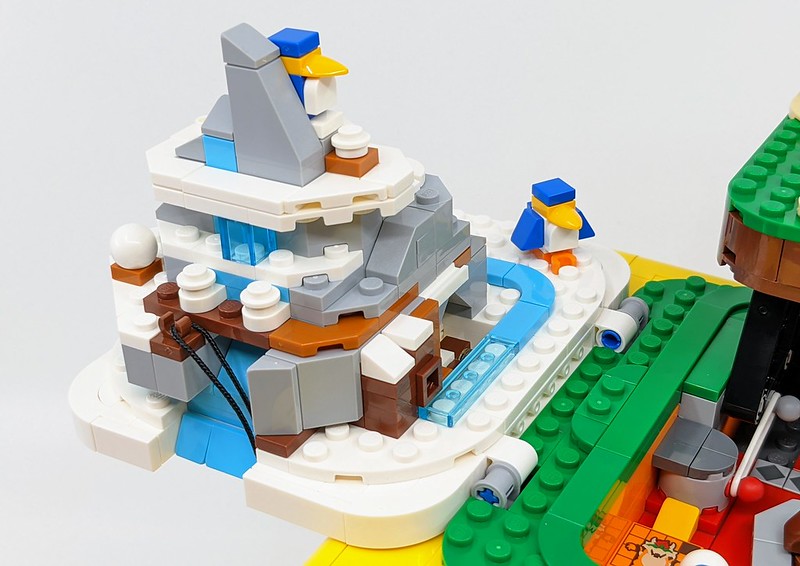 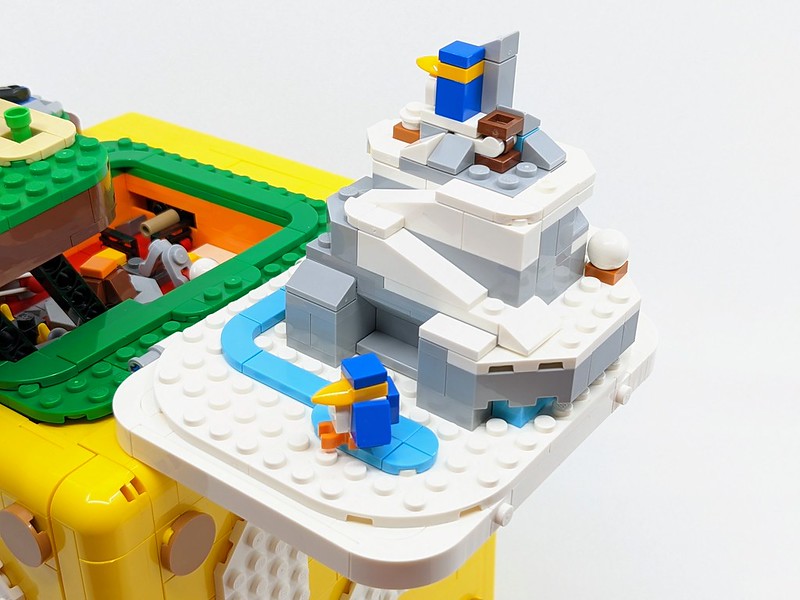 Below the Castle Grounds platform are the fiery depths of Lethal Lava Land. Although this has a little less room to play with due to the hinges connecting the above platform, it’s packed with detail. Printed tiles recreate the floating walkways resting in the lava, the spinning eye is keeping watch and there’s even a gold star waiting to be collected, but guarded by Big Bully. All centred around a tiny volcano. 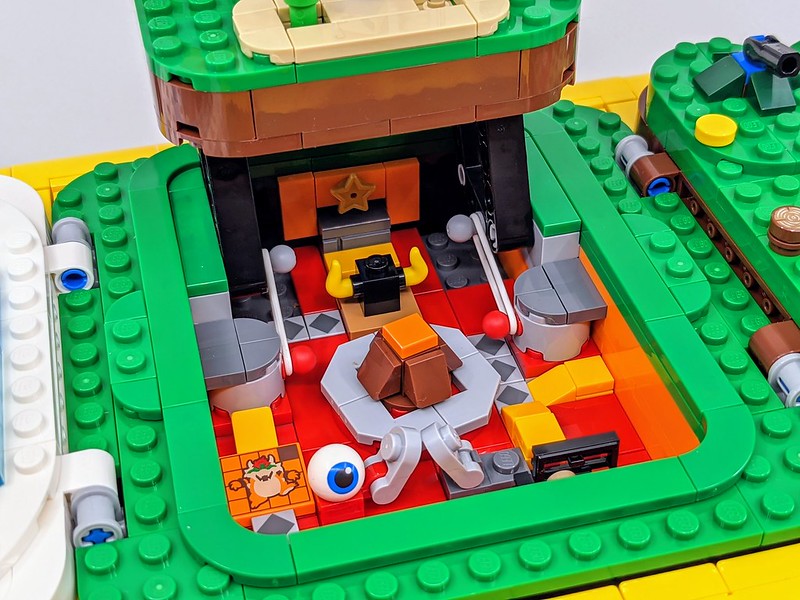 There’s also a connection to the overall LEGO Super Mario range, with a lone Action Brick located within Peach’s Castle. Once scanned, this activates a short minigame where you need to find a collection of hidden coins dotted across the microscale worlds.  The mechanism which reveals the microscale worlds from within the block is surprisingly simple, yet complex at the same time. The innards are largely used as a canvas to add the outer cladding. The actual parts which allow the top to twist are minimal. But it’s been cleverly achieved and is quite sturdy, I wouldn’t advise headbutting it but you can be quite heavy-handed. I know there are many disappointed that the set isn’t a large-scale castle, which is one of the problems with leaks and rumours. There’s also a big backlash in regards to the lack of Minifigures, which really wouldn’t have been a sensible fit for this particular set, plus people forget there’s a Super Mario animated film coming from Universal very soon. Admittedly, it’s not as impactful as the NES set is but it’s still an impressive set and a great celebration of both Mario and LEGO construction.

This set was provided to BricksFanz.com by The LEGO Group for purposes of review. The thoughts within this review are that of BricksFanz.com and do not reflect those of the LEGO Group or Nintendo. Providing the set for free does not guarantee a favourable opinion of the set.