The Mushroom Kingdom is filled with all sorts of incidental characters. As Mario heads off on new adventures, new enemies appear to cause all manner of trouble. The various LEGO® Super Mario Expansion Packs feature some of these foes with some of the lesser-known ones captured in LEGO form in the Character Pack series. Similar to LEGO Minifigures, these blind bagged mini sets feature one of ten different collectible characters from a range of different Super Mario games. But who appears in the third series of characters? Here’s my review of the recently released third series of LEGO Super Mario Character Packs.

LEGO® Super Mario™ fans can create even more action-packed levels with collectible toy Character Packs – Series 3 (71394). Each pack contains a mystery, buildable character with an Action Tag, plus a small build to use as a display stand or to enhance play. There are 10 LEGO Super Mario characters to collect: a Galoomba, Parachute Bob-omb, Boo, Crowber, Amp, Torpedo Ted, Bony Beetle, 1-Up Mushroom, Scuttlebug and a Swoop. Each is designed to be used with a Starter Course set (71360 or 71387), which is needed for interactive play. 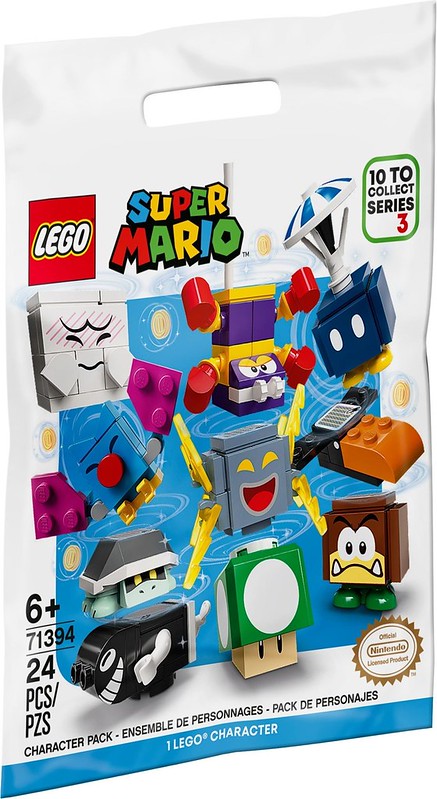 Although these Character Packs don’t feature any of the big guns, they are a great place to find some of the weird and wonderful bit players. Each of the characters is entirely brick-built and features printed elements, with not a sticker in sight. Each character also features the pre-applied Action Brick tags, these provide coins or power-ups when scanned by both LEGO Mario and LEGO Luigi. They also include a themed display base, which shows off the various characters in a cool way and allows them to be easily incorporated alongside other LEGO Super Mario Expansion Sets. 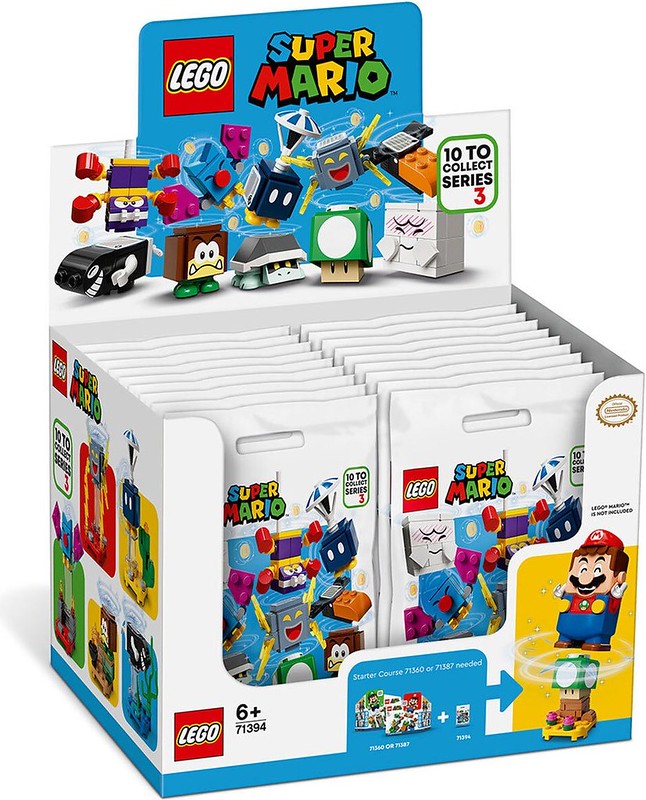 These display bases use a unique island plate and are themed to different biomes, found across the LEGO Mario sets and also recognised by the LEGO Mario and Luigi figures. So there you’ll get yellow for desert, blues for water plus the sky, red for lava, green for grassy areas, purple for poisonous swamps and a new light brown plate, which seems to represent an interior area. Most of the characters are unique to the Character Packs, although a couple of them are slight variants on those which have appeared in other LEGO Super Mario sets. 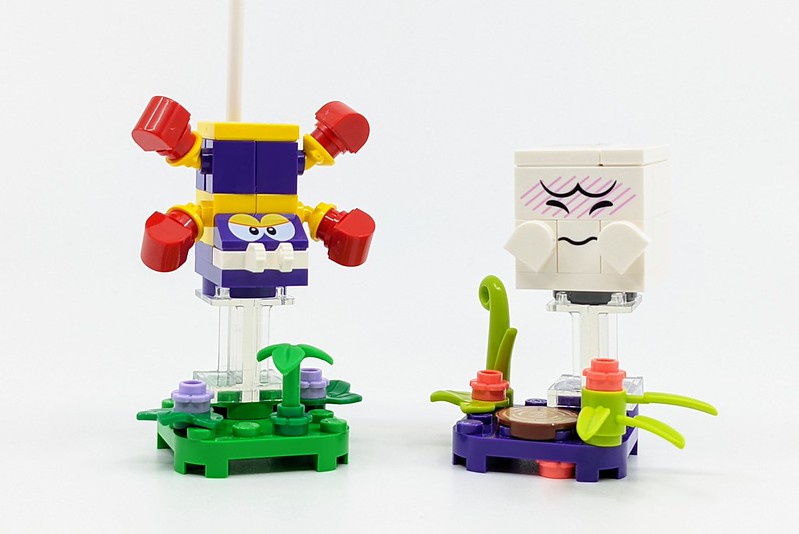 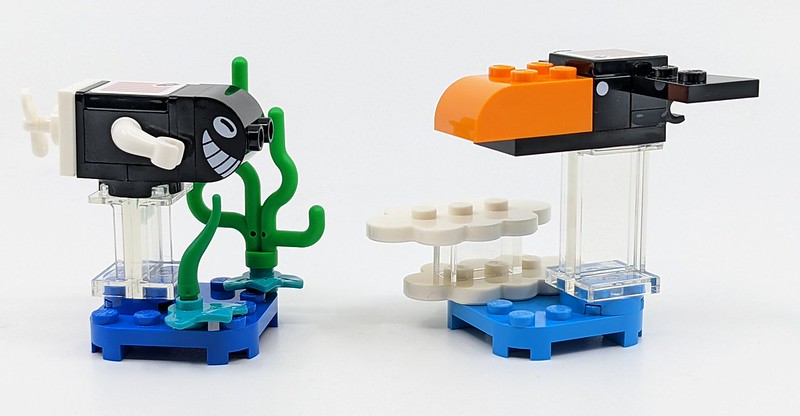 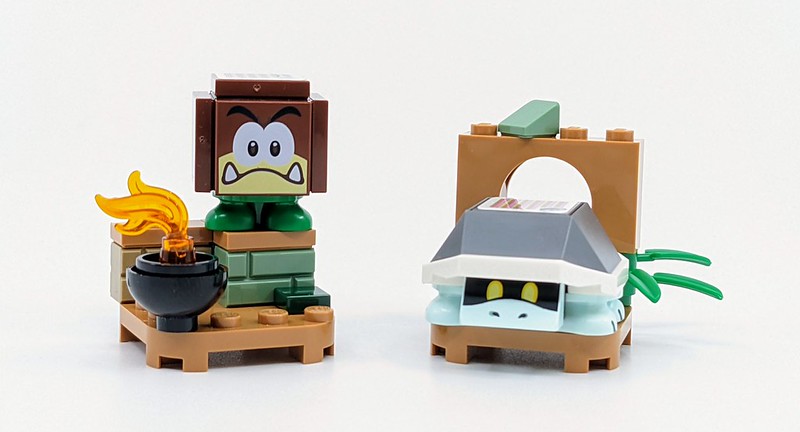 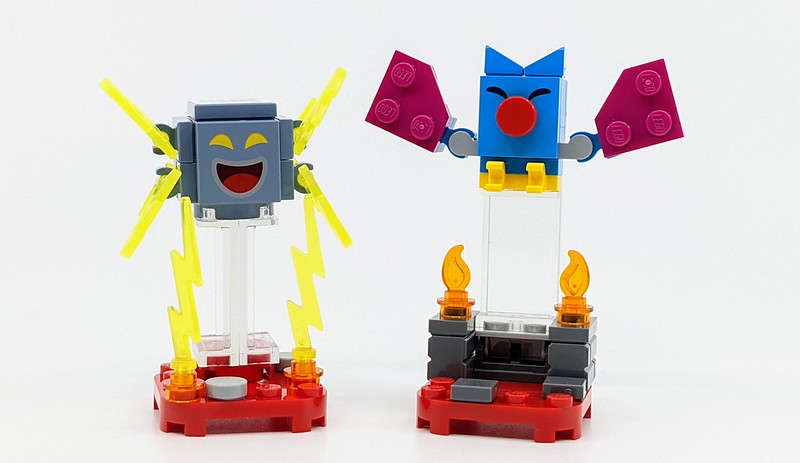 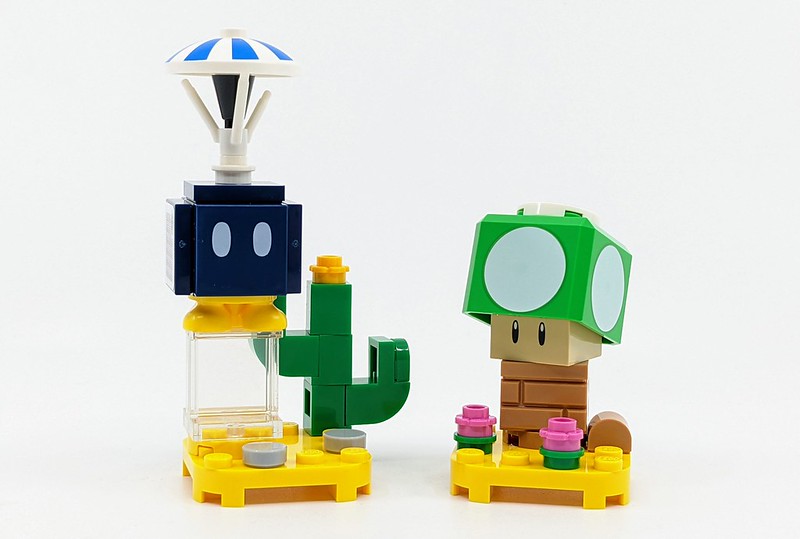 The Galoomba is a mushroom-like creature but has much more. compact appearance compared to a Goomba. This version is built similarly to Goomba, but lacks curved sides instead featuring flat tiles on all sides. Its display plate features a new masonry surface. It requires a couple of ‘hits’ before you can earn any coins from it. First appeared in Super Mario World 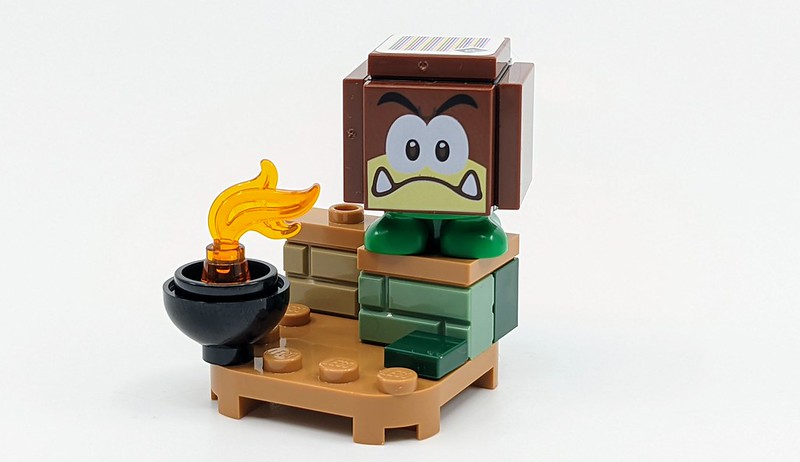 Bob-omb’s are a classic Mario foe and over the years they have appeared in a couple of different forms. One such variant is a parachuting Bob-omb. This uses the same parasol element and white flower stems as the Paragoomba from Series 2 to create a small parachute. The actual Bob-omb character is built exactly the same as others. Its display plate is desert-themed with the Bob-omb mounted on a clear stand to give the appearance of floating to the ground. First appeared in Super Mario World 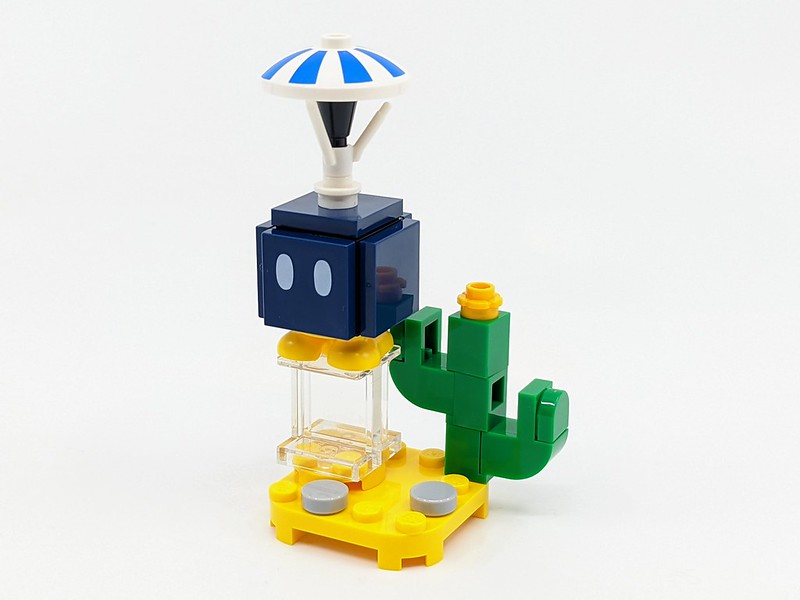 Boos have appeared in a couple of the LEGO Super Mario expansion sets but this is the first time it’s appeared in the Character Packs. These ghostly foes have been highly stylised for their LEGO form, as they are cubed instead of their common sphere shape. Despite that, this is one of my favourite characters in this series. It has a shy expression, which is combined with half-circle flat tiles for its hands. It’s set in the poison swamp for its display plate. First appeared in Super Mario Bros 3 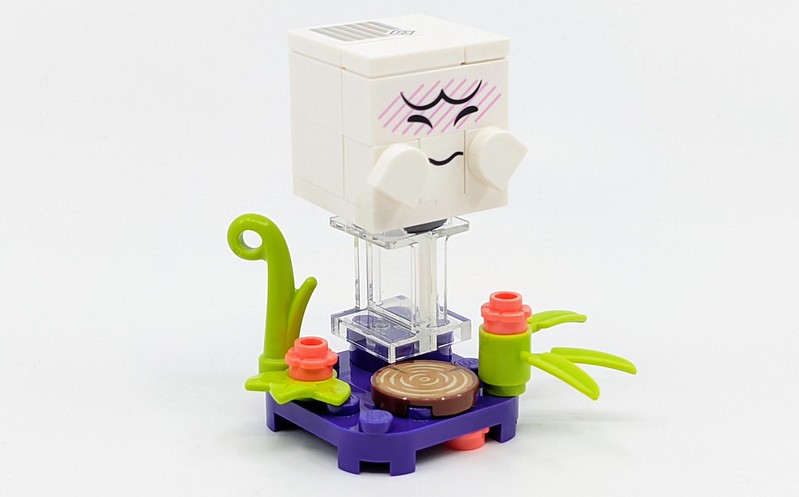 The Crowber is a fairly modern addition to the Mario universe. In the games, they swoop and chase after Mario, with flocks of them appearing more frequently as you progress through a level. It’s the first of the buildable characters to appear on a sky-themed display plate. First appeared in New Super Mario Bros 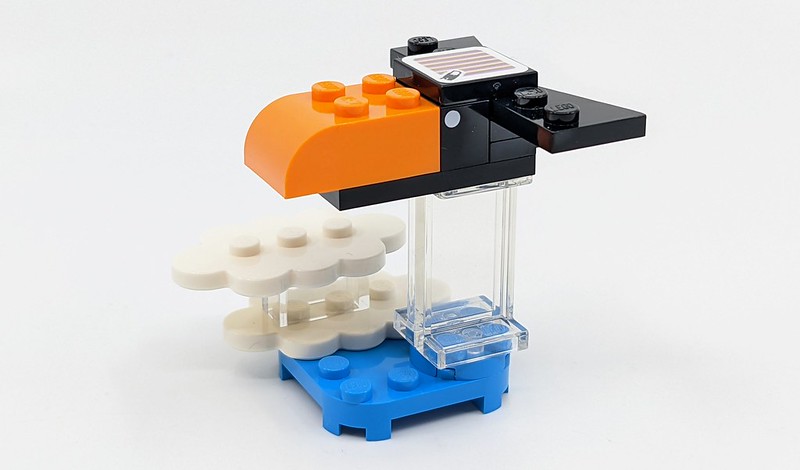 Another great series 3 character is Amp. These enemies haven’t appeared in many games but were first featured in Mario’s iconic Nintendo 64 outing. In a similar fashion to Boo, they have had to become a little cubic in LEGO form, but it looks really cool thanks to the yellow sparks. It’s nestled amongst a lava pool for its display plate. First appeared in Super Mario 64 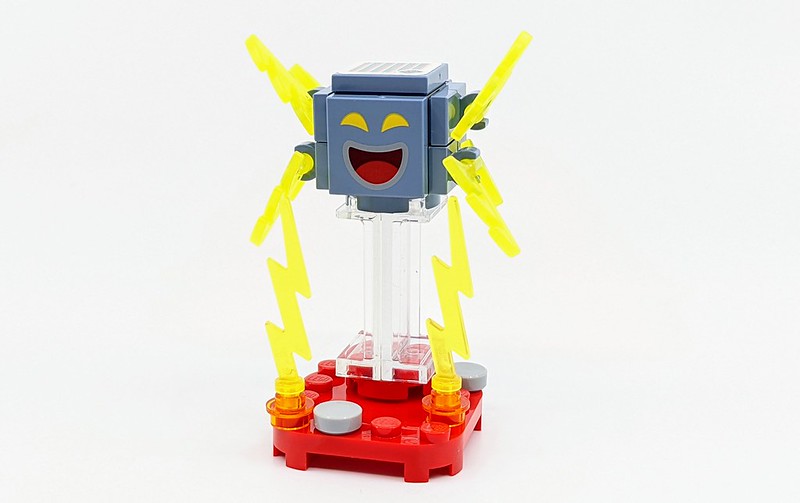 They may look like Bullet Bills but Torpedo Teds are their water-based counterparts. However, they attack in a similar fashion. Ted can propel through the water to follow Mario. The LEGO version looks extremely similar to previous versions with the darker blue display plate and small propeller element being the only thing to set it apart from other bullet-based baddies. First appeared in Super Mario World 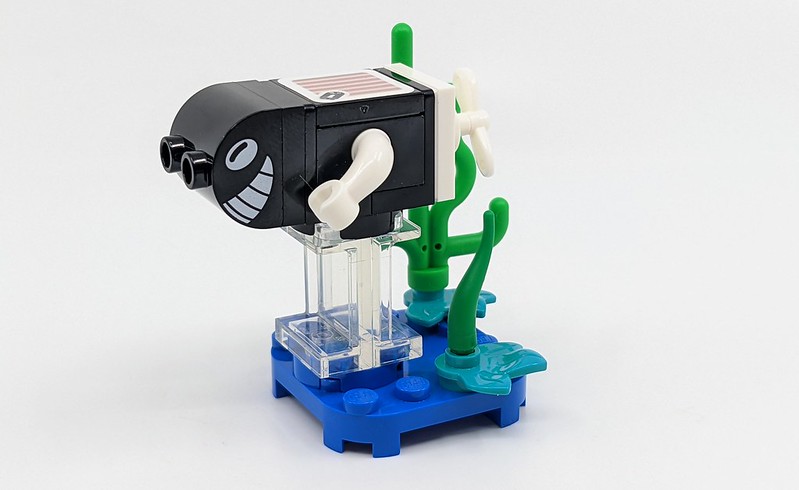 In the Mushroom Kingdom,.being stomped on Mario doesn’t mean the end of your service to King Koopa. Bowser’s baddies can be resurrected in new forms, which is the case for the Bony Beetle. It’s basically an undead version of a Buzzy Beetle. The LEGO version uses a grey-coloured shell element and its pale skin is a little bit of a departure to the source material, which is being a light blue instead of grey or white. It’s another character to be featured on a new for series 3 masonry inspired displayed plate. First appeared in Super Mario World 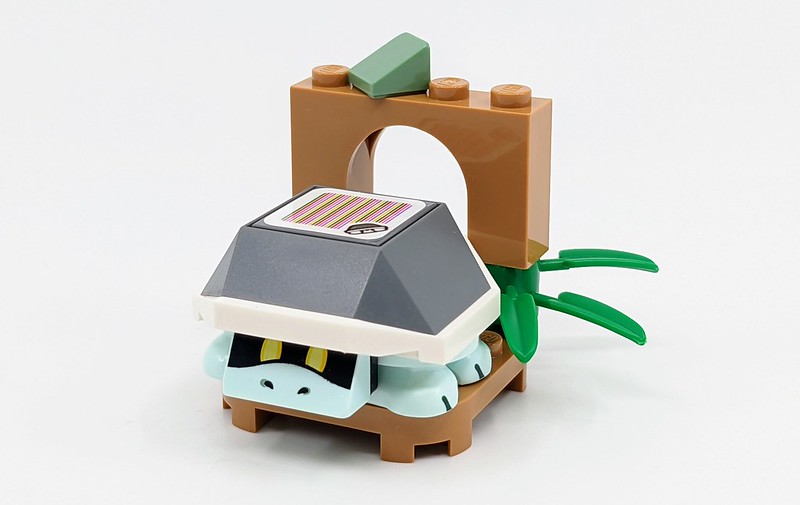 Surprisingly this is the first appearance of a physical 1-up shroom in the LEGO Super Mario sets. It uses a unique element for the mushroom’s cap, featured in green to match the Power-Up. Once scanned by LEGO Mario or Luigi, it gives you a buffer from an enemy. So if you have a 1-up logged you’ll lose it if hit instead of taking damage. It appeared on a desert-like display plate. First Appeared in Super Mario Bros 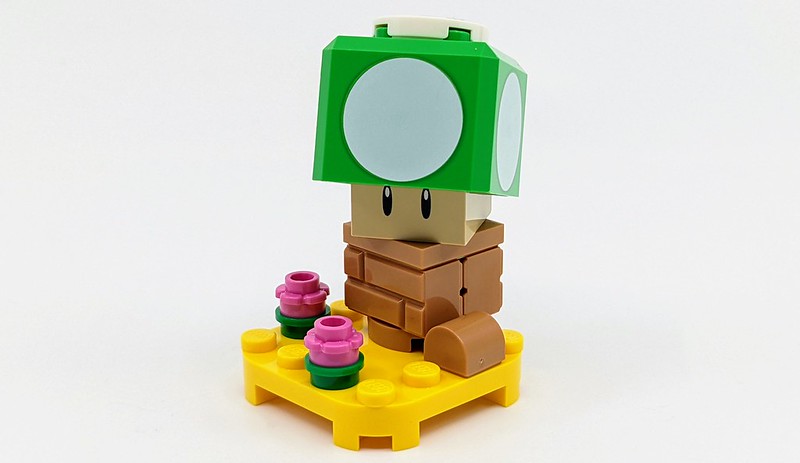 This is my favourite of all the LEGO Super Mario buildable characters. It just looks great and offers something unique compared to some of the other variants. It’s one foe that has improved since originally appearing in Super Mario 64. The LEGO version takes its inspiration from the Scuttlebug’s later appearances in New Super Mario Bros and Mario titles which have followed it. It features quite a few parts, with the Minifigure display peg recoloured in yellow for the arms. It’s featured on the only grass-themed display plate. First appeared in Super Mario 64 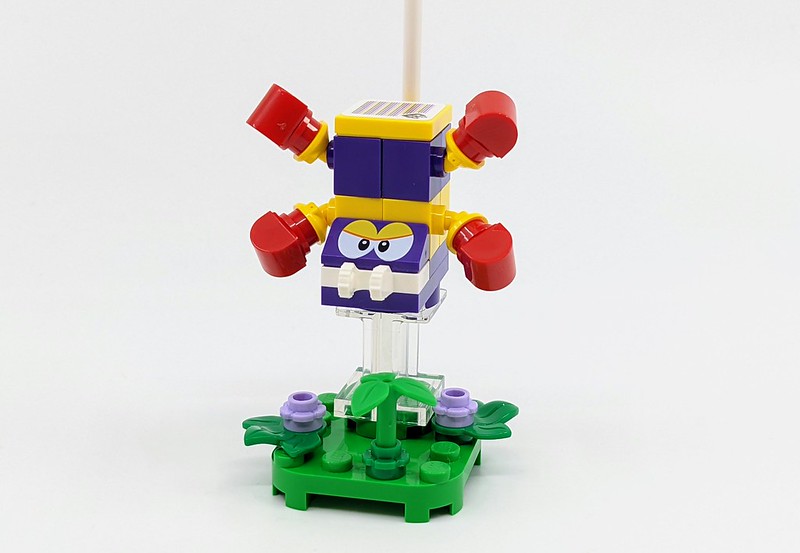 Swoops are bat-like creatures often found in caves or buildings. The spooky undertones saw them first appear in King Boo’s Haunted Yard. The build for both Swoops are exactly the same, the only difference is the fire-themed display plate. The Swoop is also mounted on a hinged section, allowing it to ‘swoop’ and reveal its Action Brick. First appeared in Super Mario World 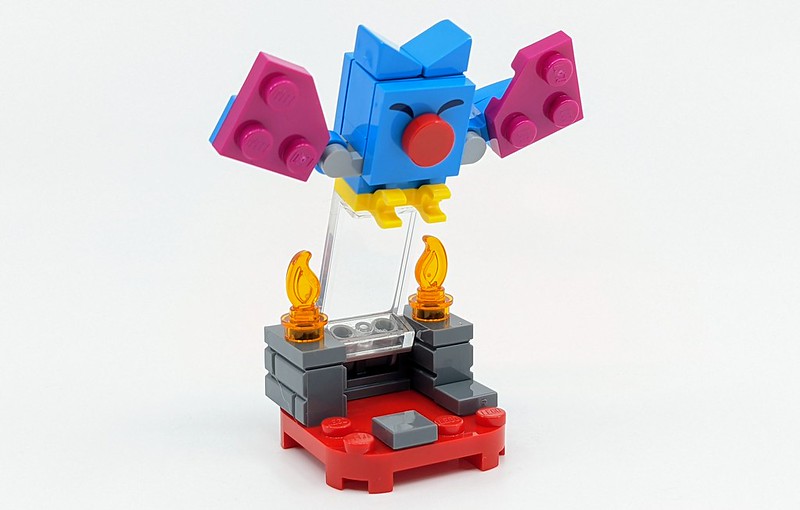 The Character Pack are great for Nintendo fans, who may not wish to collect the larger Expansion Packs. Although blind bags, it’s easy to tell who is inside due to all the different elements they contain. Each character can easily be integrated into your course builds or merely displayed as they are. The LEGO Super Mario Series 3 Character Packs are available now.