For every good guy, there is an equally bad one somewhere nearby. For as long as Mario has been jumping around the Mushroom Kingdom, Bowser hasn’t been far behind or should that be ahead. If there is one thing Nintendo does well it has a good old boss fight. Be it leaping over fireballs and taking him out on a bridge or swinging him around by his tail, Mario and Bowser have a long-standing grudge. Often fighting for the affections of Princess Peach. It’s no surprise that the largest set in the LEGO Super Mario range is inspired by the huge imposing structures, where Bowser and his Koopa Clan hole up. After all, an epic boss battle must take place in an epic location. A giant castle built in your own likeness is certainly that and is where you face off against LEGO Bowser. So is Bowser’s Castle an epic conclusion to your LEGO® Super Mario adventures or should you invest your money in another castle? Strap on those dungarees and get ready for my final LEGO Super Mario expansion set review. 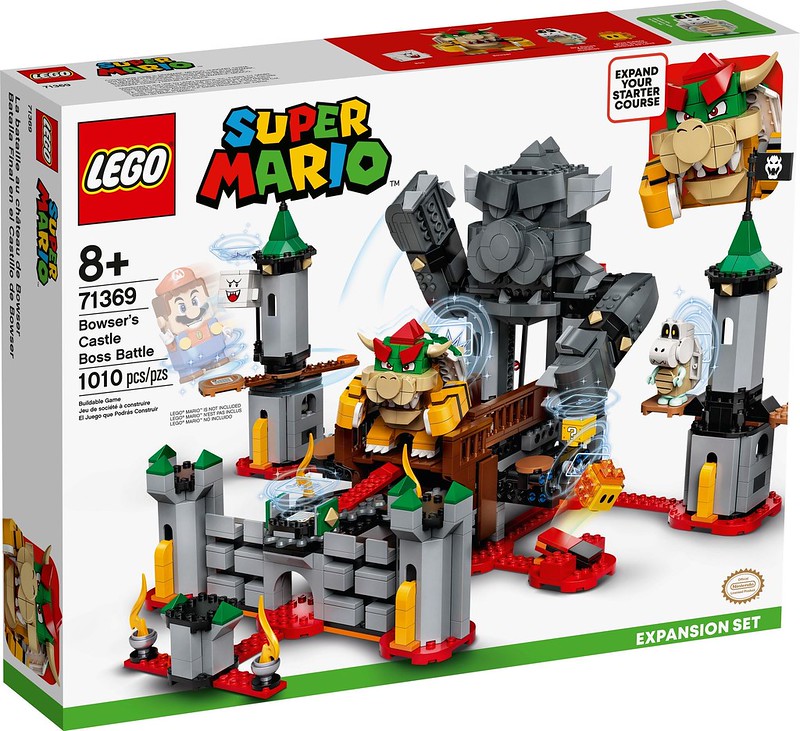 Players will love the flipping, shaking and balancing challenges in this Bowser’s Castle Boss Battle Expansion Set (71369). A brilliant gift for kids to add to the LEGO® Super Mario™ Starter Course (71360), this castle toy playset features towers with rotating and shaking platforms, flippers to raise Bowser’s arms and access the ? Block and Time Block, a shaking bridge, plus Bowser, Boo, Dry Bones and Lava Bubble figures. 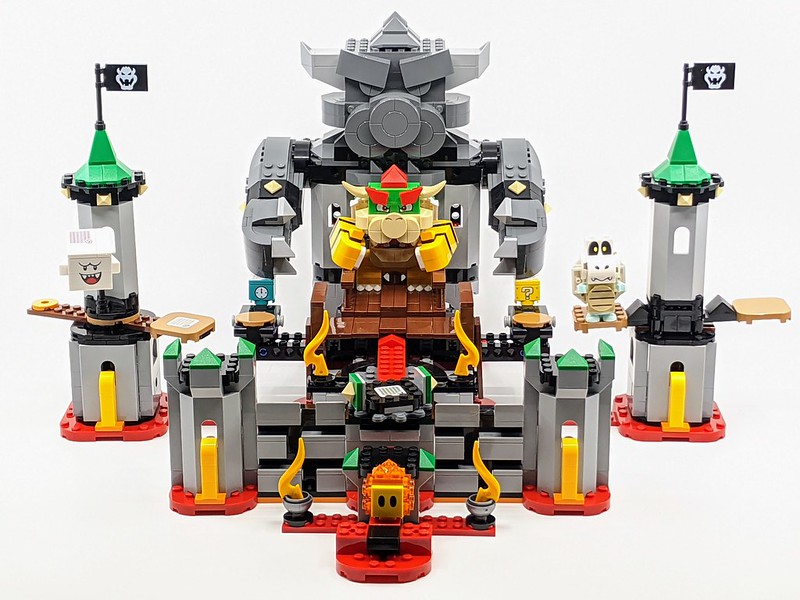 As castles go, one which is modelled after Bowser’s ugly mug is certainly one way to draw attention. Not only is Bowser’s LEGO castle rather impressive looking, but it also does a pretty decent job of mimicking the actions of the game. The main section of the castle features a classic bridge leading to a huge stone recreation of King Koopa. This features connected hidden elements to create the play features. 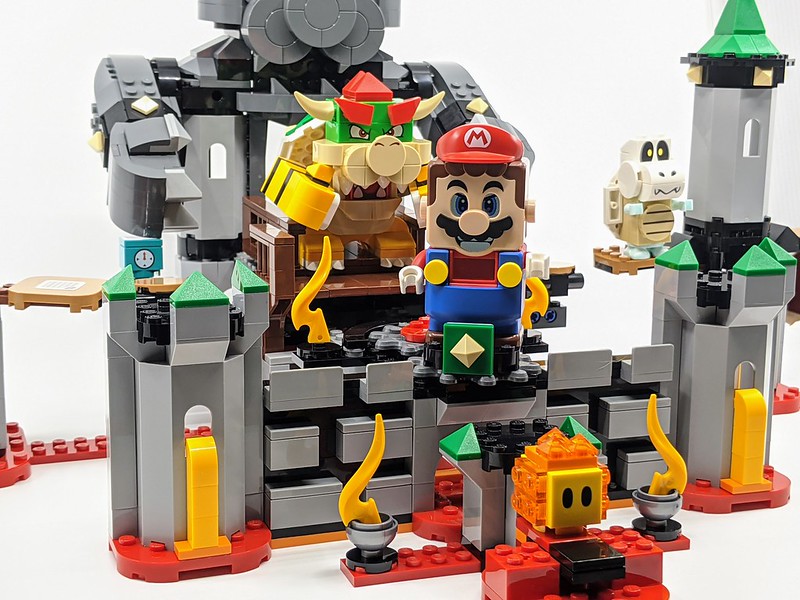 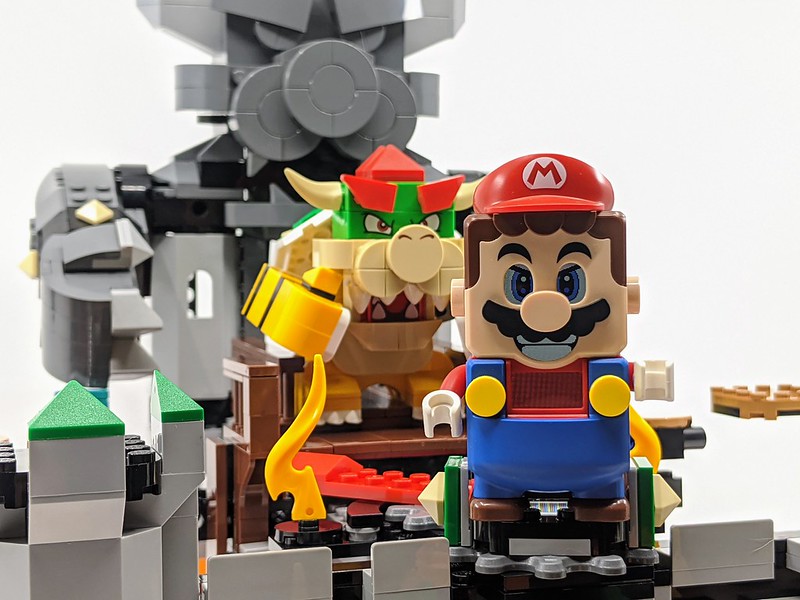 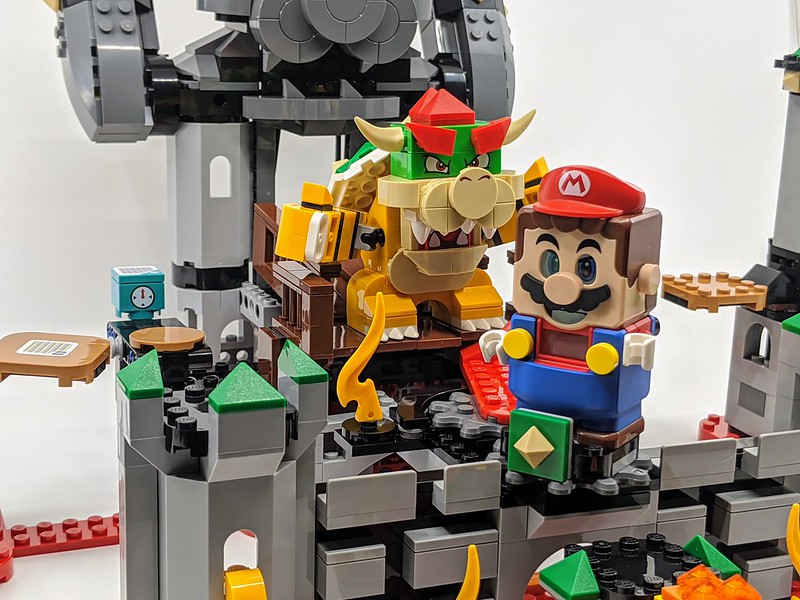 You’ll find a central platform on top of a splat gear which interacts with another gear featuring plate arm. This reaches towards a set of hinged tiles, which are best described as piano keys. These come into play as you face-off against Bowser. But before LEGO Mario takes on his old chum, you’ll need to coax the big brute from his perch – by force. And by force I really mean it. To get Bowser within shell-kicking distance, you’ll need to tip the bridge forward. This is done by flinging back both of stone Bowser’s arms. There are two hit points which force the arms back. But you really need to hammer those hit points with enough force to get the arms to stay back. Once you do, not only does Bowser step onto that piano key platform, you also reveal a Timer Block and ‘?’ Block. 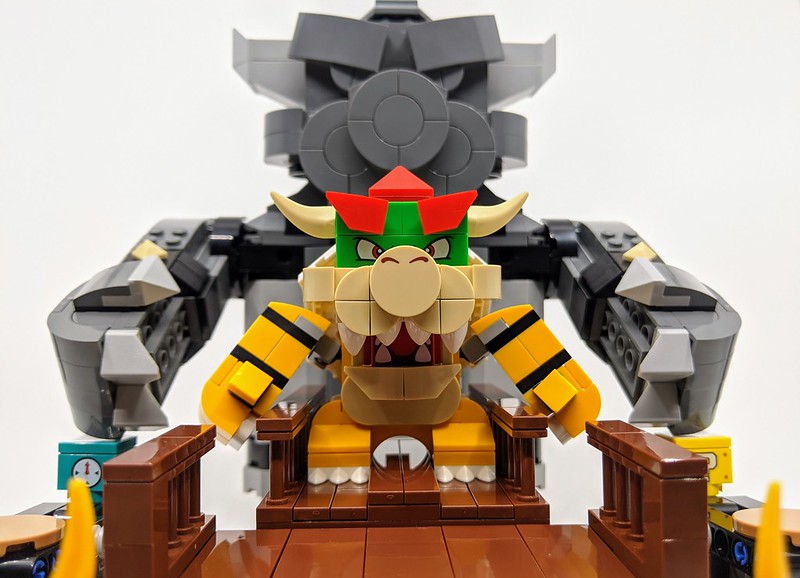 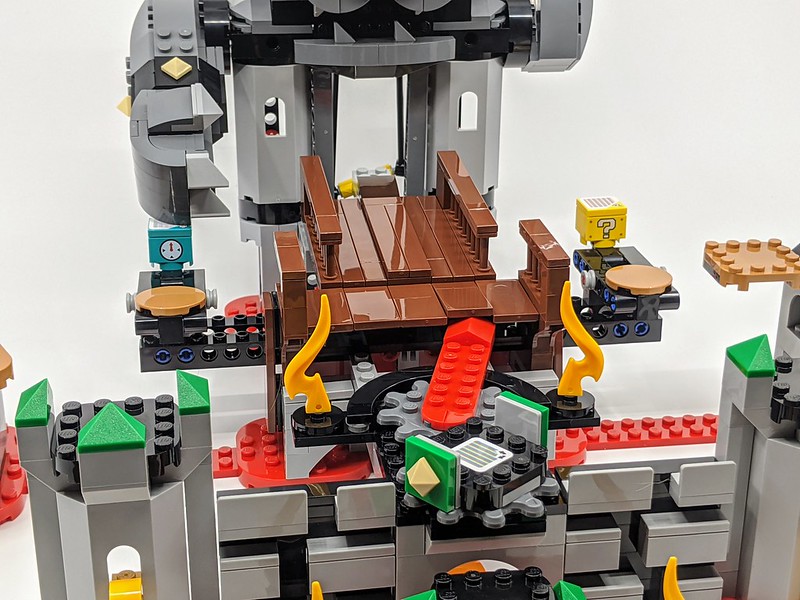 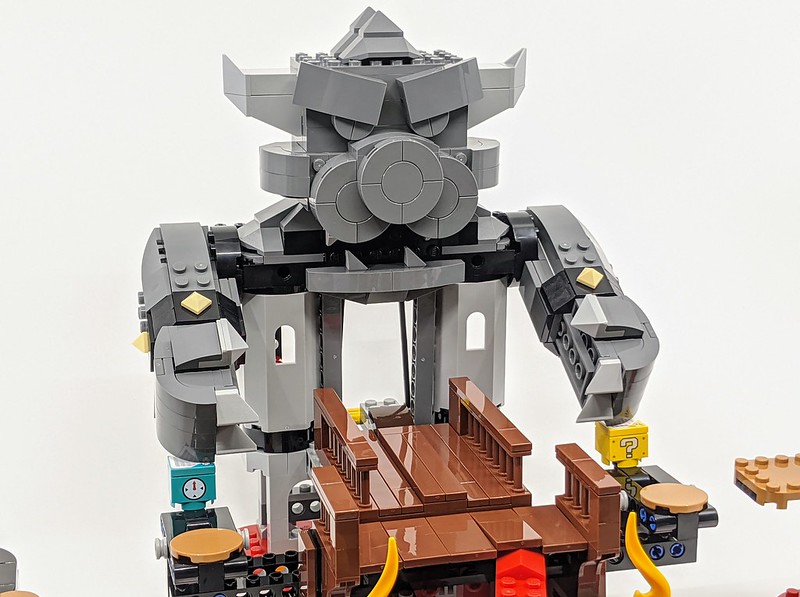 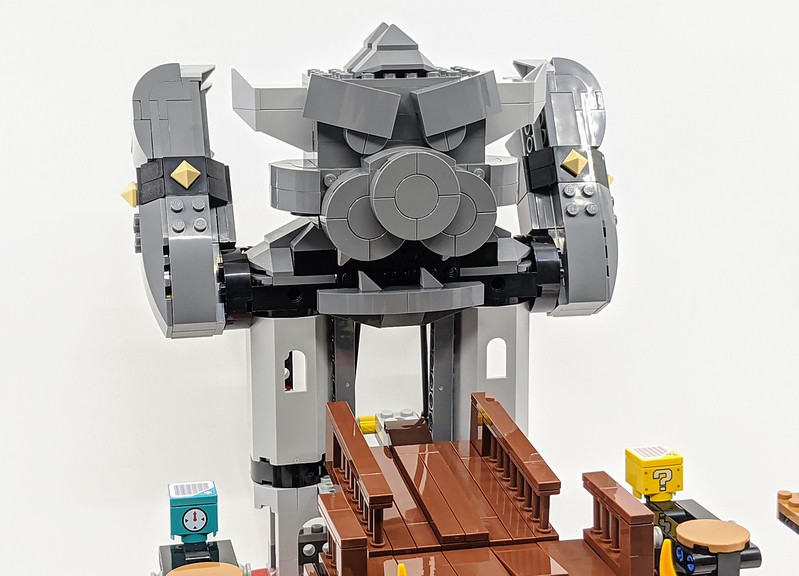 Now to take down the big bad and this is done by twisting Mario on that central platform, causing the arm to move underneath the hinges tiles and wobbly Bowser over. I highly recommend you play with this set on a solid and flat surface in order to get both the arm raising and Bowser toppling to work. If you don’t, expect it to take a while to bring Bowser down. It does feel a little wrong being so heavy-handed with a LEGO set, but despite how forceful I needed to be to get those arms up, not a single element came loose. 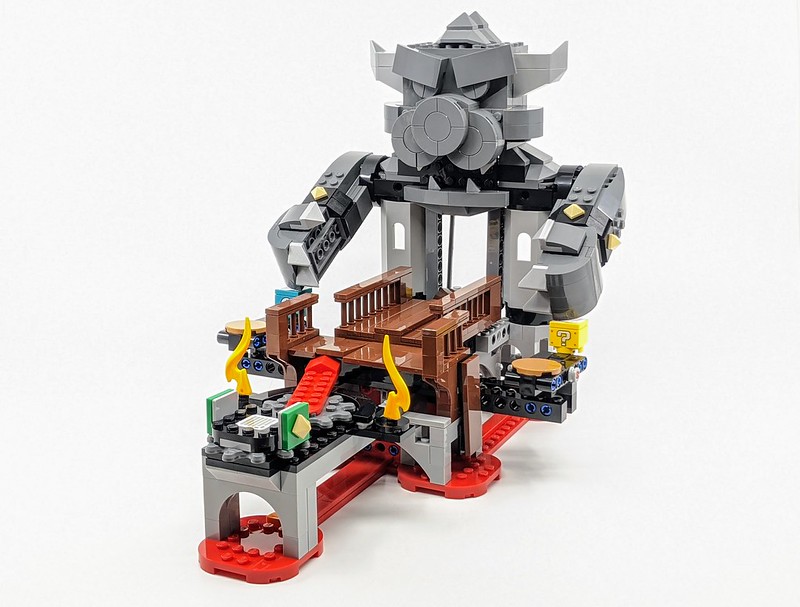 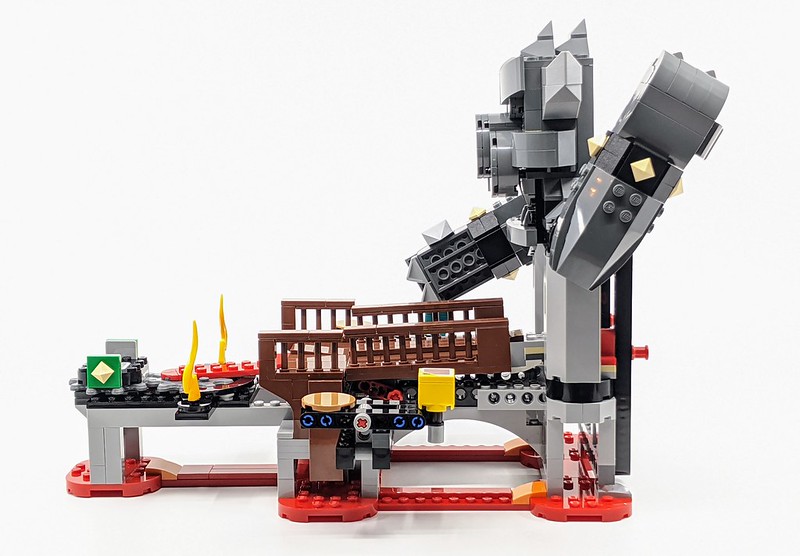 Beyond the impression Bowser shaped castle, there are a couple of other interactive elements to the set. A small flip plate catapults the Lava Sprite at the entrance to the castle. And there are two turret towers which have enemy-based actions. On one is a simple loose section, sandwiched between the tower, hitting this will bring down the Dry Bone. The other is a little more complex and involves a platform which circles the tower and also has a Boo doing the same. The action of a Boo, slowly chasing Mario is just like it is in the games. 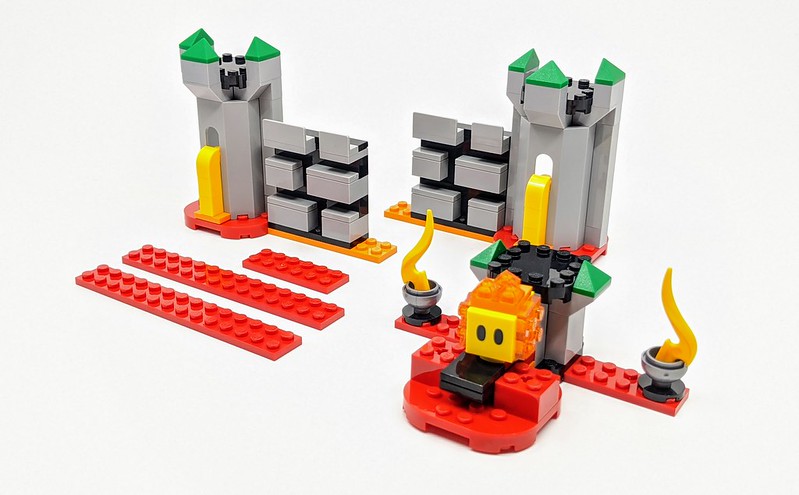 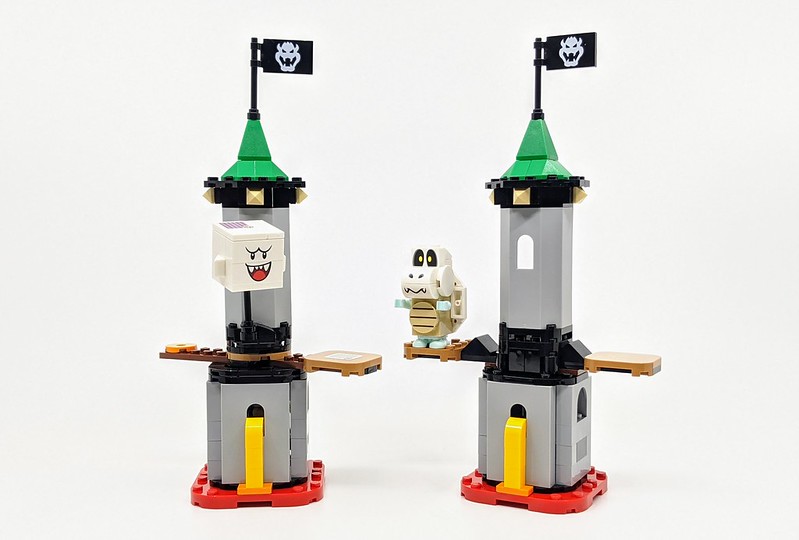 As with all the characters in the LEGO Super Mario, beyond LEGO Mario, Bowser is a brick-built character. Most of him is created with current parts, although some are recoloured and others printed. The only new element is the shell plate. Bowser’s look is quite rounded in the games after all a mutant turtle shelled dragon dude is going to be quite curvy. But I have to admit the LEGO Design Team has done a great job of reimagining the various Mario characters, not only in LEGO form but in a style which compliments LEGO Mario. However, LEGO Bowser isn’t as imposing as he is in the games, despite being a little chunkier, he isn’t much bigger than LEGO Mario is. 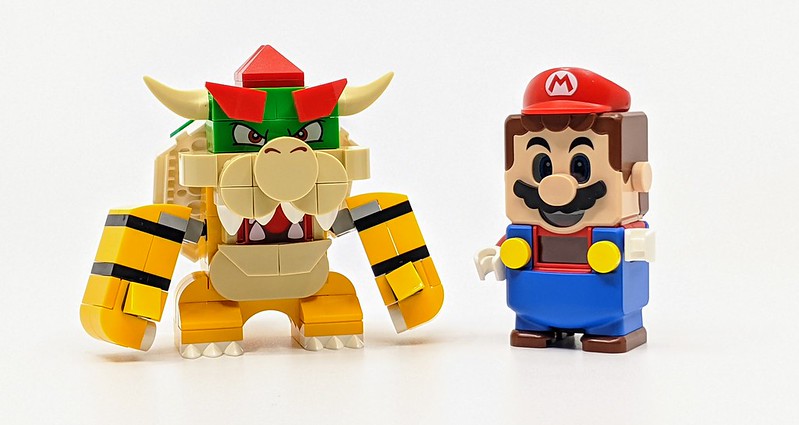 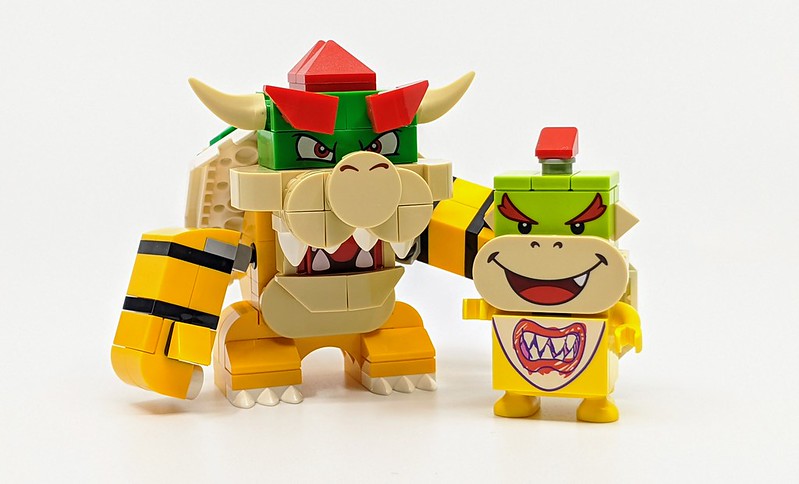 The set also includes a Lava Bubble Sprite, which has appeared in other sets, along with two unique enemies. One is a regular-sized Boo, who chases Mario around one of the castle turrets and the other is a Dry Bone. Which is basically a reanimated Koopa Troopa. It’s nice to see a variant of the classic turtle enemy, there are plenty of different members of the Koopa Troopa army, yet they are underrepresented in the LEGO sets. 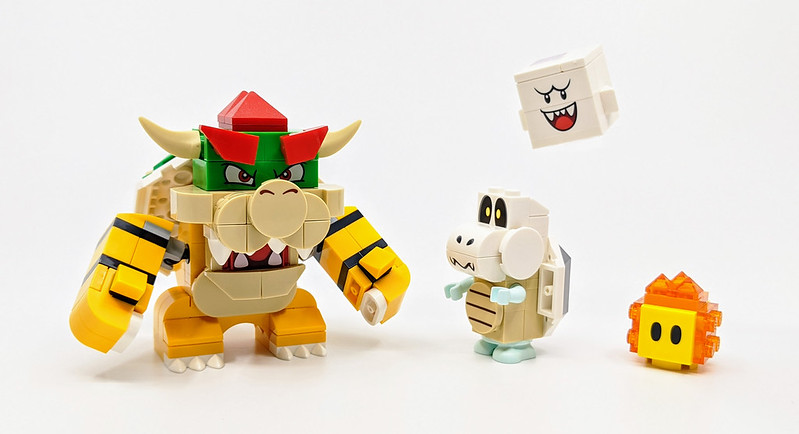 Despite the set being the largest of the range, it doesn’t feature that many Action Bricks. There are two blocks under stone Bowser’s arms, one giving extra time and the other a ‘?’ block. There’s one on the mini Boo, the Lava Bubble Sprite and the awesome Dry Bones. Plus Bowser has one on his shell and the platform which Mario uses to take down Bowser. 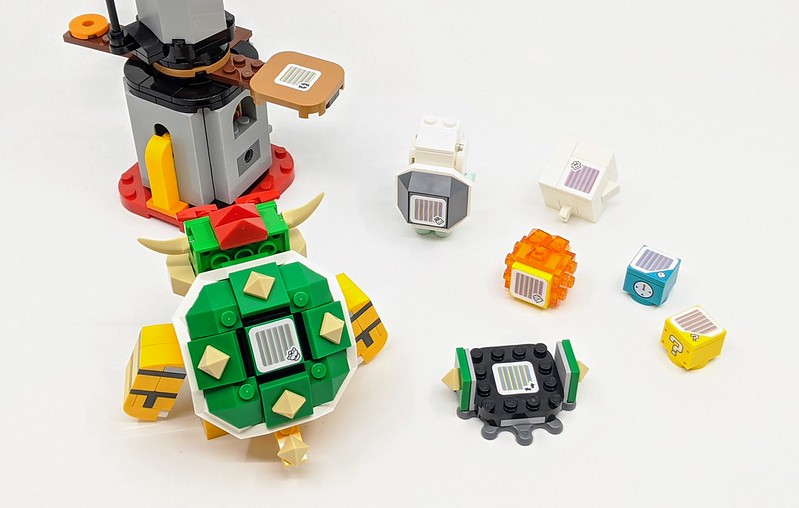 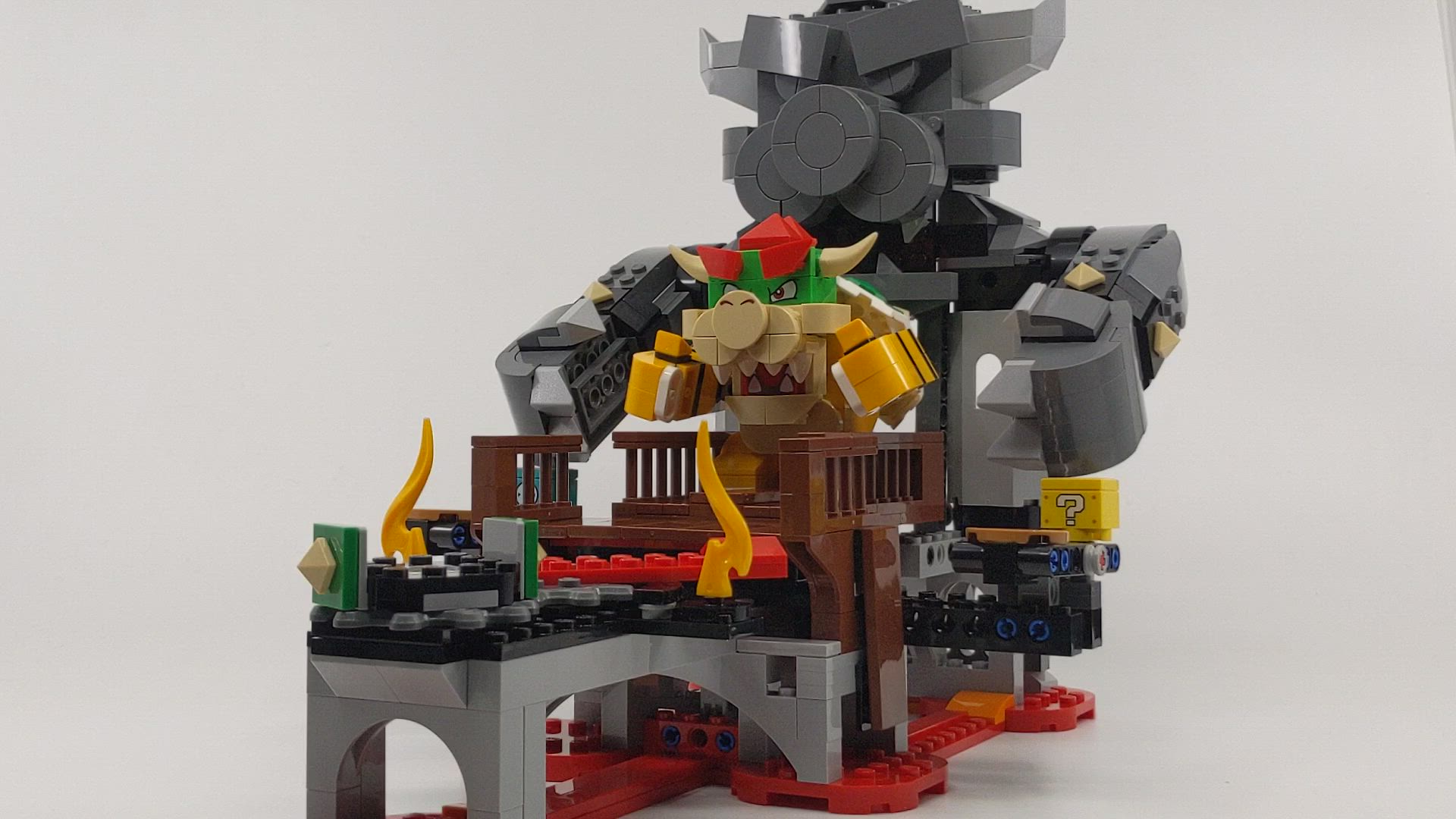 This is one impressive expansion set and has one of my favourite physical representatives of actions from the games. Before Bowser could be thrown by his tail, you’ll face him deep within his fiery castle. Taking him out could be done by felling a bridge. This action has been captured nicely yet adds a fun LEGO twist to it. As with the castles in the Mario games, this expansion set will certainly make a great finale to a LEGO Mario course creations. I love the way a huge stone Bowser not only looks great but has been incorporated into the play features. Even though you have to be unnaturally heavy-handed to activate it features. LEGO Bowser is a great recreation if a little on the small side. But if he was bigger, it would mean the rest of the set would need to increase in size in order to accommodate his bulk. Which may have limited the play features so I’m okay with him not towering over LEGO Mario. I also appreciate that the other enemies are unique to the set. I’m surprised that although this is the largest and most expensive LEGO Super Mario set, it doesn’t contain the most Action Bricks. You may not be a fan of the route LEGO has taken with their first product partnership, but they have poured a lot of effort into making the sets as close to a Mario game as they could be. This set is a great example of that.