The LEGO NINJAGO theme has always had a nice range of varied vehicles but the game was upped with the release of The LEGO NINJAGO Movie. Each of the ninja have their own unique mechs, all of which make for an equally unique LEGO. Although most of these mechanised machines follow the traditional robot, tank or flying style, there is one which really stands out. Nya has the elemental power to control water and the set designers have really taken to this connection when creating Nya’s craft. It’s the only mech to have a insect air about, as it’s modelled after a water-faring Pond Skater. These long legged insecta, skim across the surface of the water just like Nya’s Water Strider, but how to that translate into a LEGO set? Let’s take a closer look at The LEGO NINJAGO Movie set 70611: Water Strider. 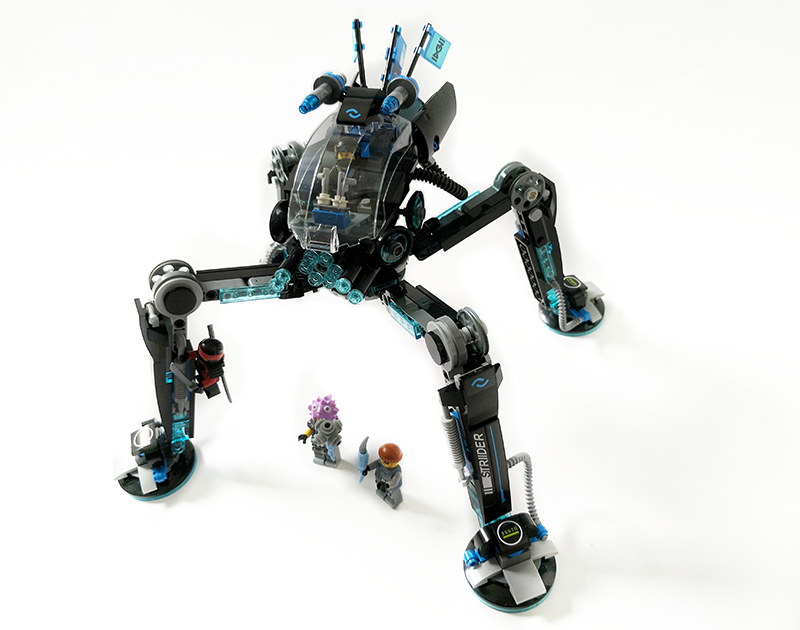 Launch into battle against the shark army and pretend to walk on water and climb walls with this awesome THE LEGO® NINJAGO® MOVIE™ mech. The Water Strider features a 360-degree rotating minifigure cockpit, 6-stud rapid shooter and 4 posable legs and feet to create powerful battle poses. The set also includes 4 minifigures with assorted weapons to add to the ninja vs. shark army role-play battle options..

You kick things off by creating the cockpit unit and main body of the Water Strider. This is built around a central disc platform with also allows the main piloted part of the cockpit to be rotated which is achieved with one of those satisfying turntable plates. This section is quite chunky but it’s nicely hidden with various dishes and the stud shooter. The new cockpit canopy element helps to give this central unit a nice shape, although it’s slightly annoying that it needs to be completely removed to access the inside. The additional details added to this part of the build are particularly cool, especially the samurai-type trio of flags clipped to the back of the Water Strider and the water tank at the rear of where Nya sits. This uses two transparent curved wall elements to represent a water-filled tank, two corrugated pipes then make it appear it’s feeding the stud shooter barrel at the front. Two Technic panels flank either side of the tank to help it feel more part of the overall set, instead of merely tacked on. 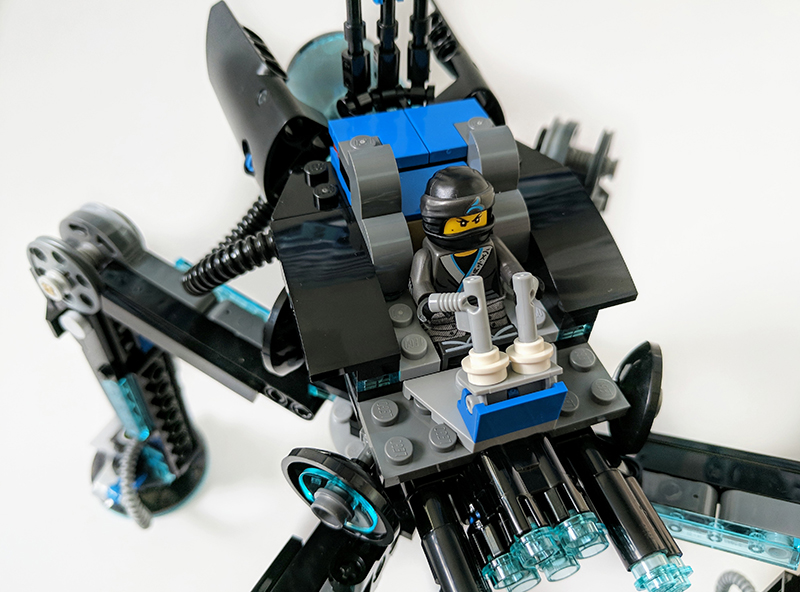 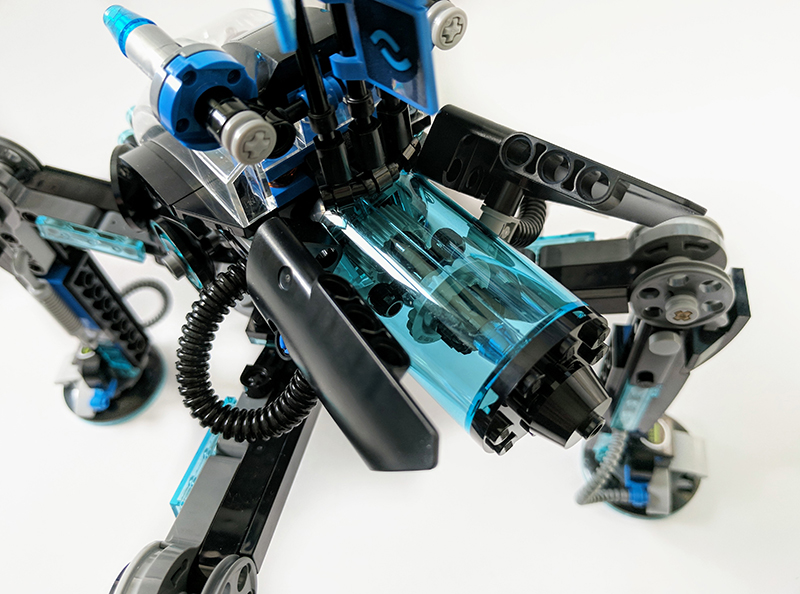 As you can see above that ‘water tank’ has a fun little of detail built within it. Little things like this are always a welcomed addition to any build and although they might not be blindingly obvious or add anything in terms of play functions. You’ll also notice there are a few Technic pieces used across the build, sometimes the use of these can feel at odds with the LEGO system bricks, but they actually work to the sets aesthetic here. One of the major parts of the build is the four legs. These are made up of two main sections, the feet and the leg. Although they might not look that involved, there is a fair bit of construction in them, however they are quite receptive. Each leg has two points of articulation, at both the ‘knee’ joint and the ‘ankle’ this allows for interesting poses. Even those they can’t really been seen, I love the use of trans blue radar dish elements for the soles of the feet. The use of black and these trans blue pieces wouldn’t see the set out of place in the Ultra Agents fleet. Still one of the best LEGO themes of recent years. There are a number of stickers used on the legs but they add a nice amount of detail to them. 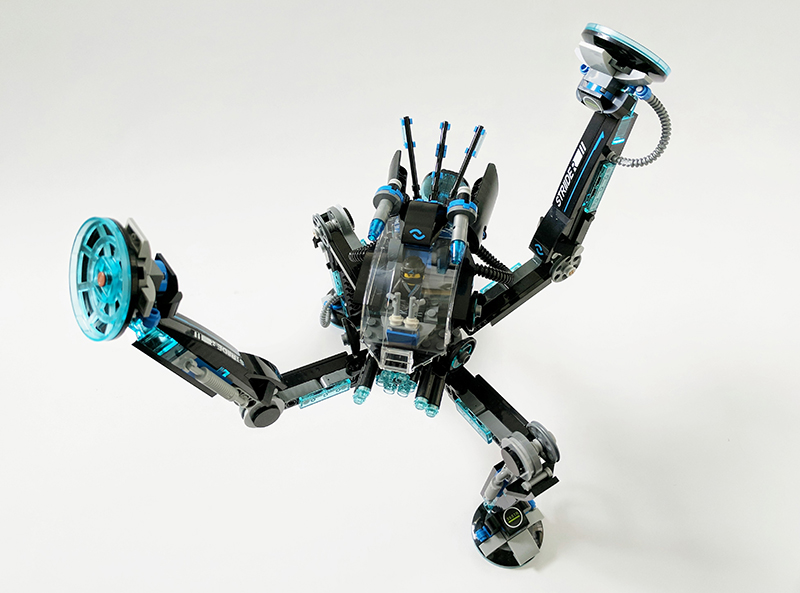 The set includes four minifigures, two good guys and two guys. Nya is a given considering it’s her mech which is the focus of the set and she is joined by her brother Kai. But it’s the Shark Army goons who are the stars of the set, in particular Puffer. You’ll have already seen much of the Garmadon’s aquatic-themed battalion have really taken branding to heart. There’s sharks, octopi and Angler fish but the best of the bunch is most certainly the Puffer. This uses an all new puffer fish-styled head piece has a helmet. It’s unlikely to have any use beyond this theme but that doesn’t make it any less cool plus it’s currently only appears in this set. Although much of the Shark Army is fairly generic from the neck down, these crazy caps certainly help to given them some character. 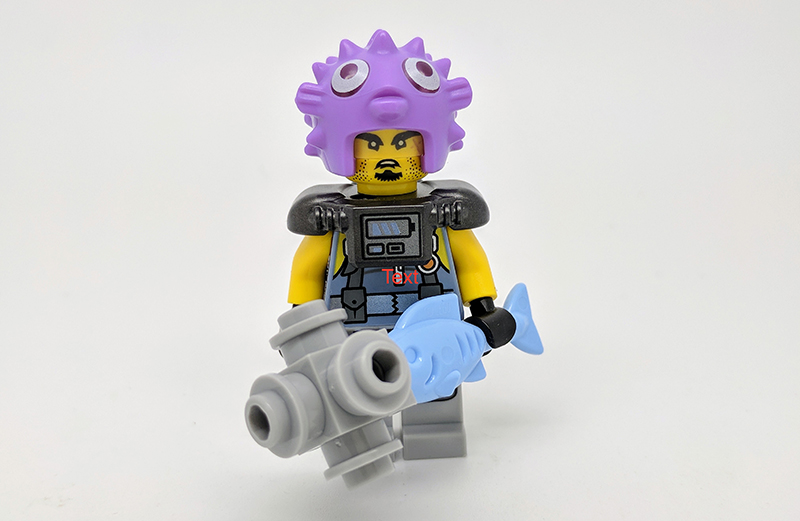 The second Shark Army goon is definitely more generic, his only fishy feature is a weapons which uses a recoloured fish element. He does have a great face print those, especially the eye patch. It seems eye brows are as important part of being a member of the Shark Army as the fishy accessories. Both goons have nice print details on the torso and legs although it’s pretty much the same across the Shark Army. 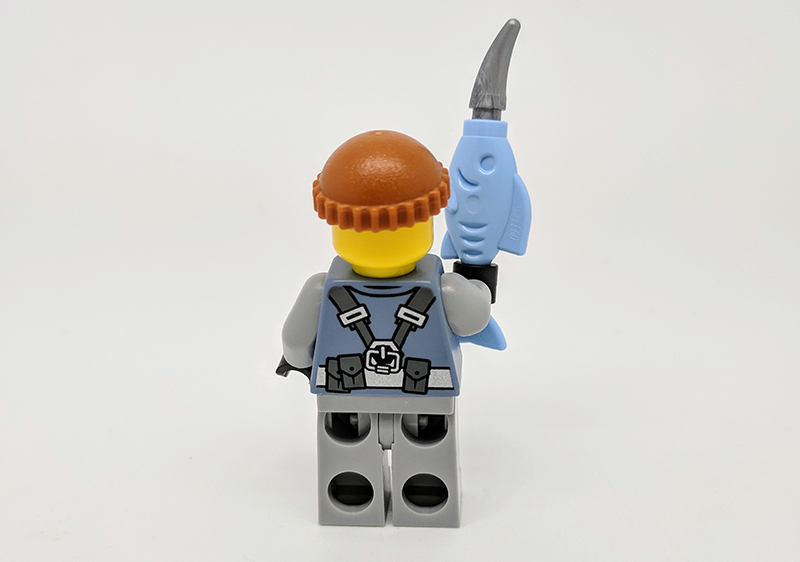 Both Nya and Kai appeared in a few of the other NINJAGO Movie sets, although Nya is a given considering this is her mech, I’d of preferred to have either a citizen, another Shark Army goon or better still Nya in her street clothes in place of Kai. He may be Nya’s brother, but he already appears in a fair few other sets. Which is made even more odd, as he doesn’t have any more screen time than the other non-Green ninja characters. 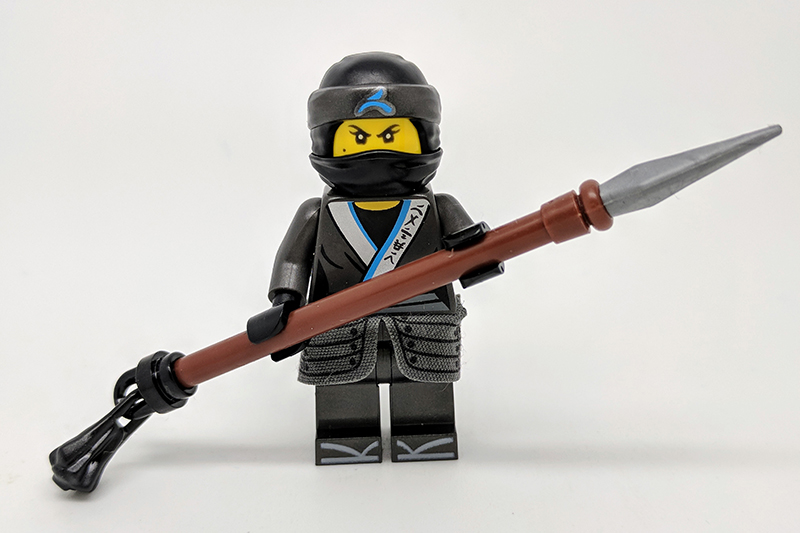 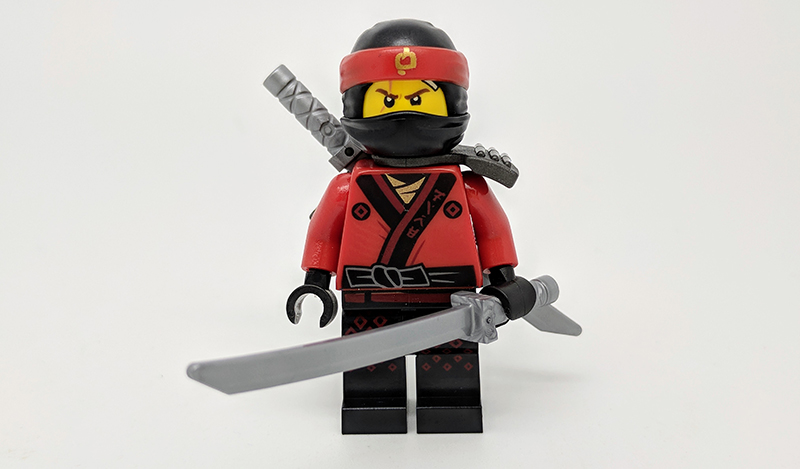 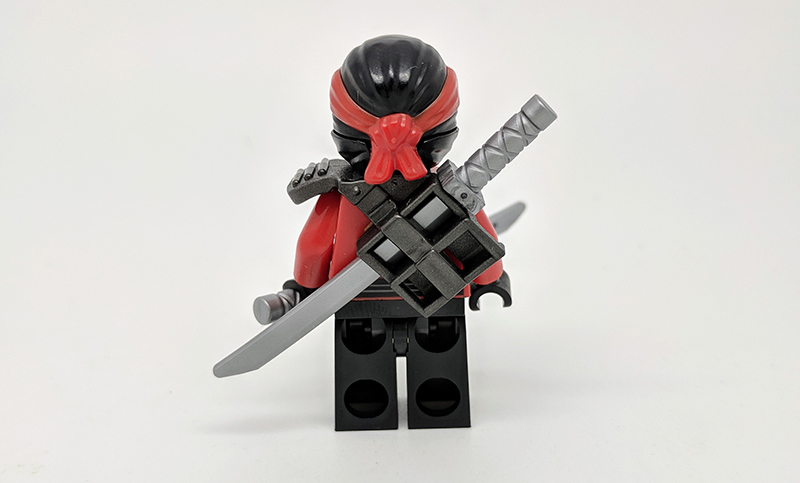 I love that this set has a bit of an Ultra Agents feel to it, and the mechanisation of a water dwelling insect is a fun twist for Nya’s vehicle. Although the build it quite repetitive thanks to the four similar legs, the end result looks great and those legs offer some great play functions. The central cockpit looks great especially all those stud lights along the front, almost doubling for the multiple eyes of a bug. These also double up as a barrel stud shooter, which have become quite rampant in LEGO sets of late. I’d of like to have seen a different spread of minifigures, Kai didn’t need to be included in my opinion, another Shark Army goon, NINJAGO citizen or better still non-ninja Nya. It would of also been nice to maybe of had a little Shark Army vehicle as well, nothing huge just a flying clam or mini crab mech. Apart from that its decent little set and a little unique when compared to some of the other ninja mech.The Water Strider is available now from shop.LEGO.com, LEGO Brand Stores and all good toys retailers.

Thanks to Norton PR for sending us the set to review, the opinions expressed in this review do not reflect those of the LEGO Group or Norton PR. The entire range of The LEGO NINJAGO Movie sets are available now from shop.LEGO.com and all good retailers.