The Hidden Side is officially here and over the next few weeks I’ll be reviewing every single set in the first wave. After taking a look at the smallest set in the range a few weeks ago, today I take a look at one of the most anticipated. The Paranormal Intercept Bus 3000, is based around a classic US-style School Bus. These iconic yellow buses have appeared in numerous US TV shows and movies, recently one also appears in hit video game Fortnite. In Newbury, the converted bus has turned into a mobile ghost hunting lab. It’s also sprinkled with a couple references to bygone LEGO® themes. Get ready to hop aboard this powered-up bus and get ghost hunting. 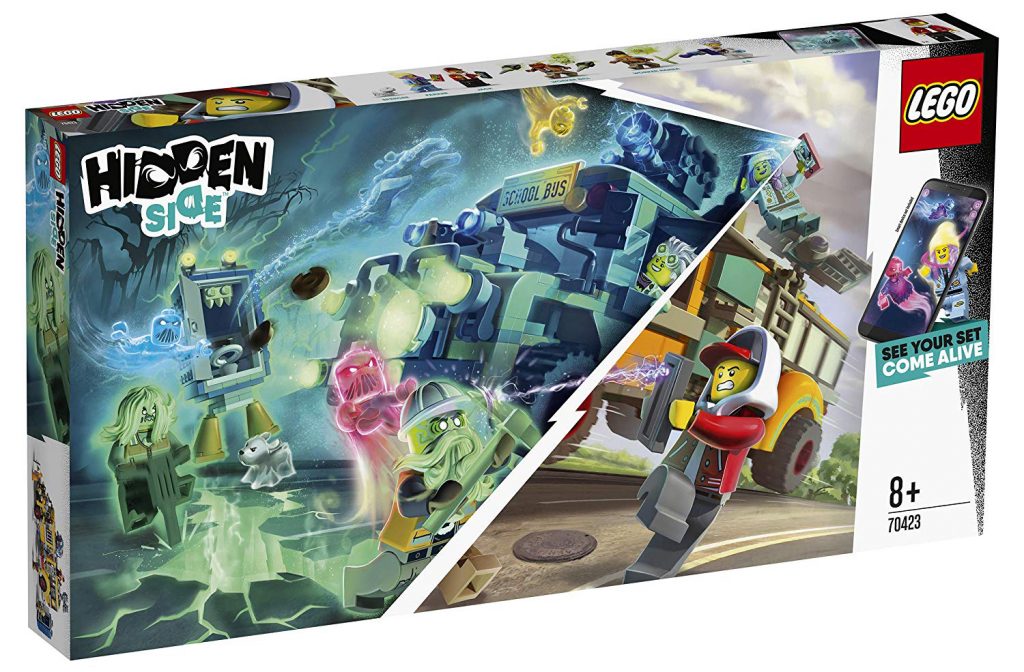 Immerse kids in a fast-paced augmented-reality play experience with the LEGO® Hidden Side™ 70423 Paranormal Intercept Bus 3000 playset. Download the Hidden Side app and scan the model with a phone to make it come alive – interacting with the model makes things happen in the app. With continuous updates, a unique boss ghost to battle in each set, new mysteries to solve, cool items to find, games to play and ghosts to collect, this LEGO Hidden Side set offers kids a whole new way to play and interact with building bricks! This powered-up school bus toy features cool tech details, like a pull-out command center and flip-out toy cannons, to inspire hours of creative play. With 2 hero minifigures, each with his and her own smartphone, tech genius J.B., 2 haunted workers and cute ghost dog figure, this building set features a lot of fun play-starters. 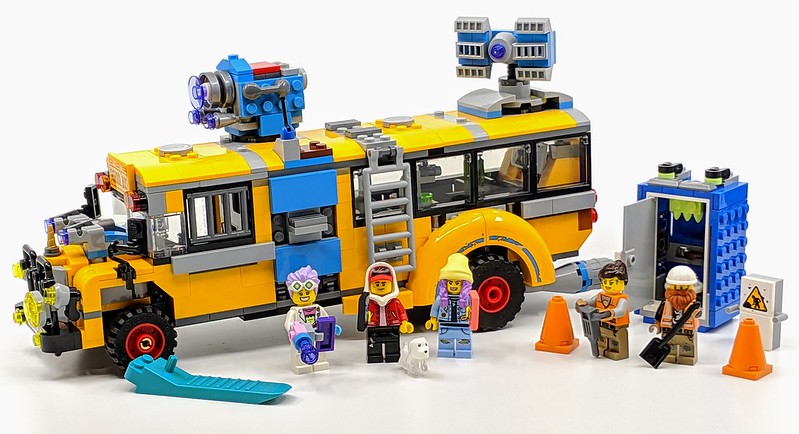 Before you get building the bus, you create a fun little port-a-loo. This simple build looks like any other portable toilet you’d find on a building site. But it hides a secret, once the Hidden Side is revealed, the loos monstrous mischief manifests. The two cones and road sign, combine to fashion legs, which are connected to the base of the loo. Then a pair of eyes can be flipped on it too, with a pale green teeth also dropping down from with the roof area. 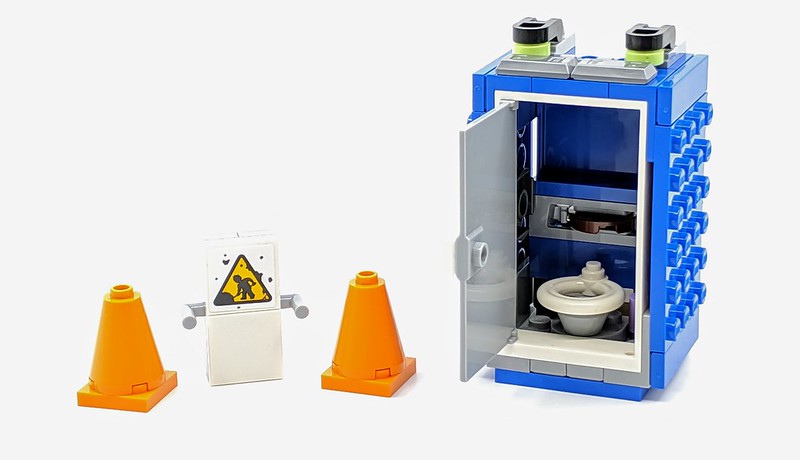 This transforms the port-a-loo into a ghostly monster. But it doesn’t stop there, within the back wall of the loo is a disc shooting brick. This launches brown 2×2 round tiles. I can only assume by the colour, these are meant to be created from material often deposited into toilets. The whole thing instantly took me back to the days of the Real Ghostbusters cartoon and it’s gruesome array of action figures. Many of which transform everyday objects into spooky monsters. 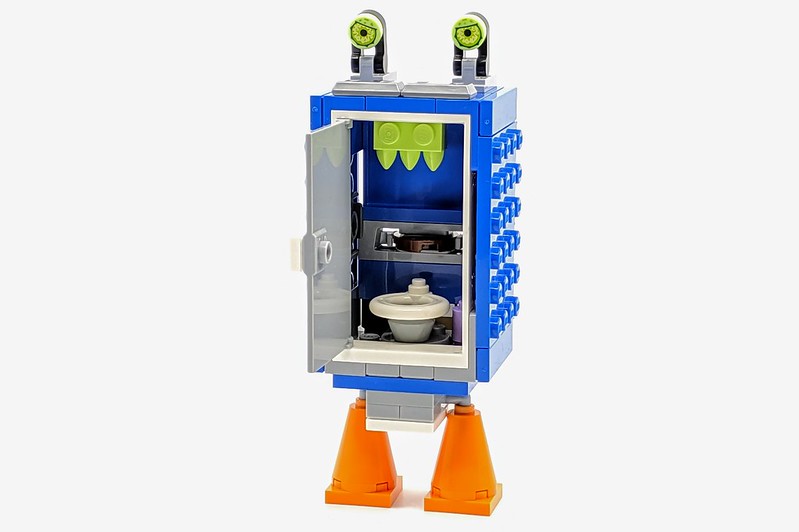 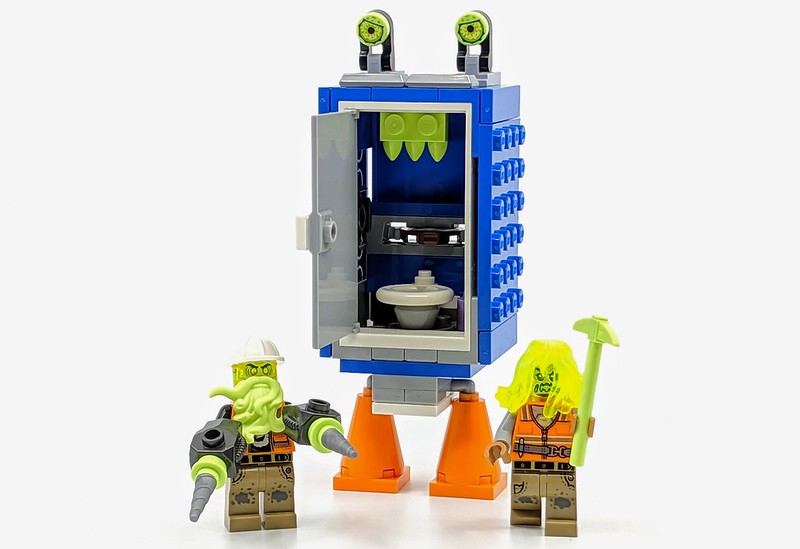 The main part of the build is of course the school bus. As mentioned above this is styled on a classic yellow US school bus. Which has been jazzed up a little to act as a mobile base for the ghost hunting crew. Much of the base of the bus is unchanged, but it’s the additional pieces, which make it just a little more fun. I love the shape of the bus, it instantly looks like a US school bus, even with all the added bits of bobs. The front of the bus is extremely well done, I particularly like the two black bull bars covering the classic radiator grill. The front also offers the first of the sets fun LEGO Easter Eggs, with the stickered number plate reading ‘GG 4940’, a direct reference to the Power Miners set, 4940: The Granite Grinder. There are a couple of stud-firing cannon mounted on the bonnet, a classic go to play feature for sets. Another neat piece of detail is a stickered plate featuring the words ‘School Bus’ with some of the lettering crossed out to read ‘Cool Bus’. I’m a sucker for using parts meant for one thing as something else. So the two paint roller handles used for wing mirrors is rather delightful. 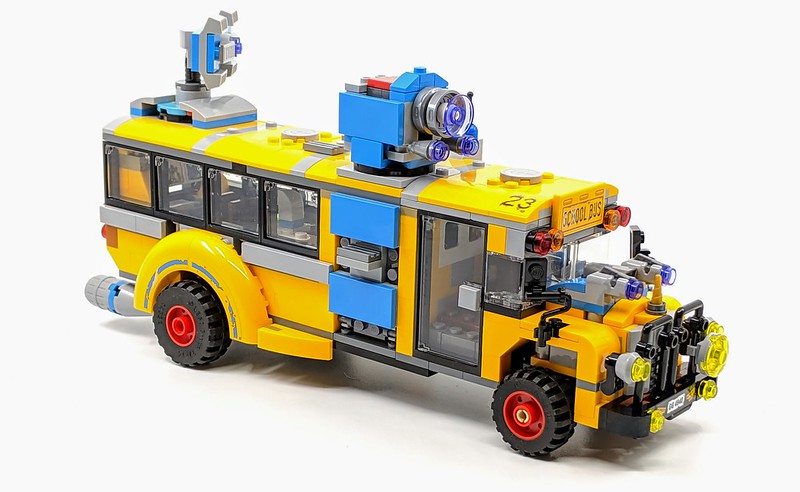 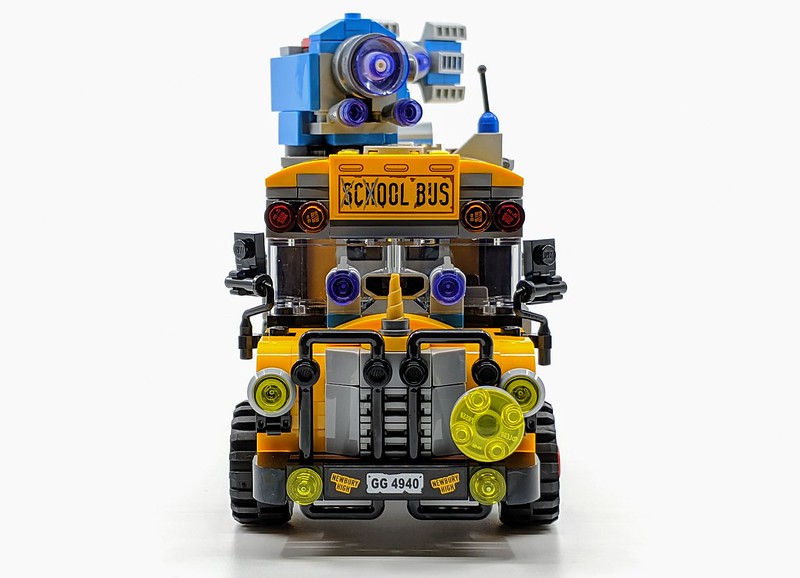 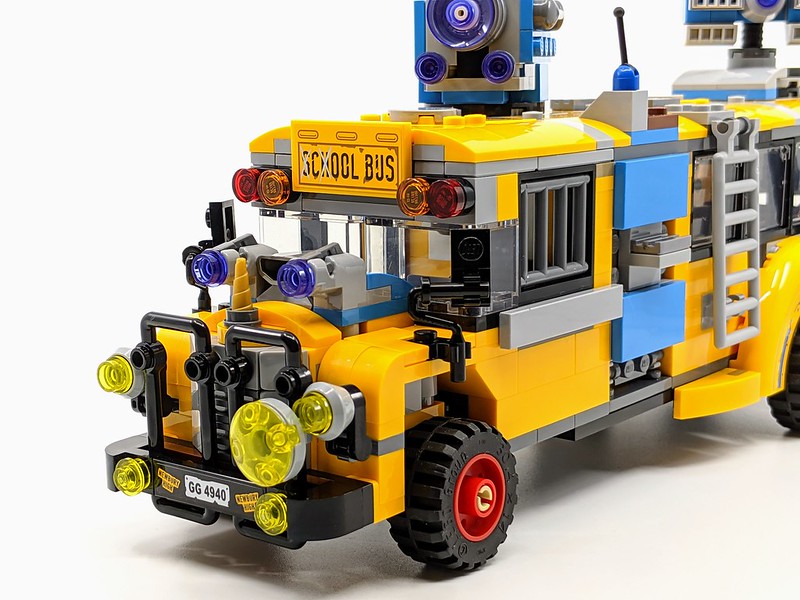 The top section of the front of the bus can be easily removed to gain access to the driver’s seat. This is spacey enough to not feel cramped, which makes it easy to place a Minifigure. I quite like the bars used on the window, but I’m in two minds about the door. A bus would have a folding door, which would be a little tricky to have here. Instead a large ‘window’ paned door is used. Maybe this has been cobbled together from random pieces found around J.B.’s lab. It possibly needed a sticker on it, just to break up the large surface area. Although the door may look a little odd, I love that the windows along the sides of the bus can be opened. 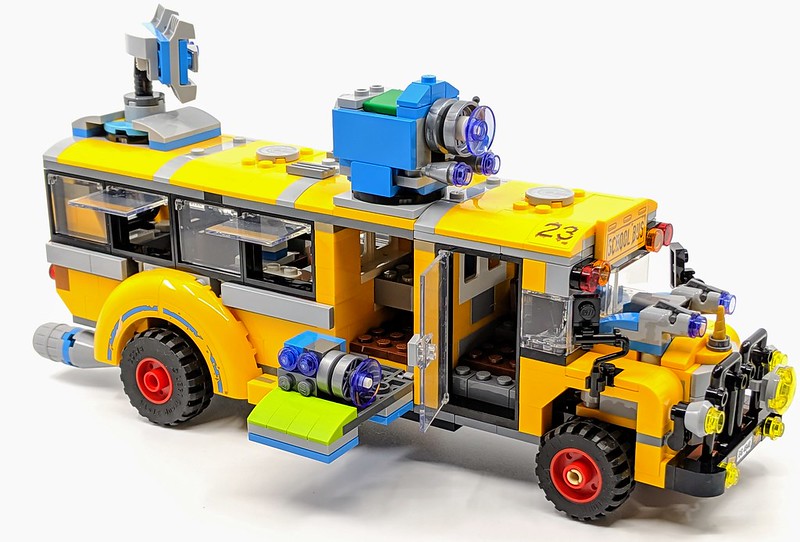 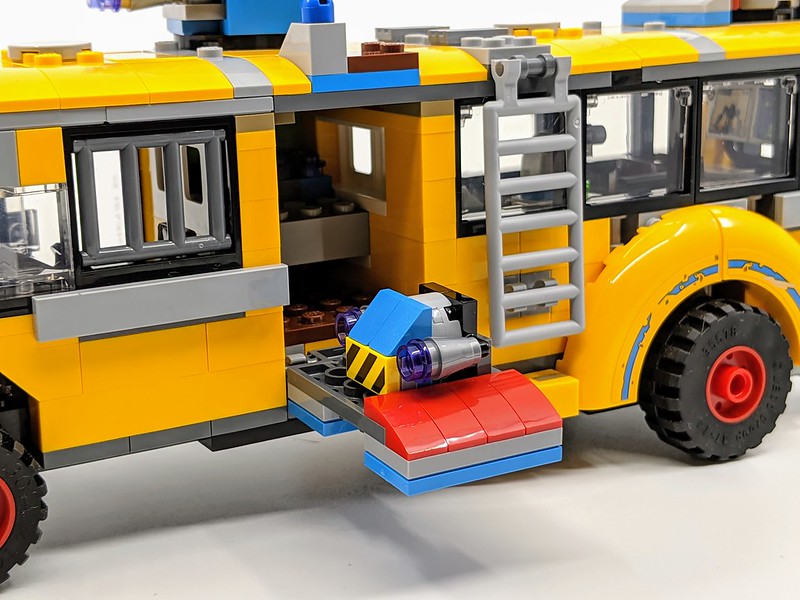 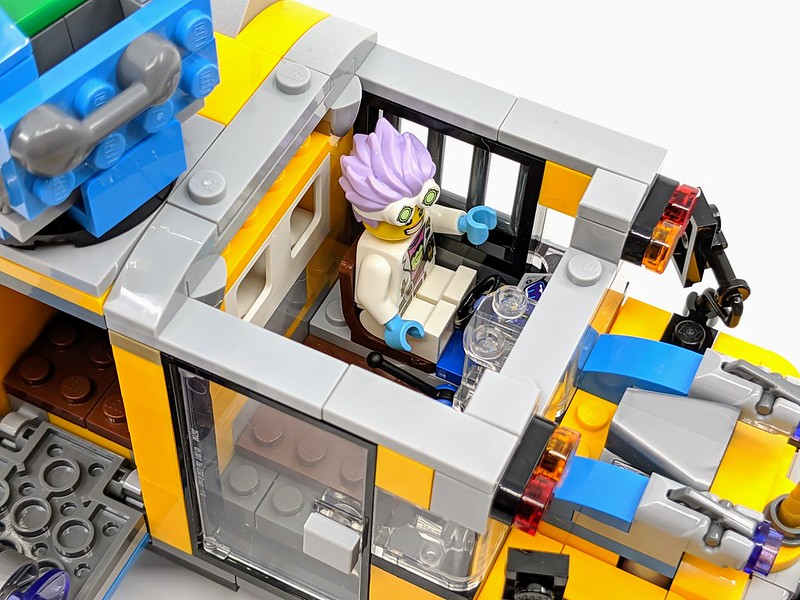 Many of the elements added to the bus, could be considered oddly coloured. But they are coloured in such a way to help with the AR elements and the colours used are consistent across the many of the Hidden Side builds. Meaning you can easily tell what’s J.B.’s tech. The additional contraptions added to the bus include two flip out doors either side of the vehicle. They don’t have any play functions as such but look quite cool. Upon the roof are two more ghost capturing devices. The one nearer the front of the bus, features a flippable cube, which can show either a red or green tile. Again for use with the AR elements. Towards the rear of the bus is a satellite dish, this doubles up as the main AR marker. It features the three unique coloured bricks, which help to uncover Gloom spots in the AR game. 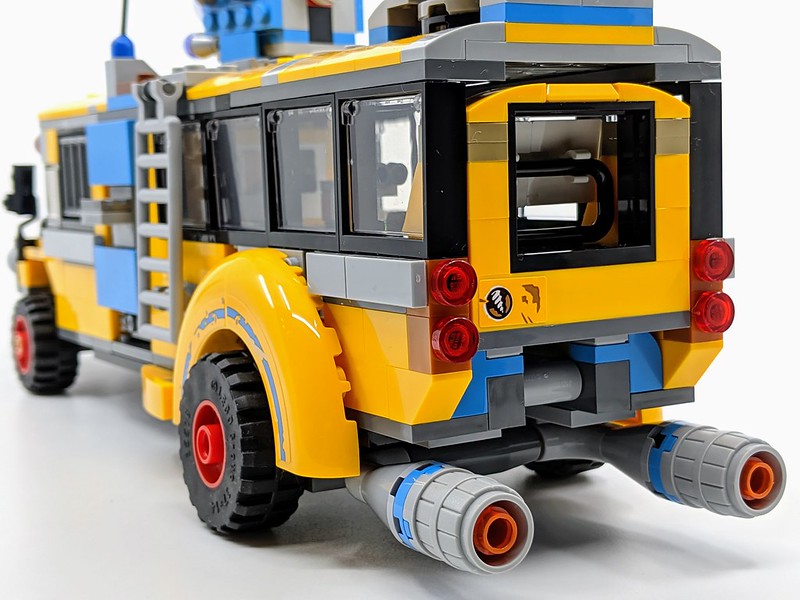 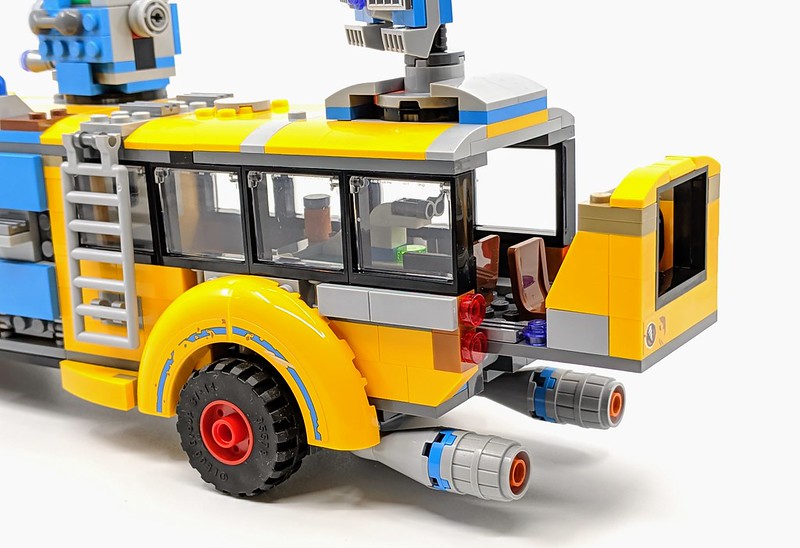 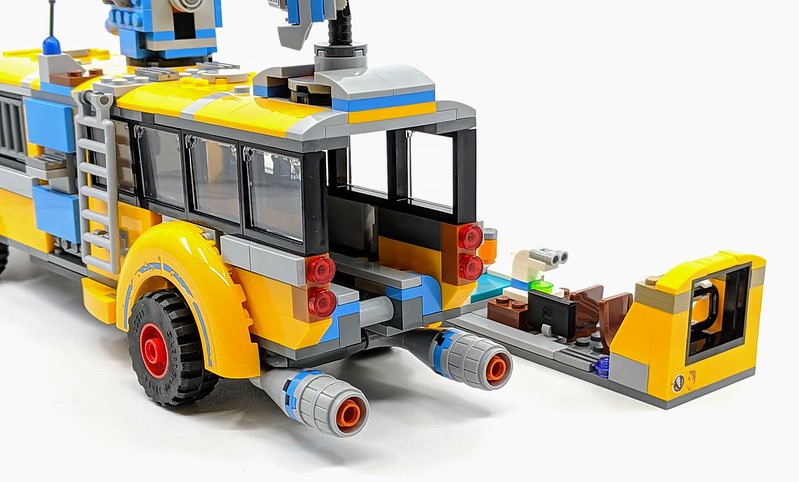 The rear of the bus has a lot going on. At first glance it looks like the back of any other bus would. But the whole back sections can be removed from within the bus. This acts as mobile lab, and features a really cool microscope and a bank of computer screens. There are also two seats and a bed. Consider this is such a small section of the bus, it features a lot of detail. Including a couple more nods to LEGO themes of years gone by. A sticker at the rear of the bus features a familiar driller symbol from the Rock Raider theme. On one of the screens is another LEGO Easter Eggs, this features the legendary Mata Nui from the much loved Bionicle theme. 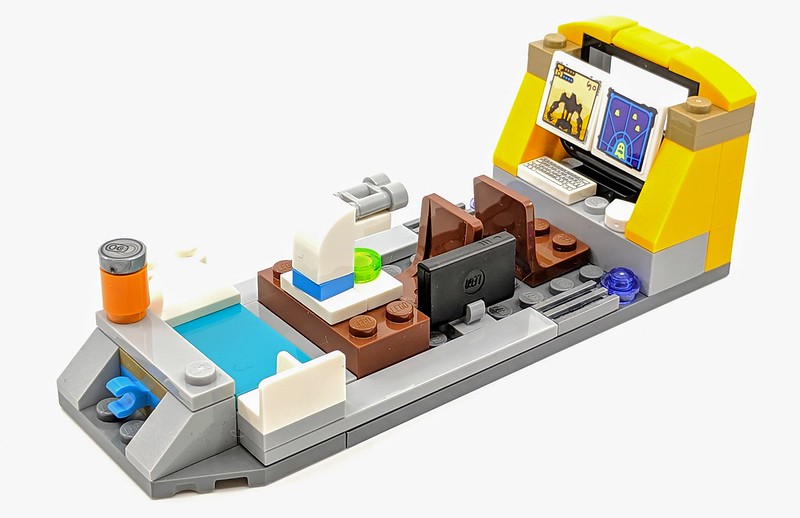 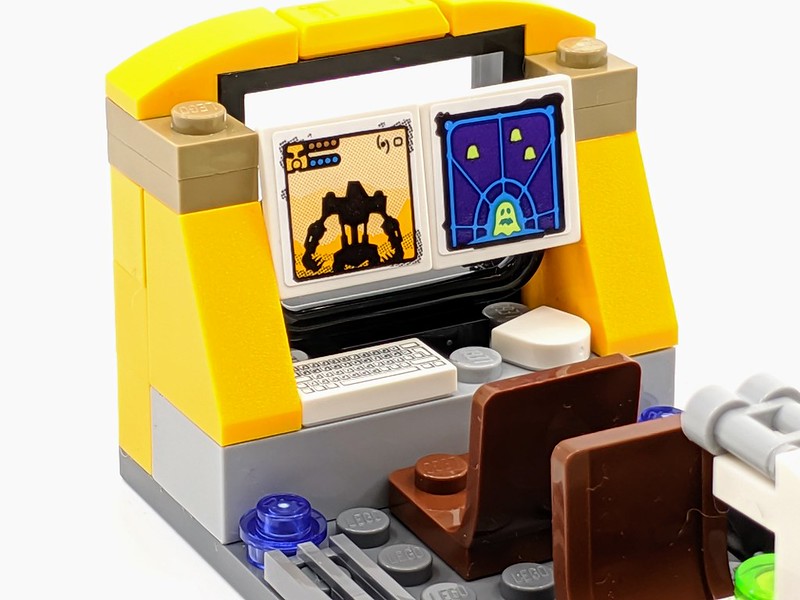 The set features five Minifigures, two Hidden Side spooks and the paranormal pooch, Spencer. As is the case across the Hidden Side theme, along with the main characters are various Newbury citizens. This set includes construction workers Nanna and Bill. They are fairly standard looking characters, who are both kitted out in similar looking high vis outfits. Nanna features yet another fun LEGO Easter Egg, you can just about make out the Blacktron logo showing through her vest. 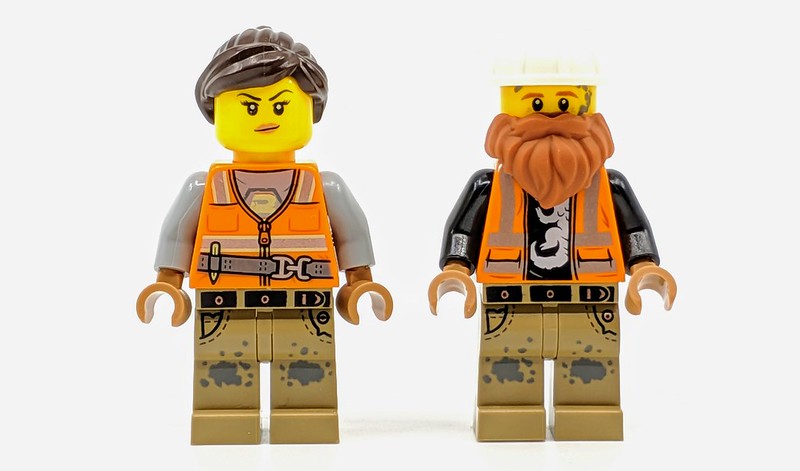 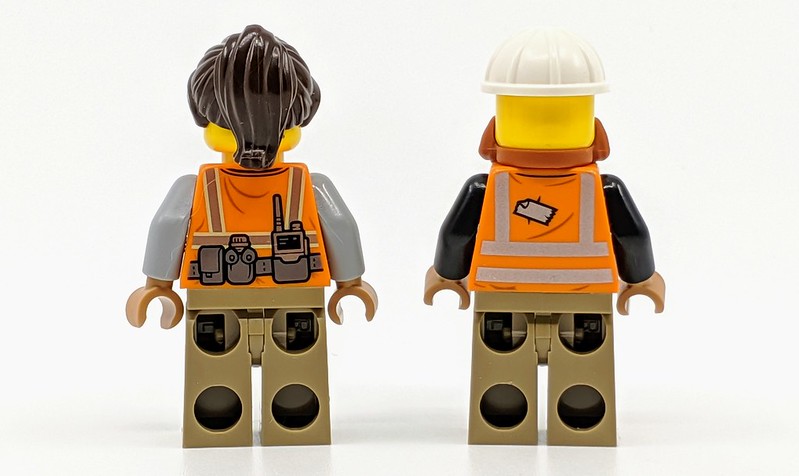 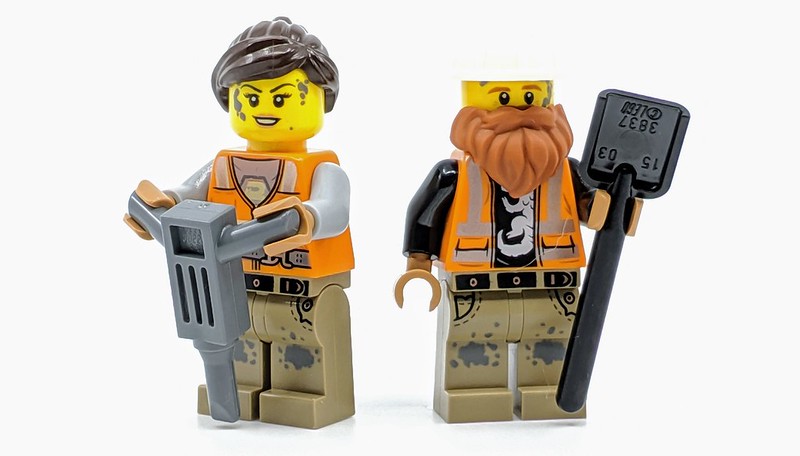 When the Hidden Side takes over, both Bill and Nanna become possessed by the ghostly spooks. This merely involves swapping their heads and hair for the ghostly versions. These seems to be similar across the various sets, but the bright transparent green colouring, certainly makes them stand out. I also like how they are given ghostly Soul Artifact accessories. Nanna gets a pale green pickaxe and Bill as pair of fist-mounted drills. 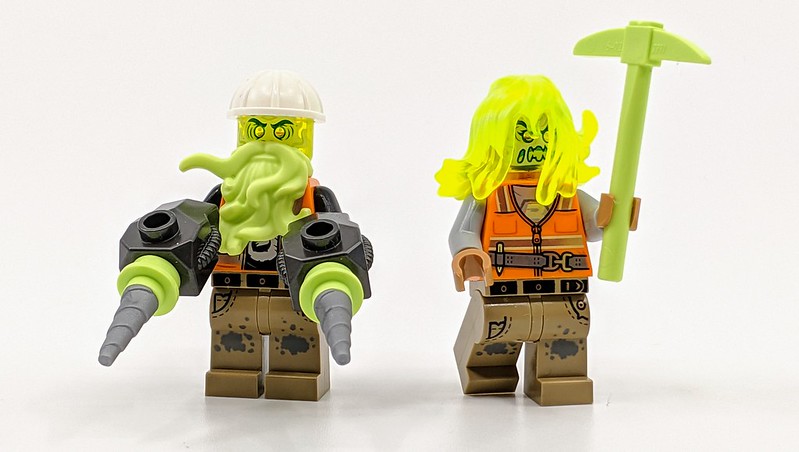 J.B. is one intersting looking Minifigure, thanks to her awesome new hair piece and detailed torso and legs. Think Doc Brown from Back to the Future, but just a little crazier. The print detail is great and I particularly like the mini Frankenstein’ Monster on her shirt, although of the couple of sets I’ve built with her in, I would have liked to have seen a little variation. Last up is the Hidden Side’s two main characters. Jack Davids may not be overly detailed but does feature a new hair accessory, which is a cap covered in a hoodie. Parker is a little more colourful, thanks to also having a new hat/hair element and a detailed torso and legs. Jack and Parker both feature printed 1×2 tiles to represent their ghost catching smartphones. With J.B. having a cool looking device which mixes a smartphone with glittery cone element and one of the new weapon handles from the Overwatch theme. Combined these create a neat little ghost busting doohickey. 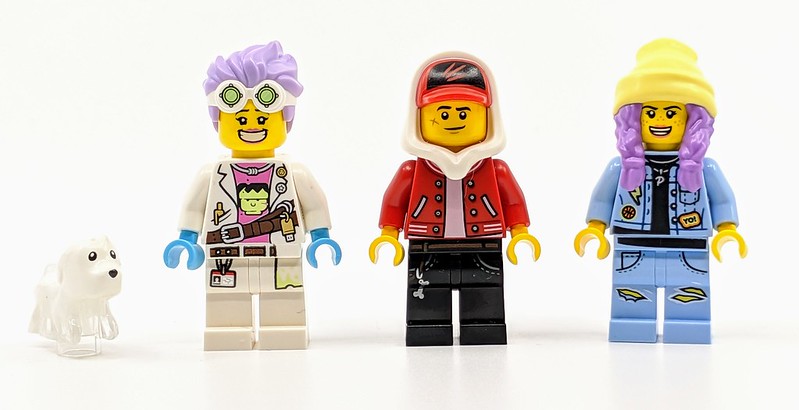 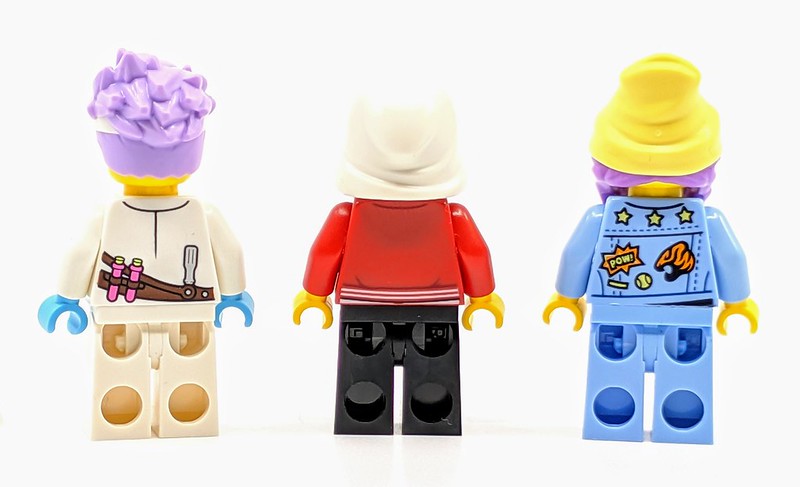 One of the additional play features of the Hidden Side sets are an AR powered game. The set is perfectly fun on its own, but you can enhance play with the addition of the LEGO Hidden Side AR app. This brings the set to life by overlaying graphics and animated elements around the physical set. The Paranormal Intercept Bus 3000 looks great when incorporated into the AR scene, within the app. When you battle one of the boss ghosts, the set ‘speeds’ along a highway as you blast the ghostly foe. There are various specifically coloured elements which act as scan points. The colours can be scanned with the app, to unlock collectibles and ghosts.

This is probably one of the most anticipated of the Hidden Side sets and after building it, I love it even more. The various nods to other LEGO themes is great fun and something I adore seeing in LEGO sets. The build is engaging and not overly repetitive despite the similar sections it features. There could have been a little more play functions with the flip out doors, especially as not everyone will partake in the AR aspects of the set. The bus is the main focus of the set, but the port-a-loo is just as fun. Often these sort of ‘scenery’ builds are there to make up the numbers, but not here. A transforming poo-shooting monster toilet is certainly a first for LEGO. The Minifigures are fun especially J.B. and Nanna. This is one of the Hidden Side’s most interesting sets, fun to build and sprinkled with plenty of fun details. Definitely worth the price point, which is another great thing about non-licensed themes. They can be more creative without having to be overly constrained by hitting a certain price point, whilst also allowing for a cut to be given to the IP owner. If you like these story themes as much as I do, I urge you to pick up some of the Hidden Side sets.