I’ve made no secret of my love of the LEGO® story theme, from Monster Fighters to Galaxy Squad, these unlicensed sets are packed with all sorts of amazingness. With sets based on other peoples IP on the rise in recent years, I thought the story theme was all but done with. That was until the announcement of the Hidden Side. This intersting new theme is an original IP along the same lines as those mentioned above. Set in the town of Newbury, there are some strange things occurring and it’s up to teen vloggers Jack and Parker, to uncover the Hidden Side and rid the town of the ghostly foe. I’ll be reviewing the entire first wave of Hidden Side sets, but couldn’t resist grabbing this particular set a little early and giving it a cheeky review. 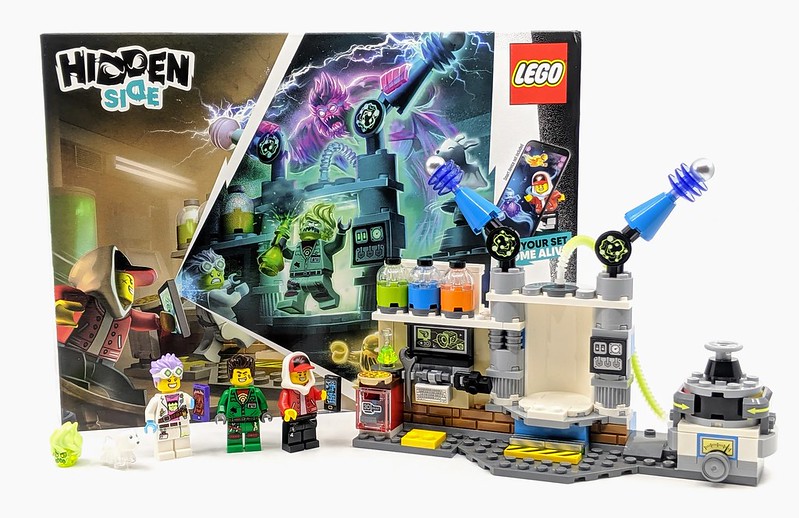 Immerse youngsters in an amazing augmented reality play experience with LEGO® Hidden Side™ 70418 J.B.’s Ghost Lab. Hidden Side delivers an exciting new way to play with LEGO toys by combining a LEGO model with a game app for a fully interactive experience. Download the Hidden Side app and scan the model with a phone to make it come alive. Interacting with the model makes things happen in the app. And with continuous updates and new mysteries to solve, items to find, ghosts to defeat and tough boss ghosts to battle, this LEGO Hidden Side set takes LEGO play to a new dimension! J.B.’s Ghost Lab features a lot of cool tech details and scientific equipment inspired from the real world for hours of imaginative play. Kids will love to build and play with the mad scientist-inspired lab playset and defeat the ghost figure that’s haunting the friendly janitor in the app. The hero, haunted janitor and scientist girl minifigures, and cute ghost dog figure add to the role-play fun. 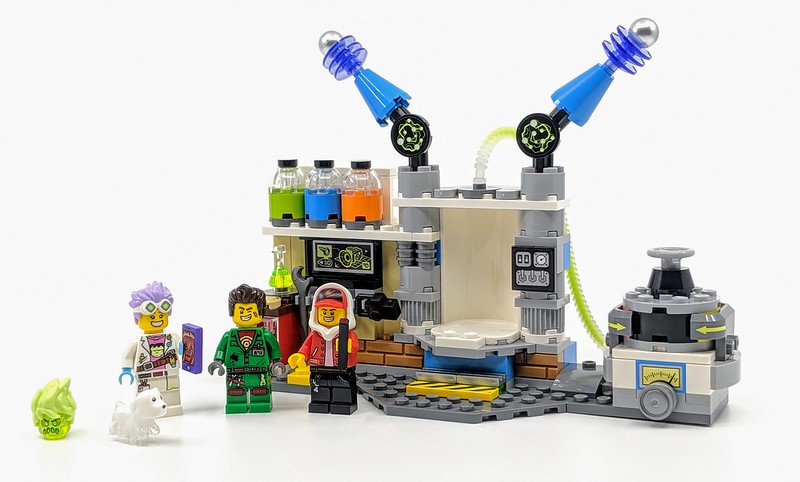 This is the smallest of the retail sets from the first wave of the Hidden Side range. It’s a small lab, in which J.B. researches the spooky going-ons and helps to create new tech for Jack and Parker. Despite the small nature of the set, it has a lot going on in it. There’s all those classic traits of labs in monster movies, like large Tesla-type coils, jars of strange coloured liquids but also a few mod cons like a 3D printer. 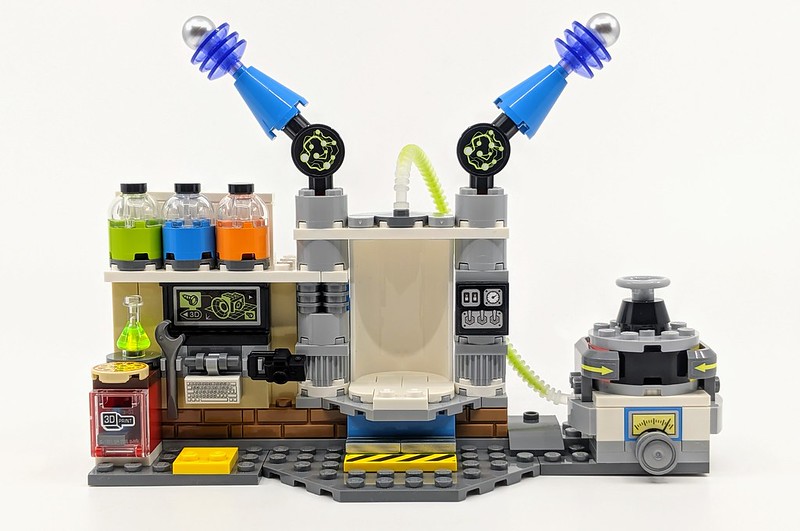 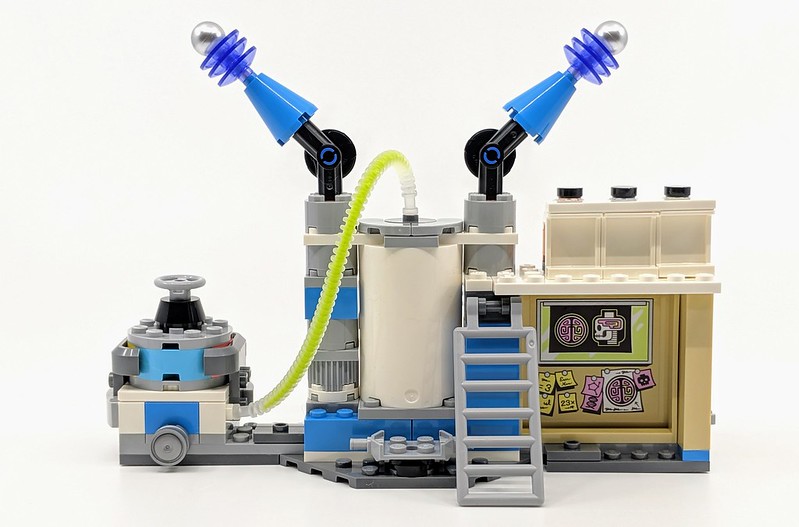 Much of the graphic detail is achieved with stickers, although printed pieces are always better, the stickers used here easily applied. The 3D printer logo and arrows on the colour dial are a little fiddly but do look quite cool once in place. Whilst on the subject of the colour dial, this plays a major part in the AR aspects of the set. It features three blocks of colour – yellow, blue and the funky new coral pink. In-game these colours can be scanned to unleash various points of interest. 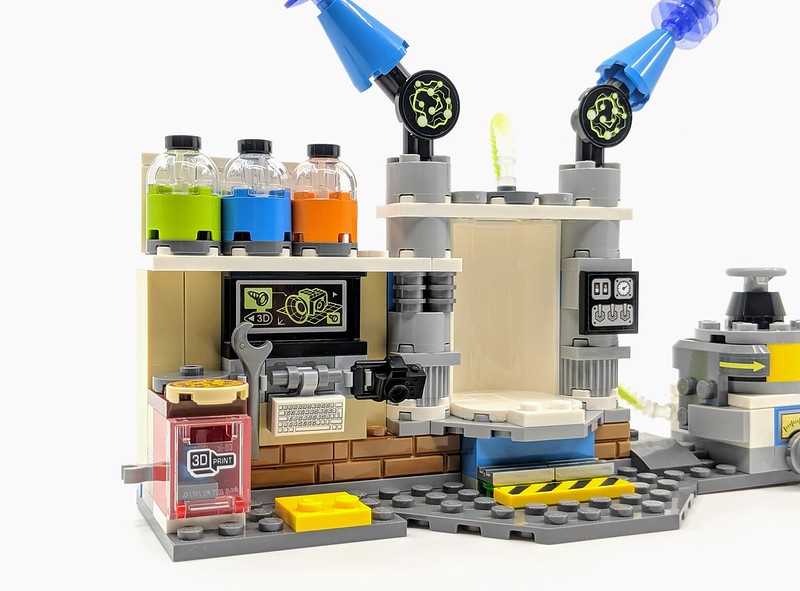 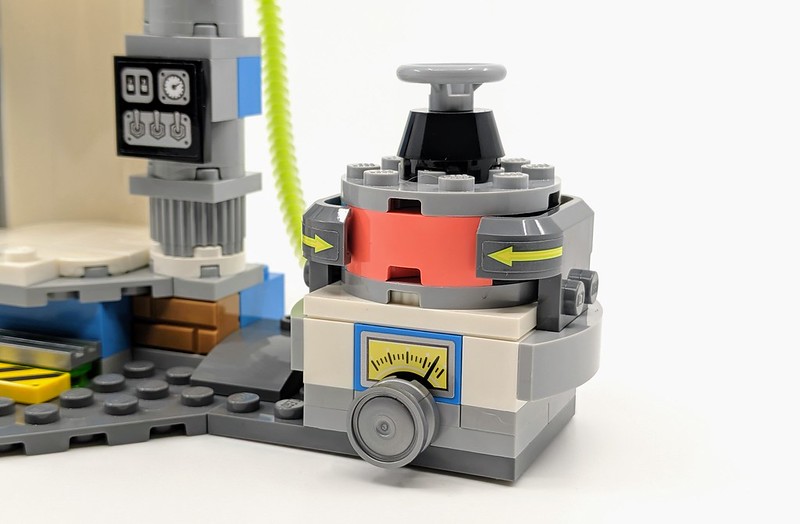 I love the little details dotted around the lab, and the different textured bricks help to give it a lot more character. Even without the AR elements, the set has plenty of play points and looks good should you just wish to display it. Once the Minifigures are added it look even more fun. 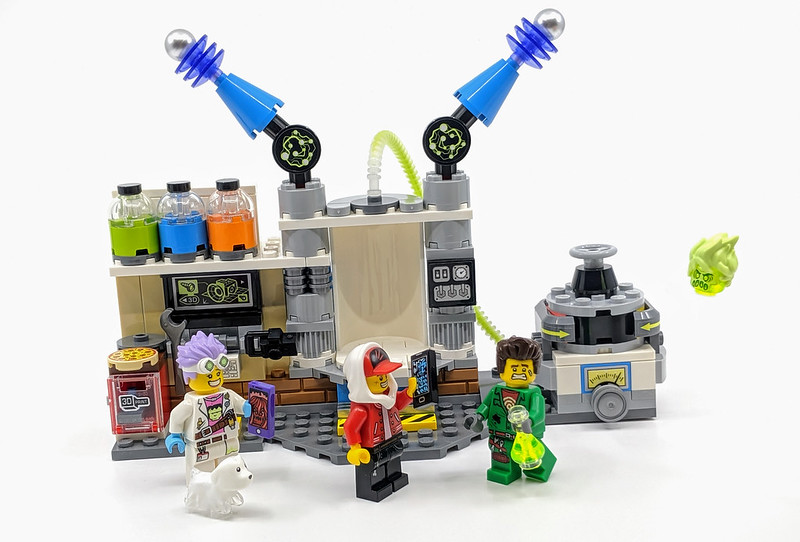 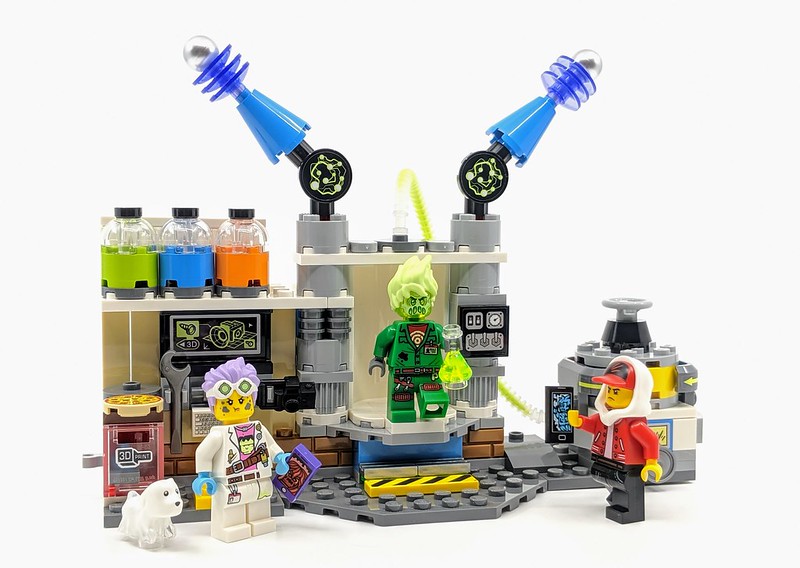 The set contains three Minifigures, one Hidden Side spook and an awesome new ghost dog element. That paranormal pooch is Spencer, one of the few friendly ghosts in Newbury. This new element is a dual-moulded, with both clear and white colouring, helping to give the impression that Spencer is floating. Next up is Douglas Elton, lab janitor and J.B’s hapless assistant. I love the printing on his overall and his two faces. Unfortunately for Doug, he’s the one who has the pleasure of being possessed by the ghostly Hidden Side spook. This merely involves swapping his head and hair for the ghostly versions.

J.B is the mad scientist who helps Parker and Jack to uncover the Hidden Side, she is one of the coolest Minifigures included in the range, thanks to her awesome new hair piece. But she also has a pretty cool outfit as well. Again the print detail is great and I particularly like the mini Frankenstein’ Monster on her shirt. Last up is one of the themes main characters Jack Davids, he also features a new hair accessory, which is a cap covered in a hoodie. Jack’s outfit isn’t a eye-catching as the others in this set, but I like the overall style of the character.

The set on its own is good enough, but you can enhance play with the addition of the LEGO Hidden Side AR app. This brings the set to life by overlaying graphics and animated elements around the physical set. As mentioned above there is a wheel which features different colours, these can be scanned with the app, to unlock collectibles and ghosts. The best way to show these features off is by actually seeing them. So you can get a taster of the AR elements of the set in the video below. In addition to the physical characters, this set also includes a digital one in the form of the ghostly Dr Drewell.

It may not be the most exciting of the Hidden Side sets, but it’s a great taster of the what you can expect from the overall theme. I love the little features packed into such a small set, it may not have the same playability of some of the larger sets in the range; but if you wanted to give the theme go without heavily investing, this is the perfect set. The Minifigures are fun, bursting with character and great print detail. The new elements also help to make the characters feel unique and new. I was a little disappointed with the number of stickers included with the set. Some elements need stickers, but there are plenty of simple elements here, which could have been printed. But maybe if they were, it would be at the cost of a Minifigure. I was pleasantly surprised by the AR elements of the set. It works really well and adds an extra level of fun to the set. I can’t wait to build further sets in the range and see what the future holds for this wonderfully creative new story theme.