When we aren’t being ‘treated’ to various Police and Fire sets, the LEGO® City range offers up something different with sub-themes. In the past, these have seen sets based on construction, mining, ocean exploration and trying to get into space. For 2021 things are a little different, the sub-theme is focused on a particular area instead is focused around the new raid plate system and is collectively known as ‘Connect Your City’. One of the larger sets in this new range is the Family House. With a modern-day, multiple storey home, complete with a driveway made from the new modular road plates. So here’s a closer look at the LEGO City Family House. 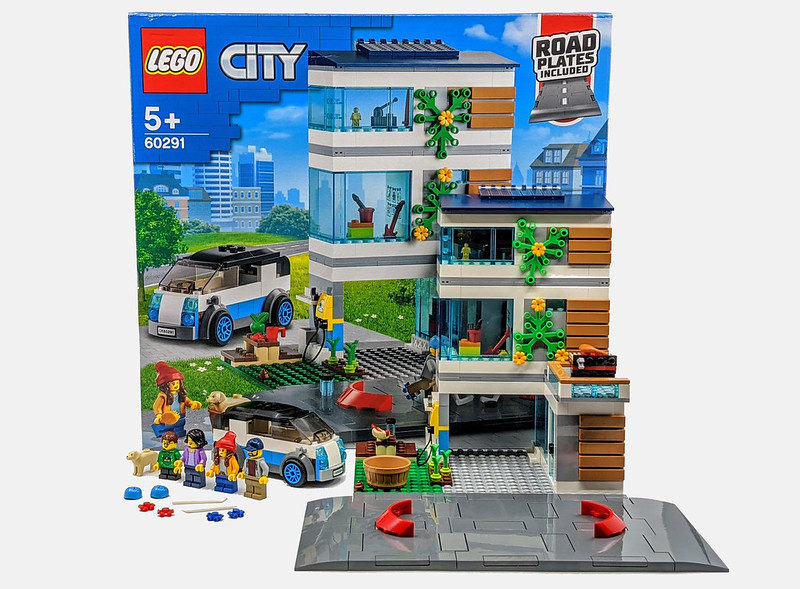 The LEGO® City Family House (60291) has a lounge, kitchen, hobby room, bedroom, bathroom and lots of green-living features, including toy solar panels, charging station and a cool EV. Kids can expand this playset using the included Road Plates to create their own city. And with a family of minifigures, plus a Labrador retriever figure, there’s everything they need for hours of imaginative role play. 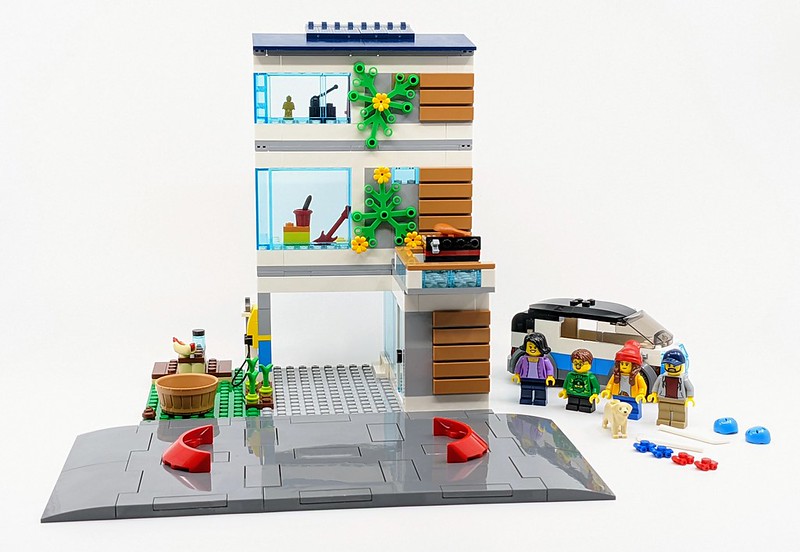 As houses go this is a pretty modern take on one, it’s also very compact. There’s a small garden area, where you’ll find a picnic bench and a tub to wash the dog in, and yes a dog poop or two. The outer area of the house also features an EV charger point, supplied by Octan and a parking area, which partly sits under the house structure. 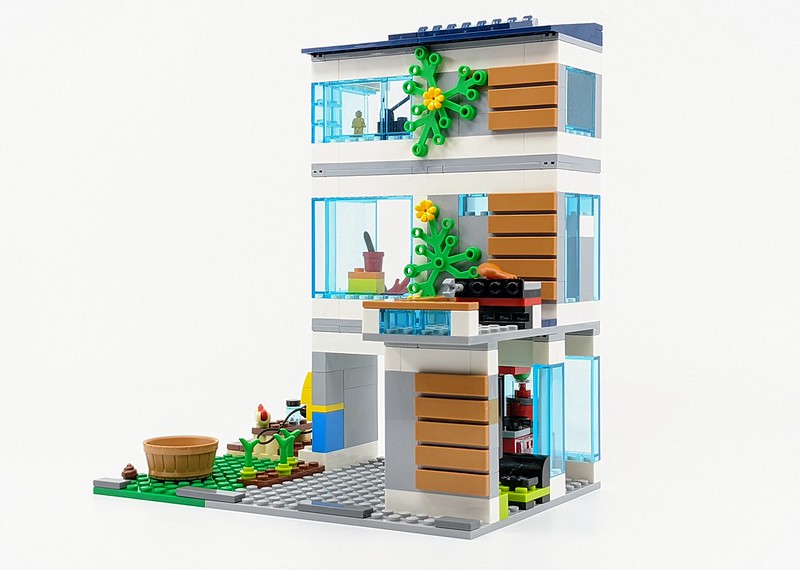 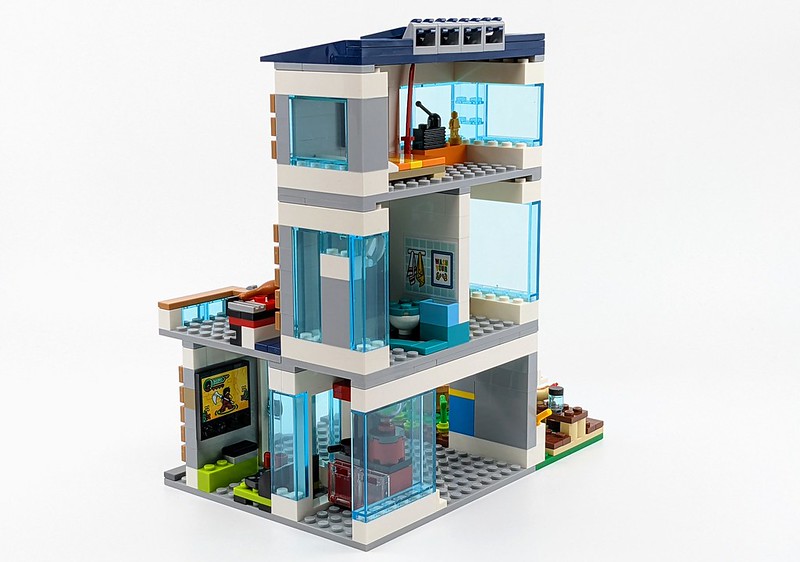 When I say the house is compact I’m not kidding on the ground floor you’ll find an extremely small kitchen, which is home to just an oven and blender. Next door is a slightly bigger sitting room area, with a TV, sofa and games console, which is playing a familiar-looking ninja game. 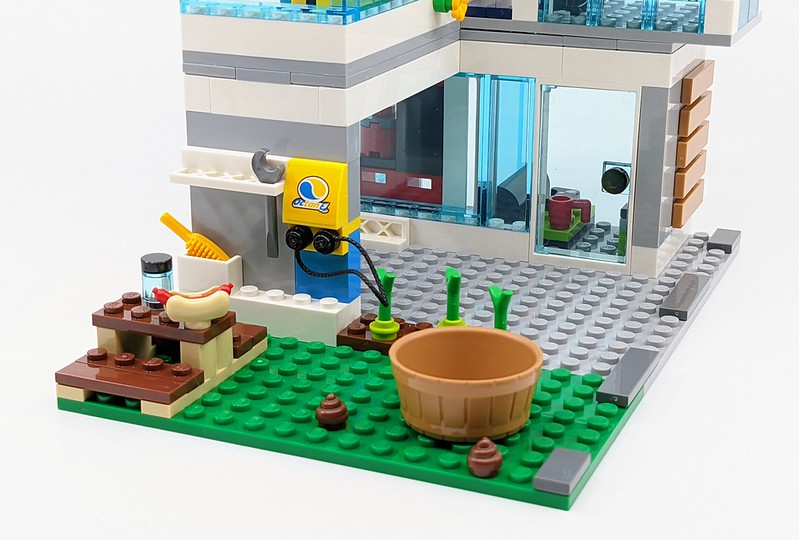 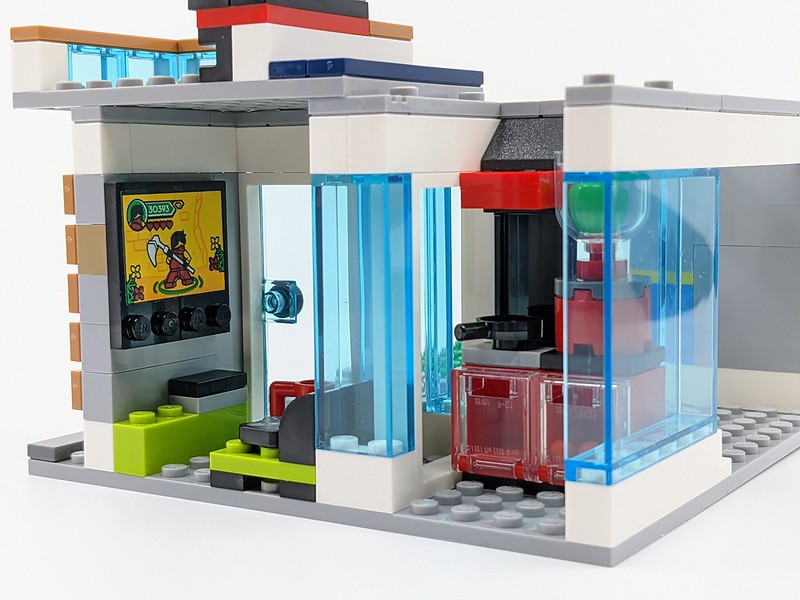 The second floor is a little more spacious with a bathroom on one side, complete with an open shower, loo and sink. I quite like the ‘Wash Your Hands’ sign in the bathroom, very current, just a shame it’s a sticker. The room next door it’s a little odd, I assume it’s a utility room of sorts, as it features a washing machine and for some reason, a guitar along with a paintbrush and bucket, which to be fair is probably just as random as most people’s utility rooms. 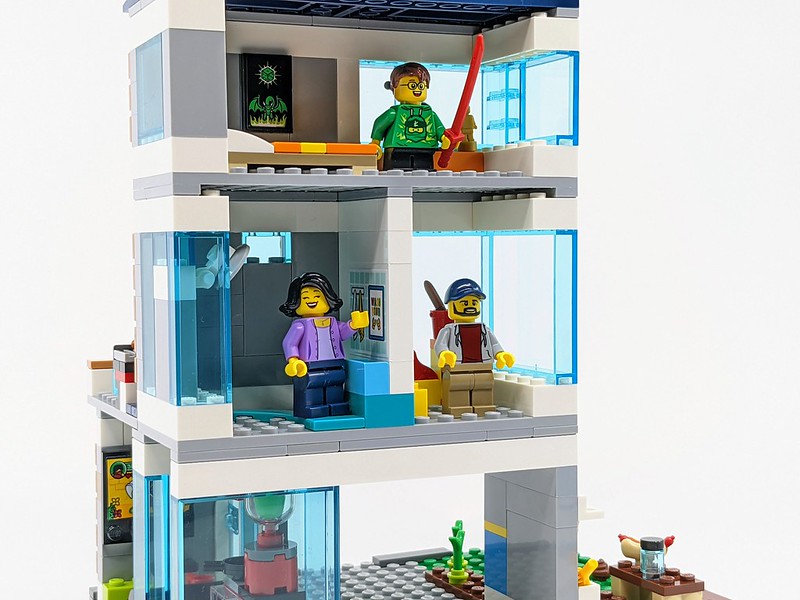 The top floor is a single bedroom, which appears to belong to one of the kids. There’s a red katana on display along with a Minifigure trophy and a poster on the wall. The whole thing is topped with a sloping roof, fitted with solar panels. These use the same panel pieces from the LEGO Ideas ISS set. 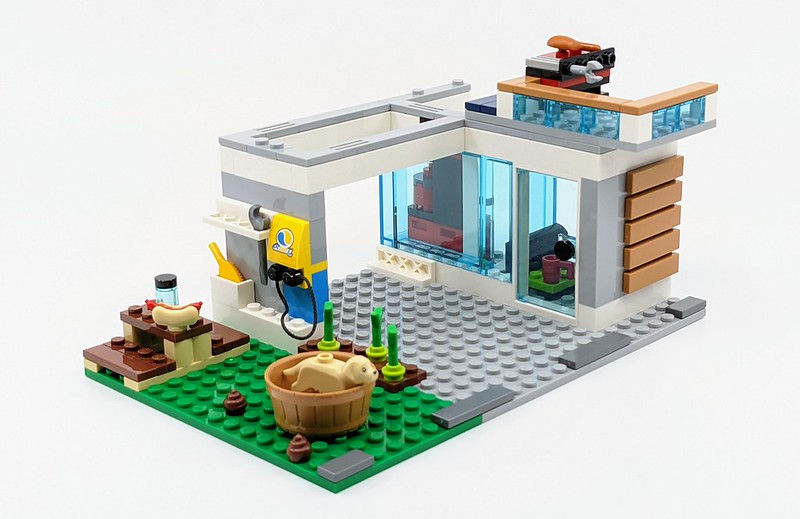 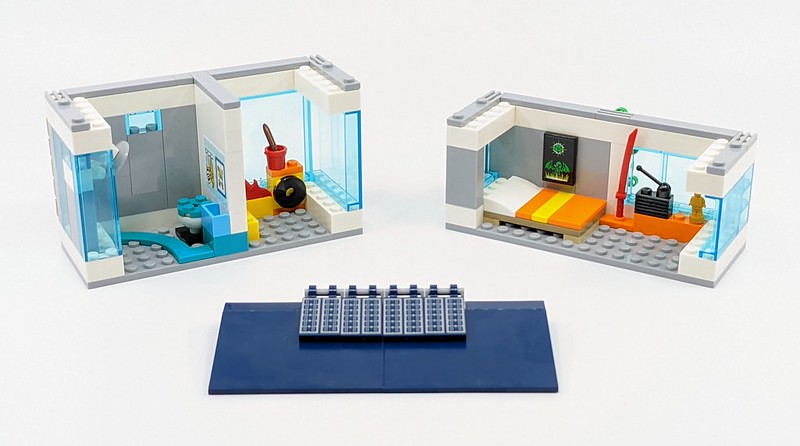 The inside of the house is a little disappointing partly due to its compact nature, but the outside is certainly a lot better looking. Wood panelling cascades across each of the floors along with the climbing leaves of a plant and the large windows almost give it a futuristic feel. The small balcony complete with grill, also adds to the building’s modern appearance. Each of the floors can be removed to better access the inside areas. 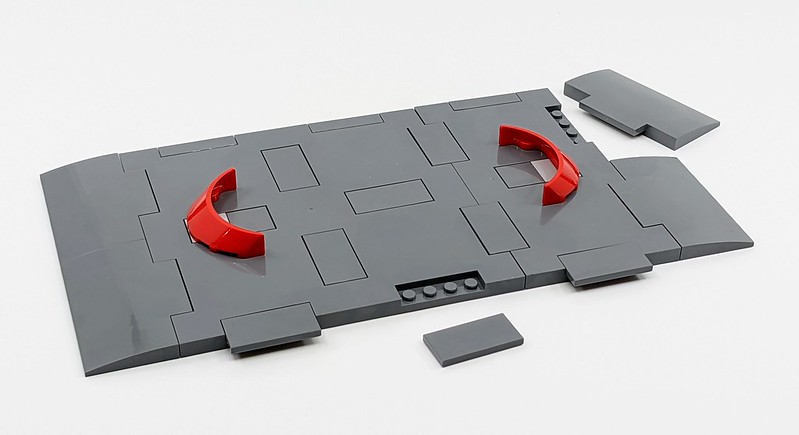 But I think the main aspect of the set is the driveway. This uses the new for 2021 buildable road plate system. This is an interconnected and customisable system, which is assumed to replace the previous baseplate offering. It’s made up of special plates, which are then connected by various tiles. For this set, the area is a driveway, which is also being used as a hockey pitch, so a couple of the flat tiles are switched out for studded plates and a pair of arch elements are used for goals. 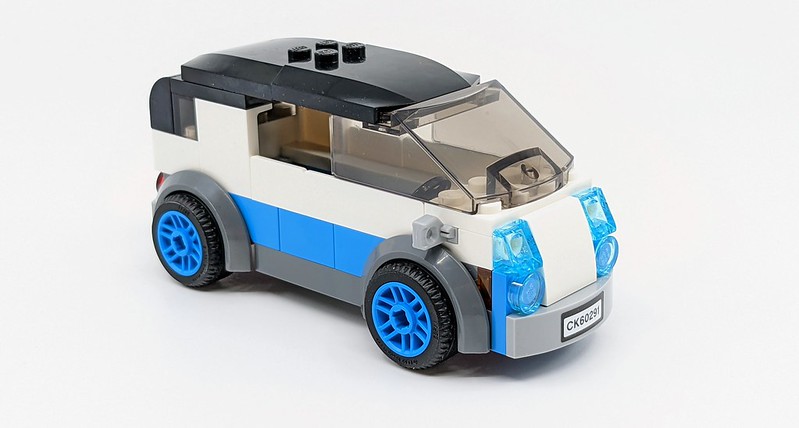 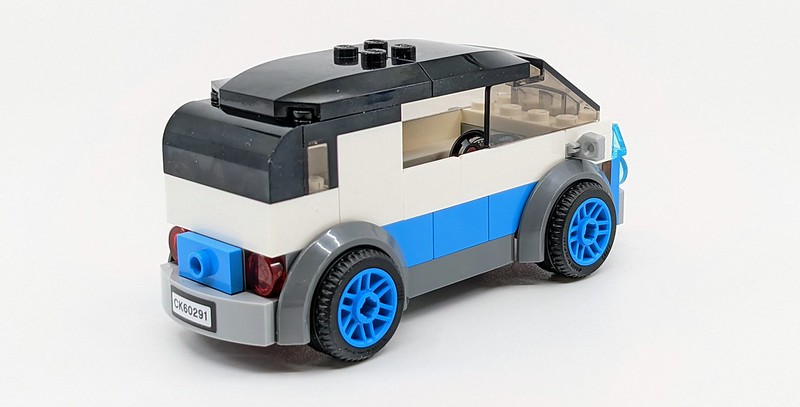 The final part of the set is a very futuristic looking vehicle, which appears to be a people carrier type car. It feels a little too small to be a van, even though the overall shape is similar. It’s also an electric vehicle, which may partly account for the usual look. You can just about squeeze all of the family in the vehicle but it’s very tight.

The set includes four Minifigures, two adults and two kids. These feature a mix of new and rare pieces, which are mainly focused on kids. The girl’s torso is unique to this set and the young boy’s awesome NINJAGO jumper has only appeared in the LEGOLAND exclusive NINJAGO The Ride set. Parker’s hat and hair from the Hidden Side sets also appears in a new colour. The two adults aren’t as exciting in terms of their parts but work nicely with the younger characters and the set overall. 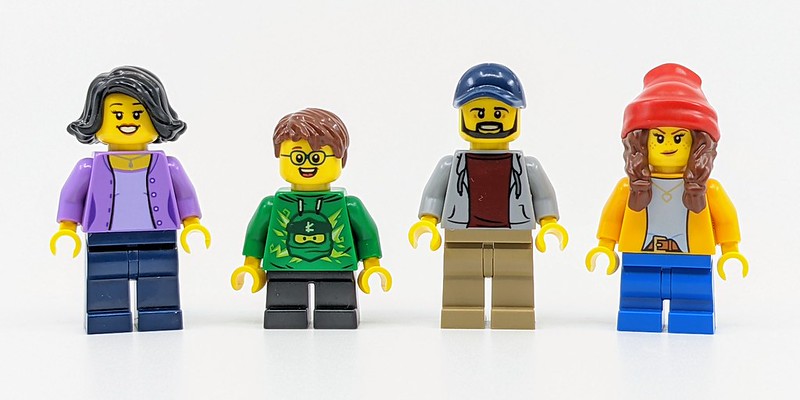 The hairpieces of any of the Minifigures can be swapped out for a helmet and skates can be added, should they wish to partake in a little street hockey.

One of the most exciting aspects of the set has to be the introduction of a new animal mould. This expands the LEGO dog pack with a Labrador-type dog in a tan colour, which is exclusive to this set. 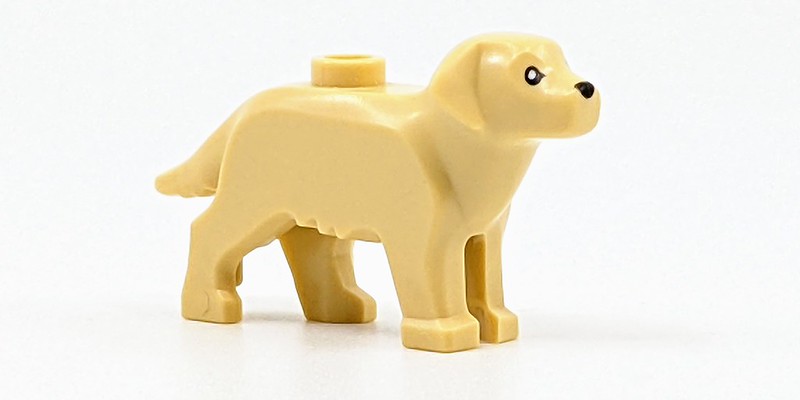 It’s certainly a nice-looking set, it’s just way too compact. It could have been twice the size to really offer up a decent take on a family home. As it stands, the inside of the house has some neat features, the overall scale just restricts them. I really like the outside of the house, it feels very modern and almost like the flash futuristic houses featured in sci-fi shows and movies. The same could also be attributed to the EV vehicle. I think the main focus of the set was to create something to showcase the new road system and to a limited extent, this set does that, but there are others in the sub-theme which certainly do a better job. 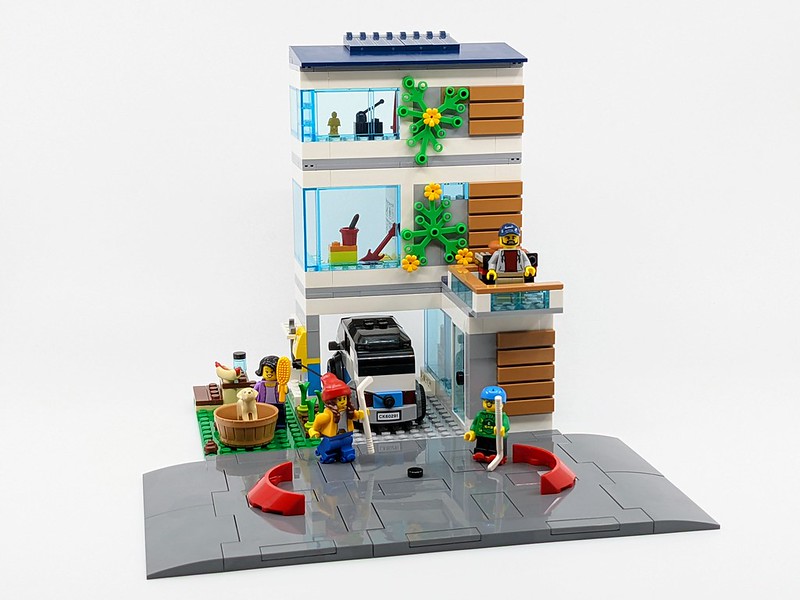