Long before I got lost in a galaxy far, far or enjoyed the interconnected adventures of the MCU, I was obsessed with Disney. The films, the Saturday morning cartoons and of course the music. When I was younger I was the perfect age to witness the golden years of Disney Animation from Lion King to Aladdin. I loved everything about Disney. As I’ve become older my focus on the Magic Kingdom dulled but the magic is still there. I’ve enjoyed Frozen, Wreck-it Ralph and the like. But not enough to drag me to the cinema. Recently something strange has occurred, I’ve become obsessed with Encanto. I watched it the day it hit Disney+ and enjoyed it far more than I expected to, then I couldn’t get the songs out of my head. Now I own the soundtrack on CD, have watched the movie more than once and of course, built the LEGO set. So let’s not dwell on if we should be discussing Bruno and meet the family Madrigal and their magical home. 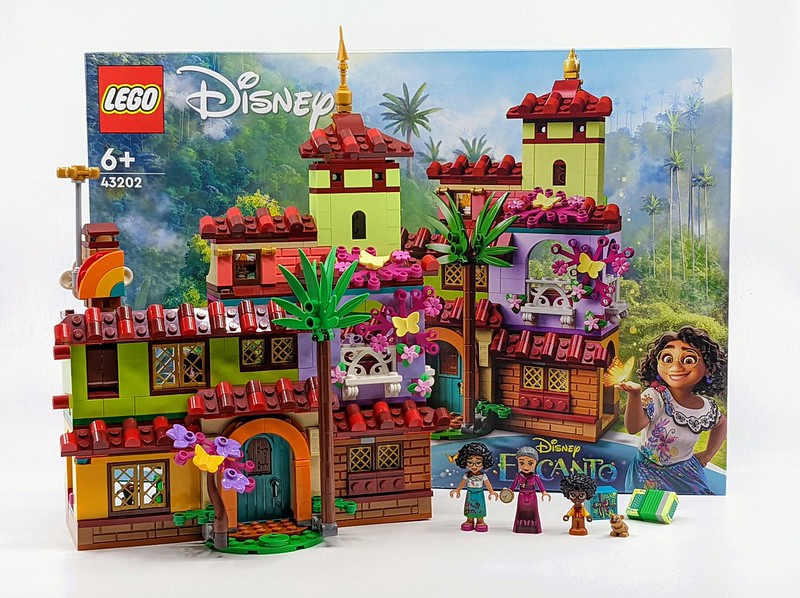 Disney’s Encanto fans of all ages will love this colorful LEGO® ǀ Disney The Madrigal House (43202) set. The kit features a 3-level house, a sticker sheet for decorating it, printed building instructions and digital Instructions PLUS. Using the LEGO Building Instructions app, kids can zoom, rotate and see the model on screen. The guided process lets even youngsters feel like master builders… awesome! 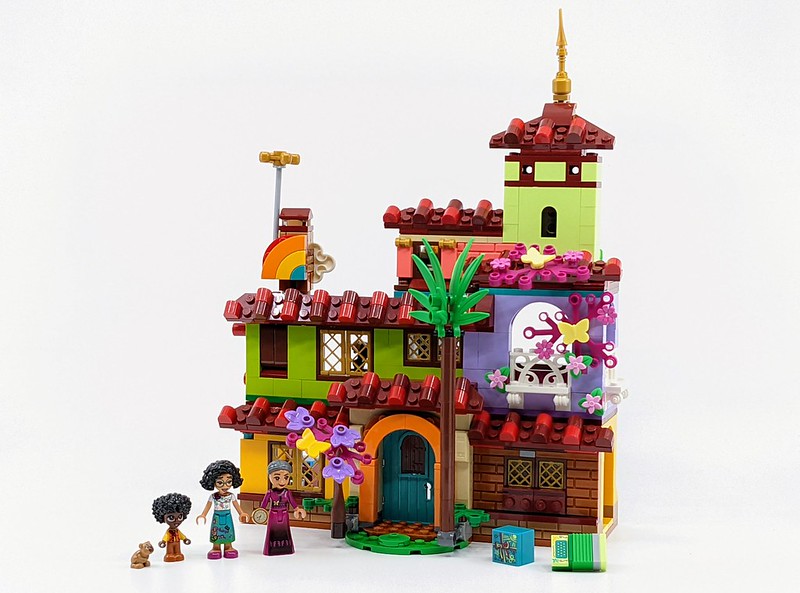 The set is part of the Mini-doll focused Disney theme, which has been home to a number of other Disney film-inspired sets most famously Frozen. The build is split across 5 bags and includes a single sticker sheet. 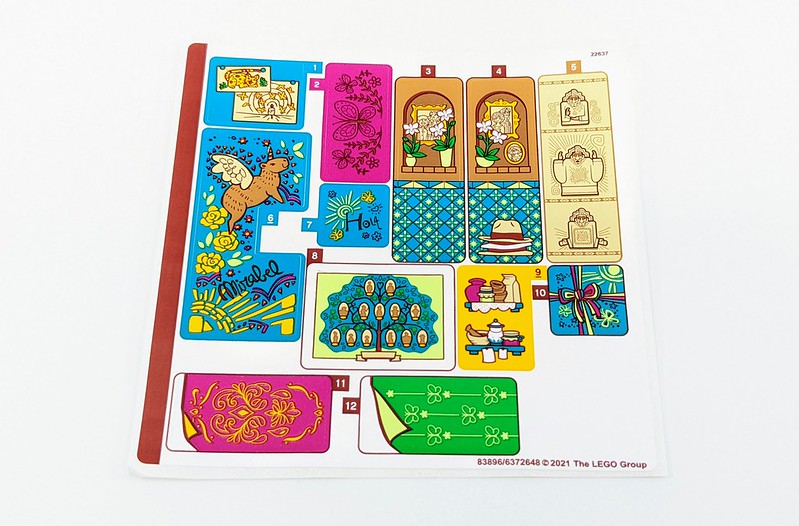 The focus of the set is the magical home of the equally magical family Madrigal. Infused with unexplained powers from an ever-burning candle, the house is alive and home to vast rooms hidden behind magical doors bestowed to each member of the family. Although the set doesn’t even scratch the surface of what the house has to offer, it does capture the exterior view nicely. The various coloured sections combined to create a unique looking house. 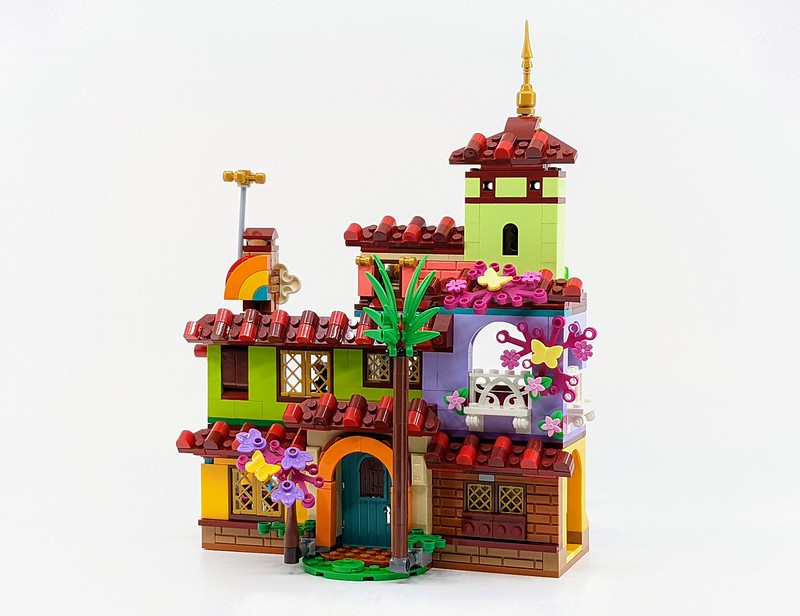 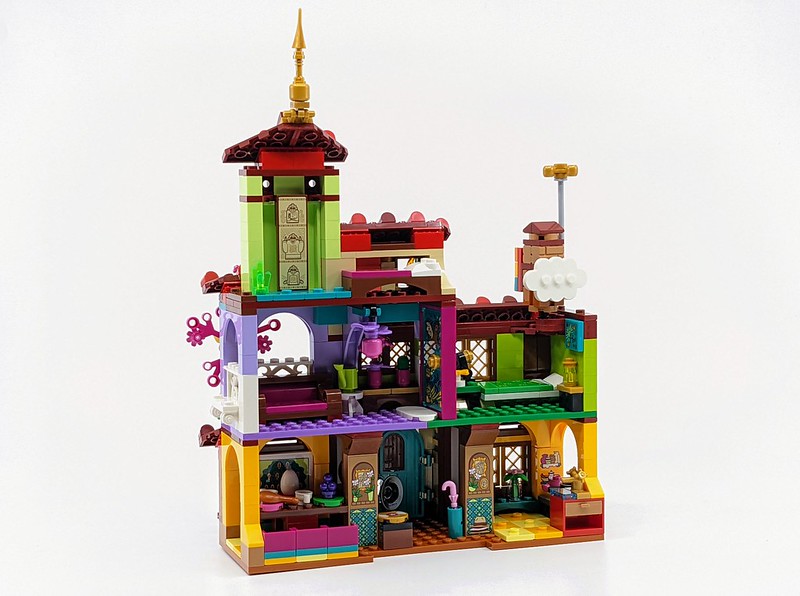 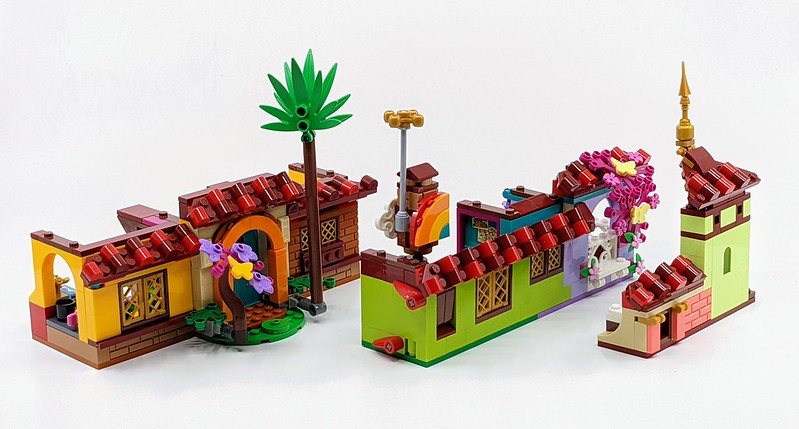 The build begins with the ground floor which features a hallway, kitchen and dining area. The building detail is very basic, but the mix of colourful elements and stickers make it feel more vibrant. In the dining room area, the table can be removed and I like the Madrigal family tree on the wall. Outside the roofs are lined with rows of red and brown ‘loaf tiles’ which nicely match those shown in the film. A very special mention must go to the record player, which expertly uses a Miner’s helmet as a speaker. I do like it when elements are used in clever ways. 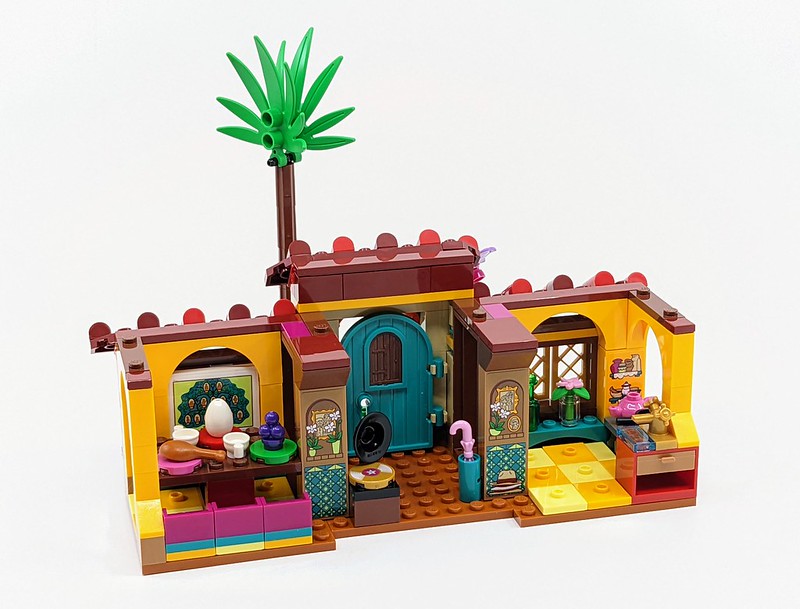 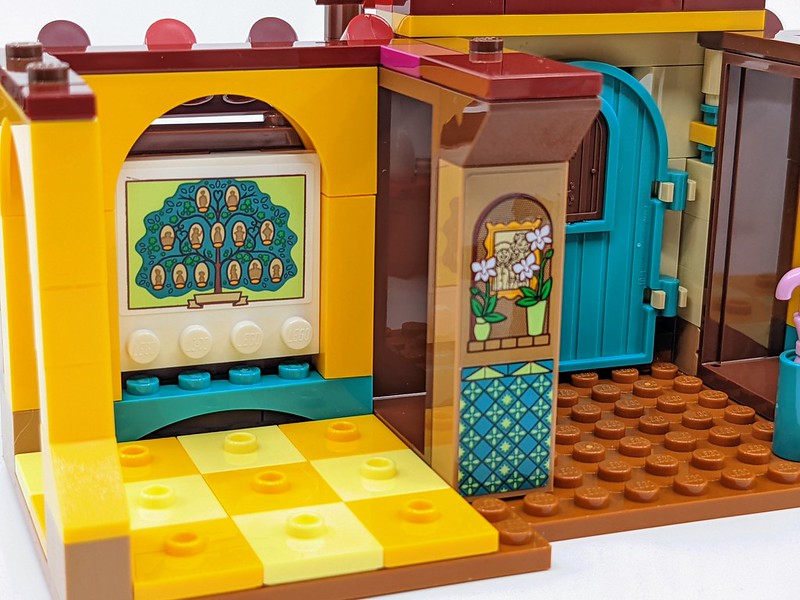 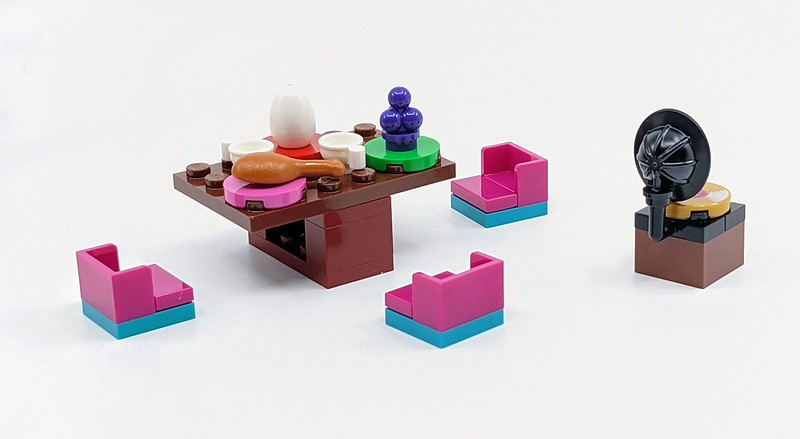 The second floor is a little more detailed and appears to represent Mirabel’s room on one side and Isabela’s on the other. In Mirabel’s room, there is a fun little sewing machine crafted from an Overwatch blaster gun. There’s also a play feature built into the bed. Which can be tipped using a lever on the outside of the house, to get Mirabel out of bed. This is also a clever way to bring a little life to the house. Something also found in a pair of shutters which can also be ‘waved’ using a similar lever piece. 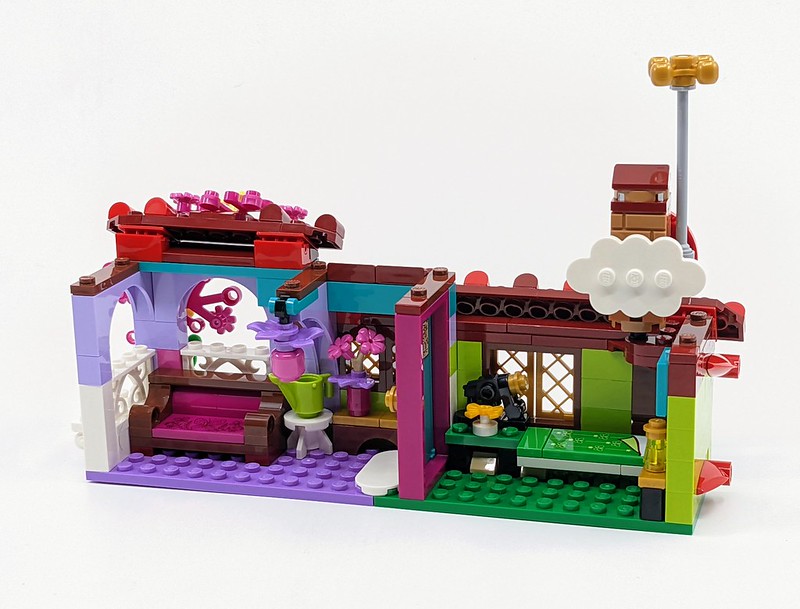 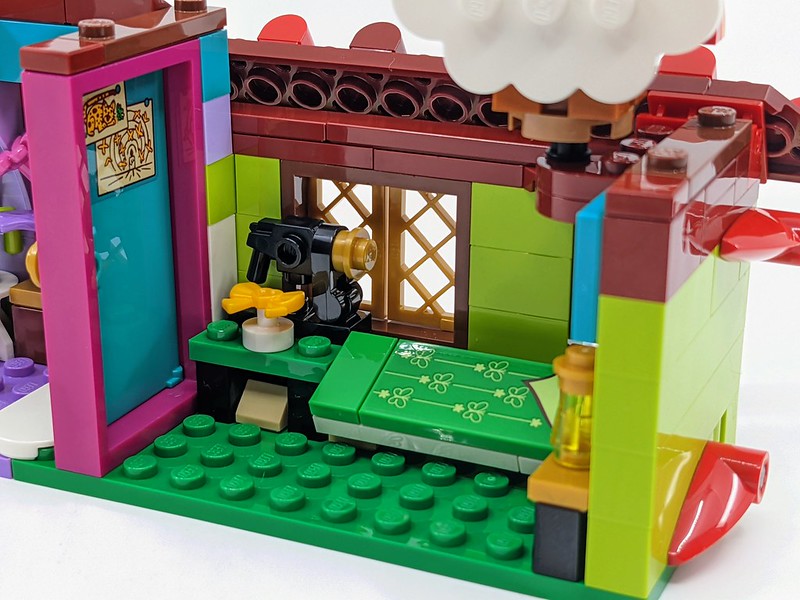 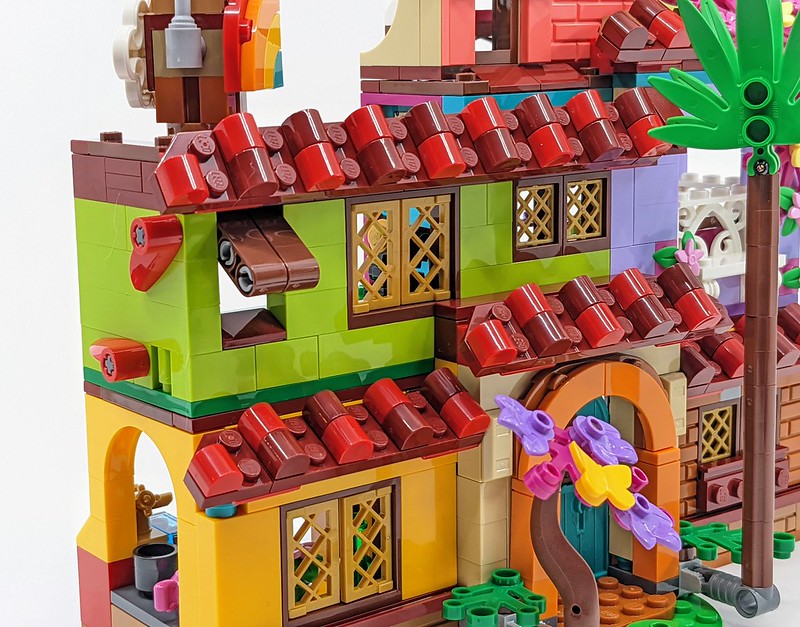 Oddly, despite Isabela not being included in the set, her room is the biggest section of the house. Here you’ll find a sofa and plenty of little flowers and plants. You’ll even find a new watering can element. Although it makes little sense to have such a great focus on a character who isn’t in the set, when you see it from the outside it does make sense. Isabela’s ability to grow blooms in an instant is shown climbing up the outside of the house. Using a mix of dark pink leaf elements, pink flowers and new butterfly elements. This makes the exterior of the house very colourful and cheery. 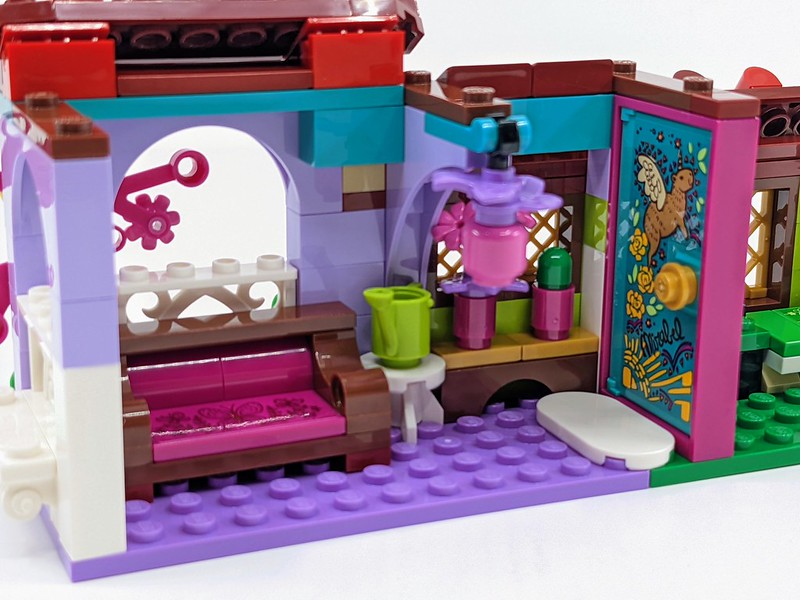 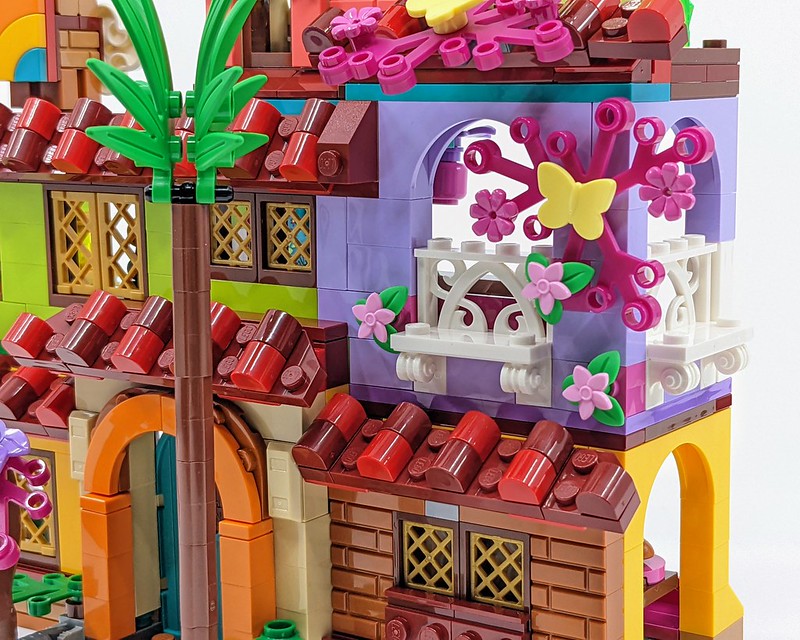 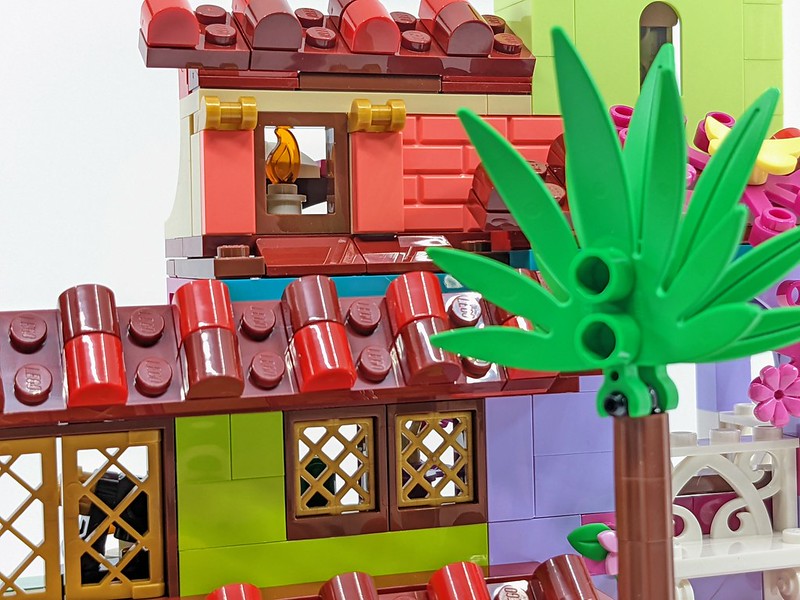 The final section is the smallest, which room I assume is meant to be Bruno’s. Even though we shouldn’t talk about him, the sticker detail on the wall shows Bruno and his green glass represented by a green crystal element. Although the interior is minimal, the outside offers a few fun details connected to other characters from the film. The chimney has the ability to twist around to show either a rain cloud or a rainbow. 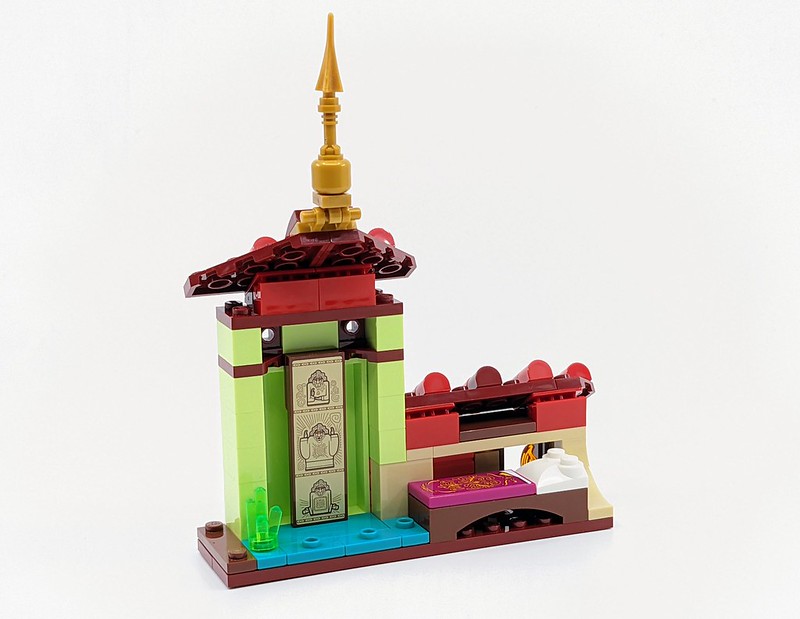 In place of Minifigures, the Disney sets use Mini-dolls like the Friends sets. Only three characters are featured in the set; they include Mirabel, the powerless hero of the film. Her outfit has some great print detail on it, particularly the dress section. She also has a cute little accordion instrument. She’s joined by the Matriarch of the film, Abuela, her outfit isn’t as colourful as Mirabel’s but nicely matches the appearance of the character in the film. Finally, the set also features Antonio, the youngest member of the family Madrigal. He is created using one of the new micro-doll bodies. This works perfectly for the character, especially when paired with his big bushy hair. He’s joined by a capybara, which is created using an animal piece previously used to create a hamster and in all honesty, still looks like a hamster. A tiger cub would have been a better choice or even one of the new toucans. 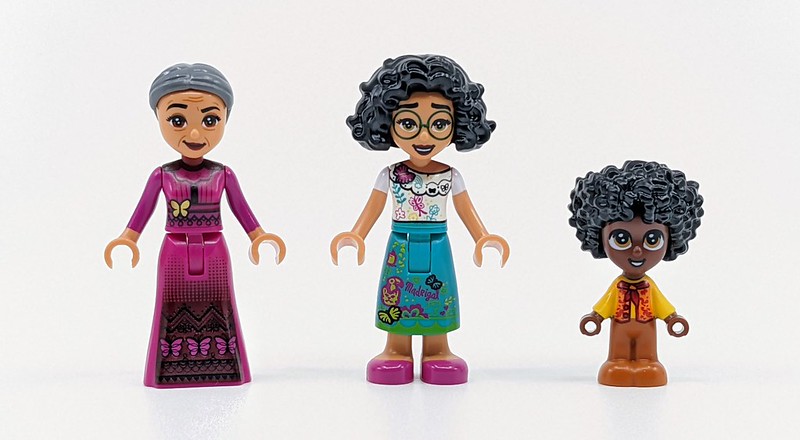 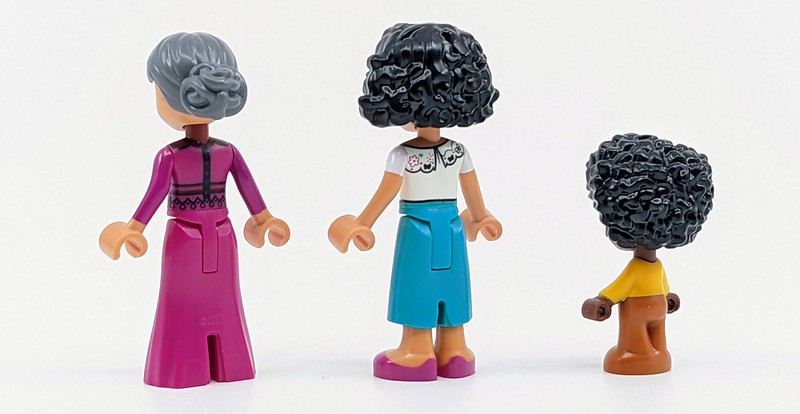 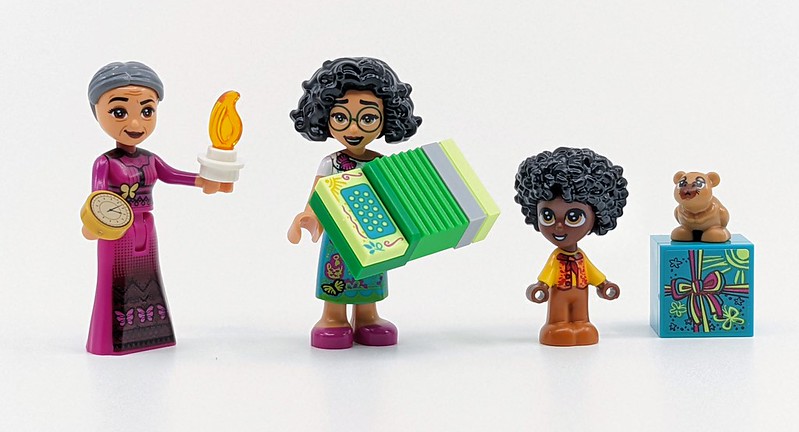 It’s a fun little set, with plenty of connections to the hit movie, something fans of Encanto will enjoy. I would love to see a bigger version in a similar way to how the Ice Palace from Frozen evolved from a small playset to a massive display piece. The greatest shame is the lack of other family members, especially since parts of the house are clearly tied to characters not featured in the set.

A great way to expand upon the magic of the movie. It’s also one of very few pieces of Encanto merchandise. Although it has plenty of neat details connected to moments in the movie the size of the set means it’s vastly lacking.

By clicking on affiliate links within this article, BricksFanz.com may earn a small commission. This in no way influences our opinions or shapes the content we cover</h6