Over the last few years, the LEGO Group has been working closely with an increasing number of well-known automotive brands to recreate iconic vehicles with LEGO® elements. One of the most recent partnerships is with Italian motorcycle manufacturer Ducati. Which has lead to the release of a new LEGO Technic set based on the Ducati Panigale V4 R. This sleek sports bike, the first large scale production V4 engine street bike and one of the most powerful street-legal bikes on the market. But does the latest brand partnership result in a decent Technic build? Let’s find out in my review of the Ducati Panigale V4 R sports bike. 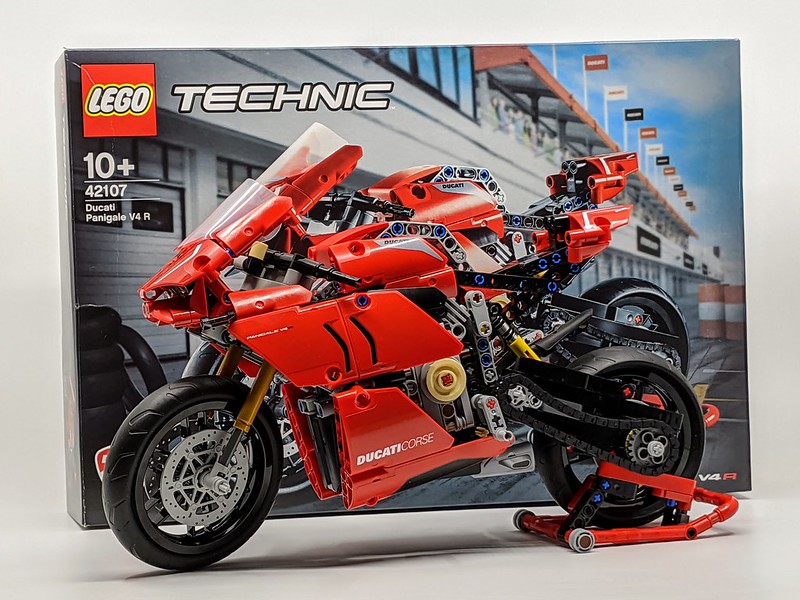 Style, sophistication, performance. With breathtaking looks, this LEGO® Technic™ 42107 Ducati Panigale V4 R captures the spirit and design of the original. It’s the first model motorcycle in LEGO Technic history to include a gearbox for exploring different speeds and techniques. Other amazing features include steering, front and rear suspension for realistic movement, plus front and rear disc brakes.

Amazing details capture the spirit of Ducati
Ducati fans will appreciate the attention-to-detail in this amazing motorcycle replica. A kickstand, exhaust pipe, windshield and dashboard add the little details that make this model toy so true to the full-size version. And of course, the classic red colour scheme is sure to quicken the pulse of any Ducati fan.

Build and learn with LEGO Technic model toys
As part of the LEGO Technic universe, this motorcycle model kit provides an immersive and rewarding building experience. With realistic features, it introduces builders to the world of engineering, as they discover how gear mechanisms work. 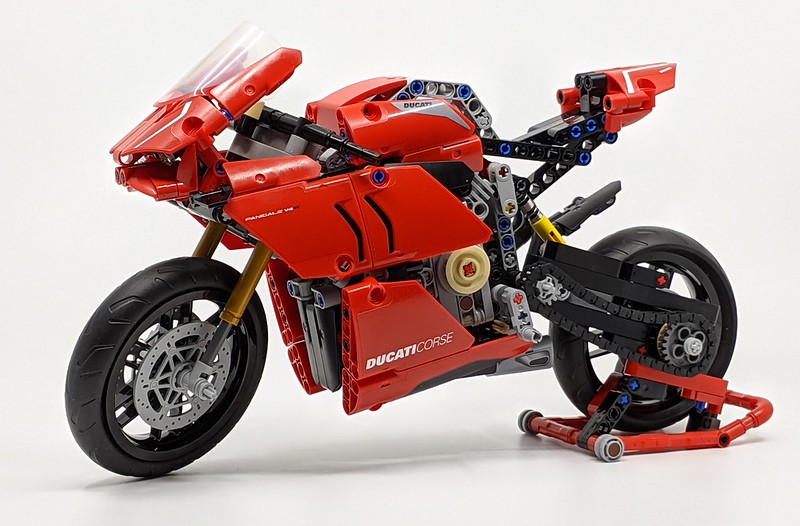 For over 40 years, LEGO Technic has offered a unique build system, which is marketed towards older LEGO builders. Unlike the LEGO System, which is based around the classic studded bricks, the Technic ecosystem is anchored by beams, pins and plates. Since Technic switched element styles in the late 80s, this has allowed Technic builds to become far more detailed. It’s also helped when recreating some of these iconic, real-world vehicles, such as the Ducati Panigale. 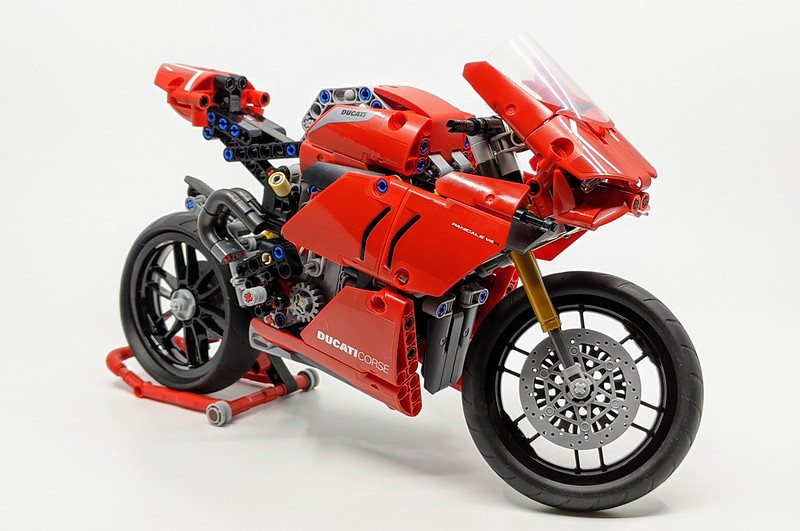 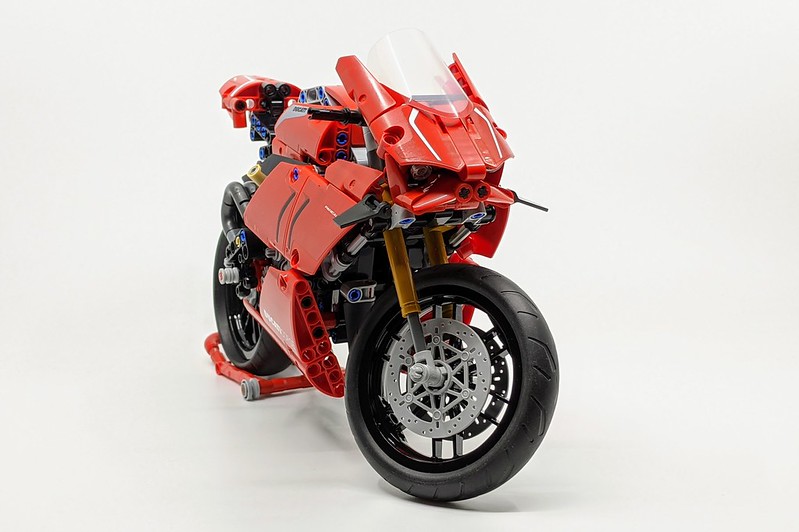 Like any high-end sportbike, the Ducati is a rather curvy beast. Which is nicely captured thanks to a combination of the various sized fin panels. These also act as a canvas for a number of stickers, normally I’m not a fan of these, but they are fairly easy to apply to these panel elements and look quite nice. As much as the outer cladding finishes the look of the set, Technic sets are mainly known for their inner workings. 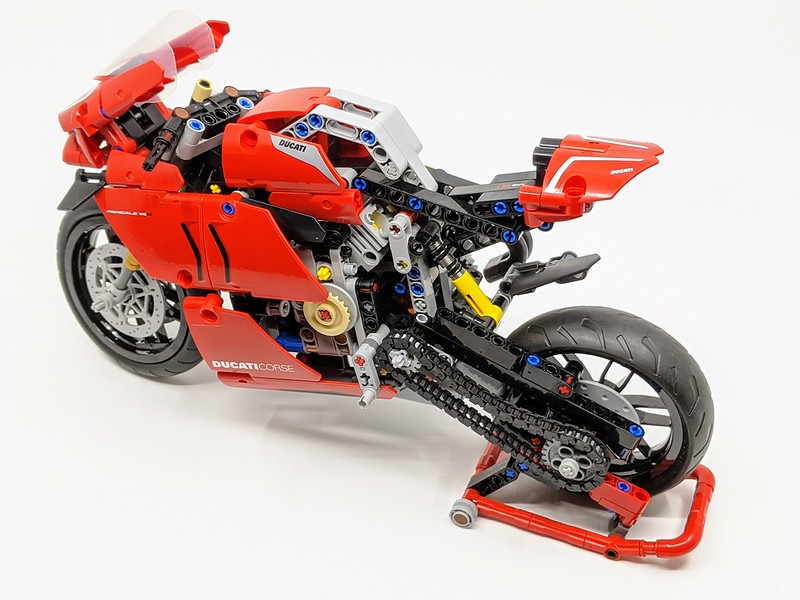 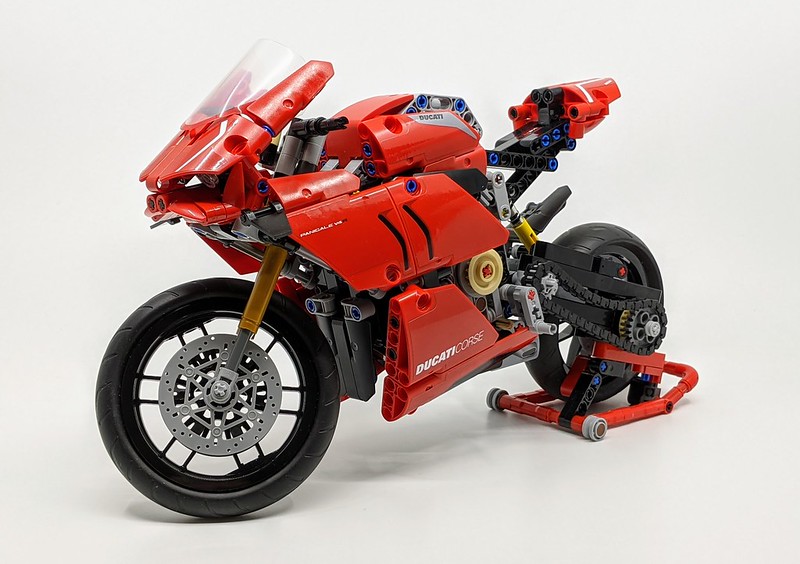 Over the years I’ve built a few Technic sets, which are heavily focused around a working gear system. The Ducati is no different, but thankfully it’s on a much smaller and simpler scale. The Ducati has a 2-speed gearbox and moving pistons within its engine. These are switched by a crank handle on the lefthand side of the bike, which flips the gear system. As with many Technic builds, which include gear systems, they must be aligned correctly in order for the finished model to work. What I found extremely useful when building this section of the set, was a QR code. Scanning this shows off a short video, highlighting how the gearbox should work. This is a welcomed addition to the instructions and I hope it’s something future sets will include. 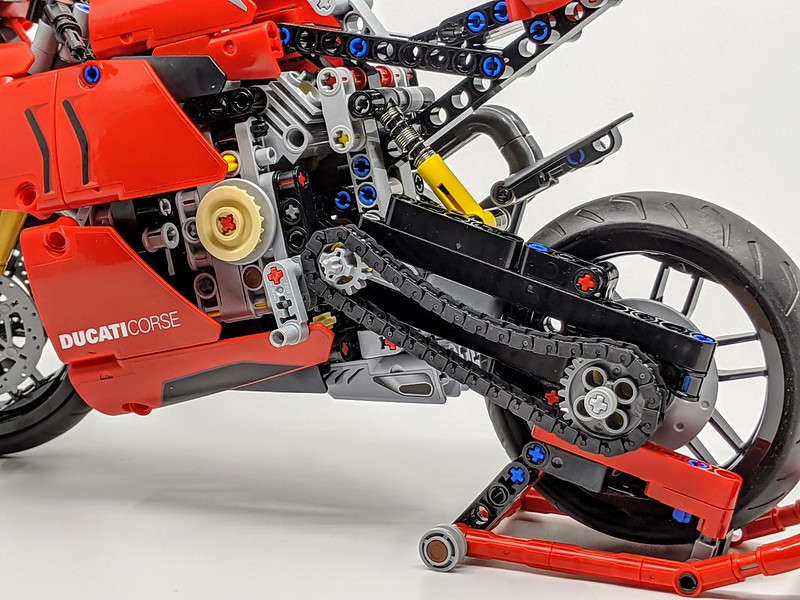 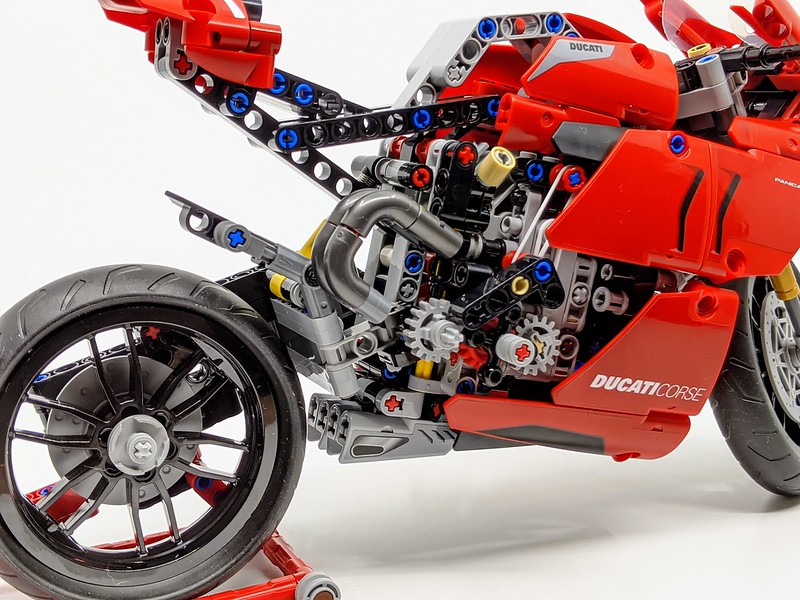 As well as a working gear system, both tyres have working suspension, with the rear wheel mounted on a single shock absorber and the front wheel connected by two gold-coloured shock absorbers, an element only found in this set. The wheels also have unique elements with the tyre rim and brake discs, new for this set. Another unique piece is the windshield, which is crafted from a flexible, printed plastic section. I quite like how this is connected via a couple of NINJAGO katanas. I did wonder how these would factor into the build. The final section you build is a simple wheel mount, this slots into the rear wheel and helps the bike stand freely. Without it, the bike wouldn’t be able to stay upright. I believe the real version includes a similar piece of equipment. 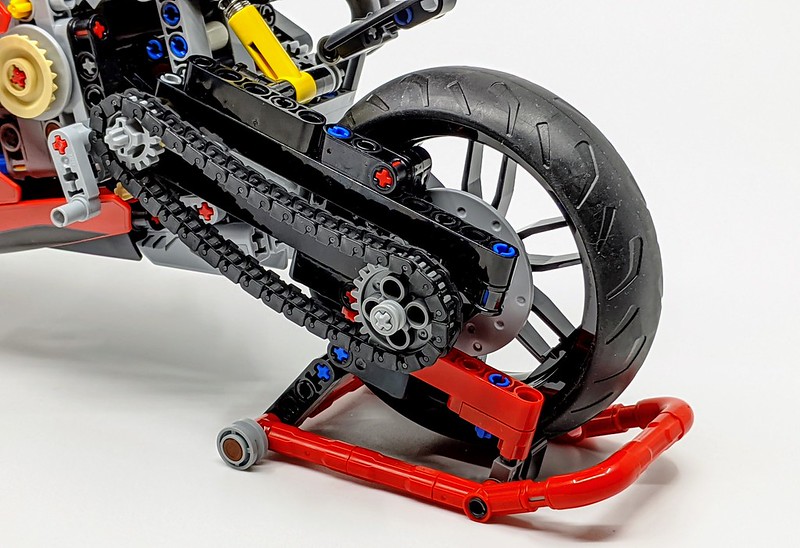 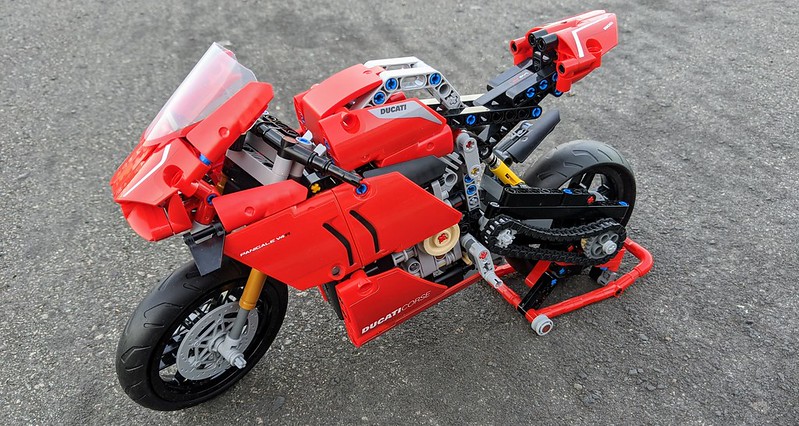 There are very few LEGO Technic sets I buy off my own back and those I’ve had the chance to build in recent years have been due to a review offers from LEGO. I wouldn’t have gone out and purchased this particular set, not because it’s a bad set or looks iffy, but because it didn’t really pip my interest. However, after building it, I must admit I quite enjoyed it, despite the lack of numbered bags and the final model looks quite cool. The gear system is a nice addition and works nicely, but more importantly, it isn’t a nightmare to construct. As mentioned that simple QR code is a helpful step during the build. I think it’s a set which will certainly appeal more to fans of the Ducati brand or motorbikes in general. I also think it’s one of the best Technic bikes to date if you head over to Brickset, Huw has done a handy historic look at Technic bikes over the last 30 years and you can see how the switch to studless elements and curved panels has really helped to give Technic builds a more authentic appearance. The set is available now in the UK, Europe and the Asia Pacific region, but isn’t due to be released in North America until August.

This set was provided to BricksFanz by the LEGO Group for purposes of review. The thoughts within this review are that of BricksFanz and do not reflect those of the LEGO Group. Providing the set for free does not guarantee a favourable opinion of the set. By clicking on affiliate links across this website, BricksFanz.com may earn a small commission. This in no way influences our opinions or shape the content we cover.