One of the first LEGO® Technic I ever owned was the Pneumatic Excavator. Released back in 1992 I would of been just 9 years old. The set used the old Technic build system, but despite the age gap with the set I’m reviewing today, they share some similarities. The set from back in 90s used an interesting method to create movement. Long before Power Functions the set shuns fancy motors and batteries for the power of air. Fast forward to 2018 and the air power is still a thing, except now it’s been upgraded to work in conjunction with Power Functions. But does the Pneumatic System v2 bring anything extra to this new Technic set? Let’s find out. Enjoy a rewarding build and play experience with the LEGO® Technic™ 42080 Forest Machine. This detailed replica of a real-life forest harvester comes with lots of realistic features, including working suspension, articulated steering and a multidirectional harvester head with a spinnable cutter blade. Activate the included LEGO Power Functions motor and engage the advanced pneumatic system to operate the motorized boom and grabber. You can also rotate the driver’s cab to move the boom through more than 180°. This 2-in-1 advanced building set comes with 2 buildable tree trunks and rebuilds into a rugged Log Loader. 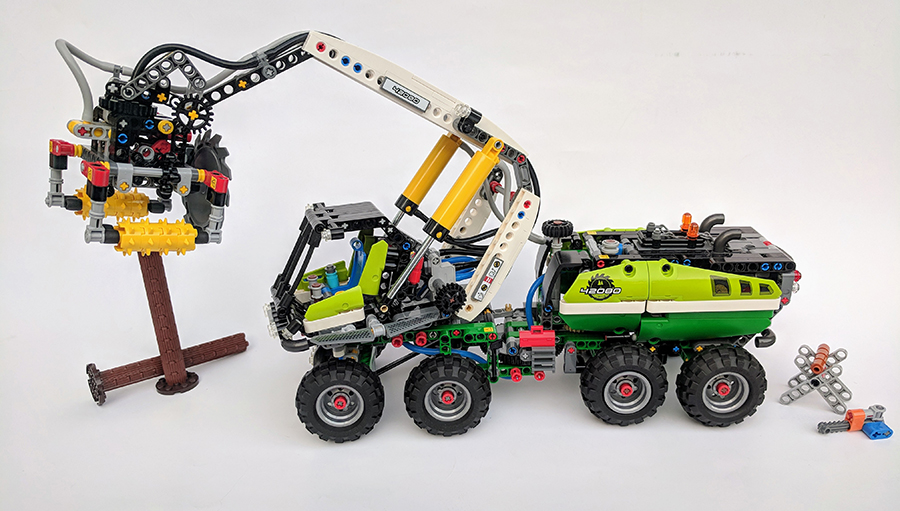 The Forest Machine is an interesting looking vehicle, with an appearance similar to the John Deere manufactured forest harvesting machines. The actual build has three clear sections – the rear, the front cab and the boom arm. Unlike most Technic sets, which often begin with a complex chassis base, due to how the Forest Machine built and connected together, much of tricky technical inners are a little easier to tackle. 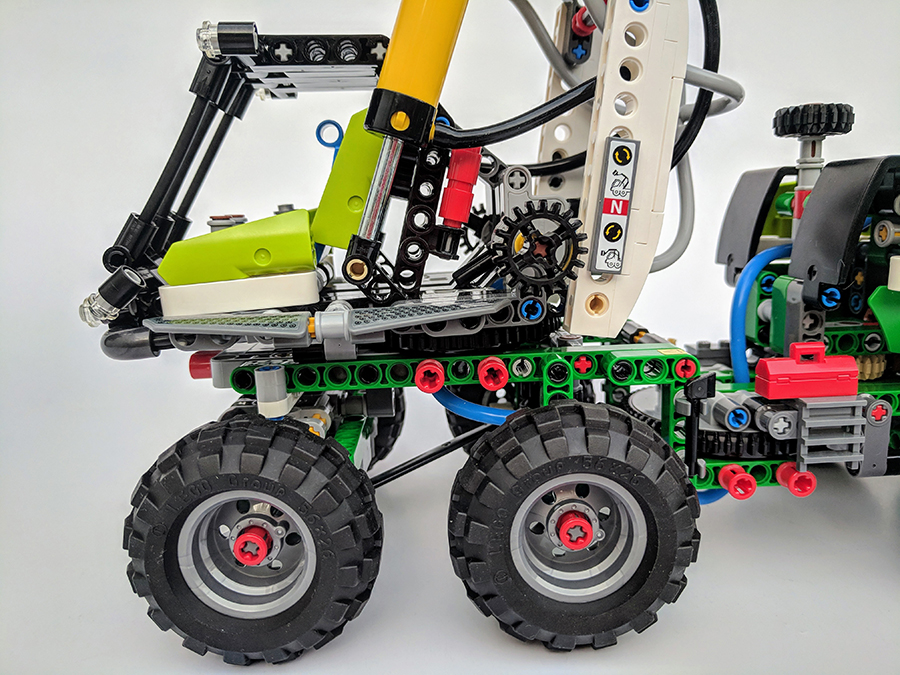 The build begins with the cab section of the Forest Machine. Although it looks simple enough, it houses part of the unique air and power system which brings movement to the set. The cab contains two actuator air switches. For these to work they are kitted out with a series of air tubes, which connect to the rear section of the set. Although the tubes can be a little tight to get onto the valve connectors, this is necessary for the air system to work correctly. But they can be a little fiddly. The next part of the build focuses on the base of the vehicle and the rear section. This may look a little complex but it’s in fact the easiest section of the build. Much of the technical stuff aspect of the build in focused in the cab and boom arm, so the chassis is fairly simple in terms of part use and building. The midsection is centred on a larger turntable element, with the same element used to connect the operators cab to the rest of the build. This section also helps to conceal and keep the air tubes neat and tidy. The rear section is made up of a number of plate elements, which surround the battery box. These are jazzed up with a few stickers, including a cool little buzzsaw logo. The top of this section is hinged, so you can easily access the battery box. A small grey hub element is mounted on a rod, pushing this forward ‘unclips’ it to allow the panel to be raised. You’ll also notice a little chain mounted here, this is to carry the brick-built logs. Unfortunately the logs are a little frail, although they have a couple of rod elements running through parts of them, they still come apart really easily. But this also works to the sets advantage, although the blade on the grabber doesn’t have powered movement, it can still be spun around. If you get the log positioned just right you can ‘slice’ it in two. 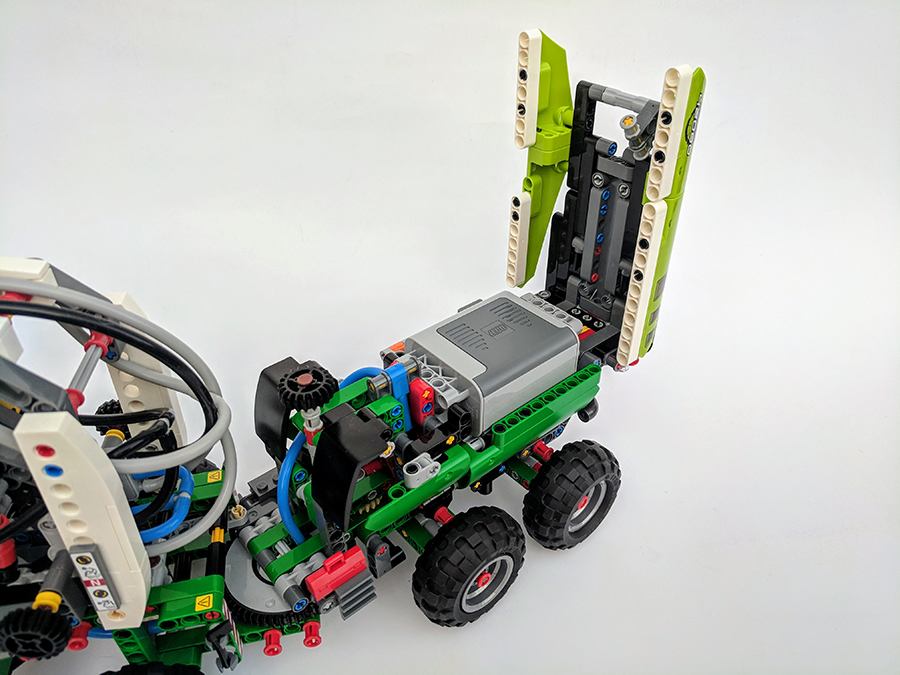 I like that the battery box is easy to access as well as being concealed within the rear section. As you can see below a combination of LEGO elements and Technic pieces are used to finish this off nicely. I also like all the pipes and lights, dotted around this section. This adds some nice visual detail and are complimented by the little sticker details. 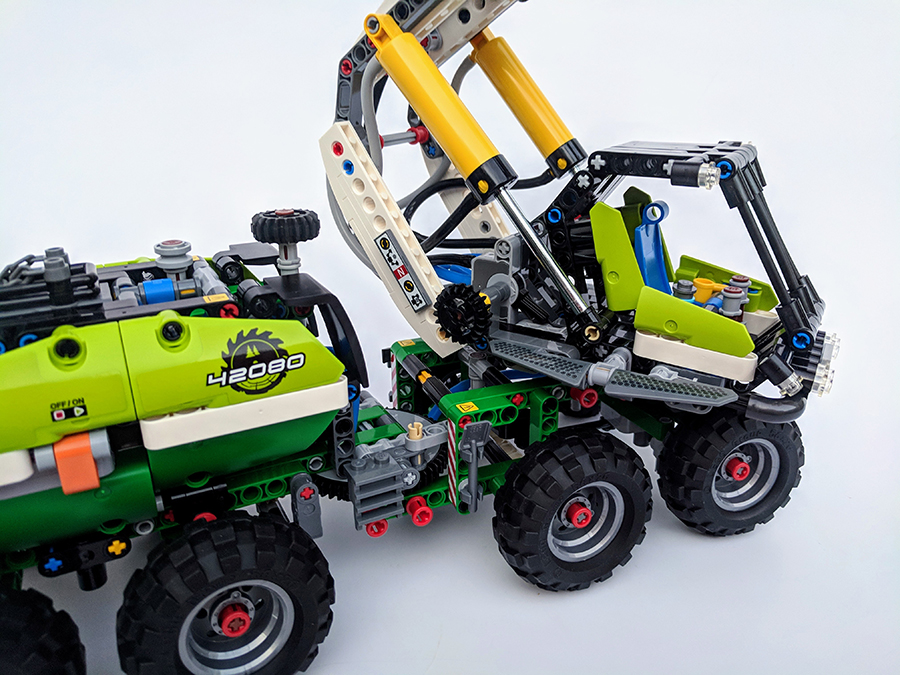 It might not look like it but the most intricate part of the entire build is the boom arm. This features a buzzsaw and a couple of grabber grinders. As well as being able be opened and closed with the Power Functions, this section can also be rotated and can also be angled in two different ways. The actual arms of the boom are connected to the main body of the Forest Machine, by a couple of pneumatic cylinders and Technic beam elements, with the air tubes running along them. 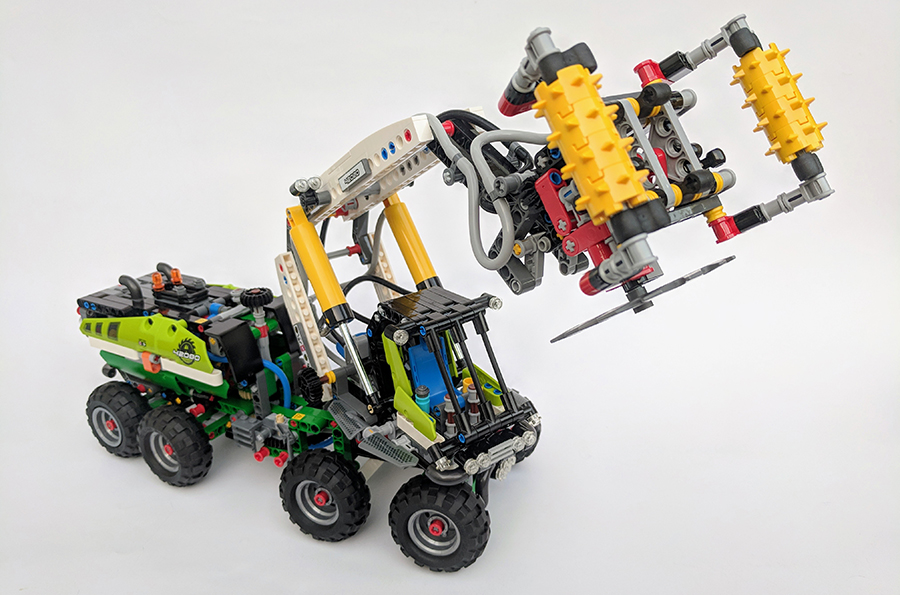 The set uses not only Power Functions but also the little known Pneumatic System. Power Functions have been widely used in a number of LEGO and Technic sets, and include power boxes and motors. The Pneumatic System uses various tubes and pumps but both provide movement functionality to the Forest Machine. The Power Function battery is used to power a number of pneumatic cylinders, which are connected to a couple of switch pumps. These provide movement to the Forest Machine’s extending boom arm and grabber blade. Once the power is switched on, you can then activate the flow of air by using a couple of gear dials at the rear of the front cab. Pumping the air or releasing it will make the boom arm rise or lower.

With the other on the opposite side, making the mean looking gabber open and close. It’s a shame there isn’t any spinning movement on those yellow teeth columns, or that is there isn’t remote controlled movement for the entire set. But it’s still a fun little feature, which harks back to the past Technic sets.

As well as these powered functions, the Forest Machine also features a gear dial along the top of the rear section, which offers a limited steer function. The entire cab can be twisted around 180° and the most of the wheels have suspension. Plus the gabber on the boom arm, can be angled into two different positions thanks to another gear dial. 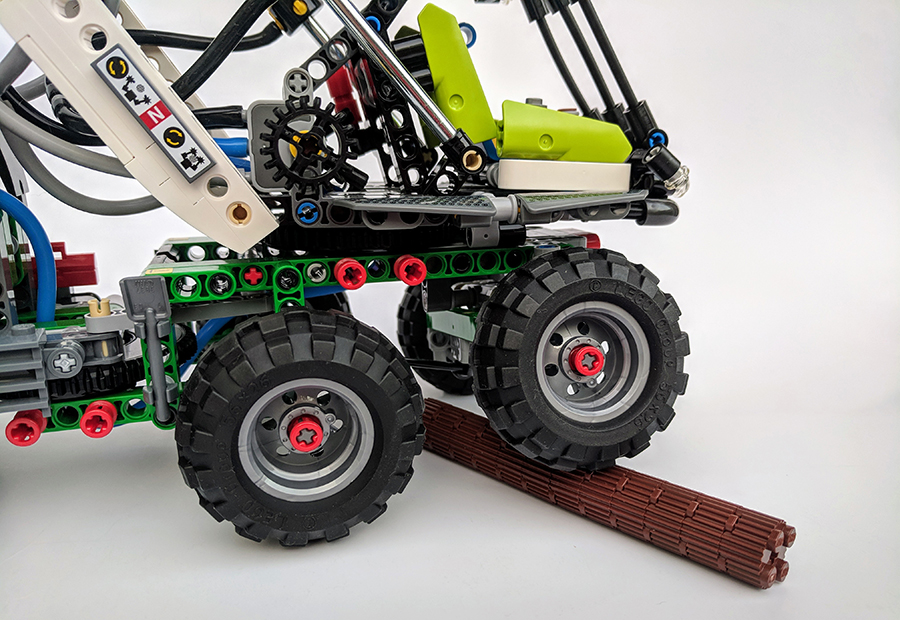 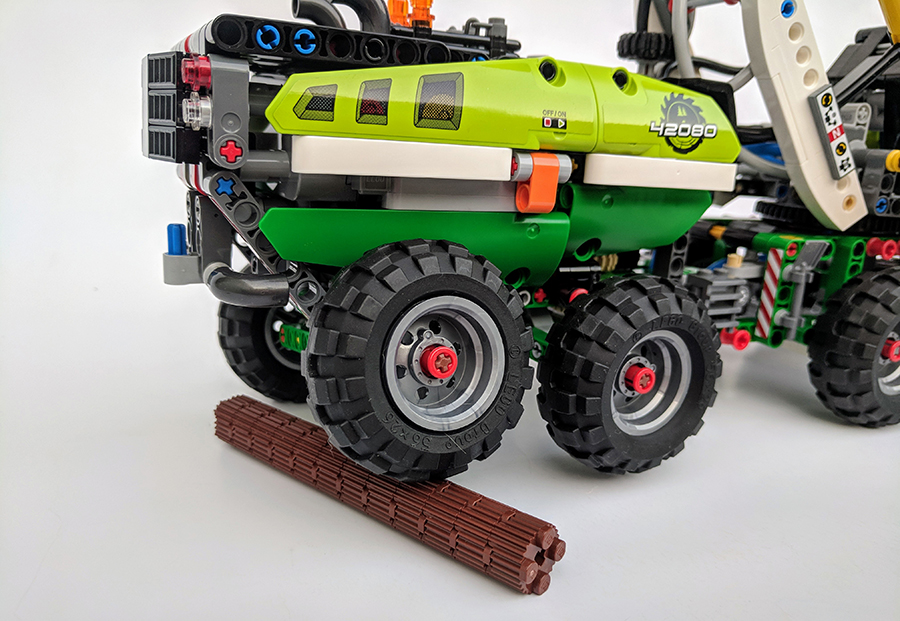 The Forest Machine is an interesting set, the combination of the pneumatics and Power Functions is fun but also seems a little bit of overkill for what it actually powers. That being said there aren’t that many sets which make use of the Pneumatic System, which makes it rather unique set. Technic sets are a mini marvel of engineering, especially those with additional powered functions, so having a system which also uses air to provide movement is definitely worth experiencing. The small additional bits such has the two logs and chopping stand are a little pointless, especially with the tree stumps being so delicate and easily breakable, although that does mean you can actually cut the log, well in a fashion. All in all its a fun set to build, with a unique power system to experience. The Forest Machine can also be rebuilt into an additional B-model, the Log Loader. Instructions for this model can be found here.