This year marks the 10th anniversary of LEGO® Friends and it’s a theme which shows no signs of slowing down. The latest wave of sets features some particularly interesting builds and also continues to expand the residents of Heartlake City, with new characters and a greater balance between gendered mini-dolls. I must admit I don’t build that many of the Friends sets, although I have do not dislike of mini-dolls, I do prefer minifigures more. This does influence my building choices, but the set I’m taking a look at in this review, really caught my eye, so here’s a look at the LEGO Friends Roller Disco Arcade set. 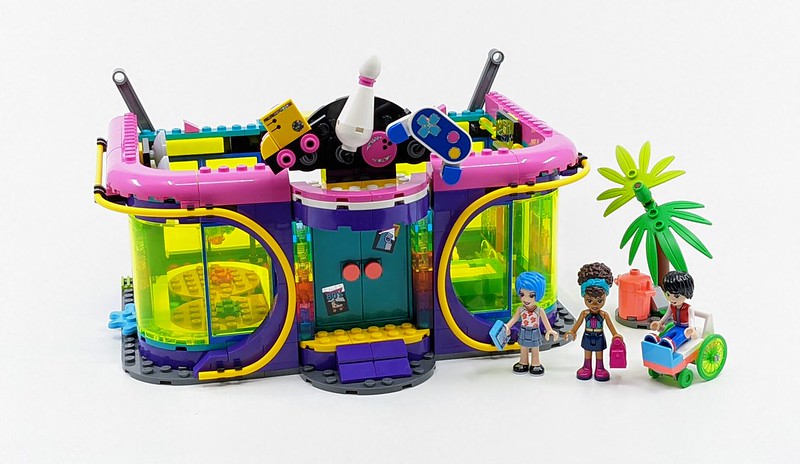 Give LEGO® Friends fans aged 7 and up hours of fun play with the cool Roller Disco Arcade (41708) toy. The model opens to reveal 3 fun activity zones. Kids help LEGO Friends Andrea put on her skates and hang out with friends at the roller disco. Characters can also go bowling or play arcade games. With 3 LEGO Friends characters and lots of cool toy accessories, there are limitless possibilities for creative friendship storytelling.

Packed with fun features
The mini-dolls ‘skate’ when kids turn the gear wheel. Kids can also play DJ – the model has a stand for a cell phone so youngsters can choose the music for the disco. As well as a paper guide, this set comes with Instructions PLUS. Available on the LEGO Building Instructions app, it includes zoom, ghost and rotate tools to help children understand the building process. It also lets them save their progress so they can jump back into the build anytime. 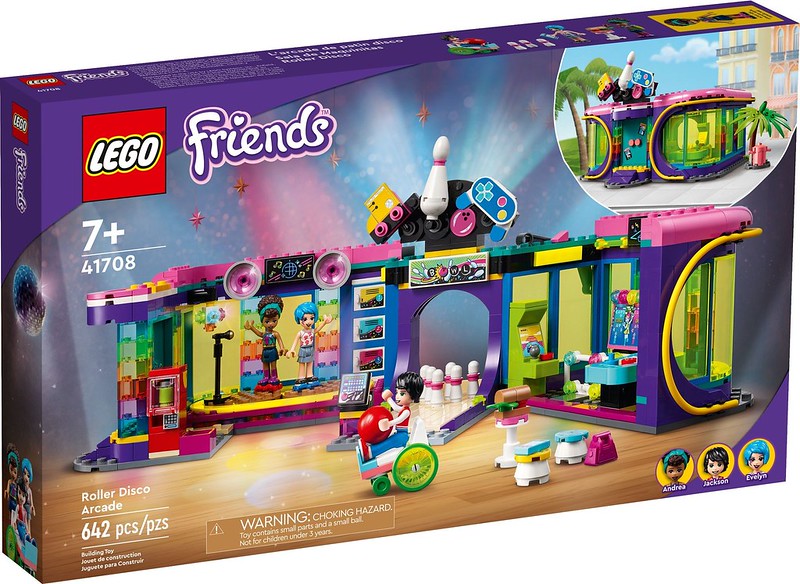 The humble arcade was a popular hangout joint in the 80s and it’s that colourful era which has inspired this new LEGO Friends set. The connection to the 1980s is heavily implied by the excellent stickers featured in the set. There’s a single sheet, but unlike most LEGO sets, it comes on a shiny, glittery background. This adds to the set’s already colourful palette. The stickers are used to add detail to various parts of the set including the arcade machines, scoreboards and other signage. 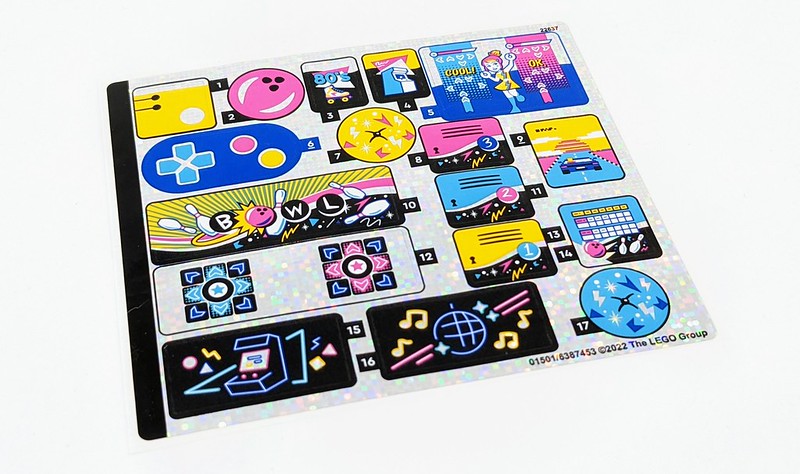 The arcade is configurated to be an enclosed building, which can also be opened out to give better access to the interior. This connects three different sections to create the whole arcade. There’s a bowling alley, which makes up the centre of the building. This has all the elements you’d expect to find on a bowling lane, including a score screen, bowling pins and a ball launcher. 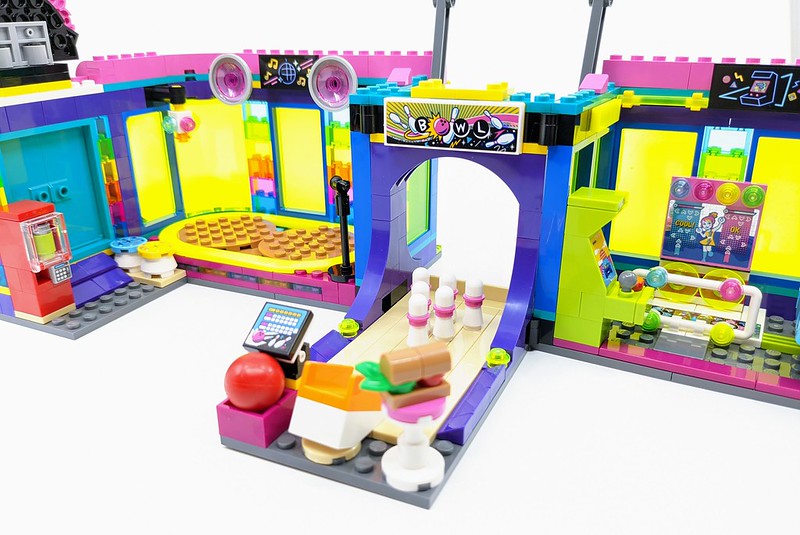 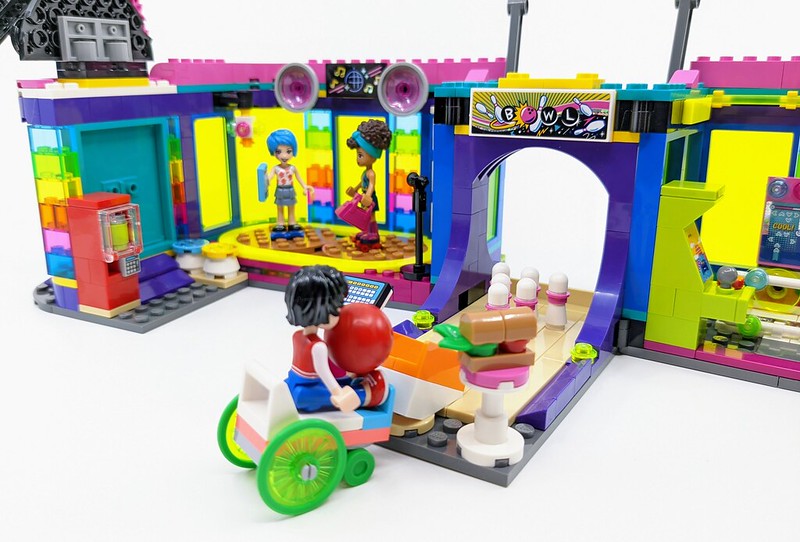 To the right of the bowling lane is a small arcade section, which features a racing game arcade cabinet, an air hockey table and a very cool little dance machine. The excellent stickers are used to great effect here, I particularly like the little dance game screen, featuring a dancing mini-doll. 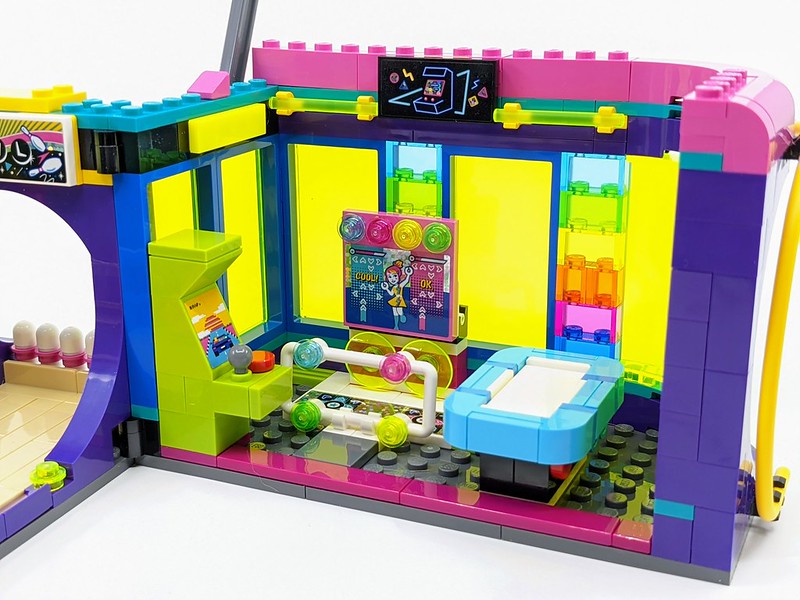 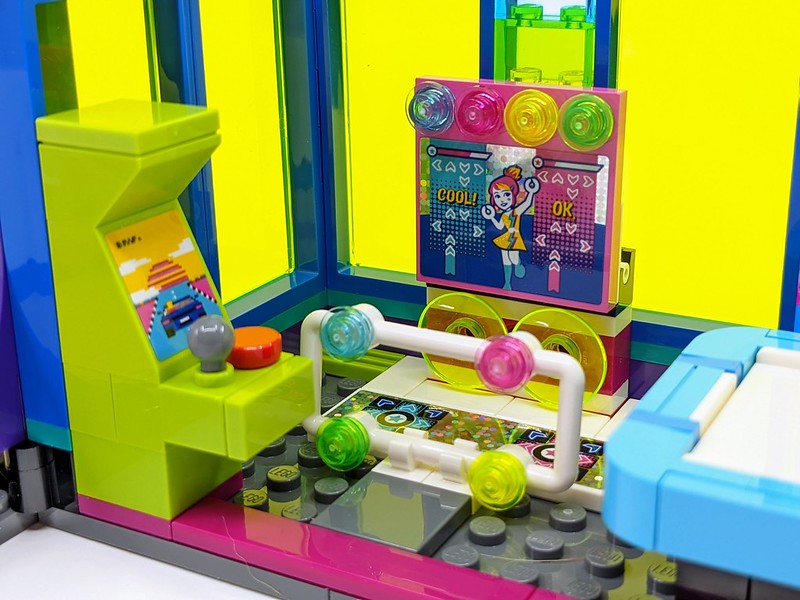 The area to the left of the bowling alley is the largest of the three sections as it also includes the door section of the arcade. Inside is the roller disco dance floor part of the building. This is made up of two large round plates, which are mounted on splat gears. One of those gears can be accessed from the outer wall of the arcade and is used to make the ‘dance floor’ move. This section also includes a vending machine and some lockers. It’s all these little details which add to the charm of the set, but the building as a whole is the true star of the show. 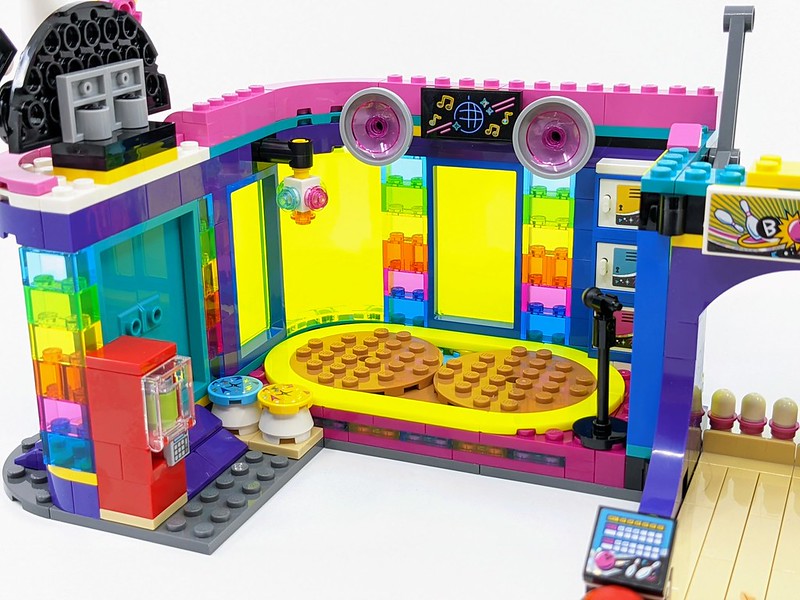 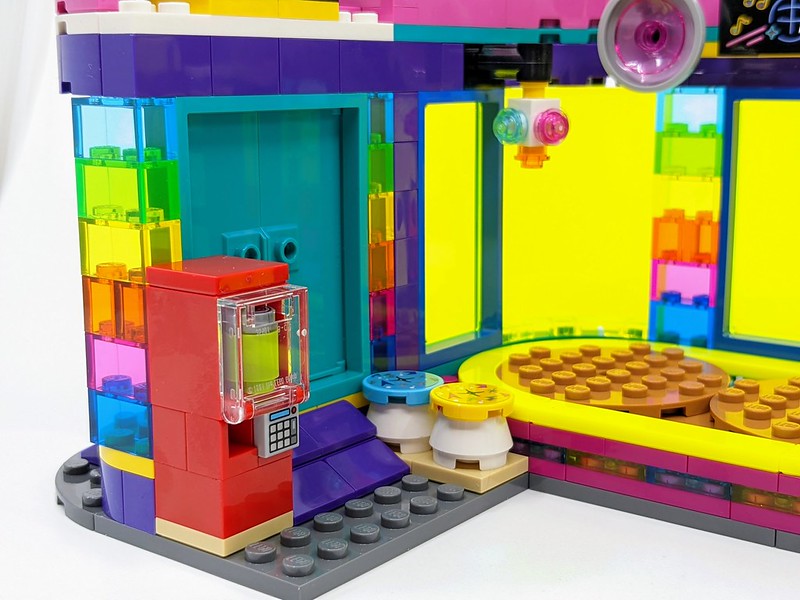 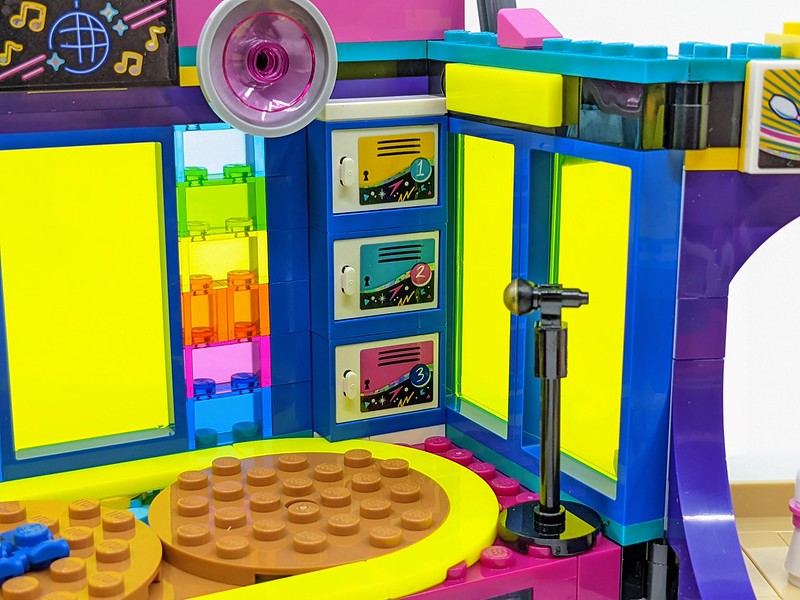 The Friends sets have a unique colour palette, which is used for this set but there are plenty of colourful touches added which make the set look amazing. Stacks of rainbow-coloured transparent bricks border fluorescent yellow window panels including a couple of rare curved panels. In fact, all the window panels are only currently found in this set. Another great bit of detail is a long piece of yellow tubing, which runs along the top of the building before curving around the front windows and door of the arcade. 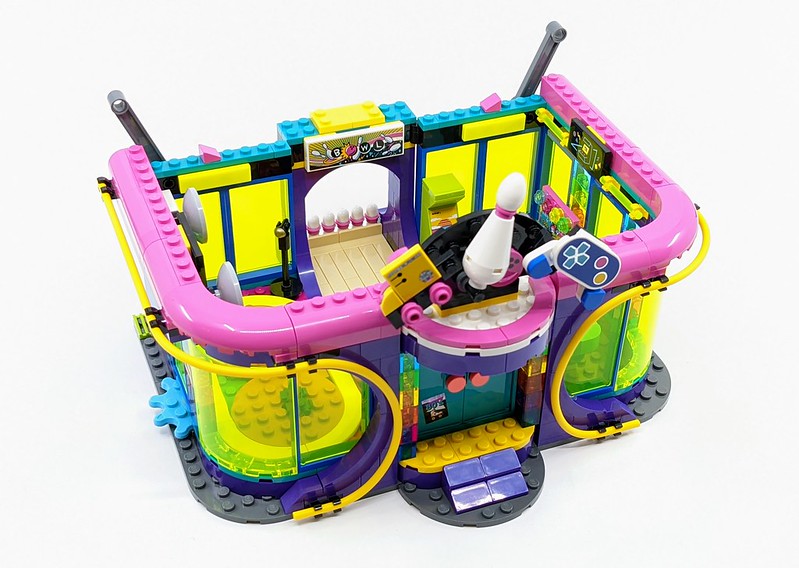 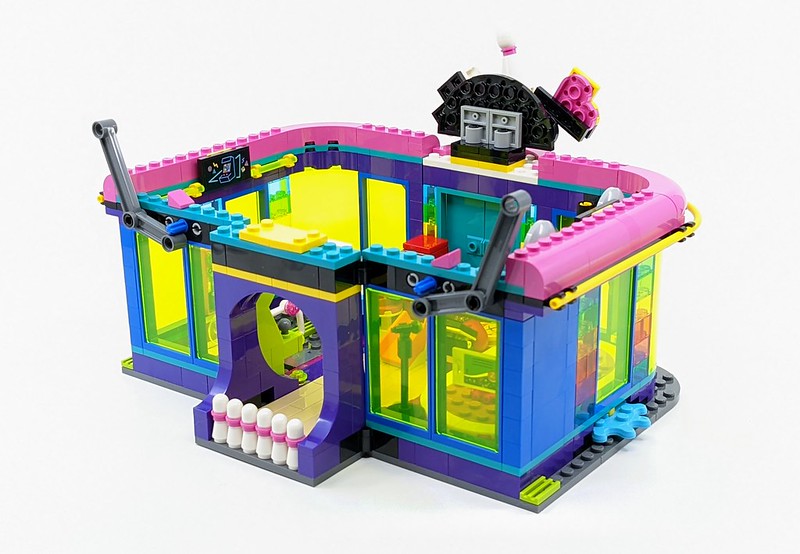 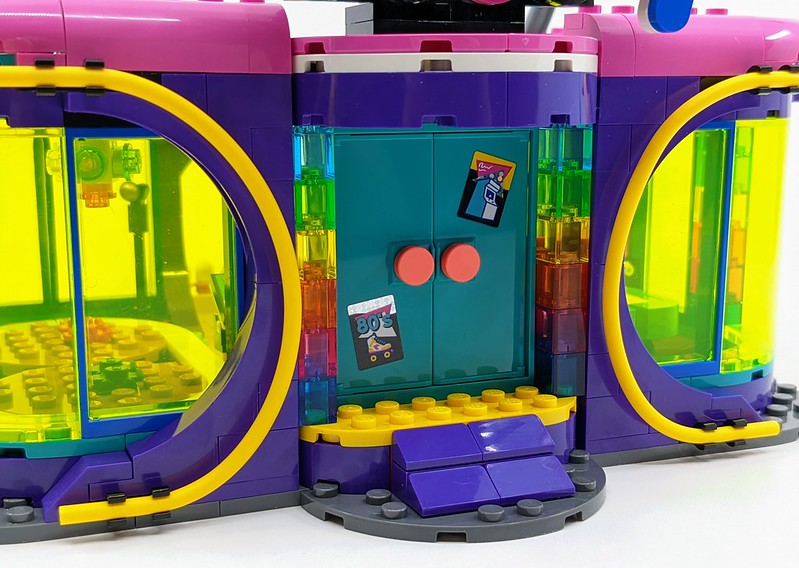 Finally, there are two interesting details found on the exterior of the building first up is an amazing little 3D sign mounted over the door. This features a roller skate, a bowling pin and a ball but a game controller. I do enjoy it when signs are created in this way, as they showcase how elements can be combined to create unique little details. The other detail is less obvious and is only apparent from a small image on the back of the box. As you build the set, you’ll notice a couple of Technic angle beams. These seemingly have no purpose, but with the set opened out they become a phone stand. Admittedly, it’s a rather elaborate phone stand. Alongside the arcade building, there’s also a smaller separate build, which features a palm tree and an oddly coloured trash can. It kind of feels unnecessary but it does add the 80s vibe I guess. 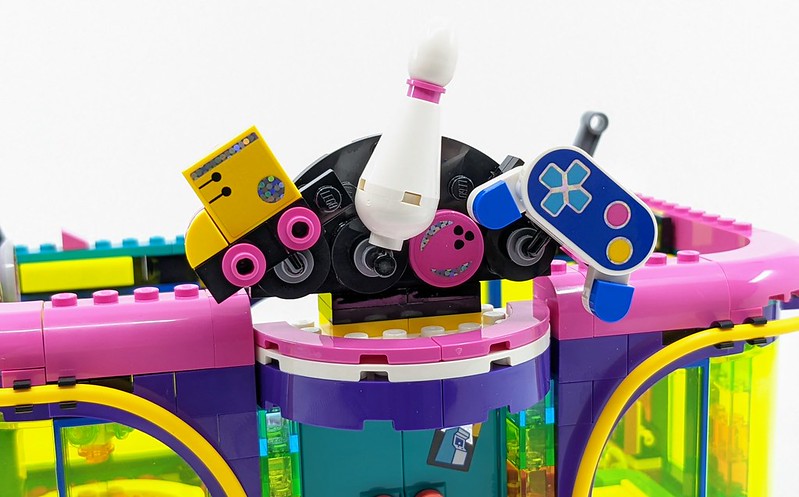 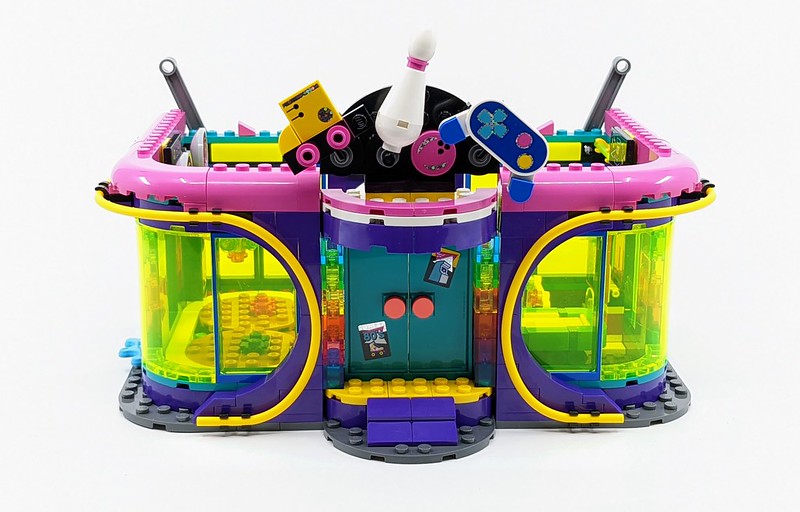 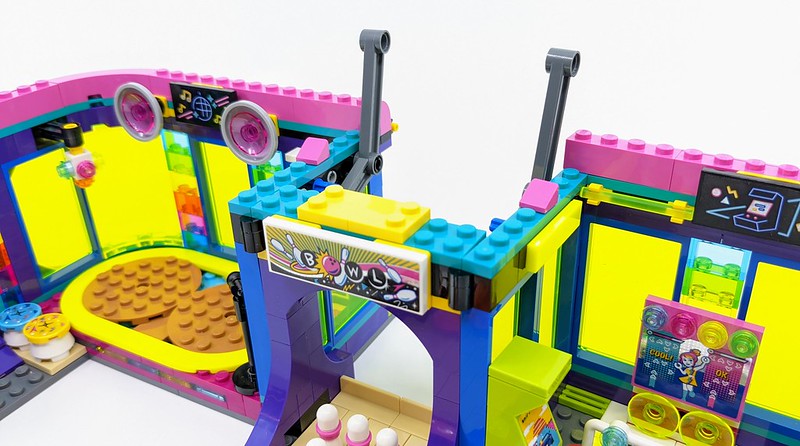 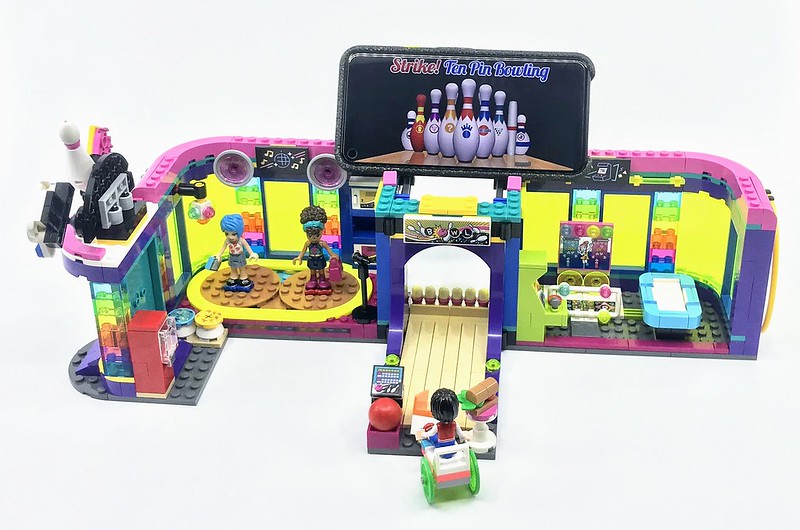 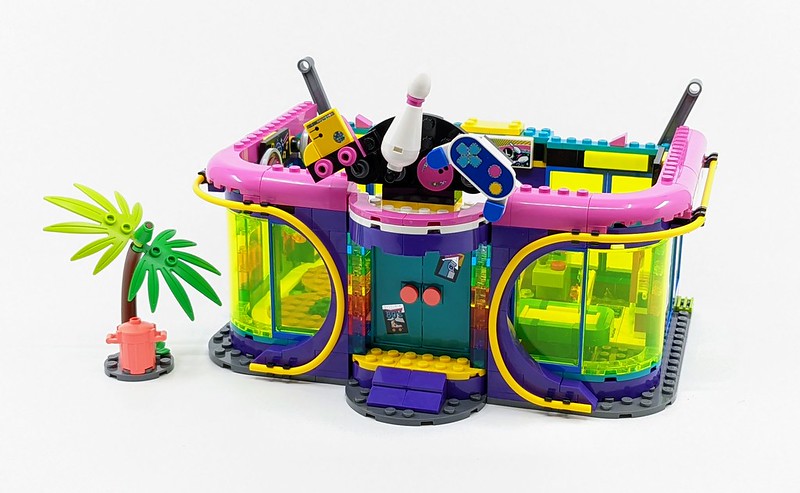 There are suggestions that the LEGO Friends theme may introduce a gang of new lead characters next year. Many of the new sets have already started to include new faces beyond the original five Heartlake City Girls. Andrea is the only familiar face in the set but has a different and unique appearance. Her outfit is exclusive to this set and she also has a new hairpiece introduced this year and only found in one other Friends set. Evelyn is a new face to Heartlake City and although she appears in a similar style in other recently released, the face paint on her head makes her unique to this set. Jackson is another new character and also appeared in the special 10th Anniversary Treehouse set. The character uses a wheelchair, which is brick-built unlike the ones used by minifigures. Unfortunately, this style of a wheelchair just looks a little odd. 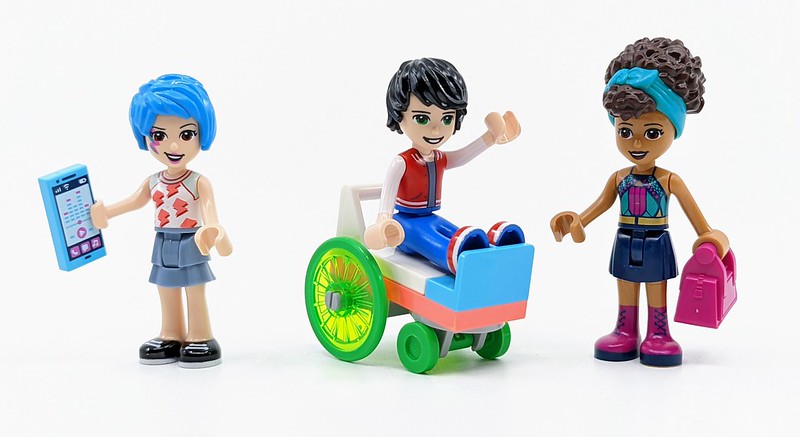 Although it has the traits often associated with Friends sets, it’s still a pretty awesome set. The use of colours and elements gives the set a unique and impactful appearance. Should you wish to swap out the mini-dolls for minifigures, that’s easily done and if you seek sets out for the parts rather than their build, this set includes some great elements including plenty of transparent elements. One which I really liked in this set was the stickers, the LEGO graphic design team are really creating outstanding stickers and these have the added bonus of being on shiny material.

– Some of the transparent elements are scratched up

This set was requested and provided to BricksFanz by the LEGO Group for purposes of review. The thoughts within this review are that of BricksFanz and do not reflect those of the LEGO Group. Providing a set for free does not guarantee a favourable opinion of the set.