We continue to take a closer look at the new 2018 LEGO® Elves sets. As the theme enters its fourth and possibly final year, the magical land of Elvendale is once again under threat from evil forces. The dark elf witch Noctura wants to imprison the Elemental Guardians and steal their elemental shards – four crystals that can harness all fire, wind, water and earth magic in Elvendale. The fourth set we are taking a look at includes elves, Arai, the Wind Elf and Lumia, the Guardian of Light, along with Phyll the Shadow Bat, Cyclo the Wind Dragon and Sebastian the song bird. So let’s take a closer look at set 41193: Arai & the song of the Wind Dragon. 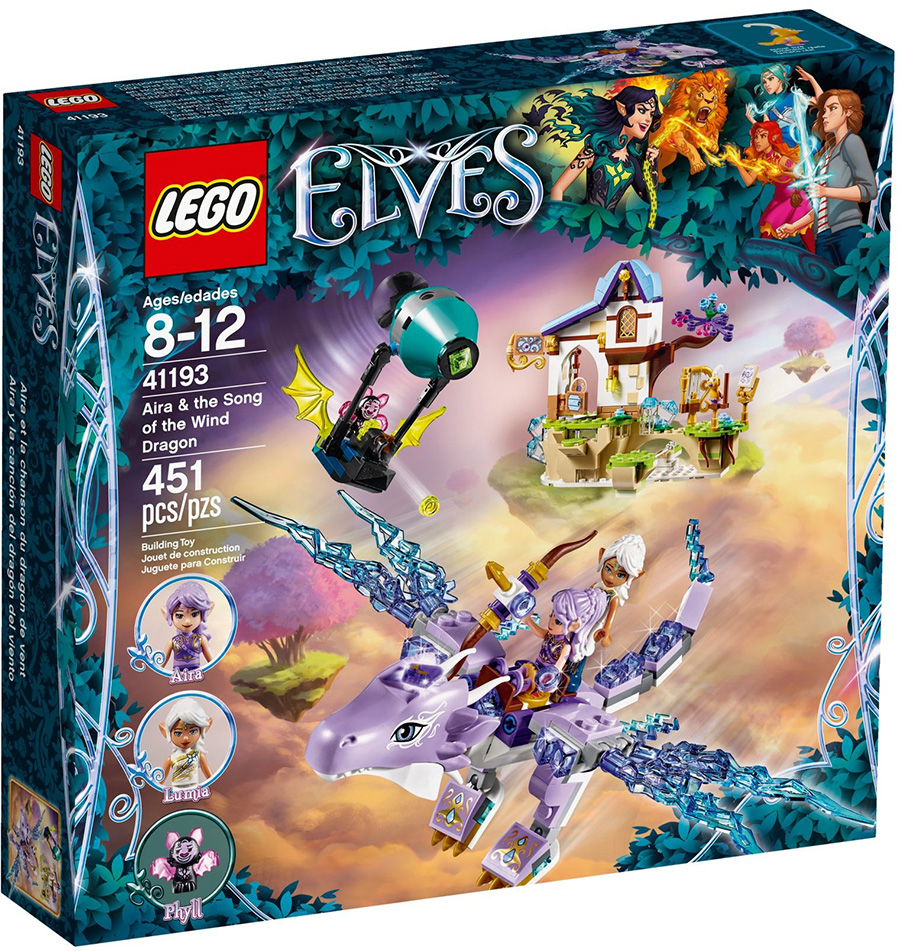 Seek the magic within to help Aira, Lumia and the Guardian Wind Dragon face the shadow bat! This amazing LEGO® Elves toy for girls and boys features a fully posable and buildable wind dragon with transparent wings and space for 2 mini-doll figures. The set also includes a bat airship with shooting function and spinning propeller, and a ‘floating’ island music school with opening entrance door, hidden chest and rotating sign. Includes 2 mini-doll figures, plus bat and bird figures. 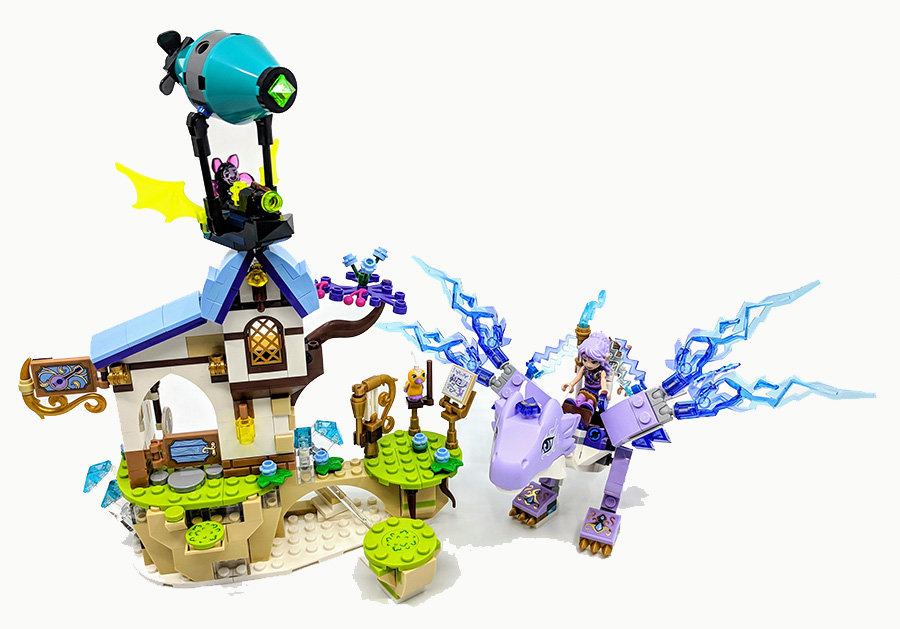 Unlike other sets we’ve taken a look at in the new LEGO Elves range, the focus of this set flips from the elemental creature to the scenery. With the main part of the set being the music school. But the build begins with Cyclo the Wind Dragon. Magical dragons have focused heavily across the LEGO Elves themes, and the one featured in this set is similar to others. In fact Cyclo uses a newly coloured version of the dragon head used on past creatures. But unlike most of the other dragons, Cyclo only has two legs. Which makes it look a little odd. 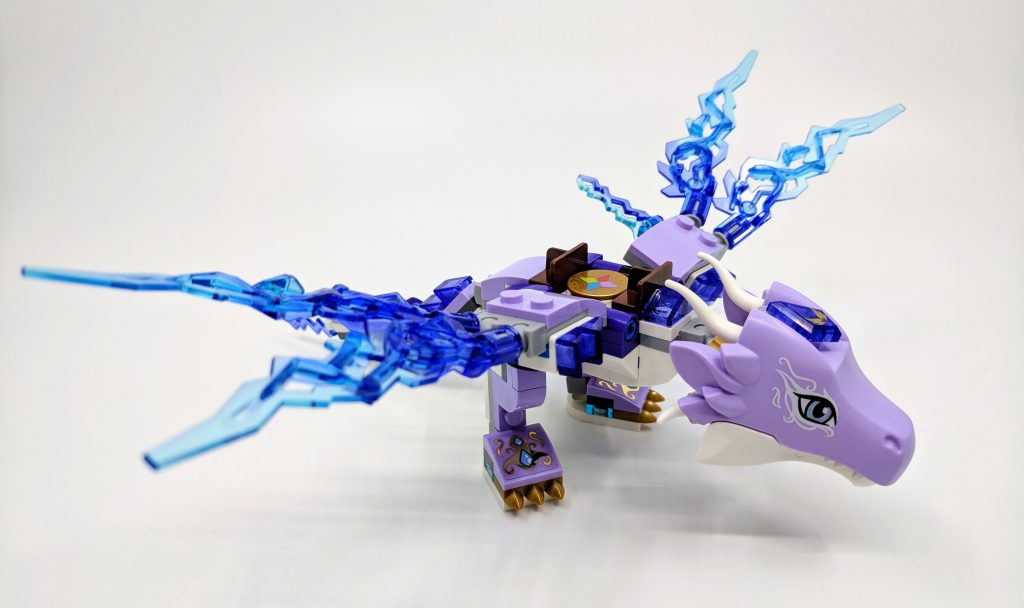 Despite the lack of appendages, Cyclo is a fun little build and looks quite cool. The wings use the a blue/purple variant of the larger flame elements, which until now has only appeared in the NEXO KNIGHTS line. In fact much of the main body parts of the dragon are quite rare, with the lavender pieces not overly found elsewhere. Unfortunately Cyclo suffers from the same issues has other creatures in the Elves sets. They all rely heavily on the use the micro ball-joint connectors. These are great for creating highly posable joints, but since they are only available in grey colours, they stick out like a sore thumb against other parts. Hopefully one day these will start to be created in different colours, has they are a very useful set of elements to have. 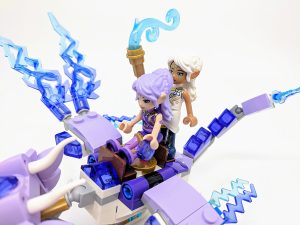 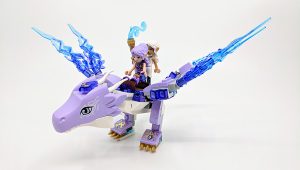 The main part of the build is this quaint little building which floats amongst the clouds of Elvendale. The style of the building is similar to others found in LEGO Elves sets, and uses similar build techniques. Getting a building to appear as if it’s flosting isn’t easy, but a small new of clear pieces are used within the rock of the island, help a little. There’s also a smaller island set on a clear plate shaft. Although this looks fun its connection to the rest of the set is quite weak and you’ll find the island easily becoming unconnected. As the building represents a music school, there’s plenty of musical themed things going on around the building. To the right of the main section is a smaller island, where you’ll find Sebastian the song build and a cool little harp. This also hides a fun little secret, so well I forget where it was after building the set and though a piece was missing. It wasn’t and as you can see a brown box piece, is topped by a 2×2 green plate, which blends nicely into the rest of the island. 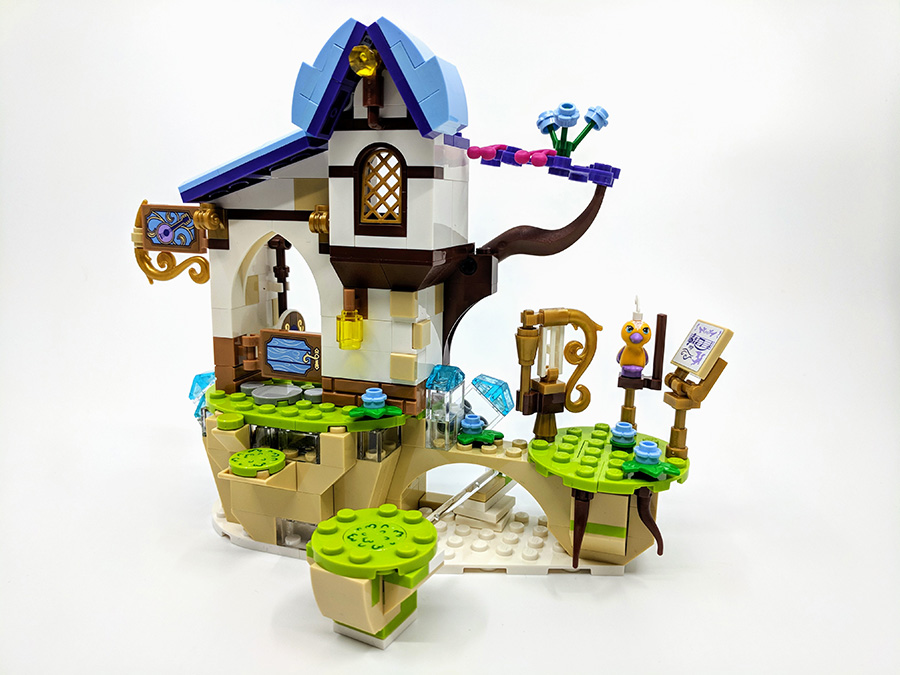 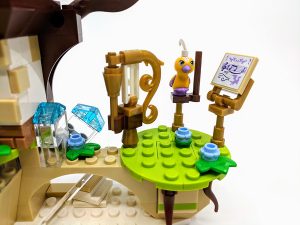 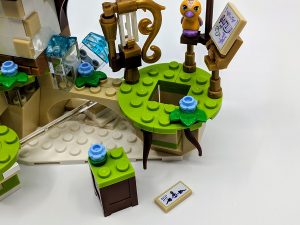 Inside you’ll find plenty of detail including a tiny bed, tiles with sticker detail and a funky little pipe organ. This has a trio of pearl gold Technic tubes to represent the pipes. Under the music room is a basement which hides a crate containing the pieces needed yo build the Cyclone Bow. My absolute favourite bit of detail is the crystal shards protruding out of the sides of the island. The music school is a great little build, which uses some fun elements. 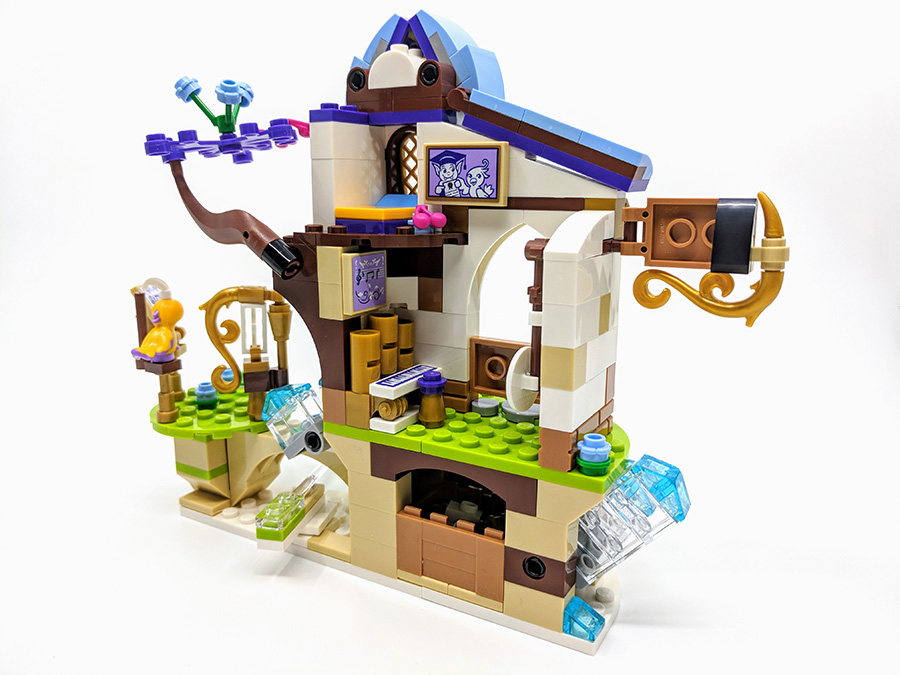 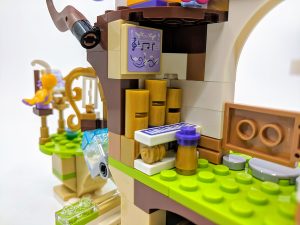 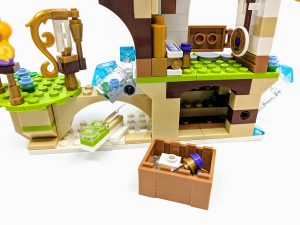 The last piece of the build is another flying contraption, which takes the form of a miniature blimp. It’s still a little confusing as to why flying bats, need to rely so much on the use flying vehicles to capture the Elemental Creatures, but who are we to question the evil plans of the Elvendale’s latest big bad. This uses a couple of uniquely coloured elements, including the fluorescent green wings, so far only found in the new Elves sets and a rocket step piece, available for the first time in bright bluish green. The blimp includes a stud shooter and an area to sit Phyll the Shadow Bat. Who can only be found in this set. Unfortunately there isn’t any random bit of food on the blimp, I’ve come to like finding them in other sets. 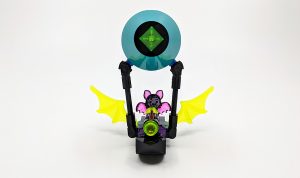 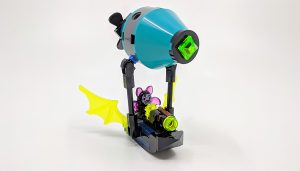 This is one of only two 2018 Elves sets to include two mini-dolls. They include Aria the Wind Elf and Lumia the Guardian of Light. Lumia makes here mini-doll debut in this set and has identical hair to Aria, although a different colour. Aria has appeared in other LEGO Elves sets, but here legs and torso pieces are exclusive to this set. They are joined by another Shadow Bat, these new pieces are found in each of the 2018. Phyll is only included in this set and has a great cheeky expression on his little face. 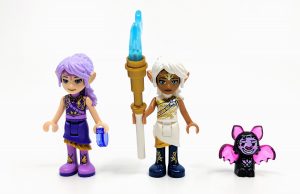 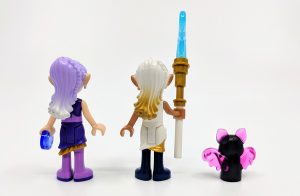 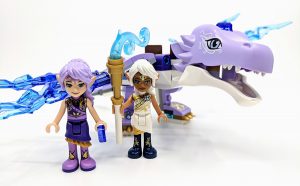 As the sets become bigger and therefore more detailed, it’s fun to see have pieces are used within the Elves range. It’s also quite impressive to see how many new or recoloured pieces make there debut in the range. The dragon is a fun part of the set, but the lack of another pair of legs or even a couple of tiny T. rex type arms, make it look odd and unfinished. The grey joints are also a little iffy looking, although their purpose is necessary, there colouring is just too contrasting to the rest of the dragon. The Music School is really, fun not only to build but thanks to the little bits of detail it contains. It would of been nice to have the base look a little more cloud like or even just use clear plates in place of white, to better give the impression of floating. However it’s a great little set and will sit nicely alongside other Elves sets from previous years as well as those released this year.