This month we taking a look at each of the new LEGO® Elves sets released this year. As the theme enters its fourth year, the magical land of Elvendale is now under threat from evil forces. The dark elf witch Noctura wants to imprison the Elemental Guardians and steal their elemental shards – four crystals that can harness all fire, wind, water and earth magic in Elvendale. The third set we are taking a look at includes the fire elf, Azari, the elemental fire guardian, along with two collectible Shadow Bats. So let’s take a closer look at set 41192: Azari & the Fire Lion Capture. Although the sets are increasing in size and price, this particular set is one of the mid-range ones. As with the other LEGO Elves sets, it’s made up of three main components – a buildable creature, a piece of scenery and creepy contraption, complete with Shadow Bats. The main part of the set is the brightly coloured lion, who is also the elemental fire guardian. You’ll notice the lion has its own unique head element, this is similar to the dinosaur heads from the various Jurassic World/Dino sets. Made of two separate pieces, the lion’s head can be posed in various ways, thanks to being mounted on a ball joint, plus the jaw can be opened to various widths. 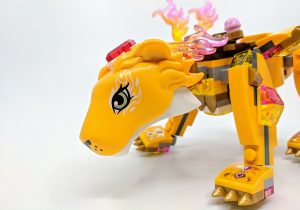 Although the mane isn’t as visible as a real lion’s one, it’s partly created with a couple of fun new ‘wing fire’ elements. These are also used on four protruding wing-type pieces along with the tail. These are decent representation of fire and their pink hue helps to give it a more magical look. Although they are nice elements, I think it would of been better to have more on them around the neck, to give a fuller looking mane. Plus the wings look a little odd on a lion. The legs of the lion are each fixed with ball joints, these fairly recent pieces how become really useful in a lot of LEGO sets. However they are some of only a few elements which are only available in a limited range of colours. The ball-joints are grey and really stand out against the bright colours of the lion. Another slight annoyance is the round side show element used on each of the lion’s feet. They may be great at making the feet more paw-like, but they make standing the lion a little wobbly. Despite that the lion actually has a fair few rare pieces, with many of them making their debut in this set. 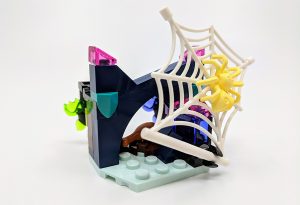 Those pesky Shadow Bats just love lurking in caves and caverns, so you once again get a little cave-type bit of scenery to build in this set. A spider’s web, complete with new yellow coloured spider, covers the entrance to the cave, which hides another random piece of food. This is definitely a running theme across the three sets, we’ve built so far. But one of the best features of this little cave, can be found around the back. Here you’ll find a couple of upside down 1×1 plates with clips. The Shadow Bats can be put on these, to pose them in the classic sleeping pose. But behind each perch is a tiny little bed, coloured matched to each of the bats. A great little bit of added detail. The catapult looks great and continues with the dark colour scheme seen in the smaller sets in the range. It’s manages to look mechanical whilst also being a little magical looking. Most of the this uses earth blue, accented with bright violet and fluorescent green pieces, including that newly re-coloured chain. There is a old-school shield affixed to the front of the catapult, which has a shiny sticker featuring Noctura’s crest. On the opposite side is a map of Elvendale, although these are both stickers they add a nice bit of detail to the catapult. Just like those pesky ball joints, the wheels on the catapult are let down by the use of brick yellow Technic pins to hold them on. These could of been hidden by a popping a 2×2 rounded flat tile over them. The catapult is joined by a slightly random flying doohickey, not much can be said about this, however it does use those new trans green wings, introduced by the LEGO Elves theme this year.

The set only includes one mini-doll and it’s the fire elf, Azari. Her outfit, so legs and torso, are new for 2018 and only appear in this set. The golden print detail is great and you can just about make out the head of a lion. I also like the double-layered edging of Azari’s skirt. The set also include two Shadow Bats, Vespe and Molo. Vespe also appears in the smallest of the Elves sets and Molo features in the largest set in the range. I do like the bats, especially the print detail and transparent parts. As the sets get a little bigger, all parts of them gain a little more detail and functions. The fire lion features some great parts, it’s just a shame about the grey bits peeking through on the legs and feet. Plus those fire tipped wings look a little odd, especially on a lion, but they still add a nice bit of detail to the fiery beast. The cave may only be a small part of the set but I love the little beds on it. They are a fun bit of detail. The catapult may look detailed but it lacks any sort of worthwhile play functions. The bigger catapult arm can be moved by turn the cogs on the side and the smaller catapult can be flipped to fire transparent tubes. It would of been nice to have something a little more automated. Despite those small shortcomings, the set still maintains the fun and magical nature of the whole LEGO Elves theme. The use of part, especially new elements and recoloured pieces are often overlooked as the theme is deems a poor spin-off of the equally belittled Friends theme. Both the Elves and Friends have some pretty cool sets and this is another great addition to the Elves range. Azari and the Fire Lion Capture set is available now from LEGO Brand stores, shop.LEGO.com and exclusively from Argos in the UK. Check out our reviews of sets 41190: Emily Jones & Eagle Getaway and 41191: Naida & The Water Turtle Ambush.