This month we taking a look at each of the new LEGO® Elves sets released this year. As the theme enters its fourth year, the magical land of Elvendale is once again under threat from evil forces. The dark elf witch Noctura wants to imprison the Elemental Guardians and steal their elemental shards – four crystals that can harness all fire, wind, water and earth magic in Elvendale. The second set we are taking a look at includes the water elf, Nadia, the elemental water guardian, along with another of the mischievous Shadow Bats. So let’s take a closer look at set 41191: Naida & The Water Turtle Ambush. 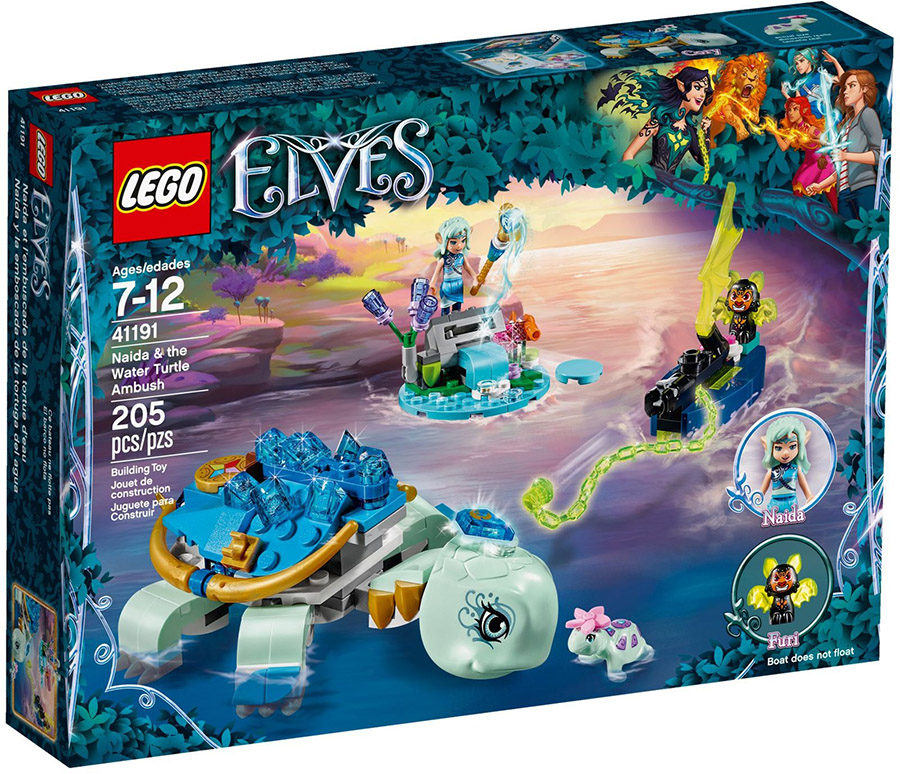 Seek the magic within to help Naida protect the Elemental Guardian creature! This exciting LEGO® Elves building toy features a large buildable water turtle with movable head and legs, and space for a mini-doll figure, plus a small island with disc shooter and a boat with chain shooter and space for a bat. Includes a mini-doll figure, small turtle figure, fish figure and a bat figure. 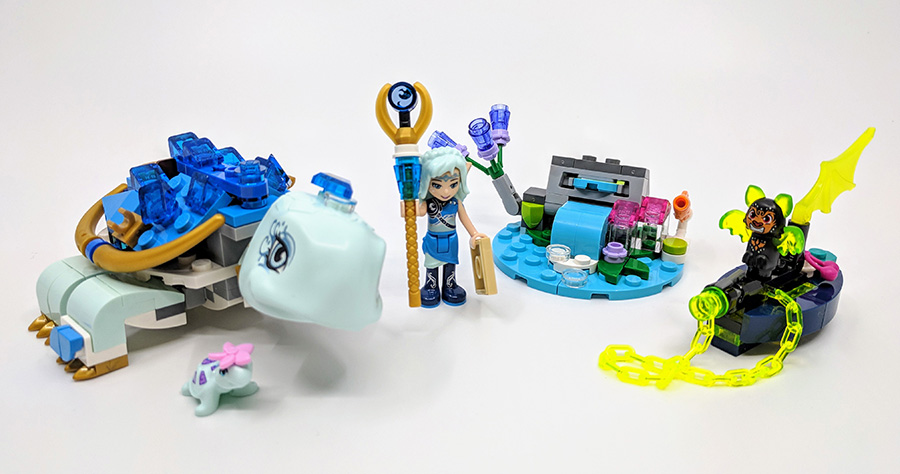 As with the first LEGO Elves set we’ve taken a look at, this set follows the same sort of set up, with a buildable creature, some scenery and vehicle-type contraption. When the new Elves sets were first revealed this particular set was one which stood out, thanks to the buildable turtle guardian. This includes a unique new head element and one of the first elemental shards, which is also an new element. 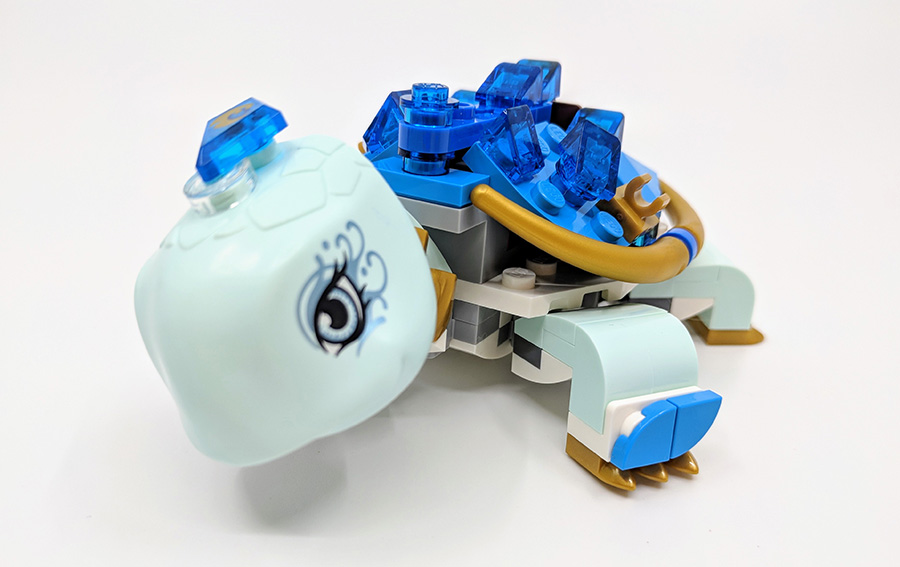 The Guardian Turtle uses a nice mixture of colours to create a mythical looking creature, partly thanks to the gold pieces and transparent blue bits. Getting the turtle to look like a turtle is tricky than you’d expect with LEGO bricks. The curved nature of the creature, especially the shell, isn’t easily achieved with overly angle elements that make up much of the LEGO build system. The use of a unique piece for the head is understandable, but it could of been easier to do the same for the shell. 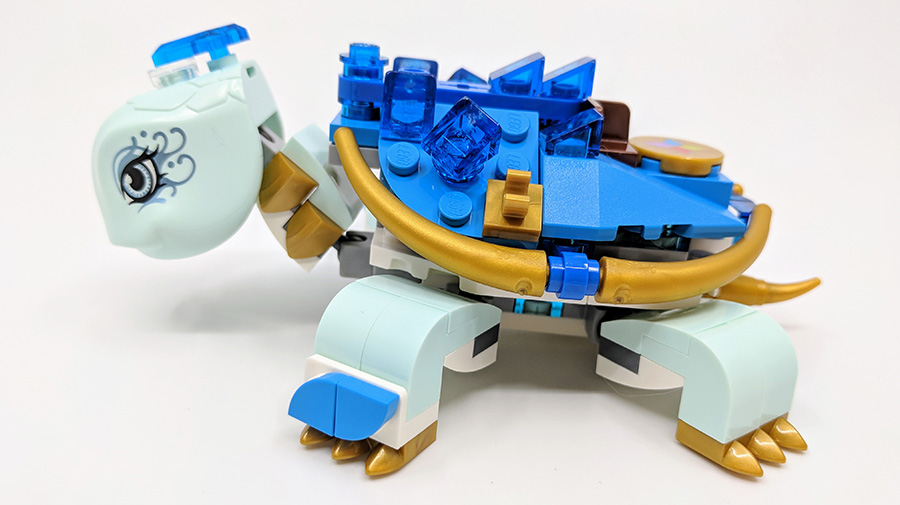 Thankfully the LEGO designers have instead opted to use an impressive mixture of parts to create the shell. The use of the element officially known as the ‘tip of the tail’ works perfectly to frame the shell and give it the shape you’d expect. This gold trim works well against the dark azur pieces used for the main section of the shell. Interestingly these many of these pieces are exclusive to the set. The shell is also home to an area, upon which a mini-doll can be placed. There is another of the elemental shard discs and a foot plate, which does look a little out of place due to the brown colour. 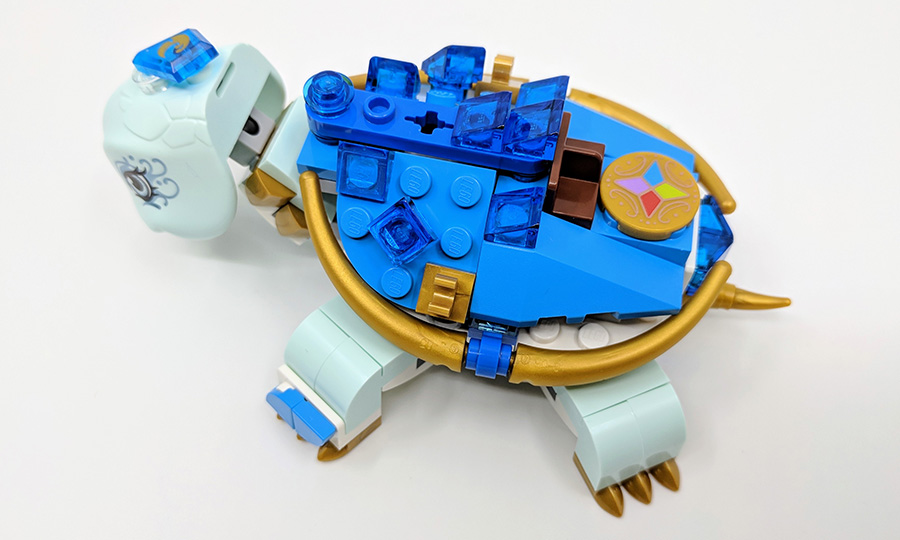 The rest of the Guardian Turtle uses a lot of aqua elements, although they work well colours, I’m not a fan of the colour in general. The aqua pieces are mainly used on the legs, which is the sets biggest issue. These are connected to the main body of the turtle with a number of ball joint connectors. Despite their usefulness across a number of sets, they are only available in grey and dark grey. These really stand out against pale aqua colouring. 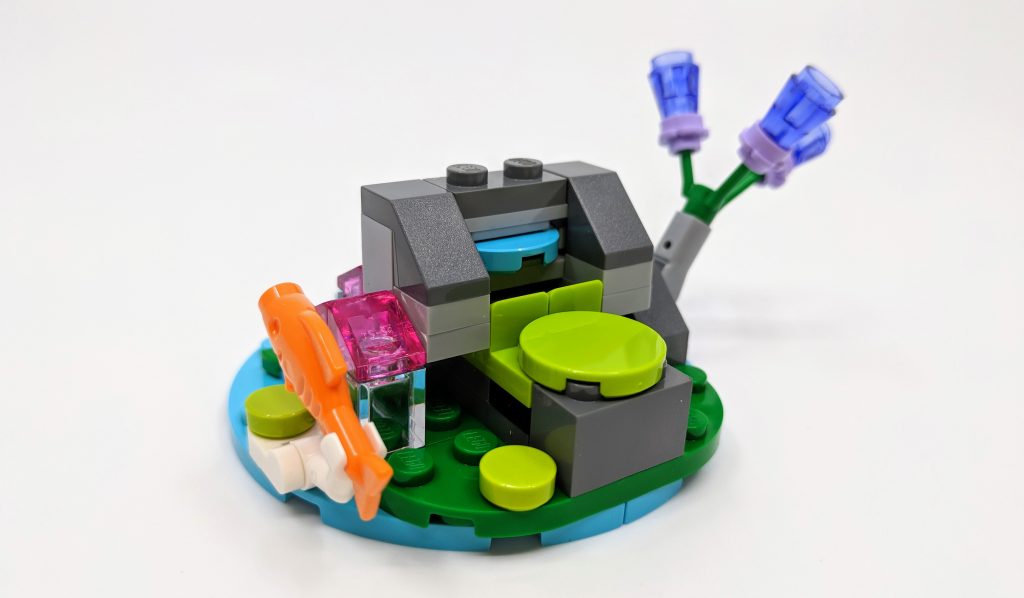 The next part of the set is a small rocky outcrop, which hides a disc firing brick. It’s only a small part of the set but it’s by far one of the best. The use of part and how they are put together give it a fun look and the disc firing brick adds a nice bit of the playability. The section which includes this special brick is mounted in such a way, that when it is tilted back, the disc presses against two ‘cheese slopes’ it forces the disc to be fired and it springs out with some force. 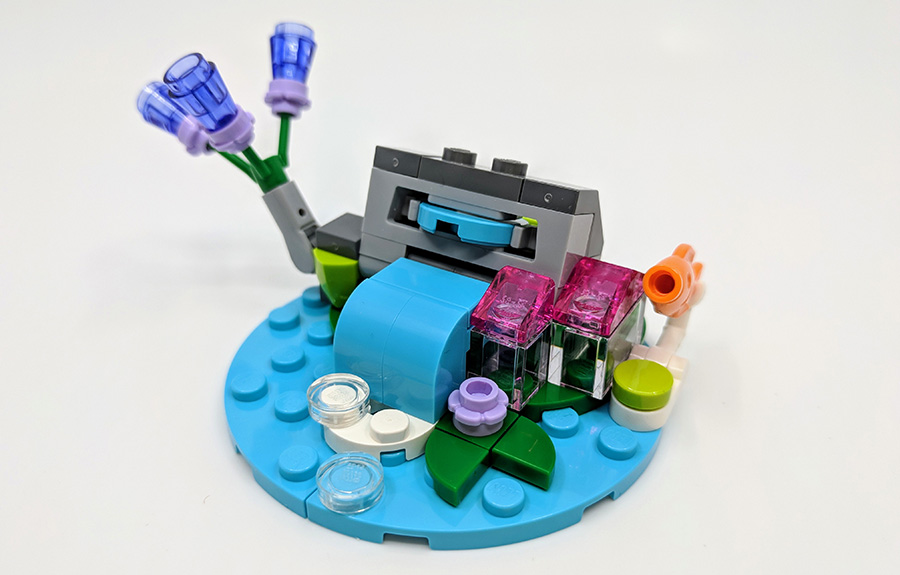 There are a few fairly new elements used within floating island section, including a couple of 1/4 round tiles, the new flower element and stem. The clear pieces and medium azur arches to create a small waterfall are meant to give the impression of the rest of the island is floating. Although it doesn’t really look as though it’s floating, it still look quite cool. 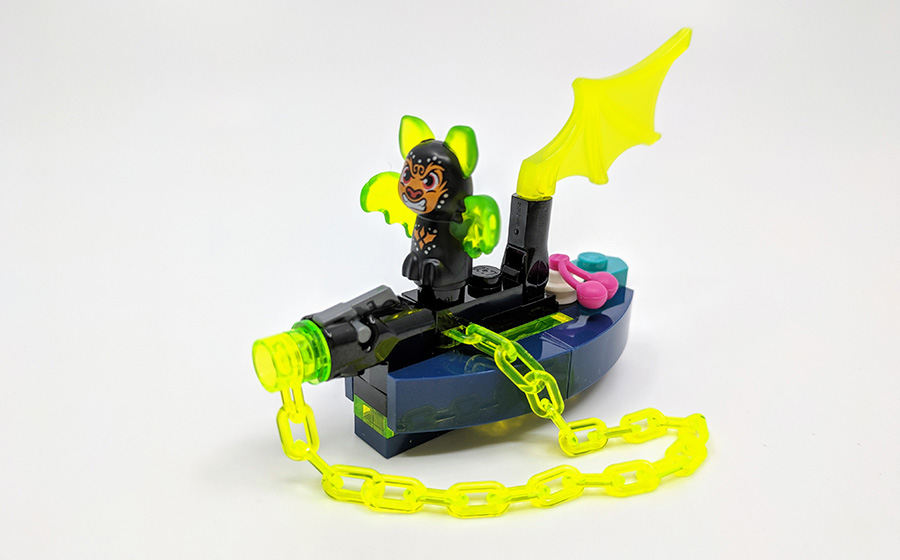 The last section of the build is another of Noctura’s strange vehicles, which take the form of a small boat. To help it contrast to the Elves more colourful side, the boat uses a lot of dark elements including a black ‘deck’ complete with chain cannon and earth blue pieces for the sides. As much as I admire the Elves sets use of unique or recoloured elements, they also seem to suffer a odd affliction of using random pieces for no particular reason. In this set they can be found on the boat, which has a medium azur ‘tooth’ randomly placed on the back and an even more random bunch of berries. Those spider bats must love to eat. 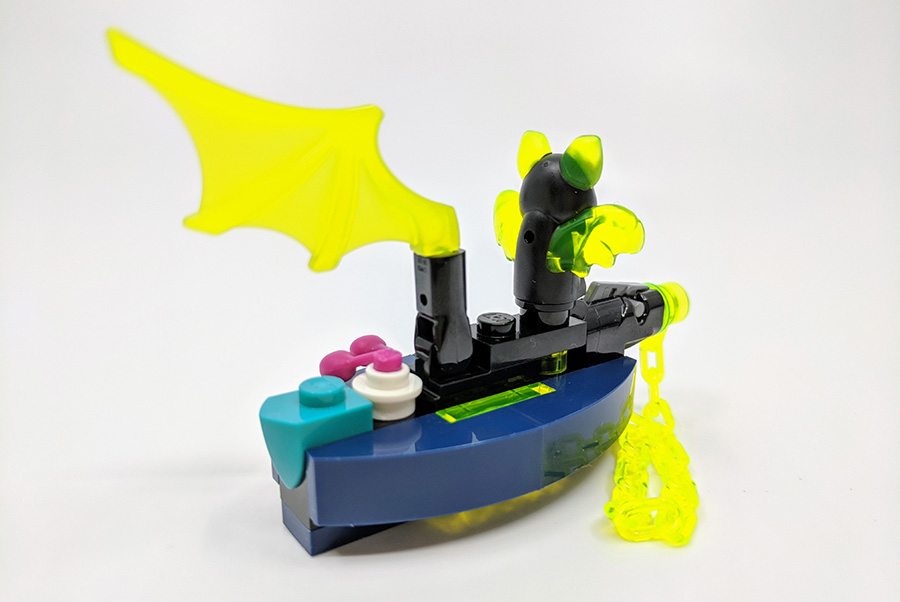 The most eye-catching part of the boast is the bright green transparent pieces, which are exclusive to the Elves range for now. These include another wing piece and a chain, which is connected to a stud-shooter and it used by the spider bats. to capture the Guardian Turtle. They are fun parts and something which could be useful to use in MOCs, another bonus for the Elves sets.

Naida is the Water Guardian, who has appeared in a number of other LEGO Elves sets before now, however her torso and legs are both new for 2018. These feature the same colours has the Guardian Turtle and the Water Elements symbol. As I’ve said previously, not everyone is a fan of the mini-doll, but I think they work well for the Elves sets, more so than the Friends mini-dolls do. 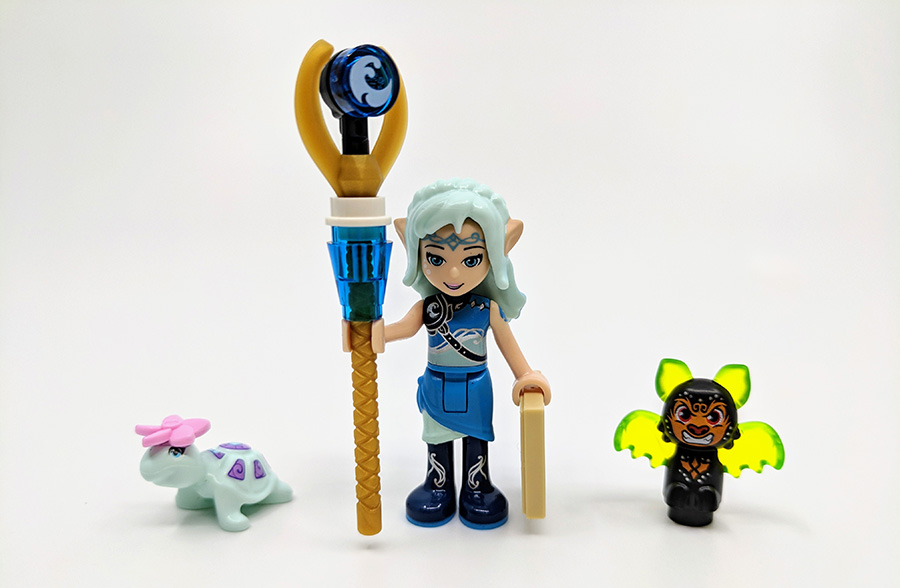 Joining Naida, is a baby turtle, which is a single element that has previously been used in the LEGO Friends theme, although it has been recoloured here to match the larger brick-built turtle. But the star of the set’s characters is another of the Spider Bats. Furi can only be found in this set, so if you aim to catch them all then you’ll need to grab this set to get them all. The Spider Bats are a new for 2018 piece and mix a black body with transparent pieces for the wings and ears. These mixed with the great print detail offers a fun little character, kids will love, despite doing the evil bidding of a dark witch. 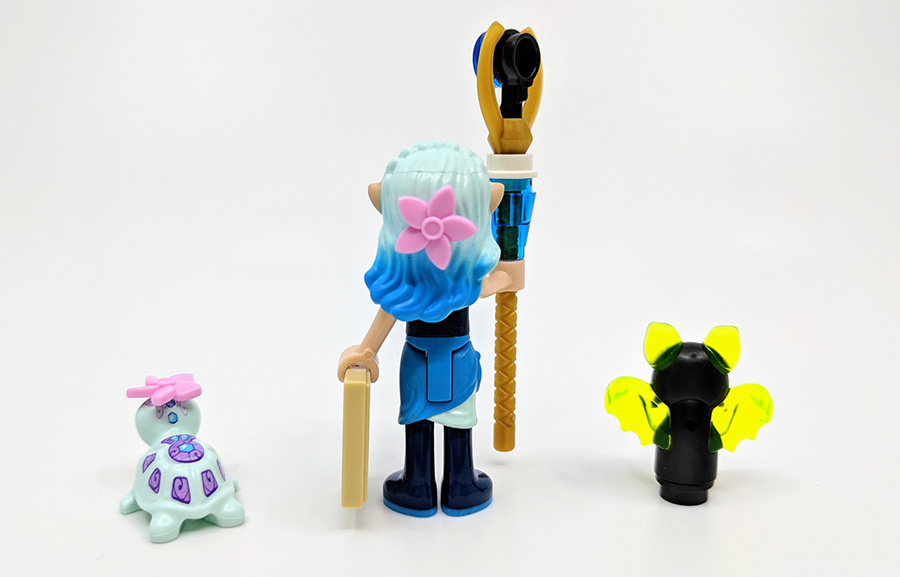 I have to admit the set is not as exciting as I first thought, when I first saw it. The turtle is cool and uses pieces well to create it and well as giving it a magical feel. The love the little floating island, in fact it would of been nice to have a bigger water scene, as it’s already packed with detail so just imagine what could of been done with a bigger section. The Spider Bat’s boat seems a little random, but thankfully this is to be a running theme across the sets. So although it does appear a little out of place here, when combined with the other sets, it makes more sense. The Elves sets are great for their use of parts and introduction of newly recoloured. The sets and theme in general may not be on the wish lists of the average AFOL, but we highly recommend you take a closer look at them as they are surprisingly fun to build and have a great array of elements. Something which has inspired our first ever build contest – Elemental Elves. Learn more about the build contest here.

Set 41191: Nadia & The Water Turtle Ambush set is available now exclusively from Argos in the UK, LEGO Brand Retail Stores and shop.LEGO.com. The opinions express within this review are those of BricksFanz and do not reflect those of the LEGO Group.