This month we launched out first ever build contest themed around the magical world of LEGO® Elves and to coincide with our Elemental Elves LEGO Build Contest, we are also taking a look at each of the new Elves sets released this year. Once again the magical land of Elvendale is under threat. The dark elf witch Noctura wants to imprison the Elemental Guardians and steal their elemental shards – four crystals that can harness all fire, wind, water and earth magic in Elvendale. The first set we are taking a look at includes Emily Jones, the guardian of the realm of Elvendale, along with Lumia the eagle and one of the mischievous Shadow Bats. 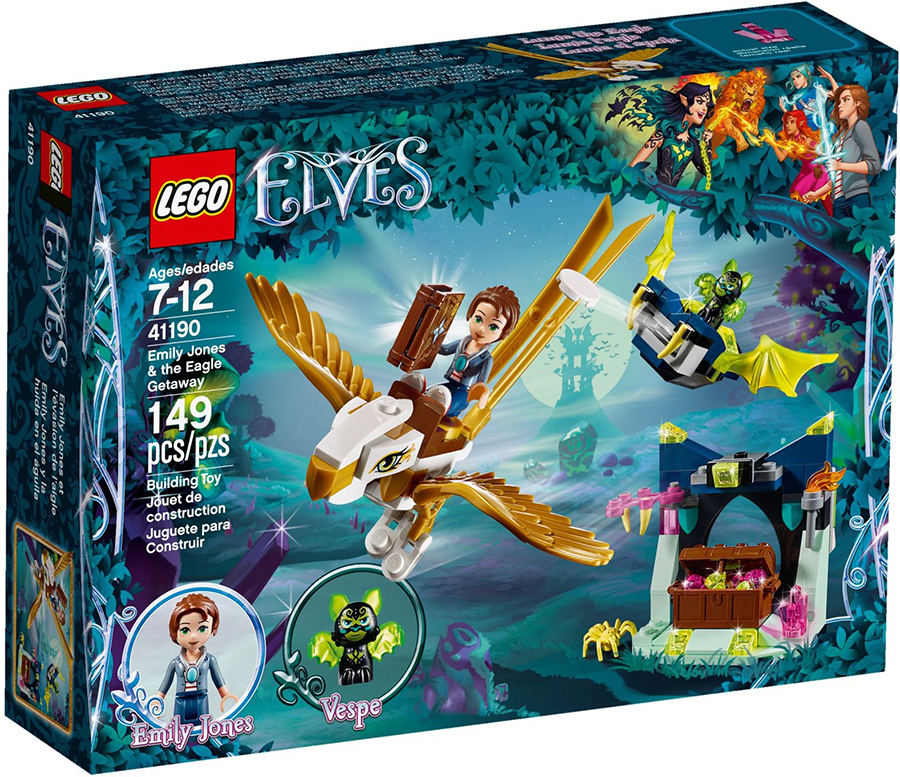 Seek the magic within to recover the stolen magical diary page with Emily Jones and Lumia the eagle! This thrilling LEGO® Elves set features a fully posable and buildable eagle figure with space for a mini-doll figure, cave with rotating treasure chest and upside-down bed for the bat, plus a ledge with a bat glider with disc shooter. This creative play set includes a mini-doll figure, plus bat and spider figures.

This years LEGO Elves sets each follow sort of set-up, with a piece of scenery, bad guy contraption and a buildable creature. Which is exactly what’s included here, with the build beginning with white and golden eagle, Lumia. This may only be a small creature, but thankfully it looks like a bird. Often these limited piece builds can look a bit iffy but Lumia is quite cool, partly thanks to the use of warm gold pieces. These aren’t overly used in sets, but aren’t considered particularly rare, apart from the two wing elements. These have only ever appeared in the Elves sets. Lumia’s head is a great collection of bow plates and ‘tooth’ elements to create a bird-like shape and yes those eyes are printed onto the white bow plate bow. On the back of Lumia is a little seat area, which appears on other creatures in the range, this seats a mini-doll perfectly and also includes another set exclusive printed piece, which features the elemental crest of the Guardian creatures. As you can see from the images, Lumia has rather small legs, but the easily carry the weight of the rest of the build, without having to pose it in awkward ways. Despite being a long way from the island of Ninjago, the set includes an element not often seen outside the NINJAGO range. Two blade pieces are used to represent the birds tail, these also help to give it and mythical look. The cave section has a lot going on, with a nice mix of colours, in particular the aqua pieces which haven’t really appeared in many other sets. These are mixed with earth blue pieces and jazzed up with a number of fluorescent pieces, these are a staple for the Elves sets and the work perfectly to add a little magical feel to the sets. The cave section is home to a treasure chest, which is fixed upon a turn plate. Underneath is missing page of Emily’s diary, which is a printed 1×2 tile. 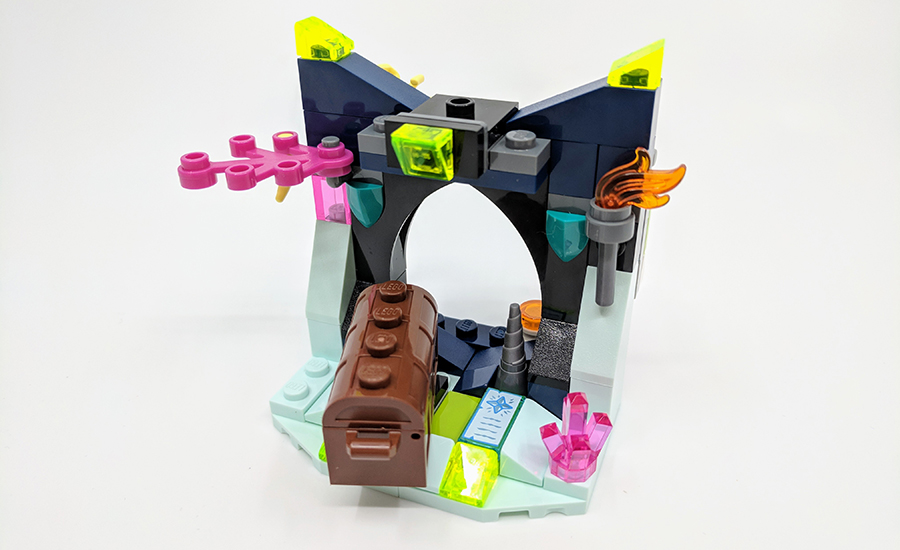 Around the back of the build is a little perch, upon which Vespe, the shadow bat can be hung upside down. If you look in the picture below, you see a couple of white cheese wedges and a green flat tile. Take a closer look at you’ll see this is a tiny little bed, which is an amazingly fun little bit of detail. Vespe is not alone, being joined by a yellow spider, another Elves exclusive element. Oddly a running trait across the new Elves sets is random bits of food, here the spider is chowing down a a 1/4 piece pie tile. The final part of the set is known as a Bat Glider, although it’s not quite clear why a flying creature would need a flying device, its still an interesting looking little build. It matches the colour scheme of the cave, using earth blue pieces and fluorescent pieces. It also includes two newly re-coloured animal wing pieces, these haven’t appeared in this particular colour before. 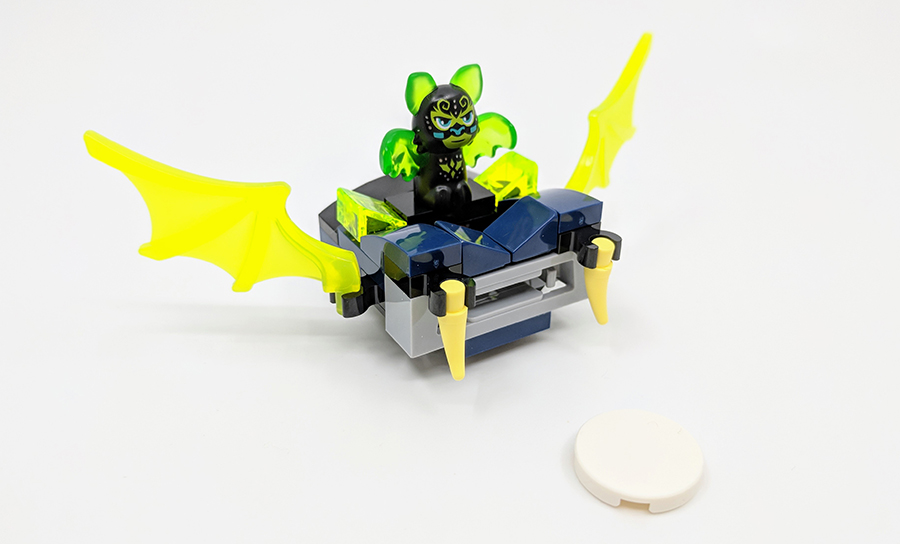 The glider includes a 1×4 disc shooter brick, which can launch 2×2 discs. A simple Technic pin is located at the read and when pushed in out shoots the disc and at a surprising rate. There is aa single stud 2×2 plate on the top of the glider, which you can pop Vespe on and the whole thing can be connected to the top of the cave section. The mini-doll has divided many, but despite you’re opinion of them, they seem to work well for the story and style of the LEGO Elves, more so than the Friends characters do. This set only includes a single mini-doll, which is the themes main character, Emily Jones. As the Elves story has moved on, Emily has grown up and her appearance now reflects that. Here Emily appears in a completely new outfit, which has a little print detail but what is there is nice and clear. Emily also sports a separate necklace element, it’s an important part of the Elves storyline so it’s nice this is included as an element and not just printed on. 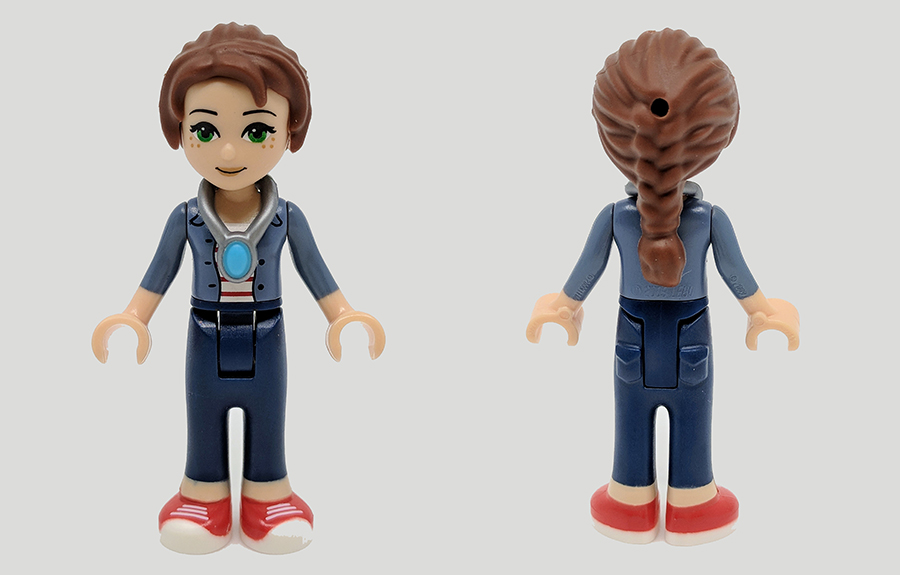 The diary which Emily is holding, is a little like the Book of Monsters from the NEXO KNIGHTS theme, although the version here has mainly appeared in Elves sets, with the printed cover section only found in this set. Joining Emily, is one of the gang of Shadow Bats, found across the Elves sets. This set include the green shadow bat, Vespe. The shadow bats are an entirely new element for 2018, and they are best described as a cat with wings. They don’t really look like a bat, but they are still fun, especially thanks to the transparent wings and ears. These are coloured to match the print detail of the body of Vespe. 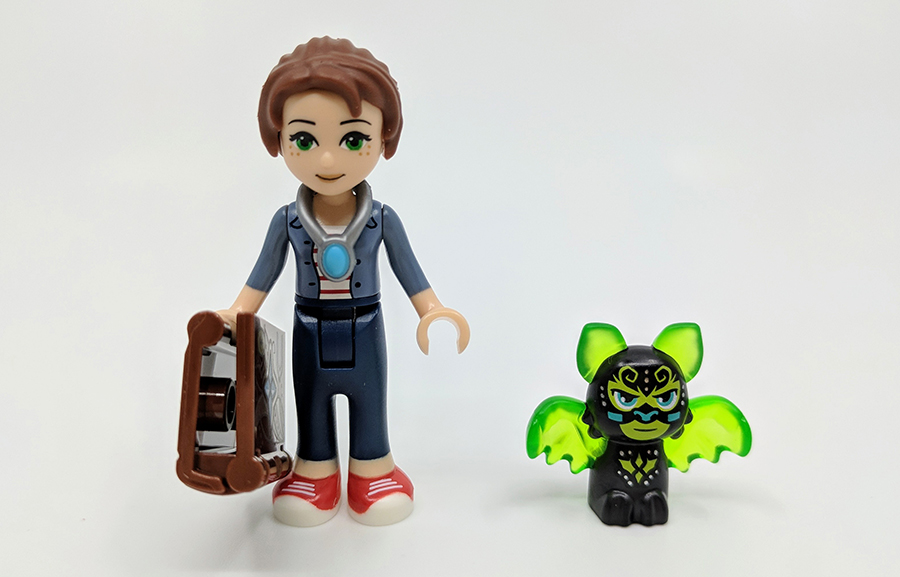 It may be a small set, but it contains some cool and rare elements not to mention the set exclusive pieces. Lumia is the best part of the build thanks to the use of colours and general look of it. The cave section also has some nice elements, although looks a little like a random build. One of the best things about the Elves sets in general, including this one, are the range of colours used; especially the fluorescent bits. These really help to enhance the enchanted feel of the Elves story driven elements. Something which has inspired our first ever build contest – Elemental Elves. Learn more about the build contest here. Set 41190: Emily Jones & the Eagle Getaway set is available now exclusively from Argos in the UK, LEGO Brand Retail Stores and shop.LEGO.com. The opinions express within this review are those of BricksFanz and do not reflect those of the LEGO Group.