Today marks the 1st Anniversary since the portal to LEGO MYTHICA opened at LEGOLAND Windsor Resort. The multi-million-pound expansion to the world’s second-oldest LEGOLAND park is the first to be based on an original theme, created especially for LEGOLAND Windsor. In the realm of LEGO MYTHICA, magically mixed up creatures exist. Within the park, they have inspired the Flight of the Sky Lion flying theatre ride, Hydra’s Challenge and new for 2022, the Magical Forest. But it’s not just epic rides and experiences the new land has inspired, it’s also the inspiration for the latest LEGOLAND set. For a few years now LEGOLAND and LEGOLAND Discovery Centres have offered exclusive sets often inspired by rides in the park. They have included NINJAGO World: The Ride, The Driving School and The Fire Academy. Now visitors to LEGOLAND Windsor can take a little bit of LEGO MYTHICA home with them in the new LEGO MYTHICA set. Thanks to LEGOLAND Windsor Resort, I’ve been able to take a closer look at the set before its June 1st release. 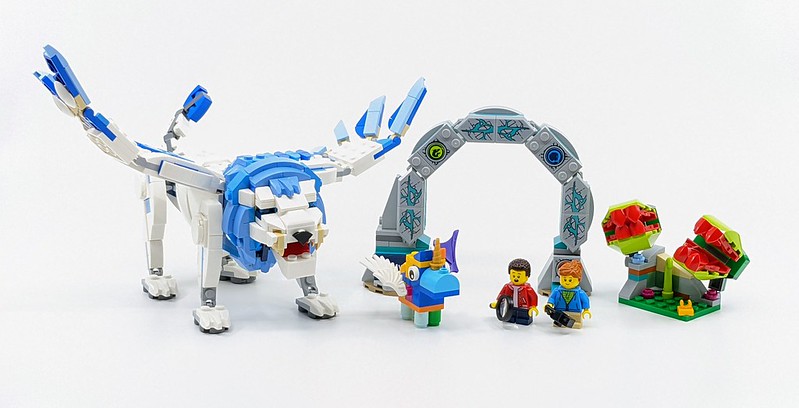 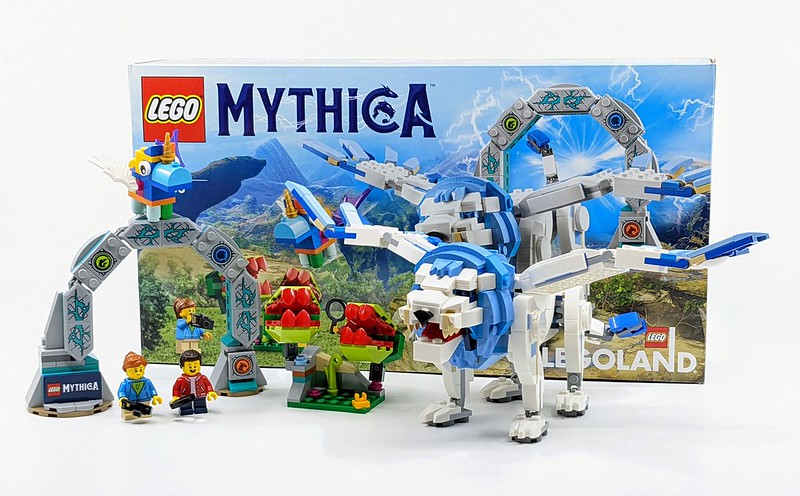 LEGO MYTHICA was introduced to LEGOLAND Windsor Resort in 2021 where it became the first new IP to be created especially for LEGOLAND. Up to that point most areas of the park, as well as those found in other parks, were inspired by various LEGO themes such as LEGO City, LEGO Friends and NINJAGO. The area where MYTHICA now sits was originally intended to be The LEGO Movie Land, but the theming was changed during development and MYTHICA was born. The concept is simple and very much in the spirit of LEGO building, so it’s a parallel realm filled with magical creatures. Although some of the creatures look familiar they are actually blends of multiple animals. The two most famous are Maximus the Sky Lion and the miniature Alicorn, Bitsandbobs. They both feature in this new set.

The set is similar in style to other LEGOLAND exclusives, so its different components are inspired by parts of an experience found at LEGOLAND as well as including some visitors to enjoy them. For the MYTHICA set, the buildable elements include the portal, which leads visitors into the land as well as buildable versions of Maximus and Bitsandbobs along with a pair of giant Venus Fly Traps. Oddly for a set like this, the instructions feature a little background on MYTHICA and the sections found in the set. 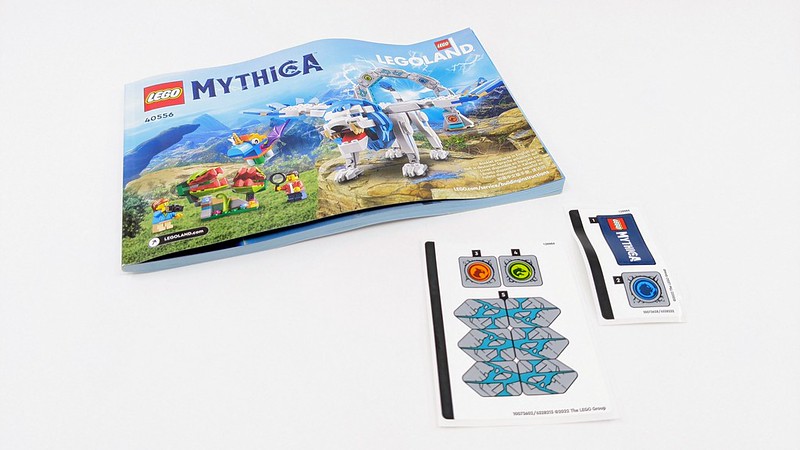 The portal gate is the first thing visitors see as they arrive at MYTHICA. The version in the set is a little less imposing but still looks quite cool. Anytime the NEXO Shields are used in a set, it’s instantly elevated in coolness. Detailing in the portal is via stickers but they nicely recreate the runes and elemental symbols found in MYTHICA, as well as featuring the lands logo. 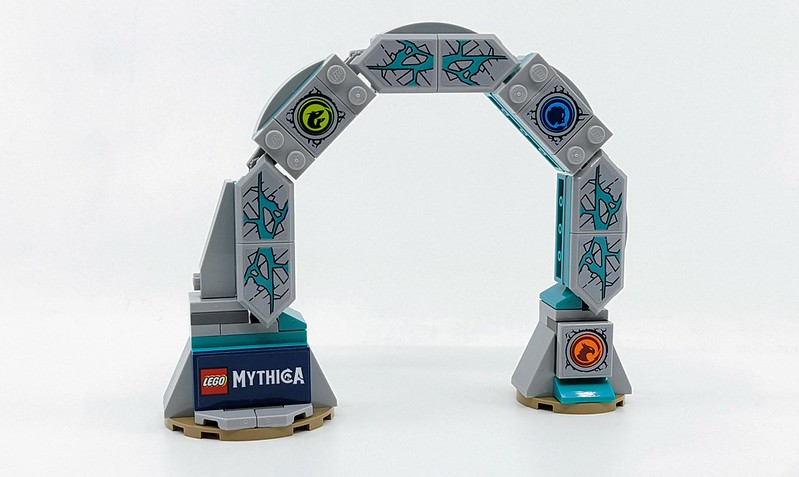 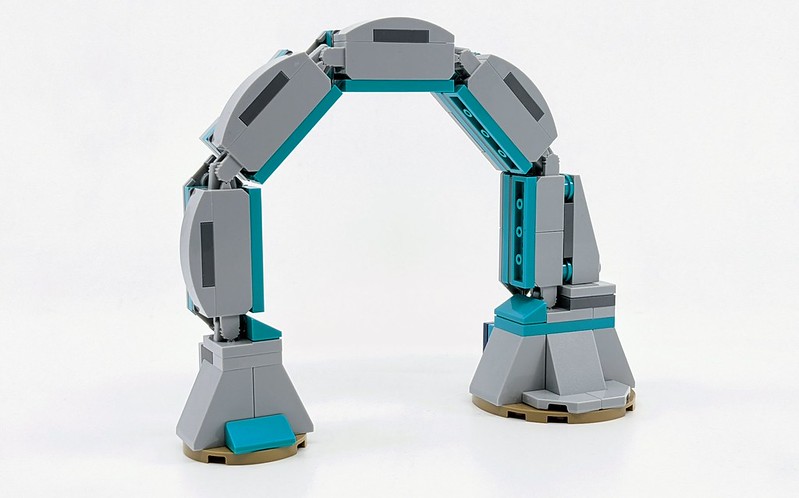 This isn’t the first time Bitsandbobs has appeared in LEGO form. The unicorn-like critter was offered as a Make & Take build at the park last year and its design is inspired by a similar creature found in the 60th anniversary Rainbow Fun set from 2018. As you can see the character is basically a mismatch of colourful elements resulting in a small flying unicorn. The colours are nice and bright, plus the two different wings are a nice touch. 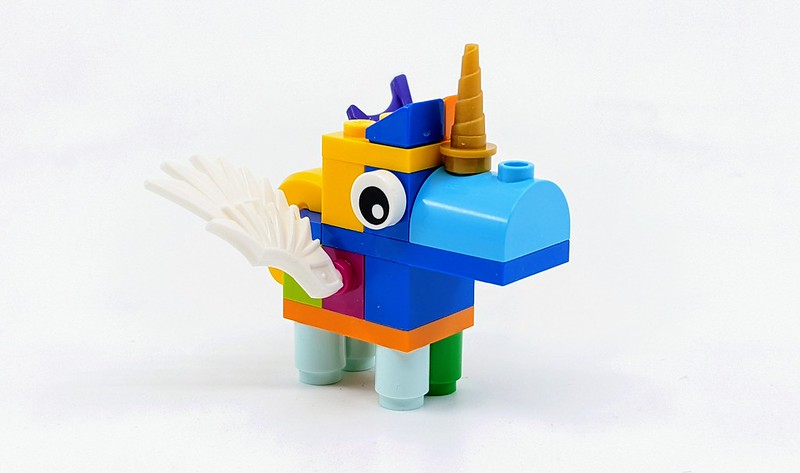 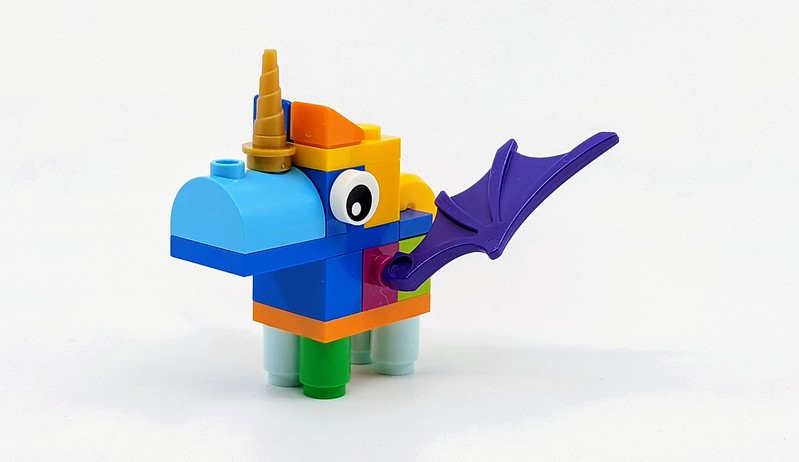 The largest part of the set is the Sky Lion, Maximus. This winged beast presides over MYTHICA as a 600,000 LEGO Big Build on the canopy of the Flight of the Sky Lion ride. This version is a little smaller and has a style very much like a Creator 3-in-1 build. But the mix of white and two different blues results in a unique looking take on a lion. As do the large eagle-like wings. It’s actually a really fun build and uses a couple of interesting elements including a large 1/4 dome and the new 1×1 1/2 bricks. 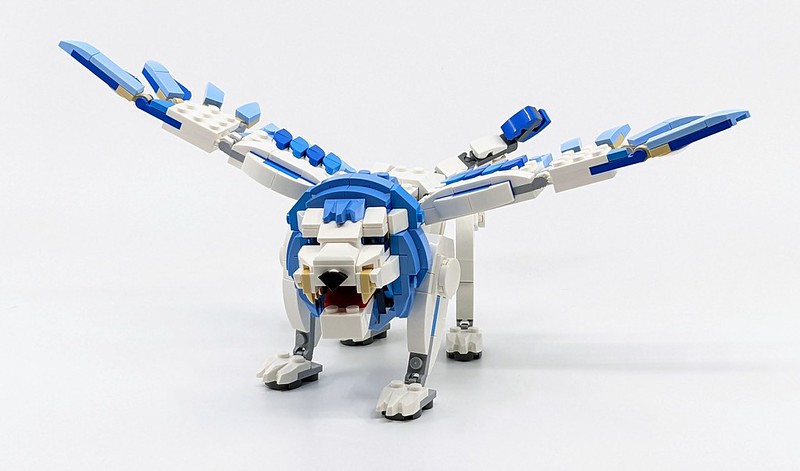 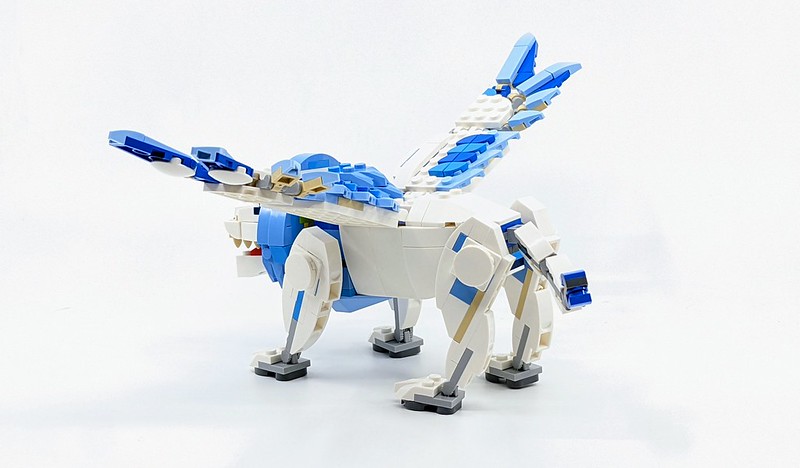 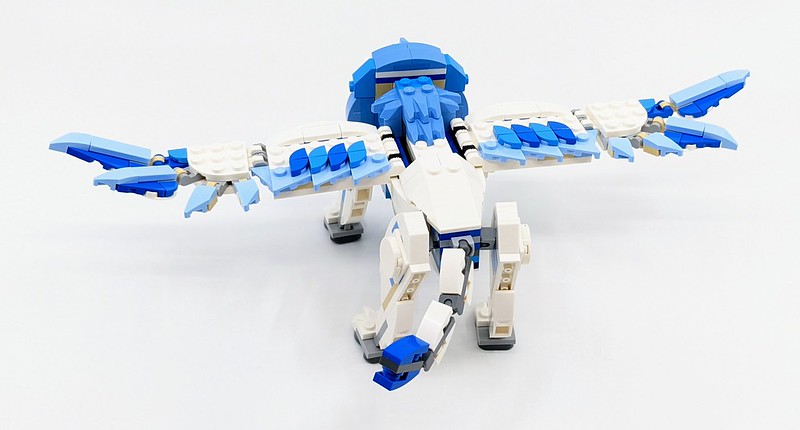 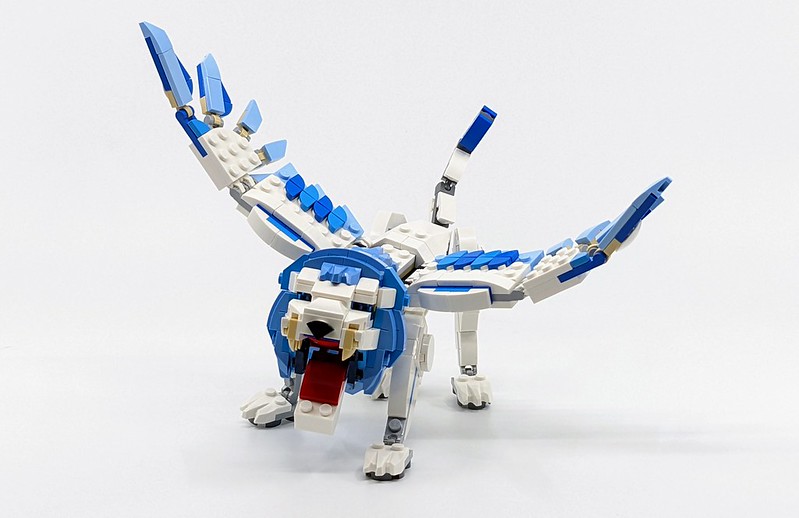 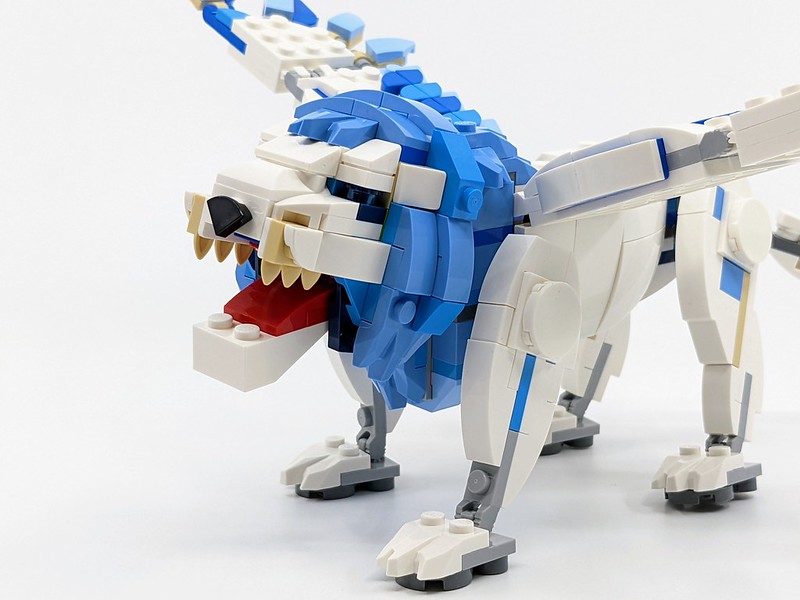 The final buildable element of the set is a pair of Venus Fly Traps. These feature in the new walk-through Magical Forest part of MYTHICA. In fact, as well as brick-built versions, there are also oversized versions of the flytrap pieces used for past LEGO City sets. Oddly, the version in the set doesn’t use those and instead features entirely buildable Fly Traps. Both are built the same and are mounted on a small rocky outcrop. 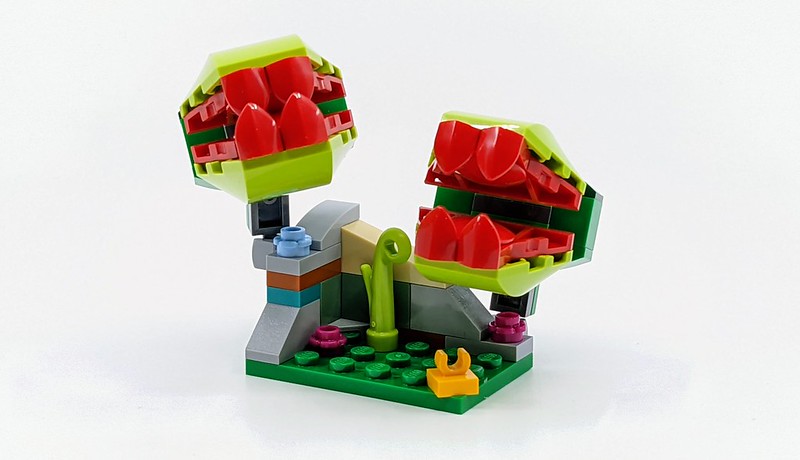 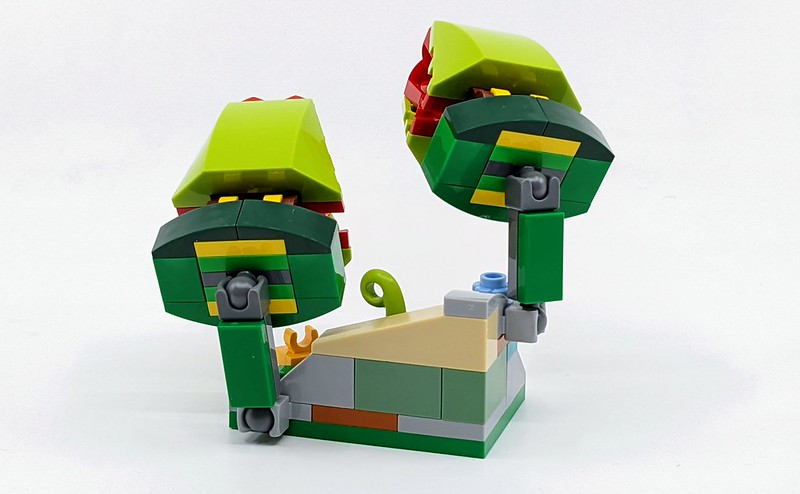 Finally, the set features two minifigures kids. They are both made from commonly available parts so nothing too exciting but I do like the ‘amazed’ face used for the boy. They might not be too exciting but the appeal of the set is buildable elements, not the minifigures however, it’s nice to have someone to explore the realm. 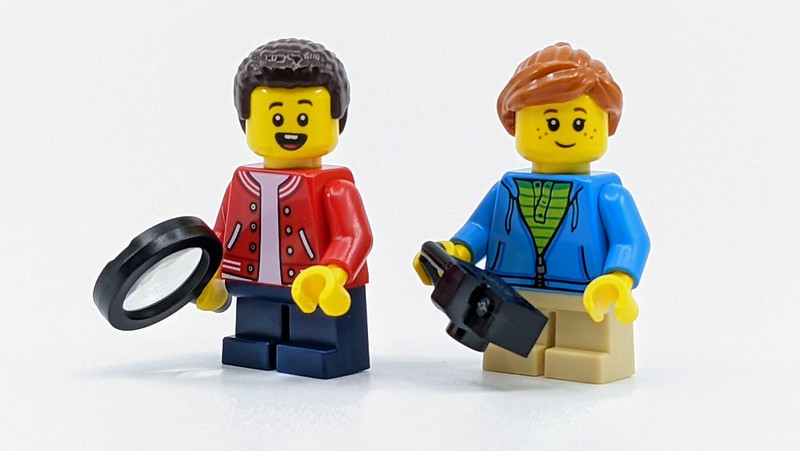 Visiting LEGOLAND is certainly a treat and the desire to mark the occasion with a souvenir is strong with most visitors. A set like this is much more desirable than a pen or a mug. The different parts of the set offer not only a fun build experience but a nice slice of what the land of MYTHICA has to offer as well.

The set has an RRP of £44.99 and it’s been confirmed that the set will be available from all LEGOLAND locations along with LEGOLAND Discovery and LEGO Discovery Centres globally. LEGOLAND Windsor Resort and the world of MYTHICA are open now.

This set was provided to BricksFanz by the LEGOLAND Windsor Press Team for purposes of review. The thoughts within this review are that of BricksFanz and do not reflect those of the LEGO Group or Merlin. Providing a set for free does not guarantee a favourable opinion of the set.