The combination of the LEGO® brand and Disney has been a long-running one. In fact Disney’s Pluto was one of the first licensed characters to inspire a LEGO-made wooden toy. More recently, Disney Parks have also inspired sets such as the Disney Castle and Train Station. To celebrate the 50th Anniversary of Walt Disney World, last year a mini version of the park’s Cinderella Castle was created and it must have proved popular enough, as another iconic part of Disney Parks has been shrunken down into a mini-set. This time it’s the spook-filled Haunted Mansion. Here’s an early look at this upcoming new Disney-themed set before it’s released on August 1st. 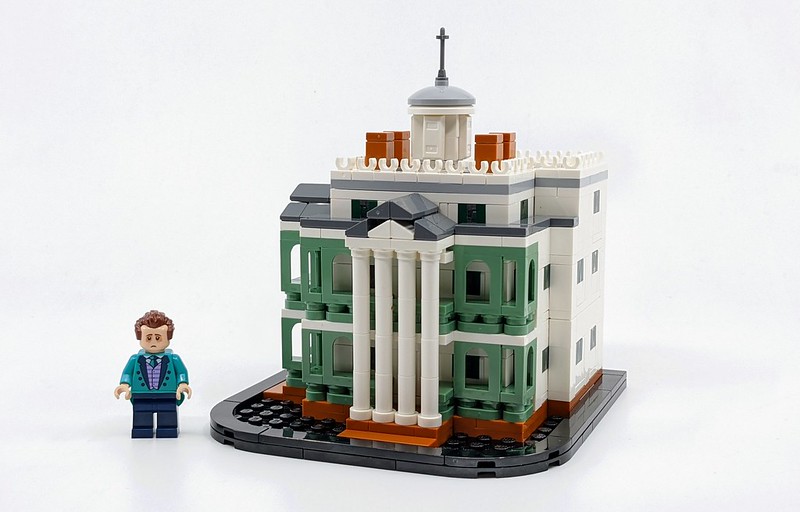 Fans of Disney’s The Haunted Mansion ride will love all the scary-good details in this miniature build-and-display model. Part of the interior is viewable from the back, including the dining room, a chandelier and a gallery. The set includes an exclusive Butler minifigure to add to the display. Fans will recognise paintings of the Hitchhiking Ghosts, Madame Leota and the Gravekeeper. This buildable set makes a perfect gift for miniature collectors and Disney fans of all ages. 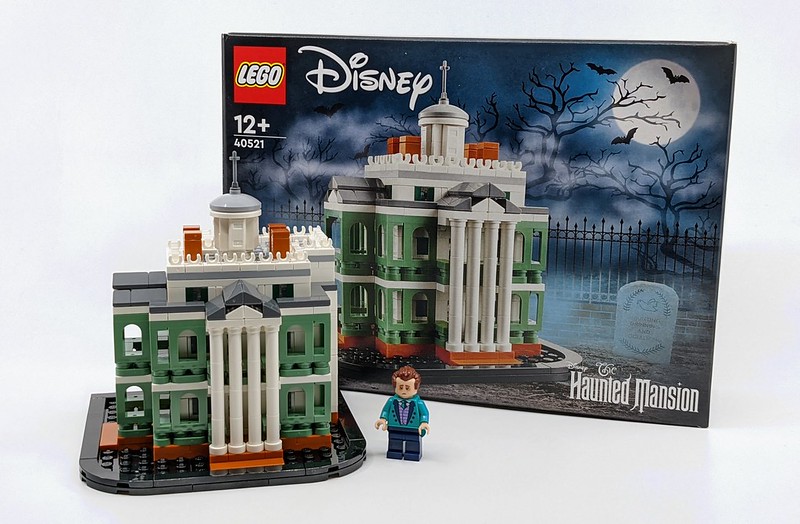 Disney Parks have a large number of iconic attractions and one of the oldest and most beloved is The Haunted Mansion. Located in the New Orleans Square area of Disneyland, Anaheim, from its exterior, The Haunted Mansion doesn’t scream spookiness. It was originally designed as the quintessential haunted house, falling apart and left to ruin, a perfect place for ghosts to dwell. But Walt Disney didn’t want a rundown building sitting in his new theme park. So the building which contains the ride looks as perfect as the day it was built. Once inside things are very different, visitors take to Doom Buggy as they journey through the Mansion and meet some of its inhabitants. The ride has also inspired a movie, a Muppets Disney+ special and versions in other Disney Parks. It’s the original Disneyland version of The Haunted Mansion which has inspired this new set. 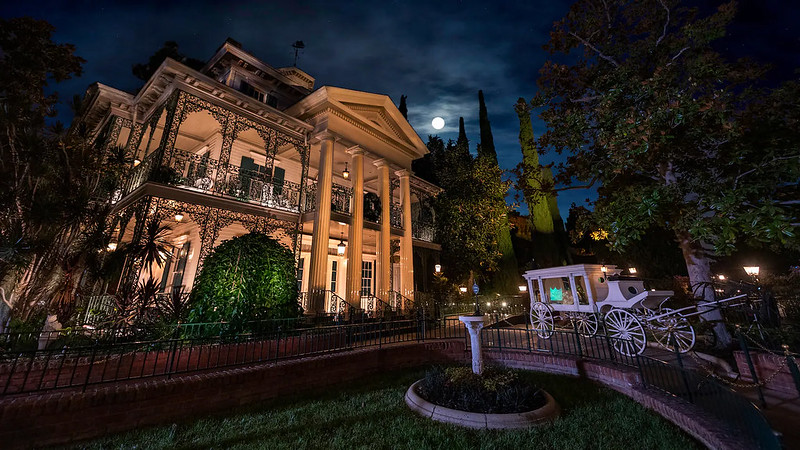 One thing I was surprised about when I opened the set was how many bags it contains. There are nine in total, which feels a lot for how big the finished build is. But due to the microscale nature of the building, it does use a lot of small elements. You build the set from the base upwards, with the plate the Mansion sits on being the same style as the Mini Disney Castle. This is a really nice touch as it makes both sets feel like they are part of a series of sets. 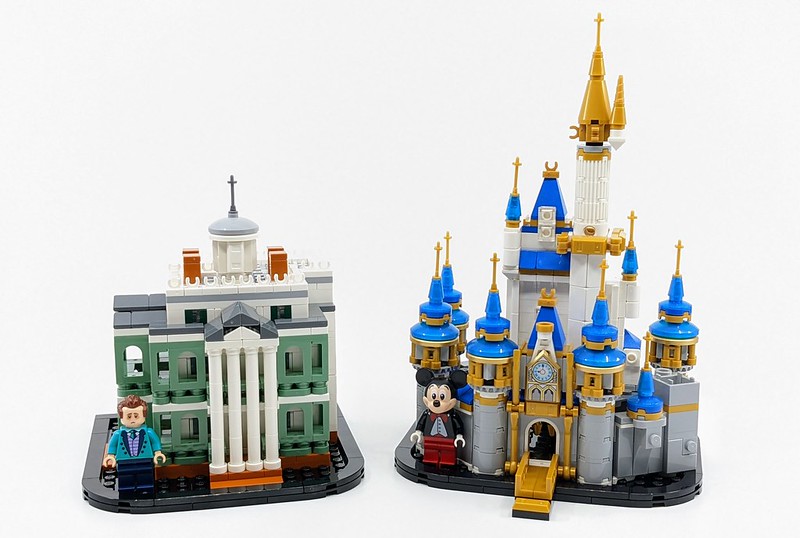 Obviously capturing the ride aspect of The Haunted Mansion isn’t easy, especially on such a small scale. But the effort has been made to at least show part of the interior of the ride. Around the back of the Mansion is an open section, which spreads across two floors. This shows a hallway and the famous Ballroom, complete with a few waltzing ghosts. Here you will also find a set of five portraits. These are 1×2 plates with stickers creating the painting images of such spooks as the Hitchhiking Ghosts, Madame Leota and the Gravekeeper. They are a little hidden behind other details found in this section but they are a nice link to the ride. 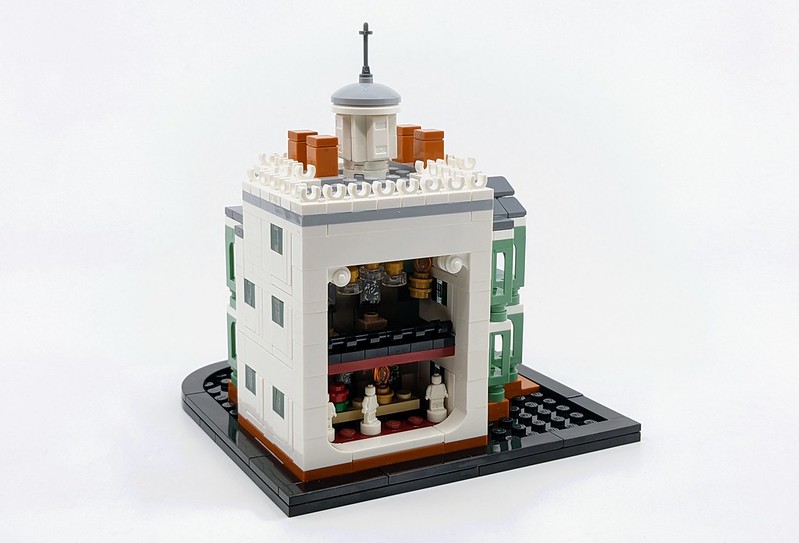 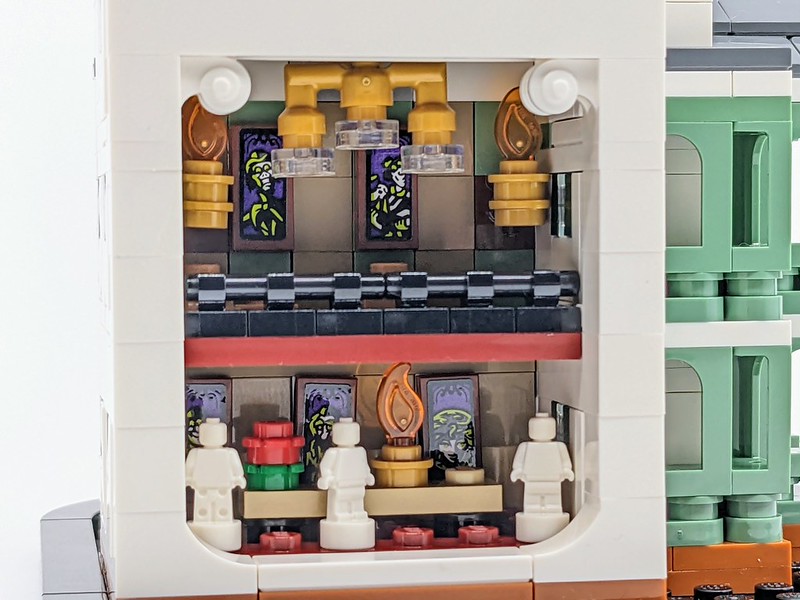 With The Haunted Mansion being recreated as a micro-scale building, it has some interesting details, which are achieved in quite simple ways. Single 1×1 elements can be a little fiddly to place especially when there are many to add, but they do create a great-looking set. It is a little compact, which does mean some of the detail is masked, especially the inner part of the building, which is a little lost behind the sand green window plates. But overall the set manages to capture the overall appearance of the iconic facade of The Haunted Mansions ride. 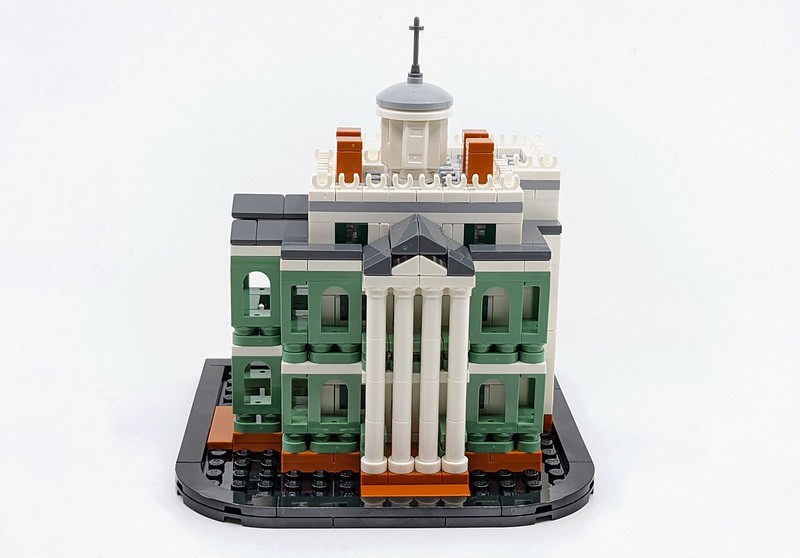 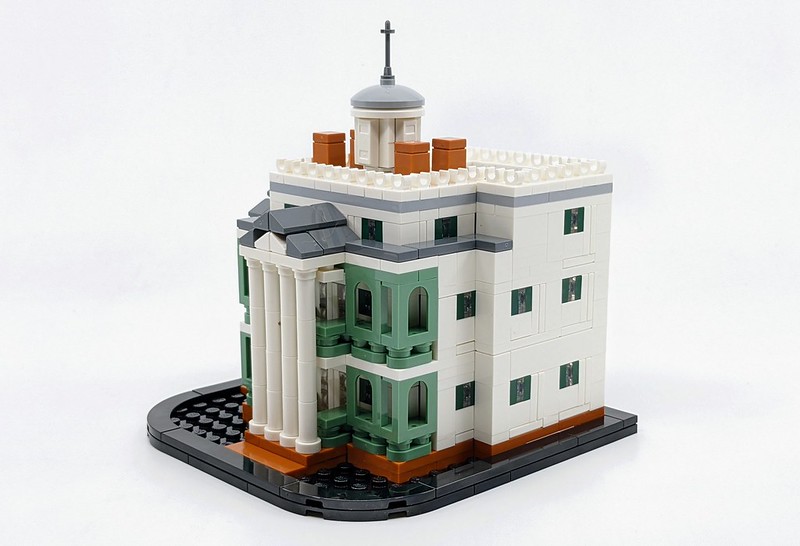 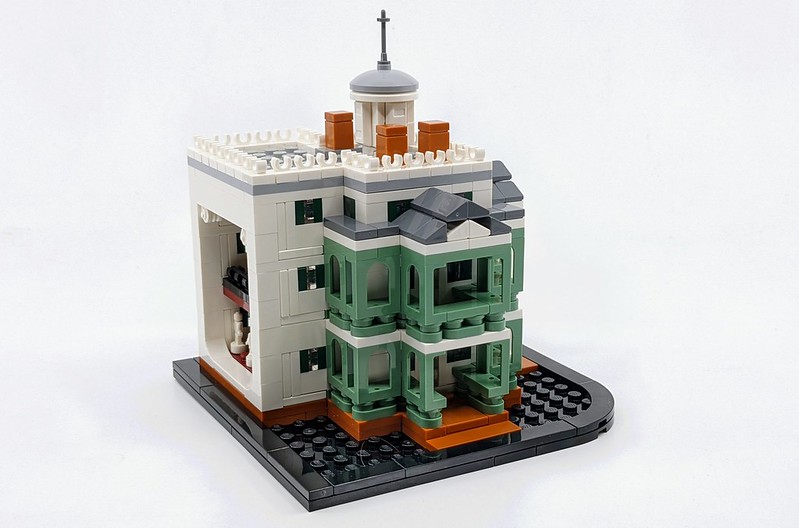 The set also includes a minifigure, unlike the Mini Disney Castle, it’s more of a generic character simply known as the Butler. He wears the same outfit many of the Cast Members running The Haunted Mansion wear. A simple outfit was recently worn by Will Arnett in the Muppets Haunted Mansion Disney+ special. This isn’t the same character he plays but the sullen-looking expression of the minifigure matches the sombre humour the ride is famous for. It has a unique torso and also uses a material piece to recreate the tails on the butler jacket. 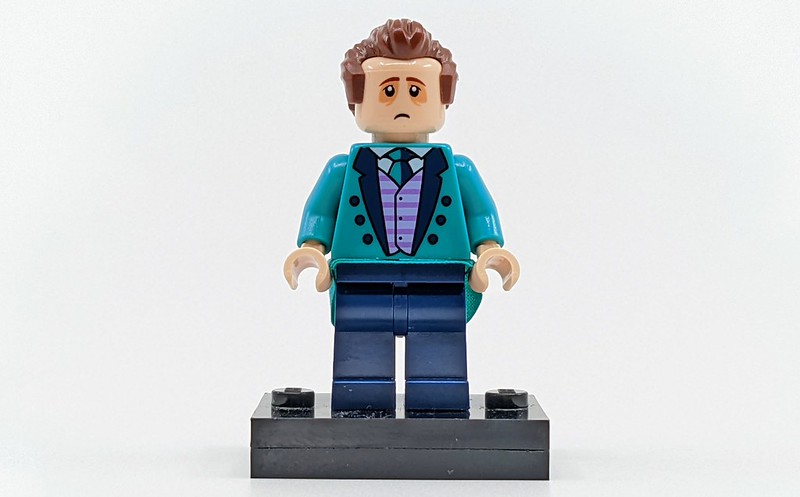 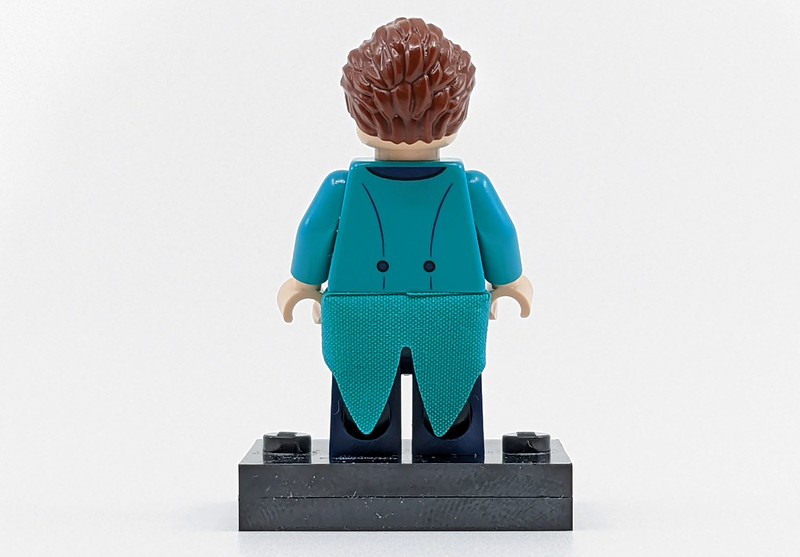 Disney Parks along with the rides and attractions found within them are as much a part of the Disney magic as the movies, TV shows and characters. As impressive as the larger-scale sets are such as the Disney Castle, these smaller sets are a nice way to celebrate a different aspect of Disney fandom. I love that it matches the style used for the Mini Disney Castle, hopefully, it now means we could see further Disney rides becoming mini sets. If I was a visitor to Disneyland and had just been on The Haunted Mansion ride, if I saw this set in the gift shop, it would make a great memento of my experience. The only downside of the set is the stickers used for the painting. They are very annoying to apply and look iffy is they aren’t applied correctly.

– A little compact
– Stickers are annoying to apply