It’s amazing to think that back in 2018, rumours had assigned the LEGO® BrickHeadz theme to the great retirement village in the sky. Yet, three years on the theme is still going strong with well over 100 sets and plenty more still to be released this year. Some of the most popular BrickHeadz sets have been based on the Wizarding World of Harry Potter. Now the range is set to expand with two brand new sets. Unlike many other sets, the latest two Wizarding World BrickHeadz sets include multiple characters, some of whom have appeared in past sets and others that are all-new. Not only are we getting the first look at these new set, but they are also subject to my latest LEGO set review.

Set 40495 includes new versions of Hagrid, Harry, Ron and Hermione, all of which play around with the standard BrickHeadz format. The other set 40496 includes Lord Voldermort, Nagini and Bellatrix Lestrange, so here’s a closer look at each set. 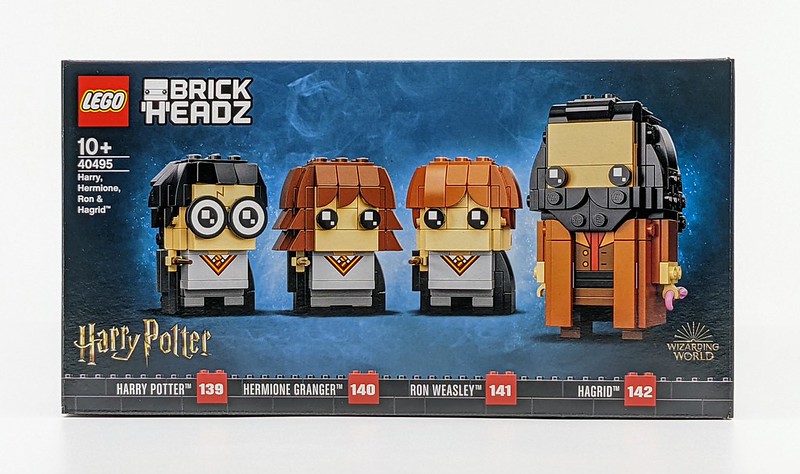 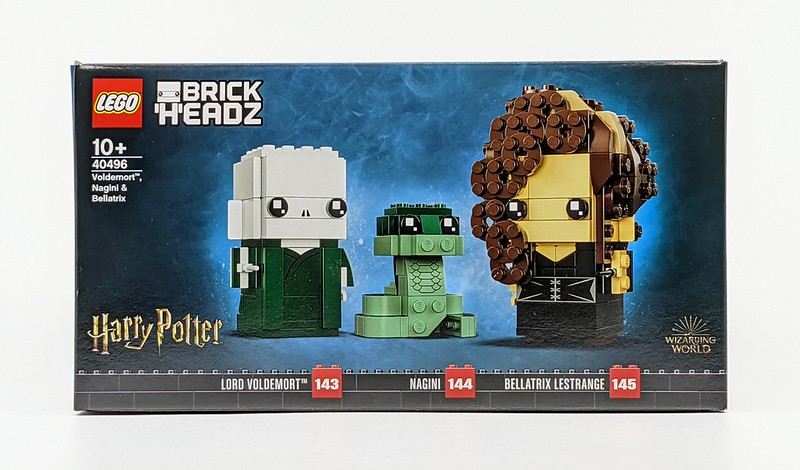 By now you should be familiar with the LEGO BrickHeadz format. This transforms iconic characters into a highly stylised cubic build. The basic design of a BrickHeadz character is similar across the range, but there have been a few tweaks to the format over the years. This has included smaller characters dubbed Buddiez and more recently, we’ve seen more creatures, which further play with the familiar design.

All four of these characters have appeared in BrickHeadz form before, but these new versions are very different. Hagrid is the most similar but he wasn’t readily available as he appeared in a gift with purchase double pack with Buckbeck last year. Although he largely looks the same, it features various differences. For example, the head has been crafted differently with more curved elements used for the hair. He’s still slightly taller than most BrickHeadz, in fact, this new Hagrid appears to be a little taller than the GWP version. This is likely aided by the new printed brick used in the body section. He still has his pink brolly, the beard is the same and his overcoat is fashioned in a similar way, just in a different colour. 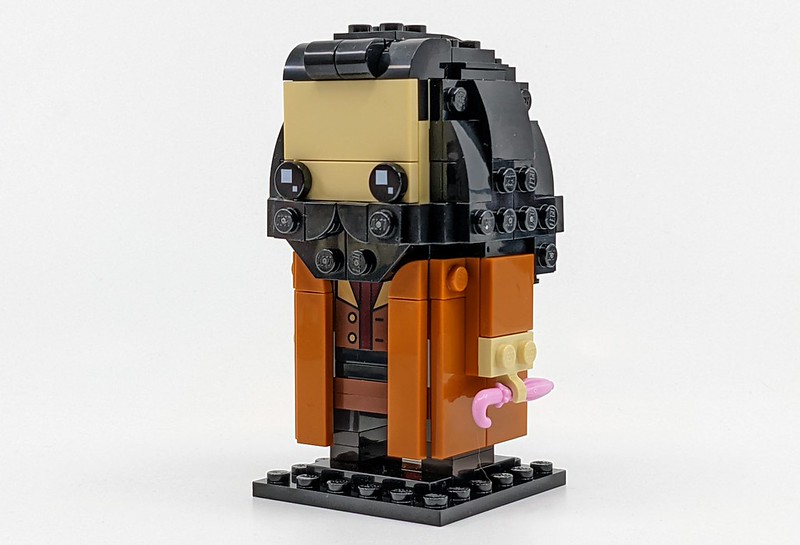 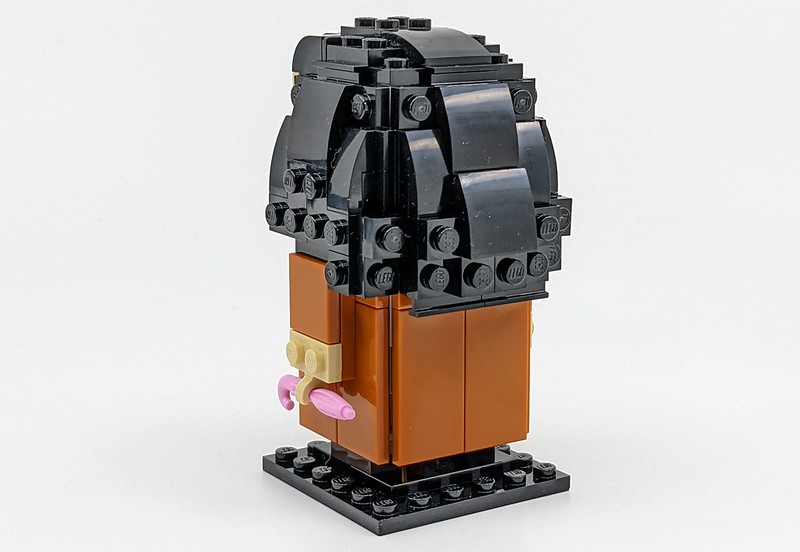 Harry, Hermione and Ron have also appeared in BrickHeadz form before, but they were featured in the standard BrickHeadz size. These new versions are much smaller, I guess to represent their younger selves. Many years ago I spoke with the designer of BrickHeadz sets at a LEGO Harry Potter event and he revealed that the smaller BrickHeadz characters were internally referred to as Buddiez. They are basically half the size of a standard BrickHeadz character, and of course, have that unique BrickHeadz style but they are built slightly differently. All three of the students have the exact same build for the bodies, with a printed brick used to recreate the Hogwarts jumper. 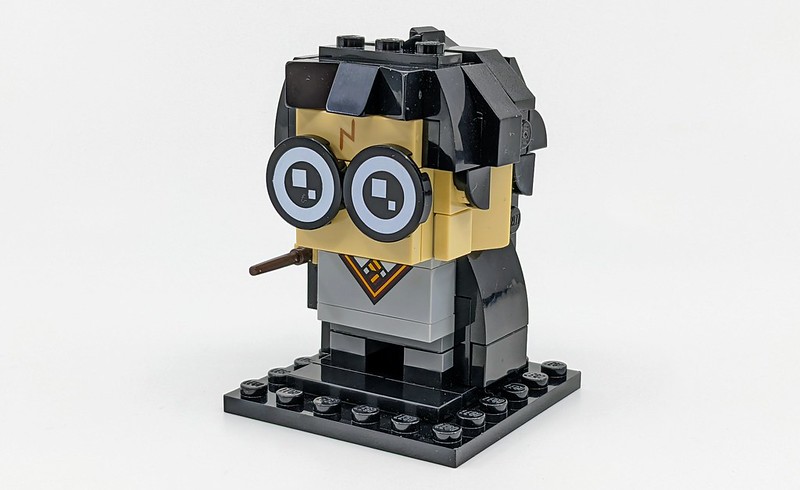 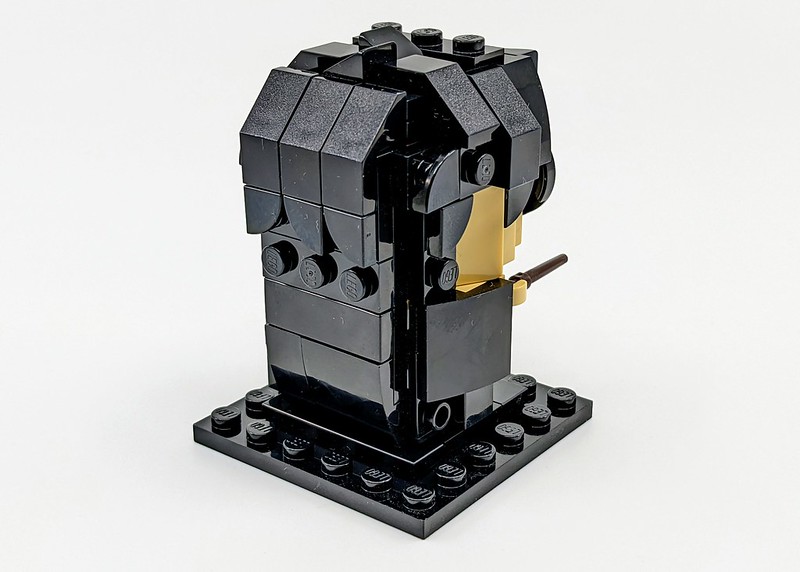 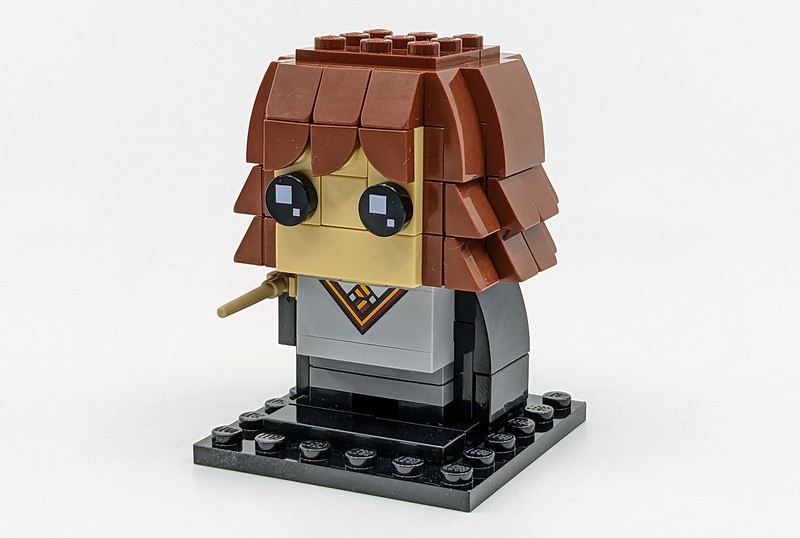 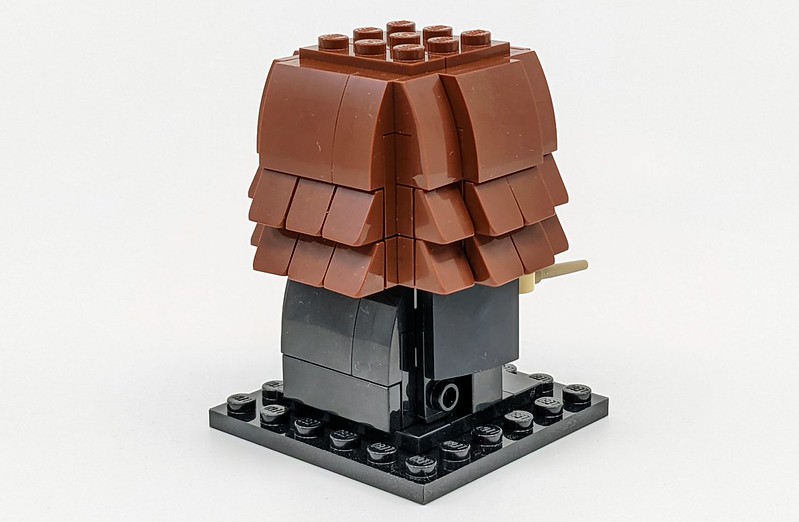 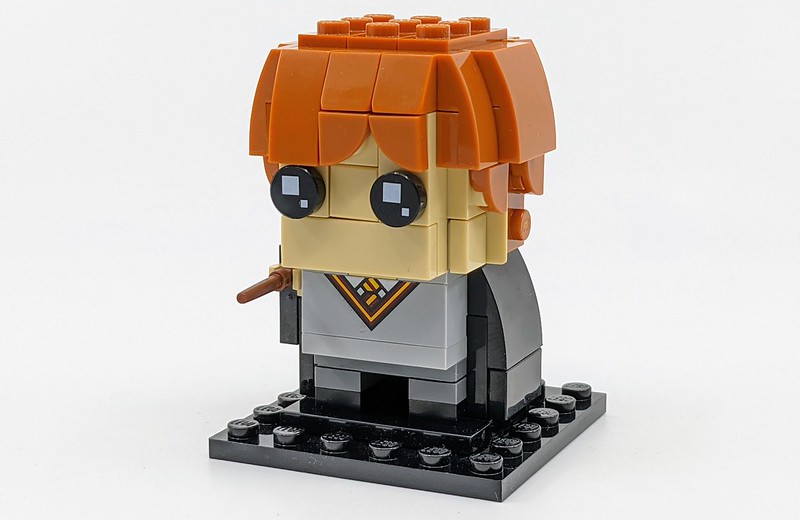 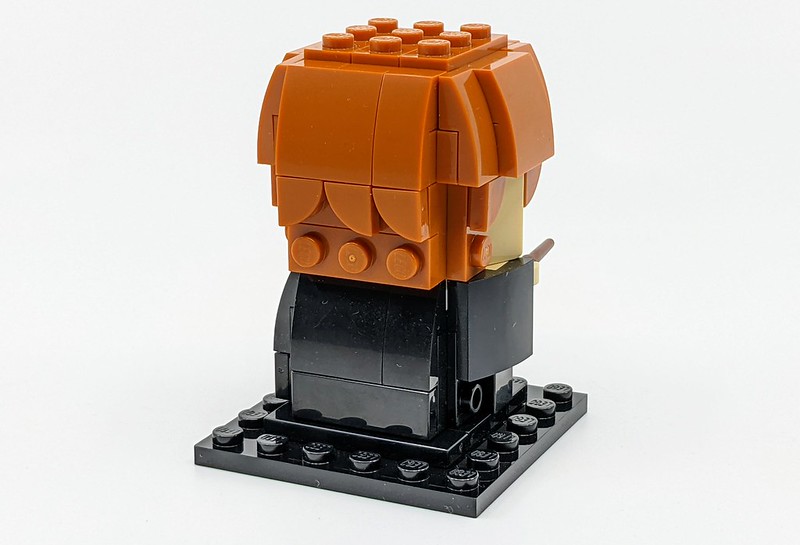 One of the biggest differences you’ll notice is with young Harry Potter. His previous BrickHeadz form combined the classic BrickHeadz eye tile with a newly recreated glasses element and it worked well for the look of the character. The same set up can’t be used here due to the smaller scale of the build. So to create Harry’s specs a new 2×2 round tile is used, it’s also used in the Minions sets. Although the eye print is the same design as the standard 1×1 round tile, it’s ever so slightly bigger. This gives Harry an odd wide-eyed look. Apart from that, each character looks great, I especially like the new smaller versions of the previous characters. They offer something much more unique compared to the slightly tweaked design of Hagrid. 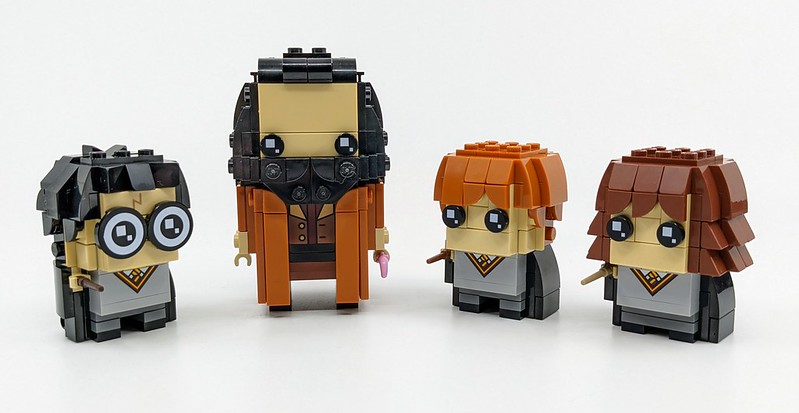 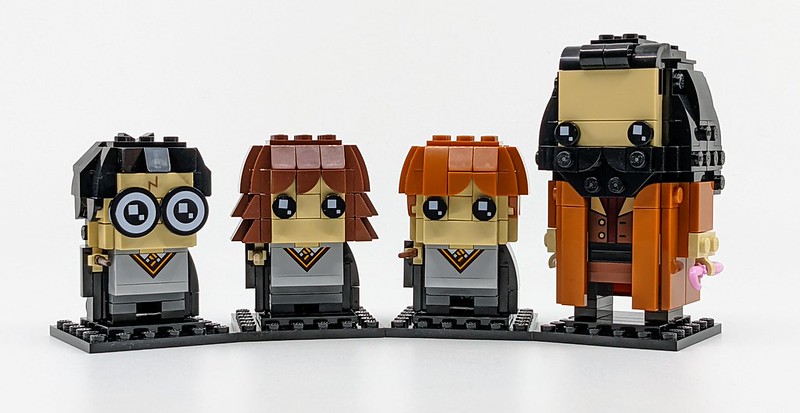 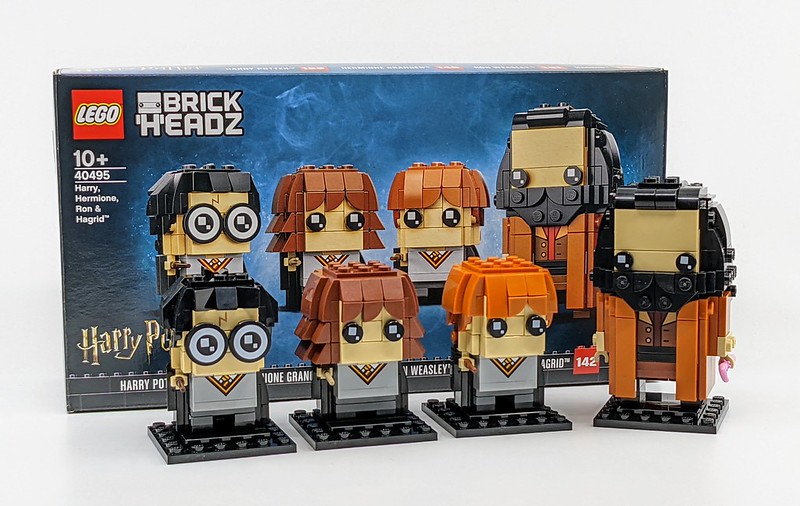 Whilst the set above reimagines previously released BrickHeadz characters, this second set features a trio of all-new characters. These include two standard sized BricksHeadz and a completely unique creature BrickHeadz. I’m surprised we haven’t seen a BrickHeadz set featuring he who shall not be named before now. Voldemorts featureless head is most similar to the blank BrickHeadz mascot. The combination of a printed section for his nose and those classic BrickHeadz eyes perfectly recreated Voldemort’s menacing appearance. His dark green robes are fairly simply built, with a printed brick used to craft his tunic. 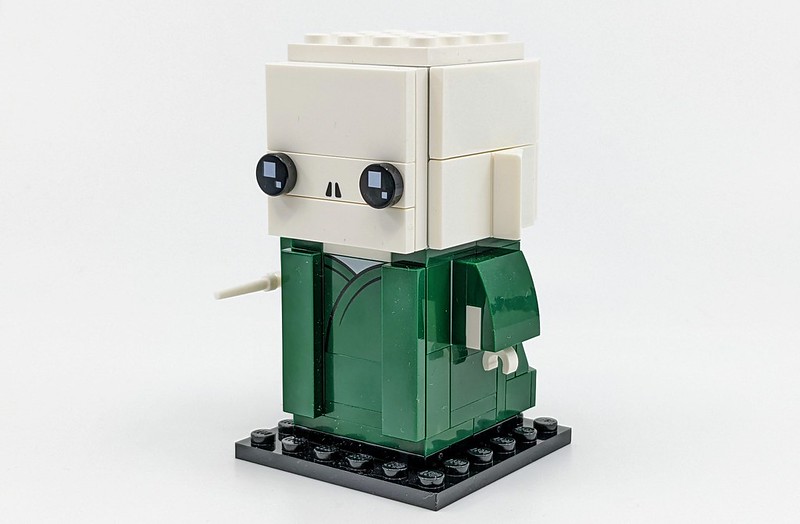 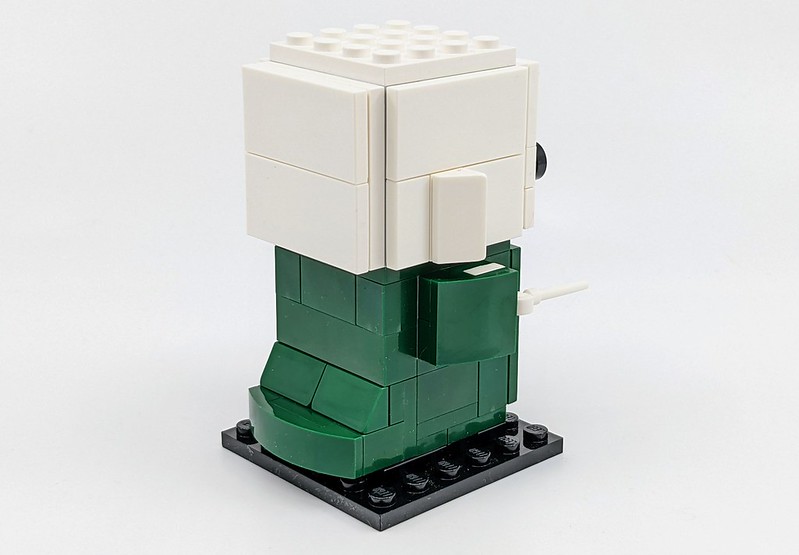 Before appearing in human form in the Fantastic Beasts films, Nagini is better known as the snake Horcrux of Lord Voldemort. This is also the form Nagini takes in this BrickHeadz sets. Although similar to the other smaller BrickHeadz characters, in order to recreate the snake body of the Nagini, it is a totally unique build. The core of the body is used to place the head, which is connected with a Technic axle. In order to achieve the winding tail-like body of Nagini, a couple of curved sections of also connected to that central core. I love this build, it’s so simple and something different for the BrickHeadz line yet stays true to the unique design aesthetics. 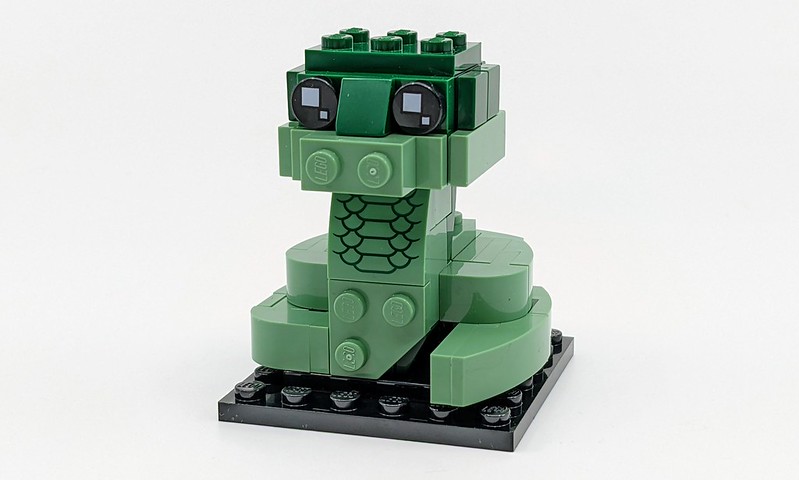 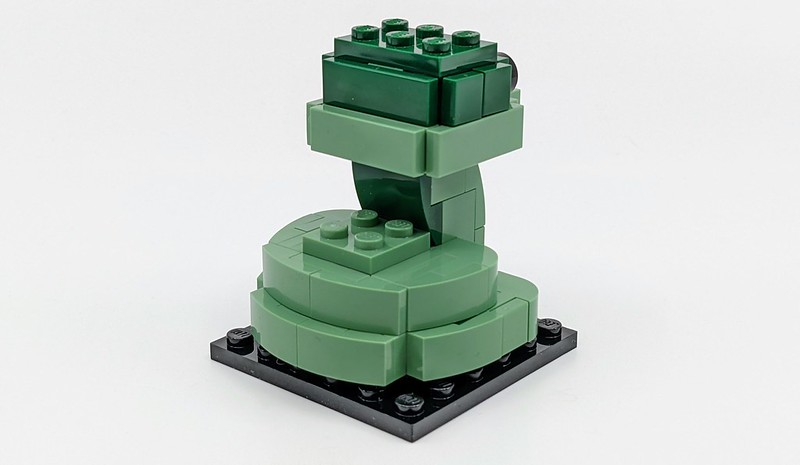 There have been many different characters transformed into BrickHeadz over the years, each one employing different build techniques to achieve their respective looks. But Bellatrix has to be the most complex and detailed of them all. Much of her build is focused on her wayward hair. A mass of 2×2 round plates are combined to craft her messy beehive hairstyle. These are all connected surprisingly securely and the result of them all is quite impressive. In comparison, her body is quite linear, although there is a section that is quite neat. Her bosom area is created from elements, with a pair of cheese slope elements inverted and connected to the body with a Technic axle piece. This could have simply been achieved with print detail but I appreciate the use of actual elements instead. 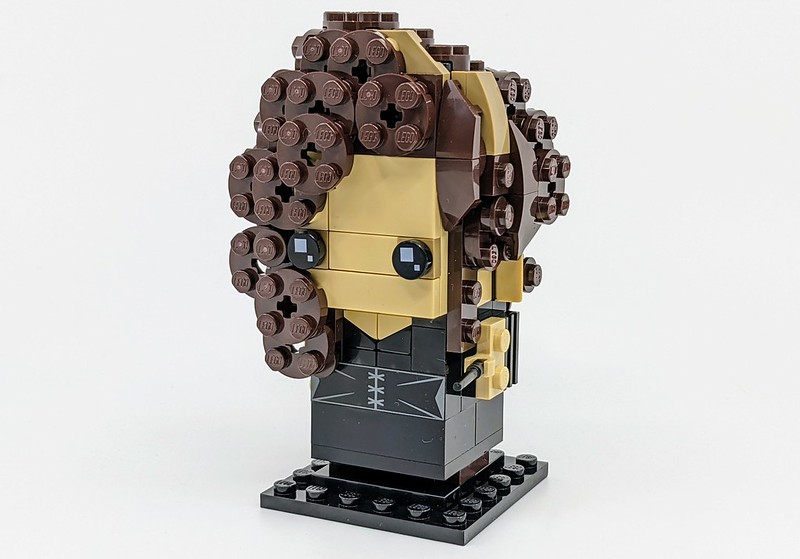 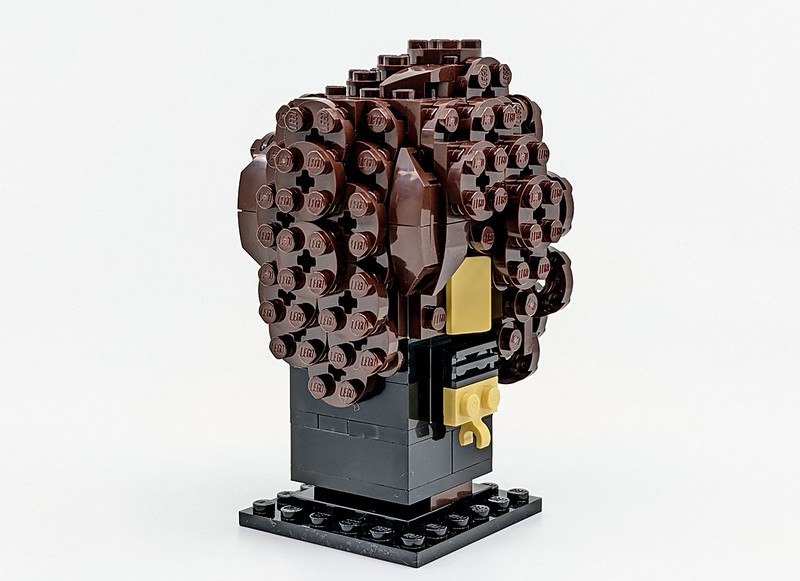 Although Voldemort is very mundane compared to the other two characters in this set, the unique visuals are the perfect fit for the BrickHeadz style. But the other two characters are a great example of how versatile the BrickHeadz sets can be. Nagini works perfectly in this smaller form and I like how it been designed much differently from other smaller characters. But the star of the set has to be Miss Lestrange, the combination of elements to recreate her wild hair is outstanding and one of the best BrickHeadz builds yet. 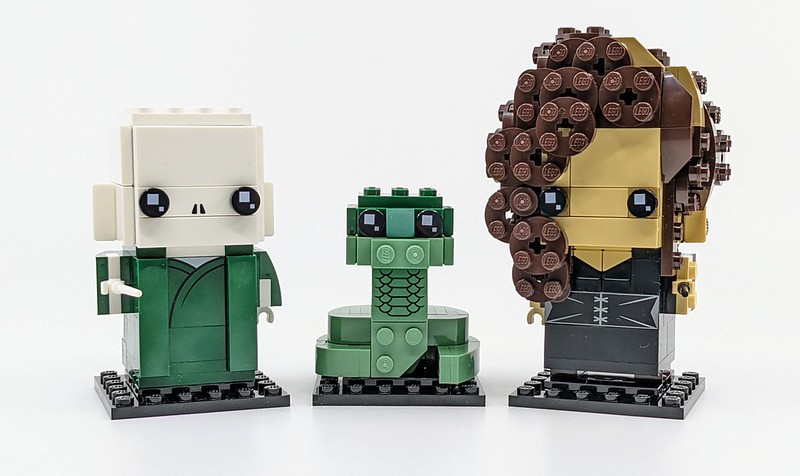 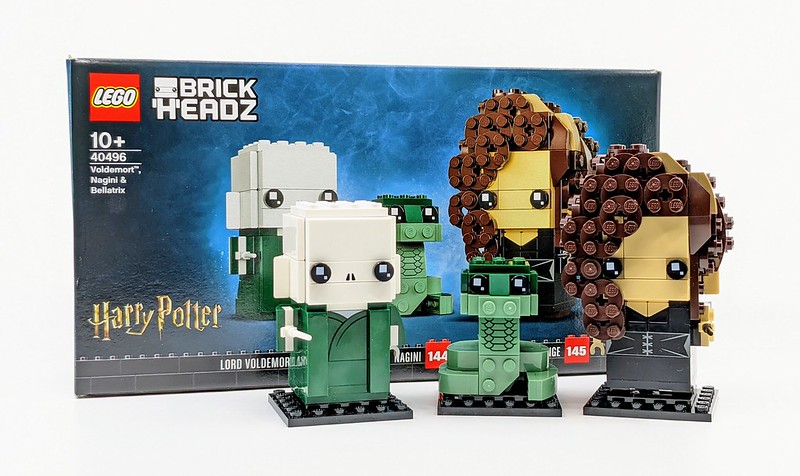 Although no official details regarding these sets such as pricing and piece counts have been provided, they will be available from LEGO.com and LEGO Stores from June 1st. From what I understand they are not GWP sets and will simply be available to purchase.

These sets were provided by the LEGO Group for purposes of review. The thoughts within this review are that of BricksFanz and do not reflect those of the LEGO Group or Warner Bros. Providing sets for free does not guarantee a favourable opinion of the set.