Long before the introduction of LEGO® BrickHeadz, seasonal holidays were often celebrated with buildable characters or mini playsets. This year we have the both of both worlds with a spooky new BrickHeadz set and a mini scene. Halloween has become big business here in the UK, but much of the traditions connected to the spookiest day of the year comes from the US. Which has inspired the Halloween Hayride set. But does this little seasonal build deserve a place in your LEGO collection this Halloween? Read on for my review. 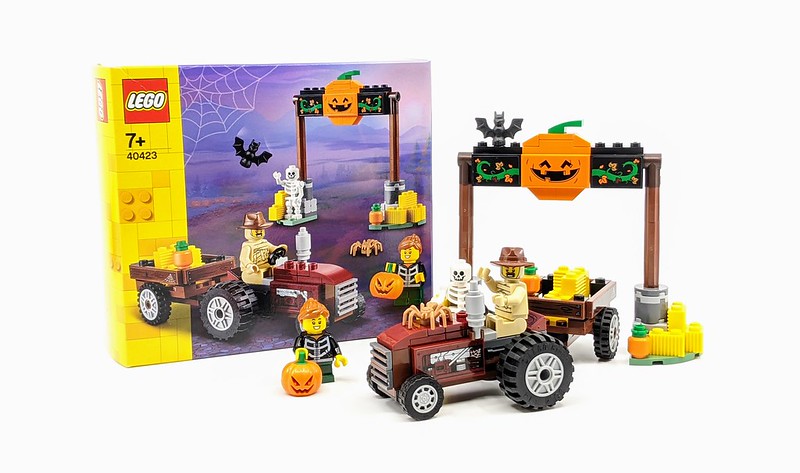 Have fun at the Halloween Hayride (40423) with this awesome LEGO® Iconic building toy for kids. Youngsters can create a festive scene including a buildable entrance arch, vintage tractor, hay cart and lots of decorative details. The set features 2 minifigures with Halloween costume decoration and a skeleton figure for creative role play. An awesome gift idea for ages 7 and up, it also makes a fun, little display piece at a Halloween party. 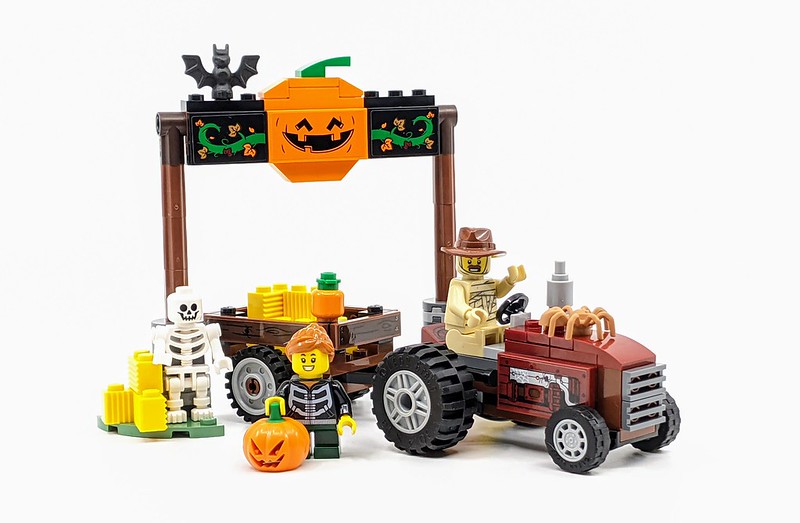 The set comprises of two elements – a Halloween-themed archway and a trailer pulling tractor. The arch is a fairly simple build, with a couple of Technic cross-axis poles mounted a couple of sand green quarter plates. These are both adorned with stacks of yellow profile bricks, which perfectly represent haybales. One side features a Skeleton Minifigure and the other a simple pumpkin. Much of the build is focused on the beam which straddles both poles. A mixture of elements creates a pumpkin-shaped central point, which is enhanced with a sticker on a 2×4 flat tile. Two more stickered tiles finish off the banner. 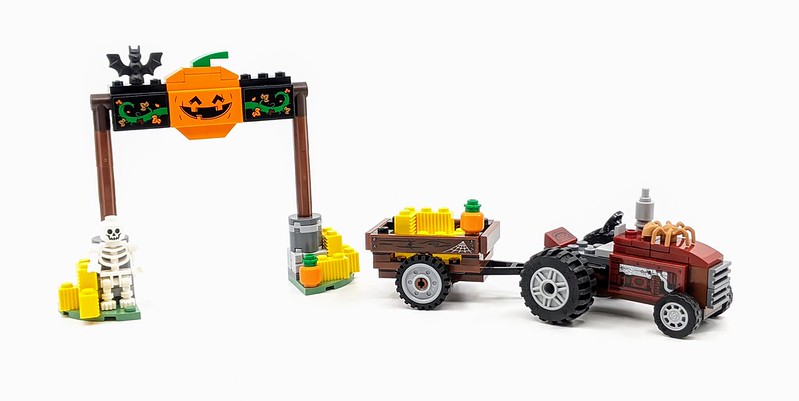 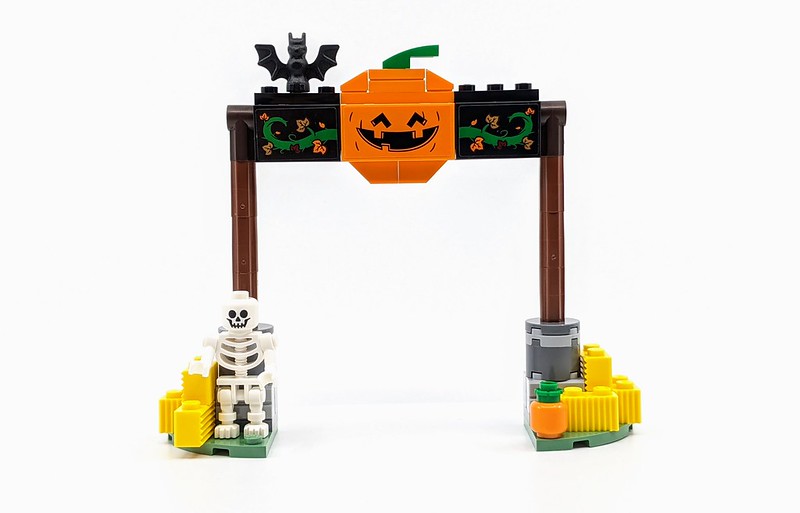 Although the arch is quite funky looking, for me the star of the set is the tractor. Farming equipment hasn’t appeared much across any of the LEGO themes since the farming subtheme of LEGO City across 2009 to 2010. After building the tractor in this set, I’d wish LEGO City would stop focusing so much on Fire and Police, year in, year out. But I’m getting off track, the tractor is primarily made up of dark red elements. This gives it a nice rustic look, which is accentuated by a couple of stickers, showing the insides of the engine. The connecting trailer is nicely done, with a series of 1×1 corner studded bricks and a few flat tiles creating an enclosed trailer, which isn’t bulky. 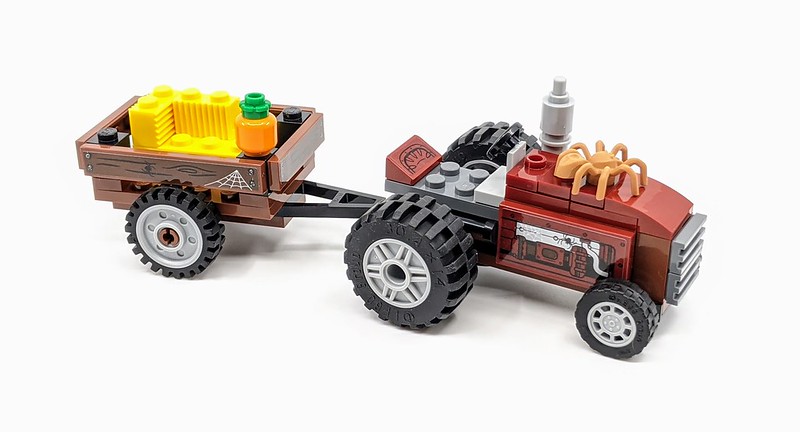 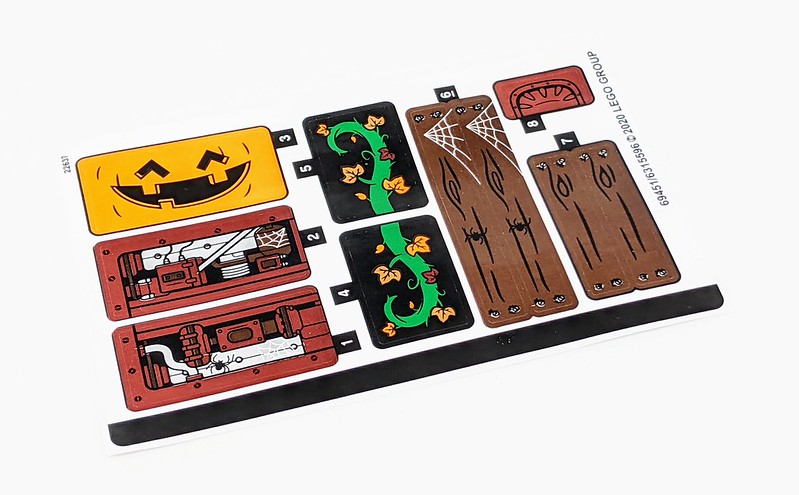 One of the best things about the set is the two Minifigures, both of which feature unique new parts only found in this set. The tractor driver is kitted out in an off-white Mummy costume, with bandages print on both the torso and legs. They also surround most of his head, leaving a little room for his face to peek through. He looks slightly angry looking as well as looking a little like the legendary Ron Swanson, which is why he may a little unhappy to be dressed as a Mummy. The young girl looks slightly look a lot happier and is dressed in a skeleton-themed hoodie. I like how the skeleton bone print matches that of the classic LEGO skeleton, which is also included in the set. 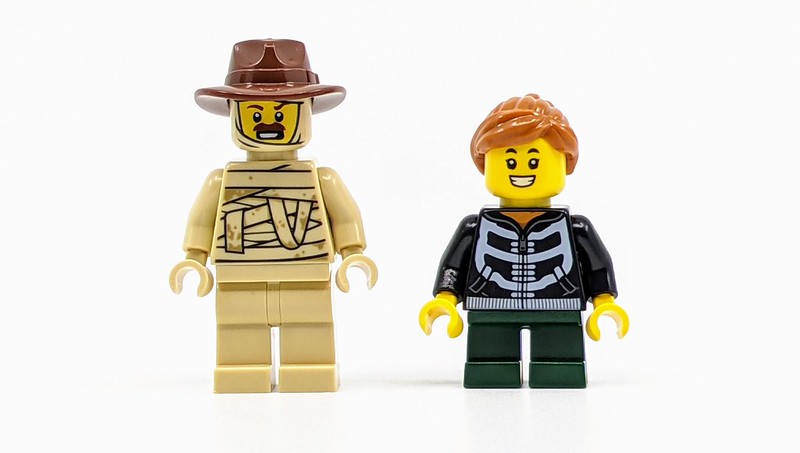 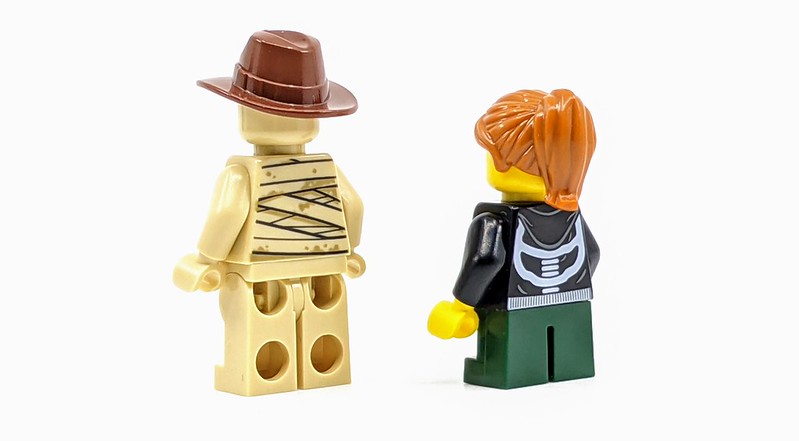