LEGO DOTS have been somewhat of a surprise hit. This funky new theme has a simple premise, using various 1×1 tiles or DOTS, you can create colour patterns and designs. It’s billed as a arts and craft theme, with wearable bracelets and various home decor items. To promote this new theme, a fun polybag promotion is currently running, which offers a small buildable photo frame. But is it worth shelling out on other LEGO to get this freebie? Let’s take a closer look and find out. 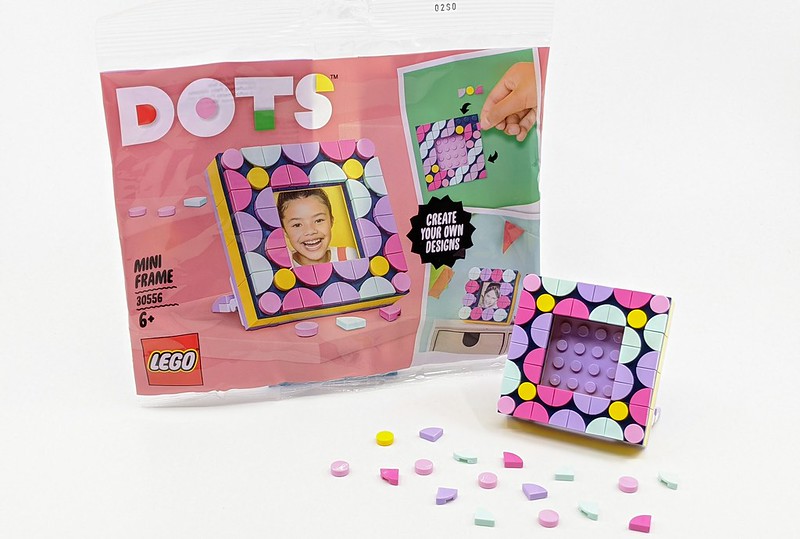 The base of the frame is an 8×8 lavender plate, which hasn’t appeared in many other sets. There are a couple of hinged kickstands on the back which help to stand the frame up. The rest of the frame is built in four pieces. There are two 8×2 panels, which run across both the top and bottom of the frame and then two 2×4 panels. These are mainly created with a series of 2×2 inverted slope bricks. This is what creates the gap, which which you can place a photo or image. The suggested photo size is 4x4cm. The instructions suggest that the top section should be removed to place a photo in the frame, but the two side panels seem to come away from backplate a little easier. 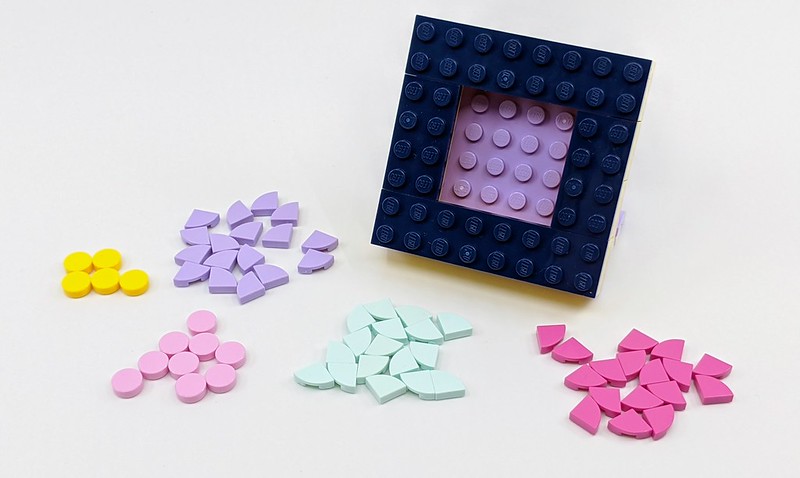 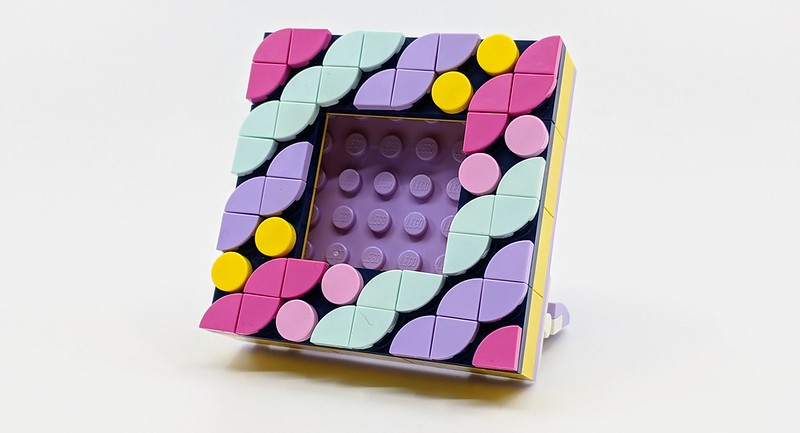 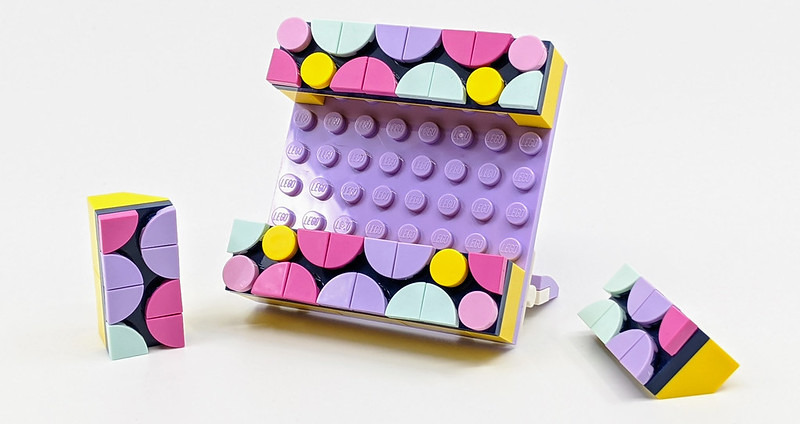 The frame is edged with a usual Earth Blue colour set of plates. I say usually as the DOTS range has a lot of light and pastel colours, but this dark blue looks quite nice once the colour DOTS tiles are added. You get 3 lots of 16 quarter circle tiles, in lavender, bright purple and aqua. Along with light pink and yellow 1×1 round tiles. 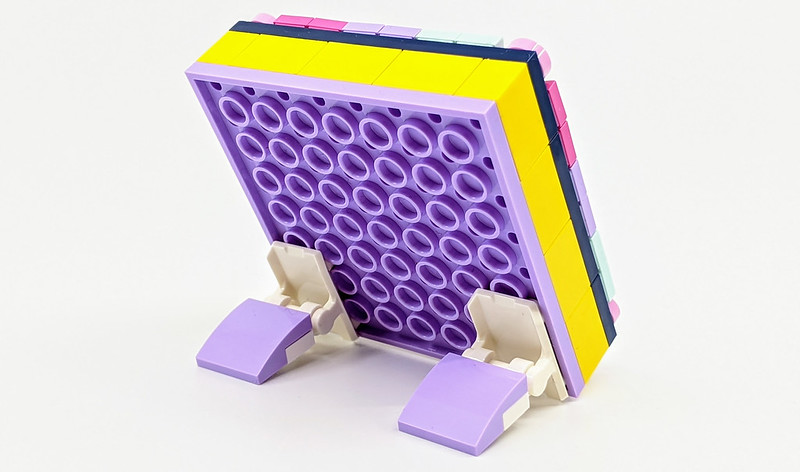 As is the case with all LEGO DOTS products, the key is creative customisation. Although the base frame has instructions, the design you place around it is entirely up to you. There are a couple of images on the polybag, which offer a little inspiration. The polybag also features a number of extra DOTS, so you can jazz up the frame in any way you like. Plus you can use the DOTS from other sets to create even more designs. On the subject of customisation, if you replace one of the 2×2 slope bricks in the bottom strip of the frame with a 1×2 brick of the same colour, you can place a Minifigure in there. Which loves quite fun. 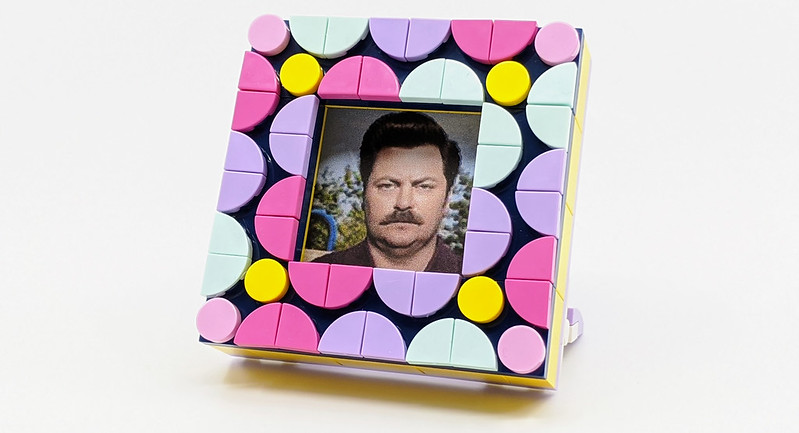 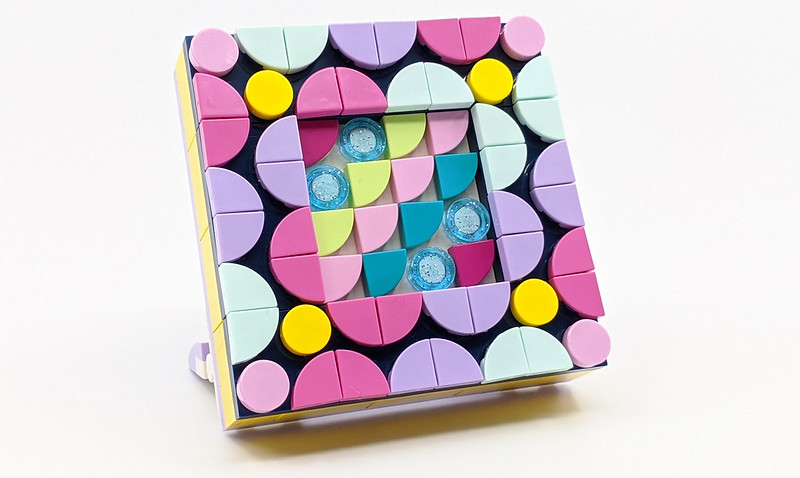 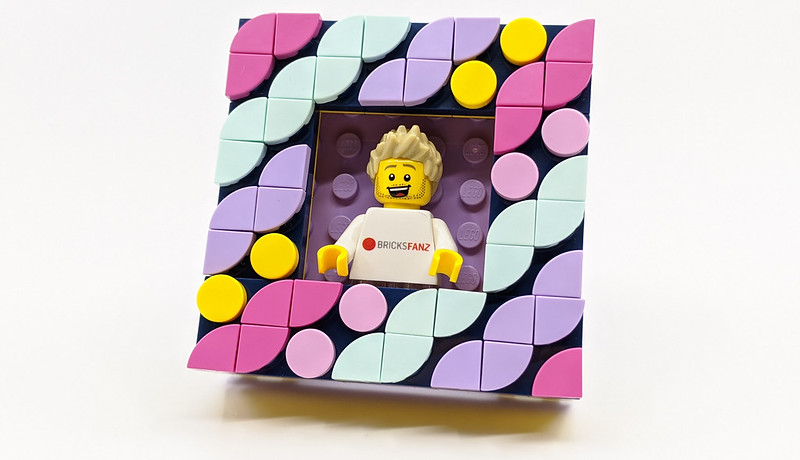 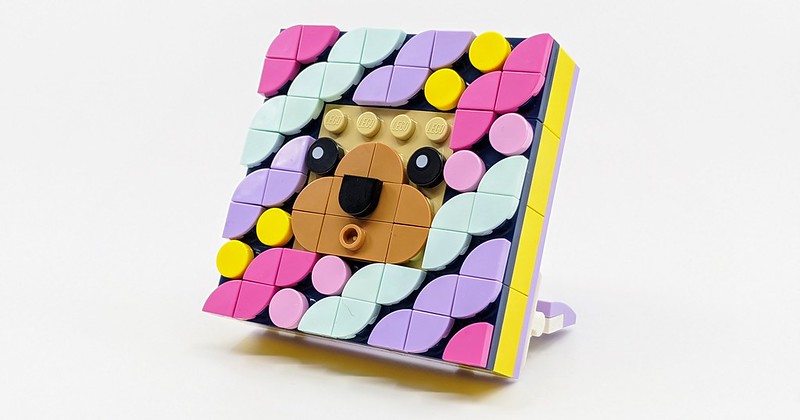 There have been some decent free gifts in recent months, but some have had a rather silly spend limit. But the set limit for the DOTS Mini Frame seems about right. It’s also nice that it’s on a generic spend and not just tied to the DOTS products. As a build, it fairly simple but acts as a nice canvas for creativity. It would have been nice if a few more DOTS tiles were included but you can always just spare tiles from other sets or other DOTS products, such as the DOTS extra booster bags. There are only a few days for those in the UK and Europe to take advantage of the offer, elsewhere the promotion runs until March 22nd.