Each year LEGO® produce a number of polybag sets to support the release of various LEGO themes. This years line-up has already given us some decent sets such as the Speed Champions Lamborghini and the Hidden Side minibuilds. There have also been a couple of LEGO City-themed polybags, the most interesting of which is themed around the new LEGO City Ocean Exploration sub-theme. This new ocean-based range of sets introduces a handful of new sea creatures, one of which can be found in the LEGO City Ocean Exploration Diver polybag, so let’s take a closer look at this fun little set. 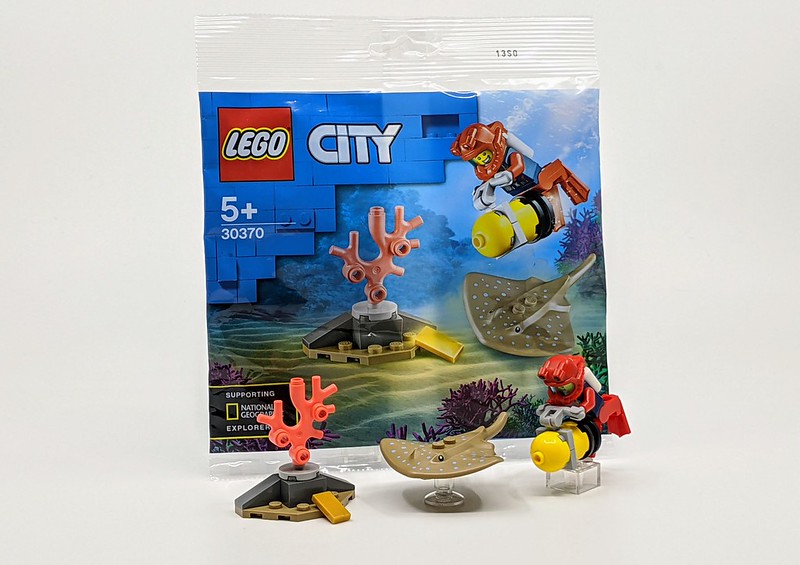 Polybag sets aren’t known for being in-depth, piece heavy sets, and that’s certainly the case with this particular set. In fact, it’s extremely light on pieces and buildable elements. Apart from a basic rocky outcrop (with a bar of gold, which oddly doesn’t use the gold bar element) and an extremely simple Diver Propulsion Vehicle, the set doesn’t much in terms of building. But that really doesn’t matter as it more than makes up for it with the Minifigure and a couple of very cool elements. 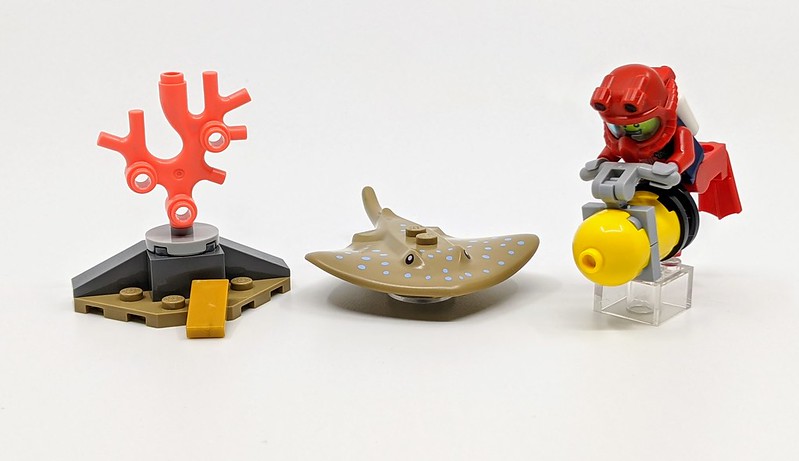 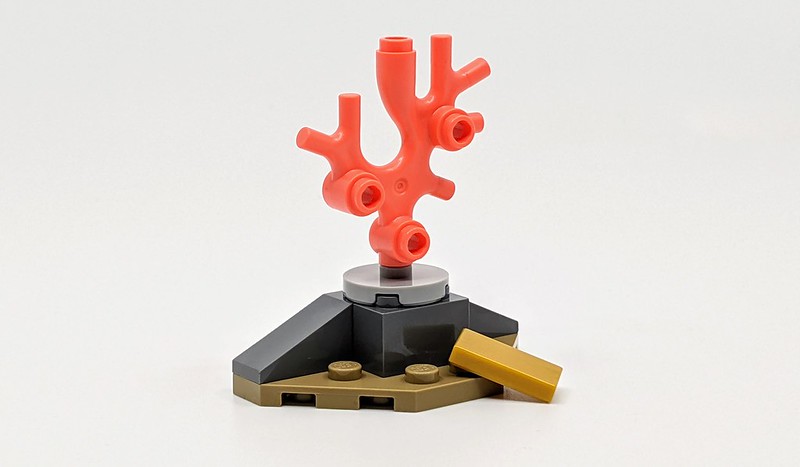 As mentioned above the new LEGO City Ocena Exploration sets introduce a number of new sea critters, and any sort of new LEGO animals are always met with a wave of excitement. In the set, you get one of the new Stingray creatures. This is a single moulded element, with a stud connection point underneath and two clip points near its tail, such you wish to tag a Minifigure to it or some sort of elaborate laser weapons system. The other cool element is the newish vibrant coral piece, which has only appeared in three other sets, since being introduced earlier this year. 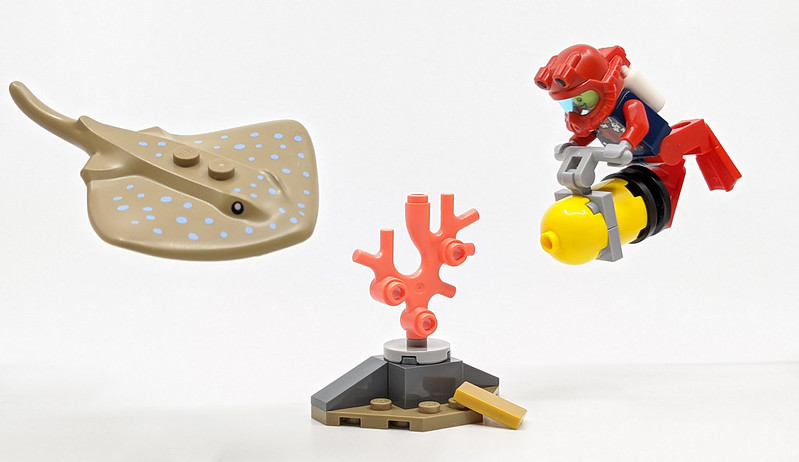 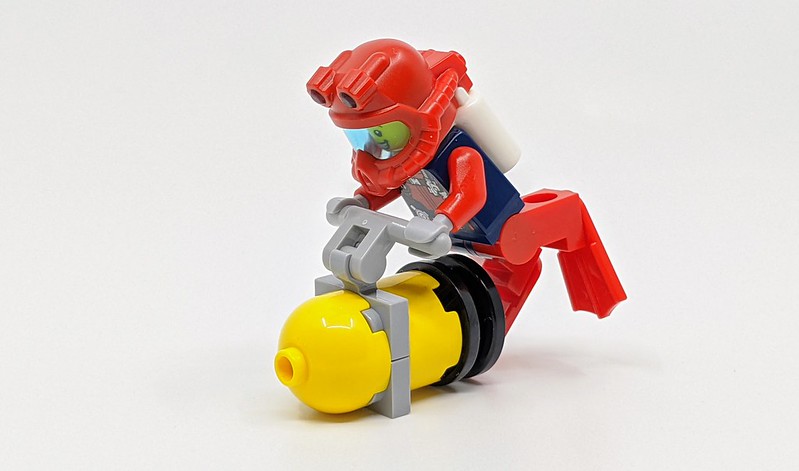 Finally, the set is finished off with a Diver Minifigure. This is mainly created with new-for-2020 elements, so that’s a unique printed torso and legs only found in two of the larger LEGO City sets and a funky new enclosed diving helmet, which fits perfectly over the classic oxygen tank element. Although the DPV is very basic, it’s probably the best I’ve seen and looks great with the Minifigure. 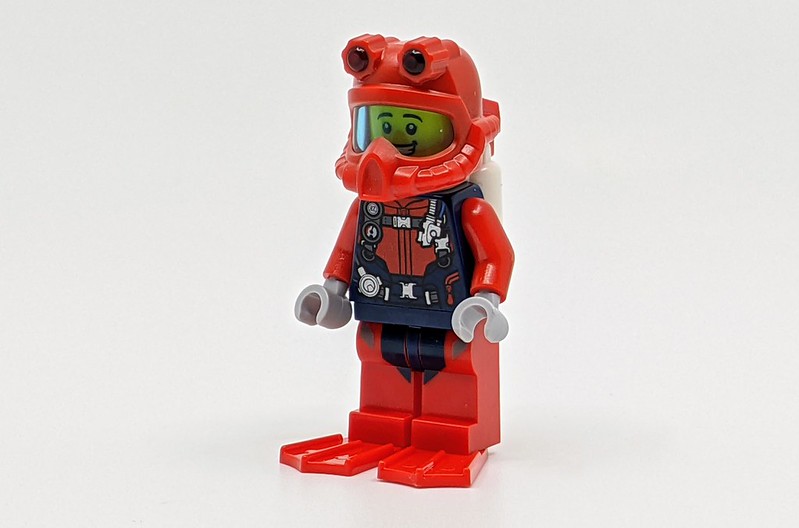 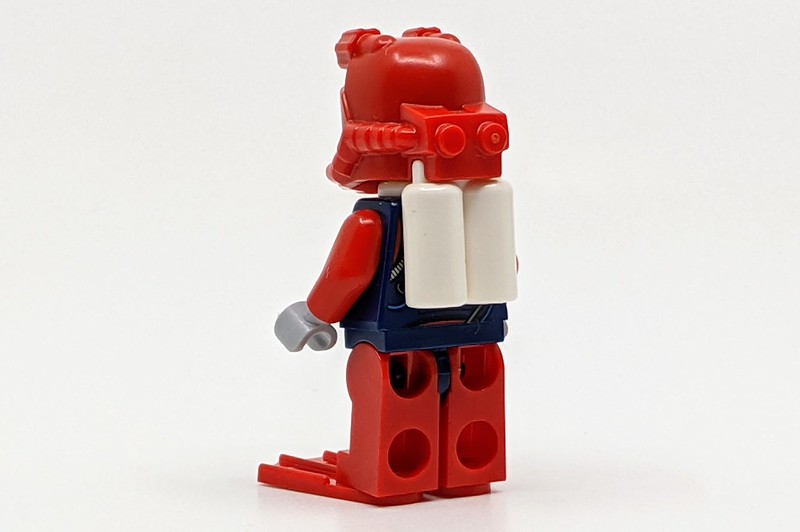 Although it’s currently not widely available, this polybag set is the best and most likely cheapest way to get the Stingray creature and new style Diver Minifigure. The Stingray can be found in the small LEGO City 4+ set but the Diver only appears in the larger and most expensive sets. So it’s definitely worth adding to your collection. It’s possible the set will become a future GWP on LEGO.com or I would hazard a guess that due to the National Geographic branding, it could be given away with future issues of the Nat Geo Kids magazine in the UK.