Last year the LEGO Group partnered with Adidas to create an extremely hard-to-find trainer as part of the ZX range. Since then the partnership has resulted in a number of clothing and footwear releases. The most recent of which were the LEGO Colours Trainers and the VIDIYO clothing range for kids. So far the partnership has been pretty one-sided, that is until now. The recently revealed LEGO Adidas Originals Superstar set is the latest addition to the LEGO For Adults range and one of the most unusual new LEGO sets I’ve had the pleasure to build. I’ve got my hands on the set early, so here’s my review of the LEGO Adidas Originals Superstar trainer. 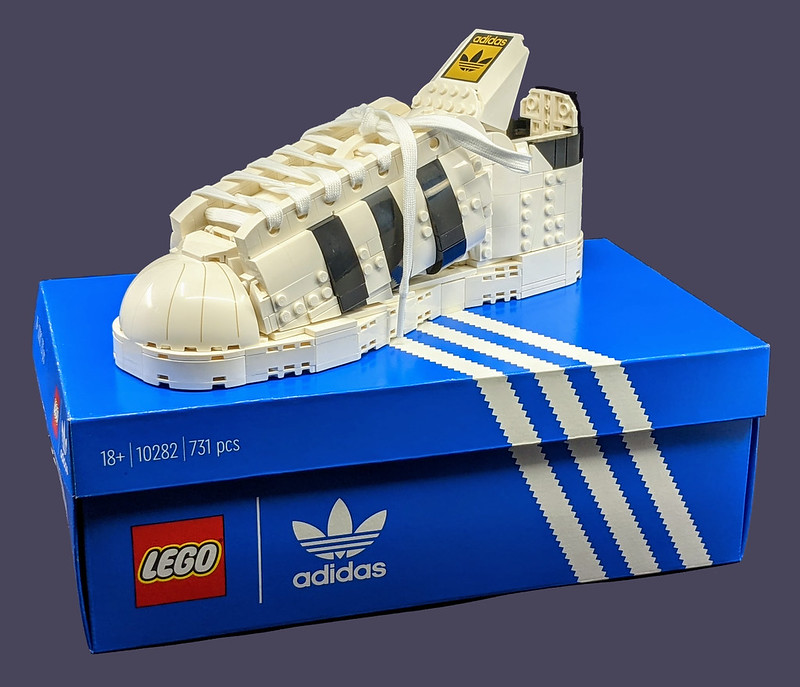 Add a surprising new addition to your trainer collection with this LEGO® adidas Originals Superstar (10282) model. In this never-seen-before LEGO offering, you’ll be recreating the iconic trainer from LEGO elements to make a collectible display piece that’s sure to spark conversation.

Authentic Superstar details
Just like the real thing, this LEGO version includes the iconic adidas Originals Superstar trainer graphics, shell toe shape, trefoil logo and serrated 3 stripes mark. Right shoe or left shoe? You decide! This set includes 17 extra LEGO elements so you can choose to build either the right-foot or left-foot trainer. For extra realism, it even has shoelaces and comes in an authentic shoebox. 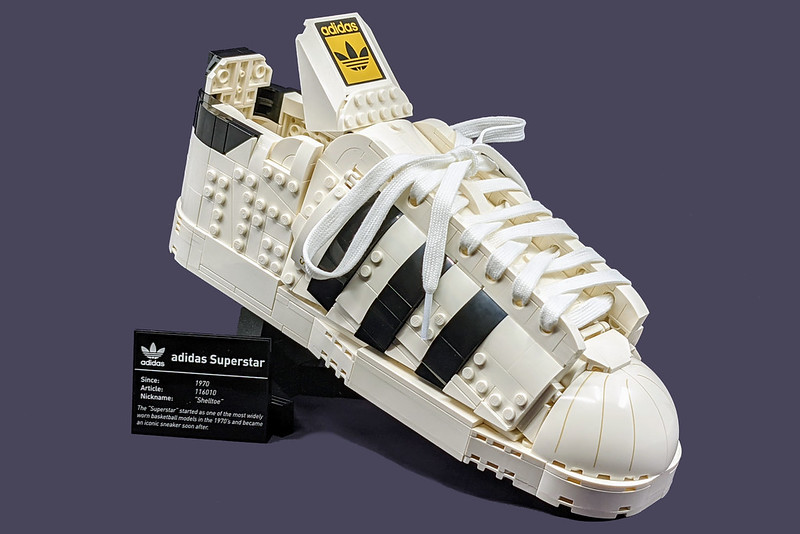 Over the last year or so, the LEGO for Adults line has provided us with some amazingly unusual builds. From playing pianos to buildable plants and the upcoming Typewriter, the LEGO Design Team have really let their imaginations run riot. So as unusual as it seems, a brick-built trainer is just more proof that you can build just about anything with LEGO bricks.

So the essence of the build is a 1:1 recreation of an Originals Superstar trainer. This iconic piece of Adidas footwear helped the company to make it big in the US. The low top shoe caught the attention of NBA basketball players, which caused their popularity to explode and in doing so they helped to influence ‘Sneaker Culture’. The design of the shoe is fairly simple but includes a number of key features, which make them easily identifiable. These are the shelltoe tip, black band around the trainers back and of course those iconic three stripes on the side of the shoe. 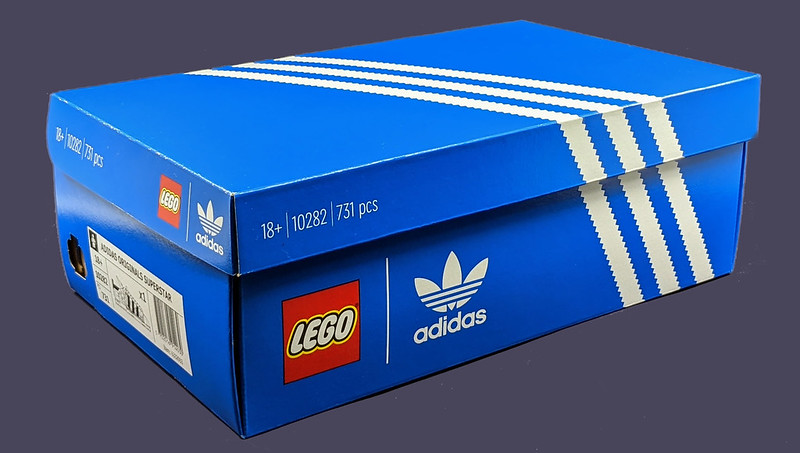 But does all that translate into a brick-built version, the answer is yes. But before we get one to that, I must first mention the packaging. Now the new 18+ sets which are officially dubbed ‘LEGO for Adults’ going forward, have all been packaged in the new black boxes. But the experience of the set has been expanded to include the box, with this set coming in shoebox style packaging. It’s been given a LEGO-twist with the three stripes transformed into brick versions and there’s even a Minifigure head-shape hole, replacing the circular one on the side of the box. Opening the lid reveals an image of the set, which looks more like the new black style boxes. But it doesn’t stop there, as you lift the flap, there a sheet of tissue paper that covers the contents of the box, just as it would with a real pair of shoes. 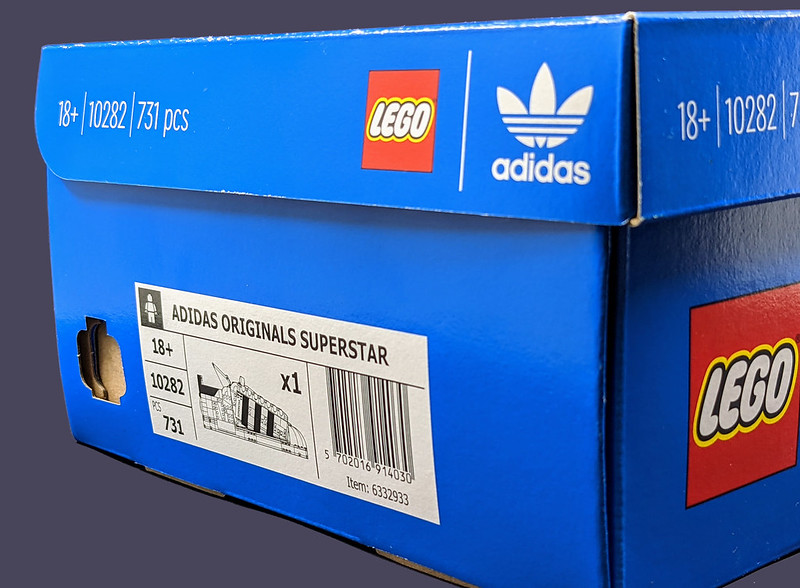 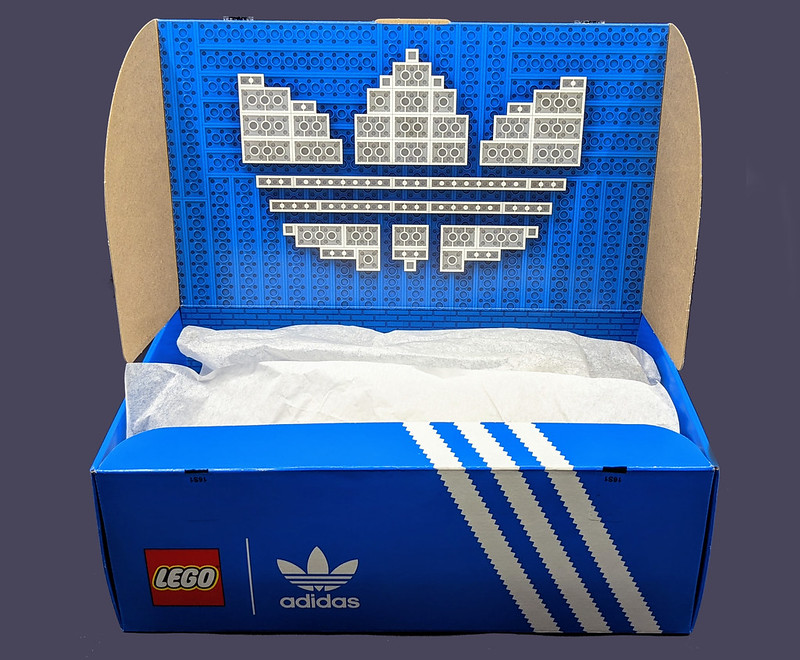 There are a number of bags of elements included along with the instructions and a single sticker. These allow you to build a single shoe, the right those interested, along with a display stand. There are also additional elements included should you wish to build it as a left shoe, with the instructions for that available online once the set is released. So if you want to build a pair you will need to have two full sets. 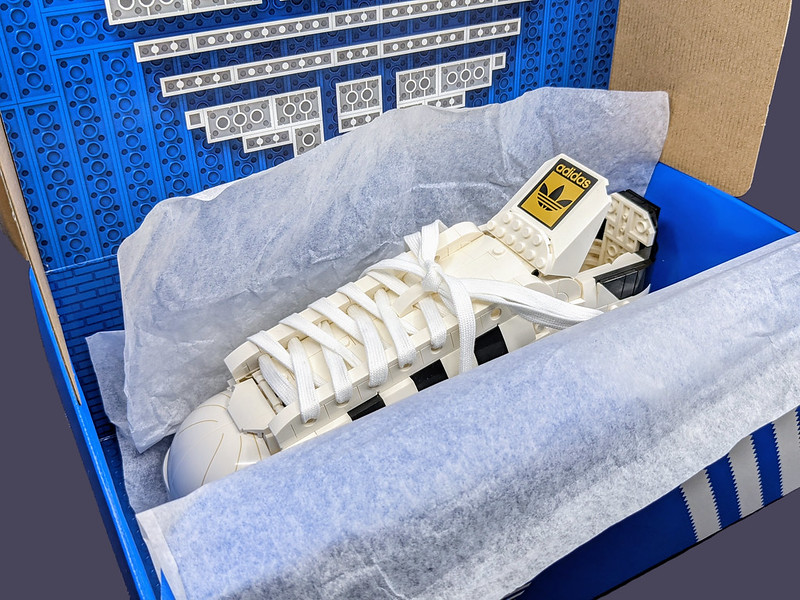 As mentioned this is an unusual LEGO set and the build is the same, which makes it a little more fun. Starting from the sole, there’s a number of unique build techniques in such a small area. These include sections that are built independently from the sole but are then slotted into it and held there but a couple of other bricks. The sole section of the shoe has a couple of neat details including a couple of printed plates to represent the inlay of the shoe and oddly a 2×3 red brick, which is hidden within the shoe once the rest of the sections are connected to the base. 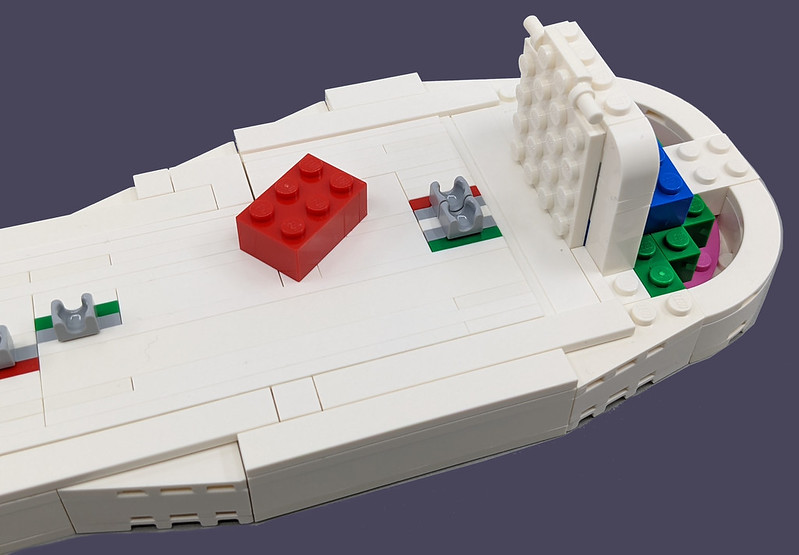 In order to help accommodate the shape of the shoe, the side panels and back of the shoe are also built separately and connected to the sole. The back simply slots into place via a couple of clip hinges. But side panels are a little more tricky, with each connecting via a pair of ball-jointed arms. I did find it hard to make them slope inwards but after a little tweaking, they sat nicely against the sole. 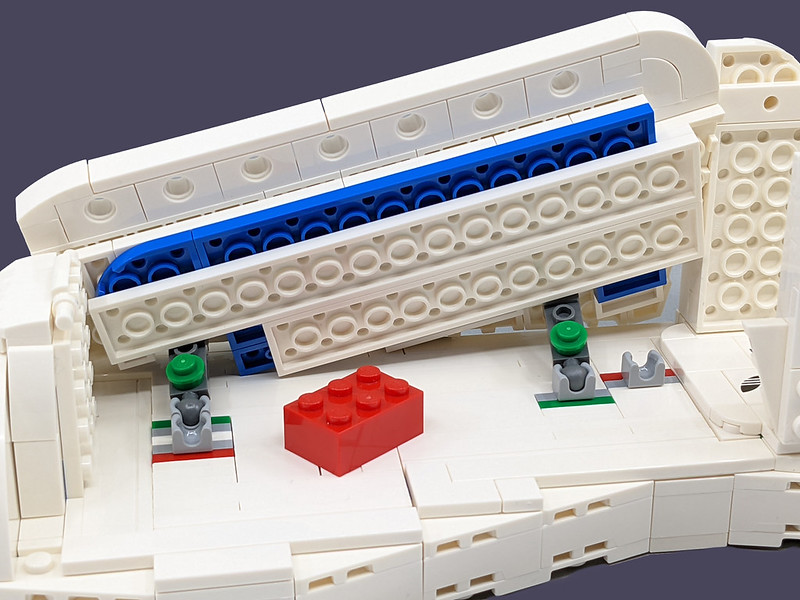 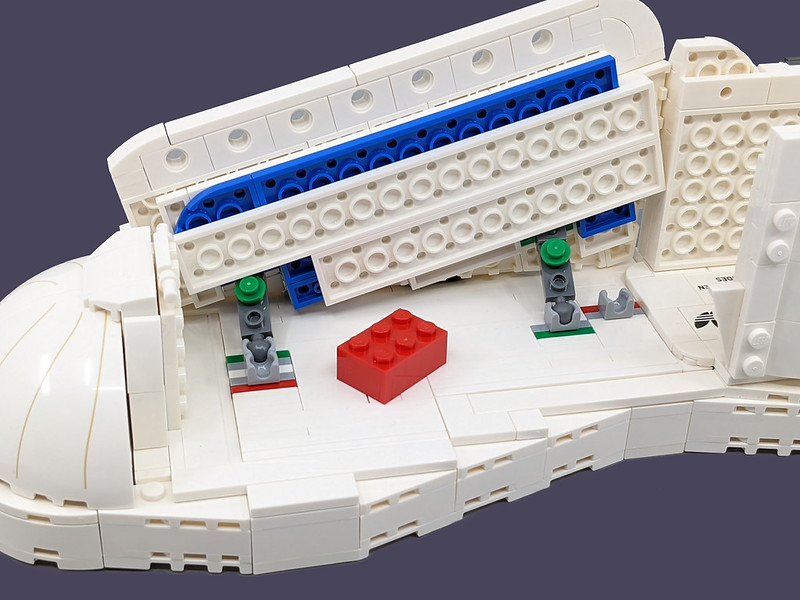 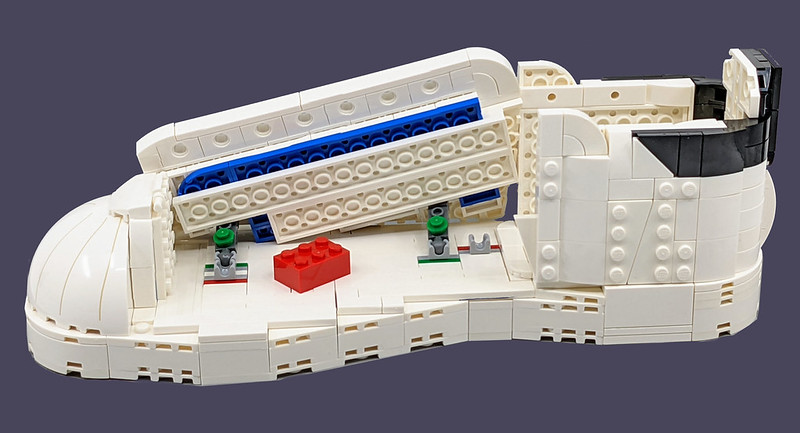 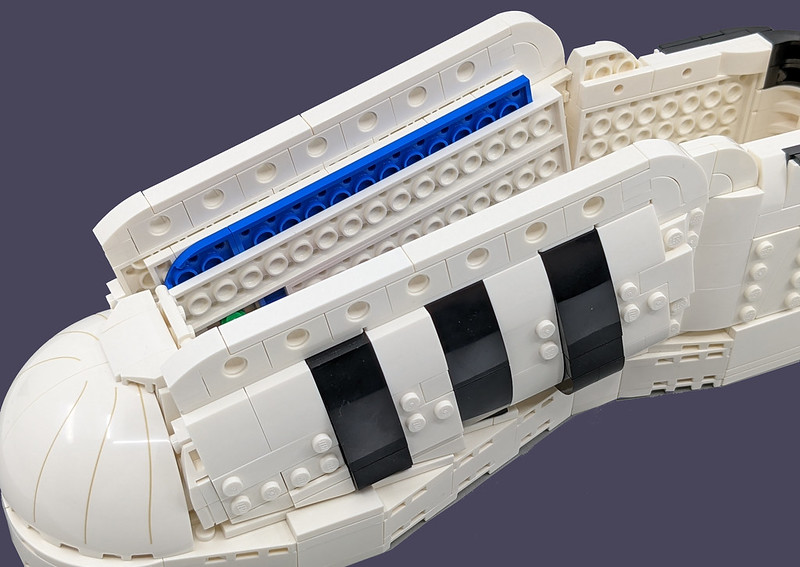 Once the rear of the shoe and the side panels are in place the finishing touches include a pair of quarter domed elements to recreate the famous shelltoe section. These feature a tiny bit of print details. There’s also the lip of the shoe, which clips to the base and rests upon the side panels. This also features a nice printed piece, in the form of a windshield element featuring the Adidas logo. In fact, there are a number of printed pieces dotted about the set. They include the Adidas logo on the rear of the trainer and the Superstar branding on the side panels. 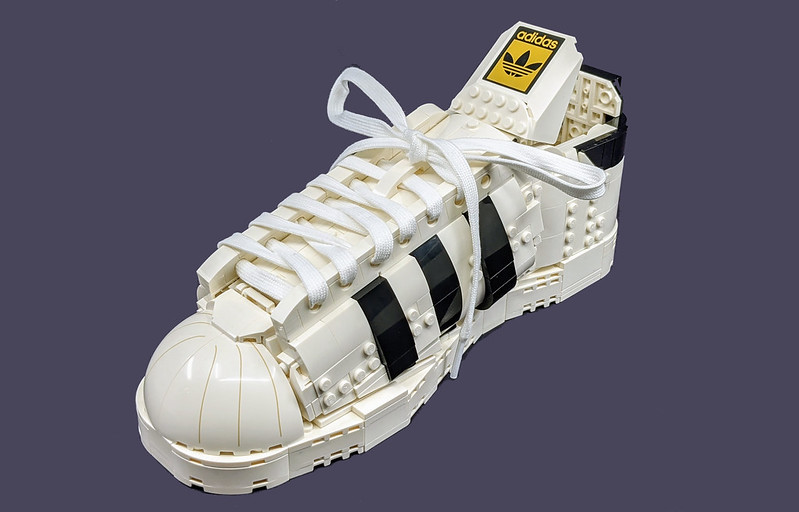 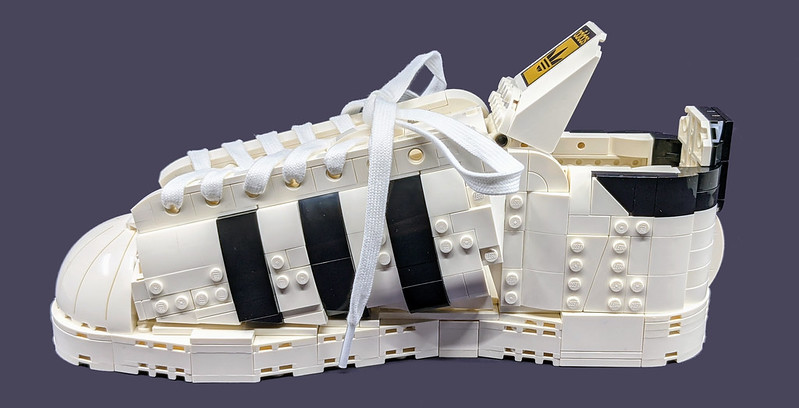 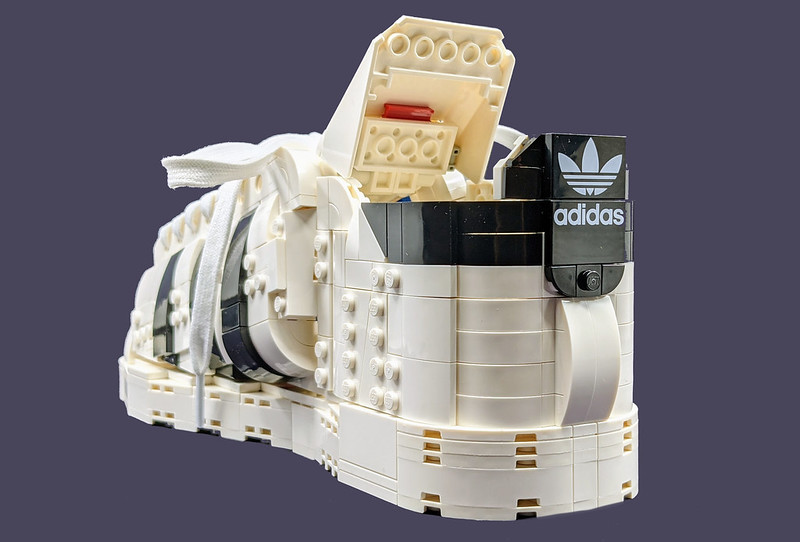 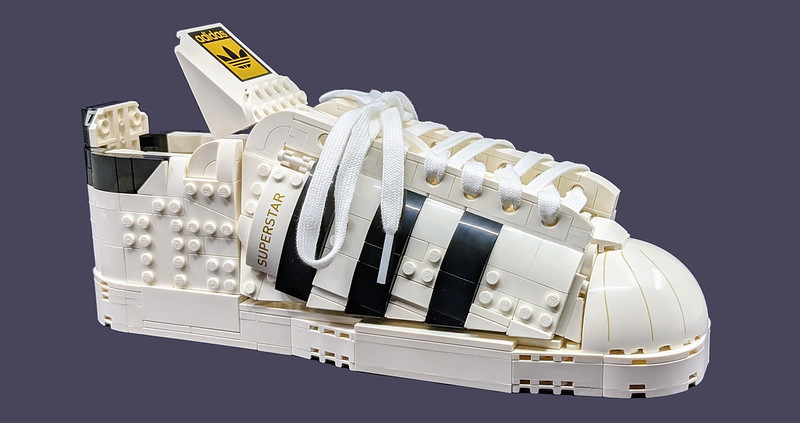 But it wouldn’t really be a shoe without laces and yes the set includes a real lace. This can be woven into the set just as you would the real shoe. With a series of 1×2 bricks with holes in them lining the side panel and acting as the eyelets of the shoe. Once laced up, the final part of the build is a small black display stand. This is similar to those found in various sets such as the buildable helmets and UCS line. It features a pair of white 1×1 arch bricks, which neatly slot into an equally sized hole left into the base of the show. Once mounted it shows the trainer off at a jaunty angle. The display section also features a UCS-style information plate, offering a few details about the shoe. Unfortunately, as with similar sets, this is a sticker and not printed. 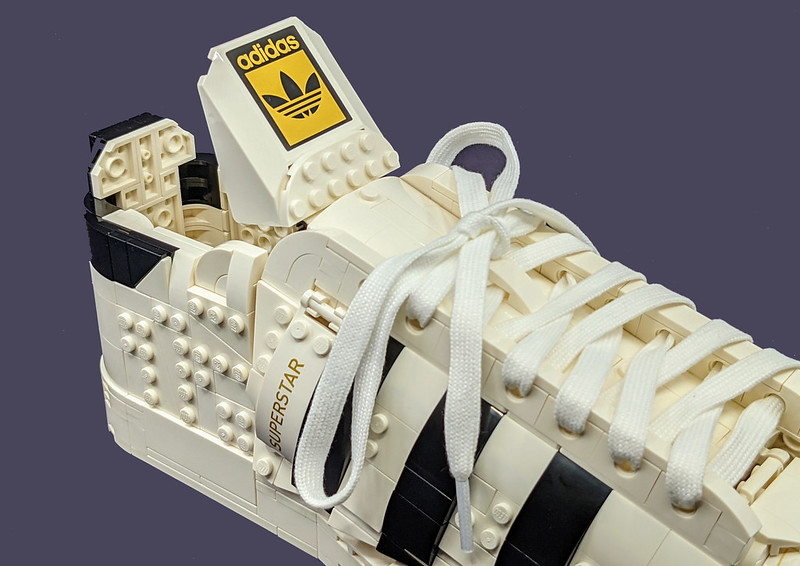 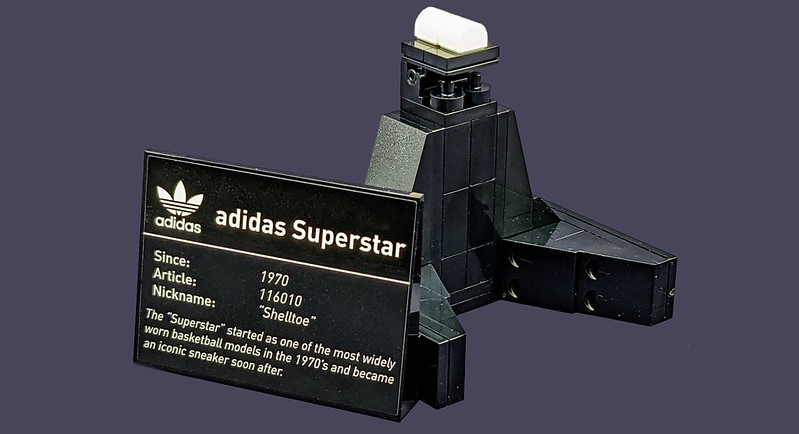 LEGO sets, in particular those from the new adult range, continue to push the possibilities of LEGO building. The shoe may not be the most colourful but it is a great recreation of an iconic piece of footwear. Considering the shape of the shoe it’s aping, the LEGO version does a pretty decent job of recreating it. It may not be a set that all LEGO fans will crave, but it’s certainly one to pique the interest of Adidas fans.