This month a selection of newly designed LEGO® Minifigure packs were released. One of which is based on the upcoming MCU movie, Spider-Man: Far From Home. The pack is called ‘Spider-Man and the Museum Break-In’ and features three Minifigures as well as a couple of bits of scenery. It’s certainly been popular, as it sold out briefly but is now back in-stock and has been released in a few additional countries. It’s not exactly a big set to do an in-depth review of, but it’s still worth taking a closer look at. 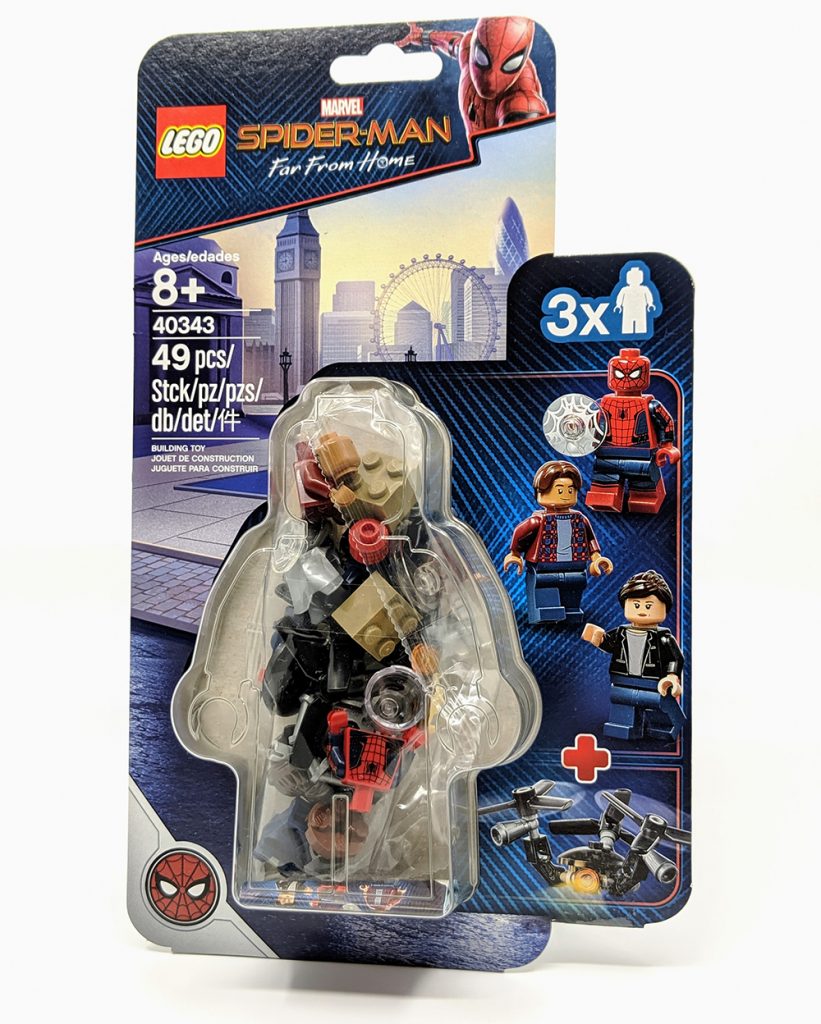 There have been these sort of Minifigure Packs released before, but the packaging has been given a little bit of a redesign. The pack is now styled as a oversized Minifigure, which is pretty cool.

There are three buildable pieces of scenery included in the pack. These include a triple bladed drone, which is mounted upon a clear display rod. It’s joined by two museum exhibits, an undercover jewel and a suit of armour. These are all very simple builds and don’t offered any special elements. 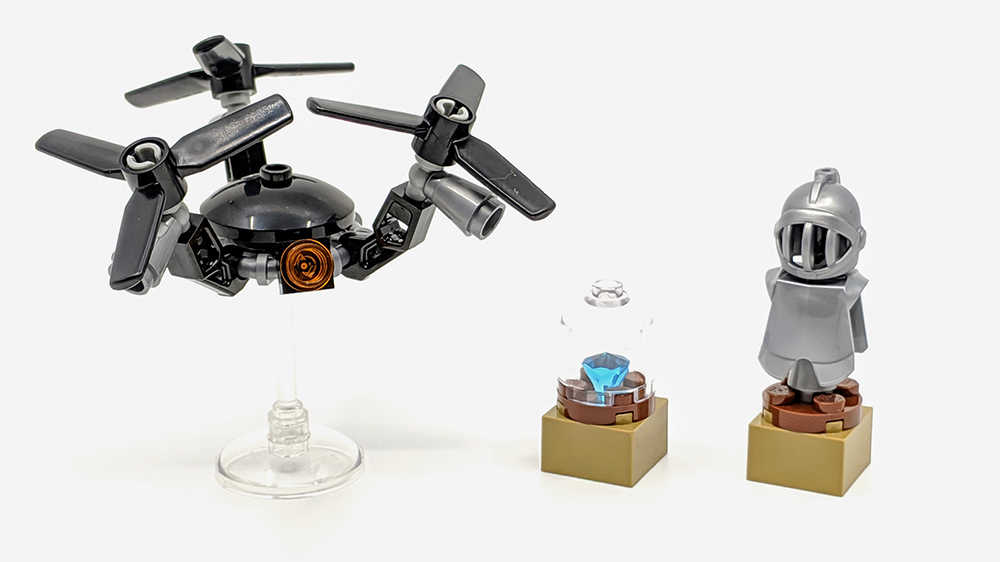 Although the buildable elements aren’t overly exciting, the three Minifigures are a little more so. First up is Ned, who is making his first Minifigure appearance. Ned is Peter’s best friend and was first introduced in Spider-Man: Homecoming. He’s a mixture of previously seen elements with a new head. So his hair is the same style as Professor Flitwick, his torso has also been used in the Harry Potter range, being featured on Harry in the Whomping Willow set. It’s a nice take on the character. 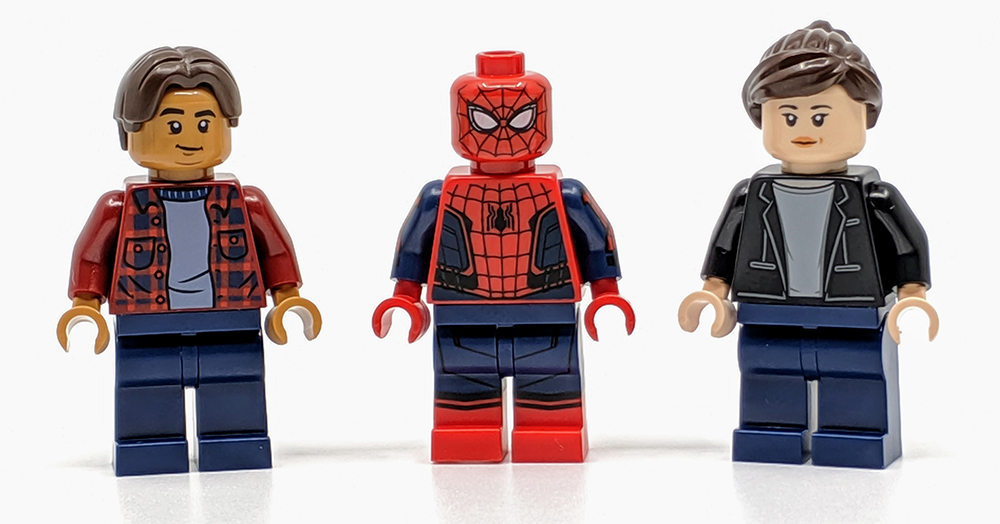 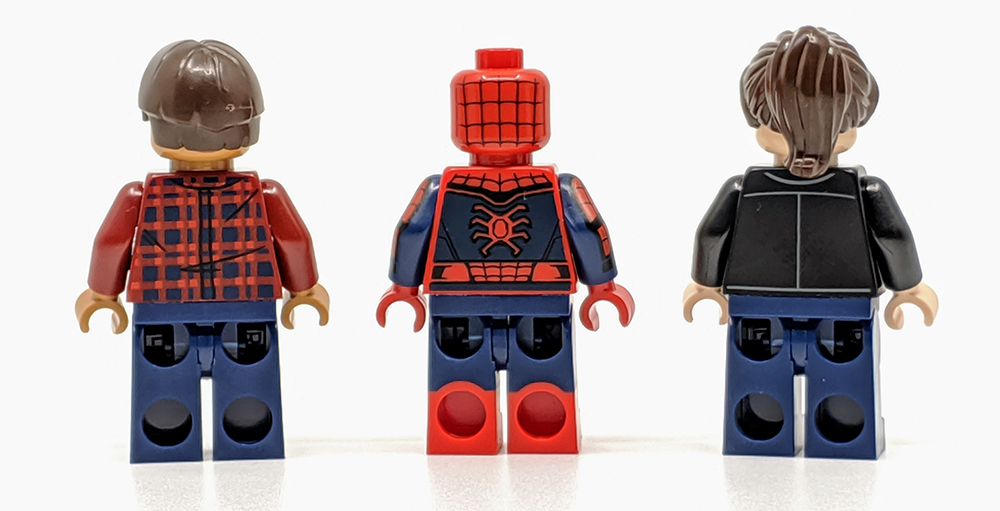 Maria Hill is a rather elusive character when it comes to LEGO. Despite appearing in a number of MCU movies, she has only previously appeared in the huge S.H.I.E.L.D Helicarrier set. Unfortunately her appearance here isn’t overly special. If you weren’t told it was Maria Hill, it would be hard to tell who the Minifigure was. Which is a shame, as she’s a character many LEGO fans are keen to get hold of. Although she appears a little more dressed down in some of Far From Home’s trailers and stills, the Minifigure still doesn’t really match the on-screen look. Finally there is the man himself – Spider-Man. This Minifigure is exactly the same has many of the other MCU Spider-Man Minifigure appearances. But there is an additional headpiece, which has Peter’s mask partly pulled up to reveal his mouth.

It’s a decent enough set, with Ned and that unique Spider-Man head being particular draws for collectors. The same could also be said for Maria, it’s just a shame she looks so generic. The buildable bits really don’t add much to the set, I’d rather Nick Fury or another one of Peter’s classmates were included in their place.