I’ve noticed in various press releases the use of new umbrella branding for various parts of the LEGO Group’s business endeavours. Although this is nothing new with LEGO® Games and LEGO Education being around for years, it seems other partner products or experiences are now being brought together under new LEGO branding. These include a redesign of the LEGO Games branding, as well as introducing LEGO Home and LEGO Entertainment. Hopefully, we’ll learn more over the next few years, especially with LEGO Entertainment and new movies coming from Universal Pictures. I’d assume this is the result of the LEGO Brand Group, which was created in 2018 to tie together various aspects of the LEGO brands beyond the core business of toys and collectables. 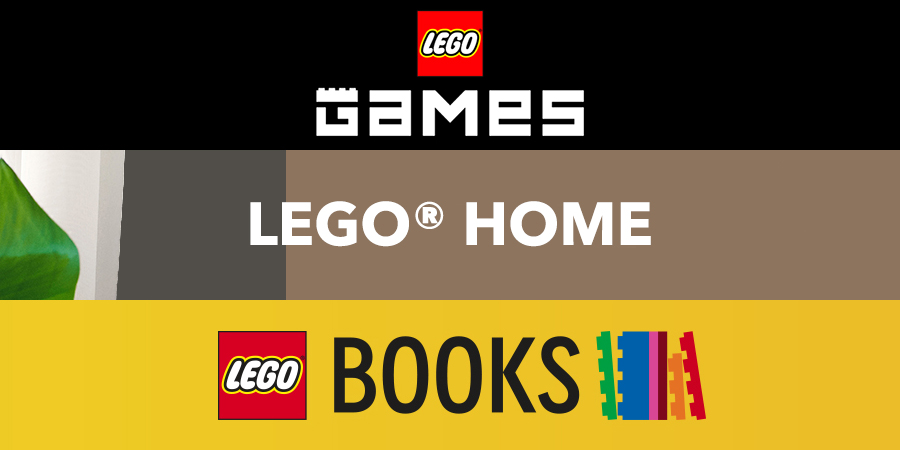 First up is a brand refresh for LEGO Games. First featured on the Bits N’ Bricks, LEGO Games now has an all-new logo that is being attached to everything related to gaming, this includes video games, apps and podcasts. It already covers games created by TT Games as well as content from other developers such as A Builder’s Journey from Light Brick Studio, LEGO Brawls from RED Games and LEGO Speed Champions Forza Horizon Expansion from Playground Games. It’s possible this could also be used for a rumoured LEGO Games theme. Covers physical & digital games along with apps and mobile games.

A couple of years ago it was announced that the LEGO Group and Ameet Publishing have joined forces to create LEGO Books. This umbrella brand covers all LEGO publishing material across print, digital and audio including titles from Blue Ocean, Chronicle, Disney Press, DK Books, Egmont, Kids Media, Scholastic and Universum as well as future titles from Skybound Comics. Covers books in both print & digital, magazines, comics and audio stories.

The recently announced LEGO Wooden Collection is the first product line to fall under the LEGO Home banner. This will encompass all homeware products such as ROOM Copenhagen’s offerings as well as bedding, cushions and storage. ROOM Copenhagen and Character World are largely responsible for all LEGO Home product ranges.

Revealed in the Monkie Kid Amazon press release, LEGO Entertainment will cover all media-related content such as motion pictures, streaming content, animation and TV. Current content such as LEGO MASTERS, NINJAGO, Monkie Kid and LEGO City Adventures as well as upcoming films from Universal Pictures and other content from Disney+ and Netflix will all fall under LEGO Entertainment.