Back in 2017 LEGO® introduced a new collectible concept known as Pods, the initial releases were offered as promotional items or limited releases at such places as LEGOLAND park stores. Despite a Star Wars themed Pod being pulled at the end of last year, LEGO Pods are set to continue into 2018. With the wealth of new sets released as part of the Winter line-up, two further LEGO Pods were added to the range, but these can be purchased on their own. LEGO Pods are a simple concept, a plastic clamshell type case, which contains a minifigure and a number of related accessories. They are rather reminiscent of the old Mighty Max and Polly Pockets toys from the 90s. The best thing is they can be applied to just about any LEGO theme. The latest to Pods are based on the LEGO NINJAGO Masters of Spinjitzu line and are known as Kendo Training Pods. So let’s take a look at them both in our latest LEGO set review. 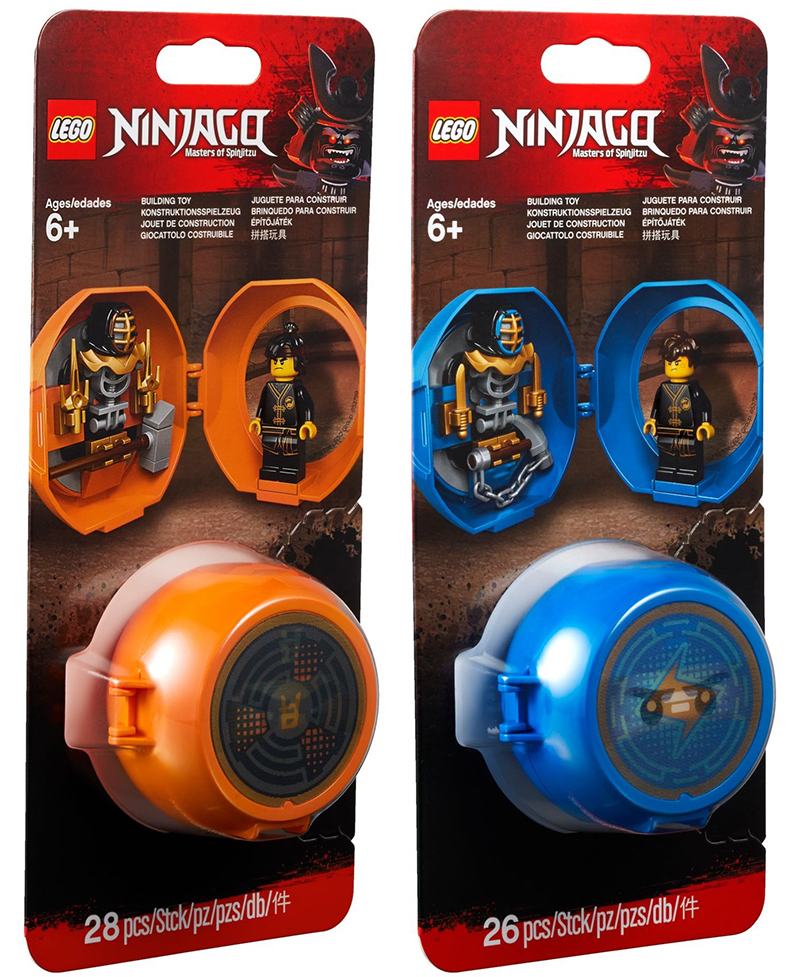 Open Jay’s Kendo Training Pod and find loads of cool stuff to practice your ninja skills. Play on the go with this portable pod in the color of the Blue Ninja, including a LEGO® NINJAGO® Jay minifigure in Kendo outfit, Kendo mask element with blue rim and assorted ninja weapons.

Carry Cole’s Kendo Training Pod with you and practice your ninja skills wherever you go. Open up this LEGO® NINJAGO® toy to find a Cole minifigure in Kendo outfit, Kendo mask element with a brown rim and assorted ninja weapons.

Each Pod comprises of a circular hinged pod, Jay’s comes in blue and Cole’s in orange. Both have adorned by a lenticular image on their fronts. These switch between an image of both Ninja’s eyes and the other a symbol and pattern relevant to the character. Although not based on the recent NINJAGO movie, the imagery features the new character design, which makes the TV characters look at lot more like their movie versions. Oddly the The LEGO NINAJGO Movie promotional pod released last year which featured Kai, had the old NINJAGO imagery on its outer shell.

Inside you’ll be greeted with a bag of elements, an instructions sheet and two sides of the inner pod. The lefthand side has a plate containing 24 studs and the other side, a graphic stickered background which shows a generic street scene. The right-hand side of the pod also has a 2×1 plate inlaid into the foot of it, these is where the minifigures can be placed.

The 24 stud plate acts as a build surface for the set, although elements vary between the two characters, their basic collection of parts are fairly similar and once added, can easily be closed to contained both the accessories and minifigures with ease.

As mentioned above both pods have a similar build, a handful of 1×1 tiles with clips allow various other elements to the held in place. A skeleton torso and plain minifigure head is used a sort of dummy on which the Kendo mask and shoulder armour can be stored when not in use. 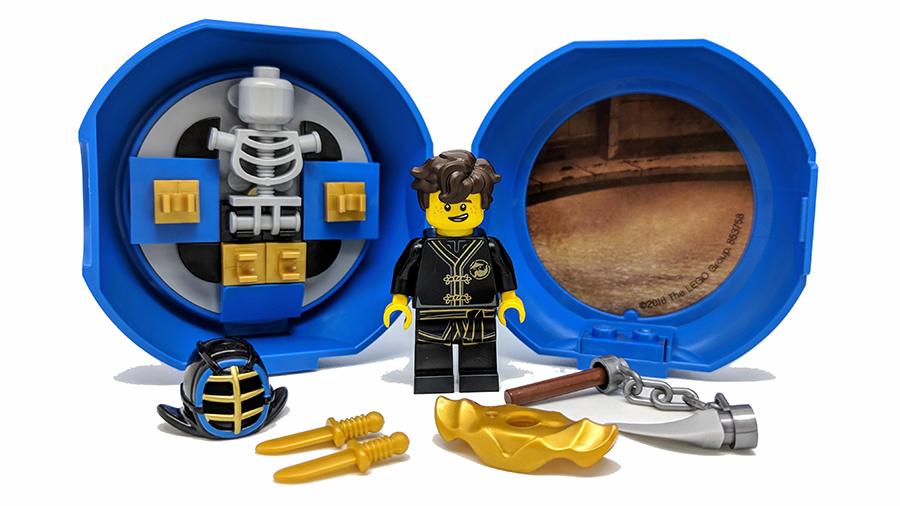 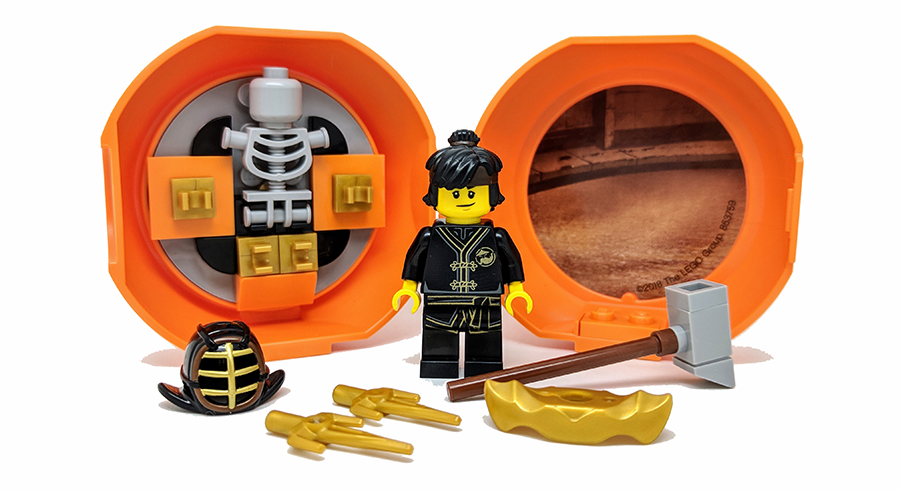 There are slight differences, Jay’s pod has a couple of golden daggers and his flail weapon. Jay’s Kendo mask also has blue trim around the helmet. Cole’s pod features a pair of golden sai, Cole’s hammer weapon and the Kendo mask has a brown trim. Their builds are quite simple, more so than your average polybag minibuild but these sets aren’t meant to be in-depth builds. Instead they act has fun little collectible sets with playable elements.

With the NINJAGO TV show entering its eight season this year, the main characters have been given a visual makeover to make them appear more like their movie versions. Both Jay and Cole featured in each of their pods, sport this new look. Jay now has the new hair element introduced with his movie appearance and found on this civilian version included in The LEGO NINJAGO Movie Minifigure Collection. Removing his hair element and replacing with a combination of the shoulder armour and Kendo mask, give Jay a completely different look. 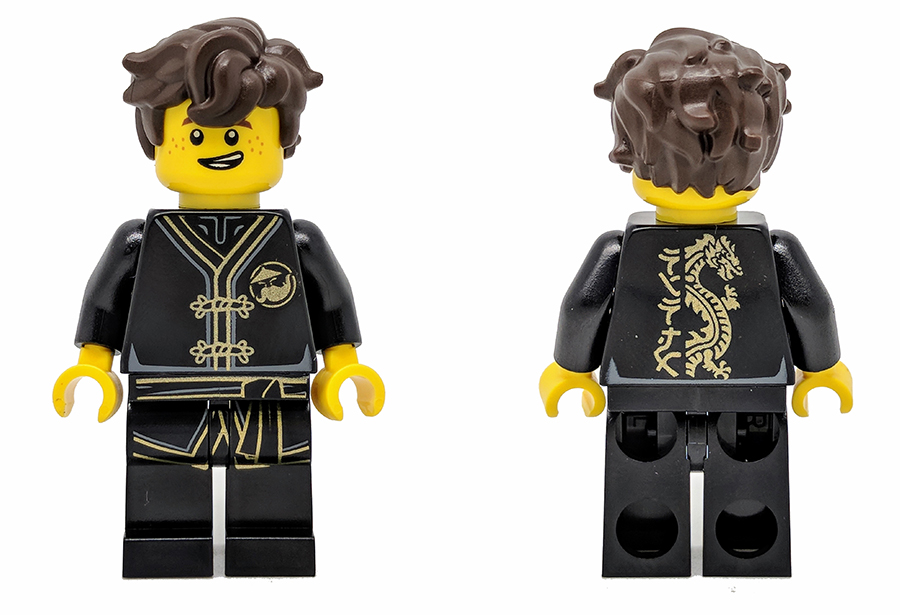 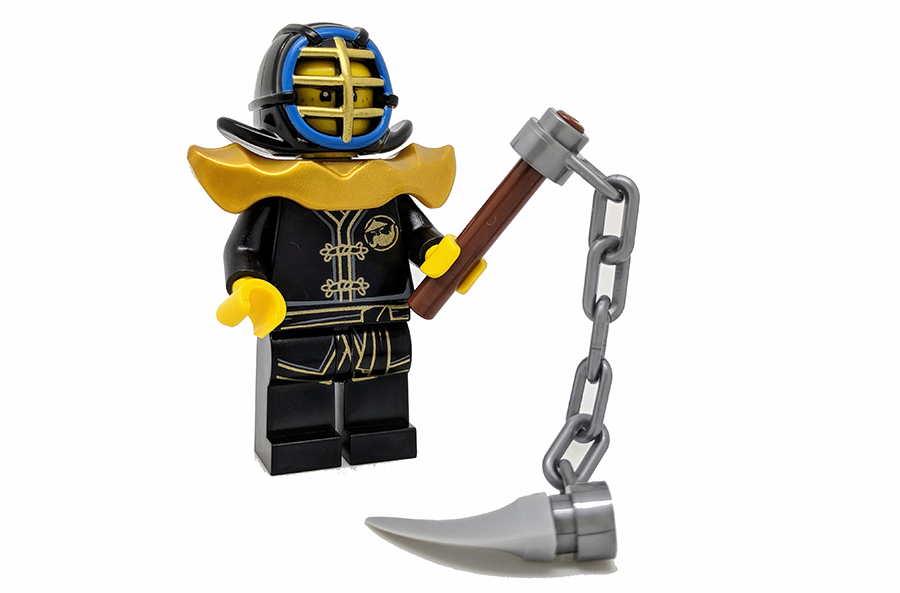 Just like Jay, Cole also sports a look more akin to the movie version, so as Cole’s new topknot hair element, also introduced with The LEGO NINJAGO Movie sets. Cole’s weapon is a hammer, that is made from a stick with flange, a 1×1 brick with knob and a cheese slope and 1×1 plate. 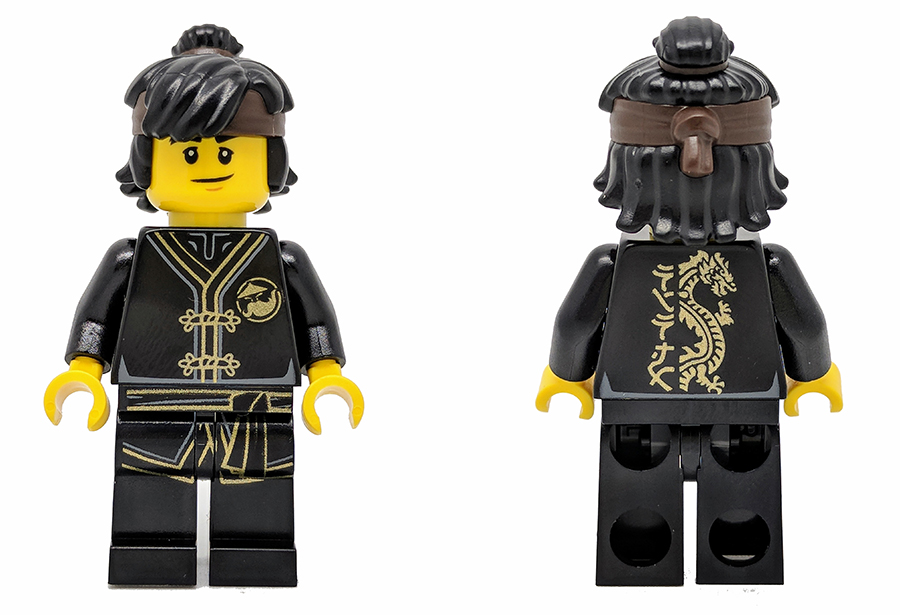 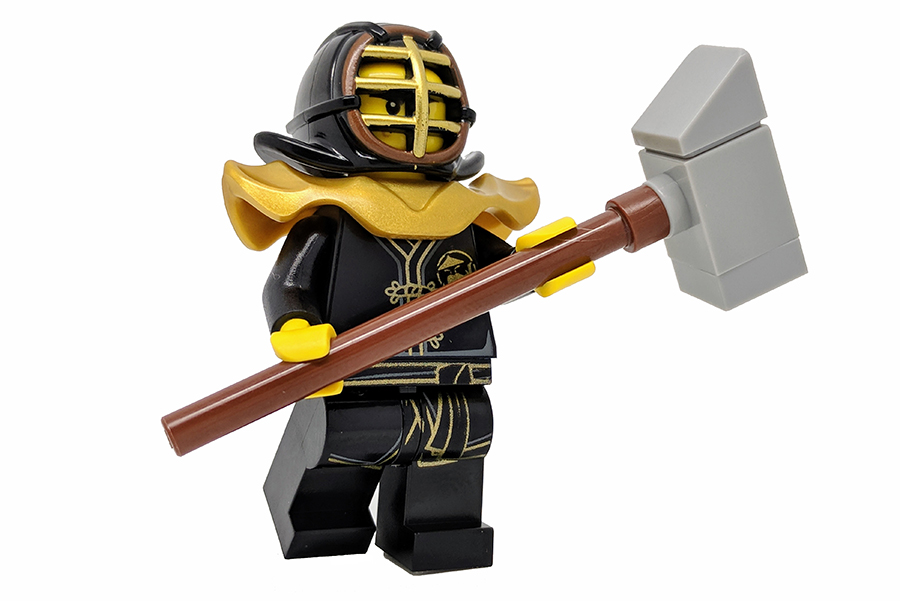 Both torso and legs each character wears are exactly the same. This black and gold trim outfit is fairly similar to the white Spinjitzu outfit from the movie range. The front features the Wu Cru logo and on the back a golden dragon design along with the word NINJA spelt in NINJAGO writing. As fun looking as the Kendo masks are, I prefer both characters in their pure form. Although print design is minimal, the colour schemes works really well. 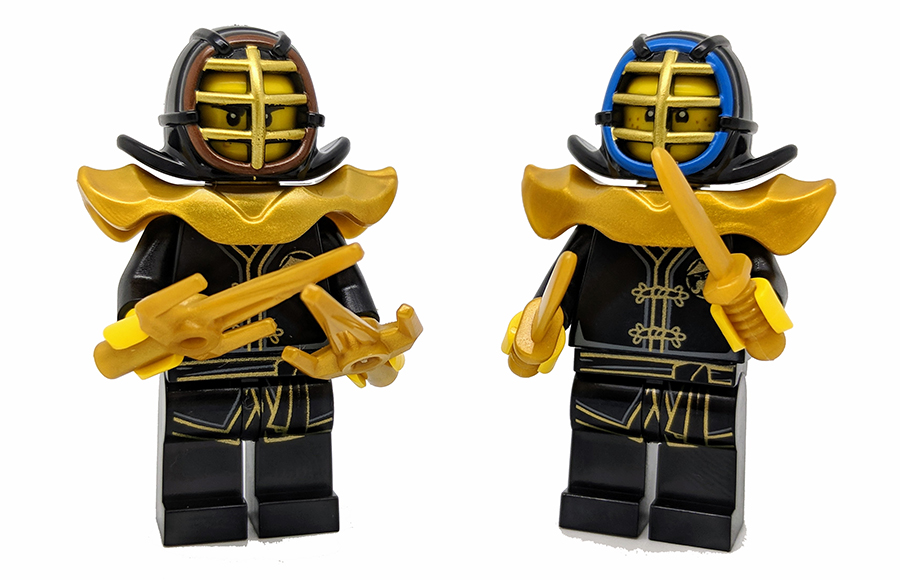 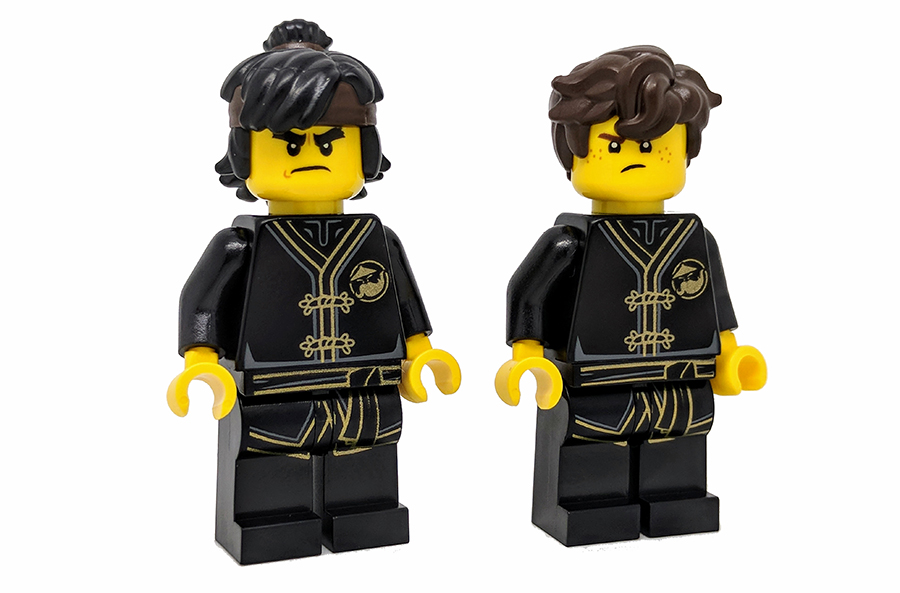 Each character has dual facial expressions, on one side a nervous grin from Jay and a slight smirk from Cole. With both characters having a more determined look on their opposite sides. Again these are also more like their movie versions and will be seen in the upcoming new series of the show, Sons of Garmadon.

The LEGO Pods are a great little collectible, and the latest two releases are a worthy addition to the range. Hopefully now we have Cole and Jay, plus with Zane appearing as a promotional sets at some point in 2018, we’ll also get the rest of the characters from the show in pods as well. They may not offer a great deal of building but the overall product is fun and can easily be carried around safely. Making them perfect for kids to take to their friends house and a great collectible. The only downside is they can be hard to find, thankfully these are available directly from LEGO Brand Store and shop.LEGO.com. But some of the promotional ones seen below have appeared in tricky locations or are just not officially released at all and then suddenly appear on eBay. 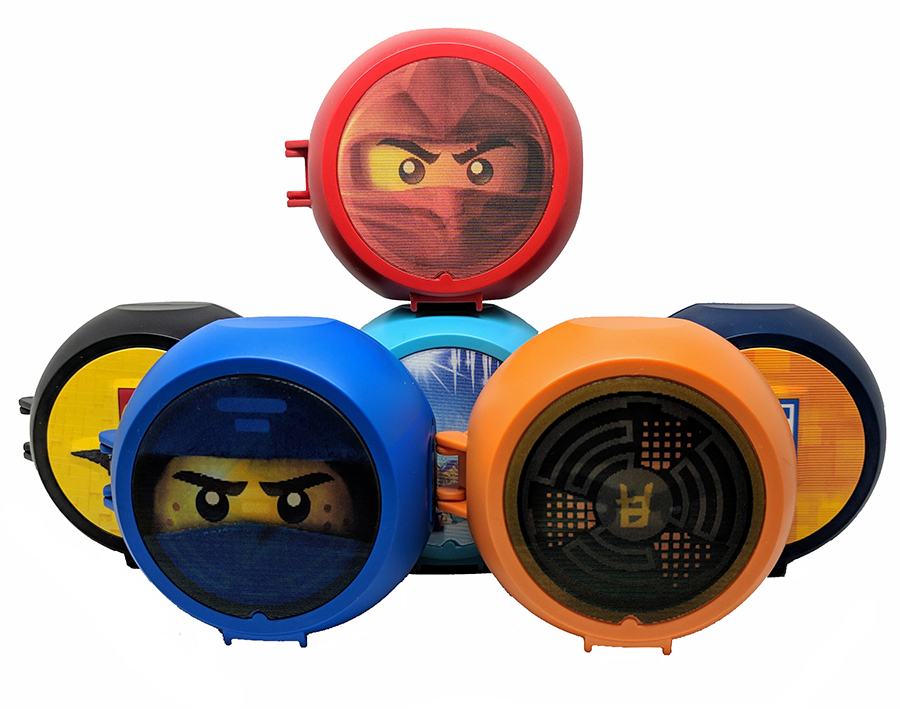