It’s time for another LEGO® Movie 2 set review and we join Emmet with another of his questionable ideas – the Thricycle. As we learnt in the original LEGO movie, Emmet isn’t the most imaginative fellow. Apart from his Double Decker couch, Emmet hasn’t truly unlocked his inner Master Builder. That’s not to say he isn’t trying, but can his uniquely designed three-wheeled bike really, cut it in a world of amazing builds? Let’s find out.

Raise your master-building ability to another level with THE LEGO® MOVIE 2™ 70823 Emmet’s Thricycle! This awesome construction toy features a minifigure seat, 3 vertically stacked rubber tires and foldout stabilizers. It includes a fuel station with a buildable gas pump, catapult function and parking spot for the Thricycle, plus THE LEGO MOVIE 2 characters—an Emmet minifigure and a brick-built alien invader with a chomping mouth and rotating cyclops eye. 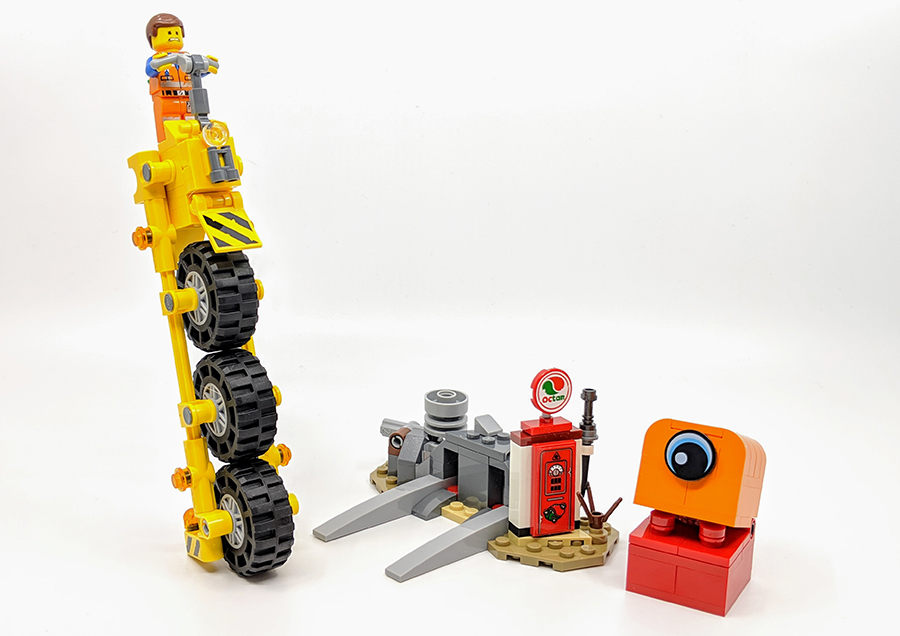 This is a fairly small set but still has a decent amount of things packed within it. The first of which is another brick-built DUPLO® Invader. This orange and red coloured alien, uses System bricks to give the impression of being made from DUPLO. This does allow for some play function to be worked into the build, but I still wish that the DUPLO characters were actually made from DUPLO elements. The actual build is identical to the one included in Ultrakatty and Warrior Lucy set. With a hinge connecting the two halves of the alien and the eye is mounted on a couple of Technic pieces, allowing it to be twisted around. 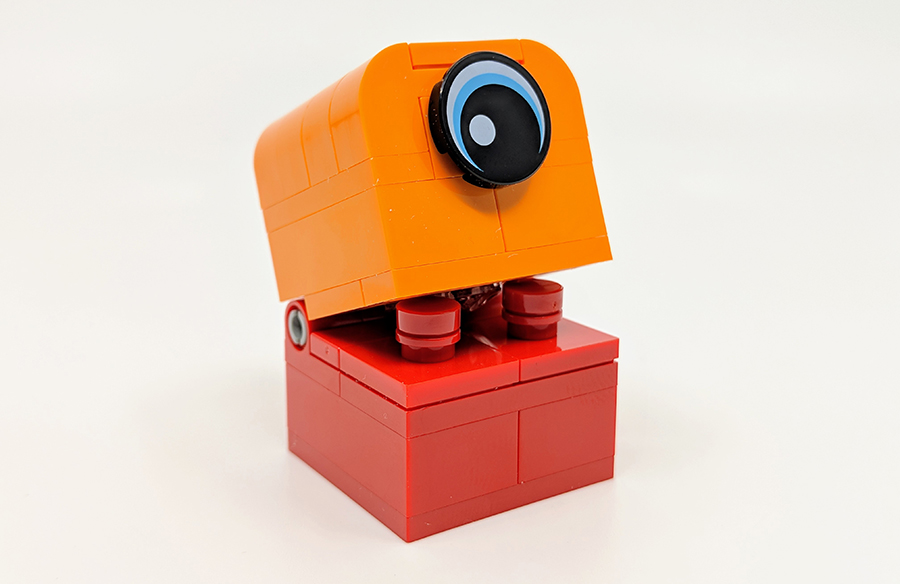 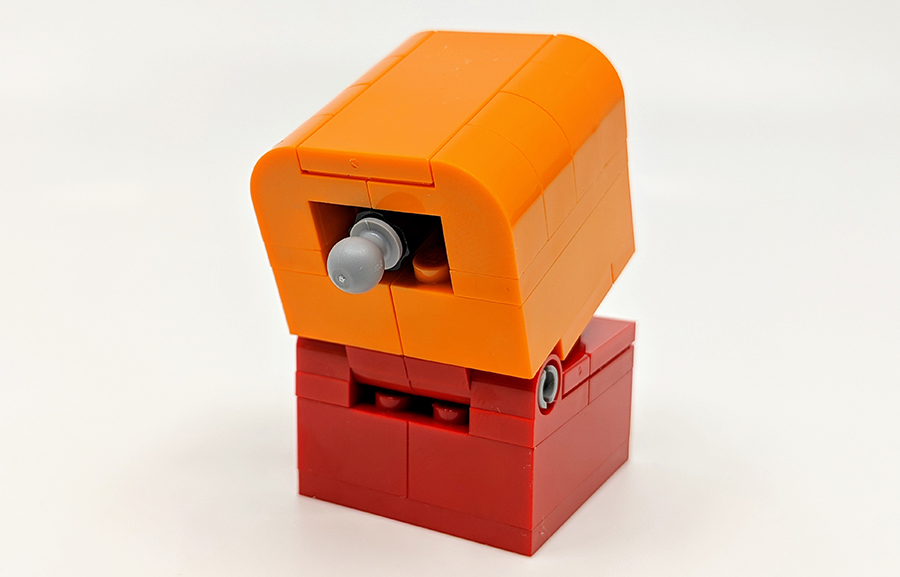 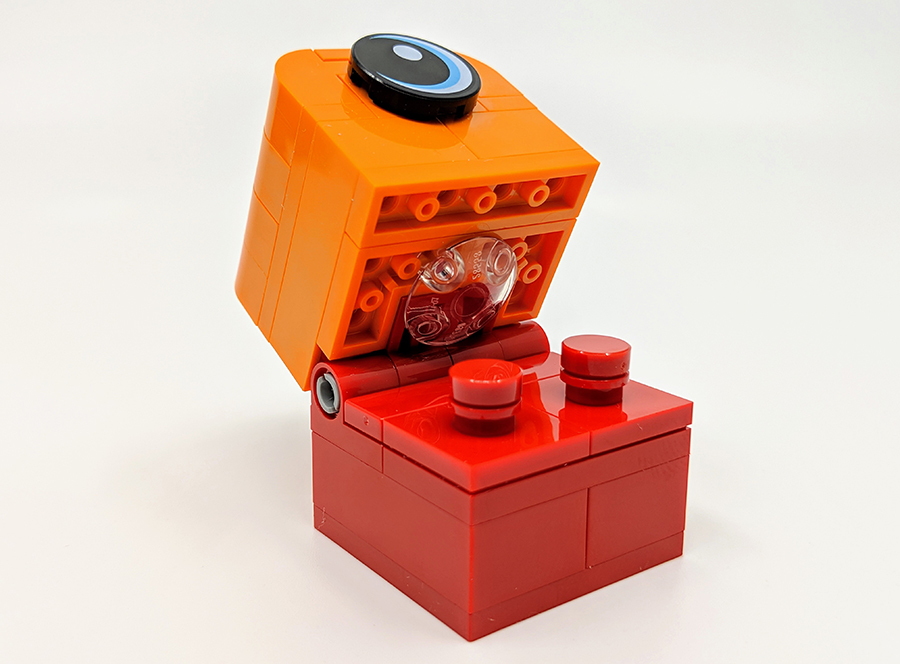 You also get a piece of scenery in the form of a petrol pump and a place to park Emmet’s latest invention. Rather nicely the petrol pump is Octan-branded, less nice is the use of stickers to attain the pumps logo and display panel. On the opposite side of the pump is a little device with launches a tire barrel. These are connected in the centre by an area to park Emmet’s Thricycle. It looks a little like a cross between a forklift trucks forks and loading bay. The main section of the build is dedicated to Emmet’s latest creation, the Thricycle. Surprisingly this use about the same amount of bricks as the DUPLO invaders, and relies heavily on Technic elements. Each of the three tires are stacked atop each other. I’m guessing there is a reason Emmet thinks this is the best way of combining three wheels. The bottom of which is fixed in place, the other two can move freely along the two Technic axles on which they are mounted. The power of gravity means the naturally touch the bottom wheel and therefore turn when the Thricycle is moved along. Emmet can proudly be placed atop the Thricycle along with his best buddy Planty. Amazingly even with Emmet aboard, the Thricycle does freely stand up without the need to place it in the parking bay. Of course it needs to be a fairly flat surface and there is a little bit of a lean, but it does stand up. The set includes three characters, a red and orange coloured DUPLO alien, which I covered above, Emmet’s plant-based best buddy and of course Emmet. Who is pretty much identical to all other versions of the character. He has two expressions, a cheesy grin and a rather worried look. The same head appears in three other sets, but this is currently the easiest and cheapest means of obtaining it, should you like to own all variants of certain characters. Planty is a simple collection of elements, namely a brown ‘fez’ element, a 1×1 plate with shaft and a plant stark. This is a pretty odd set, in one way it’s nice and cheap plus has a trio of builds and characters. But it’s a crazy looking thing, with limited play features and an unfortunate use of stickers, on pieces which could easily been printed. I’ve seen people moaning the set doesn’t stand up on it’s own, but I can definitely say it does, admittedly a slight breeze will have it over, but it will stand up freely. Despite the stickers I love the little Octan petrol pump and the DUPLO alien is a nice addition, but would I liked it more if it was made of DUPLO elements.