Although the Spider Queen looks large in the third wave of LEGO® Monkie Kid sets, the Iron Bull Army still plays a role. Son of the Demon Bull King, Red Son is the genius mind behind many of the Iron Bull Army’s technical marvels. His latest attempt to thwart MK and the Monkey King is the Inferno Jet. This sleekly swooshable jet hides a fun secret feature. But is it enough to add it to your collection? Here’s my review of the Red Son’s Inferno Jet. 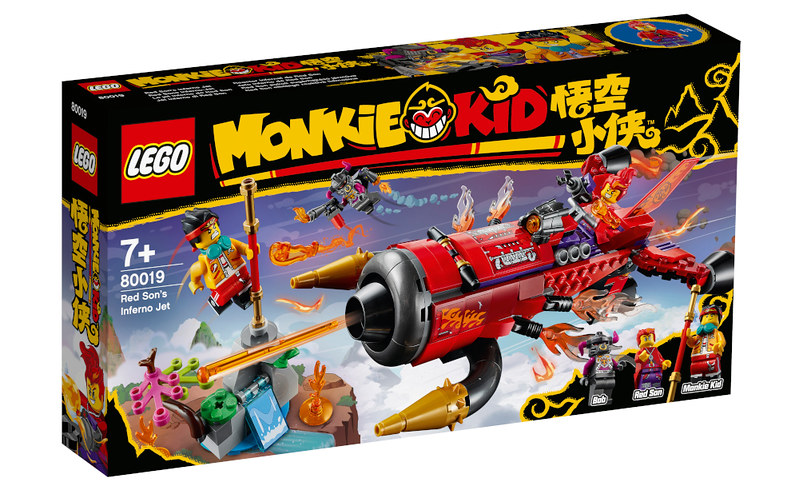 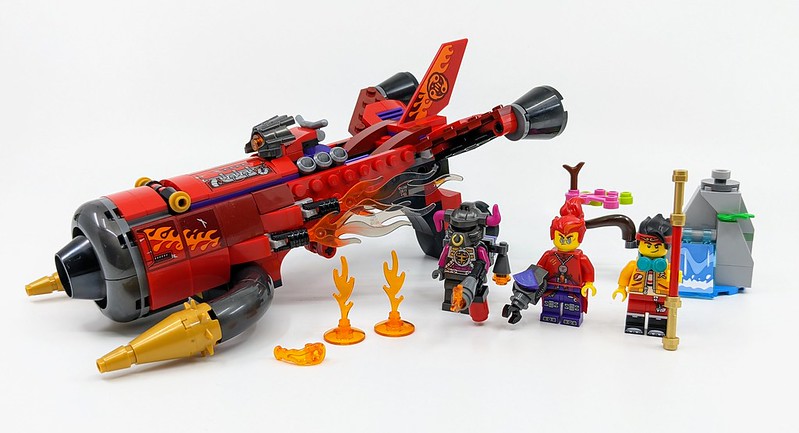 If you cast your mind back to the first wave of Monkie Kid sets, the epic Bull Tank set featured a sleek sports car used by Red Son to take on MK and Mei. Well, that acts as the inspiration for Red Son’s latest invention – the Inferno Jet. The vehicle is best described as the body of a classic propeller plane, minus the wings and propellers, with a few other tweaks and features found on the Inferno Racer. 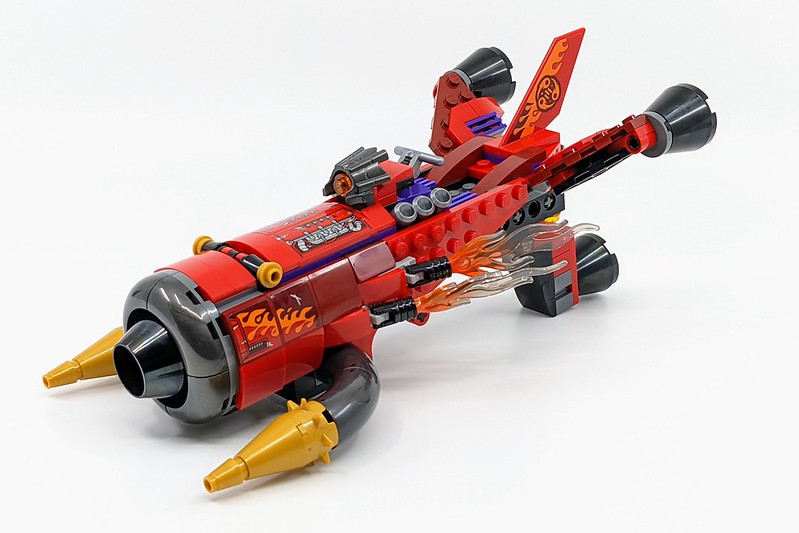 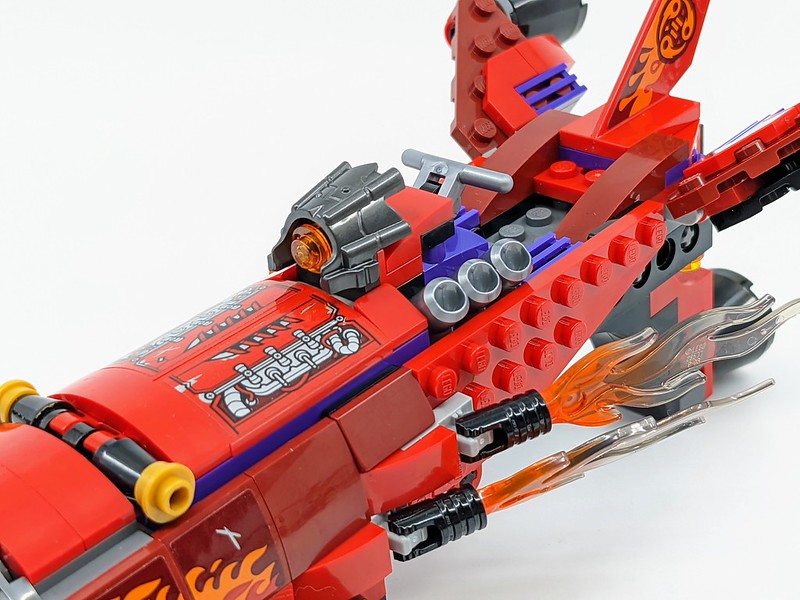 One cool little element found on the Inferno Racer also makes its way onto the Inferno Jet. This is a unique beard element introduced for the Metal beard character from The LEGO Movie sets. I do like seeing elements used in different ways to how they were originally intended. Those horn-like exhaust pipes may look like they are on the wrong way round, but they tie to the Red Son’s connection to the Iron Bull army and his dad, the Iron Bull King. 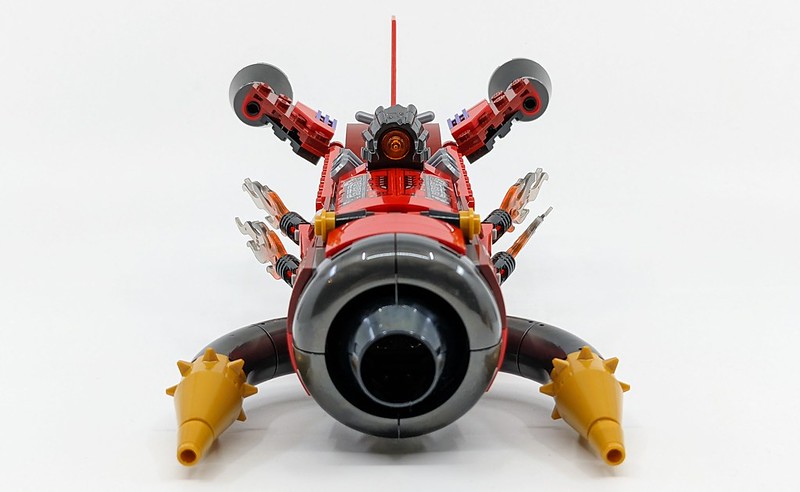 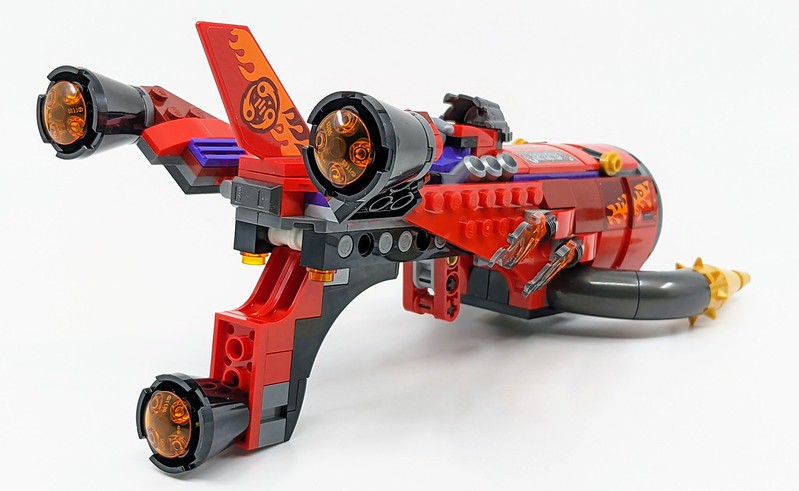 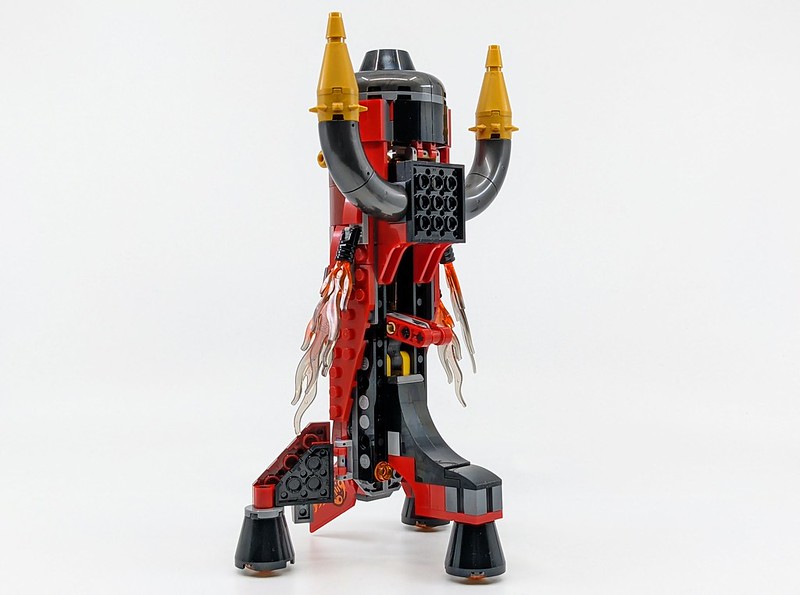 You may notice an odd tail section on the undercarriage at the rear of the jet. This acts as a sort of handle so that the jet can be held like a gun. Not only can handling the set in this way allow it to be zoomed around. There’s a trigger section, which can be pulled to fire two bolts, hidden within the front of the jet. Now I must admit, I thought it was a little bit of a poor design choice in trying to load the bolts through such a small hole. Until it clicked the front section can be unclipped and flipped down. I should really start paying more attention to the end of the instruction booklets. It reminds me of the Boulder Blaster set from the NINJAGO, which also turned the set into a sort of firearm. If I was a kid, this sort of thing would be amazing, even if it does turn a humble LEGO set into a bolt firing weapon. 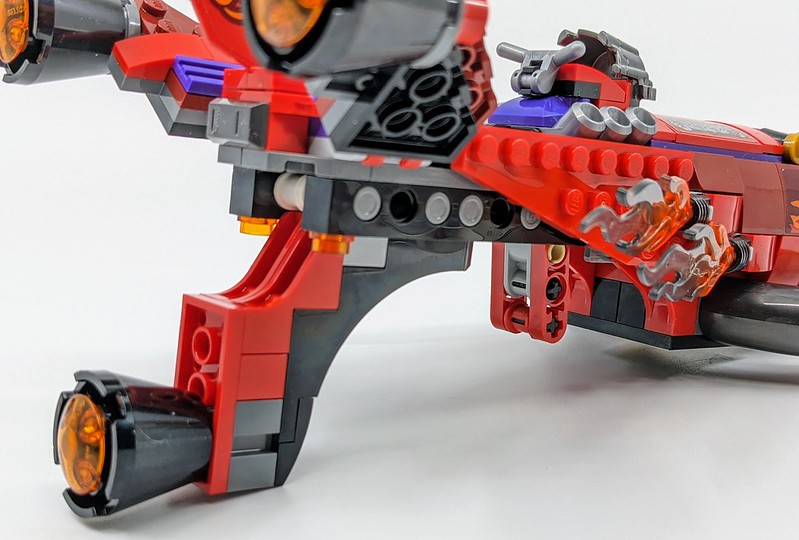 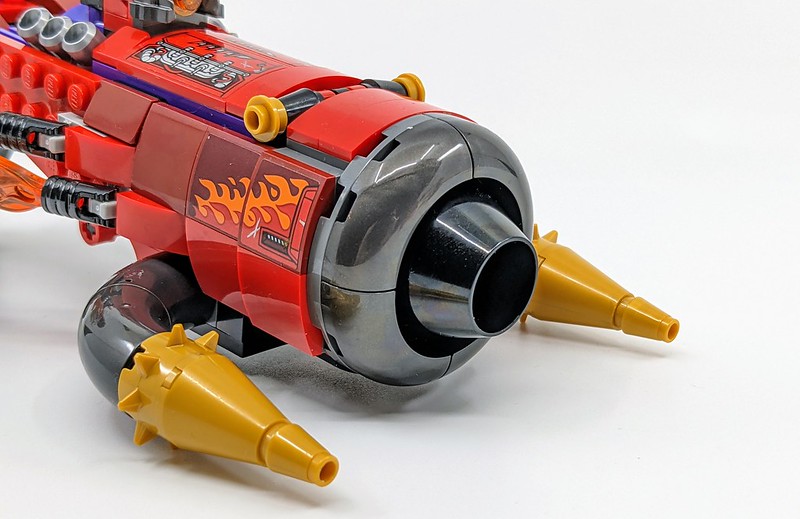 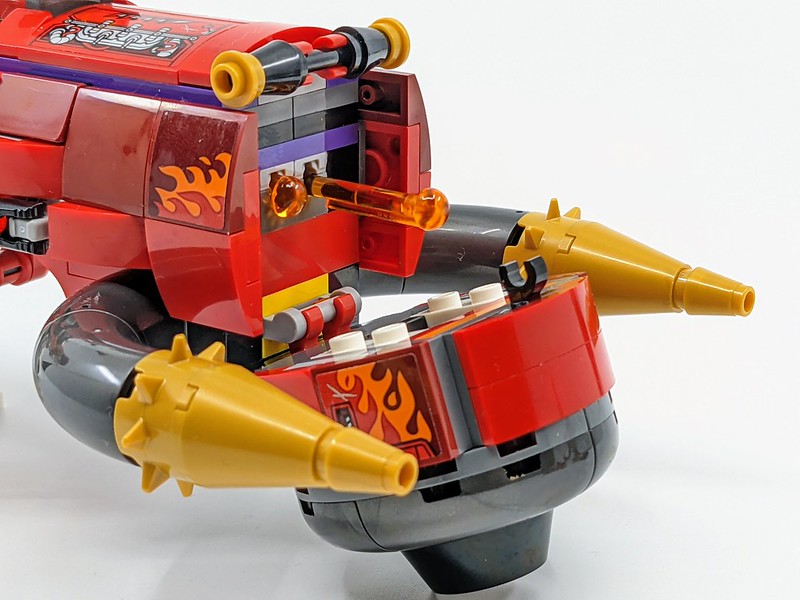 As well as the jet, the set also features a small rocky outcrop. This doesn’t offer much in terms of play features but does hide the current LEGO element of choice, a frog, which can be found under the waterfall. The waterfall is created from a trans blue flap, which has a sticker on it. There’s also a pink and green leaf tree, all of which ties to similar sections from other sets as well as the Flower Fruit Mountain set. 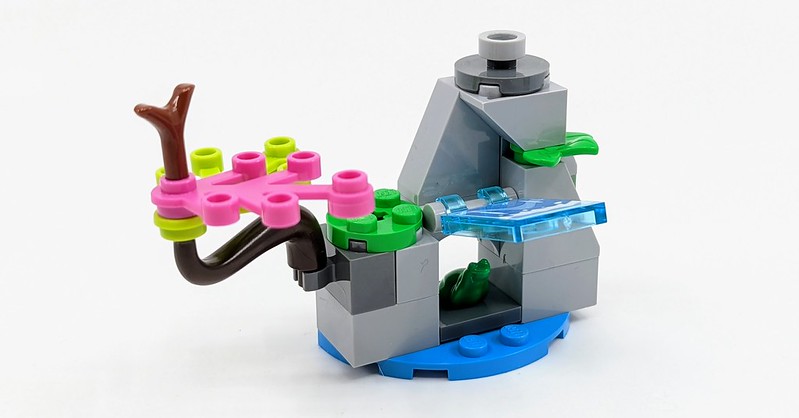 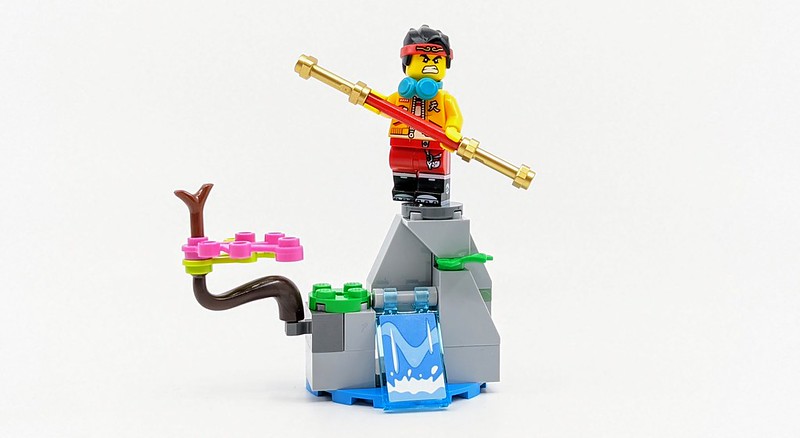 For such a small set, the fact it includes three Minifigures is quite nice. MK isn’t as unique as some of the other versions found in wave 3. In fact, it is the same Minifigure found in 4 other sets. This has MK wearing his old-style jacket and headphones, with his face having either a smirk or angry expression.

It wouldn’t be Red Son’s Inferno Jet, without the crazed inventor there to pilot it. Again this version is very much the same as past ones. With no tweaks to the design and even includes his power glove, along with a fire blast element. I like his facial expressions, one feature a huge grin and the other has him wearing tiny sunglasses, which are a sure sign of evil intend.

Finally, Red Son has brought along a minion in the form of Bob. The Iron Bull Army henchman all look the same, with a transparent red head element under the unique helmet piece. Bob has upgraded to a jetpack, to help him keep up with Red Son’s jet. One of my favourite parts additions to Bob is his simple flame thrower weapon.

As one of the smaller sets in the latest wave, it’s a fairly simple build but the resulting set is fun. I like the little nods to Red Son’s other creations and the small bits of detail dotted around the jet help to give it some character. I especially like grey-tinted flames as they are an unusual take of the normal version of the element. Having three Minifigures is a nice bonus, even though they aren’t as unique as some of those from some of the other sets. 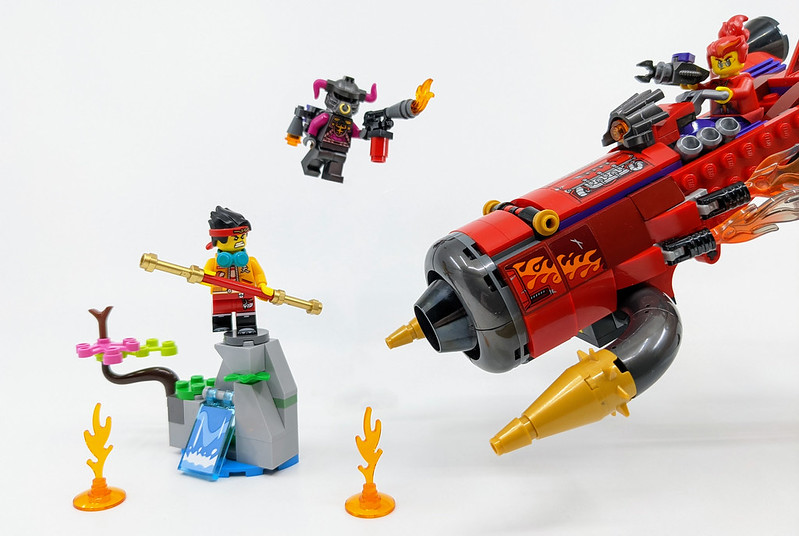