With so many LEGO® sets released this week, there’s plenty to satisfy all sorts of interests. One of the most buzz-worthy themes is an off-shoot of the Marvel theme which focuses on The Infinity Saga. I decided to pick up the Iron Monger Mayhem set, which takes the action back to the very beginning of the MCU. I wasn’t planning on reviewing the set but after building it, I changed my mind. So here’s my review of the LEGO Marvel Infinity Saga set – Iron Man: Iron Monger Mayhem. 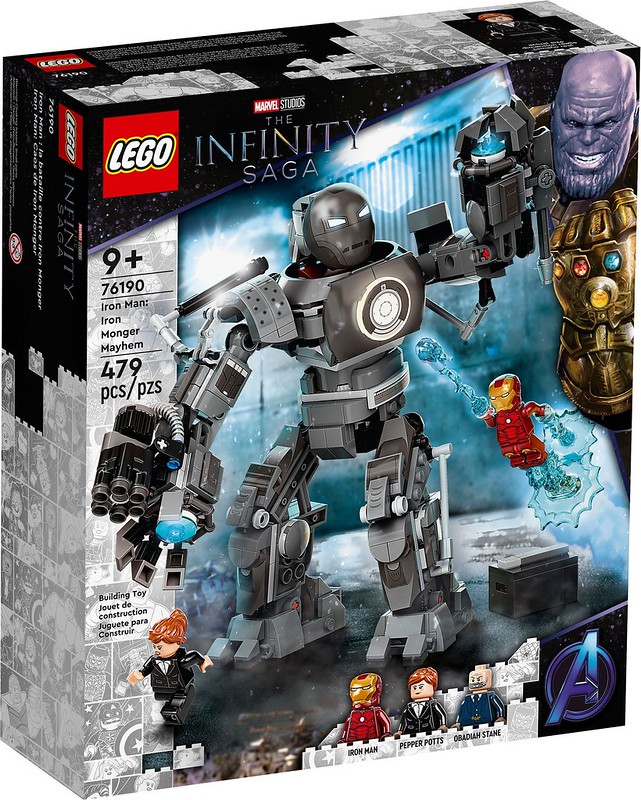 Gigantic Iron Monger mech
Based on classic scenes from the first Marvel Studios’ Iron Man movie, this exciting and engrossing construction toy launches kids’ imaginations into epic adventures with one of Marvel’s most iconic creations – the Iron Monger mech. The mech’s arc reactor glows as kids twist, turn and adjust the mech’s position to fire a 6-stud shooter on the right arm, and a 3-stud shooter on the left arm. Kids can retaliate using Iron Man’s power blasters to rescue Pepper and defeat the mechanical monster. 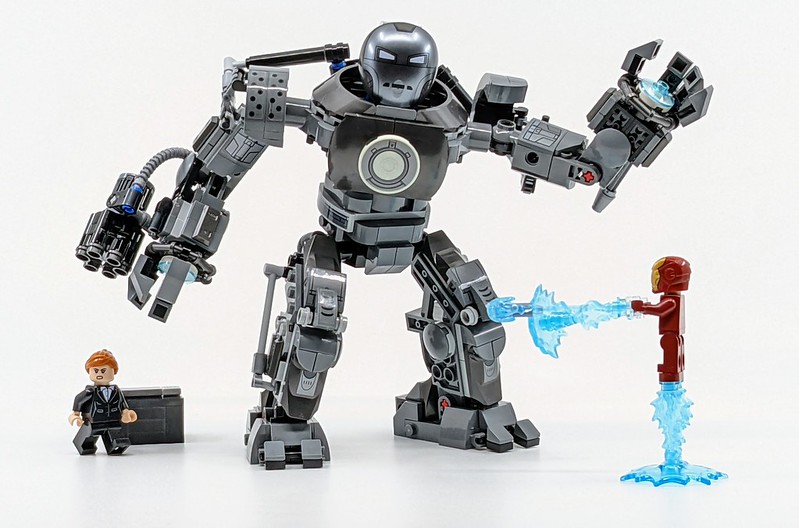 Back in 2008, Iron Man would help to kick-start an adventure that has spanned over 10 years, 20 movies and a massive interconnected universe. But the LEGO sets inspired by that universe didn’t arrive until a few years later. So The Infinity Saga sub-theme is a great way to revisit different moments from the MCU. In Iron Man, Tony Stark invents his armoured suits to help keep himself alive and escape his captors. It also sees him come face to face with the Iron Monger. A huge armoured beast, created and controlled by Obadiah Stane. This suit is much bigger in scale than the Iron Man suit, which has resulted in an interesting set. 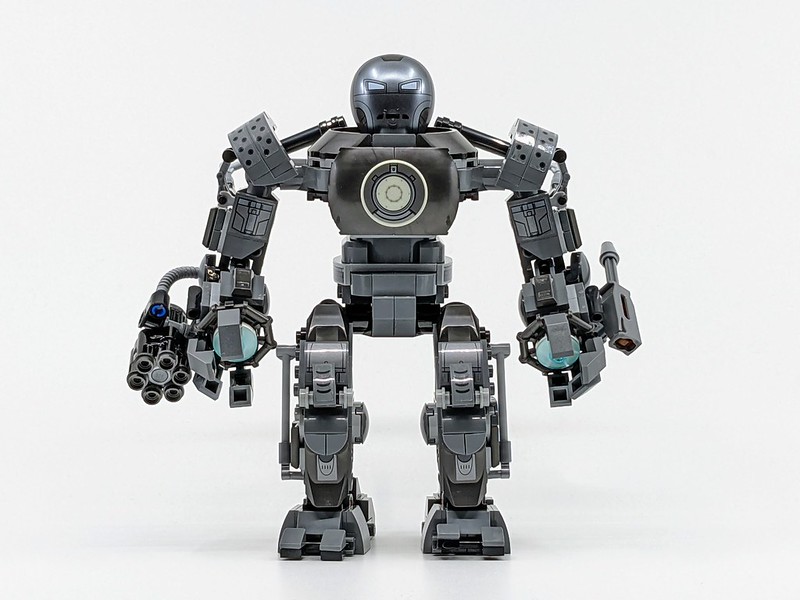 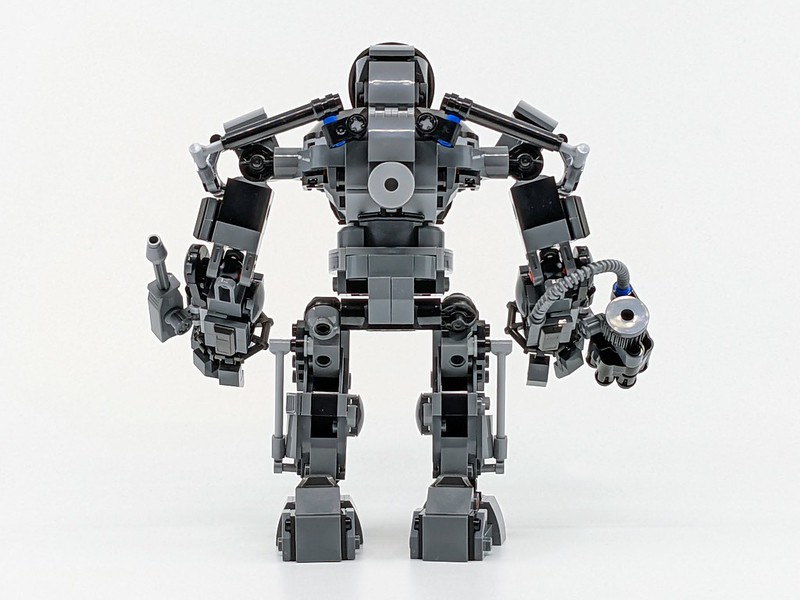 The Iron Monger suit is similar to the Hulkbuster suit from other Marvel sets. One of the most striking parts of the build is the faceplate. This uses a uniquely printed element, normally found in the ‘Constraction’ buildable figures range. Where it is used as a shoulder plate. The shape of the element is perfect for the Iron Monger’s menacing visage. The layering of elements really helps to add to the bulk of the suit, which isn’t as finessed as Stark’s creations. 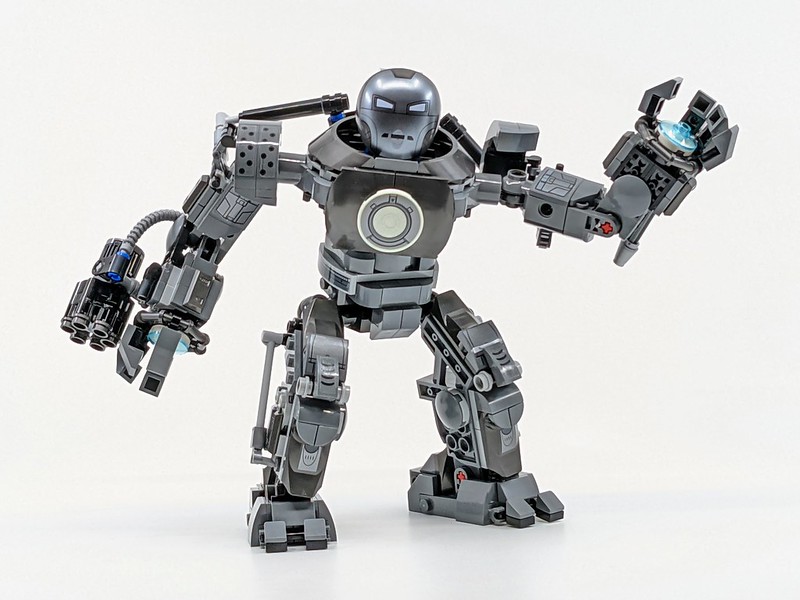 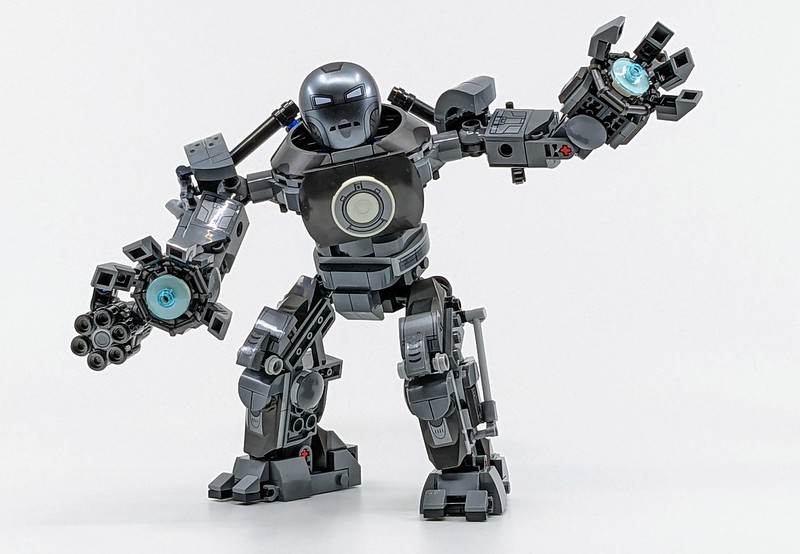 One of the nice things about the build is how many points of movement it has. There are ball joints on feet as well as click joints on legs and arms. Plus there is a turn plate connecting the body to the legs. When combined you are faced with plenty of movement options, which is always welcomed with mech-type sets. 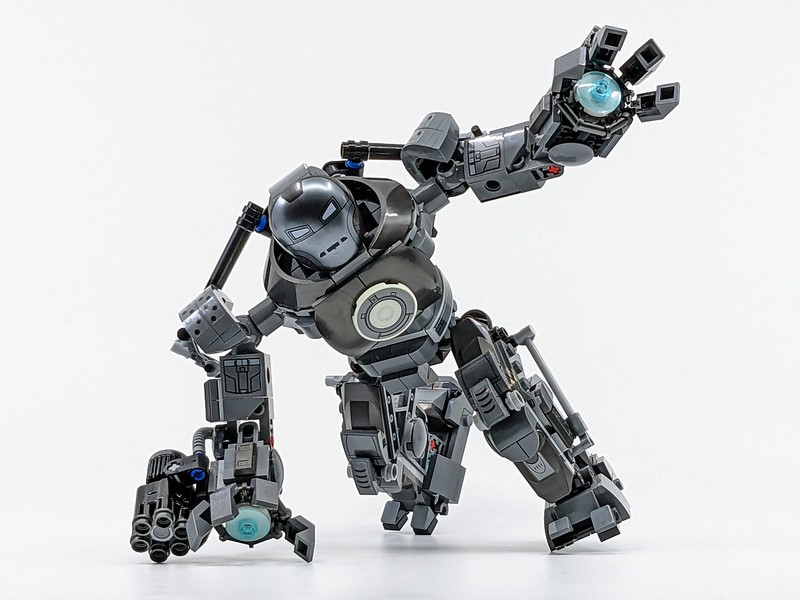 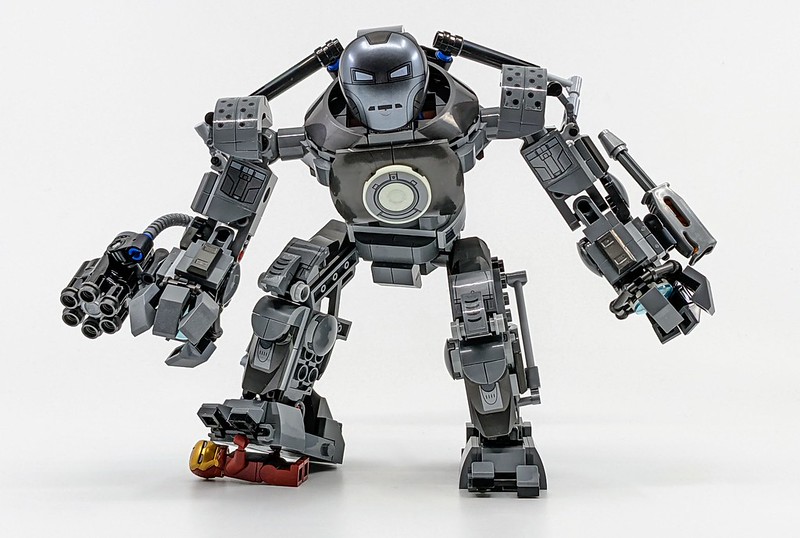 Another great detail is a glow-in-the-dark element used for the Arc Reactor core of the Iron Monger suit. This sits in the chest plate of the armour and features a sticker, but looks great when it glows. In fact, it’s so cool, it’s a real shame that the 2×2 dishes used on the palm of each hand doesn’t use glow-in-the-dark elements as well as that would have really elevated the set. On the subject of the arms, each one features a different piece of weaponry, with one arm including a stud-shooter barrel and the other featuring a rarely used 1×1 plate shooter unit, activated by pushing a Technic axle into the container holding the plates. 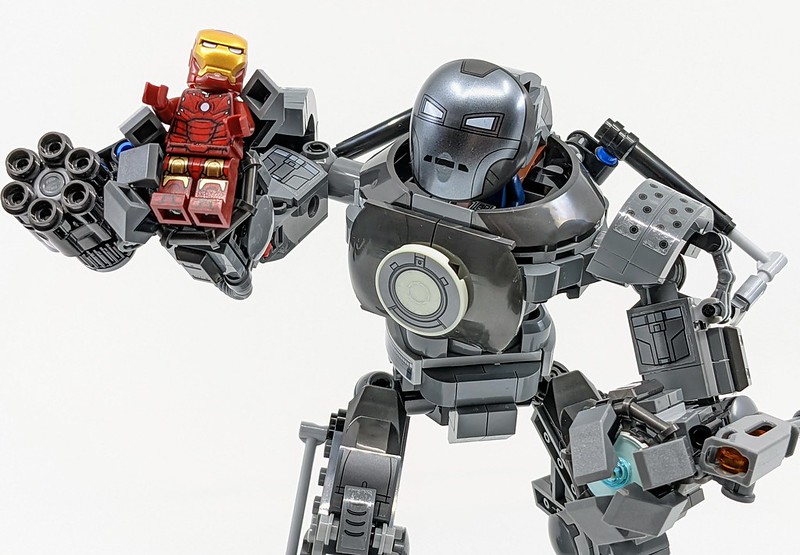 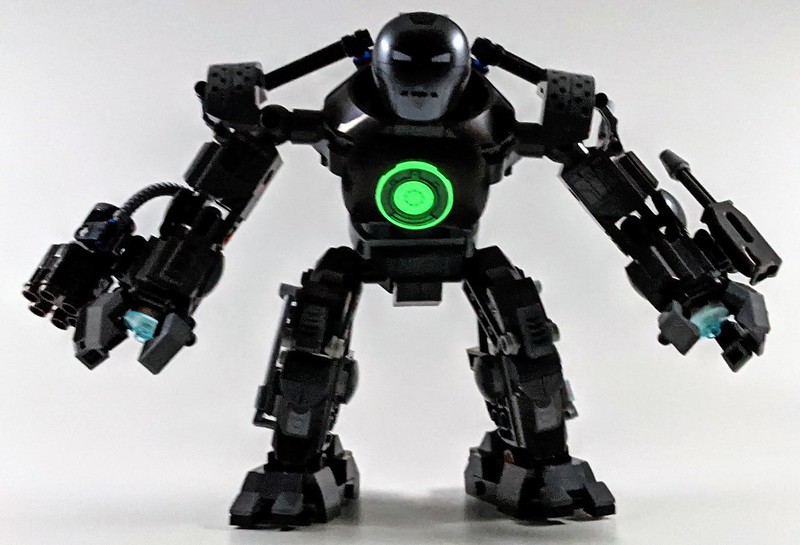 One of the main draws of many sets are the Minifigures, but in all honesty, they play second fiddle to the Iron Monger suit here. That’s despite Jeff Bridges’ Obadiah Stane making his first LEGO appearance. He’s joined by a new version of Pepper Potts and of course Tony Stark in his Iron Man suit. This uses the original two-piece helmet and includes new print detail on the torso and legs to recreate the MK III armour. You can also switch out the helmet for a hairpiece. Plus the various Power Blast elements really help to bring even more action to the Minifigures. The set is available now in the UK, Europe and Asia, it will be available in other regions including North America from August 1st. 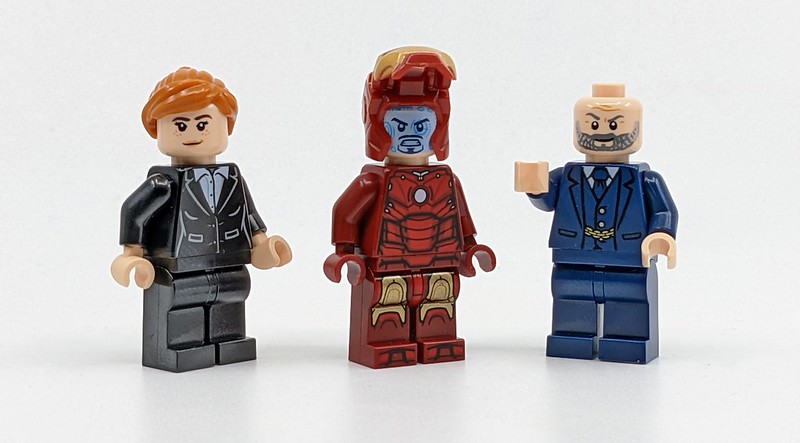 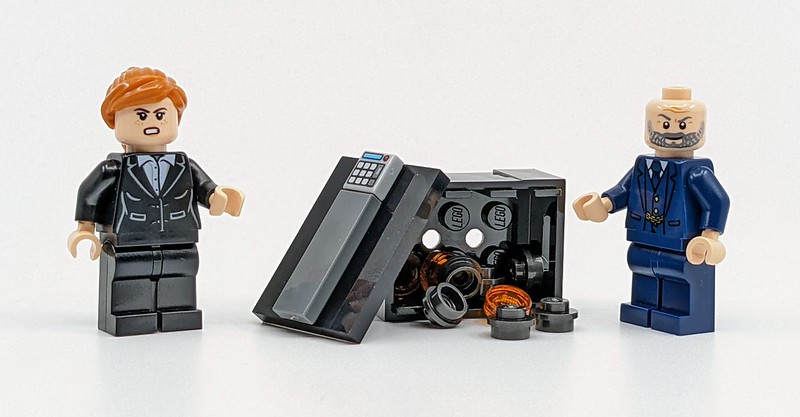 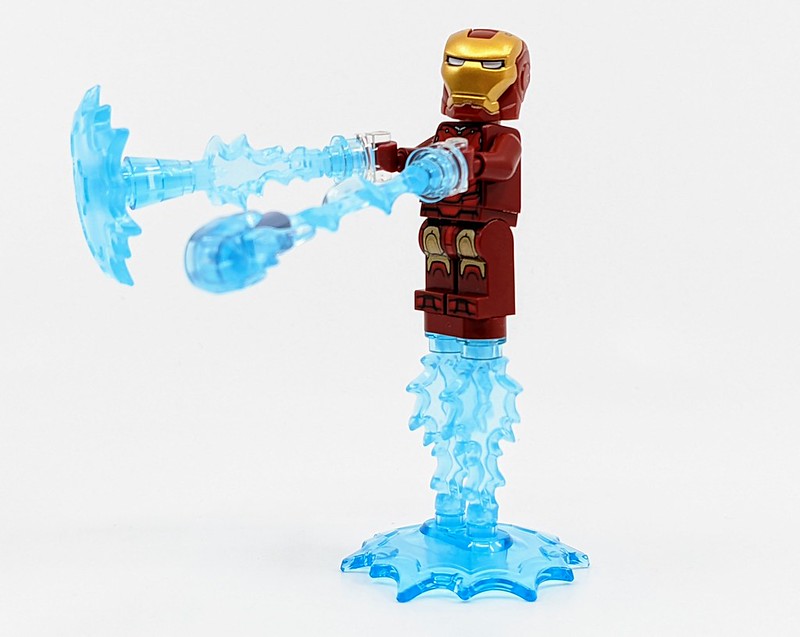