This May, Phase Four of the Marvel Cinematic Universe kicks off with the Black Widow movie. This prequel outing will tell the story of the Avengers most deadly assassin. To coincide with the release of the movie, a single LEGO® set based on the movie will be released this Weekend. Black Widow’s Helicopter Chase, features a twin-blade helicopter, motorcycle, quad bike and three Minifigures based on characters from the Black Widow movie. But is it a great addition to the Marvel range or another super disappointment? Let’s get to the chopper (review) and find out. 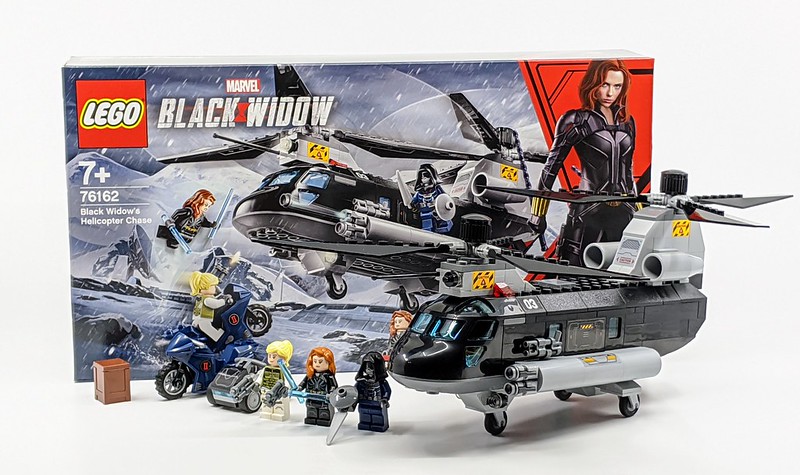 With LEGO® Marvel Avengers Black Widow’s Helicopter Chase (76162), young superheroes can join forces with Black Widow and Yelena Belova to take on Marvel supervillain Taskmaster in his awesome armed helicopter. Superhero action and adventure! Taskmaster’s helicopter has 4 stud shooters and a rifle on each side. The 2 spinning rotor blades give it the power and precision needed to launch an attack. An opening cockpit allows the Taskmaster minifigure to be placed inside, and the cargo area opens to release Taskmaster’s buggy. Yelena Belova has 2 shooters and Black Widow carries 2 sticks as she arrives on her motorcycle. When Taskmaster gets out of his helicopter, he holds a sword and shield. Inspire young imaginations with LEGO Marvel Avengers playsets open up a thrilling universe of role-play adventures. With collectible vehicles, mechs, buildings, minifigures, weapons and gadgets, kids can recreate favorite movie scenes and devise imaginative stories of their own. 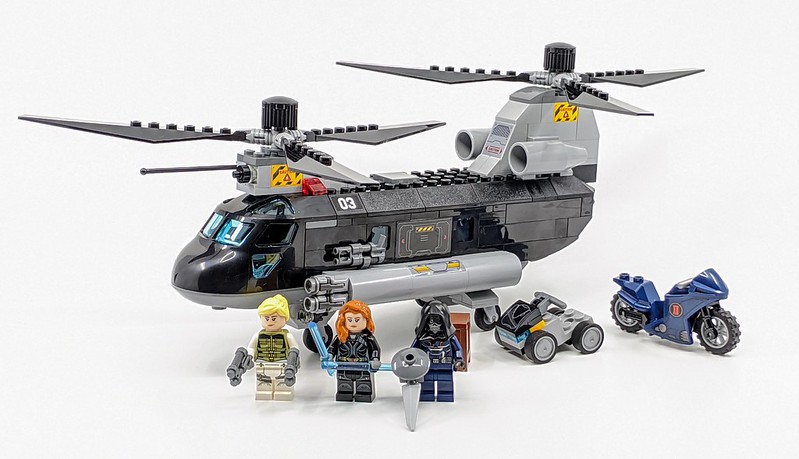 In recent years, the LEGO Marvel range has offered a mixed bag of sets based on the world of Marvel. Set based on the MCU has wildly strayed from actual events seen in the movies which have inspired them. Other sets have given us some decent Minifigures, but these are often based on their classic comic book looks. It’s difficult to tell if this will be a faithful representation of events from the movie, but judging by the trailer it seems like it could be, at least in part. The main aspect of the set is a buildable twin-bladed helicopter. Now choppers have certainly be featured in numerous LEGO sets over the years. They are also one of the go-to vehicles, especially into the Super Hero themes. The helicopter is a nice blend of black and grey elements, which not only help to identify that it’s bad guy’s ride but also grounds it in the realistic realms of the MCU. 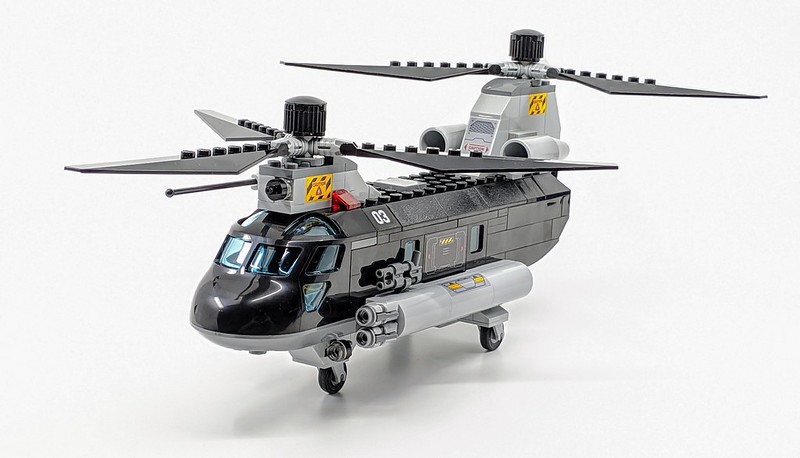 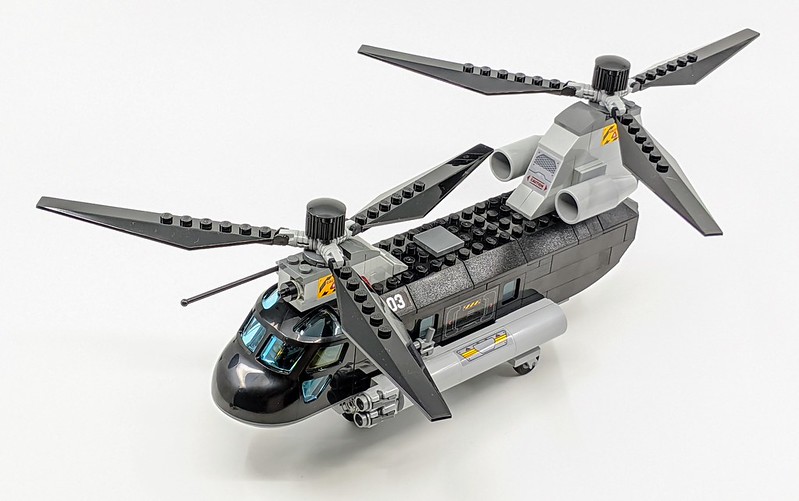 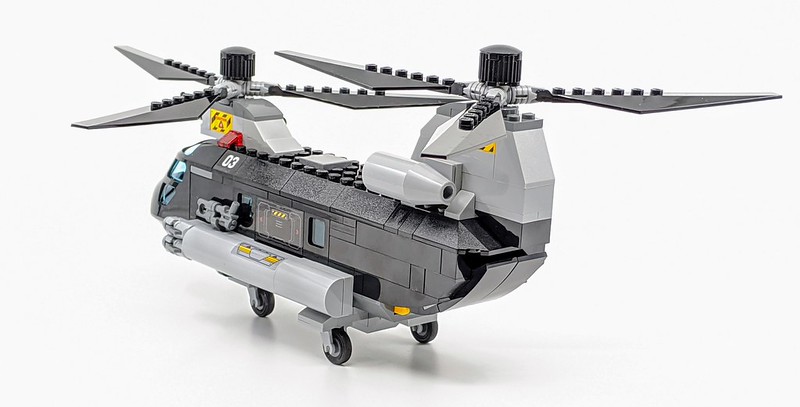 It’s build is very similar to other LEGO helicopters, in fact, it almost reminded me of some of the very first LEGO sets I had as a kid. The cockpit section is a single moulded piece, with a clip in window section. This can be removed to access a small control terminal. The mid-section of the roof can also be removed to access the inner section of the helicopter. There is enough room here to store the included quad bike. You just need to make sure the handlebars are folded down and you position it so the highest point of the quad, sits within the roomy part of the roof panel. 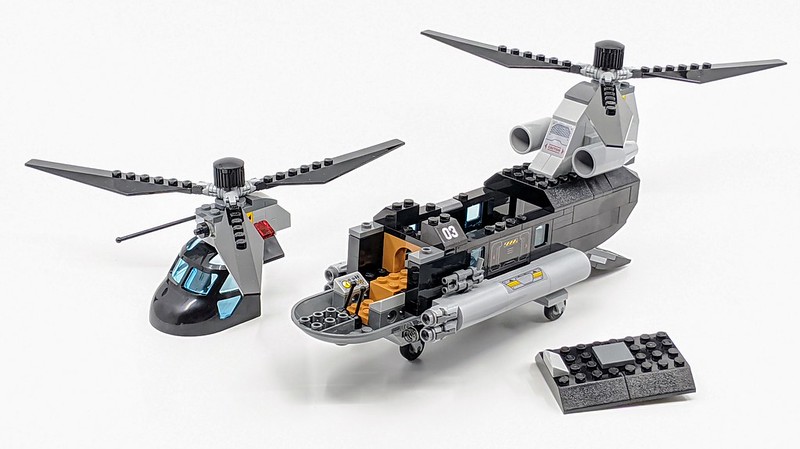 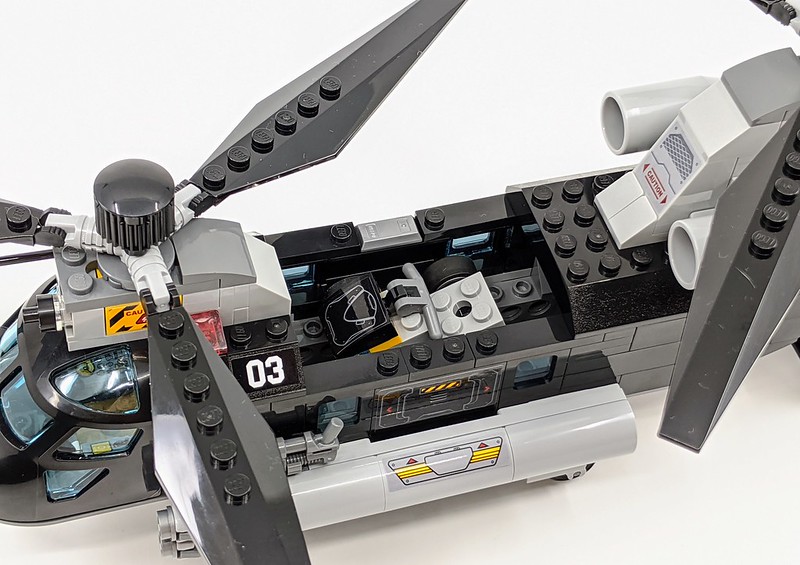 I really like how the two rotor blades have been done. Those yellow bricks you can see on each rotor are actually a couple of crates. So they house the end section of rods, used to connect the turning mechanism, but blend it perfectly. The rear blades also have a pair of classic engine elements, which work nicely within the overall look of the helicopter. There are a few stickers included in the set, most of which are used on the exterior of the helicopter. These are all easy to attach and add much-needed detail to a fairly muted colour scheme. I also really like the two rounded columns, which run along each side of the helicopter. They help to give the helicopter a much more substantial look. 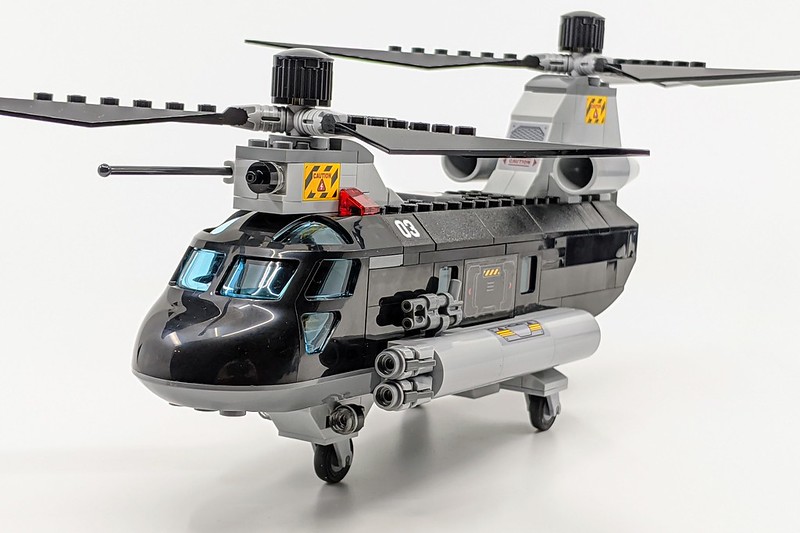 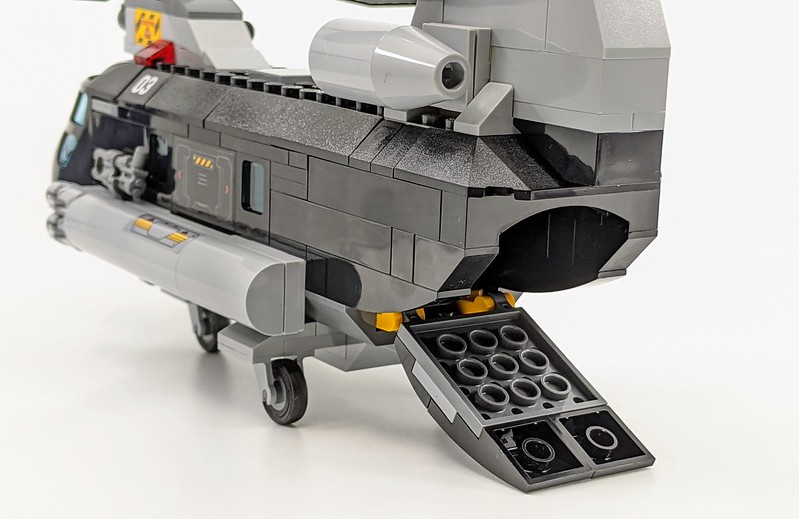 As well as the helicopter, there are also a couple of smaller vehicles. One is a motorcycle, this uses a frame section, with the body of the bike clipping over it. There are a pair of stickers attached to each side of the motorcycle, these feature the Black Widow logo. It’s a simple build and looks nice, thanks to the modern appearance. The second buildable element is a very small and compact quad bike-type vehicle. This is also a very simple build, but it looks quite cool for that very reason. Finally, there is also a crate of treasure because all bad guys love riches.

The set contains three Minifigures, including title character Black Widow aka Natasha Romanova, her former Red Room ‘sister’ Yelena Belova and the exceptional mimic, Taskmaster. All based on the characters appearances from the movie. As the movie takes place after the events of Civil War, Natasha has a similar appearance to her earlier looks in the MCU, which results in a rather familiar-looking Minifigure. She includes her electro batons weapons as past Minifigures have. Black Widow is very similar to the one featured in the original Avengers sets, although her outfit is a little more in-line with the characters comic book look.

Yelena was also trained as a KGB assassin and joins forces with her former comrade during the events of the movie. In the comic books, Yelena also takes the mantel of Black Widow. Her appearance matches that of the character seen in the trailer, although the green seems a little lighter than in the trailer. I like that she looks different from Nat, as they are both Black Widow agents, it would have been easy to just give them the same bodies. 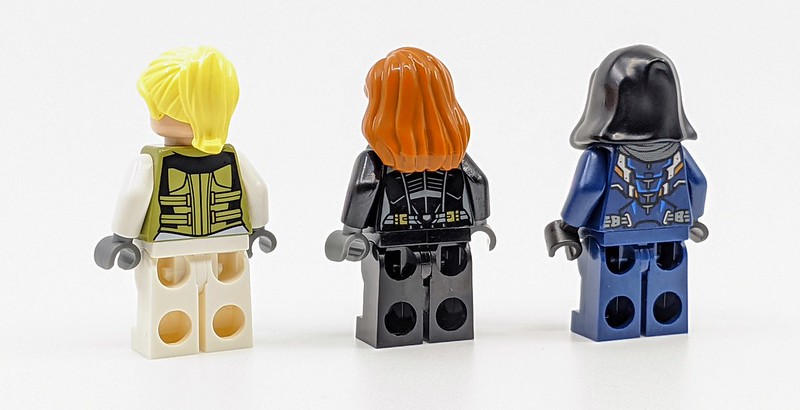 Finally, there is famed Marvel antihero, the Taskmaster. This masked troublemaker has the ability to instantly copy the movements and fighting style of his foe. The character has had a rather iconic appearance in the comics, in the Black Widow movie, this is a little more grounded. The skull looking mask isn’t as pronounced as past looks. The Minifigure seems to have captured the movie-style quite well, although I almost thought I had the wrong head or a misprint when putting the character together. Although we haven’t seen the character sporting a hood in the trailers, the Minifigure does, which is a nice nod to the comic book style. The character also includes a sort of sword and shield combo weapon, which is a surprise as in the trailer he has a bow.

It’s tricky to say how accurate the set is compared to the movie, but as we have come to learn, this is always the case with Marvel sets these days. From the trailer, it seems like it could be part of the story at some point. The build of the helicopter is quite nice, nothing special in terms of technique or elements, but a decent enough overall build. The Minifigures are a nice addition to the Marvel range, but I would have instantly dropped the two smaller vehicles for a Red Guardian Minifigure, a re-coloured Captain America mask would have worked perfectly for the character. I understand why it features the characters its does, Natasha is that title character, Taskmaster is the villain and as the movie is a female lead outing, Yelena seems like a better fit than another male character. The lask of Red Guardian is just a disappointment, as it’s unlikely the character will appear elsewhere. All in all, I like that various superhero movies are supported by these sort of single releases, this certainly isn’t one of the most fun but I enjoyed the build none-the-less. 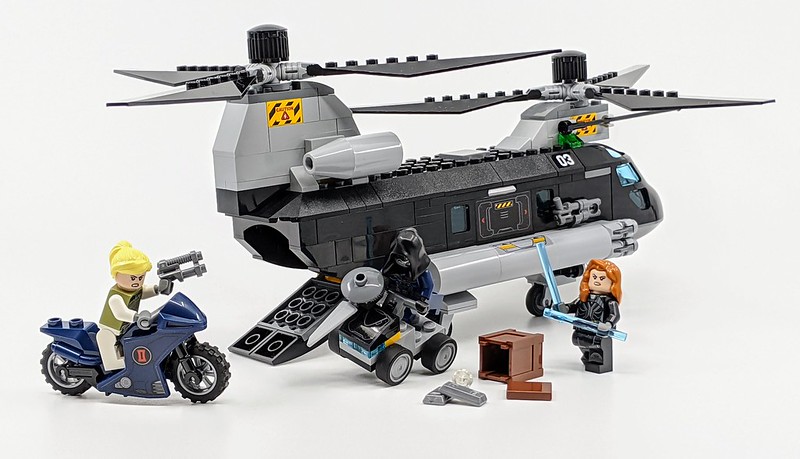