For many The Empire Strikes Back is the pinnacle of Star Wars movies. It’s also the first appearance of a menacing Imperial Droid which helped Vader and the Imperial Fleet to locate the hidden Rebel Base on the sixth moon of the Hoth system. As Han and Chewie investigate a recent meteor strike on the snowy plains of Hoth, we come face to face with the Imperial Probe Droid. Now, this tool of the Imperial Forces has been recreated for the latest addition to the adult-focused sets from the LEGO Star Wars range. It’s a unique blend of past sets, making it similar to past brick-built characters such as the Porg, BB-8 and D-O and the displayable Helmet Collections sets. So ahead of the release of the set next month, here’s my review of the LEGO Star Wars Imperial Probe Droid set. 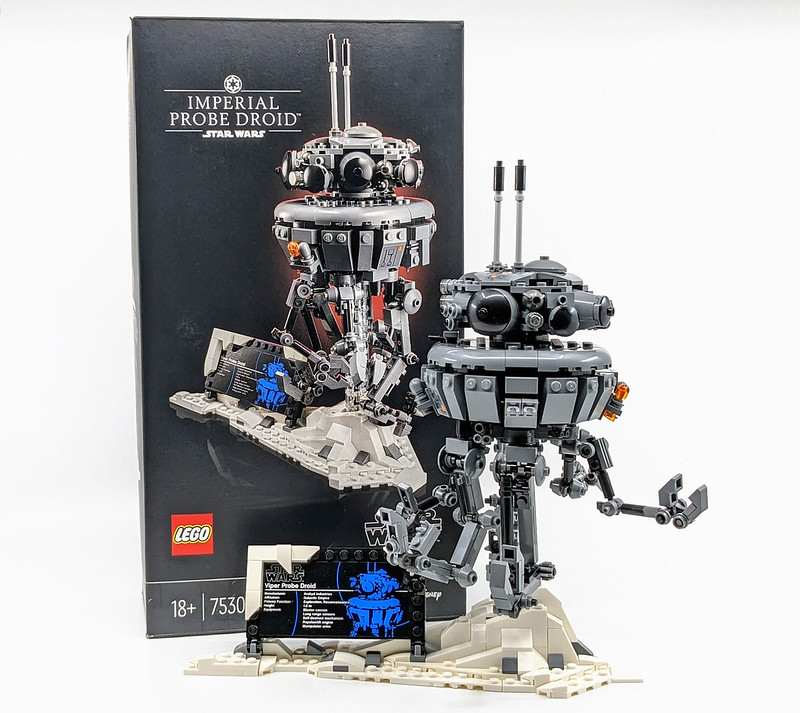 Recall epic Star Wars: The Empire Strikes Back action on the ice planet Hoth as you build the Imperial Probe Droid (75306). The droid has posable legs and comes with a transparent, brick-built pole to ‘suspend’ it above a buildable snowy scene. An information plaque completes a highly collectible display piece that looks impressive on an office desk or a mantelpiece at home. Part of a premium-quality collection of LEGO Star Wars sets for adults, this complex, construction kit offers an immersive and fun building experience as you recreate every distinctive detail in LEGO style. It makes a delightful treat for yourself and a fun gift for a Star Wars fan or experienced LEGO lover in your life. 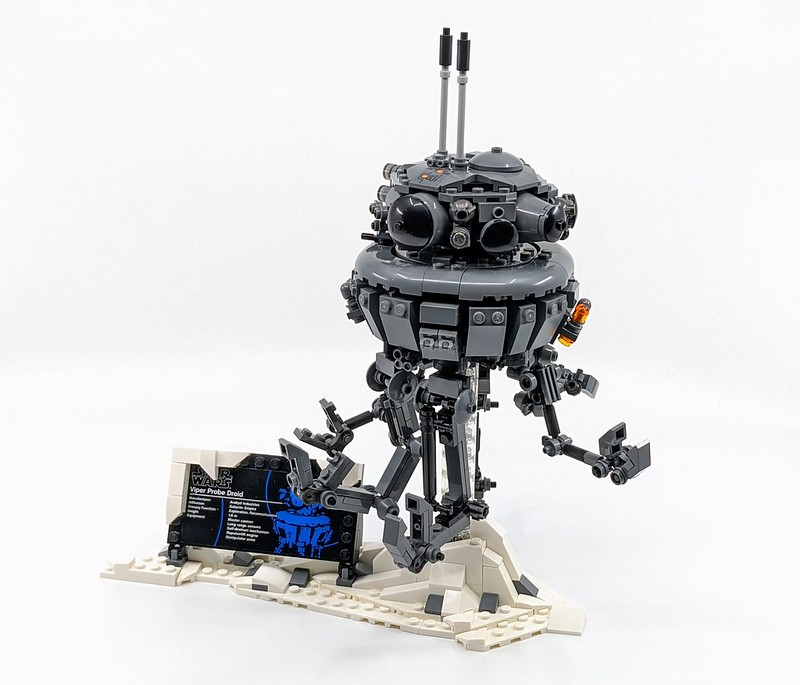 A quick mention for the Instruction Booklet before getting into the build. It opens with a brief introduction from LEGO Star Wars Creative Director Jens Kronvold Frederiksen. But it’s the instructions pages that will have the most interest as they are set against a grey background. Most previous 18+ sets have used a black background, which wasn’t great for showing darker elements. I quite liked the black but can fully understand and welcome the need to switch to a lighter colour for the pages. 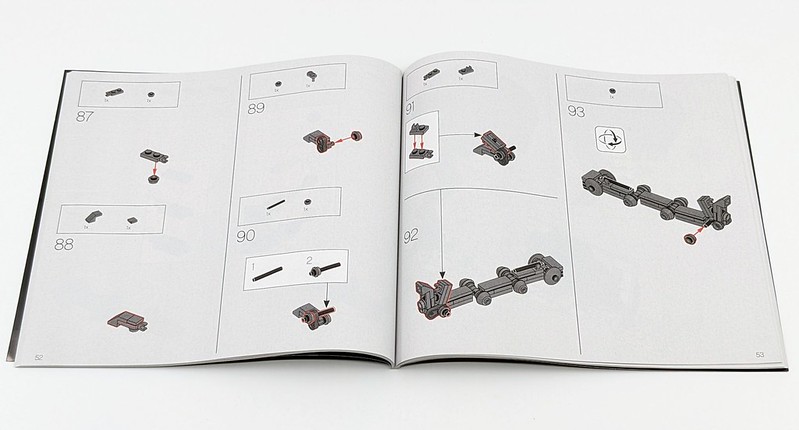 Although the set is being released alongside two new additions to the Helmet Collection, it’s actually classed as a brick-built character. So it’s almost in the same vein as the various constructible characters which have included creatures and Droids from across the Star Wars galaxy. There are two components to the set, a themed base which includes a UCS style information plate and then the actual Droid. 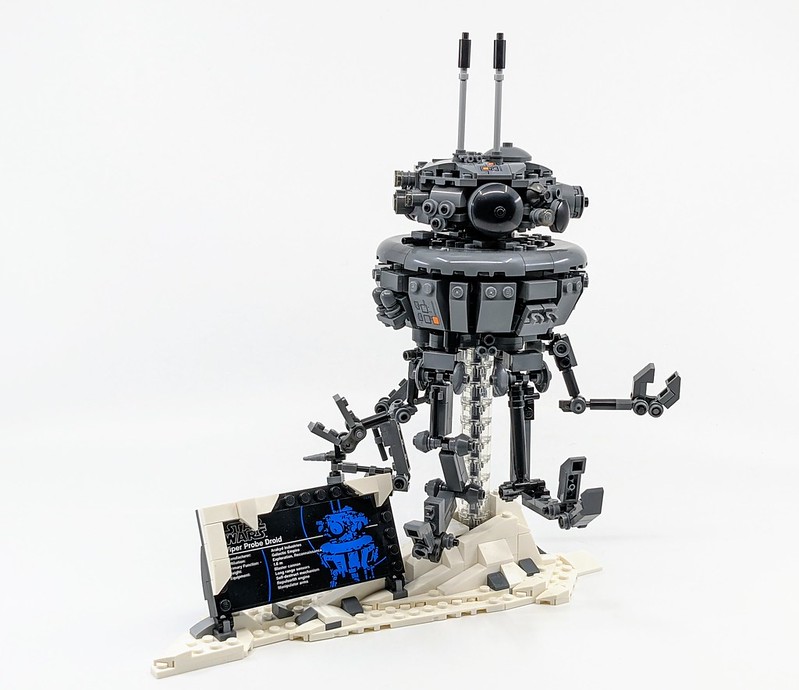 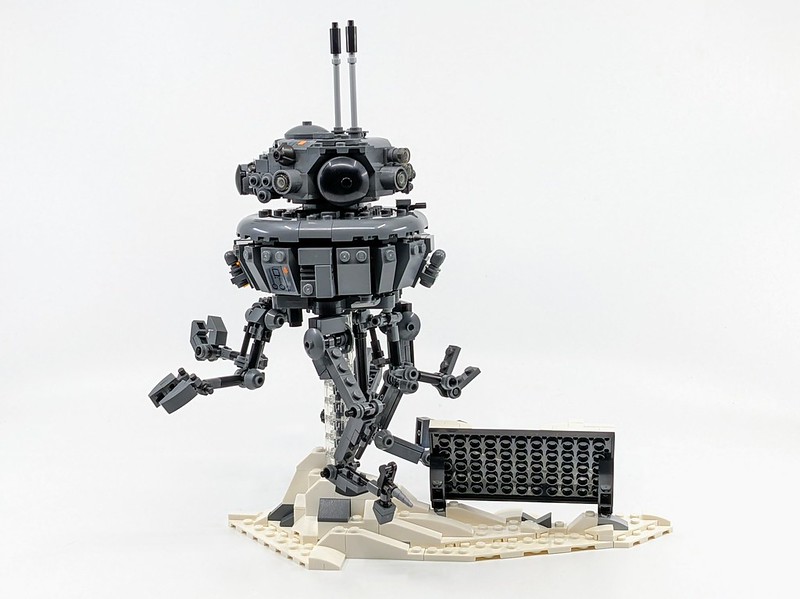 Due to the nature of the set, the display base is far more substantial than any past Star Wars set. It includes a black plate, which is used to display a few basic facts about the Probe Droid. These have been a staple of the UCS sets and have also been included with the smaller brick-built characters. However, here it’s been cleverly incorporated into the snowy mound used to hold the Probe Droid. So there are dabbles of snow draped over the information plate. 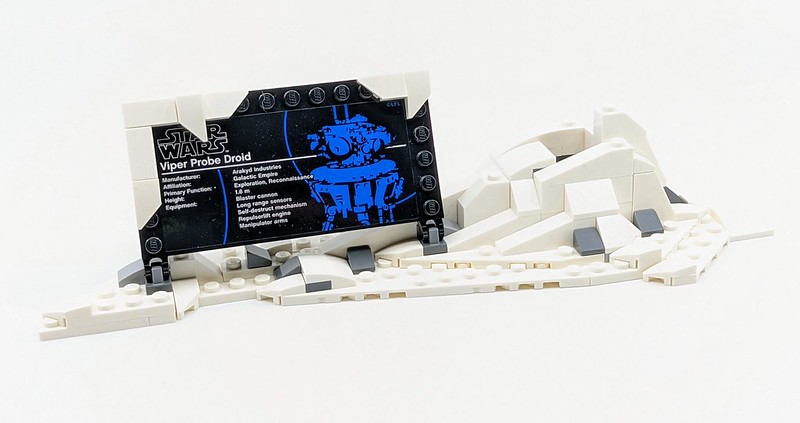 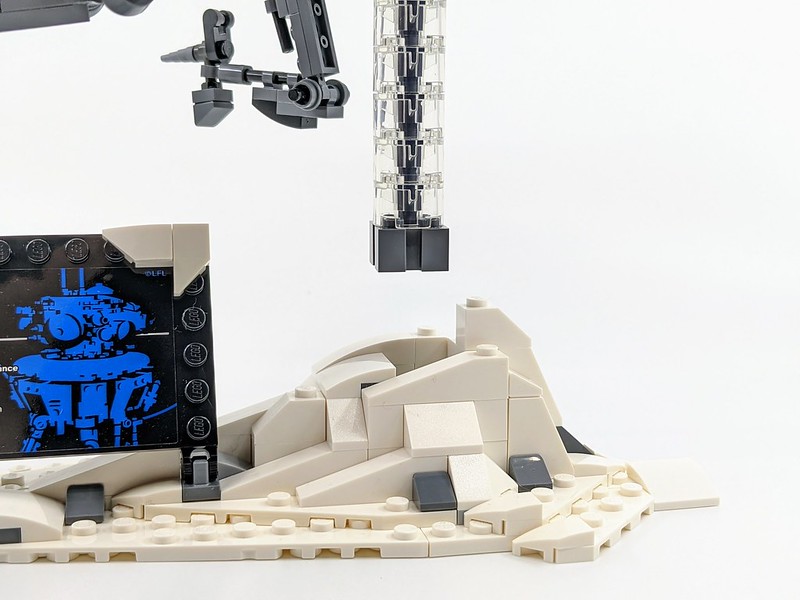 For those familiar with a Probe Droid, they hover around, which makes them a little tricky to pull off in LEGO form. A stack of transparent 2×2 round bricks, with a long Technic axle running through them acts as a stand to elevate the Probe Droid. This clear rod of bricks slots into a 2×2 space on the display base, but doesn’t connect via any clutch power. 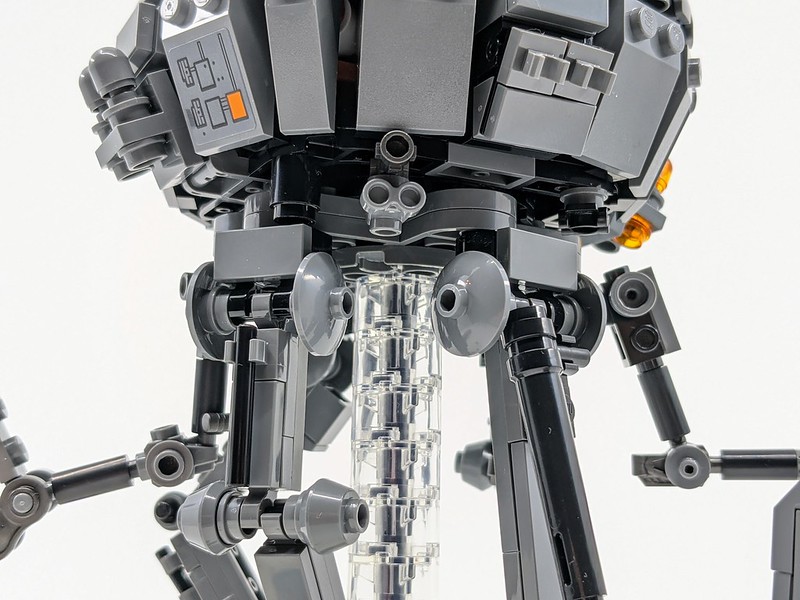 The Imperial Probe Droid is constructed in three parts, the lower body, the head and a collection of tentacle-like arms, which give the Probe Droid its iconic look. Now you may be thinking, why is it grey? Aren’t Probe Droids black? Well, actually no, they are not black. When we first meet the deadly Droids on Hoth, they do look quite dark and to be fair their colouring is probably a little darker than the shade of brick used here. But the largely dark grey elements used are a close enough fit and if the whole thing was black its features would be less defined. 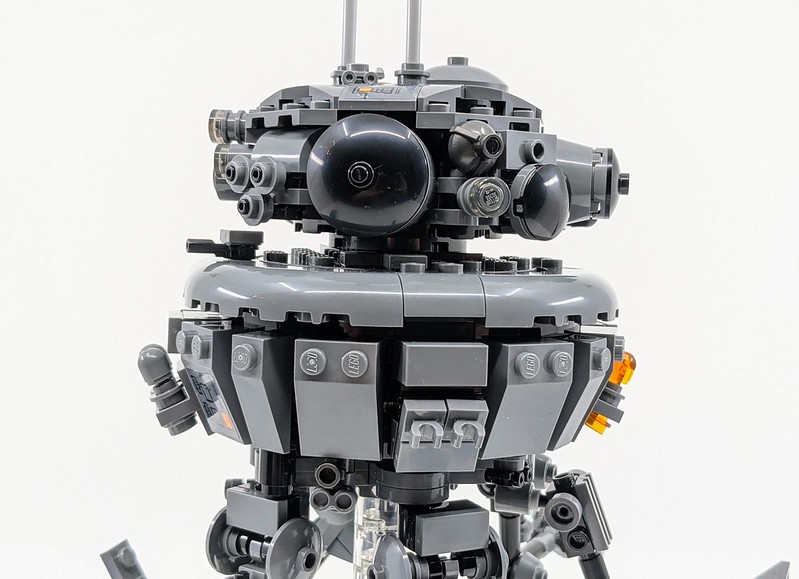 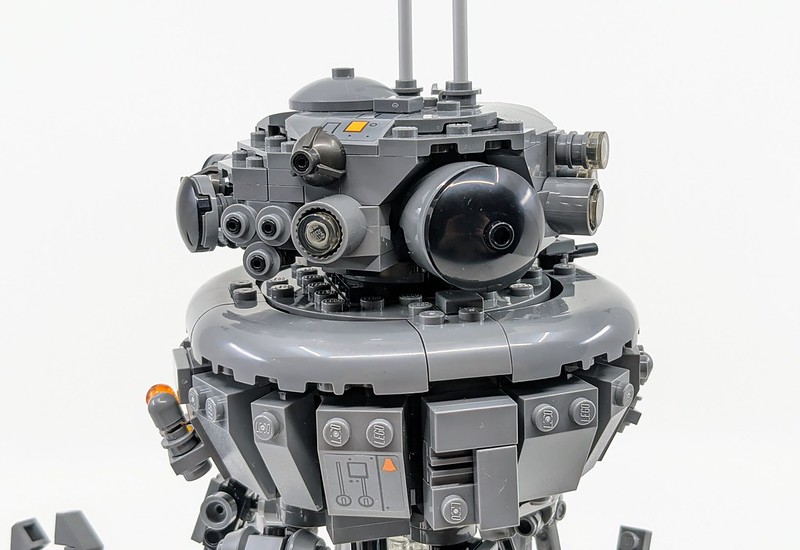 To capture the circular shape of the Imperial Droid, a mixture of connection points are used on the lower body section. So the four ‘compass’ points have the 2x2x1 bricks used in all the BrickHeadz sets with the spaces in-between using a mix of sloped bricks clipped to the four anchor points and then smaller sections connected to a 2×2 jumper plate. The combination of these give an angular but fairly round edge to the bottom section of the build. The wheel arch introduced for the VW Beetle has been recoloured and used to trim the top section of the Droid. This greatly helps to finish the overall shape of the set. 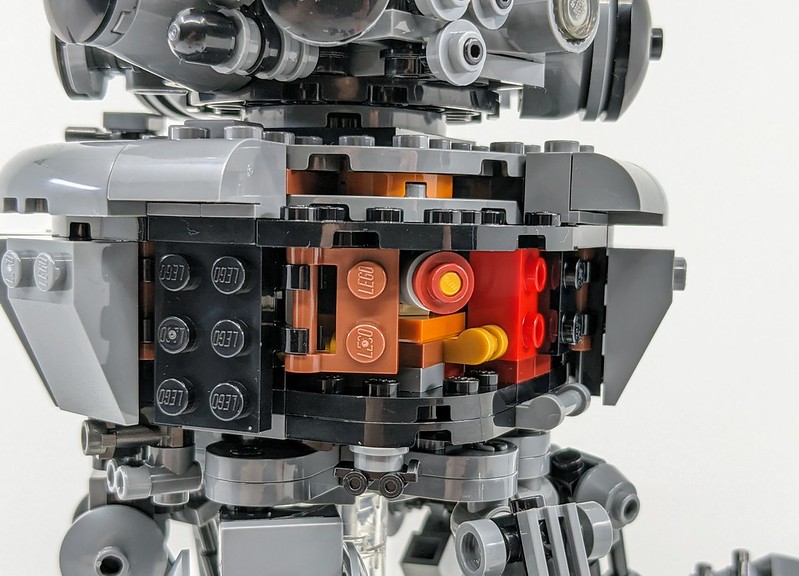 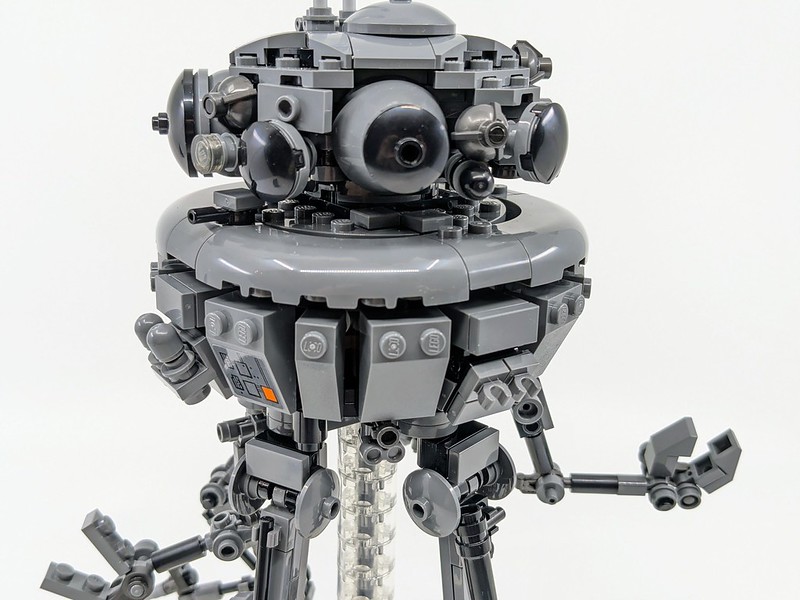 Now the various arms which sit beneath the Droid are all connected and created in different ways. Some use a simple clip arm and a rod, which doesn’t offer the best friction. This can cause some of the arms to sag and not stay in position. But this is meant to be a display piece over being played with, so the arms shouldn’t really be moved around that much. However, a stronger connection would have been nice but I can’t think of a better way to implement the arms into the build. 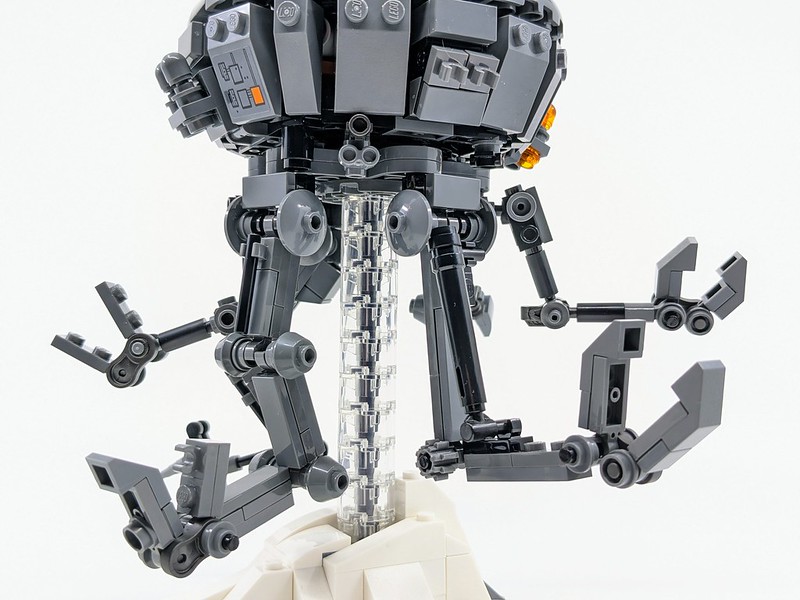 The head section is built separately from the body, which allows it to be rotated as the ‘real’ Droid would do. It’s simply connected via a turntable plate. It’s almost built in a similar fashion to the body but there are far more sections that are clipped into place via a number of 1×1 plates with shafts. 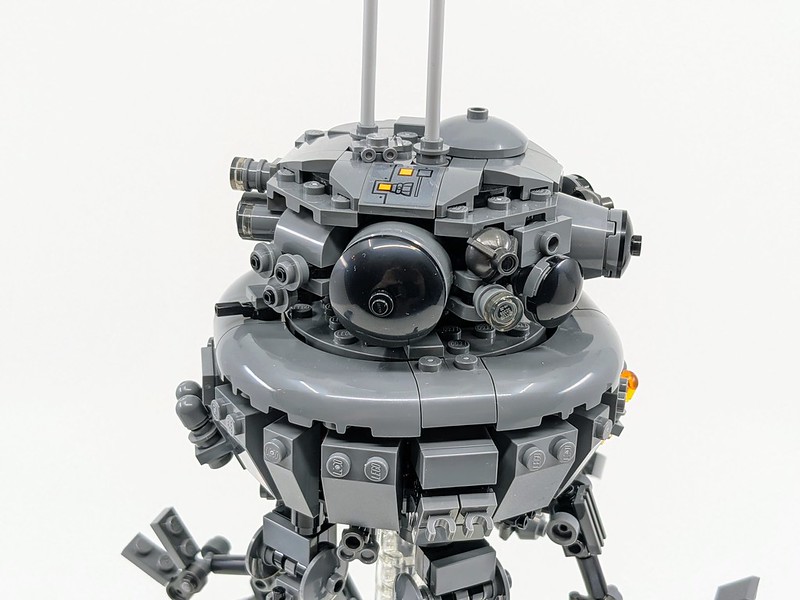 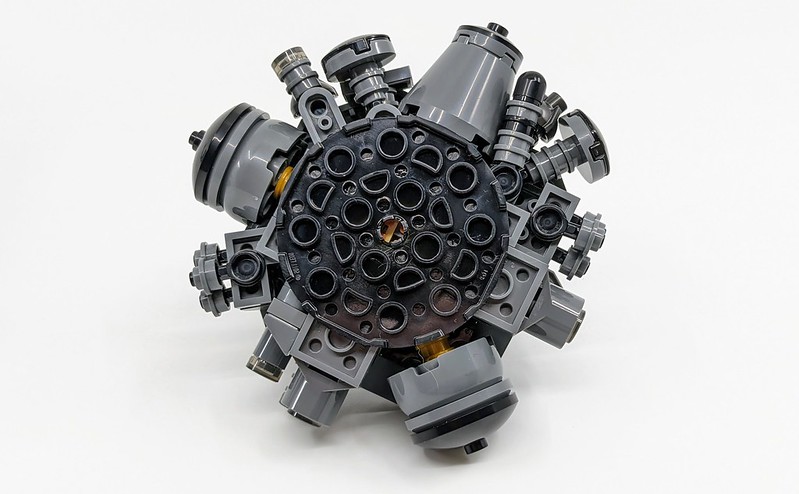 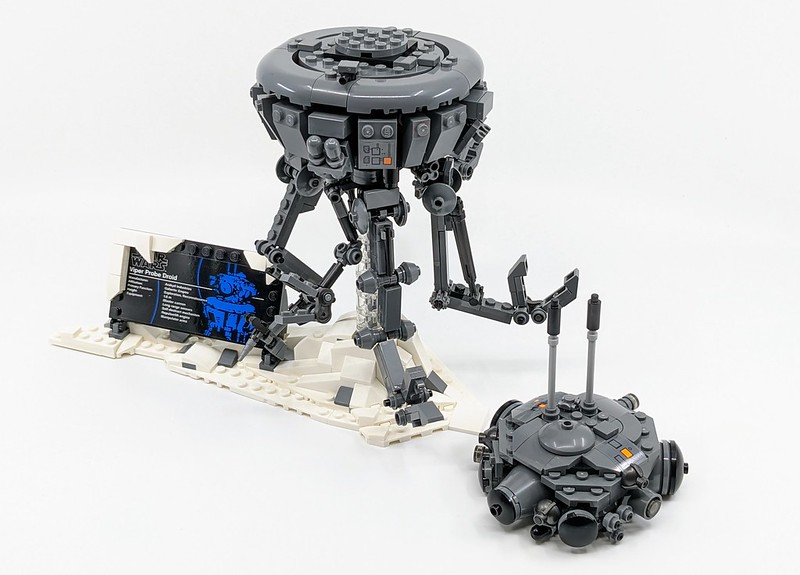 I’ve always been a fan of LEGO builds which can be displayed. Previously all LEGO sets have had to have play in mind. But thanks to the 18+ range, sets like the Probe Droid are now possible. It’s purely a display piece, sure aspects of it can be turned and posed in a limited manner, plus the snow entrenched display plate feels a little ‘cartoony’ but I like that we are getting these like this from the Star Wars theme. Over the last 20 years, the need to cater for play and a limited amount of wide-scale source material has left the theme recycling old ideas too often. The Imperial Probe Droid is something unique. Far more intricate to build and offers a pretty cool item to display on a shelf or desk. I did think the colour choice was odd but after rewatching Empire Strikes Back as I built the set and the brief introduction to the source material in the instructions, the Probe Droid isn’t entirely black just very dark grey. 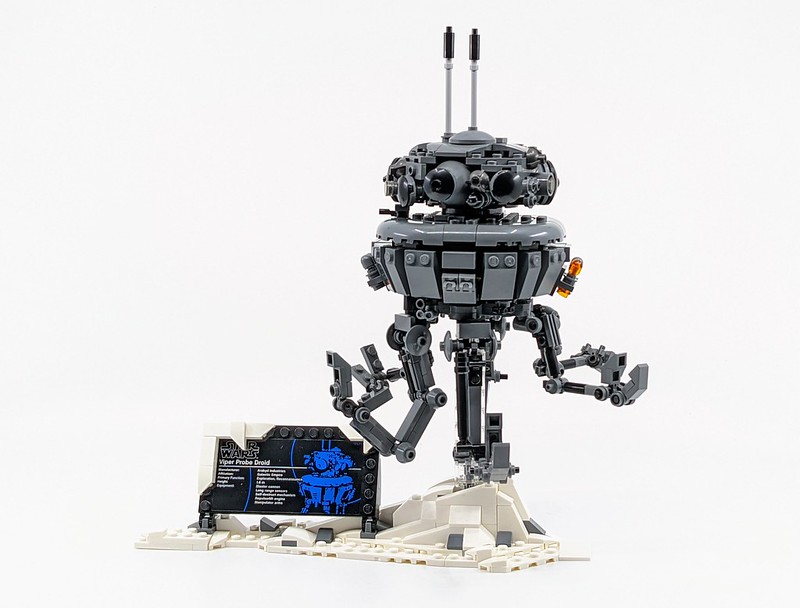