The original Star Wars films gave us the loveable Droids, R2-D2 and C-3PO. The prequels introduced Battle and Pit Droids, and the latest trio of Star Wars adventures have continued to introduce new Droids with both BB-8 and most recently D-O. Apart all being Droids, they have all been recreated in LEGO® form over the last 20 years. In recent years, buildable Droids have upped their game, to create fun, detailed display pieces with interesting ‘play’ functions and the set I’m taking a look at today is no different. Is this the Droid you’re looking for? Let’s find out. 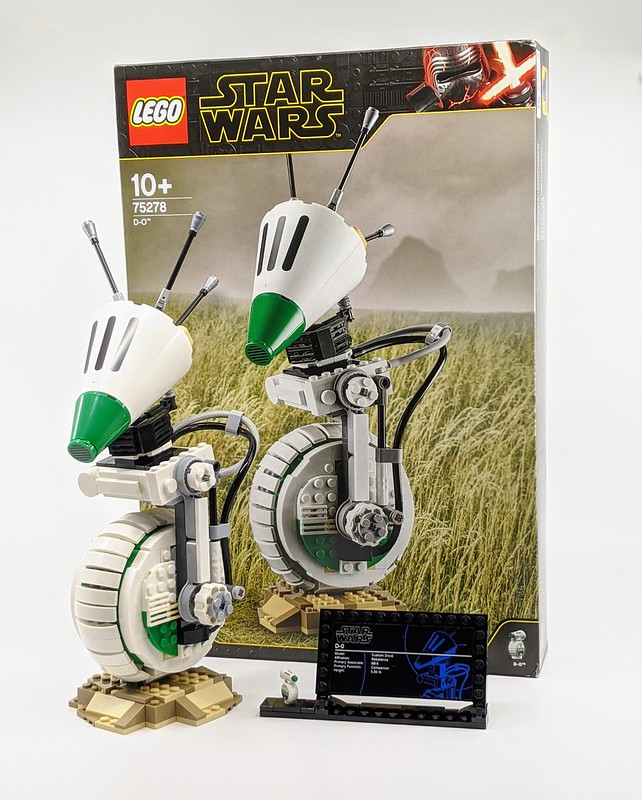 Spark memories of exciting Star Wars: The Rise of Skywalker movie scenes with this cool collectible LEGO Star Wars D-O (75278) droid building toy. Authentic details of this loveable Star Wars character are superbly recreated with LEGO bricks and fans will be delighted by D-O’s 360-degree-rotating and tilting head, and posable antennas. This D-O droid build-and-display model is new for May 2020 and makes a delightful addition to any Star Wars fan or LEGO Star Wars droid robot collection.

This collectible LEGO building set is designed for display: it includes a built-in stand for the construction droid model, plus an information sign with a cute D-O droid minifigure to make an eye-catching display at home or in a workplace. 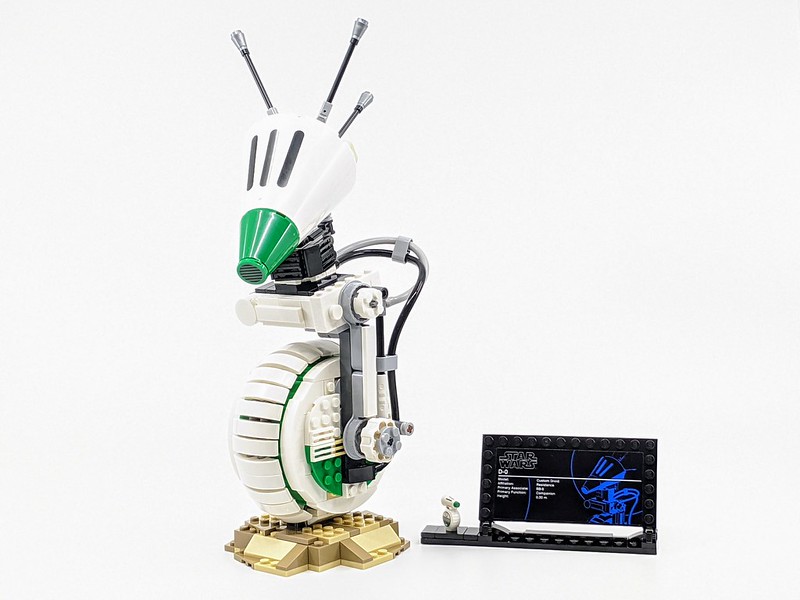 Whatever your thoughts on the new Disney era Star Wars films might be, you have to admit that they have introduced some decent supporting characters. For the closing chapter of the Skywalker Saga, we got to met another new little Droid known as D-O. We first meet this usual looking Droid on Pasaana, in the abandoned ship of a Sith Assassin. This nervous little Droid may not have had as impactful role as BB-8 did, but the usual appearance of D-O does make for a rather cool LEGO build. 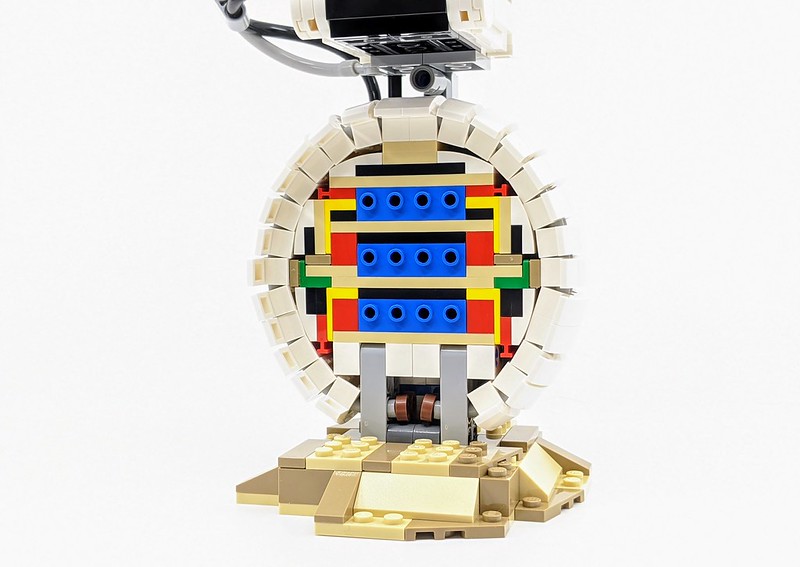 The build is split across 4 bags and begins with the Droids uni-tread disc. On the surface this looks quite simple but is actually a rather clever bit of LEGO construction. A series of single bow plate elements and 2×1 dual holed bricks are fed on to a pair of grey flexible tubes. At each end is small box-type construction. These act as an anchor to connect the uni-tread to the base and as a way to complete the circle of the wheel like structure. The whole thing wraps around a central disc of bricks, this gives the circle a perfectly round shape. This central disc also gives you a surface to add the outer shell of D-O. The anchor point at the base of the uni-tread is hidden nicely with a mixture of bricks to give the impression of D-O being balanced on a piece of sandy ground. 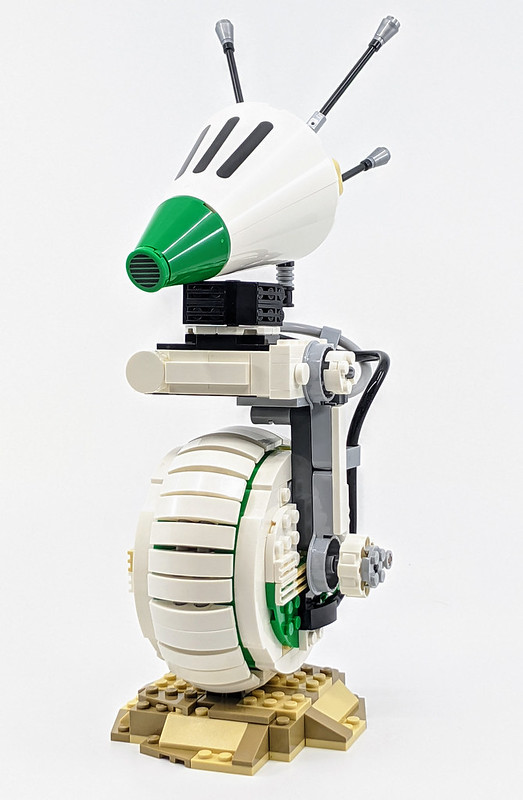 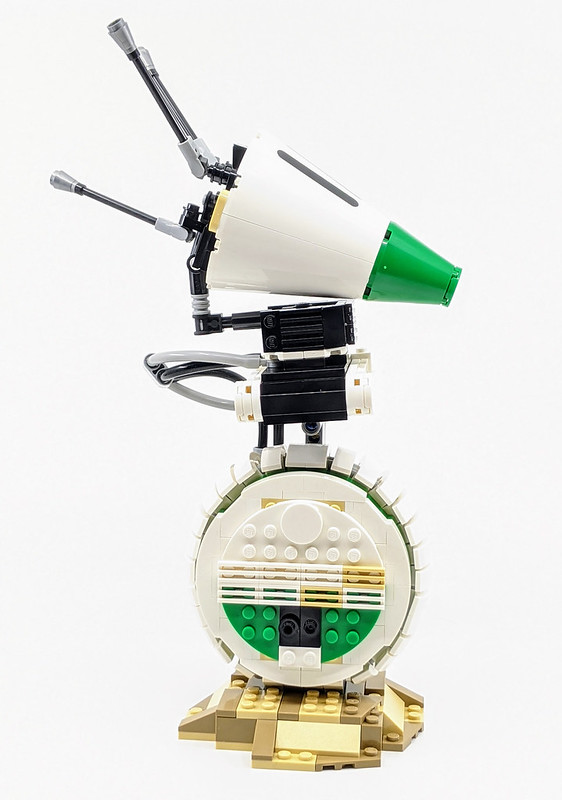 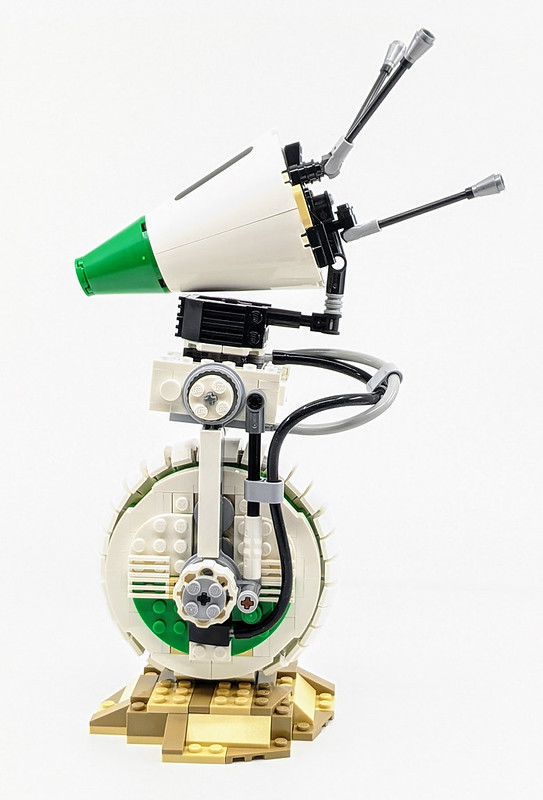 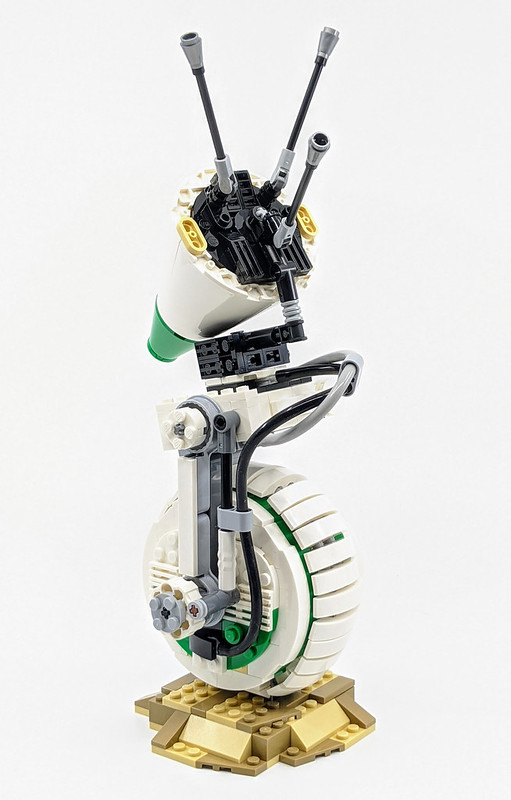 The appearance of D-O is best described as a unicycle, so that central wheel is topped by a coned head, connected by an arm on one side of the Droid. This arm is where the play functions are found. The dial on the lower section of the arm rocks the head sections back and forth. Whereas the dial on the platform near the head allows you to twist the head in a 360° circle. Thankfully the mechanism to achieve this is very simple, which means the build isn’t unnecessarily bulked out. 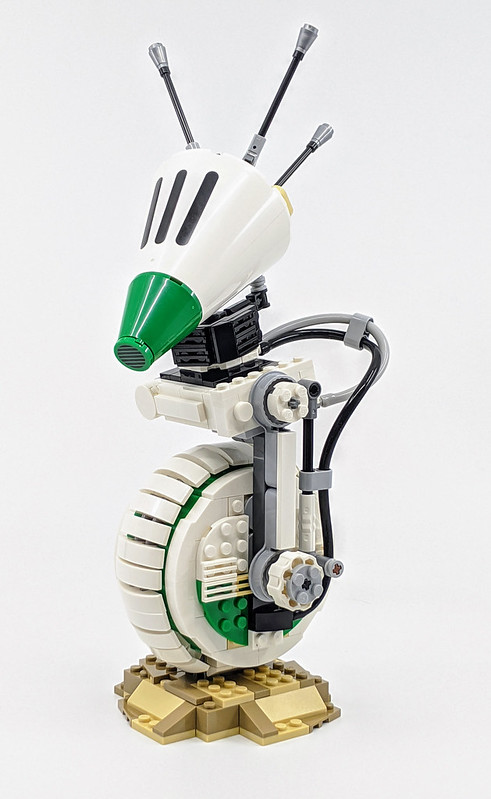 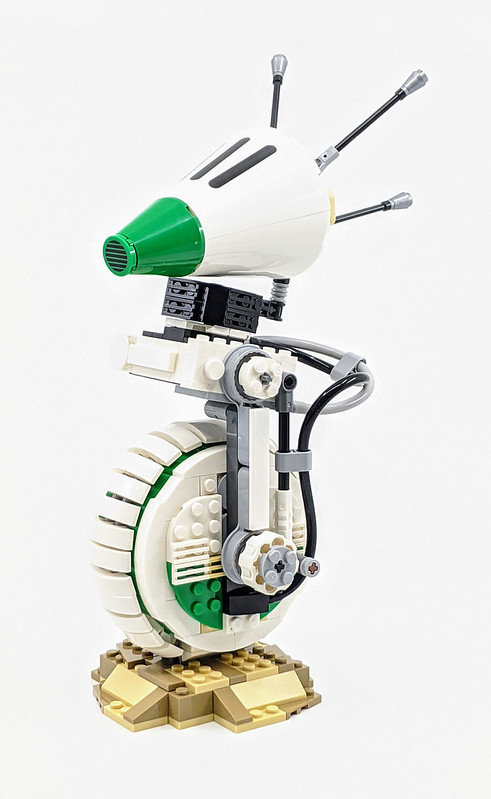 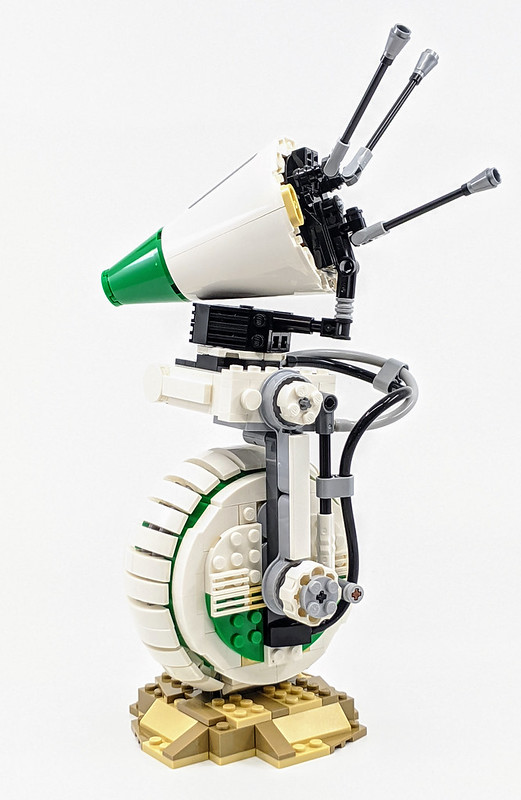 The head section is in basic terms, a cone. Which is achieved perfectly with a pair of 8x4x6 cone elements. One of these is printed with a trio of black strips. I’m so glad these are printed as a smallish sticker on such a prominent and large area, would really ruin the look of the Droid. The larger white cone pieces are tipped by a couple of smaller green ones and another printed piece, a 2×2 flat round tile. There are additional details added such as a trio of antenna on the head and a couple of rubber tubes run from the head onto uni-tread. 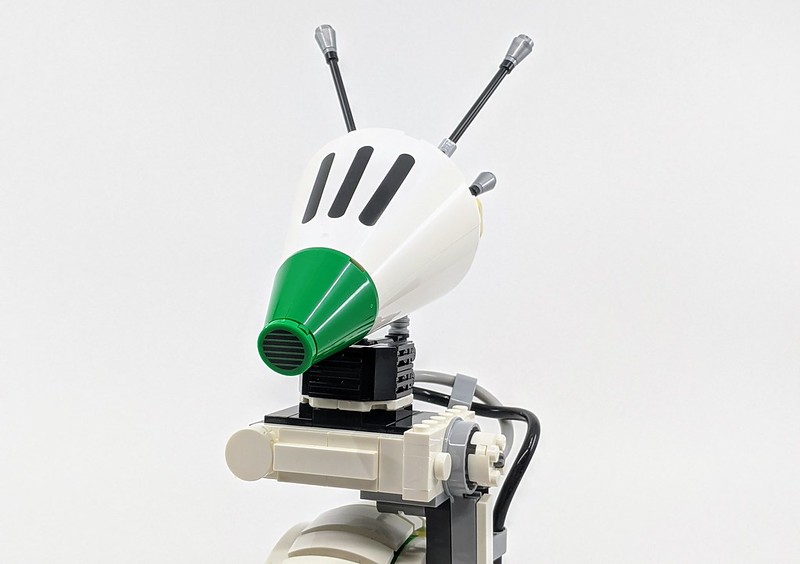 As with many of the display type LEGO Star Wars builds, the set includes a display plate. This features a sticker, detailing a few facts about the character and a Minifigure version of D-O. Until now this has only appeared in a couple of other LEGO Star Wars sets. 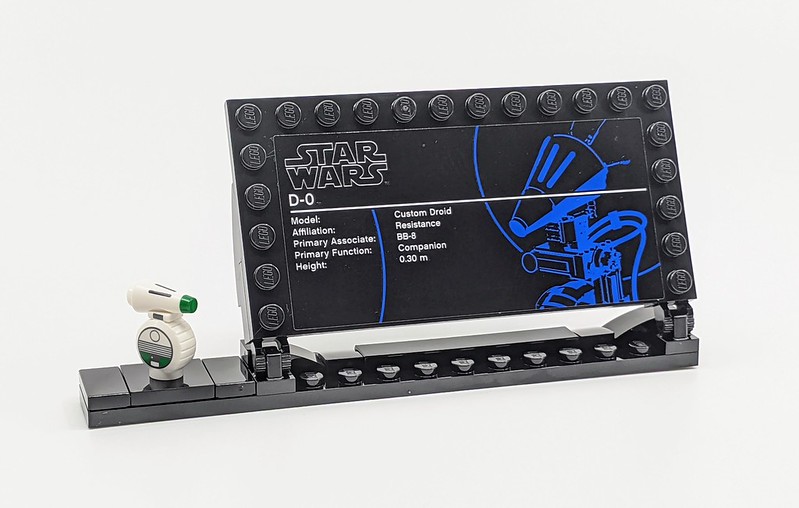 Although D-O didn’t have a huge role in The Rise of Skywalker, the Droid’s unique appearance and nervous voice made him memorable enough. That unique appearance certainly makes for decent LEGO set. The build is rather good and at first, I thought it would be quite simple and over in a flash However it took longer to construct than I thought. The uni-tread employs a very interesting technique and the use of parts perfectly matches the look of the Droid. Creating curved things with LEGO elements is never easy but just like the buildable BB-8 from a few years ago, it can be done and it can look great. It makes for a great display piece, which would look great alongside other LEGO Star Wars Droids. 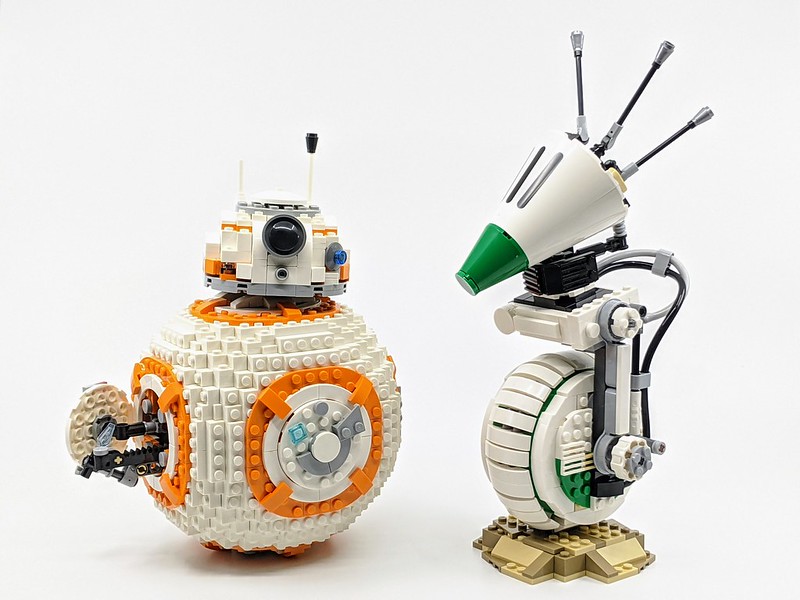