As the Elemental Master of Earth, Cole has had some pretty cool vehicles. His latest set of wheels is dubbed the Dragon Cruiser and it’s another of the new LEGO® NINJAGO Crystalized sets to include a Golden Dragon suited ninja. The upcoming series of the popular TV show has inspired all the sets in the new wave, which also features the return of some familiar villainous faces. How does the set compare to others and is it worth picking up? Here’s my review of Cole’s Dragon Cruiser. 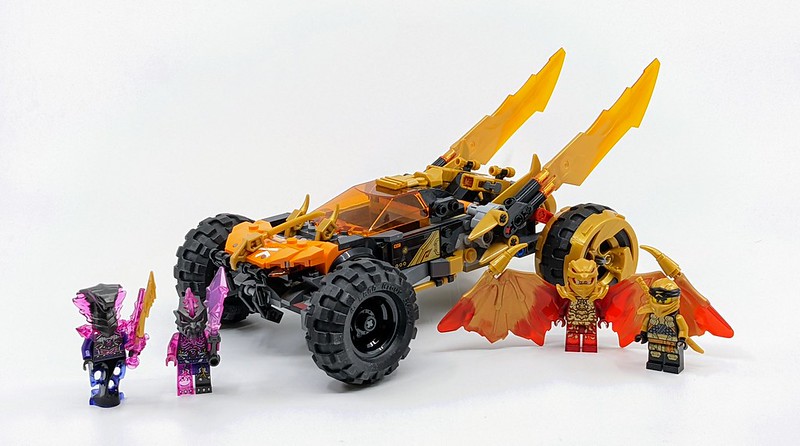 The perfect playset to fuel kids’ passion for ninja action
This NINJAGO vehicle building set includes 4 minifigures: Golden Dragon Kai, with his elemental weapon and a pair of golden dragon wings adorned with spikes; Golden Cole; the serpentine General Aspheera, armed with a crystal weapon; and Vengestone Brute with a sword.

Cool toys for little ninja
NINJAGO toys transport kids into a thrilling world of fantasy action where they can team up with Cole, Kai, Nya and all the ninja crew to face down a cast of dangerous villains and play out adventures with an extensive collection of playsets including mechs, cars, dragons and temples. 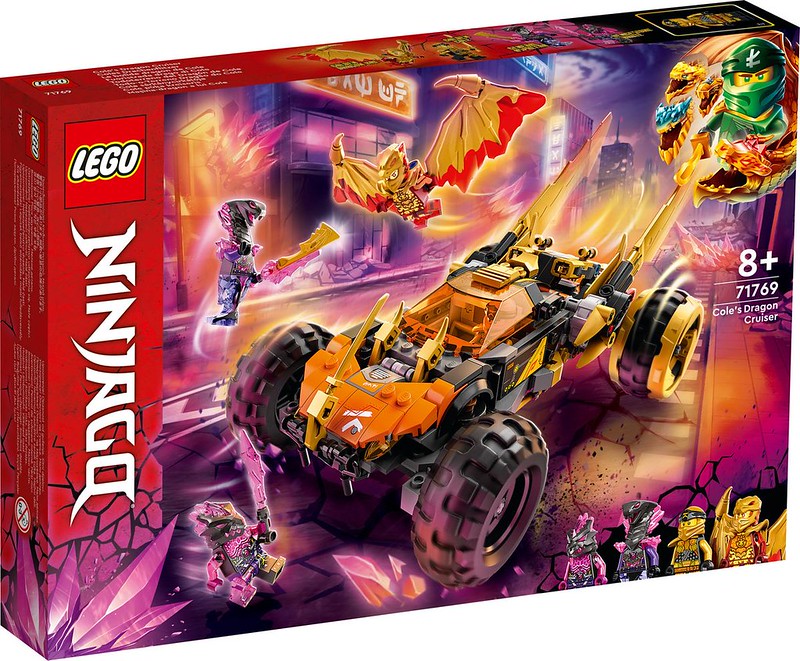 The set features the new ‘visually consistent’ instruction booklet, the new look for the instructions is part of the move towards sustainable packaging, although I can’t see how a dodgy product image helps with that. There’s also a small sheet of stickers. These add a few decal details to the set, mainly around the cockpit area. 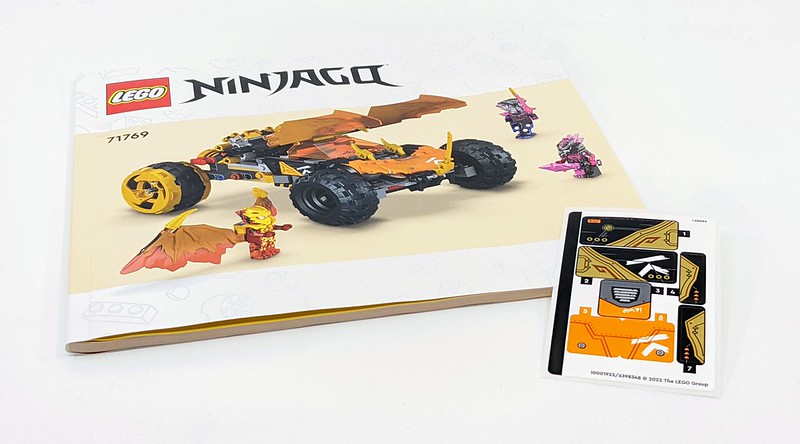 The main focus of the set is the car-like vehicle. Unlike the other sets to include a Golden Dragon suited ninja, this isn’t classed as a Golden Dragon vehicle. Despite that, it does have a couple of similar traits, such as golden trimmed wheels and large blade-like fins. The combination of the set’s choice of name and some of the features of the vehicle does result in annoyance more than anything else. Basically, it should be called Cole’s Golden Dragon Cruiser. Unfortunately, that’s not the only annoyance. Most of the other Golden Dragon sets also make use of a dragon-like bonnet plate. Not only do they look cool, but they also link nicely with the Golden Dragon ninja. What’s even more annoying is there is a perfect place for it on the set. Right at the front of the car is a small flip up the bonnet. This would have looked great as one of the dragon-style elements instead. 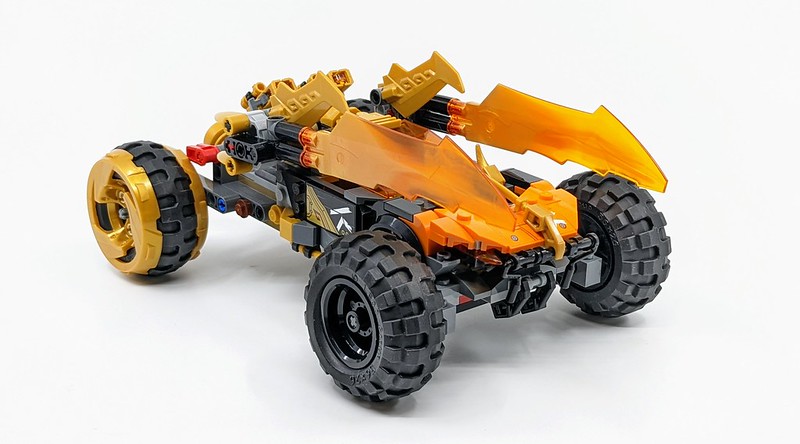 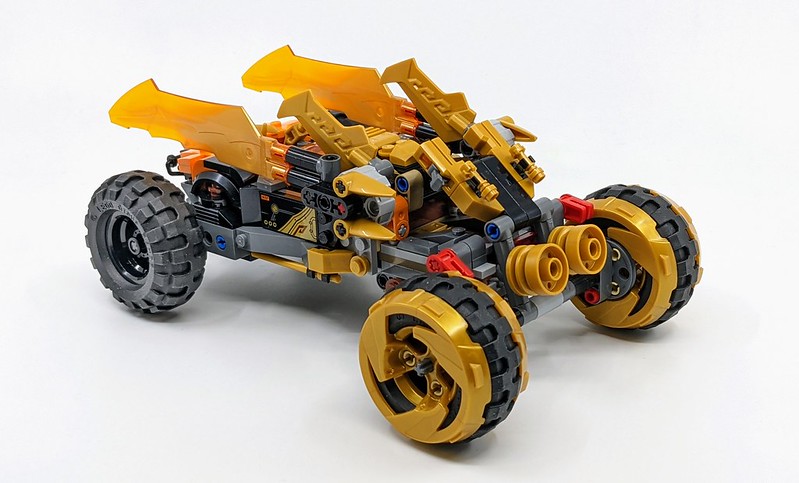 The car does have a unique play feature, the two large fins can be positioned to sit flush with the front of the car or swung back so they are flowing out the back of it. In doing so a pair of stud-shooting guns raise slightly. It’s a fun feature but not as swish as others, for example, Zane’s Jet. You can access the cockpit section of the car but requires completely removing the transparent orange canopy. As mentioned above you can so lift the bonnet section and in there is a hammer weapon. 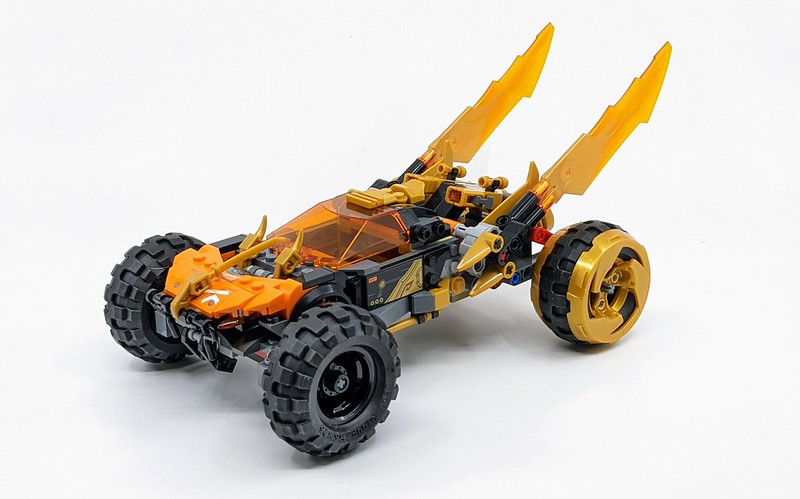 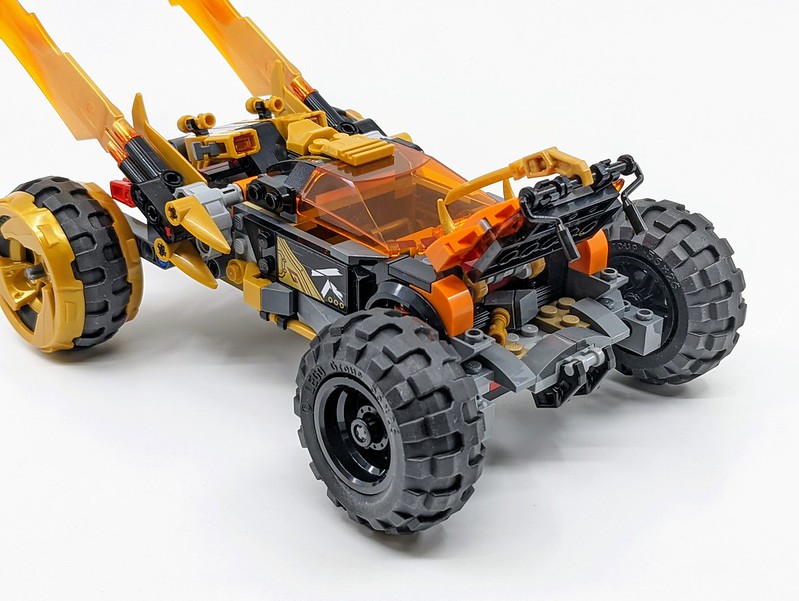 I’m not sure if I’d prefer both sets of wheels to have been capped with the golden rims or as they are presented in the set. It does look a little odd with the front one being just the tyre, however, if you look at the vehicle most of the golden elements are just located towards the rear of the build. 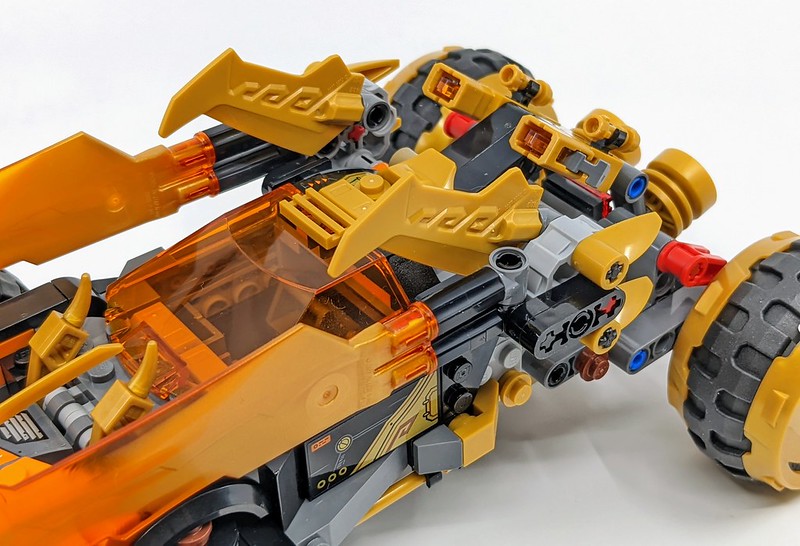 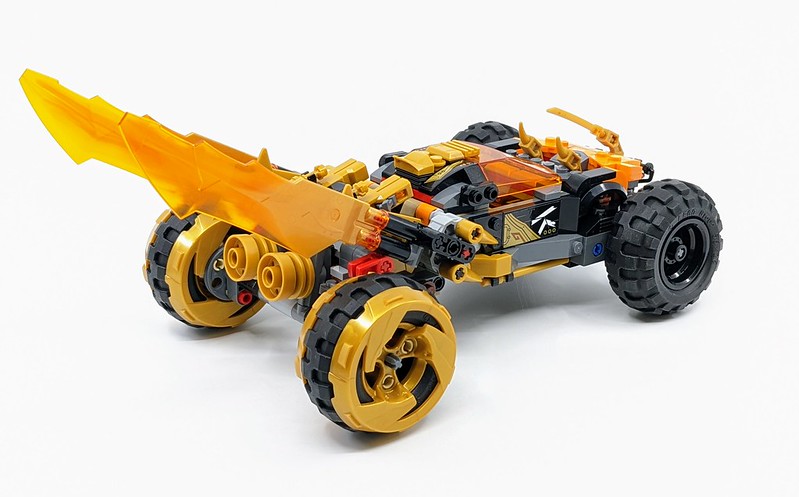 The set includes four characters – two ninja and a pair of villains. The ninja includes Cole in his golden robes. These are similar to standard robes but it features a greater amount of gold trimming. Cole seems to have the best gold robes as the print design, particularly on the torso, is very detailed. He’s joined Kai in the new Golden Dragon form. This is a complete departure from the usual ninja get-up. The Golden Dragon suits feature a unique dragon-like hood and a pair of large wings. Both of these are unique to the character as they are coloured to match that of their wearer. So Kai’s hood has transparent red against the golden of the dragon and so do the wings but as mentioned in other reviews, the wings look nothing like they do on the box. Despite that the actual minifigure is great, mostly using transparent pieces and bold print detail. 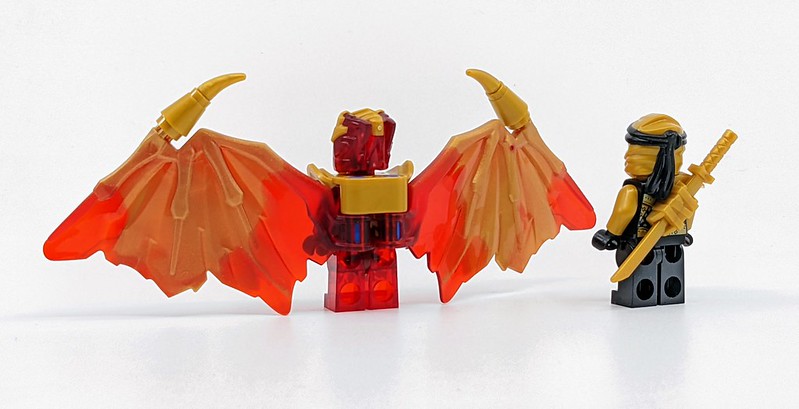 Aspheera is another returning foe and was previously featured as the leader of the Pyro Vipers and first featured in a set in 2019. In this set she’s had a little Crystalized makeover, so instead of the firey flames bordering her head, these are now transparent pink used on all of the bad guys in these new sets. Same goes for her ghostly tail used in place of legs. Her body is a generic one used on most of the Vengestone affiliates. The main difference is the swapping of her snake trimmed armour for some crystal ones. Finally, a Vengestone Brute is included in the set. These generic henchmen all use the exact same unique headpiece and the only thing to note their ranking is the slight difference to the print detailing. I do like the blend of transparent sections on the body and legs. 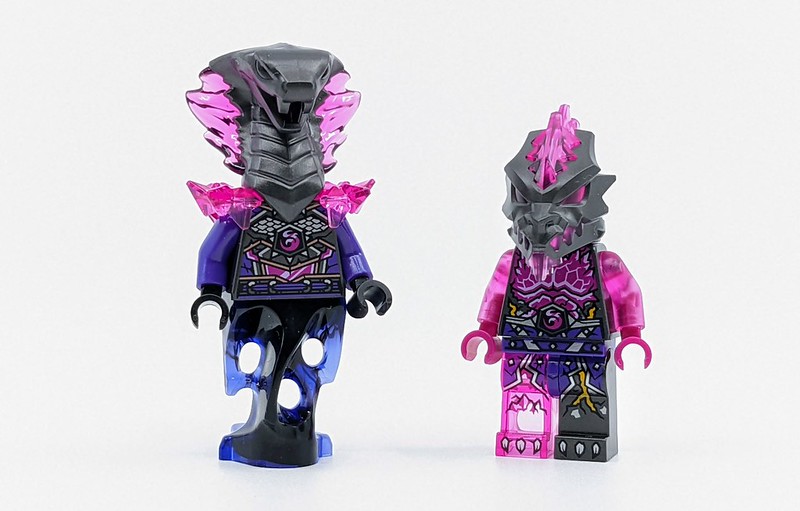 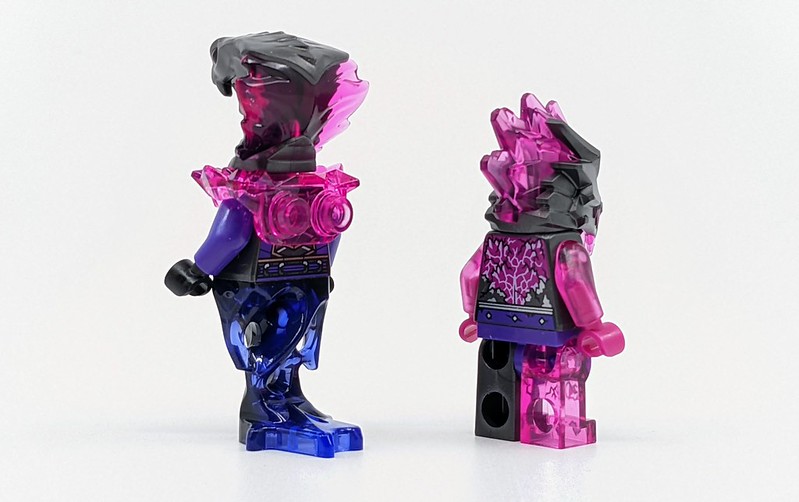 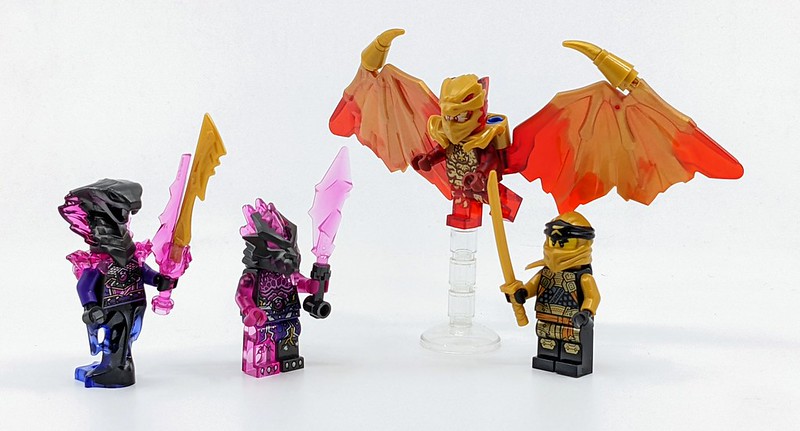 Cole’s past vehicles have been quite unique but this one doesn’t seem as exciting to be honest. The functional aspect of it is also less impressive compared to some of the other sets in this wave. But its chunky wheels and solid build mean it has plenty of playability. The line-up of minifigures is nice, Cole’s Golden Ninja outfit is certainly the best of all characters and the Golden Dragon minifigures continue to impress, even if those wings are exactly as cool as they appear on the packaging.