As big gaming fans here at BricksFanz HQ, I was delighted when I heard that the new range of LEGO® NINJAGO sets would have a gaming vibe to them. I was even more delighted when I actually saw the sets. The most interesting were the new collectible Arcade Pods, closer followed by the set I’m reviewing here, the Minifigure-filled Gamer’s Market. In the latest season of the NINJAGO TV show, many of the residents of NINJAGO City are transported into the digital realm of the Prime Empire game. Many of them become Avatars, which is a key focus of this interesting new set, that includes an impressive 9 Minifigures! But is the set just a glorified Minifigure pack or a worthy additional to the NINJAGO range? It’s time to press start on my review of the LEGO NINJAGO Gamer’s Market. 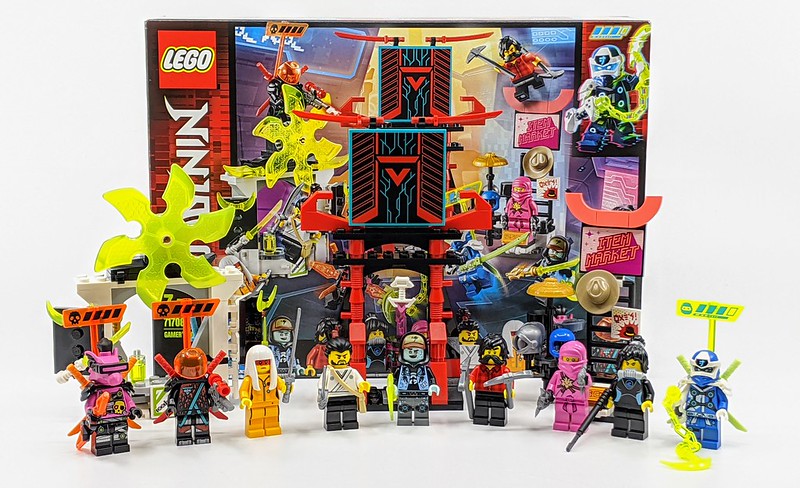 This is a brilliant LEGO® NINJAGO® ninja market featuring 9 LEGO minifigures including NINJAGO Digi Jay and Avatar Nya, and a host of other mini-ninjas and villains. With these ninja collectibles and plenty of cool accessories, NINJAGO fans can freely express themselves and recreate scenes from the Gamer’s Market in Prime Empire. An exciting new way to build your toy playset with ninja collectibles Instructions PLUS offers an interactive guide to constructing this toy playset featuring minininjas. Available on the free LEGO Life app, it has zoom and rotate viewing tools to help children piece together their LEGO bricks. The perfect buildable toys LEGO NINJAGO building sets make the perfect gift for kids by letting them enter a mystical world of adventure to team up with their ninja heroes against the forces of evil. NINJAGO® fans will be endlessly entertained as they role-play with action toys including gaming figures, buildable toys, cars, dragons and more. 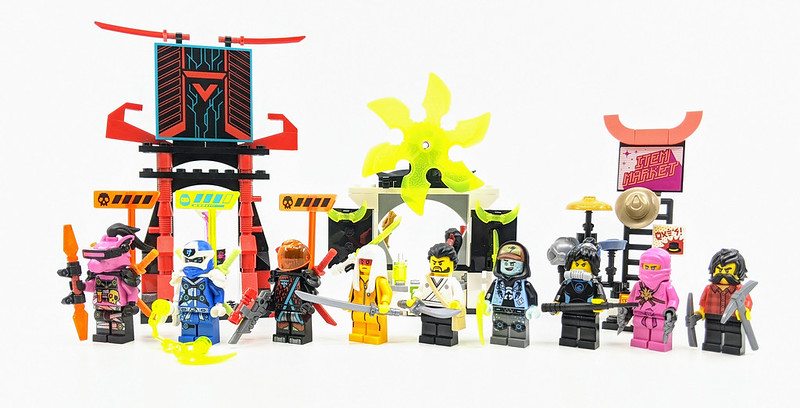 Although the main focus of the set is the 9 Minifigures, the set includes a trio of builds which are found within the realm of the game. The first of which is the Key-tana stall. A throne like alter on which the legendary Key-tana sword is housed. The styling of the stall seems to match that of the in-game bad guys, Unagami’s Army. So it’s mainly black and red in colour, with a bright bluish green 6×6 flat tile, which is used to showcase a huge sticker. It could have been printed but I think a sticker actually works better against the colour of the element. I like the use of elements in this little build, I commented on Twitter a few weeks ago about how I like the use of a retro element in the new ISS set. The same can be said here with four red megaphones used in the columns of the stall. The Key-tana is mounted within a 2×2 trans red round brick, the actual weapon element is dual-moulded a new for 2020. 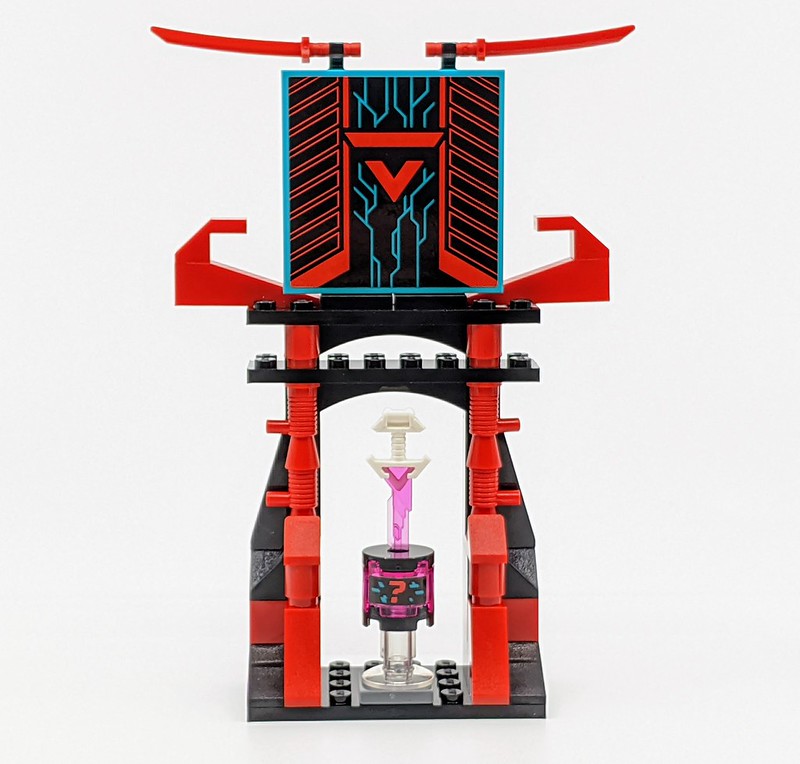 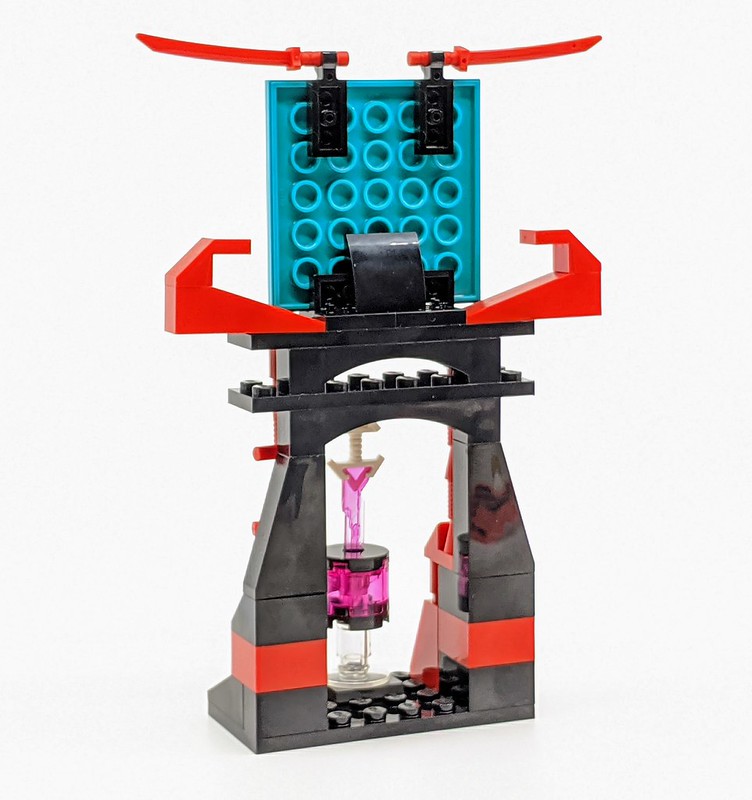 The second part of the set you build is Okino’s Weapon Stall. This is a completely different style to the Key-tana throne. The white, black and transparent green elements work really well together and give it a modern sci-fi feel. The new NINJAGO sets include a bag of transparent fluorescent green weapon extensions. Many of this are used to dress the Weapon Stall, which is topped by a huge trans green blade. It looks like a shuriken, it gives the stall a unique look and has a nice spinning action. A couple of Minifigure display plates are used to display some of the weapons on offer. There are also a couple of holders around the back which are used to hold a selection of swords including a familiar dragon blade. As with the Key-tana Stall, another classic LEGO element can be found here. A pair of vehicle doors are used to add a little detail to the base of the stall. 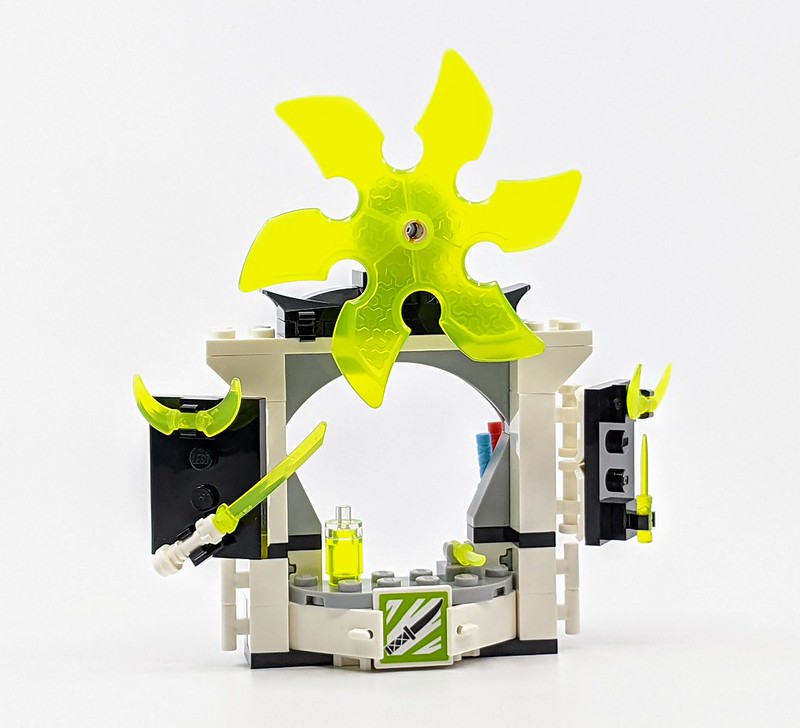 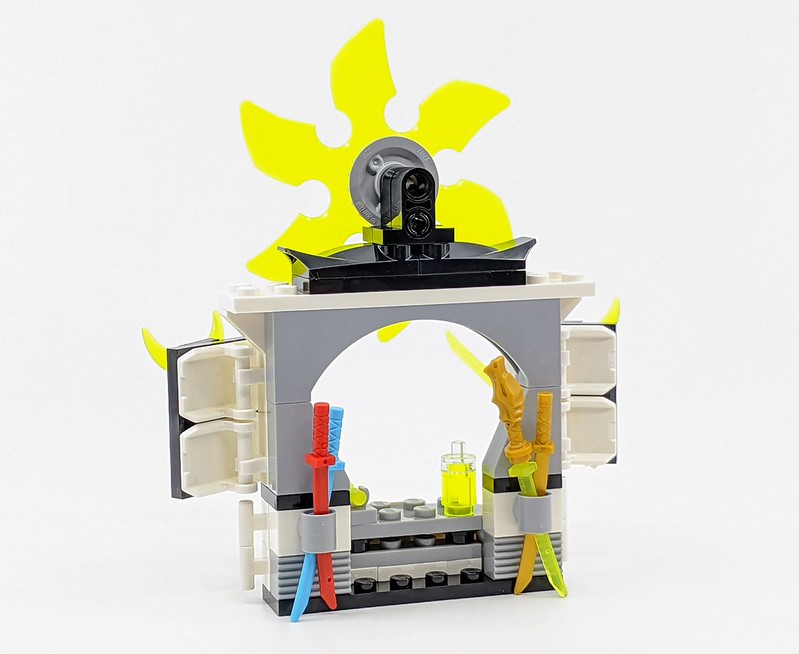 The final buildable element of the set is an awesome little Item Market. Changing your appearance is games is use as important as weapons, so this Item Market, allows you to change up your in-game characters appearance. The Item Market features a number of different pieces of headgear and an exclusive Avatar, but more on that later. The actual base of the stall is largely made up of bars elements, with a sign on top of it, featuring a sticker and a coral flat tile crown. The selection of hats are fun and include an Adventurer’s fedora, Knight’s helmet, Top Hat, Sailor’s Cap, a Bamboo Hat and a Classic Space blue helmet. I love how this are all displayed, There is also a gap right in the middle of the stall, which is where a very special Minifigure can be placed….. 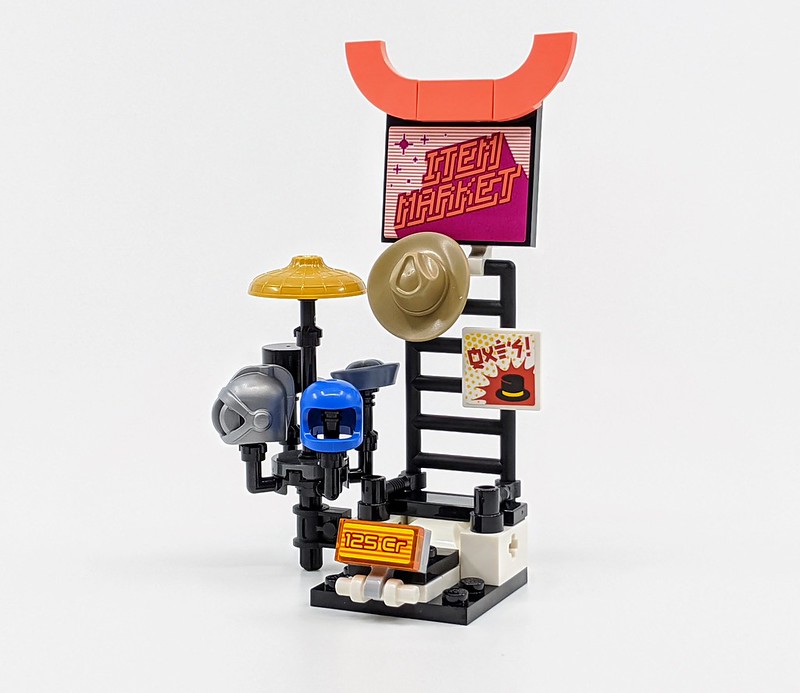 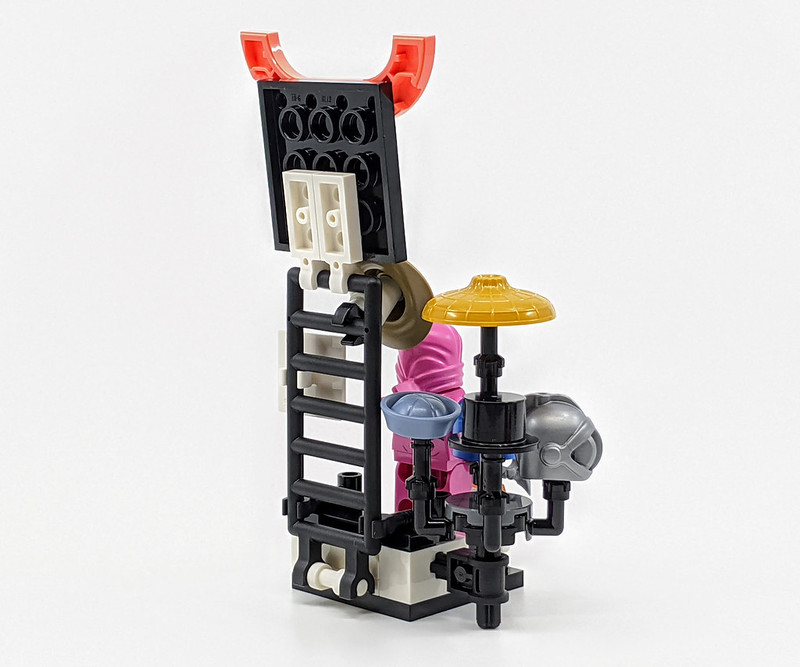 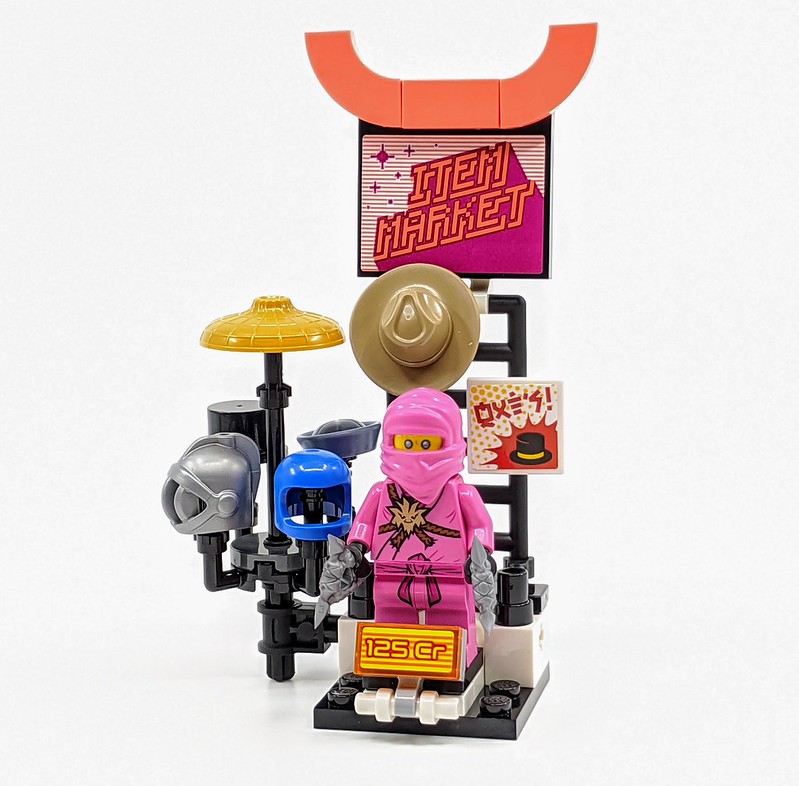 For many the biggest draw of the Gamer’s Market set will be the impressive line-up of Minifigures. The set features nine characters, most of which are exclusive to the set. The first three Minifigures are the in-game Avatar version of three of the main characters. So Cole has chosen to become some sort of Lumberjack which is similar to his previous alter ego of Rocky Dangerbuff, with a pair of axes and a mustache. He retains his normal face and post NINJAGO Movie hair. Nya’s Avatar is a little more plain but ties into her elemental power of water, so she is basically in scuba gear, complete with harpoon weapon and her normal head and hair. The most exciting addition to the set is Avatar Zane, which makes reference to his pink outfit from one of the earlier seasons of the show. This is styled after the original ninja costumes, with the older hood piece used for the character. This is purely a fan service inclusion but it’s still an incredible Minifigure. 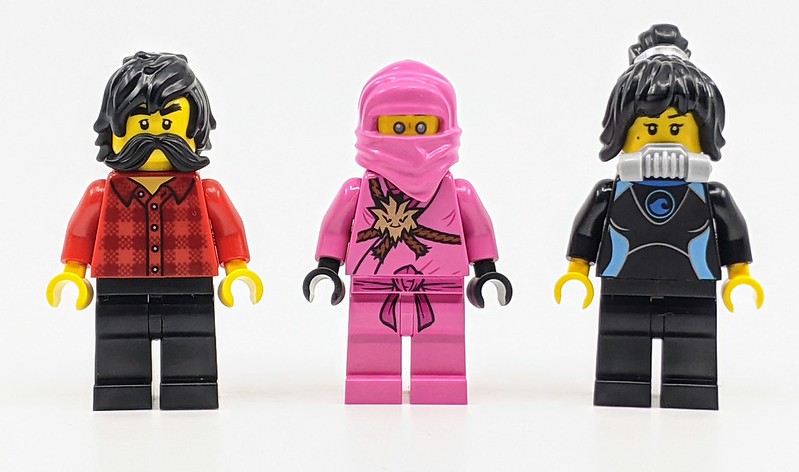 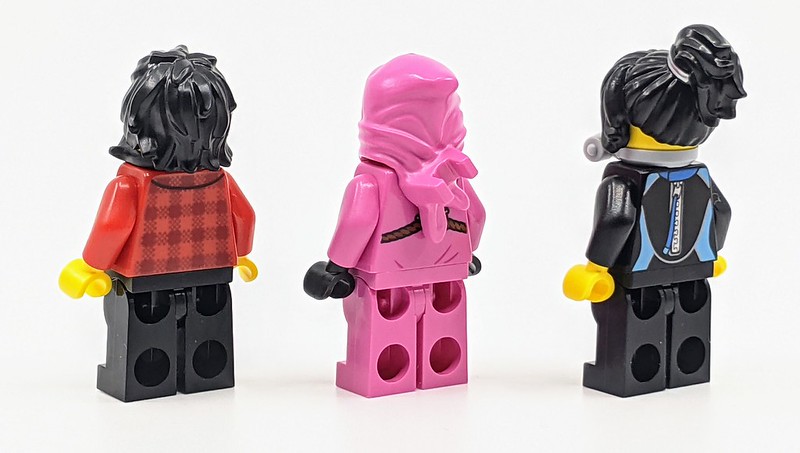 The next three Minifigures are based on peripheral characters. Harumi is back as an Avatar, which looks almost exactly the same as she appeared in the Sons of Garmadon season. So her hair and face is the same but she’s sporting a Kill Bill-type yellow outfit. She is joined by new faces, Scott and Weapon Stall owner Okino. Scott has a similar appearance to Jack from the Hidden Side theme, he features the same hooded hat element in a new colour. Scott has one of the best torsos in the set, thanks to the dragon details on his jacket. His blue skinned head is similar to Jay’s Avatar from Arcade Pods. Which is a trait of in-game Avatars, sometimes people have similar looking characters. Finally there is the weaponsmith Okino, who has the appearance of a samurai master. I like his new hairpiece and simple white robed torso. 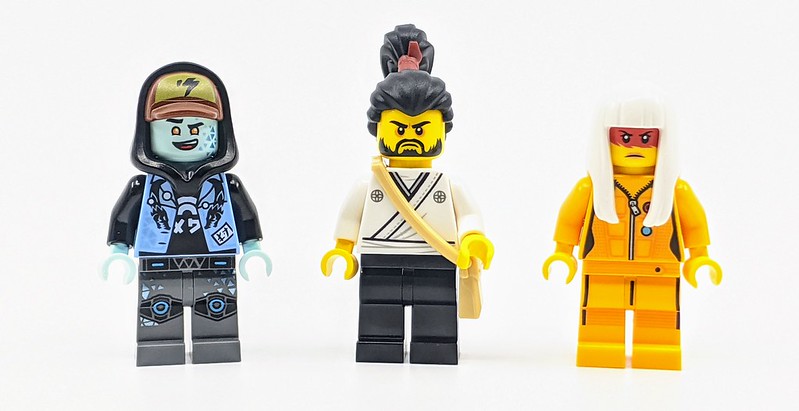 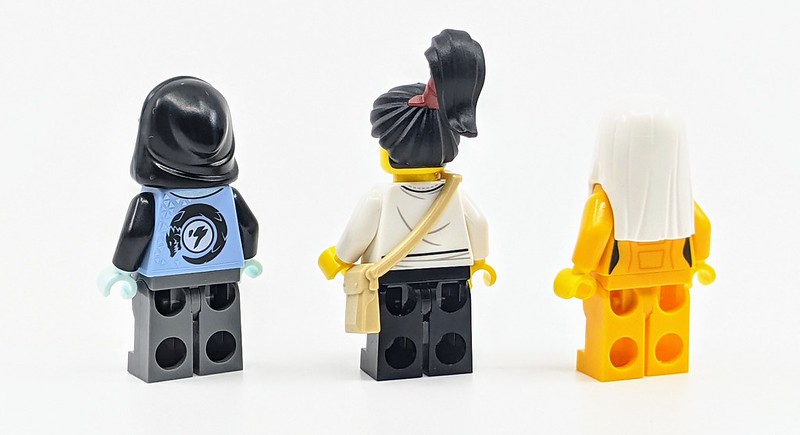 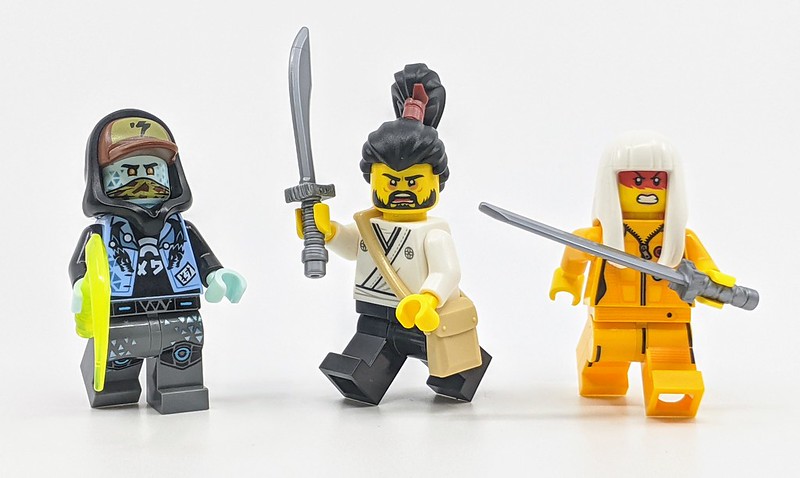 The final three Minifigures are all in-game characters. Jay is featured in his Digi form, so unlike other Avatars, his Digi appearance is more akin to his standard ninja outfit. His armour is made from a new shoulder element, which is more angular and has room to fit a health bar, made from a transparent rod and printed bar piece. The other two characters are clearly bad guys. One is Red Visor a foot soldier from Unagami’s Army. This faceless goon is has some great printing on his torso and legs plus his visor completes the look. Also giving him a Tron like appearance. He is joined by the evilly named Richie, which has a unique head element, that kind of has an animal like appearance. It kind of reminds me of the mutant bad guys from the Teenage Mutant Hero Turtles TV show. Richie has a great torso, including a few pixel type symbols. He also has a great weapon, which uses a black version of the new gamepad hilt complete with a couple of digi blades from the NEXO KNIGHTS range. Both the bad guys have health bar elements, just in transparent orange. 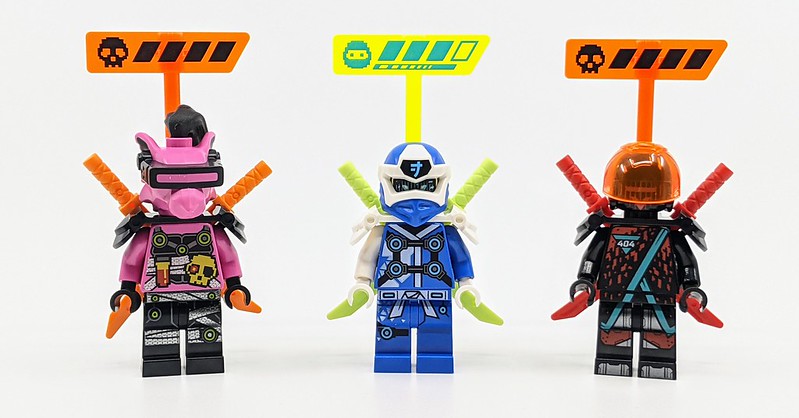 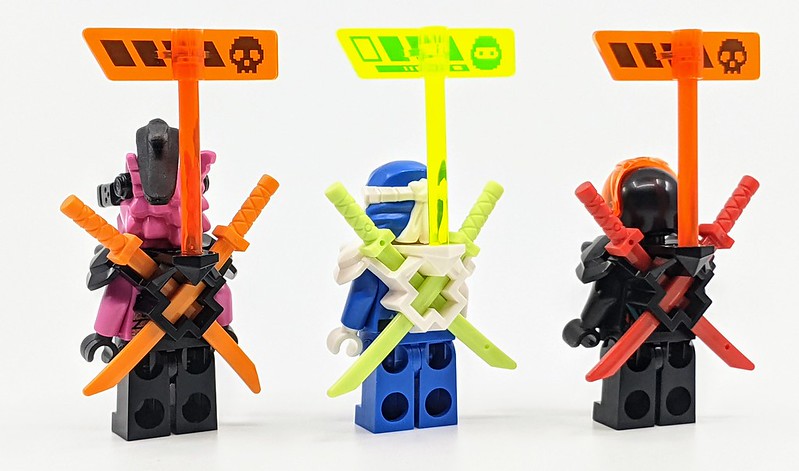 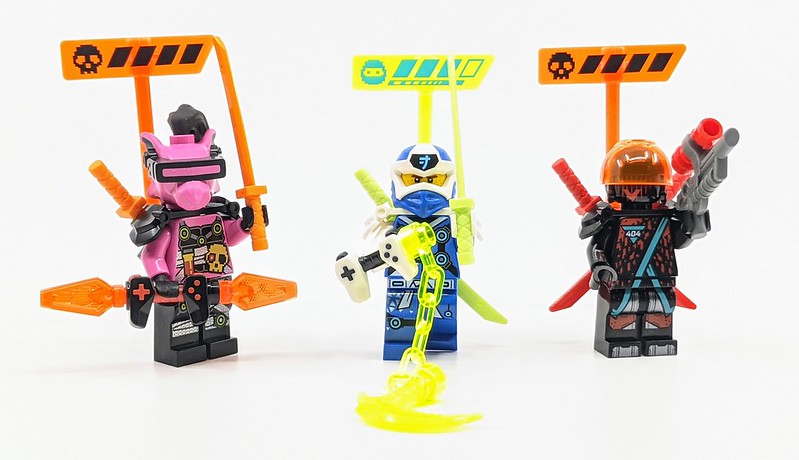 As Minifigures go the line-up here is pretty impressive, I really like the various Avatar characters, as they are as random as real video game Avatars are. They also have some nice looking accessories, the new Gamepad Hilts are great new pieces and the Key-tana look nice as well.

The NINJAGO set have always had some interesting Minifigures, as each new season is launched the characters are reinvented but still retain similar styles. But there has never been a set in the theme like the Gamer’s Market. In essence it’s basically a NINJAGO version of the People Packs from the LEGO City theme and that’s what makes it such a great little set. The addition builds could have been pointless bits of scenery, instead they add something to the overall set. The selection of Minifigures are rather awesome, I love that Zane’s pink coloured ninja outfit has finally become an actual Minifigure, much to the delight of NINJAGO fans. The whole set is incredibly great value for money and I hope this is the first of many more ‘People Pack’ type sets to be released beyond the LEGO City theme. 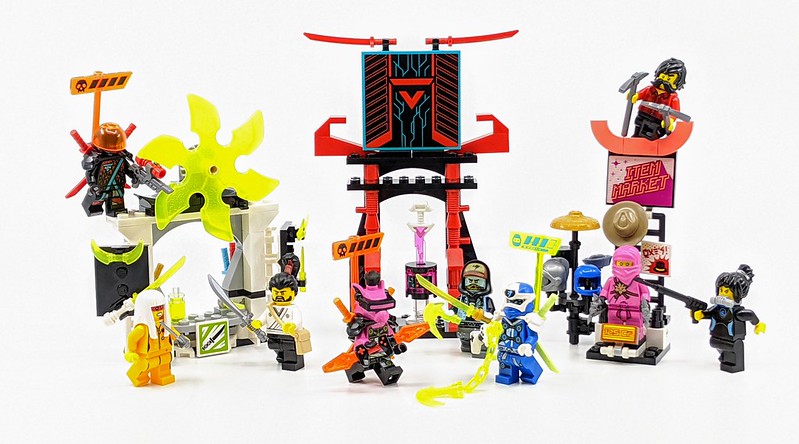