The LEGO® Movie 2 made not have had the same impact at the boxoffice as the original, but it has been the source of some decent LEGO sets and Minifigures. It’s safe to say their have left the best until last. This Summer a trio of new The LEGO Movie 2 sets are set to be released. One of those sets is the awesomely named Systar Party Crew and is based a fleeting moment towards the end of the movie. This is when most of the characters have blasted off to the Systar System, a glitter-filled realm bursting with colour and wonderful thoughts. I’ve managed to track down the set ahead of it’s official released on August first, so they get our review on. 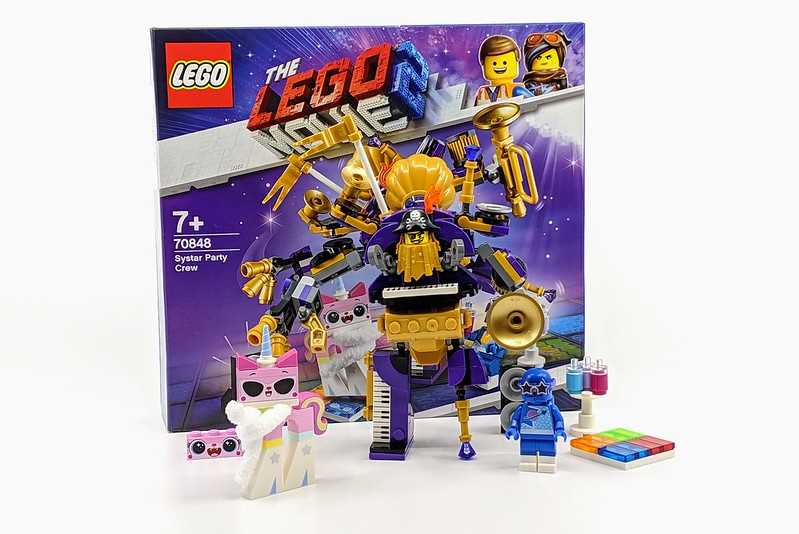 Kids can create an out-of-this-world party with 70848 Systar Party Crew! This fun-packed THE LEGO® MOVIE 2™ set features the highly posable One-Man-Metal-Band toy mech, with a built-in MetalBeard minifigure head, gripping hand and lots of built-in musical instrument details. Fans of the movie will love dressing up THE LEGO MOVIE 2 character Stardust Benny with new-for-August-2019 star glasses and the Unikitty as Disco Kitty brick-built figure with a fluffy fabric feather boa. The set also includes a buildable multicolored dancefloor, loudspeaker and table topped with brick-built smoothie drinks to inspire kids to recreate movie scenes and make up their own stories. 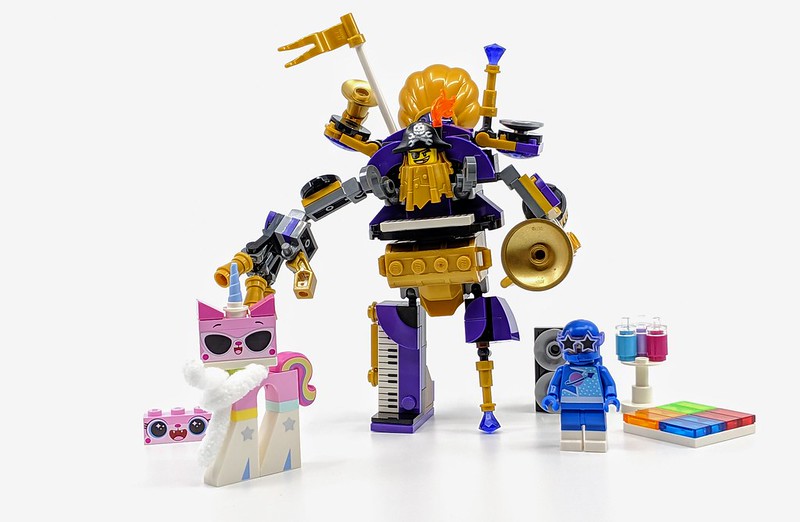 Much of the build is focused around the new version of MetalBeard, who has been transformed into the musical One-Man-Metal-Band. Part pirate, part ship and part musical instrument, the new MetalBeard is much more colourful than other versions. Gone is the brown tones of past MetalBeards, replaced with purples, yellows and golds. His basic form is similar to other versions, but instead of ship parts, he’s made up of musical elements. These include a trumpet arm and a keyboard leg. The keyboard keys are a printed element and you get two of them. 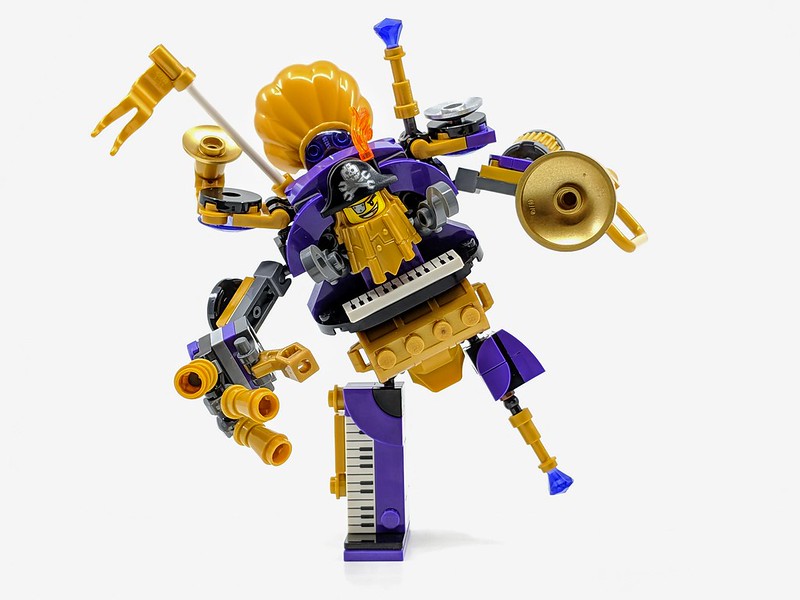 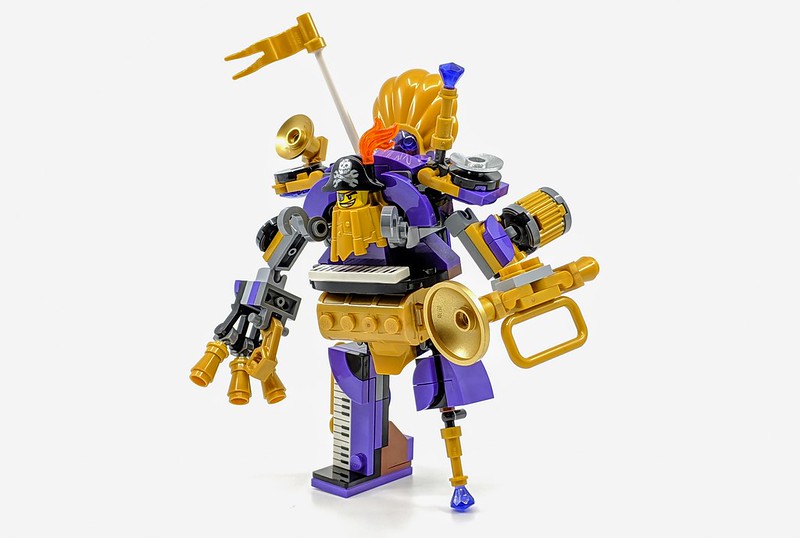 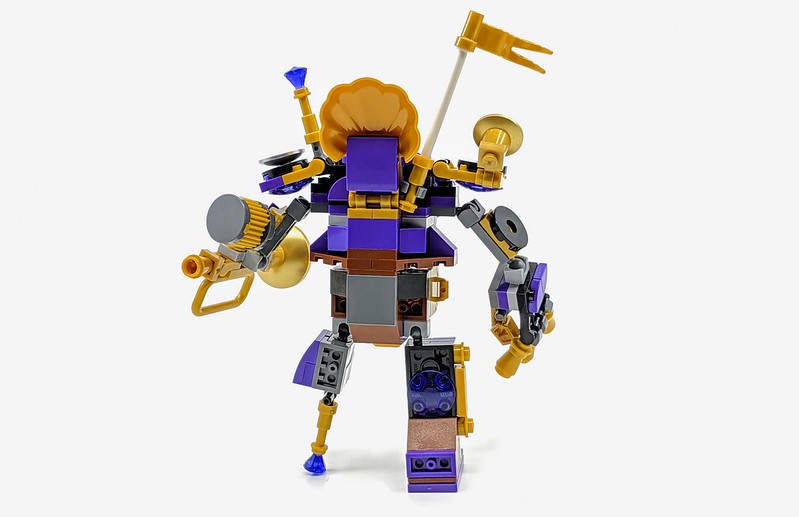 Other elements used for all versions of MetalBeard have been recoloured to fit his new style. So his treasure chest is gold, as is his unique beard element. MetalBeard is such a unique looking character, but this version is certainly his coolest variant. I love the colour scheme used and how the musical elements have been incorporated into the build. 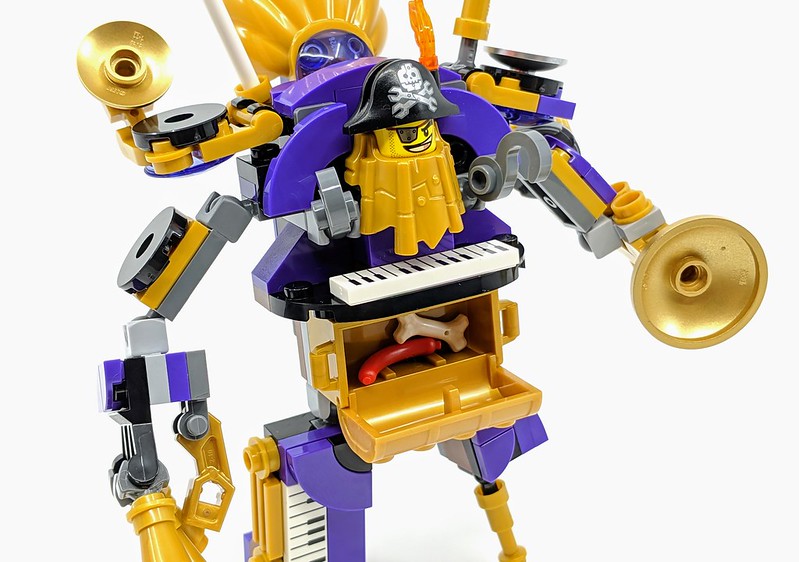 As well as the characters, there are three very small pieces of sceney. These are simple builds to represent a speaker, a table of sugary juice drinks and a colourful dance mat. They are a nice addition to the overall set but nothing substantial in terms of building. 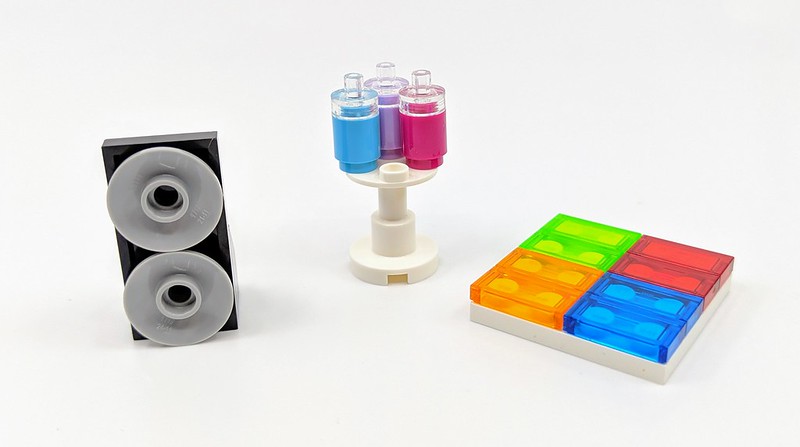 Finally there is a partly new version of Unikitty known here as Disco Kitty. She is similar to the version in the Pop-Up Party Bus, but has an additional face on a 3×1 printed brick and a glamorous fluffy fabric feather boa, a brand new material piece. Although it’s basically the same version of a previous Unikitty, it’s nice to be able to get it from a much cheaper set. 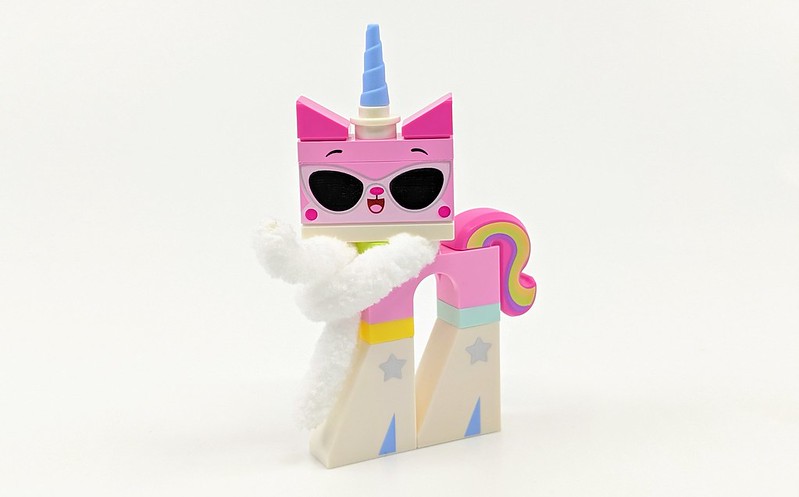 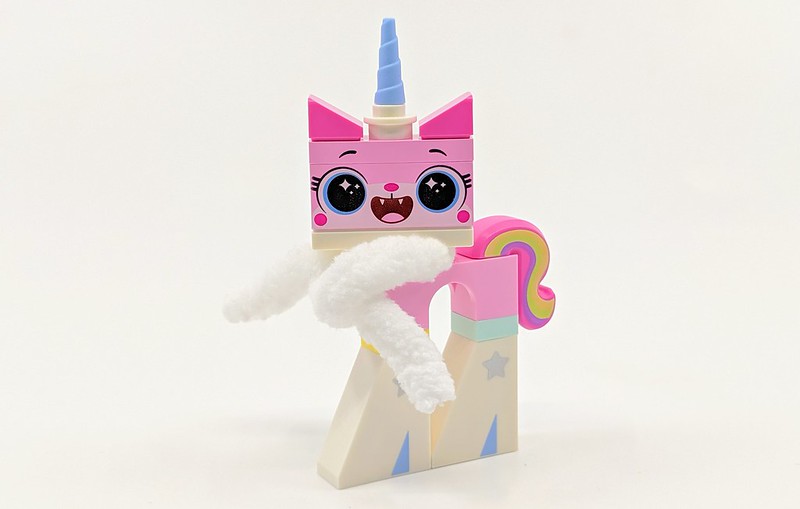 There is only one Minifigure included in the set but it’s a doozy. Even since this version of Benny was revealed at the LEGO House exhibition for The LEGO Movie 2, people were keen to add him to their collection. Although we’ve had to wait for it him, it’s safe to say it has been worth it. Benny is still kitted out in his Classic Space outfit, complete with broken chin strap, but it’s been given a disco makeover. The Classic Space logo is now pink and purple and Benny is now wearing white boots, achieved with the dual-molded legs. 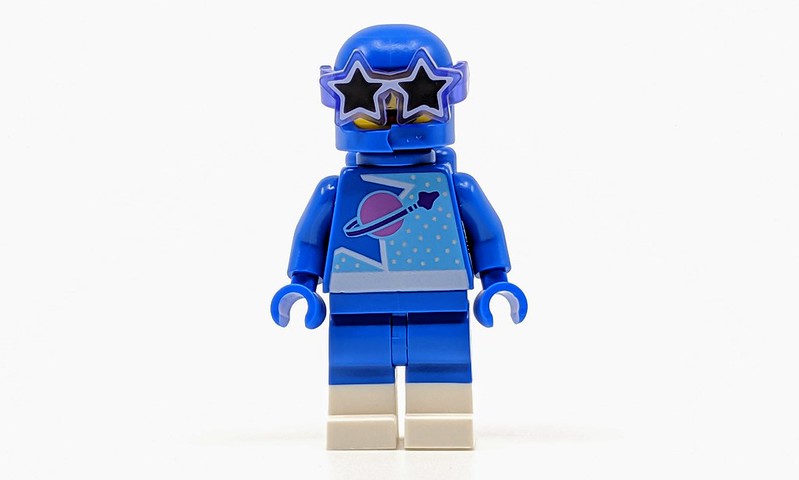 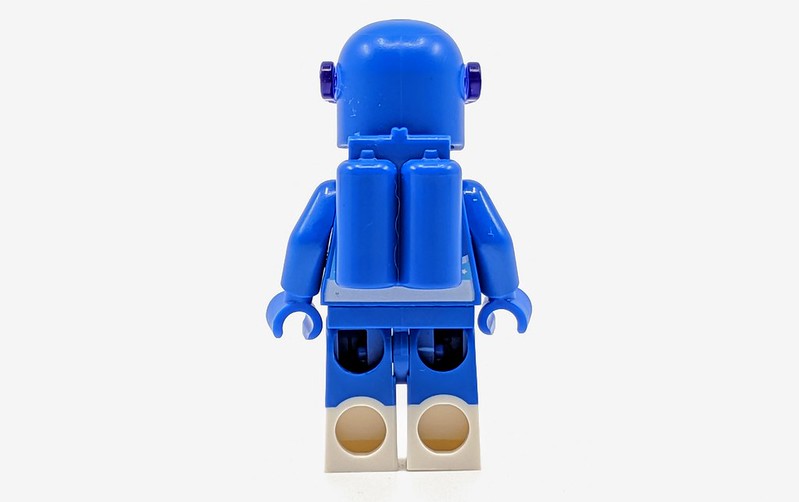 One of the best additions to Benny is his funky star specs. These are a new element and connect to the helmet in a similar fashion to a visor element. Benny has two faces, both new and both delightfully joyful, just what you would expect from the spaceship loving spaceman. 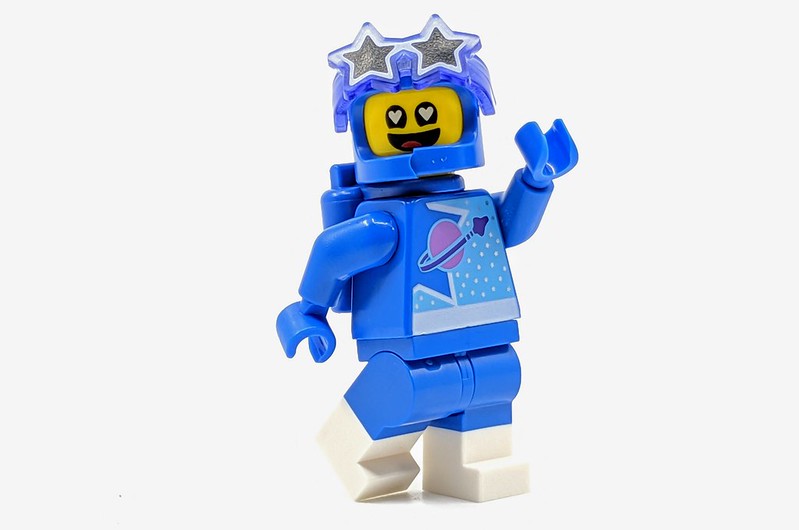 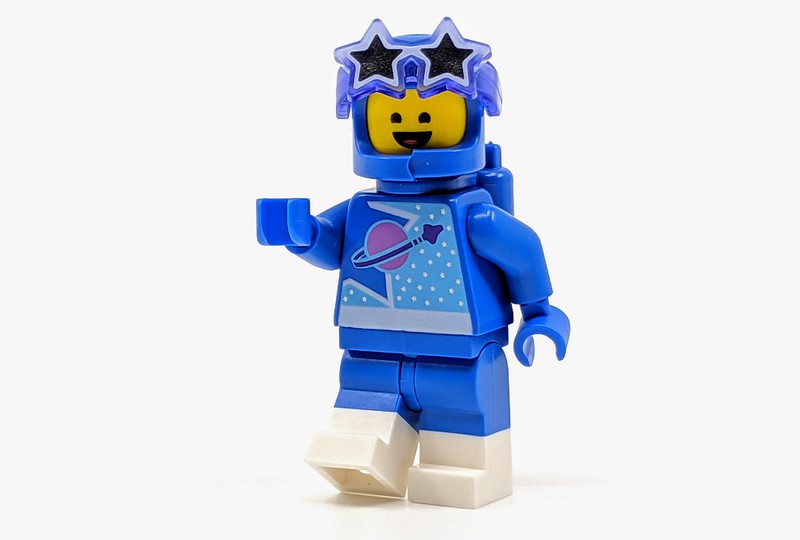 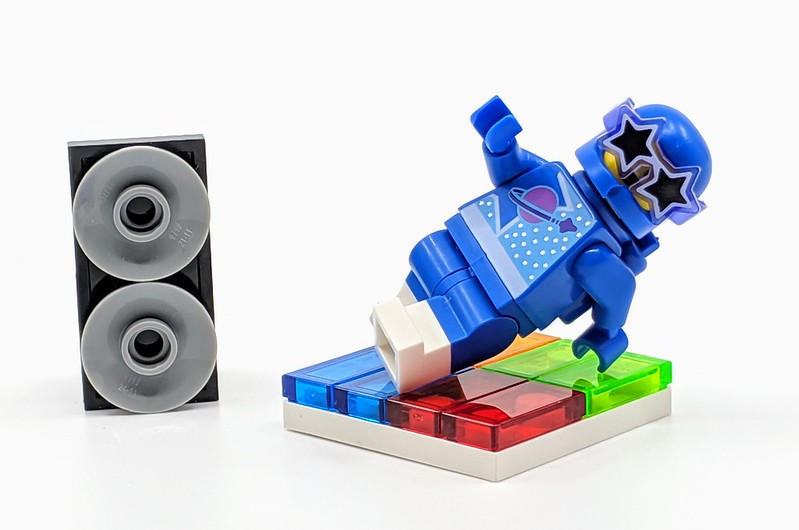 The Systar System is crazy place, which is nicely captured in this fun little set. I love the new colourful new version of MetalBeard, especially how the musical elements have been incorporated into his body. Disco Kitty is a fun versions but certainly not the best part of the set. That honour is bestowed upon delightful Stardust Benny. This kisch 80’s version of his spacesuit is a perfect match for the character and the Classic Space era. For those who like to collect variants of characters, this is a perfect set for that and also includes a nice spread of elements in usual colours. 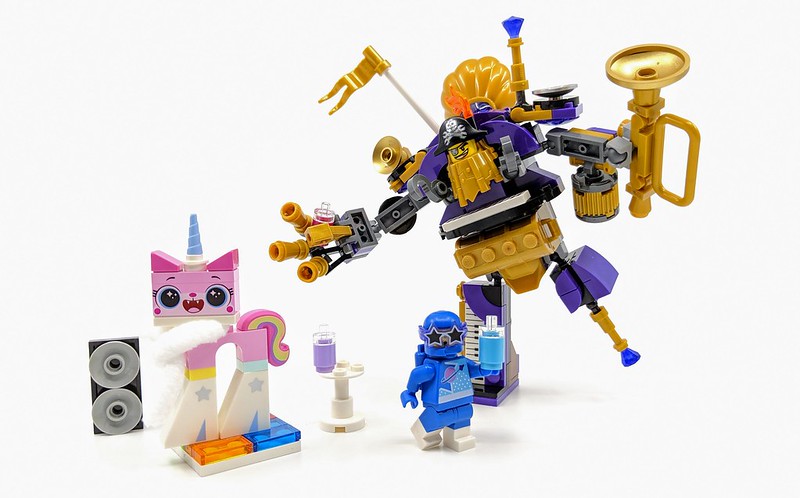 This set, along with others in the new wave of LEGO Movie 2 Summer sets will be available from August 1st. This set has purchased in a UK retail store, details of which can be provided upon request.