I’ve always been amazed at how a LEGO® set can have alternate builds, be they 2-in-1 or 3-in-1, using one set of elements to create numerous builds can’t be an easy feat. The essence of rebuilding is also a big theme for The LEGO Movie 2 and so a number of sets from the first wave of releases have the ability to be build in different ways using the same pieces. So I intrigued to see how Emmet’s Dream House faired in the old rebuilding stakes. In the movie Emmet is blissfully unaware of the bad things going on around him. He’s more concerned with spending his days holed up in a delightful little house on the outskirts of Apocalypseburg, with the love of his life Lucy and Unikitty for good measure. But after an attack from Sweet Mayhem, his dream and house is left in tatters, so he rebuilds it into a rocketship and blasts off into the Systar System. But how does that translate into the actual set, read on to find out.

Show you are a master rebuilder with THE LEGO® MOVIE 2™ 70831 Emmet’s Dream House/Rescue Rocket! This 2-in-1 construction toy features Emmet’s home which can be rebuilt into a rocket. The house toy opens out for easy interior play and has a detailed living room/kitchen and attic. Remove the roof and use parts from the water tower and barricade to create a rocket with spring-loaded shooters and adjustable engines. This fun building toy includes 3 minifigures, plus buildable Planty and Unikitty as Warrior Kitty figures with weapons and accessories to role-play action from THE LEGO MOVIE 2. 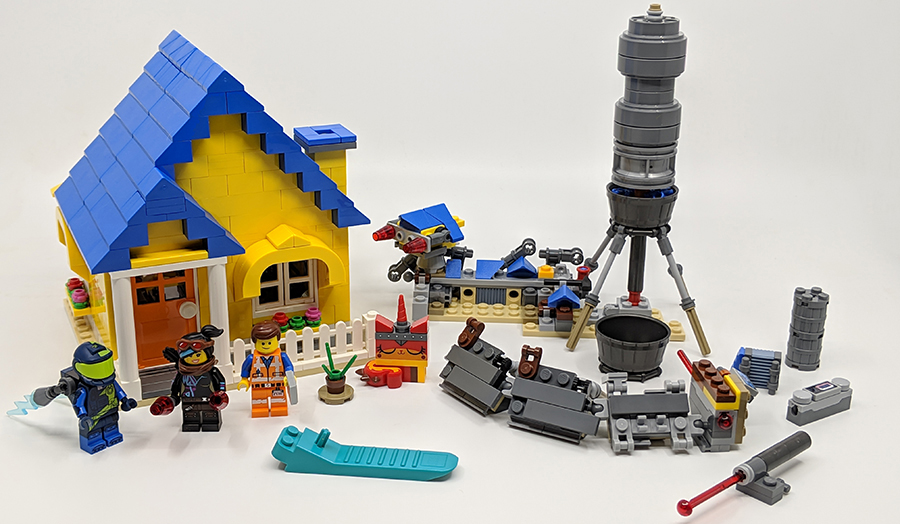 As mentioned above it must be hard enough to create a single LEGO set without the added hassle of taking those exact same elements to create a further one or two builds. But just like in the movie, Emmet’s quint little house can be rebuilt into a Systar System seeking spaceship. But unlike other sets in The LEGO Movie 2 range, which also offer alternate builds, the bagged elements are unnumbered. And so my annoyance with the set begins. I know there are those who like the old school challenge of  searching through a mass of bricks, but if you have a limited amount of space to build and the set has a lot of parts, numbered stages are a much warranted addition to the LEGO sets. Not to mention something with can be ignored should you wish to build in an old school manner. The first things you build are a seemingly random selection of things best described as well just that ‘things’. Firstly these ‘things’ do not appear in the movie and the only reason they are in the set are to be used in the alternate build. The ‘things’ are meant to represent a water tower, battlement and I have no ideas on the other bits, especially the one with a mini version of the Rocket Ship. These parts of the build really do feel like just random elements stuck together. I understand the need to have them built into build in some way, but they offer limited play features and would be better off being left over to be used when you tackle the other build. 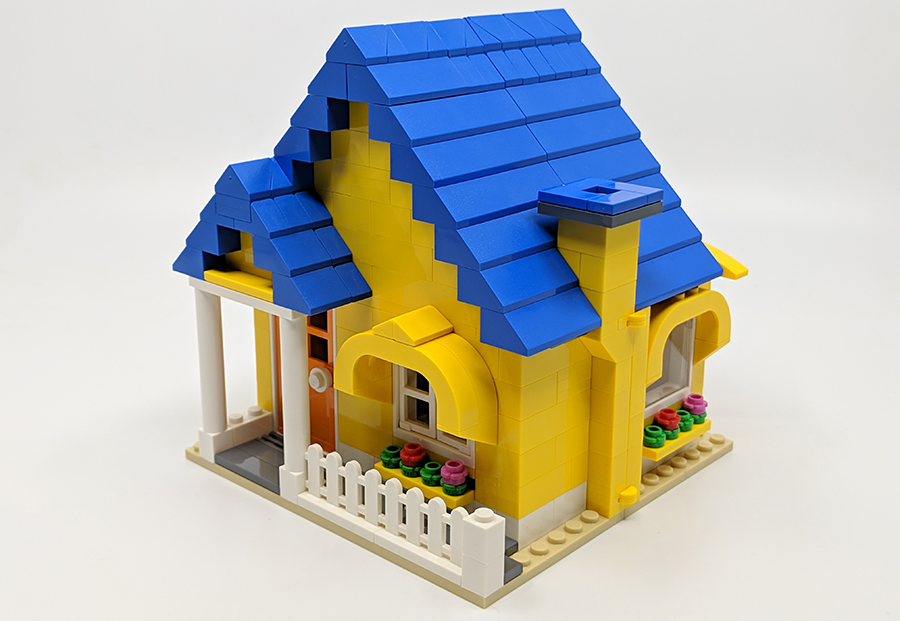 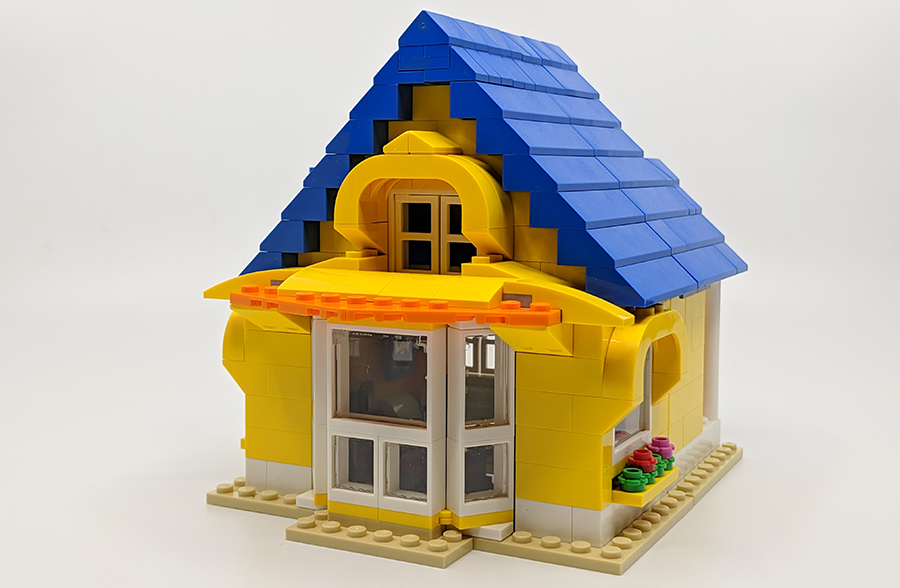 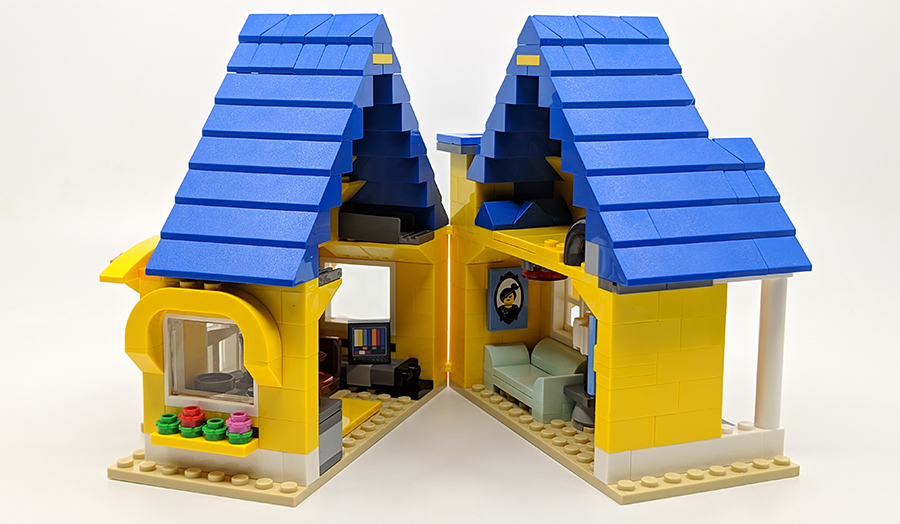 The house is a little more exciting than those weird pieces above. It has a nice retro feel to it and looks similar to some of the simple house sets from the 70s. It’s also hinged, so it can be closed to form a complete building or opened up to access the inside areas. One half features a cute little orange front door along with a picket fence and on the opposite side is a bay window. All surrounded by a unique and eye catching yellow and blue colour scheme. 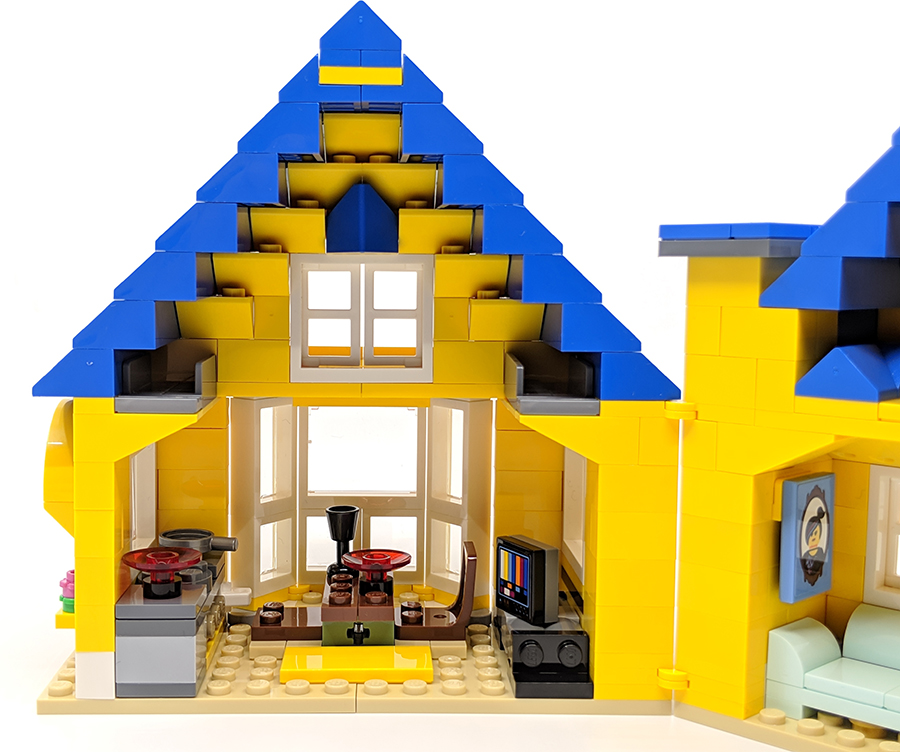 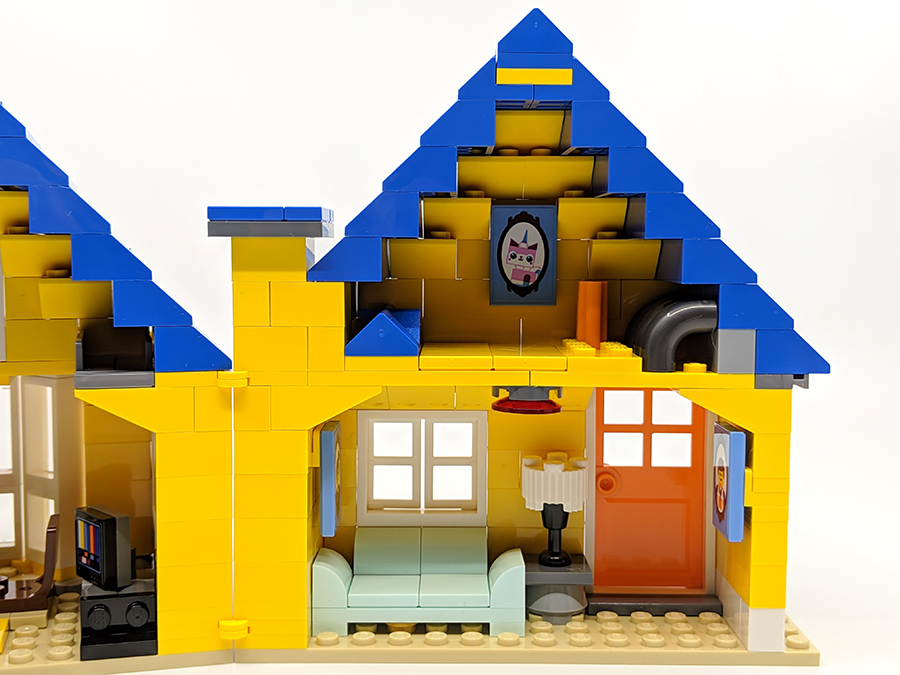 There are some nice details inside, including a living room, kitchen and a little loft room for Ultrakatty to rest between battles. It’s obviously smaller than the version in the movie but it’s a nice take on it. I do like the ‘family’ portraits of Emmet, Lucy and Unikitty, each achieved with stickers on 2×3 tiles. There are a few randomly placed elements dotted around the inside of the build but at least some effort has been made to hide them a little. The first build almost annoyed me enough, that I wasn’t going to attempt the alternate one. But if you’re going to review a set then, you have to do it right. I’m glad I did as the Rocket House build reeled back by thoughts on the set. This build is based on Emmet’s rebuilt house, which he uses to blast off to Systar System. Now this uses every element and to great effort. A rocket house may sound like an odd combination but it results in a unique build, which is surprisingly hefty. Unlike the house which splits open to access the insides. The roof can be removed instead. The bay windows become the rockets front window. The front door become a control panel and all those random pieces make up the engines and thruster rockets. I enjoyed this part of the build way more than the house. Which makes things even more annoying as the house on it’s own is a decent set, the Rocket is really fun, but both are let down by those random bit of tad.

The set contains three Minifigures and buildable Ultrakatty and yes once again it’s another set to contain both Emmet and Lucy are featured. Lucy who is kitted out in her battle-ready gear, with includes the new hairpiece with goggles and a neck scarf element which has a notch so it can be worn with a quiver piece. This version appears in three other sets plus one of The LEGO Movie 2 polybags. Emmet is a little more generic, his print detail is a little worn but apart from that he’s similar to all his other appearances.

The star of the show is the danger-loving Rex, who is an exclusive version in this set. When we first meet Rex Dangervest, he’s blasting through asteroids to aid Emmet. So instead of being kitted out in his vest, he’s wearing a spacesuit-type outfit. Rex also has his new hairpiece but also includes a cool Rex-branded helmet and a solid coloured visor. Rex also sports a funky little jetpack, made from a simple amount of elements, but includes a printed piece. Finally there’s the anger-filled Ultrakatty, this new take on Unikitty has her royal highness now permanently in angry mode. She can be built into two different forms, one is similar to her past appearances, with similar elements being used. The tail element now features spikes and an arrow has been added for good measure. In her other form, she’s a little more sleepy, with her body is built differently but uses the same pieces for the head.

I started out being annoyed by the set and then slightly angry by the totally unnecessary pieces built alongside the Dream House part of the built. These really do feel as if a handful of elements have been thrown together. I understand these parts are needed to create the Rocket Ship, but they could have been incorporated into the main build a little better or I’d rather they were simply left over. I reluctantly rebuilt the Dream House into the alternate built and my annoyance of the set has waned a little, but of all The LEGO Movie 2 sets I’ve built these is my least favourite. Take out the random stuff built with the house and it’s an fun little set, which has an air of some of the classic LEGO sets from the early days of LEGO. The rocket version is also a fun set, and whilst alternate builds are appreciated, I think this set would of been better without it. Rex Dangervest and Ultrakatty are great characters but it would of been nice if Emmet and Lucy were a little more unique. If nothing else it’s a great set for parts and maybe worth picking up if you see it reduced.