When the first snippet of information about The LEGO® Movie 2 was released last year, it showed a brand new character, who would later be known as Sweet Mayhem. Not only was she a new character, she was also a Mini-doll and her ship was one of the first few sets to be revealed. This interesting looking craft was also featured in first few trailers for the movie, making it a key part of the story. It’s also the latest set in our series of The LEGO Movie 2 set reviews. 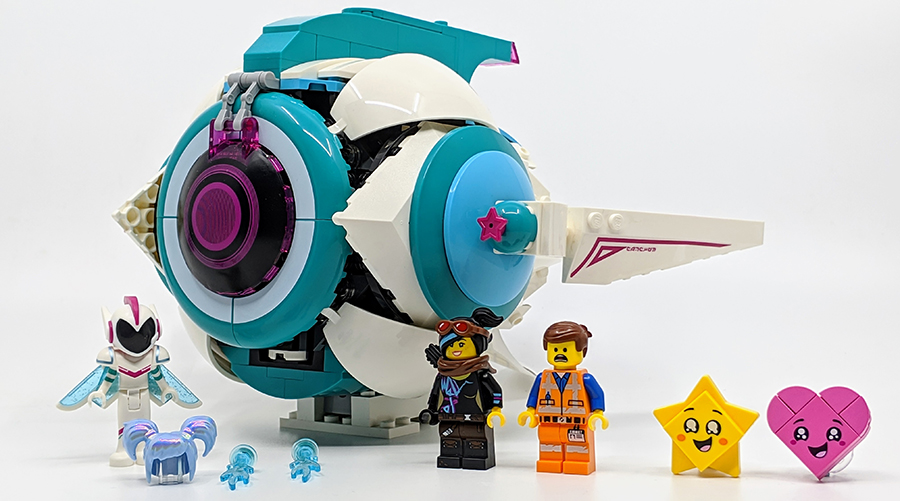 The LEGO Movie 2 range of sets features some impressive and unique looking builds, with one of the most unique of the sets being General Mayhem’s Systar Starship. As mentioned above this was one of the first sets to be revealed and plays a key role in the kicking off the events in the movie, in which a number of the Master Builders are kidnapped by Sweet Mayhem and taken to Queen Watevra Wa’Nabi. The actual set is quite impressive, getting curves and rounded shapes with LEGO elements isn’t that easy but thanks to some clever build techniques and great parts, the starship ends up being a very interesting looking build. 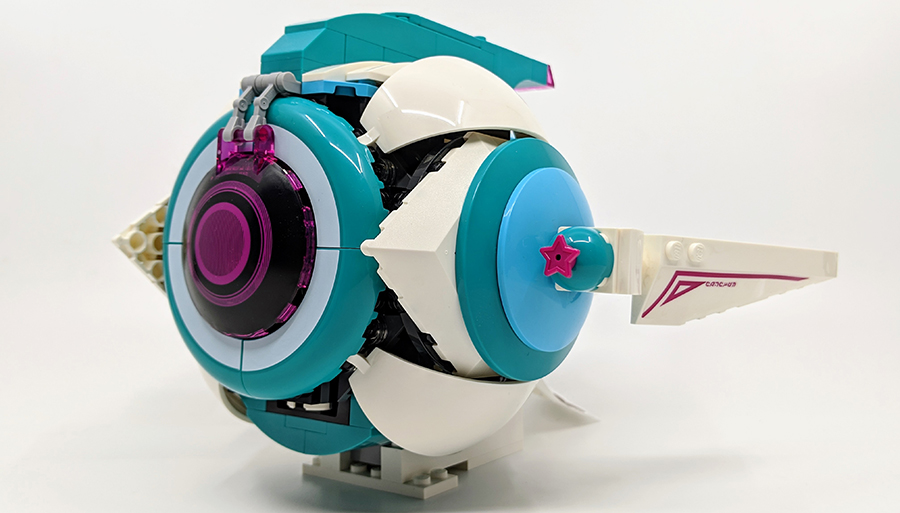 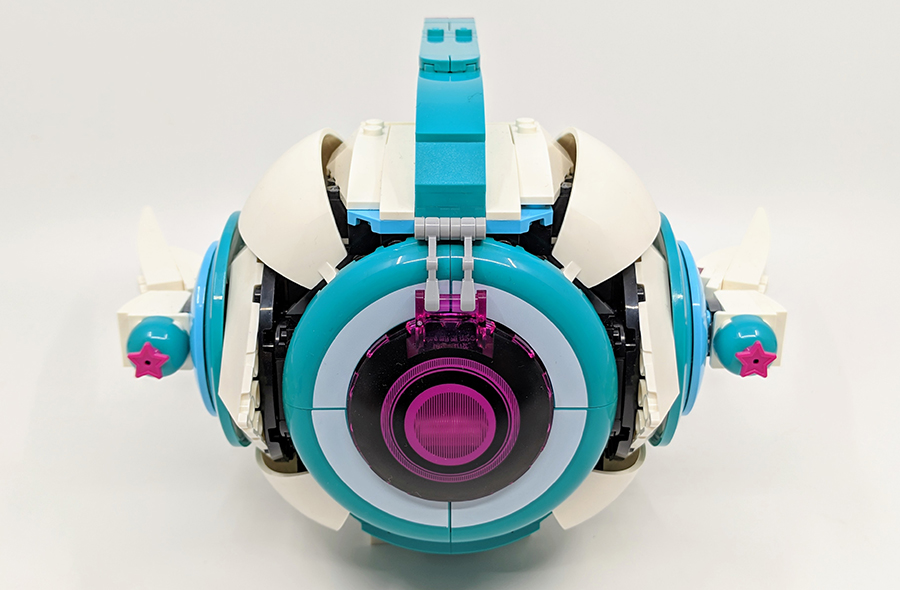 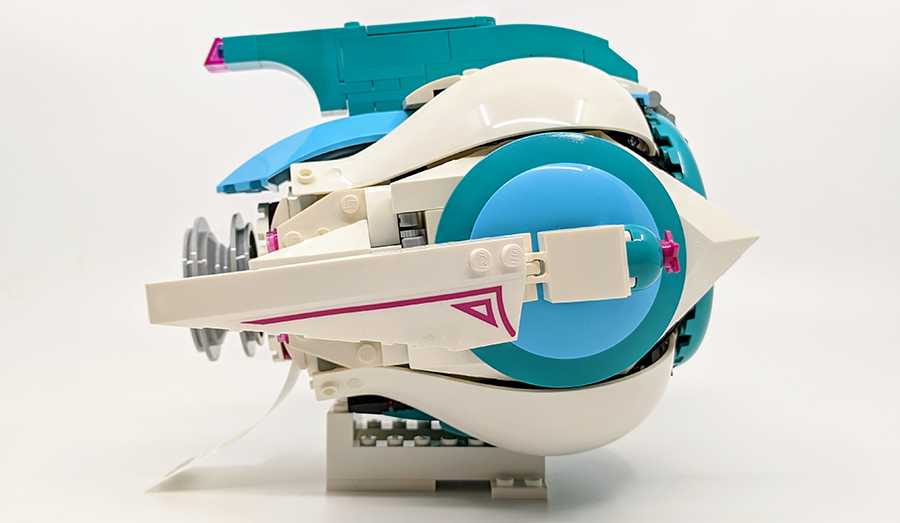 As you begin the build everything is rather blocky, in fact the core of the builds is basically a cube. The outer shell of the build is what gives it the almost ball-like shape. It features four of the curved blade type elements, which were used to create air balloons in Friends and NINJAGO sets. These clip to the front and rear of the ship and when combined with a combination of parabola’s, curved beams and a funky new cockpit hatch, they sudden turn a blocky build into this streamlined wonder. 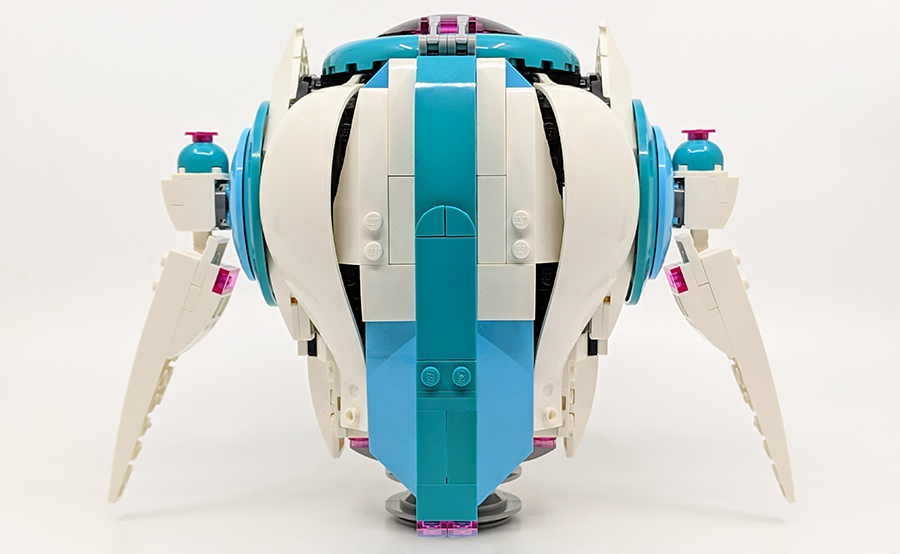 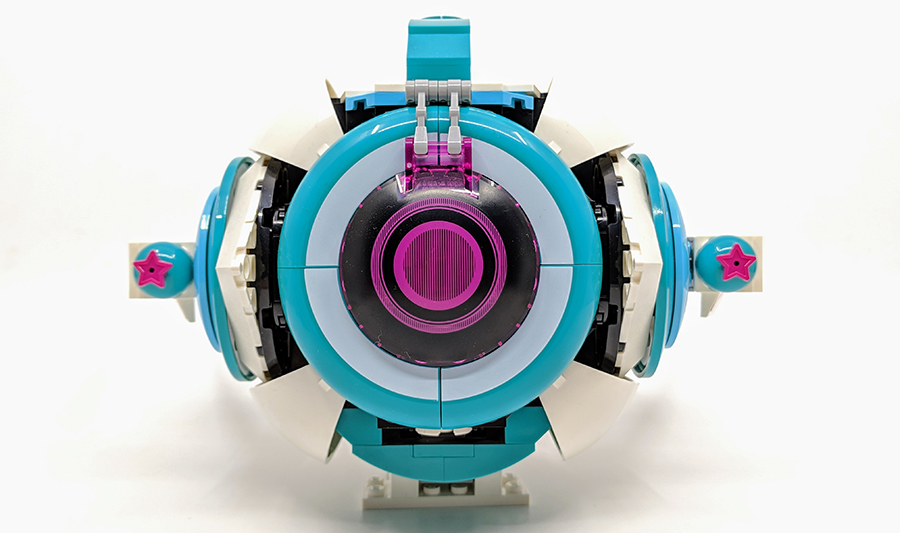 There are also some neat play features built into the set, these include a disc shooter under the cockpit, this fires a 2×2 flat tile when a plate brick is pushed forward. This is awkwardly located under the ship, making it tricky to rest the set on a flat surface. Either side of the side of the ship are two hinged panels which hide a containment chamber on one side, with enough room to house a Minifigure and on the other a weapons cache. Here you can store the Heart and Star grenades, along with a removable map screen which conceals General Mayhem’s sticker blasters. Leading nicely onto the sets most unique feature, a roll of stickers. In the rear of the ship is a space to fit a roll of stickers. These stick out a small gap and can be pulled to reveal a selection of emoji-type stickers. Additional sticker rolls are available from Sambro. 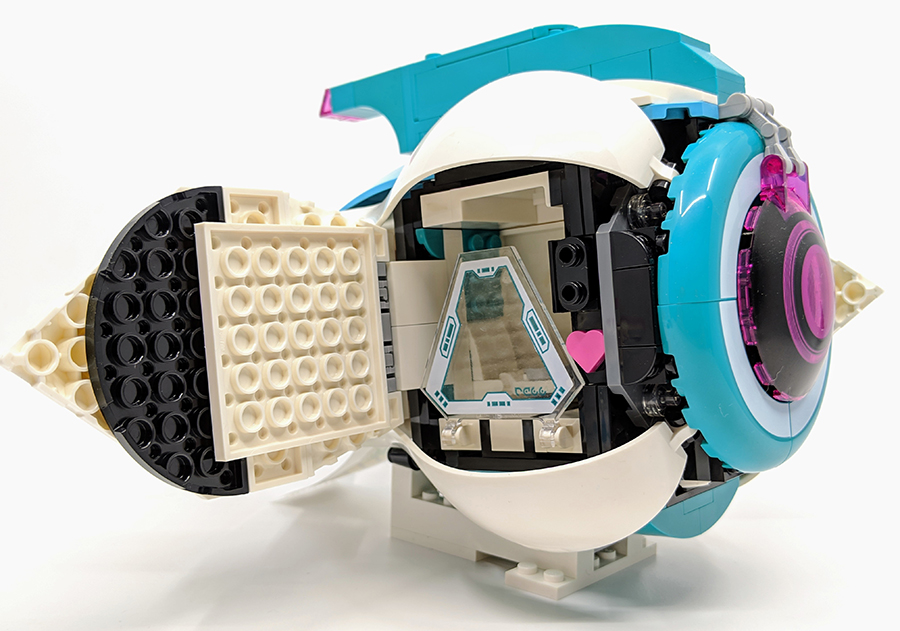 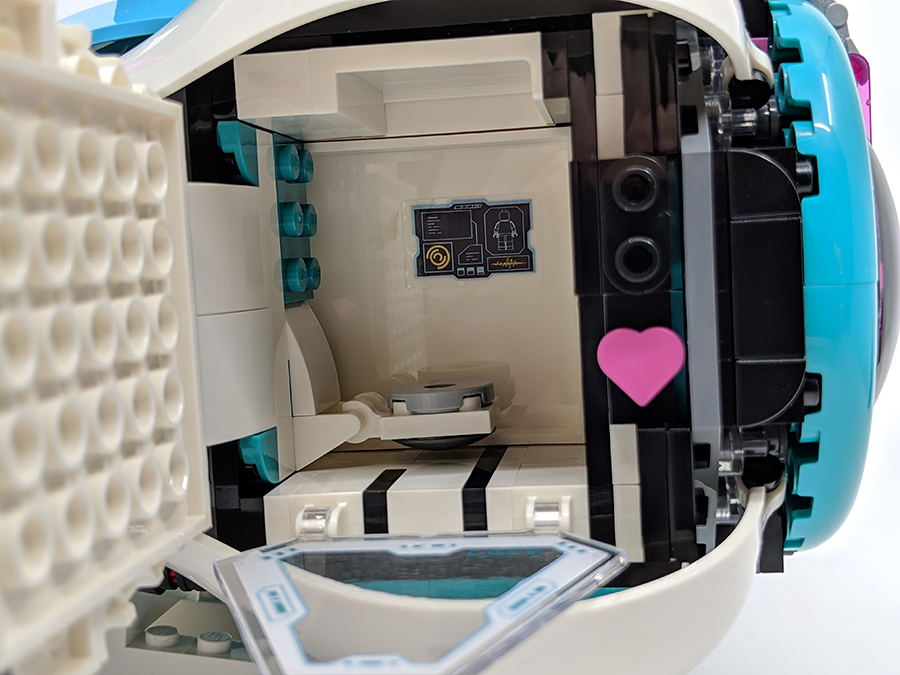 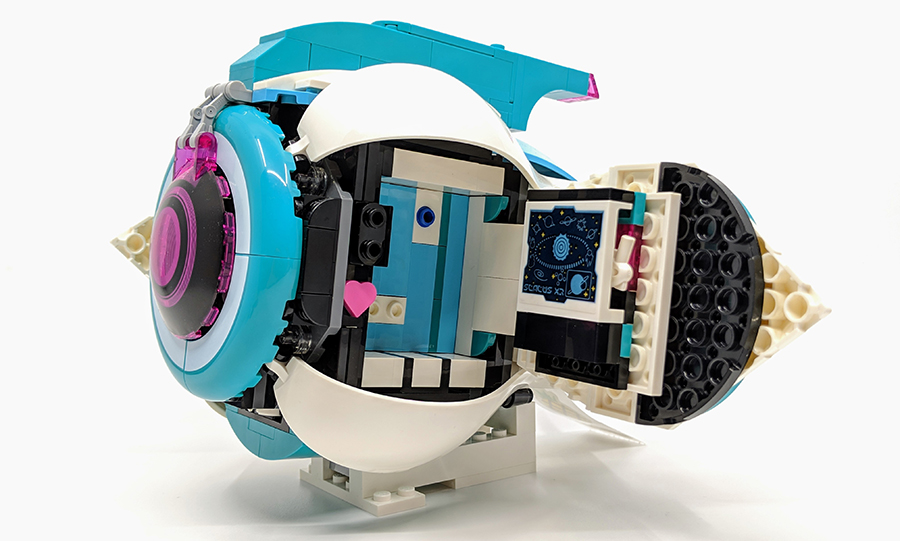 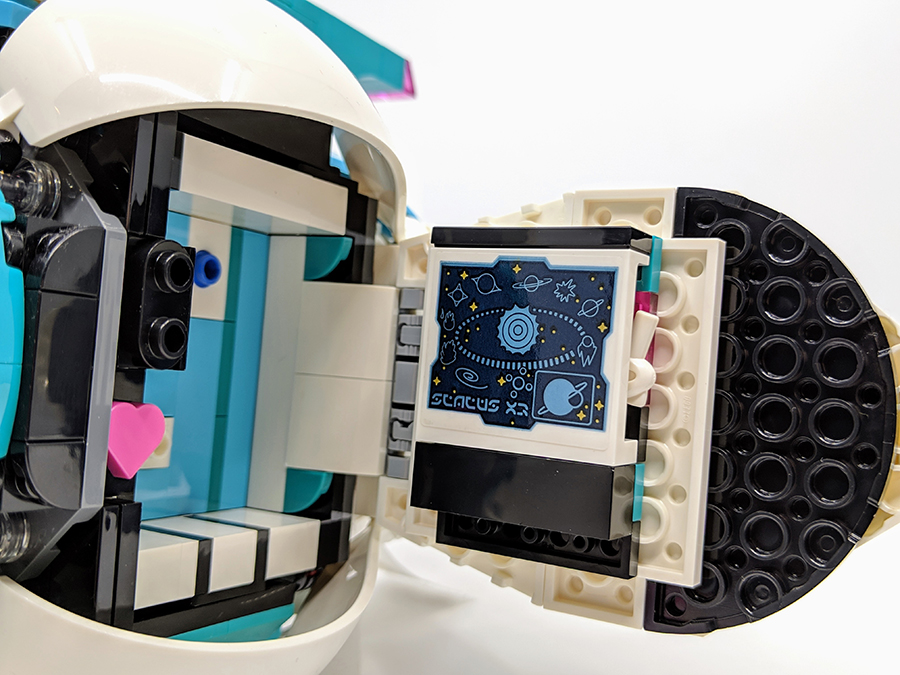 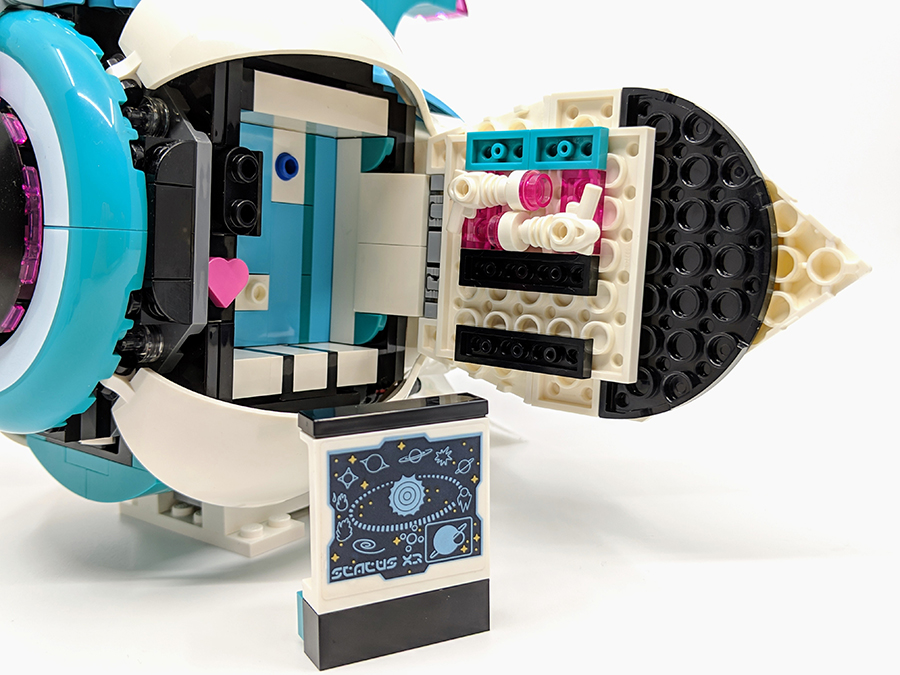 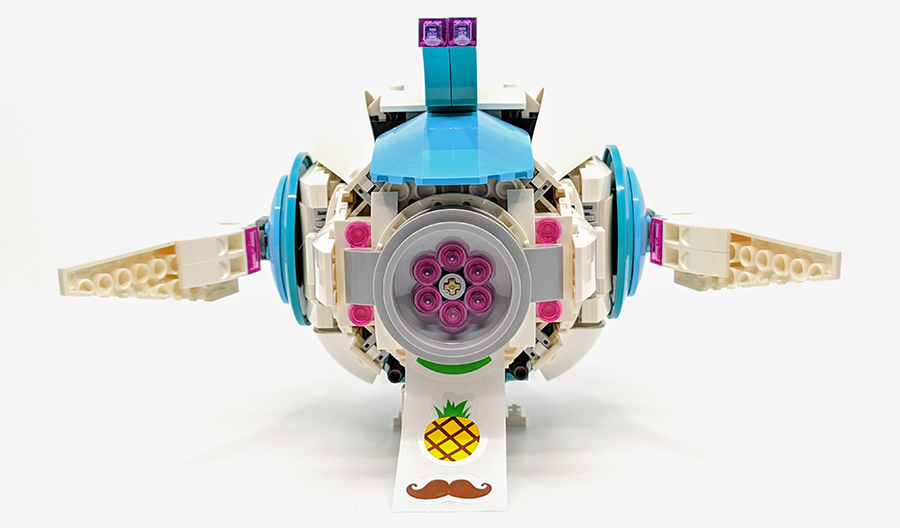 At the very front of the ship is a transparent pink disc, used as the ships cockpit window, this is where Sweet Mayhem can be placed to pilot the ship, it looks like a rather tight squeeze but there is plenty of room to sit Sweet Mayhem, once you angle her wings. All in all this is one of the better sets in The LEGO Movie 2 range, after the amazing but quite large Welcome To Apocalypseburg set, this is probably the set to pick up if you’re not planning on getting them all. It looks fun, is an intersting build and has an impressive selection of rare, new and recoloured elements. Plus it’s one of only a couple of sets to feature both Minifigures and a Mini-doll. 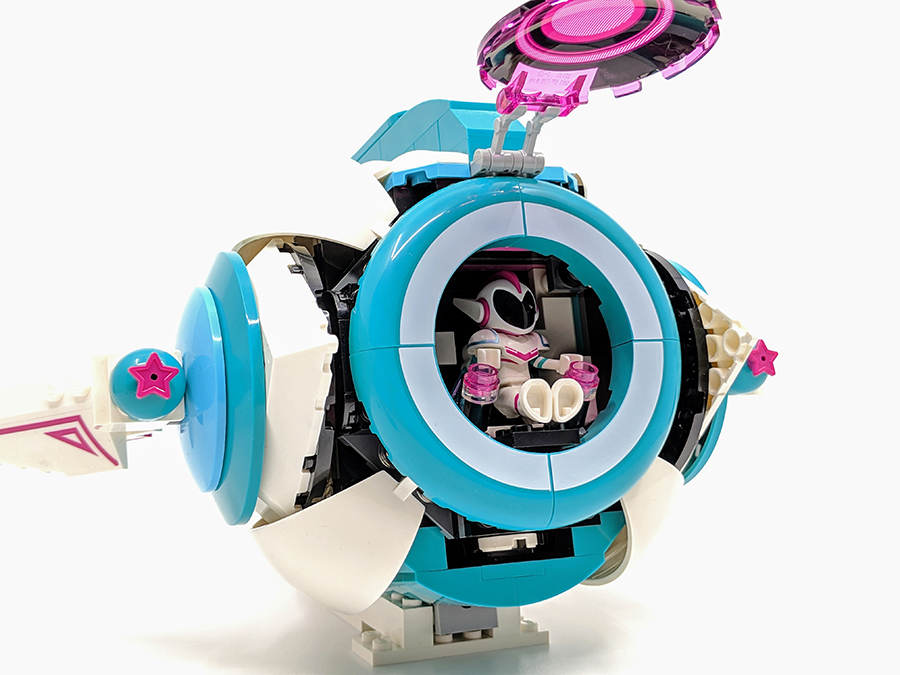 The set contains two Minifigures and a Mini-doll. Once again both Emmet and Lucy are featured. Lucy who is kitted out in her Battle-ready gear, with includes the new hairpiece with goggles and a neck scarf element which has a notch so it can be worn with a quiver piece. This version appears in three other sets including one of The LEGO Movie 2 polybags. Emmet is a little more generic, his print detail is a little worn but apart from that he’s similar to all his other appearances, however he does have a double face print exclusive to this set. Lucy also has an alternate face print. 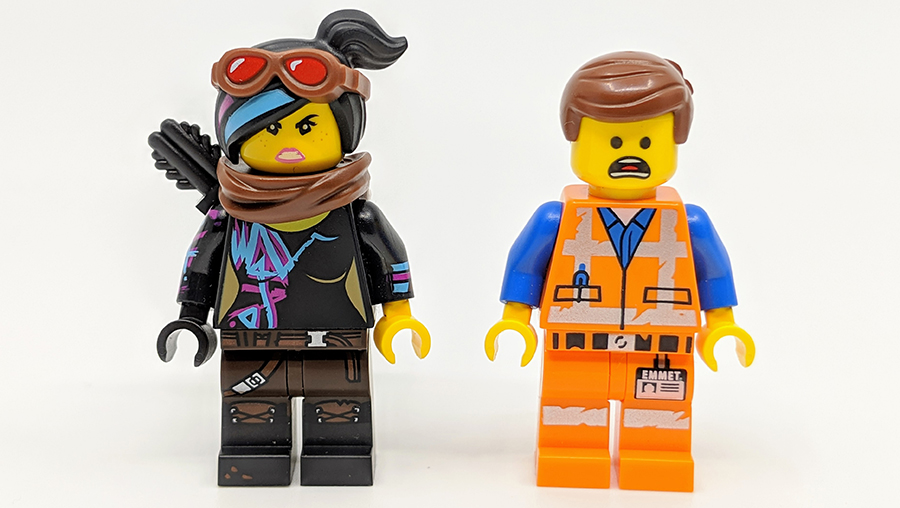 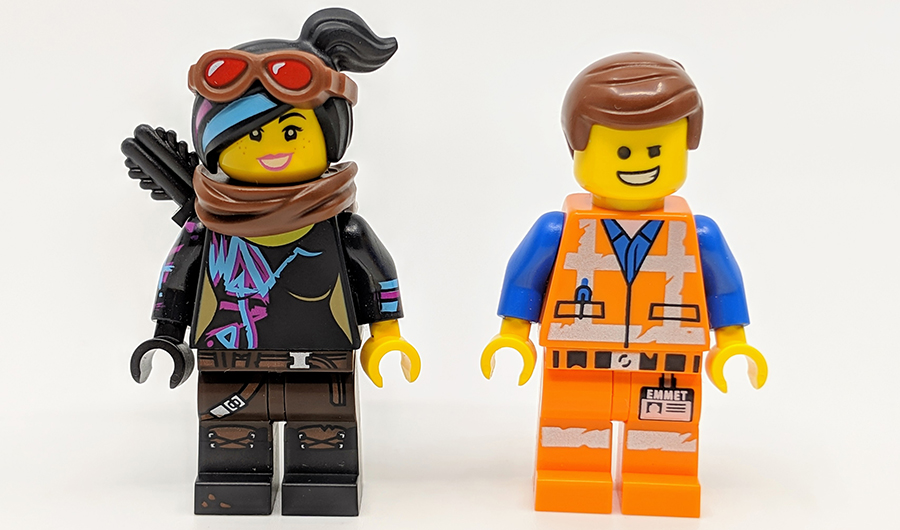 Talking of exclusive heads, Sweet Mayhem has a head expression exclusive to this set. Sweet Mayhem is a Mini-doll, similar to those included in the LEGO Friends sets. As well as her cool helmet, she also features a uniquely coloured hairpiece. In fact most of the pieces used to dress Sweet Mayhem are unique to the character. The wings are dual-molded with white plastic inlaid with blue transparent plastic, complete with a sprinkling of glitter. Sweet Mayhem has the same style head as other Mini-dolls and as previously mentioned, her wry smile expression can only be found in this set. 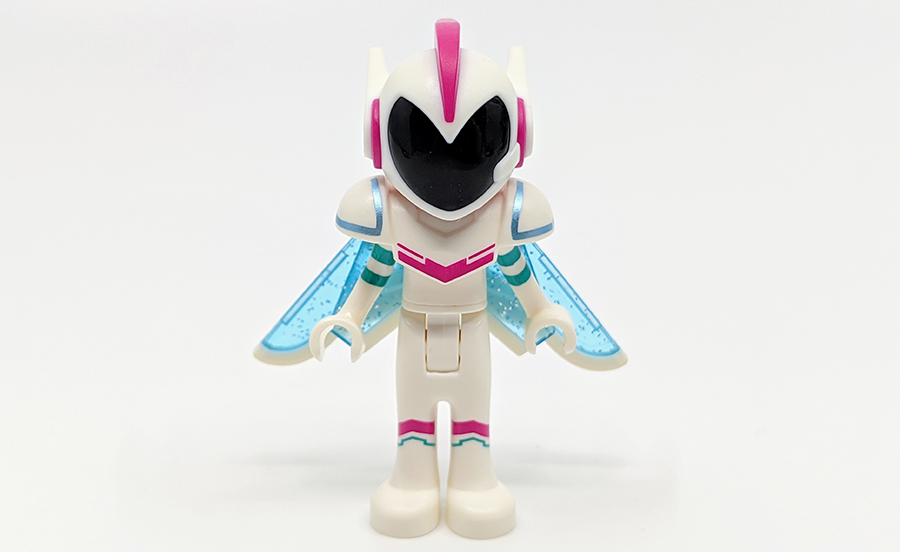 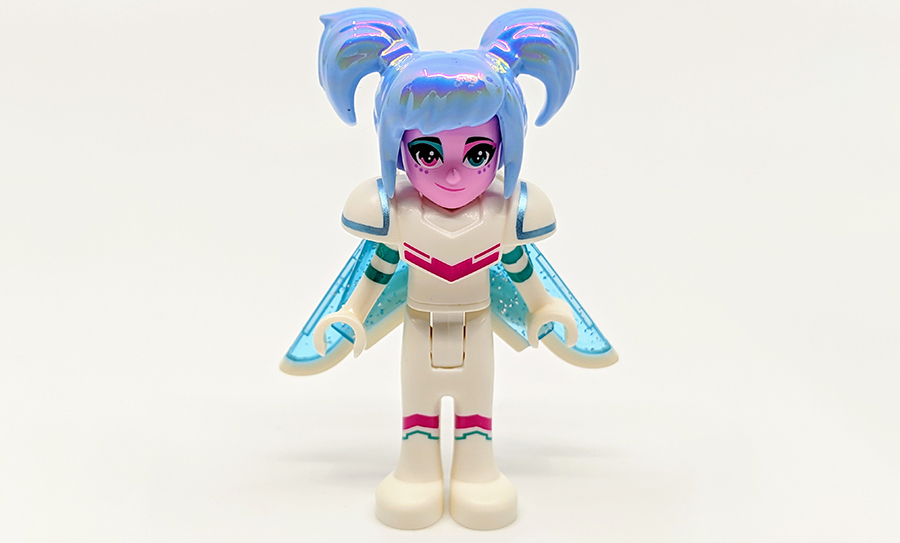 Finally the set also includes a Star and Heart grenade, although the are technically weapons, they sweet but deadly icons are bursting with character. A printed version of Star is also included on a couple of 2×2 flat disc tiles, these can be inserted into the ships disc firing slot.

The build of the ship is intriguing, as you construct it, you wonder how should a square and blocky base will result in such a curved finished model. One of the most interesting things about the set is the use of parts, those curved wings first used to create a hot air balloon in both a Friends and NINJAGO set, are perfectly incorporated into the build to help give it that unique shape. I also love the little sticker roll, which peeks out of the rear of the ship. But I can’t help thinking this is yet another set to feature Emmet and Lucy. In the movie and trailers, they aren’t the only characters to be present in scenes with Sweet Mayhem and her ship. One or both could of been swapped out for someone else. It would of also been nice if some sort of stand was included to allow the ship to be displayed when not being played with. Thanks to the sets impressive use of parts and unique look, it’s certainly a great set to add to your collection, for a number of reasons. 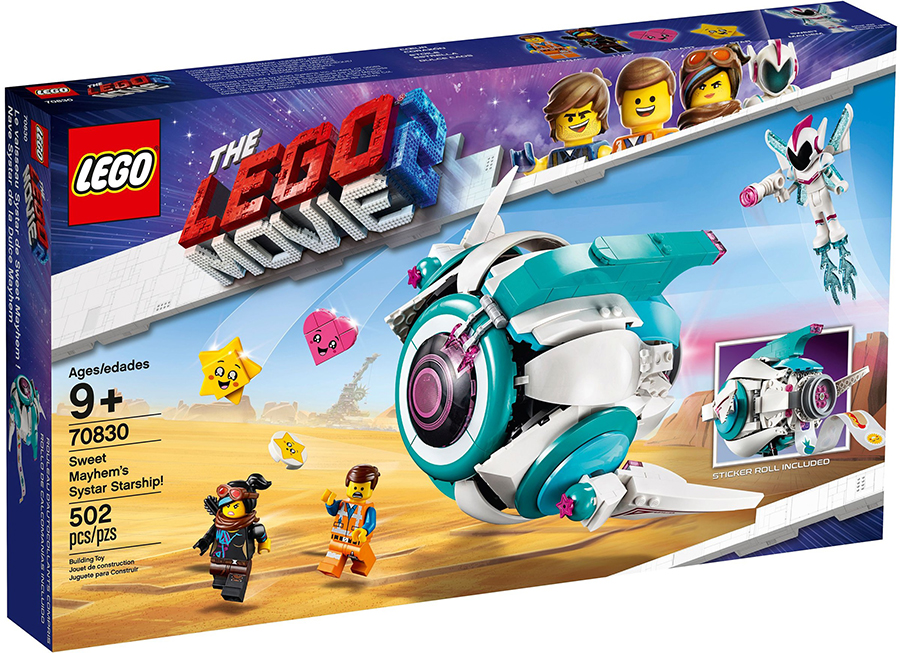