After taking on the Sons of Garmadon, the Masters of Spinjitzu will soon find themselves torn in two. As Nya and Lloyd remain in NINJAGO City, the rest of the ninja are flung into a barbaric realm, where dragons are hunted by a gang of tyrannical misfits, lead by the Iron Baron. On June 1st the brand new range of LEGO® NINJAGO sets arrive in stores and we’ll built one of the smallest sets in the new range – Destiny’s Wing. This funky little fighter plane is piloted by Kai, as he takes on Jet Jack, in order to harness the ancient power of the Dragonbone Blade. So let’s take a look at this interesting new LEGO NINJAGO set. 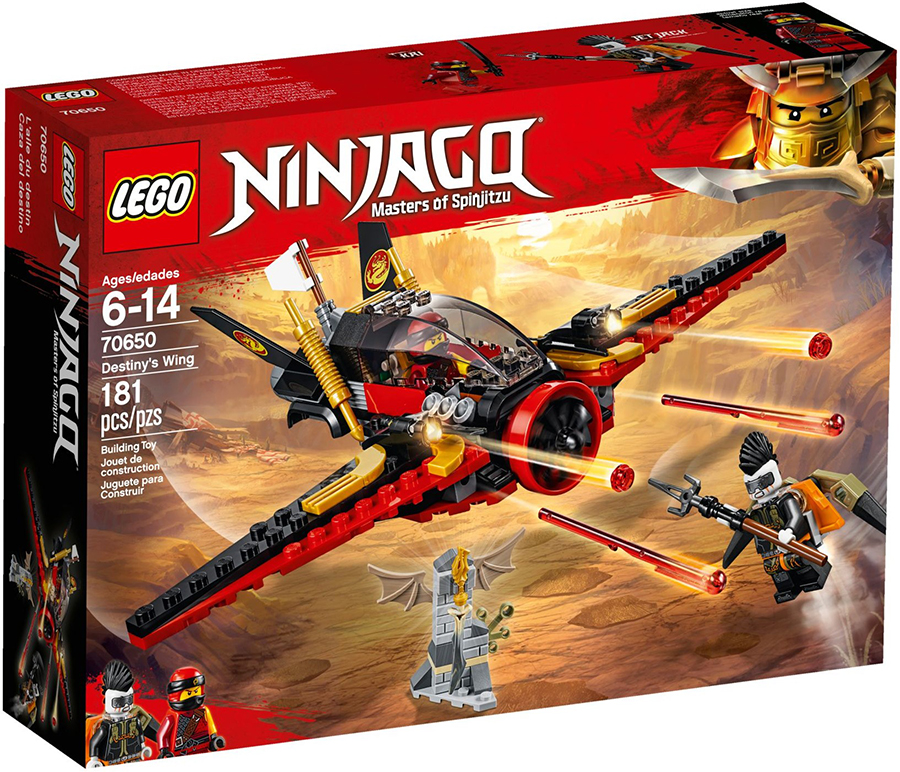 Pilot LEGO® NINJAGO® 70650 Destiny’s Wing with ninja Kai and battle Jet Jack for the Dragonbone Blade! Destiny’s Wing features an opening minifigure cockpit and is weaponized with both spring-loaded and stud shooters. This set also includes a pedestal to hold the Dragonbone Blade, plus 2 LEGO NINJAGO minifigures with weapons and Jet Jack’s jetpack to bolster the role-play conflict. 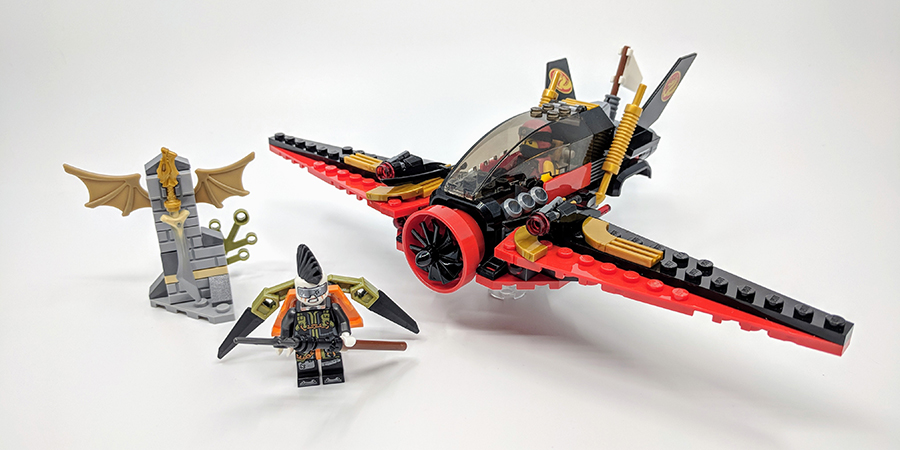 The NINJAGO theme has seen it’s fair share of flying things from crafts and boats to dragons and spinners. There’s also been a couple of planes, but none as unique as Destiny’s Wing. This has its wings mounted towards the front of the plane, making it look a little like a Spitfire. The colour scheme matches that of Kai, with the body and the wings of the plane prodominatly black and red, trimmed with dashes of pearl gold. Each wing includes both spring-loaded bolt firing bricks and a couple of stud blasters. We’re quite the fans of using existing parts in fun new ways, so the use of a couple of re-coloured barrels for the planes exhausts is a treat. 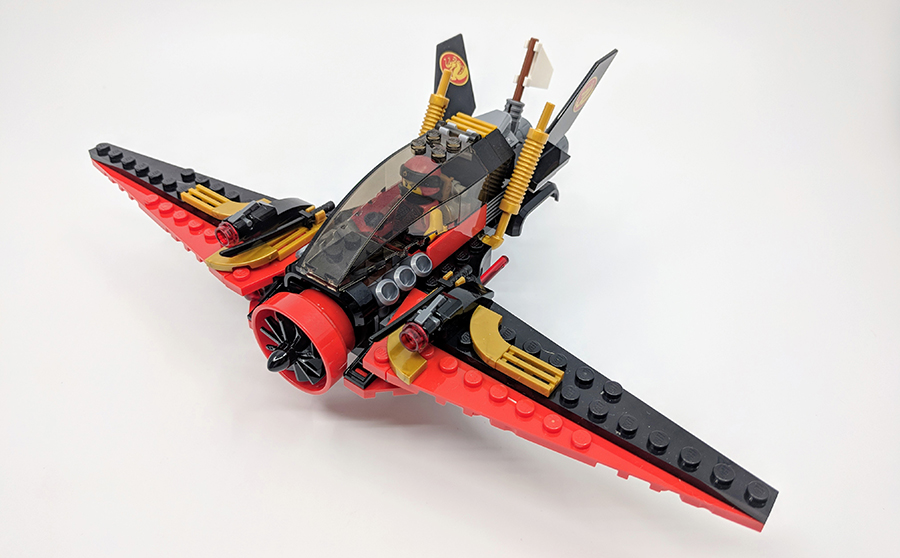 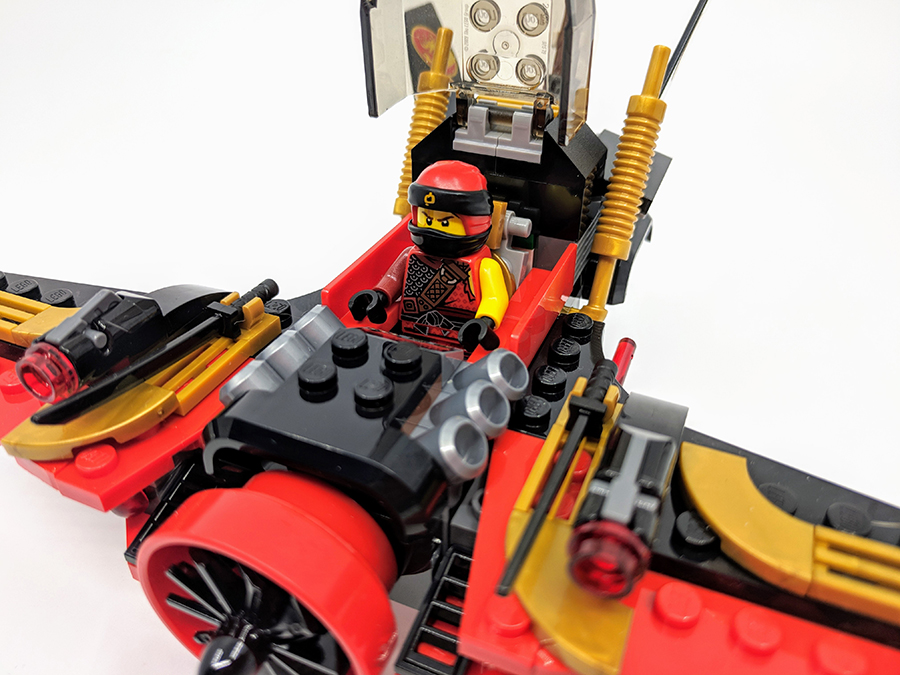 The rear of the plane also includes a couple of fins, which includes the sets only use of stickers. This is the symbol of the golden dragon. Thankfully it’s a easy enough surface to pop the stickers onto and there add a much needed bit of detail. 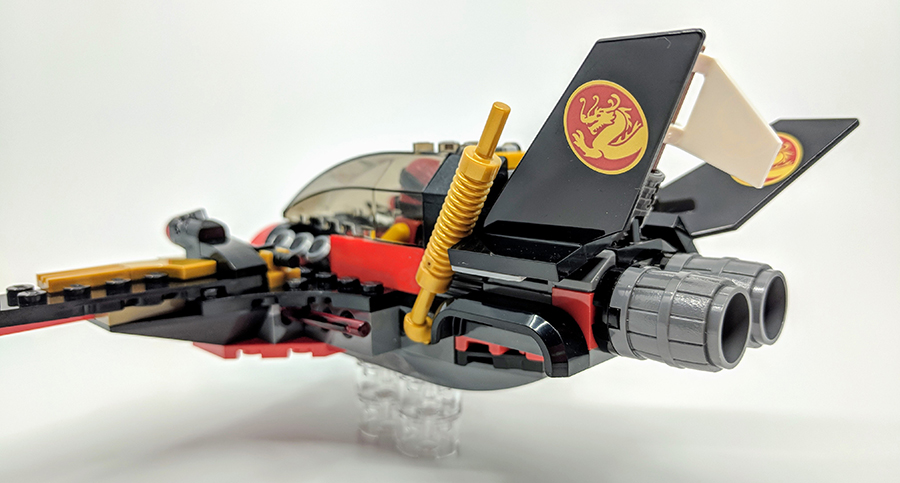 The Dragonbone Blade is mounted upon a stone pedestal, this is a fitting way to display the mystical weapon. You can imagine finding it hidden within the ruins of an ancient crumbling temple. The addition of the wings may seem a little odd but as you can see below, with the blade clipped in place, it makes it look like a mini dragon taking flight. Although not a major part of the build, Jet Jack’s jetpack has a little bit of building going one and is surprisingly sleek in in design. 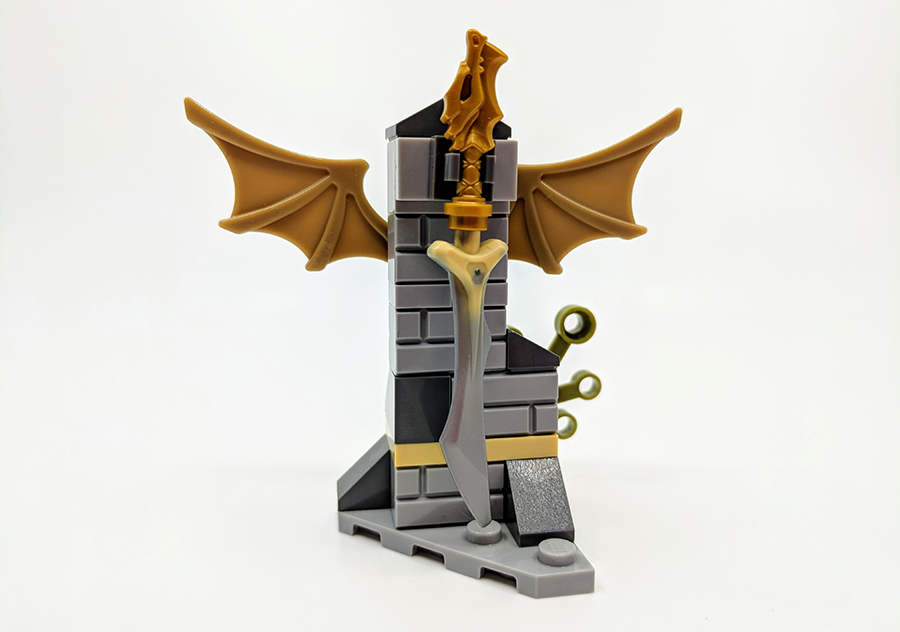 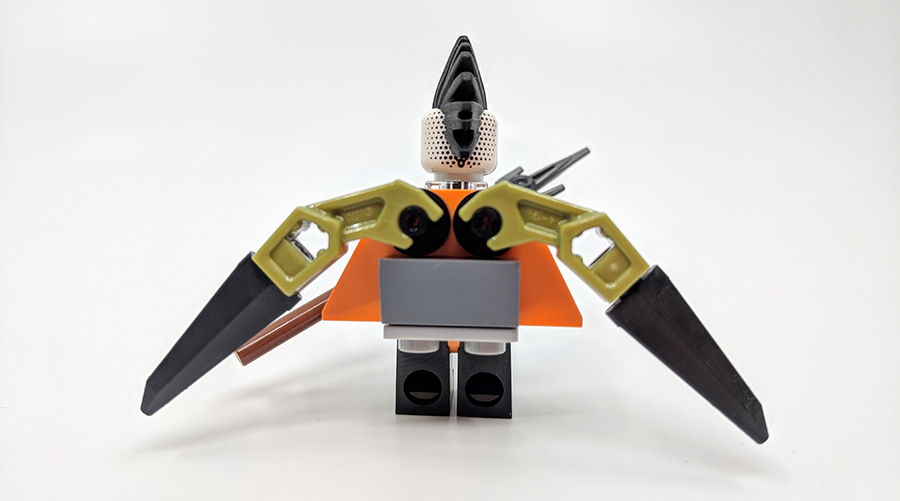 The set contains two minifigures Kai and the awesomely named Jet Jack. As with the changes made to the NINJAGO characters, Kai features the new style ninja outfit, which features the movie-style ninja hood and face print. Kai’s outfit is a little different this time around, and features a torn and missing sleeve. Jet Jack is a cool looking bad guy, with a pale face adorned by scars and a menacing grin. Jack’s outfit is quite cool as well, as it look a lot like a skydivers overalls. 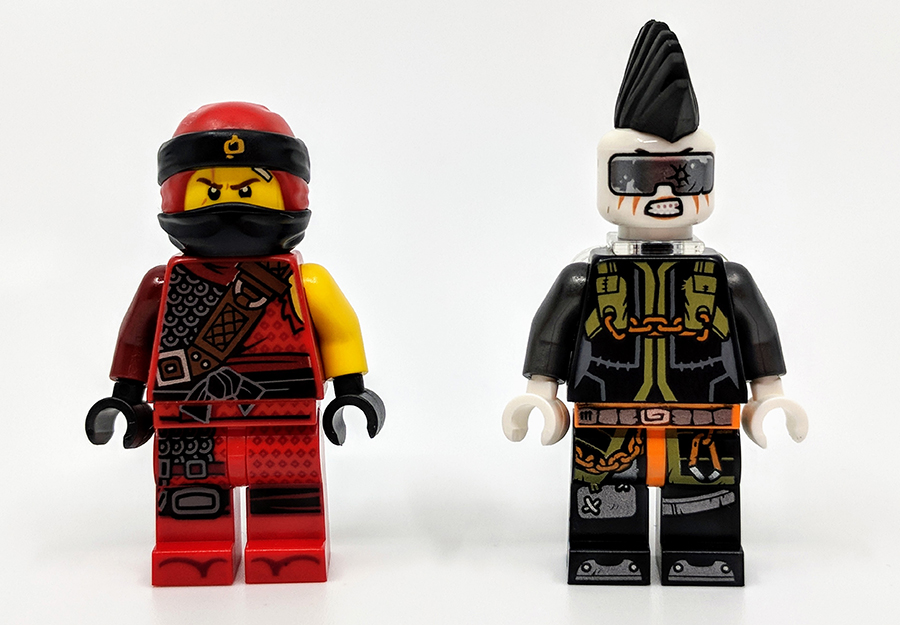 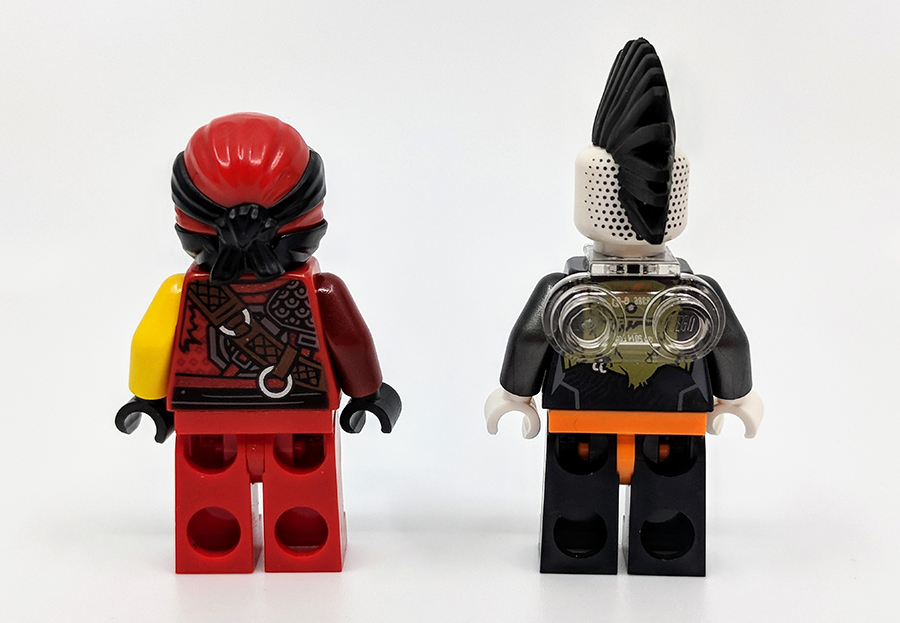 Kai includes a couple of black katanas but can also harness the new Dragonbone Blade. This fun new weapon is part of the legendary Golden Armour. Each set includes a different piece of this, meaning to complete the armour you’ll need to grab most of the other Dragon Haunters sets. The Dragonbone Blade is made up of two parts – a golden hilt, which is part lightsaber handle, part dragon head. This is joined by a dual-coloured blade, which features a mix of silver and brick yellow ABS. Jet Jack has a staff topped with a ninja knife blade but also includes a cool looking bladed jetpack. 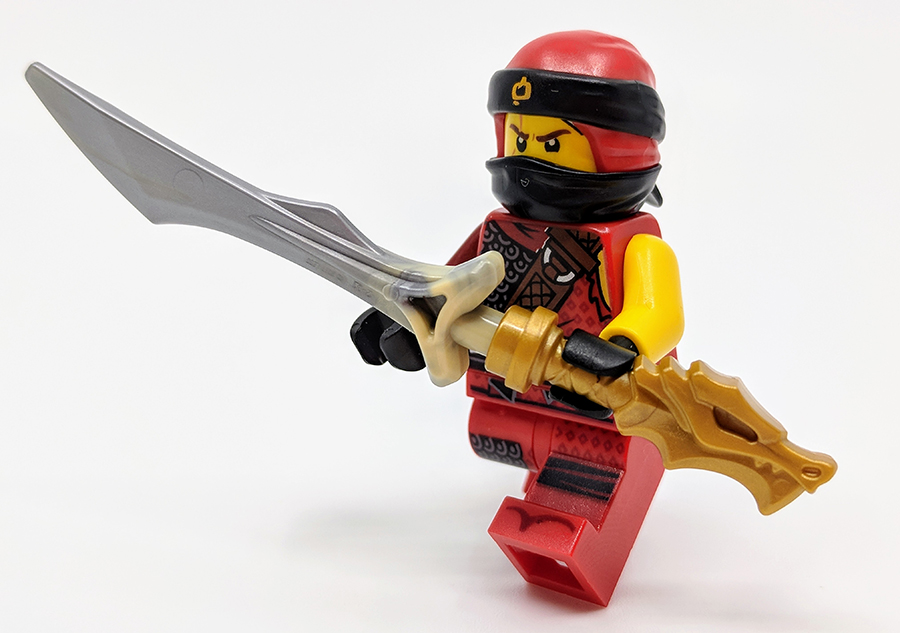 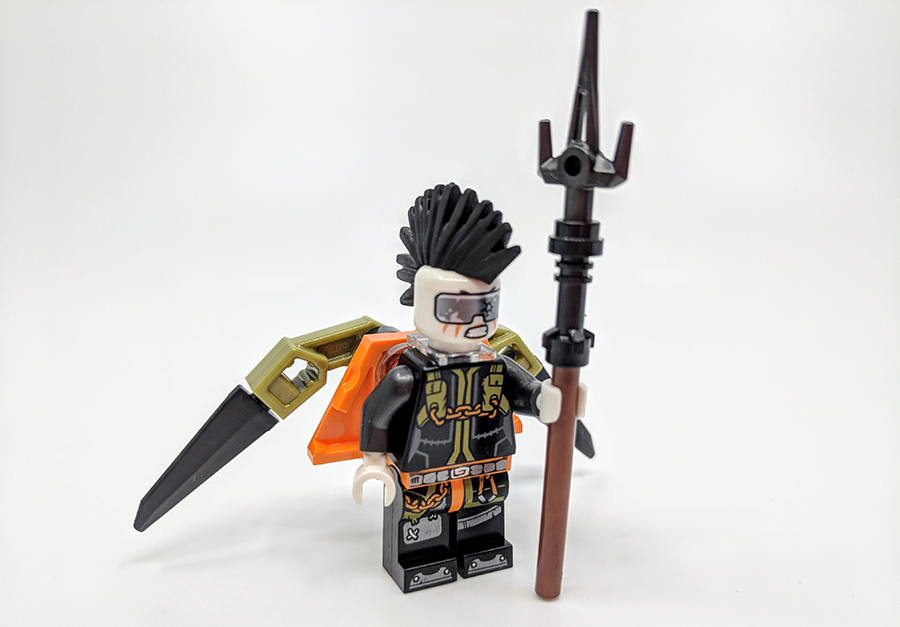 It’s a great little set, with a interesting take on a aircraft. The two minifigures are pretty cool especially Jack, who has awesome print detail and jetpack. Plus it’s not often you get a female bad guy. The Dragon Armour is a nice addition although you’ll need to grab more set in the range to complete it.