Trains are rather fun addition to the world of LEGO® and over the years there has been a fair few different ones. But even the the railroads of Newbury aren’t immune from the spooky shenanigans of the Hidden Side. The Ghost Train Express is one of the largest of the new Hidden Side sets. Featuring a Train, Station and section of track, the set is packed with detail and some interesting play features. One of my ‘white whale’ sets was the Monster Fighters Ghost Train, and I managed to get one last year, so I was very interested to see how another LEGO ghostly choo choo would compare. Grab your ticket and get ready to board my penultimate LEGO Hidden Side Review. 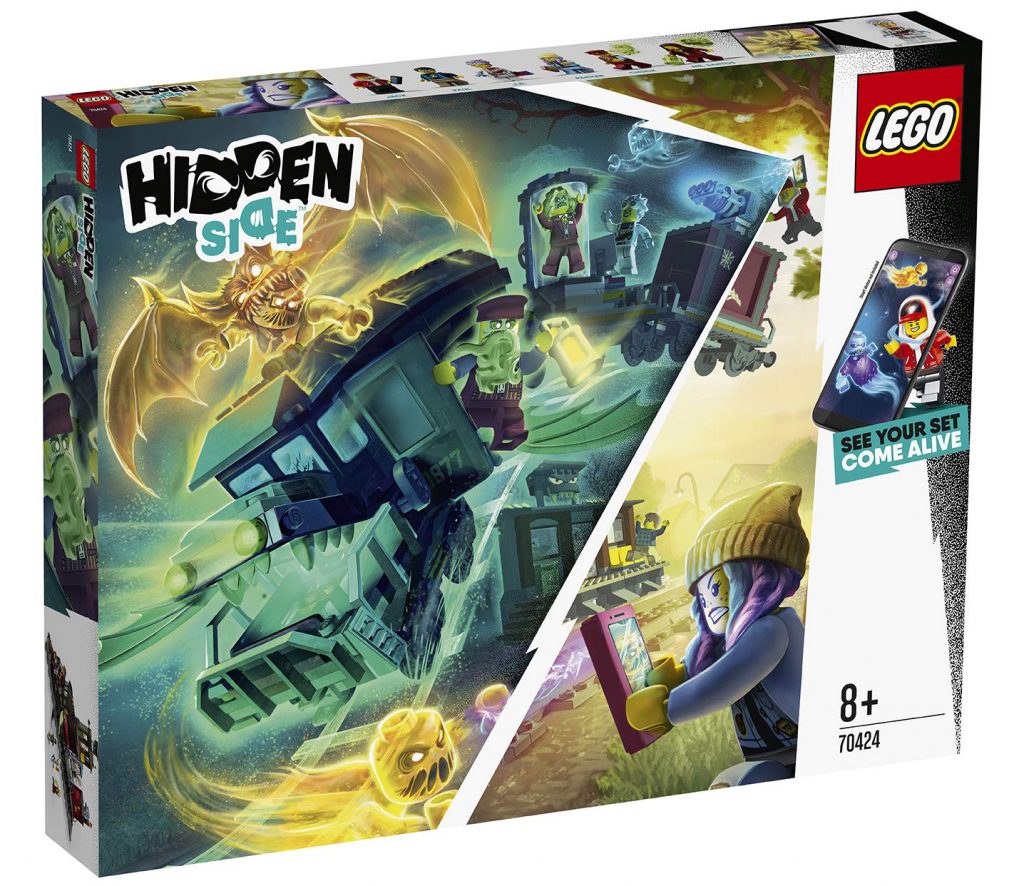 Immerse kids in the ultimate augmented-reality play experience with this exciting LEGO® Hidden Side™ 70424 Ghost Train Express playset. This awesome toy combines a buildable LEGO model with an augmented reality app to deliver a fully interactive play experience. Download the Hidden Side app and scan the model with a phone to make it come alive – interacting with the model makes things happen in the app. And with continuous updates, a unique boss ghost to battle in each set, new mysteries to solve, cool items to find, games to play and ghosts to collect, this LEGO Hidden Side set gives kids a whole new way to play and interact with LEGO bricks! This awesome train playset features cool, high-tech, ghost-catching details to inspire hours of imaginative play. And with 5 minifigures, including heroes Jack and Parker, there are a lot of play-starters so the action can start right away 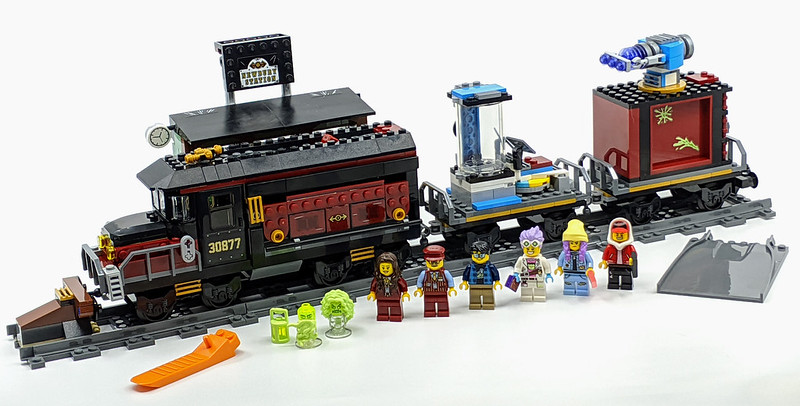 Like many other LEGO train sets, as well as a train, you also get a small station. Which is where the build begins, the station is rather small and more like one you’ll past in those strange backwater towns. The station comprises of a small raised platform which has connection points for the track. The actual building uses mainly brown elements, but there are flashes of sand green, which is used across most of the Hidden Side sets. There are some great little build techniques here, which add nice details. I love the green recycling bin and the steps up to the platform. Inside the station it’s a little more bear, which use a ticketing machine to found there. This along with the Newbury Station sign, atop the station roof, both feature a familiar logo. LEGO fans will instantly know the dual arrowed logo is often featured on LEGO train based sets. Although the set features some track, you don’t get enough to build a circuit. Instead you get four sections of straight tracks, one of which you build a buffer on and at the other end is a new piece, which is best described as a roll on ramp. The connects to standard track, but allows the train to pushed from a flat surface onto the track. 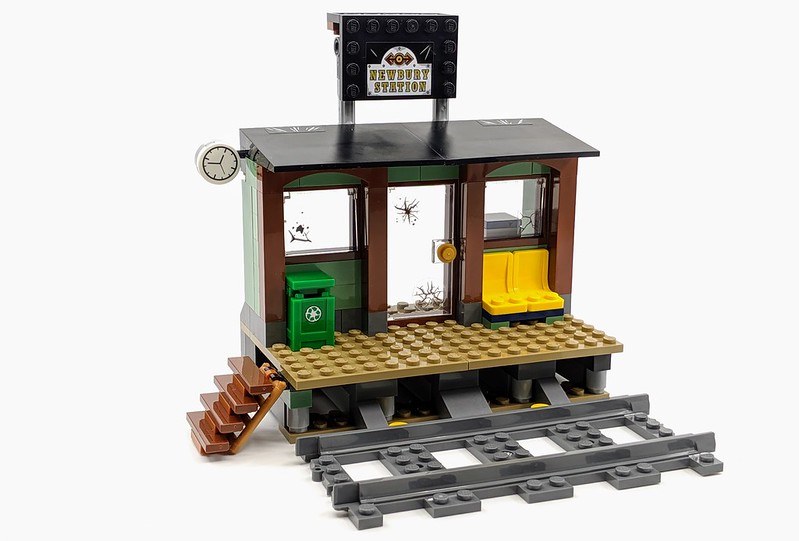 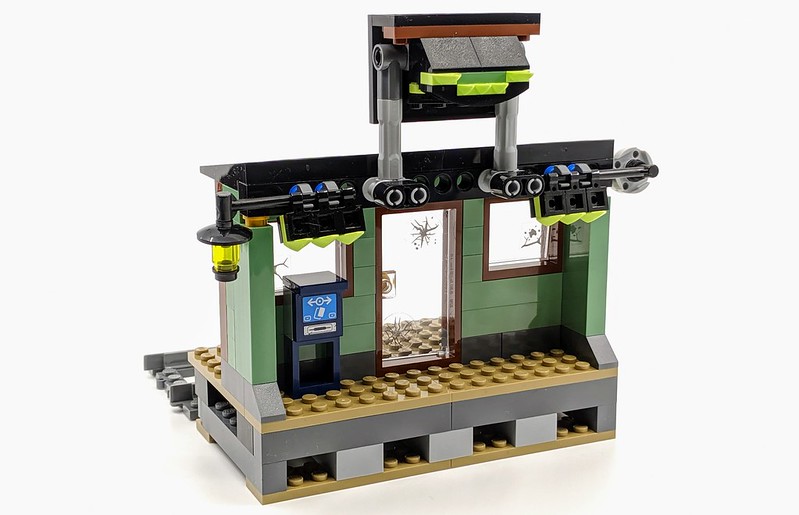 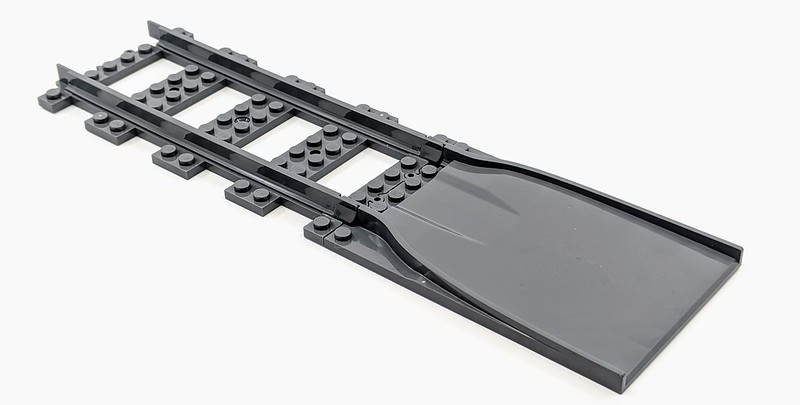 Like many buildings in Newbury, there is something a little strange going on with the station. The Hidden Side has managed to possessed Newbury Station, which is portrayed by flipping down the station sign and twisting the clock. This reveals a evil looking face and two clawed hand, these look like the ‘Gloomed’ monster is peeking over the roof of the station. The gubbings to make to the claws appear make not look great around the rear of the building, but the look awesome once ‘activated’. 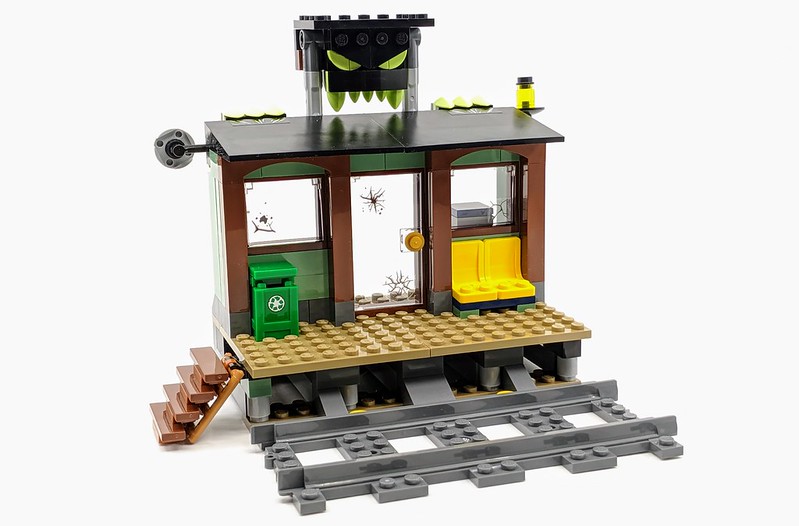 Much of the aesthetics of the Hidden Side sets are grounded in mid-western Americana. Which is very evident with the train in this set. It looks very much like the train engines you’ll see rumbling across the States. It’s unlike any other LEGO train I’ve seen, with its extended front ‘nose’, for which there is a reason for (more on that later). The front cab has enough room to house a Minifigure and can be accessed by popping off the roof. But the train is hiding a very clever and equally annoying play feature. The side panels of the train are hinged, with a switch on the roof. Pulling this back flips out a pair of ghostly pale green wings from those panels. The action is very satisfying and is truly hidden. The other stage of the possession is found under that ‘nose’ front, a small grey switch near the cab, causes this section to flip up and reveal some teeth. The action for this is rather jarring and certainly not as smooth as the wings. The motion of opening the mouth catches ever so slightly, in fact on couple of occasions I found the action causing the front 1×4 wall element to be flicked off. But if you aren’t heavy handed it should open as intended. 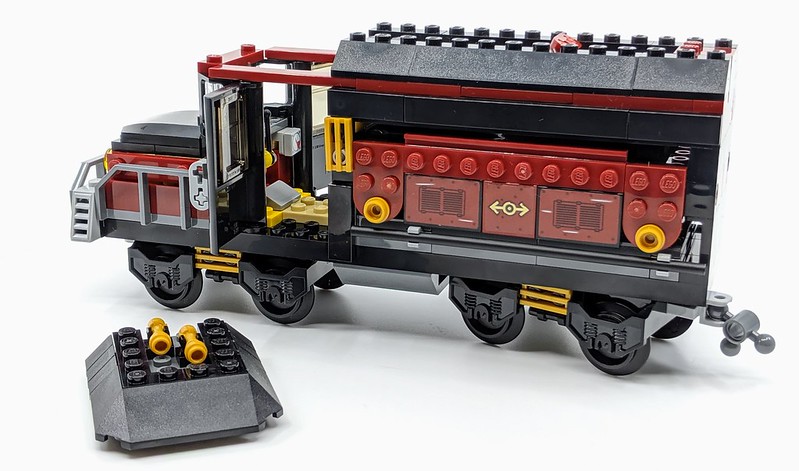 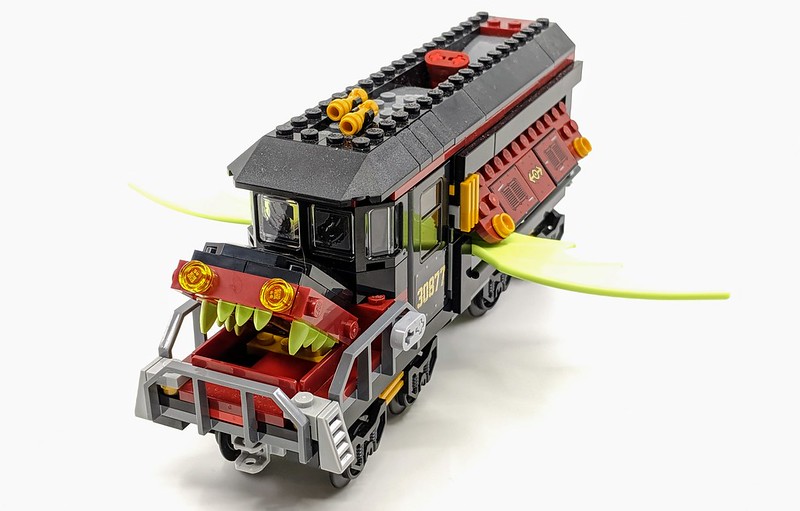 As well as the engine, the train features two additional carriages. The first of which is a containment chamber built by J.B. This continues with the blue and white colour scheme of many of J.B.’s contraptions. The chamber can be opened to place a ‘gloomed’ Minifigure within. The rest of the carriage platform features the coloured dial needed to play with the sets AR functions. The whole part of the platform can be removed from the base of the carriage. 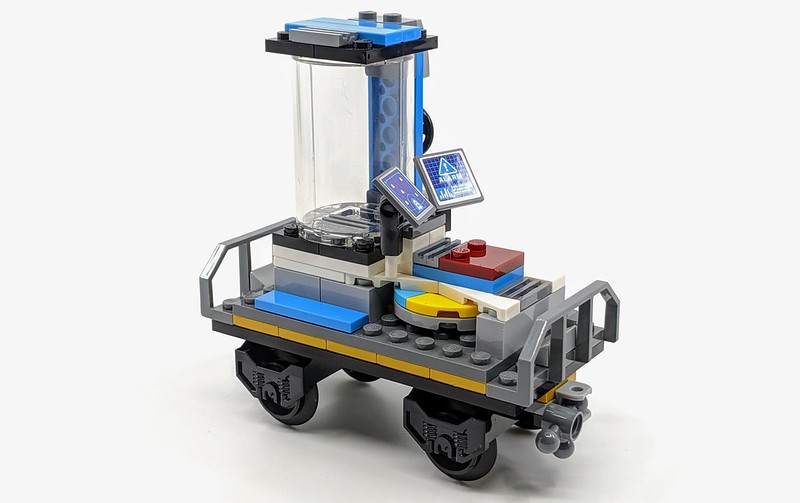 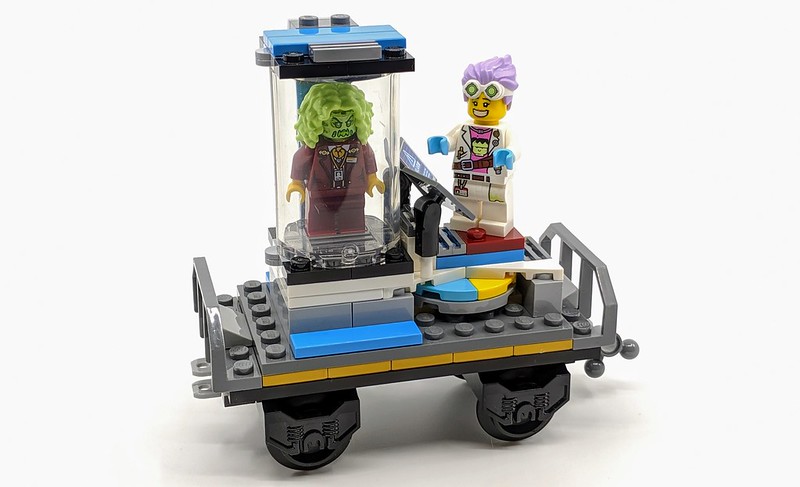 The final carriage mixes the dark red colour of the engine, with J.B.’s tech. There is a small box, which can be accessed from by a couple of doors at the rear and on top of it is a de-hunting gun. This looks like the other ghost catching tech seen in other Hidden Side sets. I like that this has been kept uniform across the builds. All of the details featured on the set are achieved by stickers. The best of which are found on the last carriage in the form of graffiti. 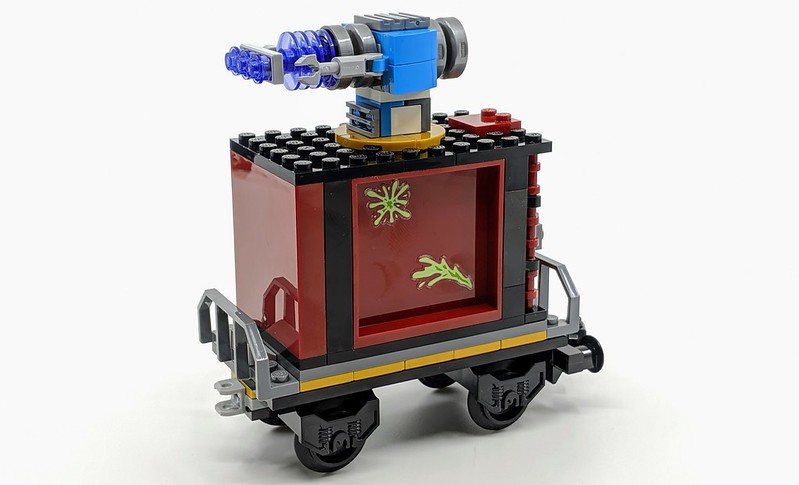 The Ghost Train Express is one of the first LEGO trains sets to feature new wheels. They look similar to other train wheel elements but feature a new housing for the wheels. The old style wheels featured a metal rod connected set of wheels. The new version does away with these to have four independently spinning wheels. They are still fully compatible with existing LEGO train tracks and powered functions. One thing that is a little different is the coupling connections between the engine and first two carriages, this uses a Technic ball connector. Although the final carriage has the traditional magnetic connector. 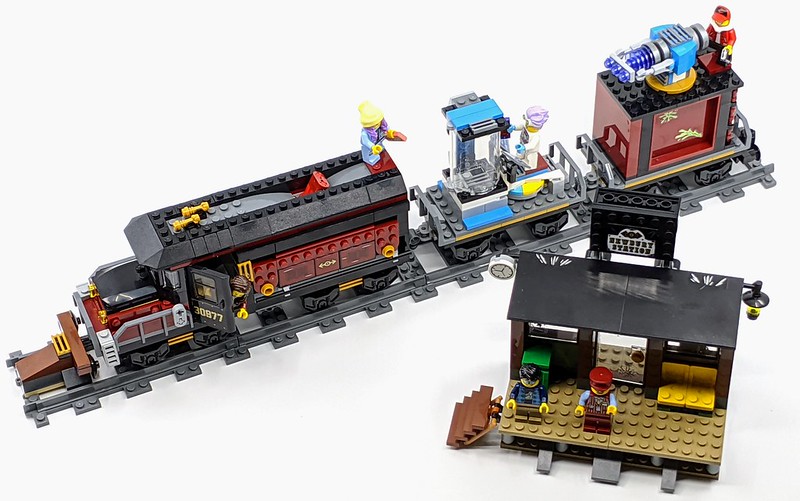 The set features six Minifigures and two Hidden Side spooks. Both of the Hidden Side’s main characters are once again present, with Jack and Parker being the same versions as the ones which are found in two other Hidden Side sets. Jack’s in his red jacket and hoodie combo, with Parker in her nicely detailed jean jacket outfit. I do like these pair but would have like a little more variety across the sets. Hopefully this will happen with the second wave of sets. Jack and Parker are joined by their science loving mentor J.B. This is the only version of J.B. in the current Hidden Side sets. Despite the lack of difference, I really like J.B., she is a great looking Minifigure, with a cool new hair element and an expressive set of faces. I also like her blue gloves and detailed torso.

The main characters are joined by three other Minifigure, which are exclusive to this set. These include rail passenger Paul, who uses a mix of previous Minifigure parts and an exclusive torso. This features a banana logo, similar to the one in DC Comics set ‘Gorilla Grodd Goes Bananas’. He is joined by new rail workers Ms. Santos and Chuck. Both have exclusive torso, which are mainly coloured in Dark Red to match the train and station. There are nice little bits of detail on both torsos, the best of which is that familiar LEGO City trains logo. It’s nice to see Newbury exist in the same universe as LEGO City.

These two character have the pleasure of becoming ‘Gloomed’ Ms. Santos gets her head and hair replaced with Chuck gaining a spooky beard and new head. The Soul Artifact for this set is a gloomy lantern.

One of the additional play features of the Hidden Side sets are an AR powered game. The set is perfectly fun on its own, but you can enhance play with the addition of the LEGO Hidden Side AR app. This brings the set to life by overlaying graphics and animated elements around the physical set. Once you scan the set, it comes to life with an animated background and moving elements. Scanning the Ghost Train Express instantly has the set trundling along the railroads of Newbury, with the station also springing to life. When battling ghosts the train comes to a halt but like other vehicle based sets, once the boss battle commences the trains begins moving again and the AR functions can suffer a little.

This is another great addition to the Hidden Side line-up. I love the haunted functions, especially the wings and the station. They are only let down by the mouth section at the front of the train. I double checked the instructions and rebuilt it a couple of times just to make sure I hadn’t made a mistake, but everything seemed to be in the correct place, it’s just a unfortunate blip in an otherwise impressive set. It’s also a great set to incorporate into other City based scenes. The haunted elements are very well hidden, which makes the train look completely normal. I like the new wheels, they feel a little more like LEGO elements without metal rod, but I understand they have caused a little concern within the LEGO train community; but I’m sure with a little tweaking they could be replaced with the older versions, should you wish to have them there. The various Minifigures are a nice addition, although as mentioned above, a little more variety in the heroes would have been welcomed. I really enjoyed building this one, especially seeing how well the wings are built into the inners of the train.