With the free LEGO Hidden Side set promotion now on, it the perfect time to continue with the Hidden Side set reviews. Newbury’s foody hotspot maybe hiding a spooky secret but that doesn’t stop the residents partaking in its delicious shrimp. So to keep the Shrimp Shack in seafood treats, Captain Jonas and his son, head out shrimping on their boat. But even the waters of Newbury can’t escape the spooky happenings, and that’s not the only dangers in the water. The Wrecked Shrimp Boat is nice little set on its own, but also the perfect companion for the Shrimp Shack Attack set. So as I continue to review all of the new LEGO Hidden Side sets, it’s time to take a closer look at set 70419: Wrecked Shrimp Boat. 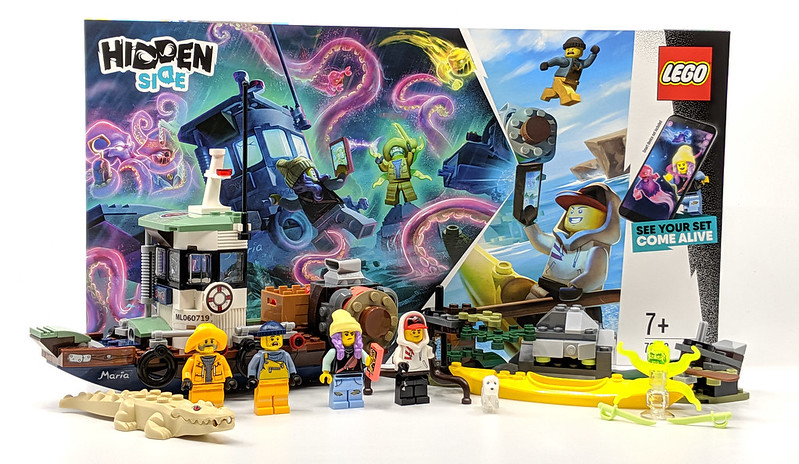 Immerse youngsters in fun ghost-catching adventures with this LEGO® Hidden Side™ 70419 Wrecked Shrimp Boat playset. This awesome playset combines a buildable LEGO model with a game app for kids to deliver a fully interactive play experience. Download the app and scan the model with a phone to make it come alive. With continuous updates, a unique boss ghost to battle in each set, new mysteries to solve, cool items to find and ghosts to defeat and collect, this LEGO Hidden Side set takes LEGO play to a new dimension! With a toy shrimp boat that splits in two and a haunted, brick-built cliff, this building toy for kids is full of cool details to kick-start hours of imaginative play. The 2 hero minifigures, haunted captain and son minifigures, cute ghost dog figure and albino alligator figure adds a lot of fun play-starters. 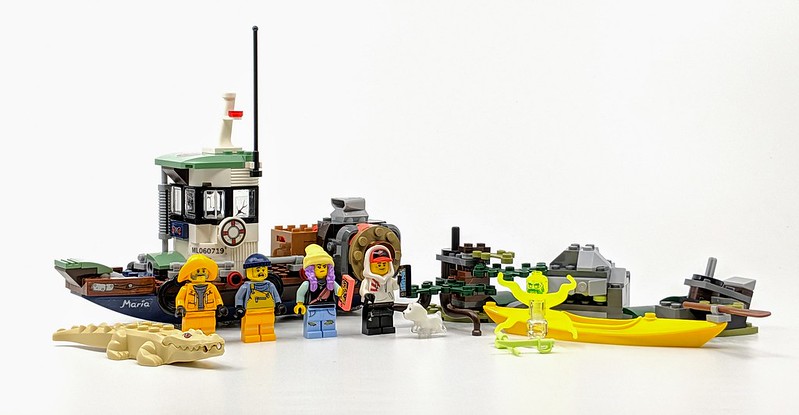 The set is split into two builds, the first of which is a rocky outcrop. Upon first look, this looks like any other rocky mass you’ll find sitting in some water. But among the rocks and trees is a spooky face. Yes a spooky faced rock may not seem that scary and it isn’t but it is still a fun little play feature. I particularly like the wayward tree roots dangling over the side of the rocks, especially as they nicely match those in the Shrimp Shack set. The gloomy face is achieved with pale green elements as they are in all the Hidden Side sets, it’s a shame these aren’t glow-in-the-dark as it would add an extra bit of fun to the sets.

You’ll notice two Technic pins either side of the rocky crop these are there to mount the accompanying Shrimp Boat. This is a fairly small vessel and a little reminiscent of the Orca from Jaws. Despite being rather small, there are some nice little details. The cabin of the boat has a little radar system and much of the outer detail is achieved with stickers. This includes a cartoon shrimp on the roof of the cabin, which matches the one found on the Shrimp Shack. 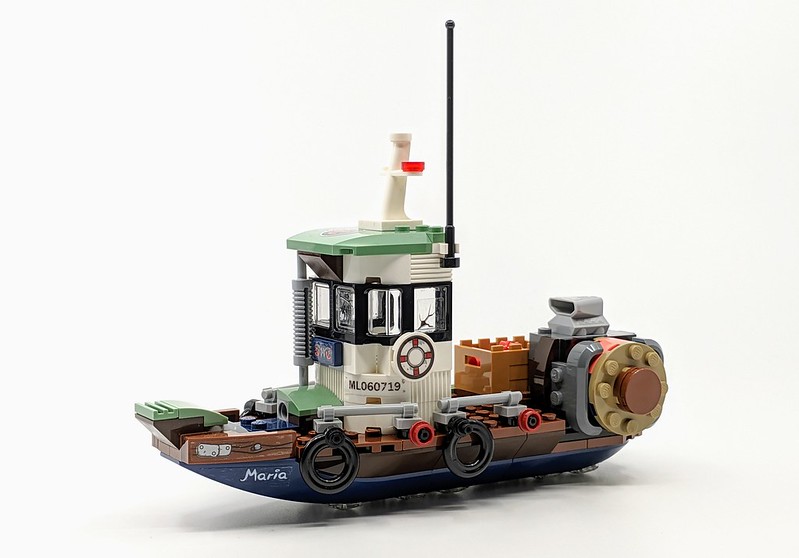 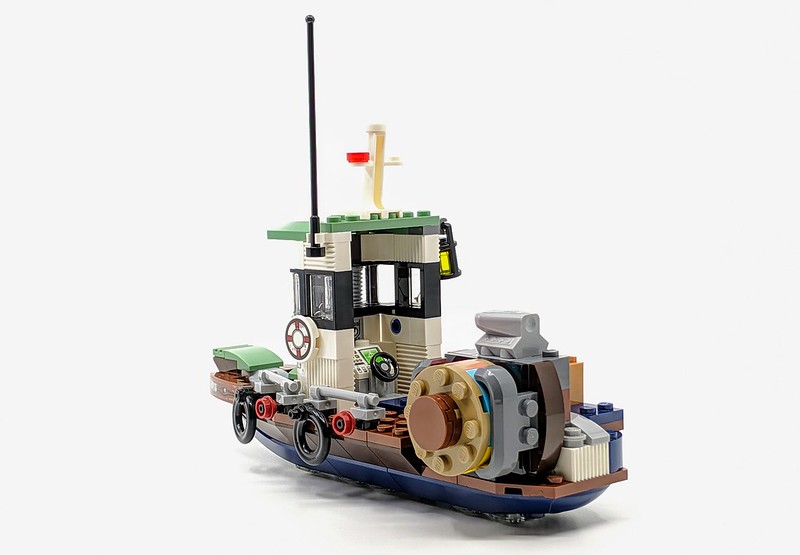 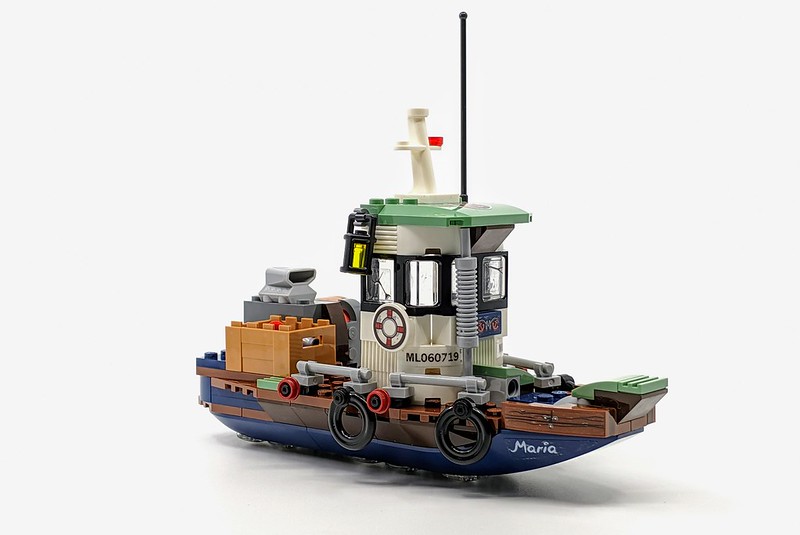 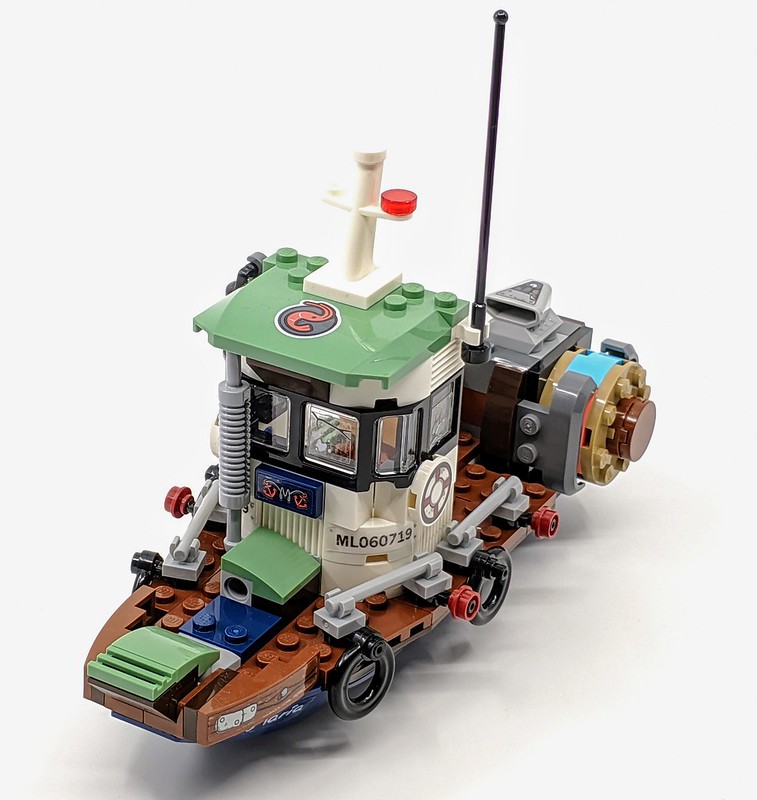 There are plenty of small bits of detail dotted around the boat, including a series of safety railings around the edge of the boat, these look nice and can easily pop off when handling the boat. Atop the cabin is a usual yet retro element. This is a antenna mast from way back in 1993. It’s the perfect elements for the set, having been mainly used on ships and boats over the years. The whole boat can be split into two sections, it kind of looks a little lazy, with just the Technic pins and holes on show. However I kind of like the simplistic nature of the split. Admittingly it doesn’t look that wrecked, although the wreckage is a little more apparent when mounted on the rocky crop. 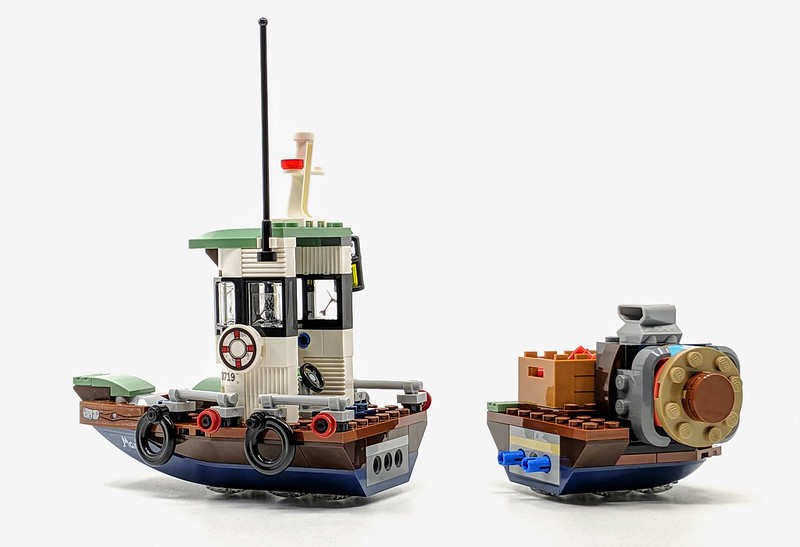 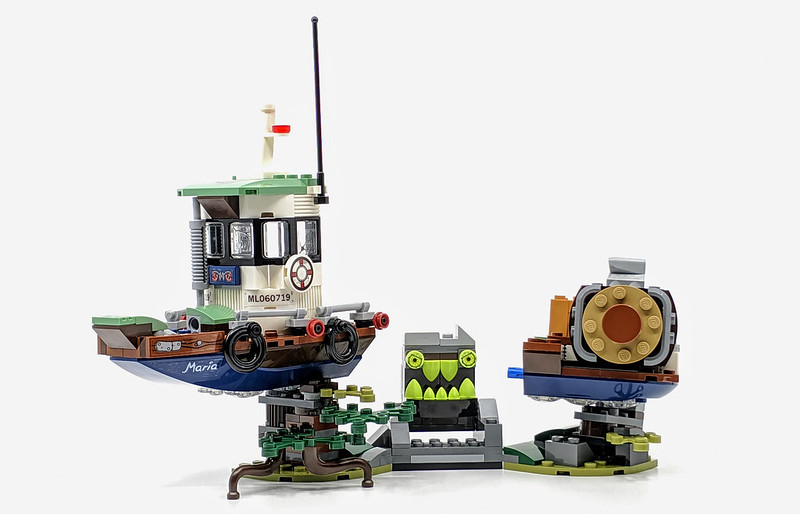 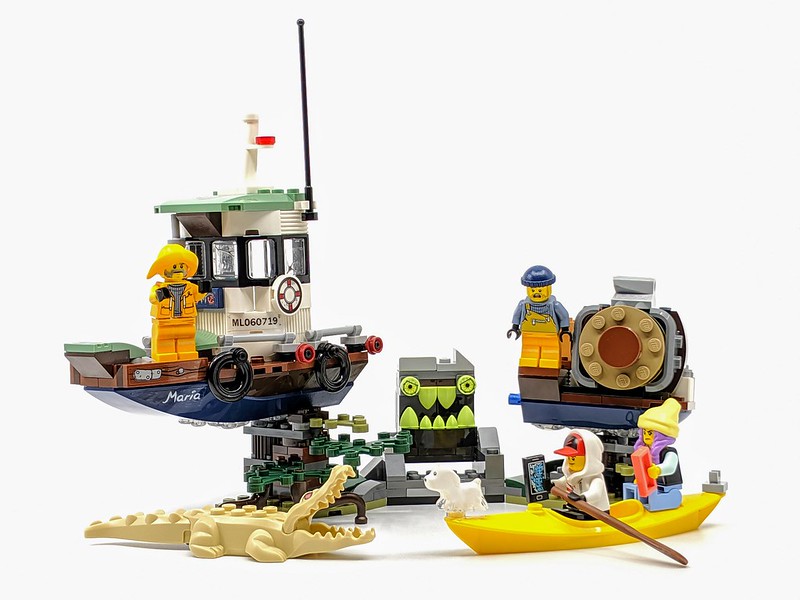 At the rear of the boat is a box of a fishy treats landed by the vessel. I really like the little shrimps achieved with a just a stud and horn element. There is also a wheel contraption which features those all-important scannable colours. Now it’s unclear what this is meant to represent, I’m guessing maybe an engine or powered trawler net. Although it doesn’t look out of place, it’s not as well incorporated into the overall build compared to other sets. 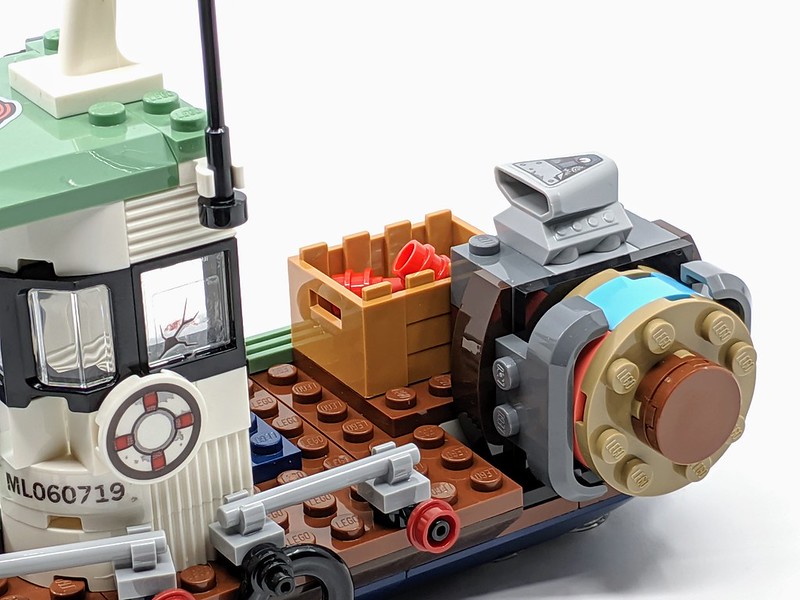 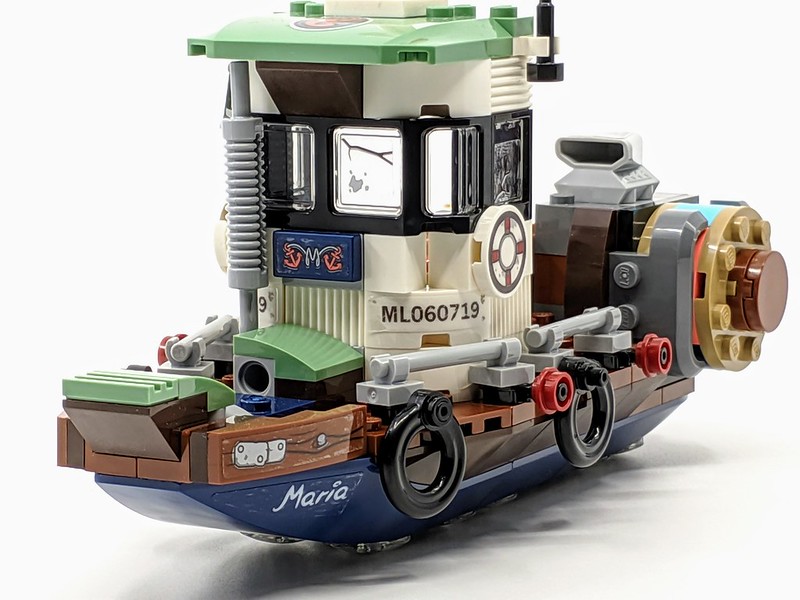 Finally the set also features two additional elements, the first is a yellow kayak. This is a fairly new element first appearing in 2017, with the yellow version appearing this year. There is enough space to fit one Minifigure in the normal place someone would sit, an additional Minifigure can be place back, which is technically the front, on the four stud area. Then we have another amazingly fun new creature element – an albino alligator. Now the parts used to create this aren’t new but these are the first time they have appeared in brick yellow. Not exactly albino but it’s still looks fairly menacing especially with the red eyes. 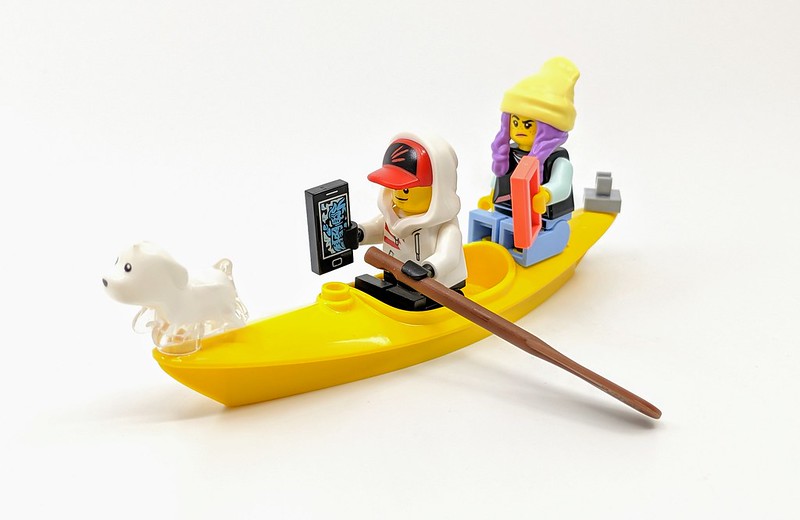 The set features four Minifigures, one Hidden Side spook and ghost dog, Spencer. Both of the Hidden Side’s main characters are once again present, with Jack kitted out in his white hoodie torso and new hooded cap element. Parker has ditched her blue jacket in favour of a black top, adorned with a bum bag or fanny pack, across her front. Compared to her other outfit, this one is a little plain looking. However I still like character design of both Jack and Parker. 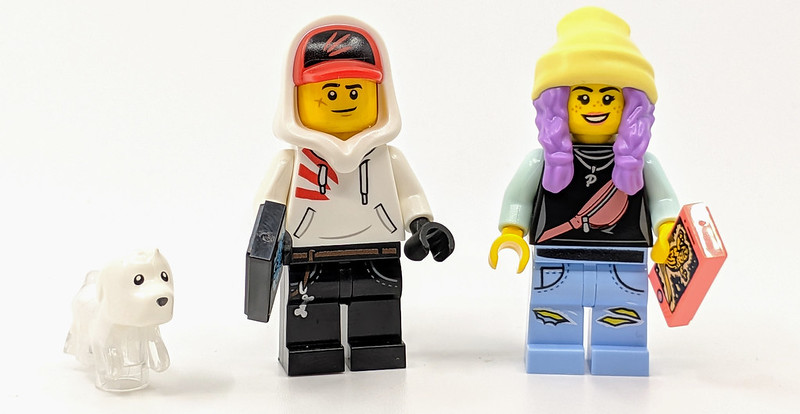 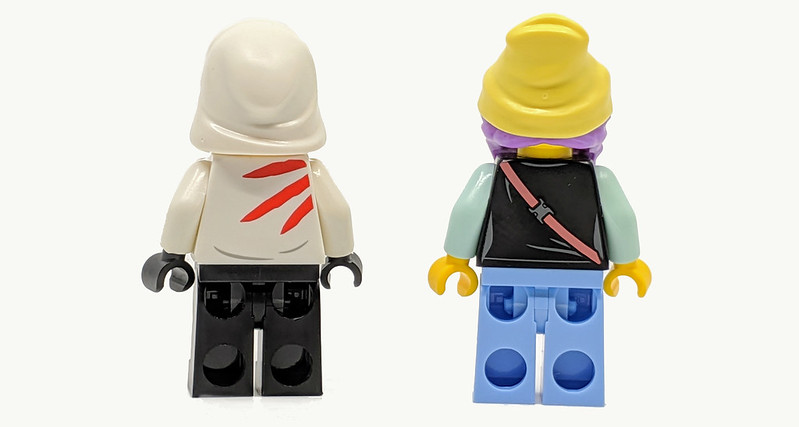 Joining the ghost hunting pair is the captain of the Shrimp Boat and his shipmate/son. Captain Jonas is a great Minifigure, thanks to the new hat element,. This is the classic fishermans hat, often seen worn by those manning fishing vessels. It looks amazing when paired up with the his yellow outfit. In fact it’s not just his hat which exclusive to his set, the torso and legs are too. His head has appeared in a few other sets, noticeably the Old Fishing Store, could it be Captain Jonas’ brother running it? It may not be clear if those two Minifigures are related, but Jonas Jr certain is. He’s the Captain’s son and although not a jazzy looking as his dad, he does have an unique torso and head, with a great expression. 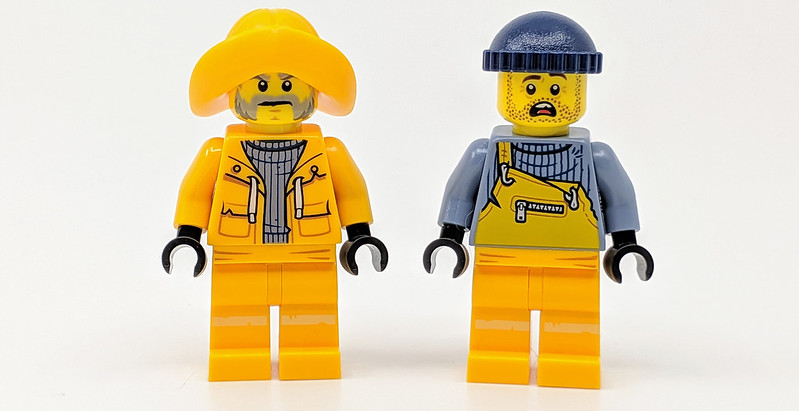 As part of the set is haunted, only one of the Minifigures has the pleasure of being Gloomed up. The honour of getting ghostly goes to Captain Jonas. A quick swap of the head and the addition of the unique tentacle element, which fits over the neck join, and Jonas is transformed into a Gloombie. He also has a pale green sword element, which acts as the sets Soul Artifact. 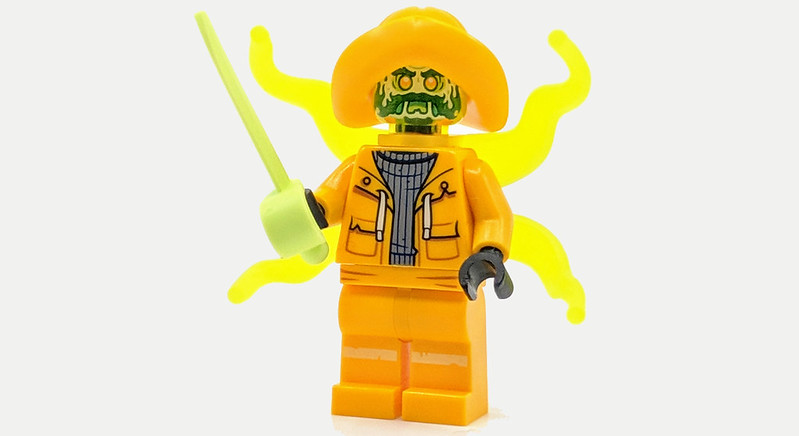 One of the additional play features of the Hidden Side sets are an AR powered game. The set is perfectly fun on its own, but you can enhance play with the addition of the LEGO Hidden Side AR app. This brings the set to life by overlaying graphics and animated elements around the physical set. Once you scan the Wrecked Shrimp boat, this suddenly comes to life in the dangerous waters of Newbury. The AR functions work well when the set is ‘stationary’ but once you take on the boss spook, the action on screen has the boat speeding along a river and the AR functions suffer a little. 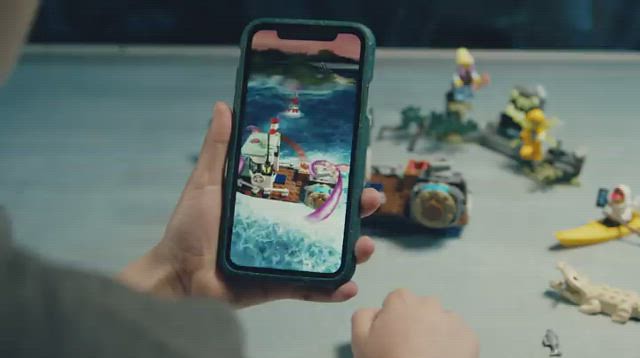 Although one of the smaller Hidden Side sets, it does have some nice little details. I’m not sure I’m a fan of the split function, although it looks a little better once mounted on the rocky outcropping. The boat does feel a little small, but for a two manned crew vessel is feels about right. I love the two seafaring Minifigures, they look great and with many others already liking its appearance to the LEGO Ideas Old Fishing Store, they are plain enough to fit in with that set and many other LEGO builds. In fact the whole set, with a little tweaking would look get next to the Ideas set. But if you prefer to keep things as they are, it’s also the perfect companion for the Shrimp Shack. 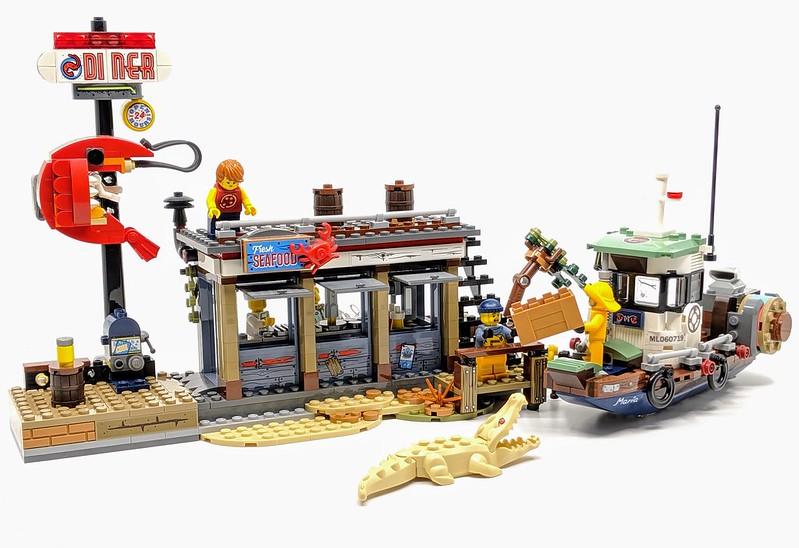