A couple of years ago LEGO® introduced People Packs. These Minifigure filled sets feature a couple of Minibuilds, accessories and of course a heck of a lot of Minifigures. There are also a great source for parts, often introducing new elements, such as the wheelchair piece from the Fun in the Park set from 2016. Since then we’ve had a beach-themed set, an great outdoors focused set and this year we are treated to not one, but two People Packs. One of which is the Fun Fair pack and the set I’ll be taking a closer look at today. The set features four main minibuilds, each connected to various fairground attractions. These include a ‘test your strength’ machine, which has a couple of cool printed pieces and partly works, as the Technic element at the bottom, can be tapped to make the 1×2 edged plated slide towards the bell. The Ice Cream bike is a brand new element, this is basically the rear end of a bicycle which can be connected to the freezer section at the front. This has a couple of great printed plates. 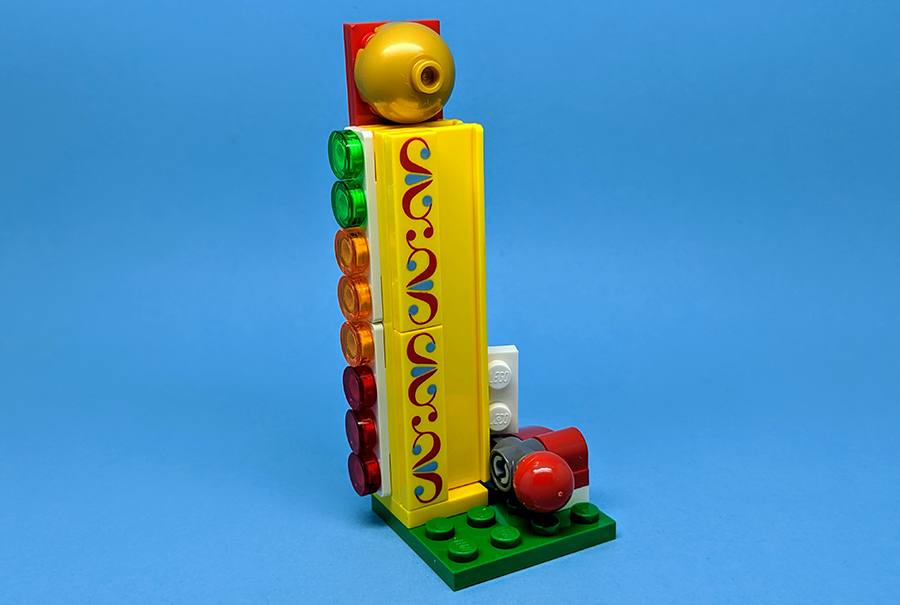 One of the best new elements in the set is the duck, and the set includes three; which are used on the ring toss game. This spins on a turntable plate. I can see the ducks being used in plenty of other sets in the future. Finally there is a water shooter game. This features three targets mounted on hinged plates and can be knocked down with the stud-firing gun. The family Minifigures all feature the same coloured hair, including a brand new element for the young girl. She also has a new torso. They are a fun bunch, especially the faces on the Mum and daughter. 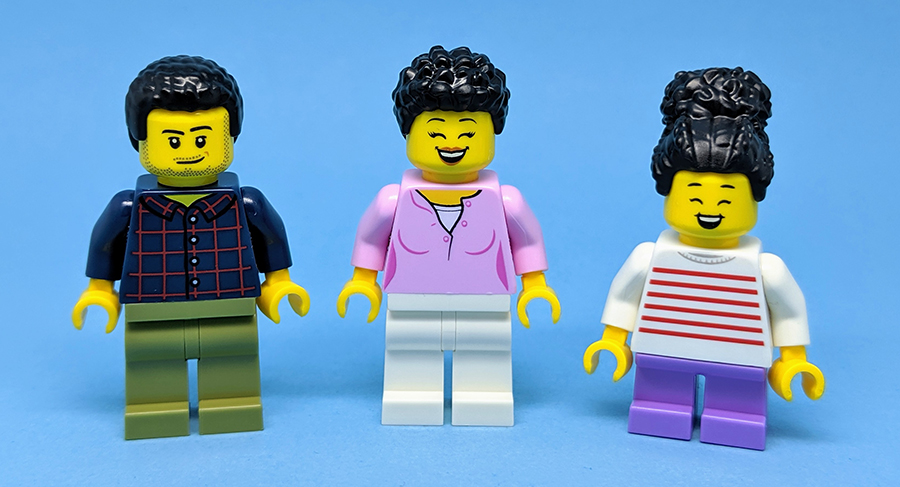 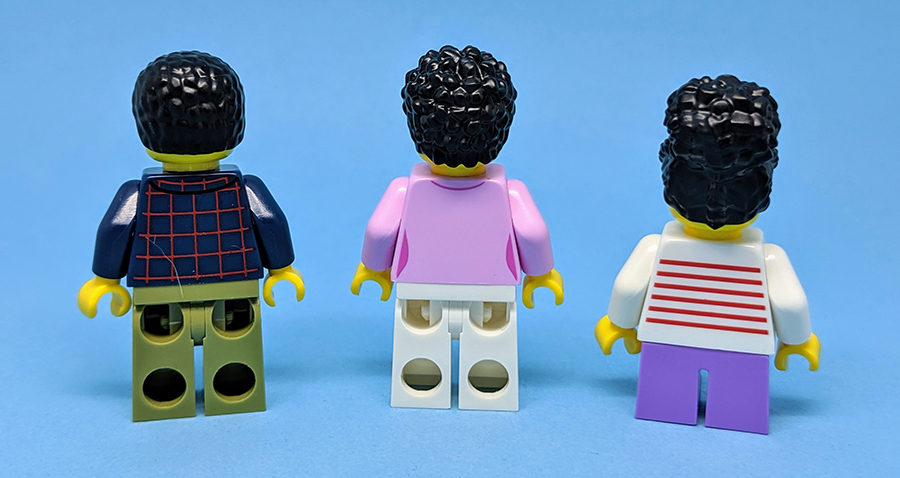 The grandparents and their grandson have a nice range of new outfits. Each of their torsos are brand new and the young boy has a interesting mix of different coloured arms, which is fairly unusual. 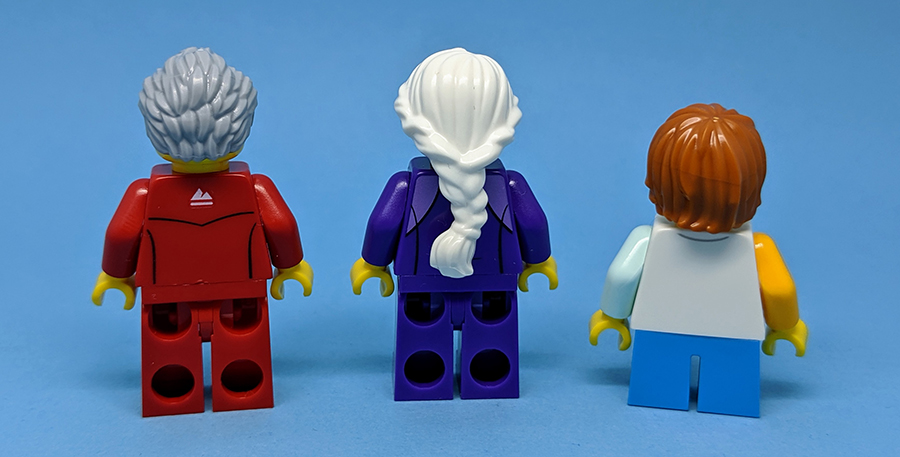 The Funfair visitors are a mixed bunch, the two adults have recoloured hair pieces. The young boy also has a new propeller element for his hat. Apart from the man’s newish torso everyone else’s clothes have been seen before. I really like the young girls tiger face paint print.

Next up are the carny folk aka the Funfair employees. The set includes four – a stilt walker, face painter, ice cream vendor and a fun fair stand worker. Between them they have a nice selection of new or recoloured torsos and hat/hair pieces. The stand attendant has a new coloured version of the Wrestling Champion’s mullet and a cool Tour short torso. The Ice Cream vendor has a new torso and a recoloured hat element. The stilt walker has a new torso and recoloured hat. Although the People Pack sets seem expensive for what they are, you do get 14 Minifigures, which are the most costly part of LEGO sets. If you compare them Collectable Minifigures, at £2.99 a pack, the People Pack actually works out decent value for money. That’s without taking into account the minibuilds as well. This particular pack has a nice selection of characters and new parts. It’s especially useful for those who have a city layout in the works and even more useful for all those Fairground sets being released this year. 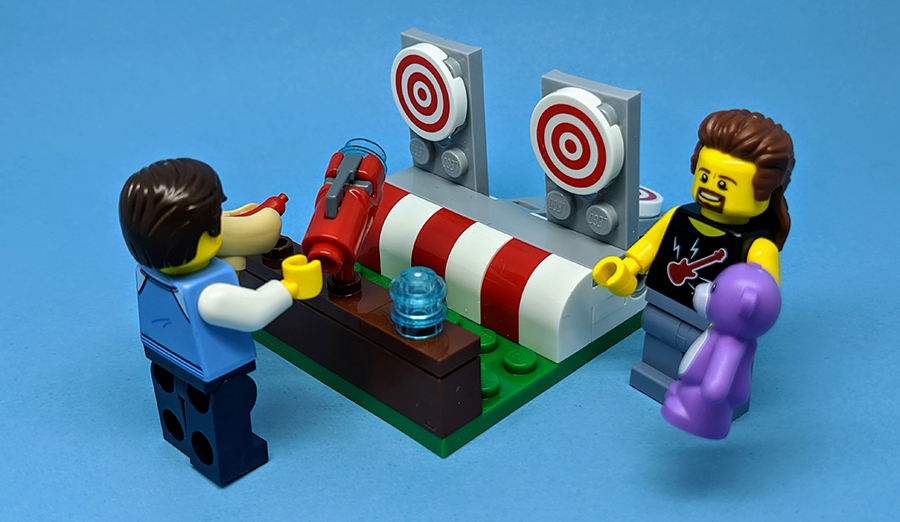