Despite the large amount of rebuildable vehicles and buildings featured in the LEGO® Creator 3-in-1 sets, every so often a creature is thrown into the mix. For the latest selection of sets that creature is a fire breathing dragon, which can be rebuilt into a Saber-toothed Tiger or a Scorpion. How does an organic creation fair against the various cars, planes and shops featured in the new 2020 range? Let’s take a look at all three of the builds from LEGO Creator 3-in-1 set 31102 and find out. 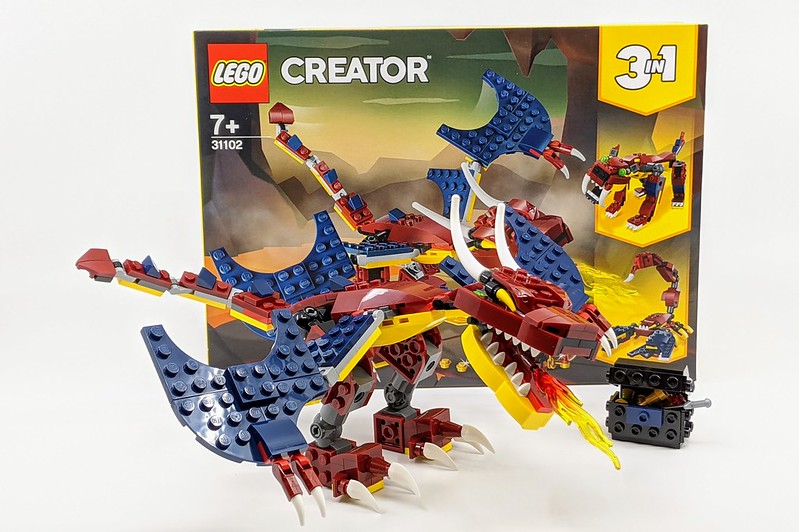 Boost kids’ love of awesome creatures and their creativity with the LEGO® Creator 3in1 Fire Dragon (31102) set. Children love playing with this fearsome, fire-breathing dragon toy with posable head, jaw, legs, tail, wings and claws, plus an opening treasure chest with assorted elements. Build-and-play freedom Kids get the joy and fun of 3 different build-and-play experiences in 1 with this LEGO Creator 3in1 set. They can build a fire dragon and then rebuild it into a saber-toothed tiger with posable limbs, head and jaw, a Scorpion with posable legs and claws, or dream up something completely new. This building toy encourages imaginative play and makes a great all-occasion gift for kids. Well-known models based in fantasy and reality LEGO Creator 3in1 sets offer kids toys that are wonderfully detailed, tap into different passion points and spark imaginative play. The models offer endless building and play opportunities while helping to drive creativity in children of all ages. 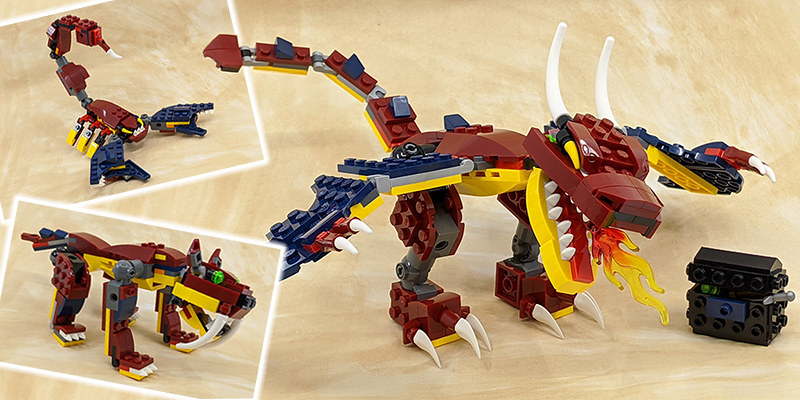 Dragons appear to be the go to creatures for LEGO Creator. In the last 5 years there has been 2 different 3-in-1 sets to feature a dragon, one of those even has a scorpion as an alternative build. However this is not a remake of any of those sets, but it does share some similarities. The overall look and build has enough differences compared to those, in particular the use of elements. There are no new ones, but plenty of recolours and more than enough of them are fairly rare. For example the Earth Blue arches used on the wings are only found in a couple of other sets, you get 8 of them here. The wings are one of the builds best features, as they are double-jointed they can be posed in independently and those Earth Blue arches give them a unique look. I also like the head and in particular how the jaw is crafted. A bar element is used for the connection point, which allows for a bigger mouth, but it keeps the sturdiness of smaller hinged joints. 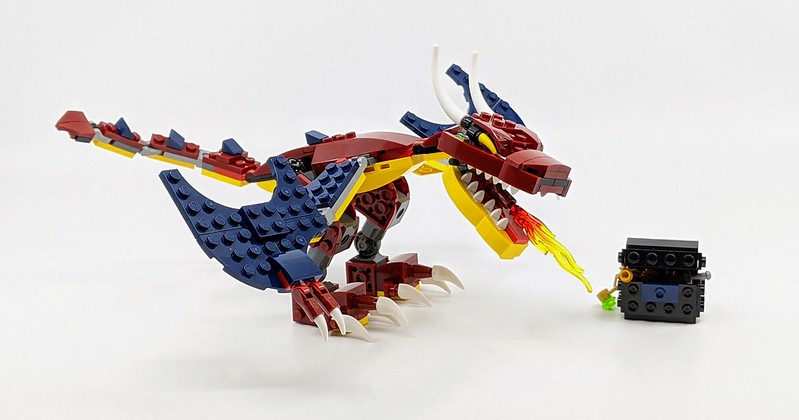 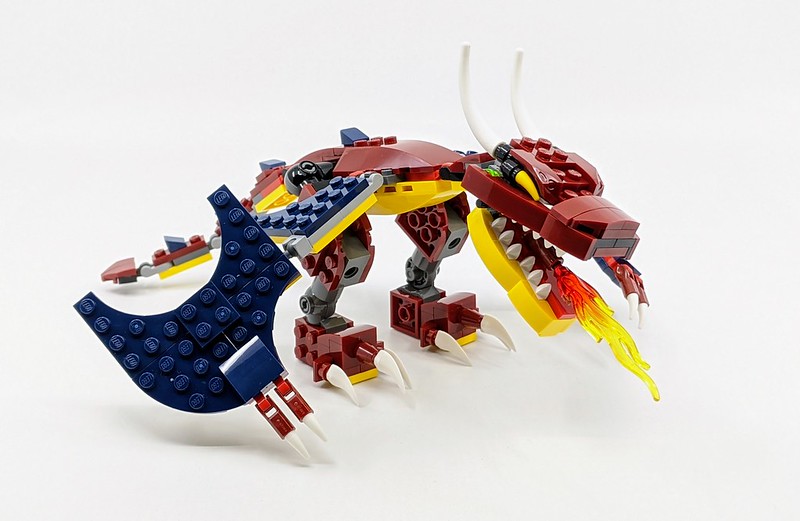 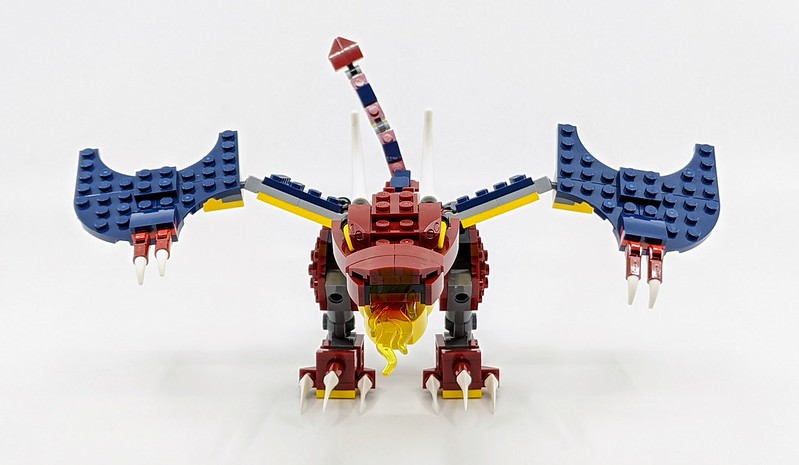 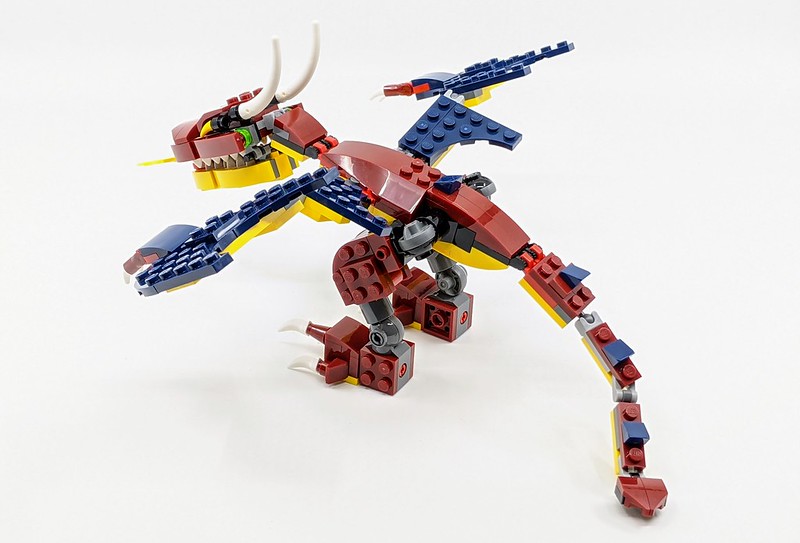 It is a well-known fact that 8 out of 10 dragons prefer treasure to most other worldly goods, which is why a chest of jewels and gold is included. This may only be a small part of the overall build but I quite like that it is brick-built. There is a chest element, which could have easily been included. But it couldn’t have looked as good or given the set a handful of additional elements to use elsewhere. Plus the various angle plates, with their hollow studs, give it a ancient, medieval look. 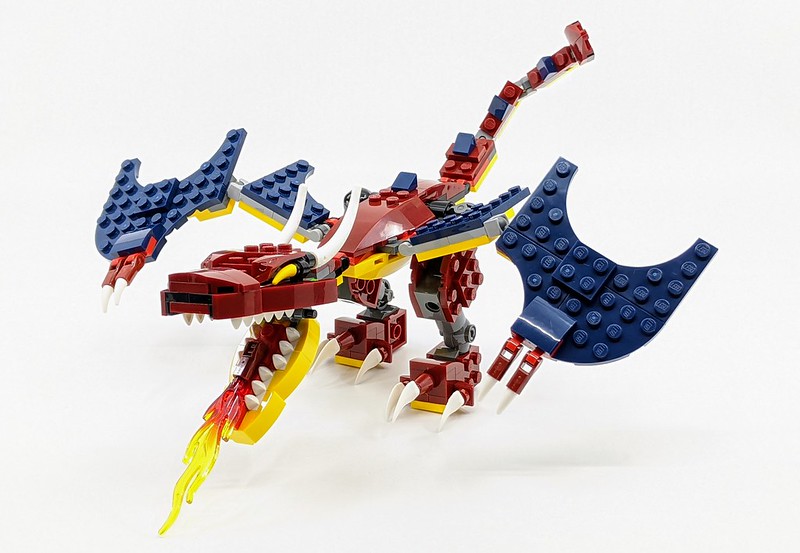 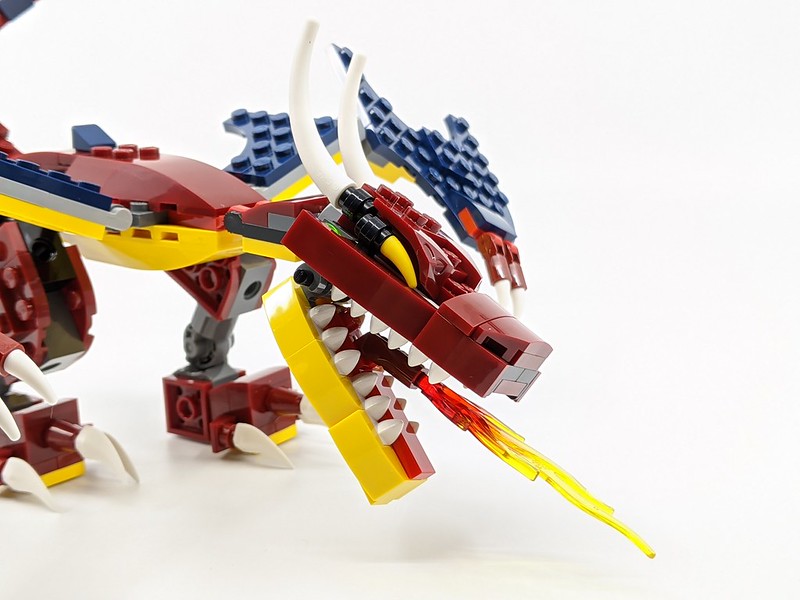 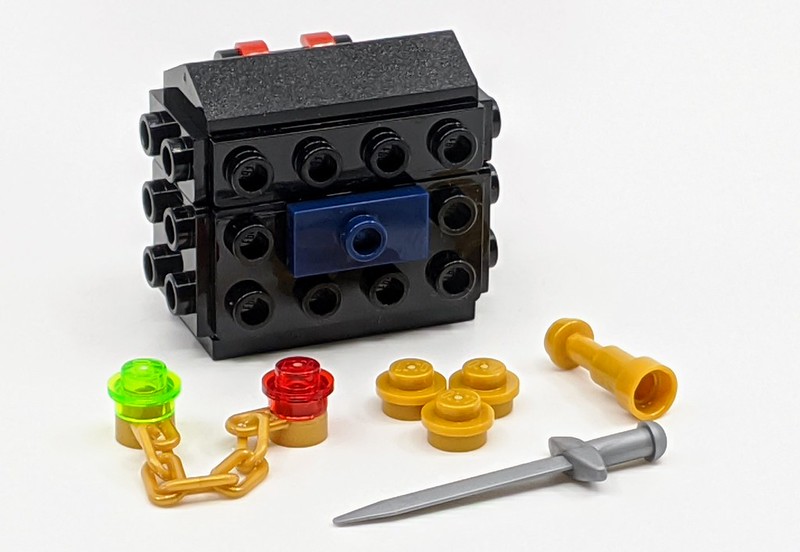 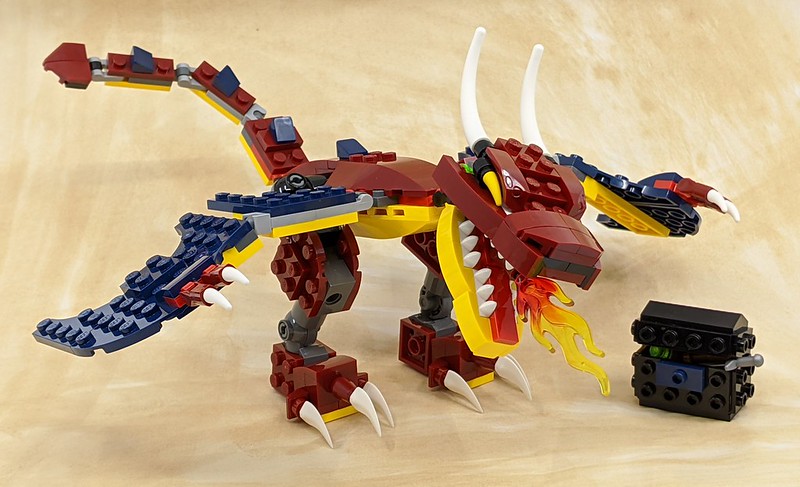 What could be more fearsome than a tiger with massive spear-like front teeth. Nothing much to be fair unfortunately it doesn’t result in an great looking LEGO build. The brick-built big cat is a decent enough take of this pre-historic beastie, but there are a few design choices which let it down ever so slightly. For me the tail is fair too short and the green eyes look a little out of place. After all this is a creature which has existed, unlike the dragon. No I’m not expected a completely accurate build, but these little things could have been addressed, especially since the alternate builds done use all the pieces from the lead model. So there were enough pieces to extend the tail a little longer than it is. However the Saber-toothed Tiger hasn’t really appeared in LEGO form much, especially compared to the other too creatures here, so it’s nice to have a different beast to build; in place of a rehashed one from before. 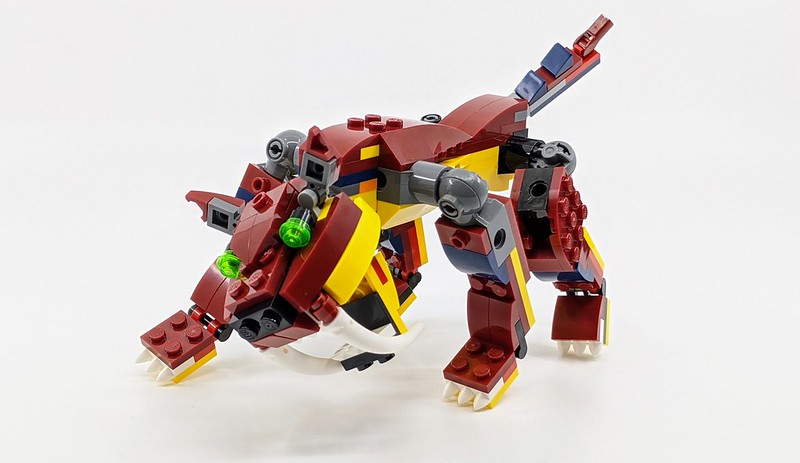 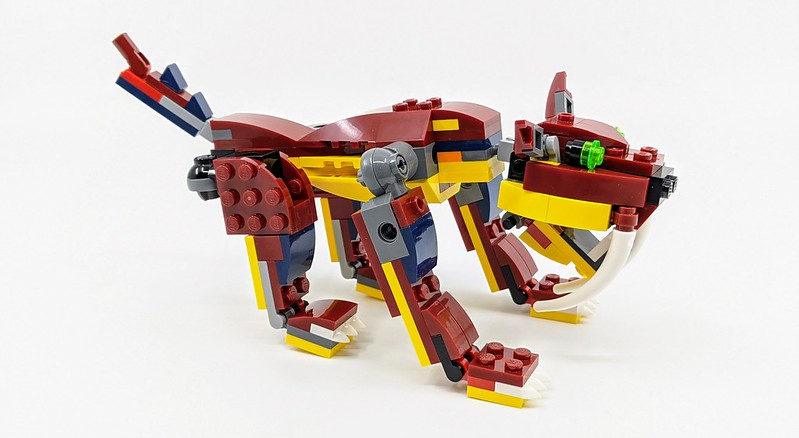 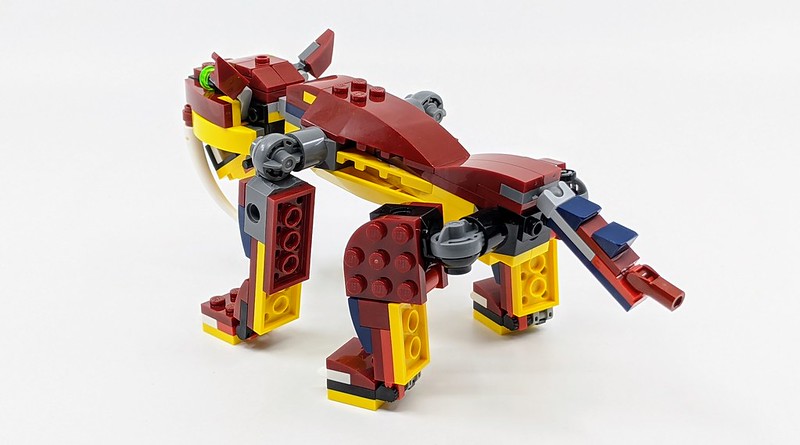 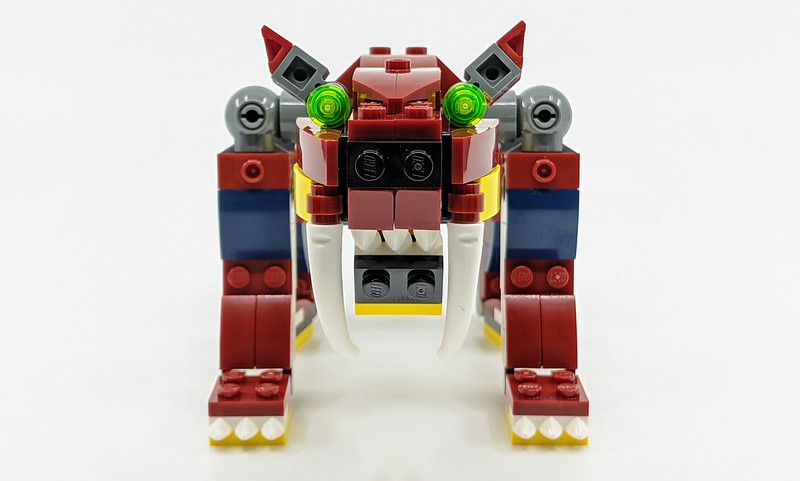 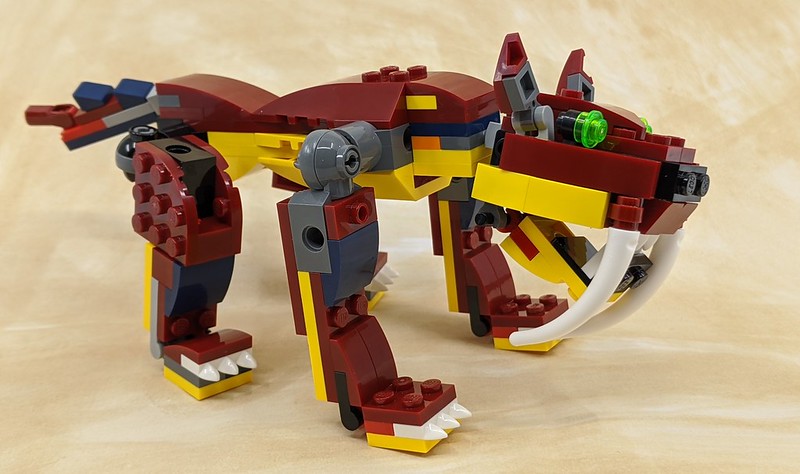 As insects go, the scorpion is one of the most deadly and cool looking. It’s also a great creature to recreate with LEGO. Although the build doesn’t use all the elements from the lead model, the pieces it does use, result in a great looking model. In fact it is the best of the three builds in my opinion. I love how the claws have been achieved which the Earth Blue arches and they connected in such a way as to allow for some great posing opportunities. The head and legs are quite small but they both work amazingly well, in the overall appearance of the scorpion. Even with the larger claws and tail, it’s well balanced. If you compare this the scorpion from a few years ago, this is 100% better. Better use of parts and a better looking build. 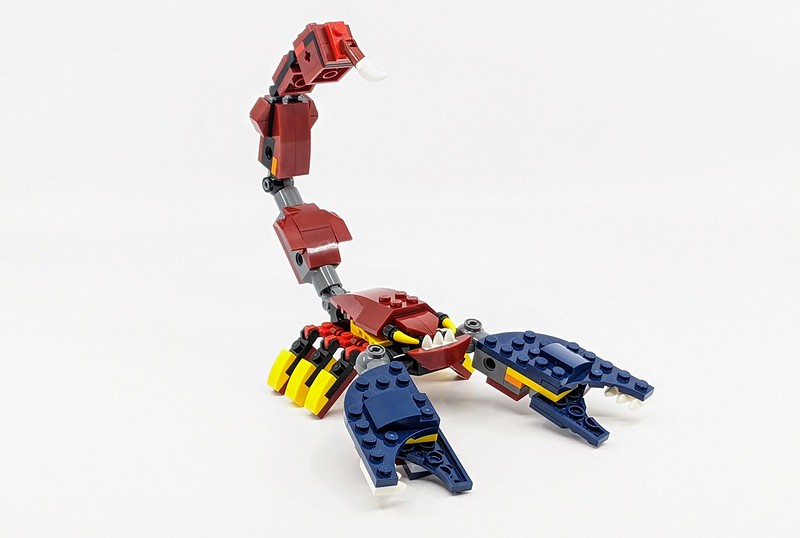 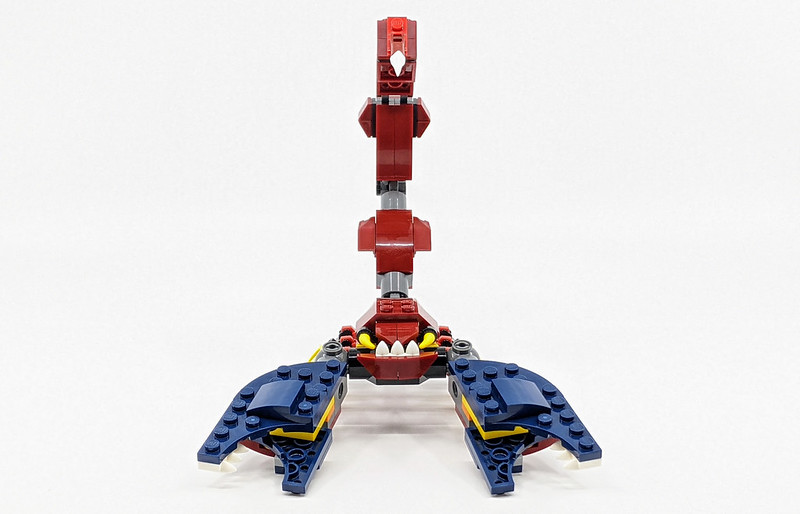 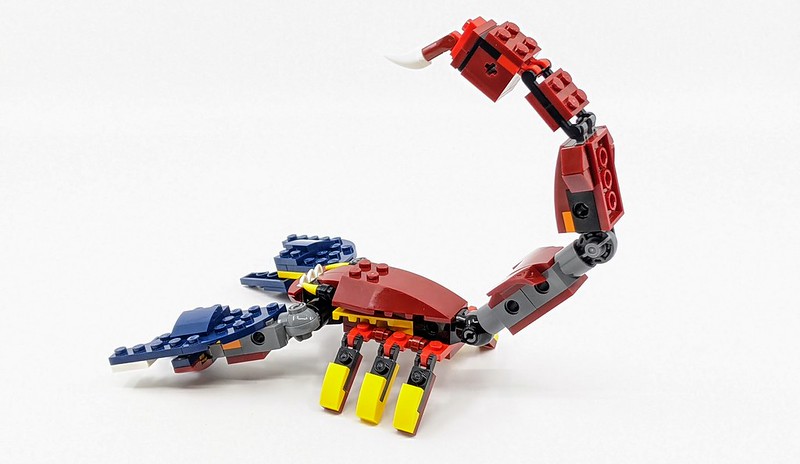 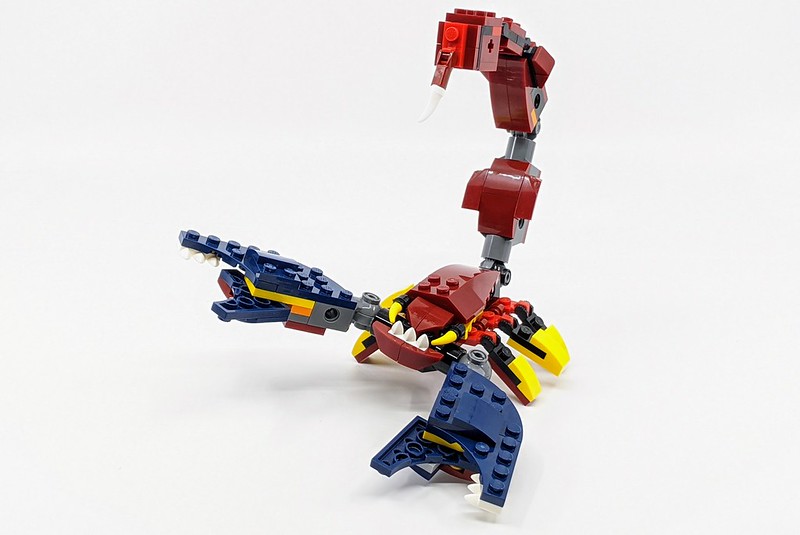 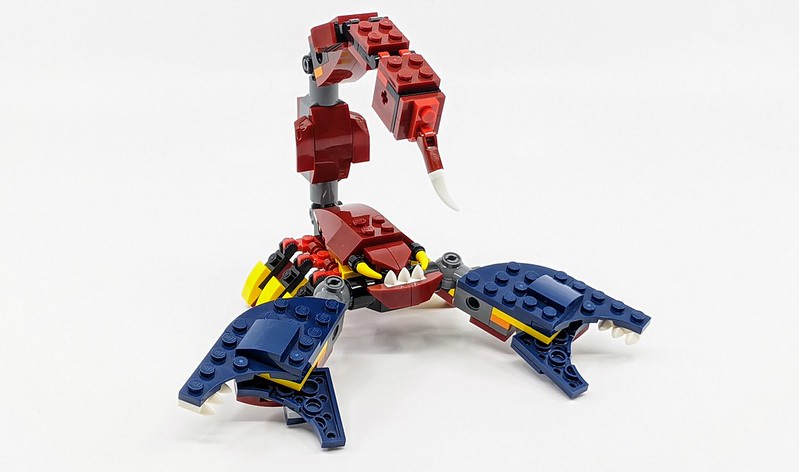 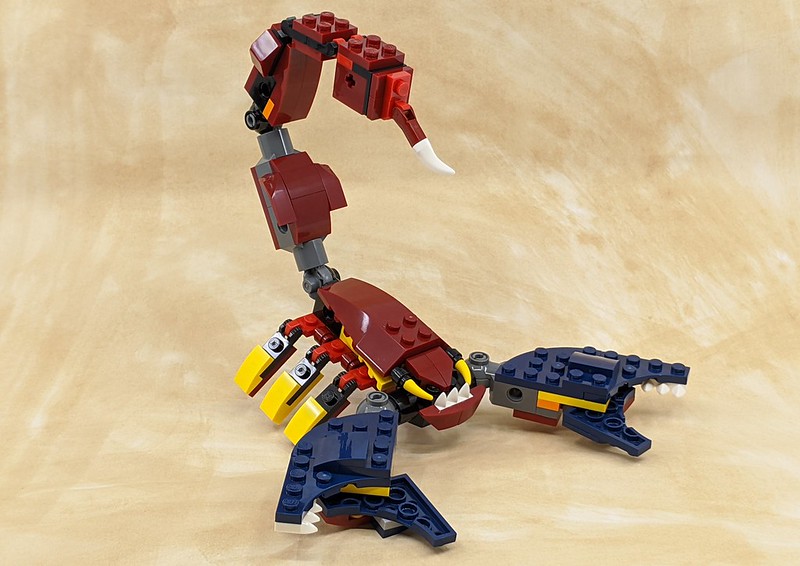 Creating creatures or organic things with LEGO bricks doesn’t always result in a decent looking build. But most of the creatures featured in this set are pretty cool. My favourite has to be the Scorpion, it has so many moving parts, you can get so nice poses out of it. The Dragon is a nice build, although it looks a little too similar to past Creator 3-in-1 sets. The Saber-toothed Tiger for me, is the weakest of the three builds. That’s not to say it’s bad, but it’s not as good as the other two. Another thing is the pricing, if this set is compared to other similar creature sets from the last few years, the piece count is almost the same but the price has leaped up quite a lot. Still it makes a nice change to have something a little different to all the vehicles and odd building often found in the Creator 3-in-1 sets.